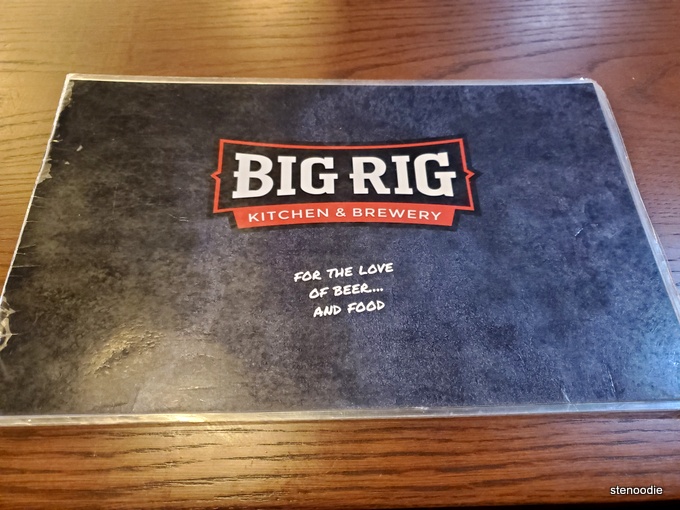 This was a really disappointing dinner.  We planned to go out for dinner to semi-celebrate the one-year anniversary of us purchasing our house, and DH selected The Big Rig Kitchen & Brewery.  We both looked at the menu online first and were impressed with the selection of items as well as the prices.  The prices were quite decent for a western restaurant (considering that inflation has made everything go up and most burgers are at least $18 nowadays).  We even wrote down what we wanted to order on a slip of paper so that it would eliminate waiting time when we got to the restaurant. 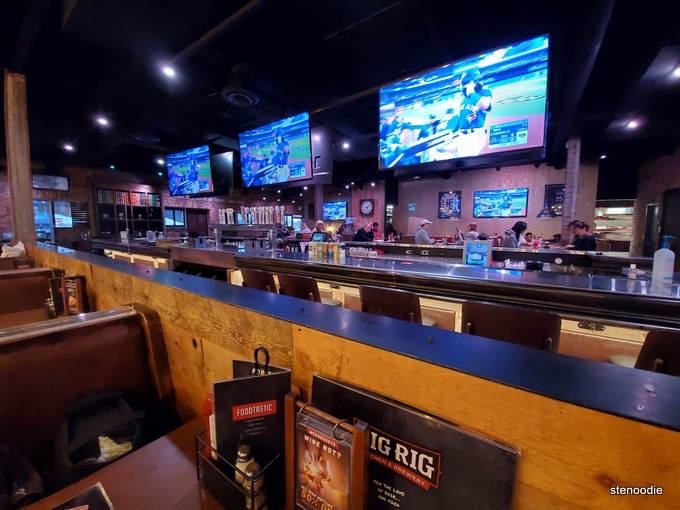 The Big Rig Kitchen & Brewery is located in a cluster of other restaurants in the Highway 7 and 404 area at 125 York Blvd, Unit 135 in Richmond Hill.  We arrived at 6:30 and were lucky to find a parking spot close by.  It was a Saturday night and it is usually difficult to find a parking spot in this complex.

When we entered the restaurant, I was reminded of another restaurant that had the same layout.  It turns out that I was correct and this used to be The 3 Brewers (blogged about here).  There were two servers standing at the hostess table chatting away and it took them about 10 seconds to finish chatting before they acknowledged us.  We were given a big booth table.  It could probably seat six people but was enough for the four of us.  It is a bit of a tight fit though and if you drop anything on the floor (like I did later on in the evening, good luck crouching down to fetch it — the table is really high up from the floor).

It wasn’t a server who attended us but a gentleman who looked like he might have been the manager or owner.  We gave him our slip of paper with our orders and he gladly took it, clarified some sides, and then we waited for our food.  The toddler was given two crayons and a paper place mat for drawing and colouring. 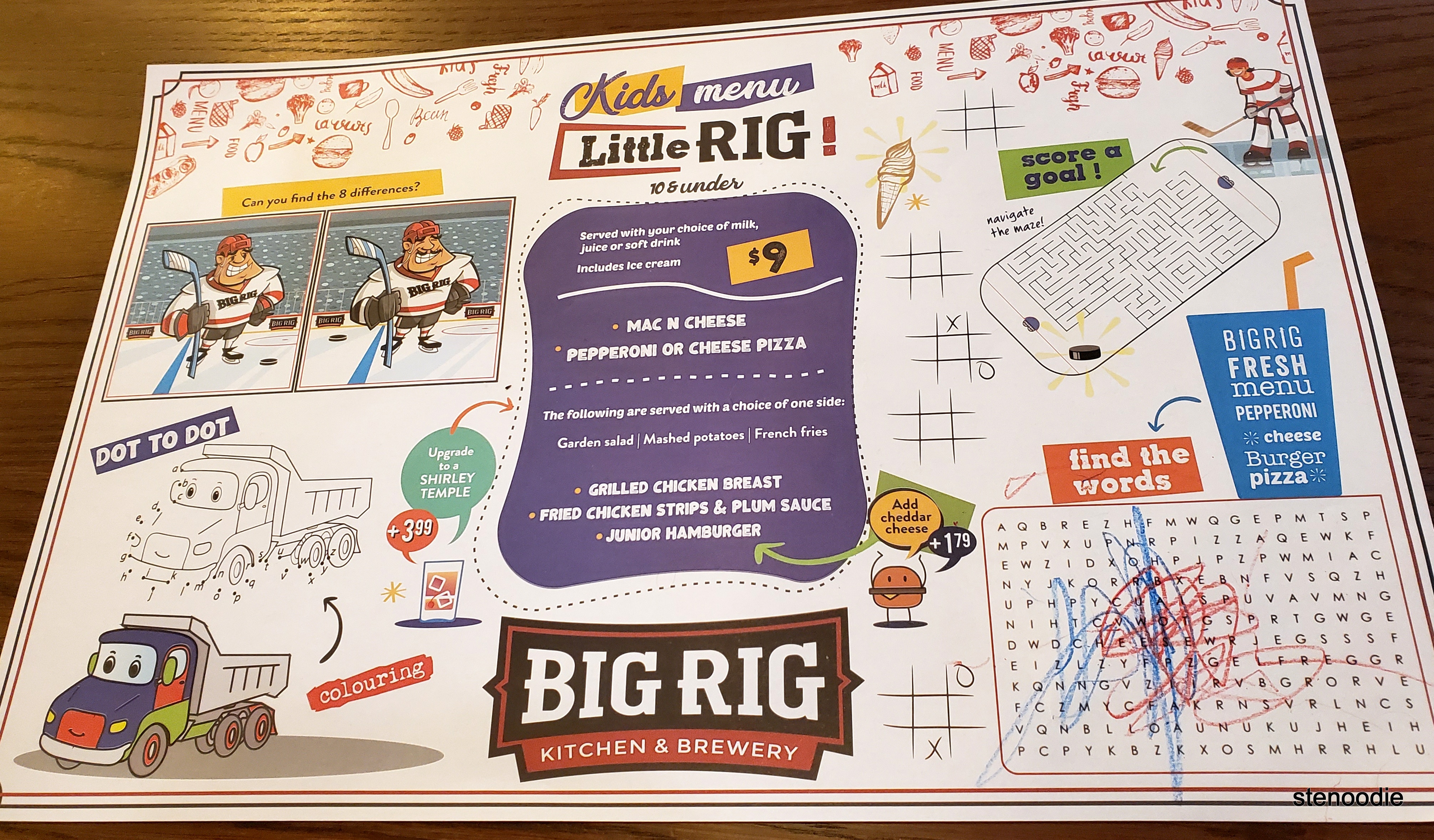 The Big Rig Kitchen & Brewery consists of a dining room area and a brewery area with plenty of beers on tap.  There were dozens of flat screen TVs showing the current games. 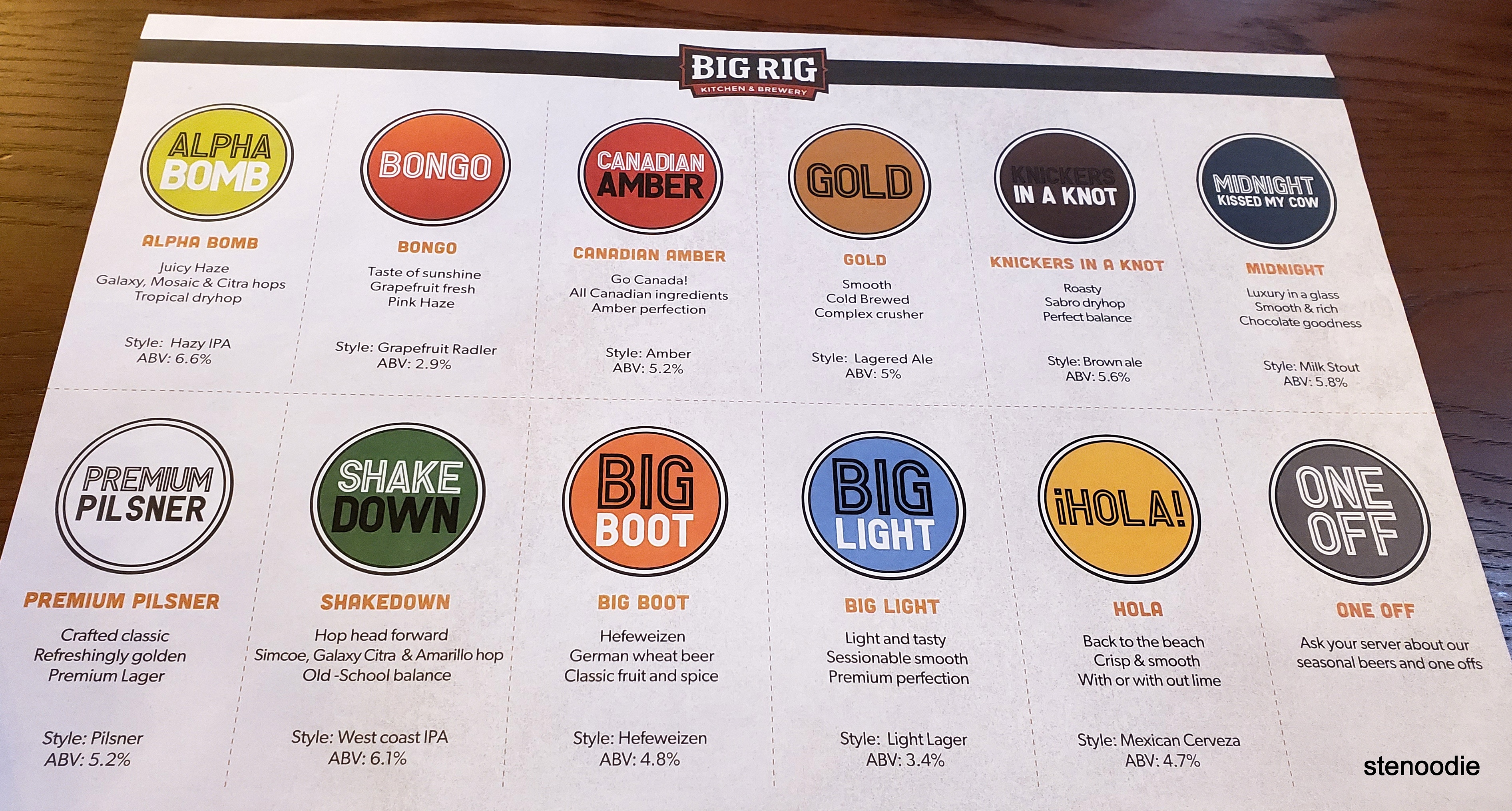 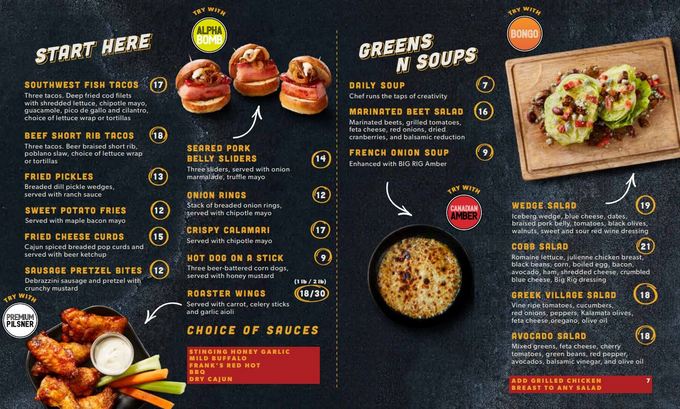 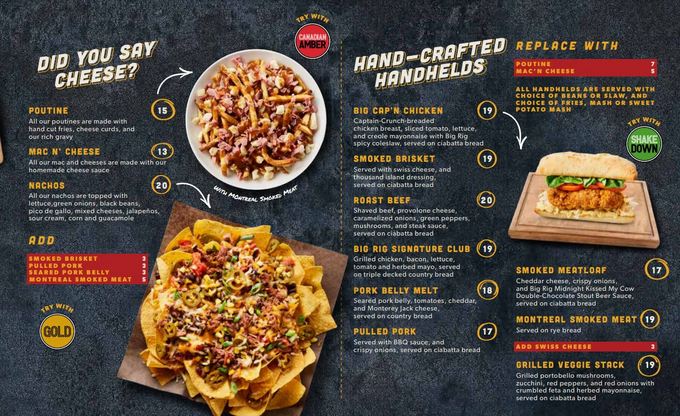 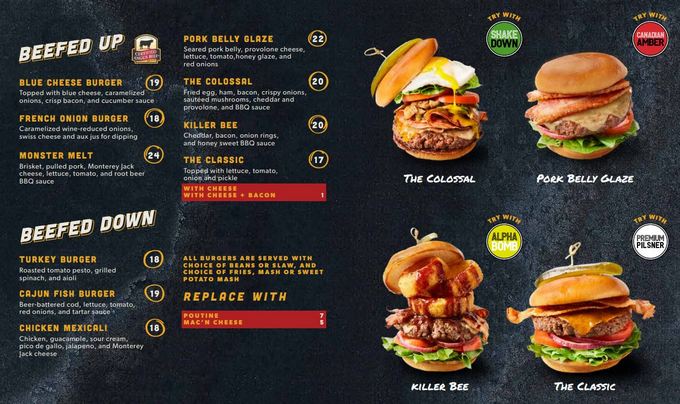 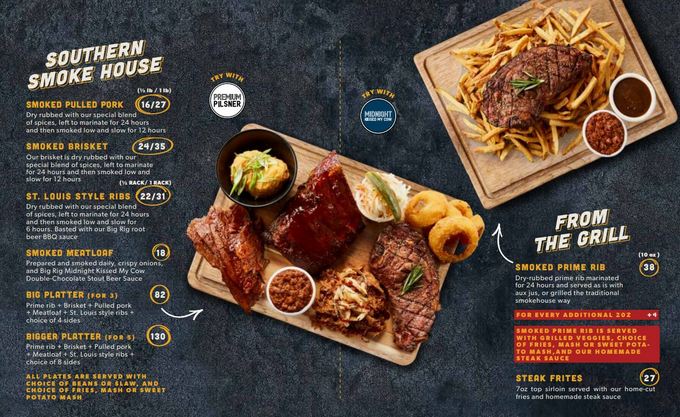 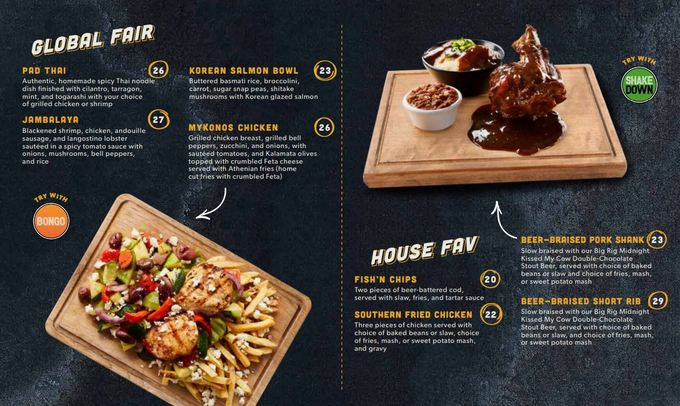 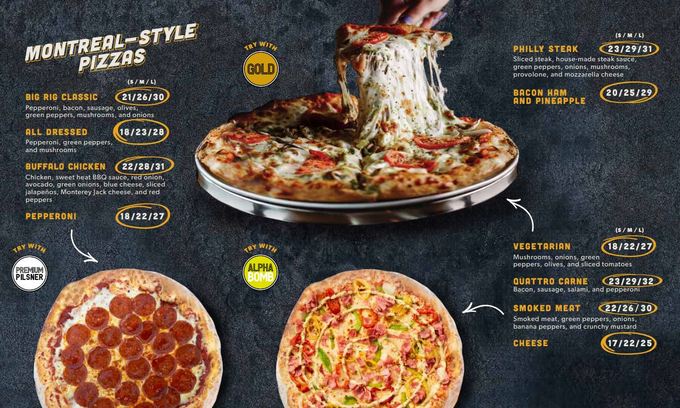 It took about 15 minutes for the food to arrive and everything arrived at the same time.  Upon knowing that we were going to share all the dishes, the gentleman switched out the smaller sharing plates for larger ones.  This was thoughtful and much appreciated. 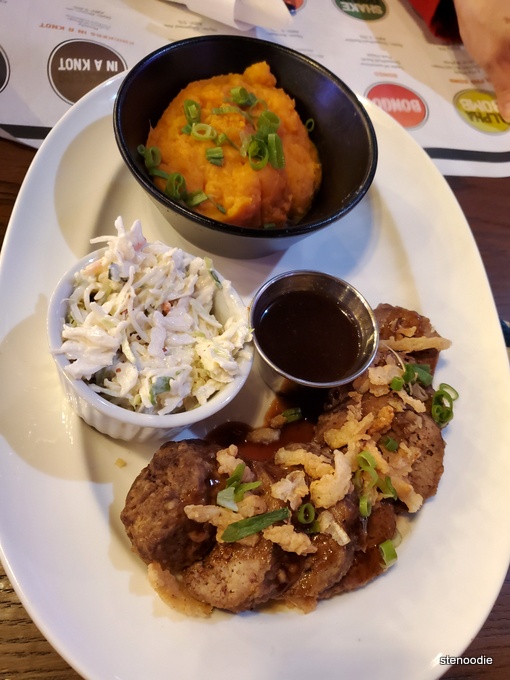 At first sight, I was already unimpressed and disappointed with the size of the Smoked Meatloaf Stack ($18).  As per the menu, it stated it was:  “prepared and smoked daily, crispy onions, and Big Rig Midnight Kissed My Cow Double-Chocolate Stout Beer Sauce”.  For $18 for a main, this was very affordable but the size of it was sorely lacking.  The meatloaf was actually cut in big rounds and staggered on the plate.  The meatloaf was dry, lean, and didn’t taste like much.  I was expecting a healthy generous portion of fatty savory meatloaf and didn’t get that on the plate at all.  The beer sauce on the side was a little sweet and not noteworthy.  The two sides were quite generous though.  The sweet mash was smooth and tasty and the slaw was good too. 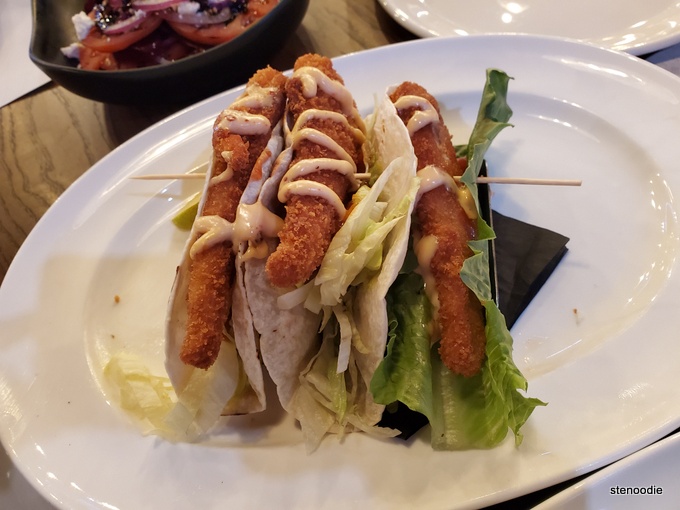 The Southwest Fish Tacos ($17) came in three.  They contained deep fried cod filets with shredded lettuce, chipotle mayo, guacamole, pico de gallo, and cilantro.  You could choose between lettuce wrap or tortillas.  I had asked for the tacos to have one in lettuce wrap and the two in tortillas, which the kitchen did.  The deep fried cod filets were quite small and skinny and weren’t very substantial.  The one in lettuce wrap was even more flimsy and the lettuce was wilted and soft.  It tasted all right, especially with the smooth guacamole.  But in hindsight, this could have been a much better fish taco. 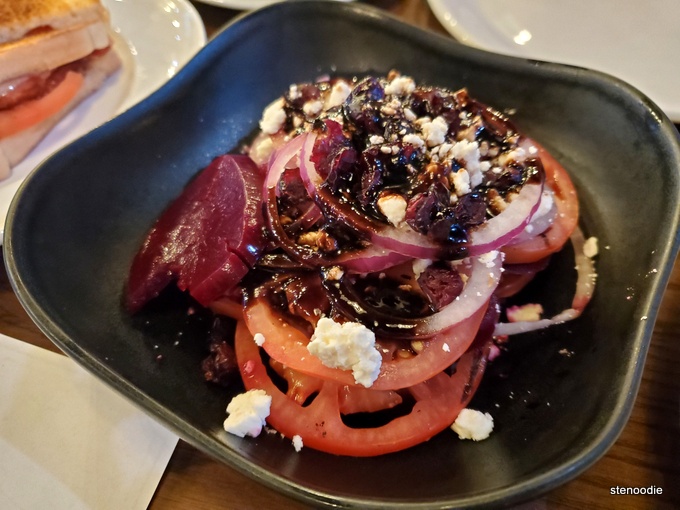 The Marinated Beet Salad ($16) was one of the better dishes that night.  It had marinated beets, grilled tomatoes, feta cheese, red onions, dried cranberries, and a balsamic reduction.  The portion for this was fair for a salad and there were lots of large slices of marinated beets.  The balsamic reduction was very strong, making it a very tangy salad that opens up your appetite. 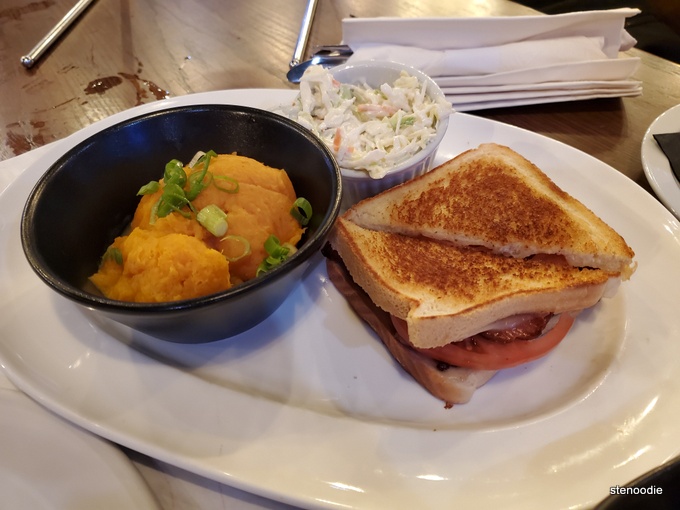 The worst dish of the night was from the “Hand-Crafted Handhelds” section of the menu.  In the menu photos, these sandwiches looked amazing and so appealing.  We chose the Pork Belly Melt ($18), which consisted of seared pork belly, tomatoes, cheddar, Monterey Jack cheese, served on country bread.  We were a little shocked when laying eyes on this sandwich.  It absolutely looked like something we could whip up from our own kitchen in two minutes.  The country bread was nothing more than white bread with toast marks on it.  The sandwich was so flat, as flat as the baseball field that the Jays were playing on that night.  It barely looked like there was anything in between the two pieces of bread.  It also was accompanied with two sides of our choice (the same sweet mash and slaw that we had chosen for the Meatloaf dish).

Tastewise, this Pork Belly Melt just tasted like hard bacon pieces and a slice of tomato slapped between two buttered slices of toast.  It was terrible and insulting that we were to pay $18 for this so-called “hand-crafted handheld”.  We waited for the gentleman/server to come around so we could ask about this atrocity but no one came to ask us “How are you doing?” at all. 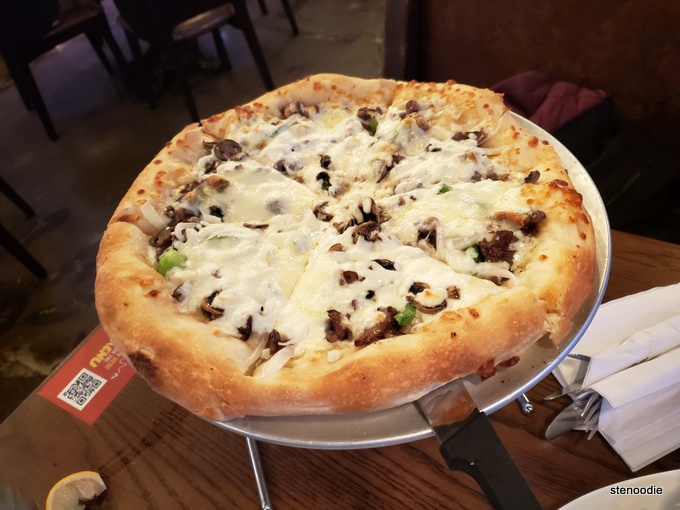 Lastly, we also ordered the Montreal-Style pizza, the Philly Steak Pizza (medium size, $29).  It had sliced steak, housemade steak sauce, green peppers, onions, mushrooms, provolone, and mozzarella cheese.  This was served on a metal topper which had it towering above the other dishes (it reminded me of a similar metal topper that Mattarello used for their pizza but which was less sturdy).  This was also disappointing because it tasted like a vegetarian pizza.  There was barely any sliced steak in it!  I expected a Philly Steak pizza to be gooey with cheese and rich with loose slices of meaty steak.  This was just a vegetarian pizza with the least amount of meat on it.  I couldn’t believe how disappointing this pizza was.

Like I mentioned, no one came to our table to ask us how the food was.  We were ready to express our concern about the flat Pork Belly Melt but we weren’t even given that opportunity to.  And while we could have waved someone down to complain, we didn’t do that because we thought someone was going to come by.  It finally wasn’t until we were all mostly finished the food that the gentleman did come by to collect our empty plates and ask if everything was good.  It was too late at that time.

All I have to say about this restaurant is that they made a really good choice in choosing the food stylist and food photographer for their menu.  The beautifully designed menu completely fooled us.  All of the photos on the menu looked spectacular and absolutely did not reflect what we received in real life for dinner that night at The Big Rig.  The service also was poor since no one cared to check up on us or refill our waters.

When we asked for the bill and were paying, the gentleman did ask us if we wanted ice cream on the house for the little one, but we were just ready to leave at that point and declined his offer.

It’s so disappointing that this chain restaurant did not serve good food.  One could say that we ordered the “wrong” dishes to try, but of the five items we ordered, when three to four of them are subpar — only ONE was acceptable –, then you’ve kind of got your answer already.