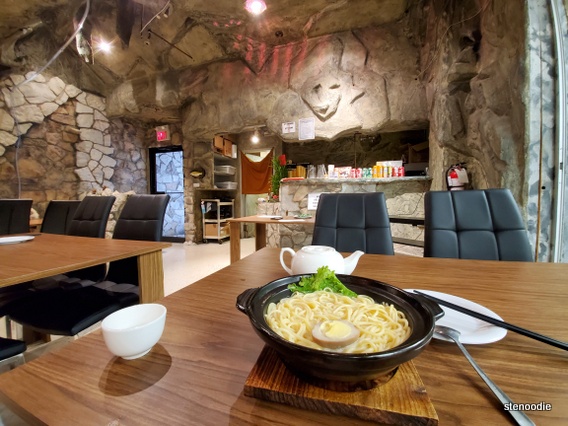 The name of this restaurant is 奇味鸡煲 in Chinese and is phonetically translated as “Qi Wei Ji Bao” in Mandarin.  It’s located inside of New Century Plaza (398 Ferrier St, Unit 60) on a side street near Steeles Avenue and Warden Avenue in Markham.

After my facial, I was starving and I wanted soup noodles.  I also didn’t want to exit the plaza and drive elsewhere because I was already famished.  Thus, I knew that Qi Wei Ji Bao had taken over the previous mellow Chinese restaurant called “Grotto Noodle House” but had yet to try its new occupant.  Qi Wei Ji Bao is the only other restaurant located inside of the New Century Plaza other than the Chinese restaurant.

I walked over to where the restaurant was (it still has the old aesthetics of the old restaurant with the “grotto” decor).  I tried to look at the menu by hovering outside the restaurant and saw a pile of papers on a table.  It didn’t look like they served bowls of noodles though.  I was about to do a U-turn and exit the plaza, but one of the staff members saw me and asked me what I wanted.  I asked them if they had any noodles.  He only spoke Mandarin to me even though I addressed him in Cantonese and English.  Luckily, my Mandarin is good enough that I kind of knew what he was talking about.  He pointed to a single dish on the menu which was a casserole noodle dish. 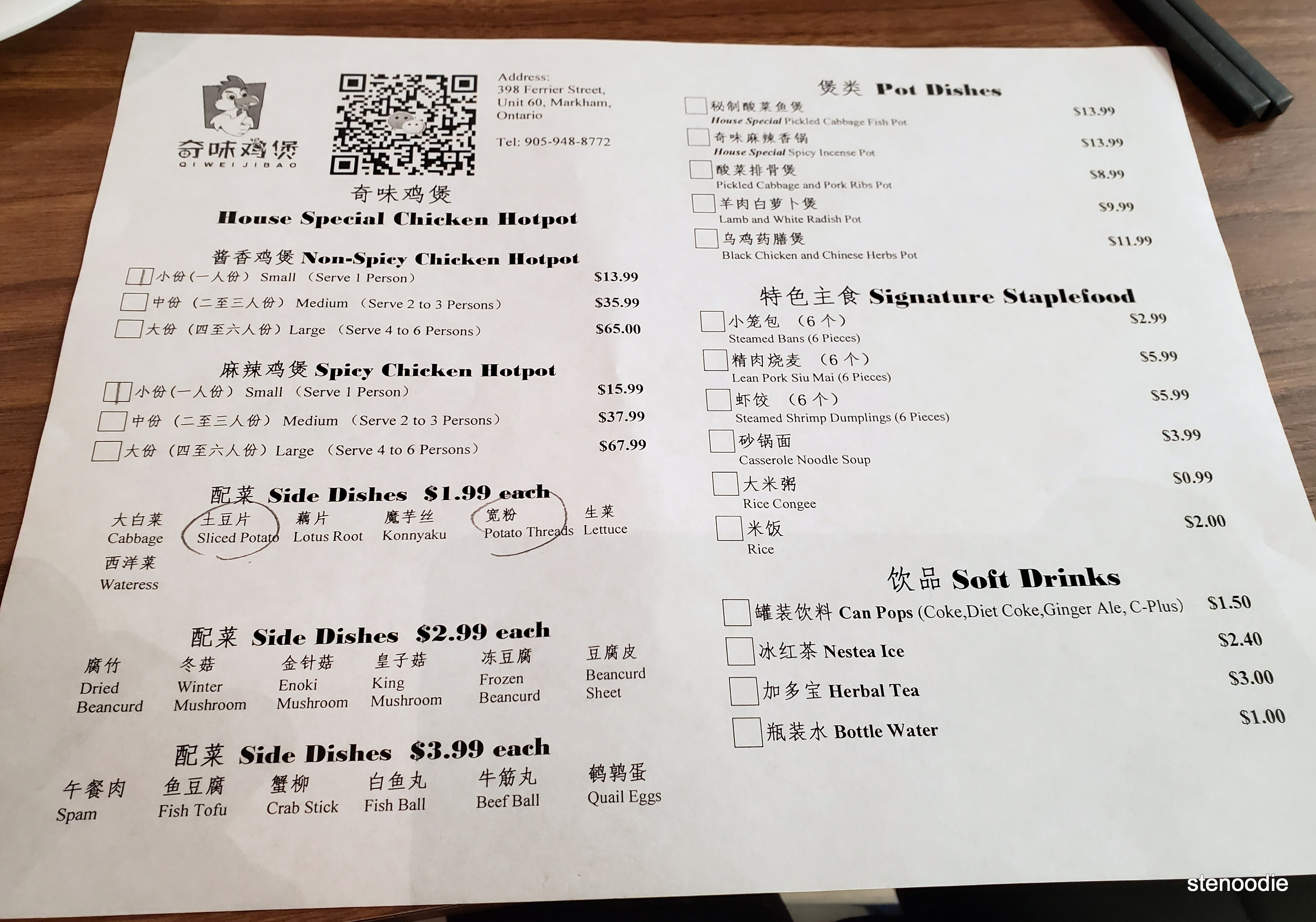 I took a table and sat down.  I was starving and figured I’d try this restaurant out.  Why not.  The Casserole Noodle Soup dish was also only $3.99!  So cheap.  They also had steamed dumplings (xiao long baos) for $2.99.  So cheap!  I almost wanted to order that too but didn’t want to overeat.  I ordered just the Casserole Noodle Soup and waited for it.

In the meantime, I was served hot water and I used their free wifi.  Before long, the noodle came out.  It arrived in a black casserole hot dish to be kept warm (put on a circular wooden board so as to protect the table and to alert you of how hot it is) and I was completely shocked and thoroughly disappointed to see that the noodles that they chose to use for the dish were SPAGHETTI.  Um, what the heck?!  First of all, spaghetti is bland and tasteless without any sauce or seasoning coating it.  Secondly, when you put it in plain soup, it becomes a very plain and flavourless dish.  There were two lettuce leaves and half of a boiled egg in it too. 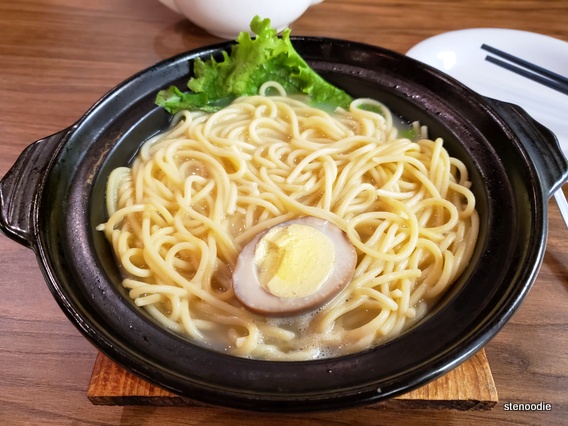 I know and expected it to be a plain noodle dish but I didn’t know that they would have used spaghetti for the noodles!!  For such a very “Asian” restaurant, I would have expected they either use rice noodles or vermicelli or (my preferred) egg noodles.  I was so disappointed.  Sigh.  That’s what happens when you don’t inquire about the noodles first, I guess.  But why would a Chinese restaurant use spaghetti, western noodles, in their only noodle dish?!  Is it because spaghetti is dirt cheap as a supply?  But rice noodles and vermicelli are ridiculously cheap too.

Alas, my hungry stomach wolfed everything down anyway.  And also because I wouldn’t waste food like that just because it wasn’t what I expected.  The noodle soup itself was bland too.

Was it my mistake to come to a chicken hot pot restaurant and only order a noodle soup dish?  Probably.  But I was hungry. 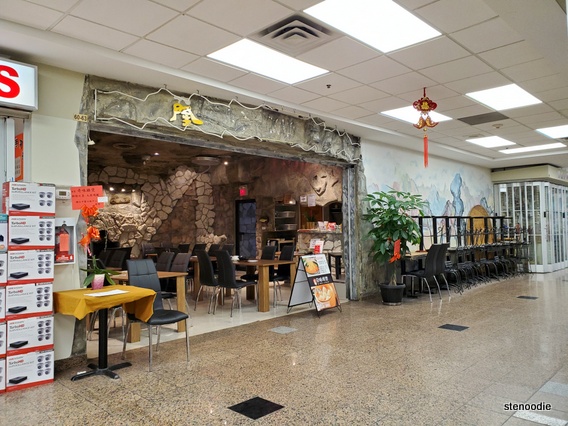 The service of the restaurant was good though.  There were two staff members, one who I presumed to be the owner.  Both were very attentive to their patrons.  There was a nice little plate of complimentary guava candies too in front of the cashier for patrons to take as they wished.

Anyway, the lesson is that unless you want disappointing spaghetti in soup, don’t come to this restaurant for it.  I read online reviews while I was there that their chicken hot pot dishes are actually very affordable and tasty (and spicy enough).  You should come to Qi Wei Ji Bao 奇味鸡煲 for those feature dishes.  Don’t get their casserole noodle soup dish.  My palm is still on my face when writing this, by the way.