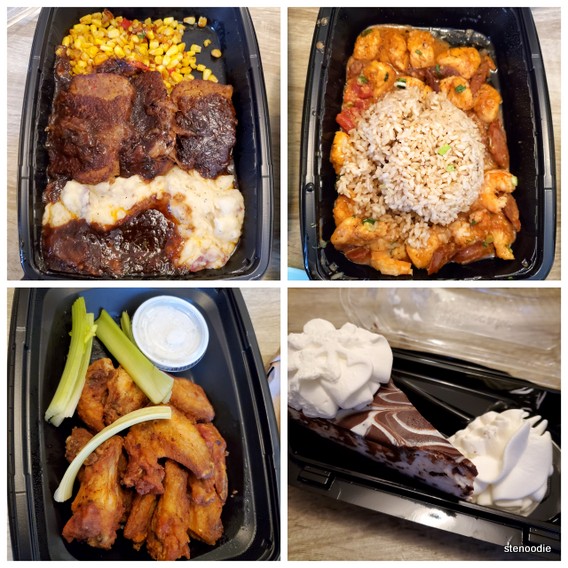 We’ve been wanting to try out The Cheesecake Factory ever since its debut in Canada over two years ago at Yorkdale Mall (3401 Dufferin St, North York).  However, due to busy schedules and knowing that the line-up to get a table can be an hour or more, we were unable to make time for it… until now.  We decided to order takeout from The Cheesecake Factory as our very first takeout meal during the pandemic.  We had been diligent for four weeks to cook and eat at home but decided it was time for a little something different.

It was over the Easter long weekend last month that we pulled up The Cheesecake Factory website, perused their online takeout menu, and ordered straight from their website.  At the time, they had a promotion where if you ordered over $30, you got a free slice of cake by redeeming the code “FREESLICE” at checkout (discovered from visiting their Instagram page).  Score!  If we were going to dine from The Cheesecake Factory, of course we needed one of their infamous cakes too!  (I had previously dined at The Cheesecake Factory in Miami and I recalled how utterly gigantic their portions were.  As a matter of fact, The Cheesecake Factory is famous for their humongous American-style portions as well as for their namesake cheesecakes.)

We made our order of two mains, an appetizer, and a cake (free with the online promo).  There was no takeout fee.  Once we submitted the order at 5:32 p.m., the online receipt informed us that our order would be ready for pickup in half an hour at 6:02 p.m.  They had a curbside pickup option where once you were parked on the premise, you could phone them and a food runner would come out with your food.  We pre-paid for our food via the online platform too.  All seemed good. 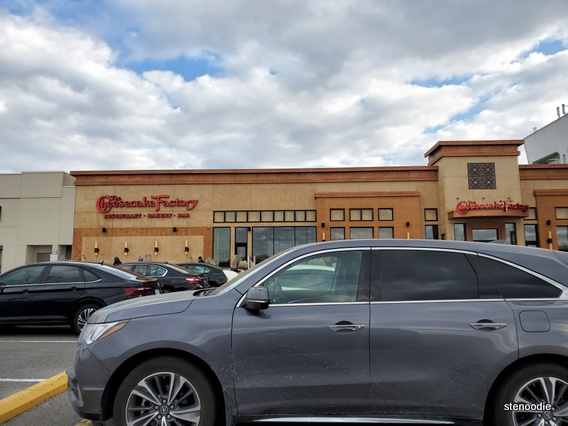 Waiting for our takeout order at The Cheesecake Factory Yorkdale

We arrived at the parking lot of Yorkdale Mall before it hit 6 p.m. and watched as others in their cars rolled up and the food runners carried out brown bags of food orders to their car.  There were a handful of designated “Curbside To-Go Parking Spots” labelled, but we noticed that there were so many customers picking up their orders that the food runners knew to go to the cars parked slightly outside of these zones.  There were surprisingly a LOT of customers ordering from The Cheesecake Factory for dinner on this warm spring evening.

At 6 p.m., we called the phone number indicated on the online order and spoke to a female representative (we had to call a few times because the line was busy before it was finally picked up…).  We informed her that we were parked on the lot and ready for our order.  She asked us what our name was, whether we had ordered food or dessert or both, what vehicle model and colour we were in, and then she informed us that our order would be brought out “when it was ready”.  Um, okay then.  I thought that the receipt clearly stated that our order would be ready by 6:02 p.m.  That was a little disappointing to know that even though we had arrived on time and parked in the designated spot that our takeout order wasn’t ready yet.

We continued sitting in the car and watched as other customers arrived and departed with their orders.  By 6:15 p.m., I was getting a little frustrated (and hungry) and we called them again.  When the phone picked up, the same female representative picked up our call (it was really easy to recognize her voice).  We informed her about our order and that we were still waiting in the parking lot.  She asked us the exact same questions during the first conversation and it sounded like the exact same phone call.  Wouldn’t she have recognized our name and the vehicle colour and model to realize that it was our second time of calling?  She gave us the same response that our order would be out “when it was ready”.  We hung up before we were able to complain that we were waiting for an additional 10+ minutes already…  Anyway, I gave the restaurant the benefit of the doubt and continued waiting.

By almost 6:30 p.m., I was livid.  HOW was it possible that our order was placed at 5:30 p.m., we were informed that the order would be ready at 6 p.m., and yet we were waiting for another 30 minutes for nothing at all?!  We called again and urged the staff that we had been waiting there for more than 30 minutes.  This time, it was a male representative who answered and he acknowledged our issue finally and responded that he would check on our order for us.  Apparently, the back of the house is not in communication with the people who answer the calls, and so perhaps there was some miscommunication related to that…  I was not impressed.

The happy ending is that we finally saw a food runner come up to our vehicle with our order after a few minutes.  Yay, finally!

When we arrived home and unpacked the food, I was a little surprised (but not entirely) that the portions were not as big as the meals served in the Miami restaurant (apparently they serve the generous portions for dine-in but their takeout portions are significantly smaller?).  Luckily, the food was still warm. 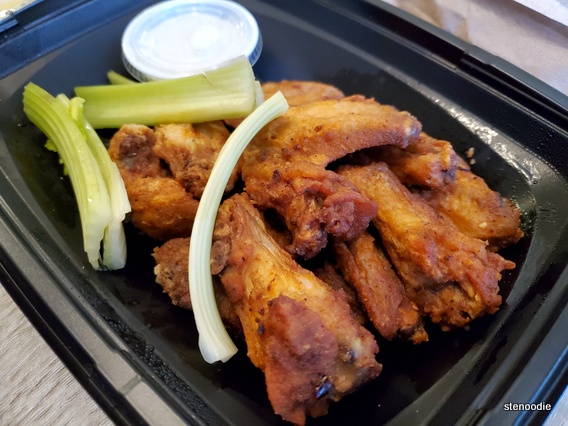 The appetizer portion of the Buffalo Wings was ridiculously small and disappointing at a price of nearly $20.  There were only about ten or so wings inside the small plastic container.  There were a few strips of celery that appeared to be steamed (because they were soft) and a container of blue cheese dip.

While the portion was severely lacking in true Cheesecake Factory style, the flavour of the Buffalo Wings was absolutely delicious with a hint of spice and the blue cheese dip was indeed smooth and very cheesy.  I wonder if their dine-in version of these wings is a bigger portion? 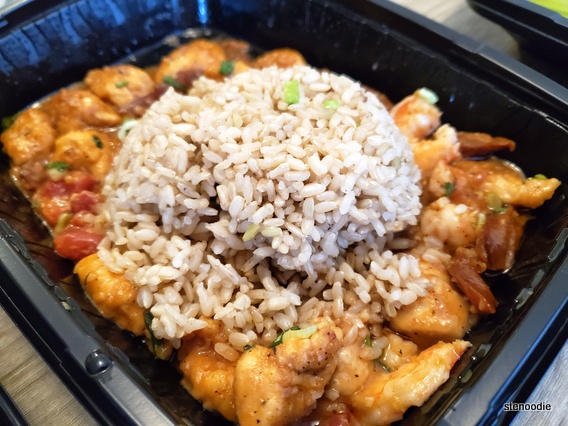 The Shrimp and Chicken Gumbo was a great choice.  There were shrimp and chicken morsels swimming in a gumbo sauce with brown rice (our choice).  The gumbo sauce was spicy and very savory.  In fact, it was a little salty.  It was either overly salty or because we had been cooking and eating at home for a month that our taste buds had been used to a blander palate.  In any case, the chicken was so smooth and moist and the firm brown rice kernels paired well with the sauce.  This was an okay portion size-wise, but still on the small size for Cheesecake Factory dishes. 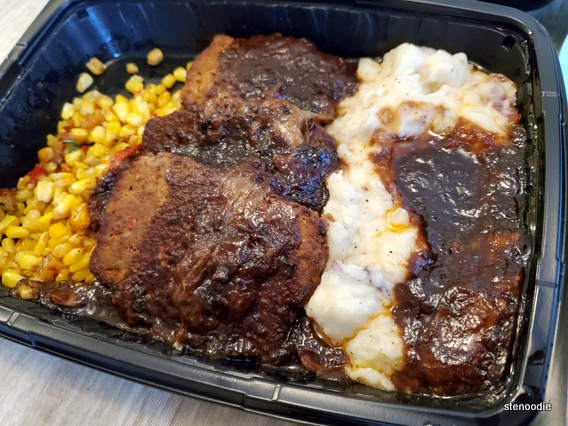 The Famous Factory Meatloaf was the only dish that was a sizable portion.  This entree was put in a large plastic container (I think the gumbo should have been placed in this large sized container too but it wasn’t).  The meatloaf was moist and soft with smooth mashed potatoes and a rich thick gravy and corn on the side.  Again, the overall flavour was a bit on the salty side but the meatloaf was very well done.

All three dishes had something good about it:  The wings had incredible flavour, the gumbo was savory and tasty, and the meatloaf was well done.  The cons were the small portions and tasting overly salty.

We were also given two small loaves of bread with our order and a plastic container of butter. 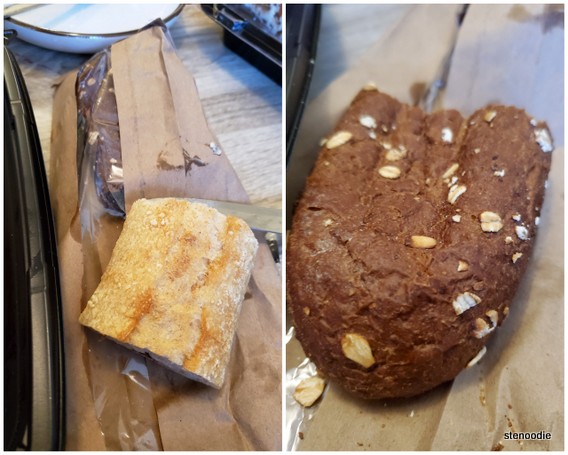 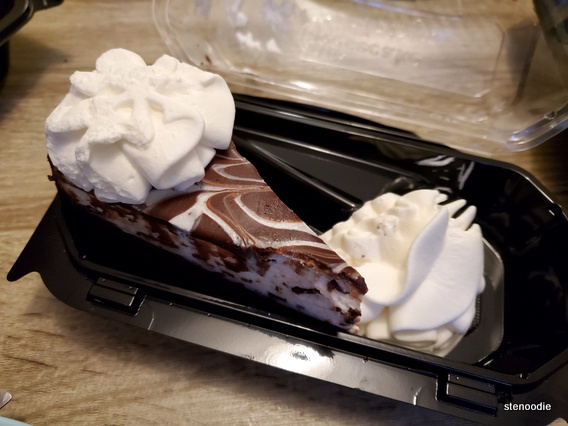 The slice of cake that I chose was the Chocolate Tuxedo Cream™ Cheesecake.  I love chocolate cakes and of course I had to get a rich chocolaty cheesecake flavour.  The plastic container that the cake came in had a little edge built into it so that the slice of cake would remain in place and not fall over during transit.  This was smart on The Cheesecake Factory’s design part.

The Chocolate Tuxedo Cream™ Cheesecake was decadent, rich, and very delicious.  You can’t go wrong with this cheesecake if you like lots of rich chocolate.  It was a filling dinner nonetheless and we couldn’t finish the slice of cake.  I had the cheesecake the next day and it was just as delicious.  The whipped cream was pillowy soft too (with an extra dollop on the side for whatever reason).

Hopefully one day I will be able to experience the dine-in experience at Canada’s Cheesecake Factory.  I’d like to compare and see how their portions fair with our takeout versions and with their American counterpart.  Also, even though we received a free slice of cake, the total price tag of $80 was hefty for our takeout dinner.  Maybe if the portions were actually gigantic like they are in the states, it would have been more worth it for the price.