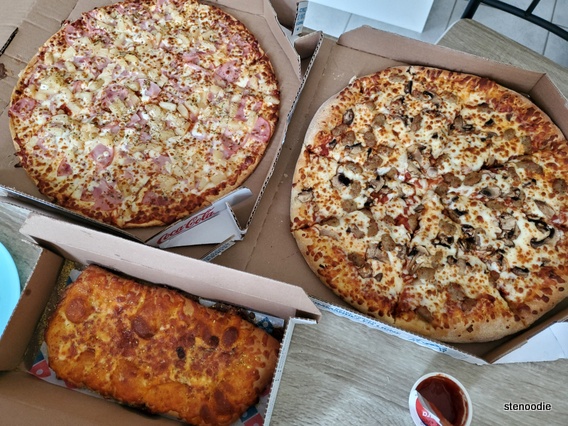 This was actually only my second time ordering pizza to my home.  (The first time was like 20 years ago from Pizza Pizza. XD)

I was craving for pizza and we decided to order from Domino’s Pizza (I’ve eaten Domino’s pizza at parties or work but definitely never ordered it for myself before).

Domino’s has select pizza coupons on their website all the time and you save on orders by applying the coupon to your order.  Although they had a deal for a two-topping medium sized pizza for only $7.99 at the time, I wanted more than two toppings on my pizza and  I also wanted a large pizza.  I didn’t think that a medium size was enough for my craving XD.  They had a coupon for “2 Large 3 Topping pizzas and Domino’s Pizza Cheesy Bread”, which is what I went with.

It was my first time using the Domino’s Pizza website.  I used my smartphone to order and the process was simple and easy.  After entering my address into the form, it automatically selected the Domino’s location that was closest to my home.  In addition to their traditional hand-tossed pizzas, they also have thin crust options!

When choosing each topping, you can actually choose whether you want “extra”, “double”, “triple” amounts.  I didn’t know that was a thing.  I chose nearly “extra” for all the toppings. XD 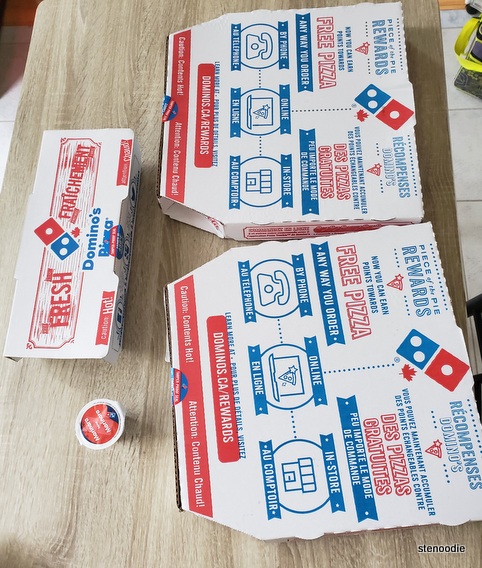 So exciting to receive these at the door!

The delivery time was approximately 22 to 32 minutes (delivery cost is $4).  I recall from my very first time ordering pizza that if they take longer than a certain time, you can actually receive the pizza for free.  There was no mention of this anywhere on Domino’s site, so I didn’t think this was a thing for them.

I also liked how upon placing my order, the screen on my smartphone showed a live meter that showed the progress of my order.  It was really useful and smart.  It updated when the pizza was in the oven, when it was ready to be boxed, and when it was on its way!  It took about 23 minutes from ordering to receiving the food.

On the instructions part of the delivery, I asked for the doorbell to be rang but for the order to be left at the doorstop, which was complied with.  During this pandemic time, Domino’s already has a zero contact delivery and carryout policy so you don’t have to worry about contact with the delivery person (when paying your order online, you can add the tip to your amount at that time).

It was such an exciting weekend to be enjoying hot and fresh pizza at home while watching movies on the (home) screen. 😀 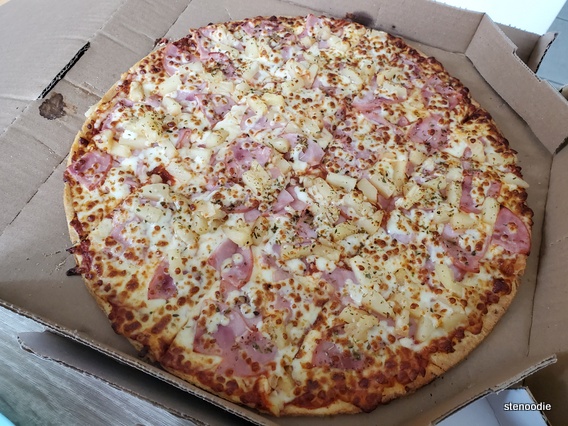 The 14″ thin crust pizza with the extra cheese, extra pineapple, and extra ham turned out to be the best one.  The thin crust was SO delicious with all the cheese melted on top of it.  The extra ingredients really showed too (there was so much ham and pineapple pieces that they were practically sliding off of the slice).  Each bite was so satisfying. 😀

The 14″ hand-tossed pizza was a more traditional Domino’s pizza.  It was still really delicious, don’t get me wrong.  The crust was more fluffy.  Even though I also ordered extra toppings, I felt that it didn’t hold true for this pizza.  There weren’t a lot of sausage bits or mushroom slices on the pizza.  However, because I asked for double cheese, the pizza was definitely fluffy with layered melted cheese on top. 😀 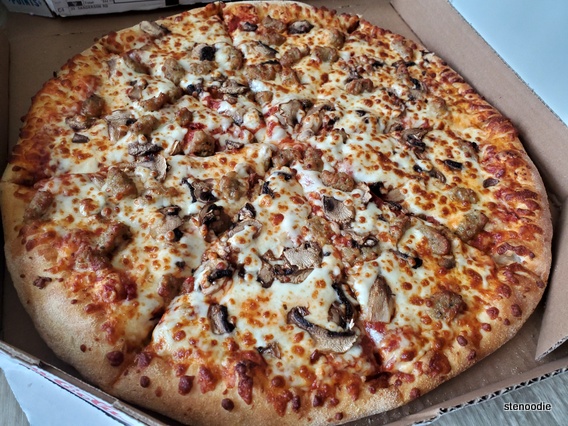 The Pizza Cheesy Bread came with a container of marinara sauce.  The cheesy bread was savory and airy and went perfectly with the tangy marinara sauce. 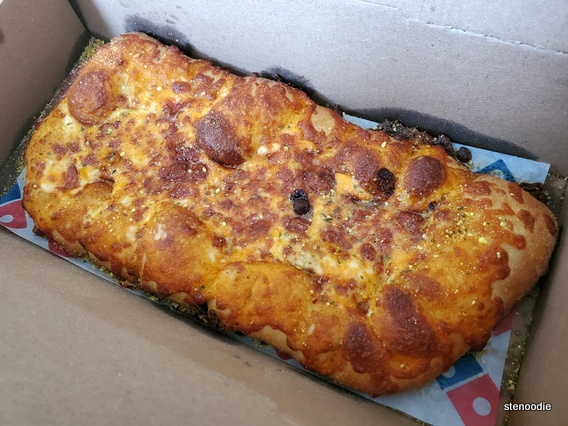 All in all, it was such a satisfying pizza delivery order.  Why don’t we order pizza more often in our household? 😀 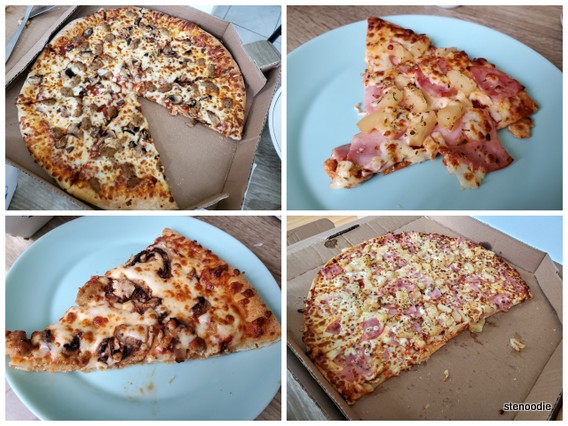 Domino’s also has a rewards program called “Piece of the Pie Rewards™”  where every order equals 10 points.  When you collect 60 points, you can redeem a free medium two-topping pizza.  By making a free account and accumulating these points, you can be on your way to free pizza. ;D