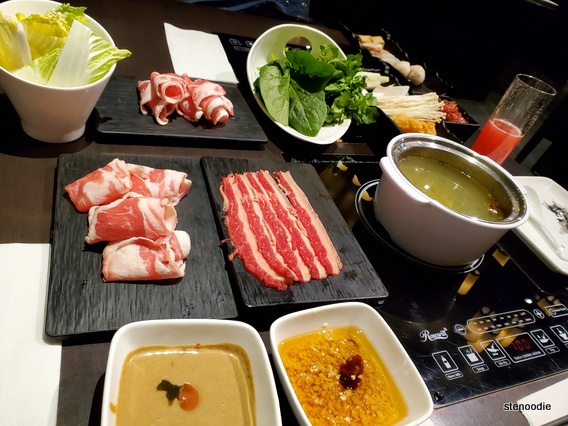 December 31, 2019:  For the last meal of 2019, we went to Legend Pot (九鼎香) at Warden and Steeles in Markham for an all-you-can-eat hot pot dinner.  We wanted a fairly simple and economical hot pot experience and since we hadn’t tried out Legend Pot before, we decided to come here.

We arrived just before 6 p.m. where we had two hours to dine in.  I recall that service wasn’t the quickest here as we had to wait a little bit of time before the servers acknowledged us.  There were actually a lot of people here in the middle of their meals already too at this early dinner time.  It was really nice inside with dark paneled booths on either side of the restaurant and large group tables in the middle. 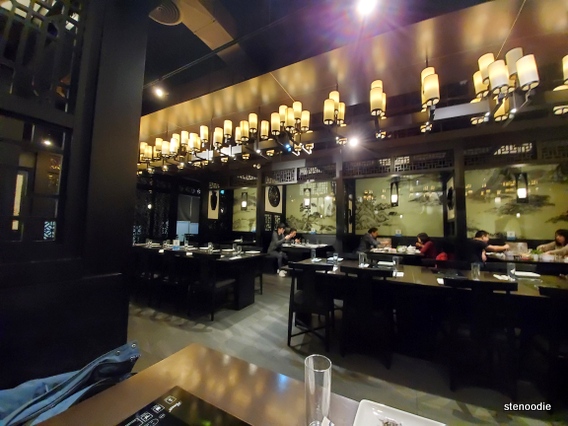 (When we entered through the door, the hostess at the hostess table asked us how many people our party was in Mandarin.  It’s interesting to note that she automatically assumed we were Mandarin-speaking guests as opposed to Cantonese or English speakers only — it just shows you the type of customers who tend to frequent the area, I guess.)

In addition to the fixed weekend adult price for the hot pot meal ($32.99), each soup base was an additional cost as well.  I chose the Pork Bone Soup Base ($3.99) while Ken chose the Fresh Fish Soup Base ($6.99).  We also ordered a Pitcher of Watermelon Juice.  Other than plum juice, this is the next best drink to accompany a hot pot meal (to balance out the heatiness you will be consuming). 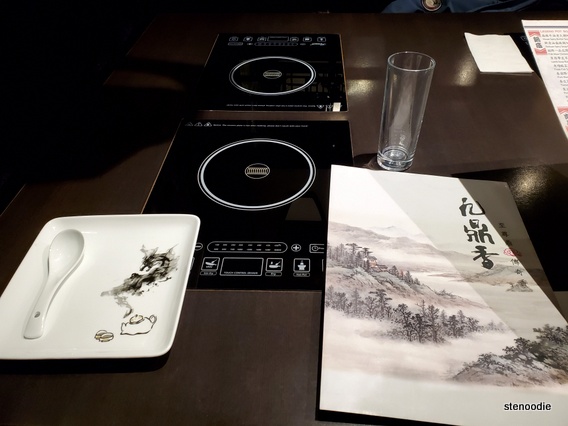 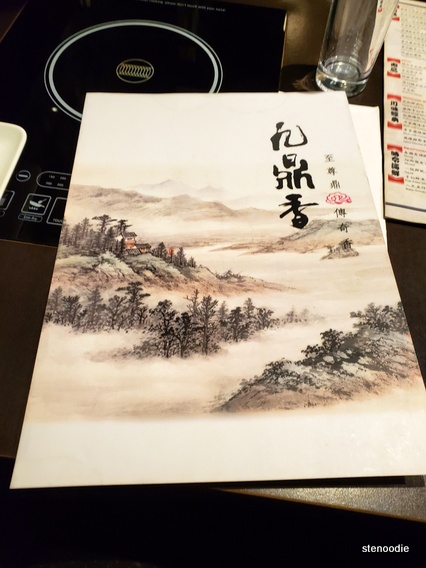 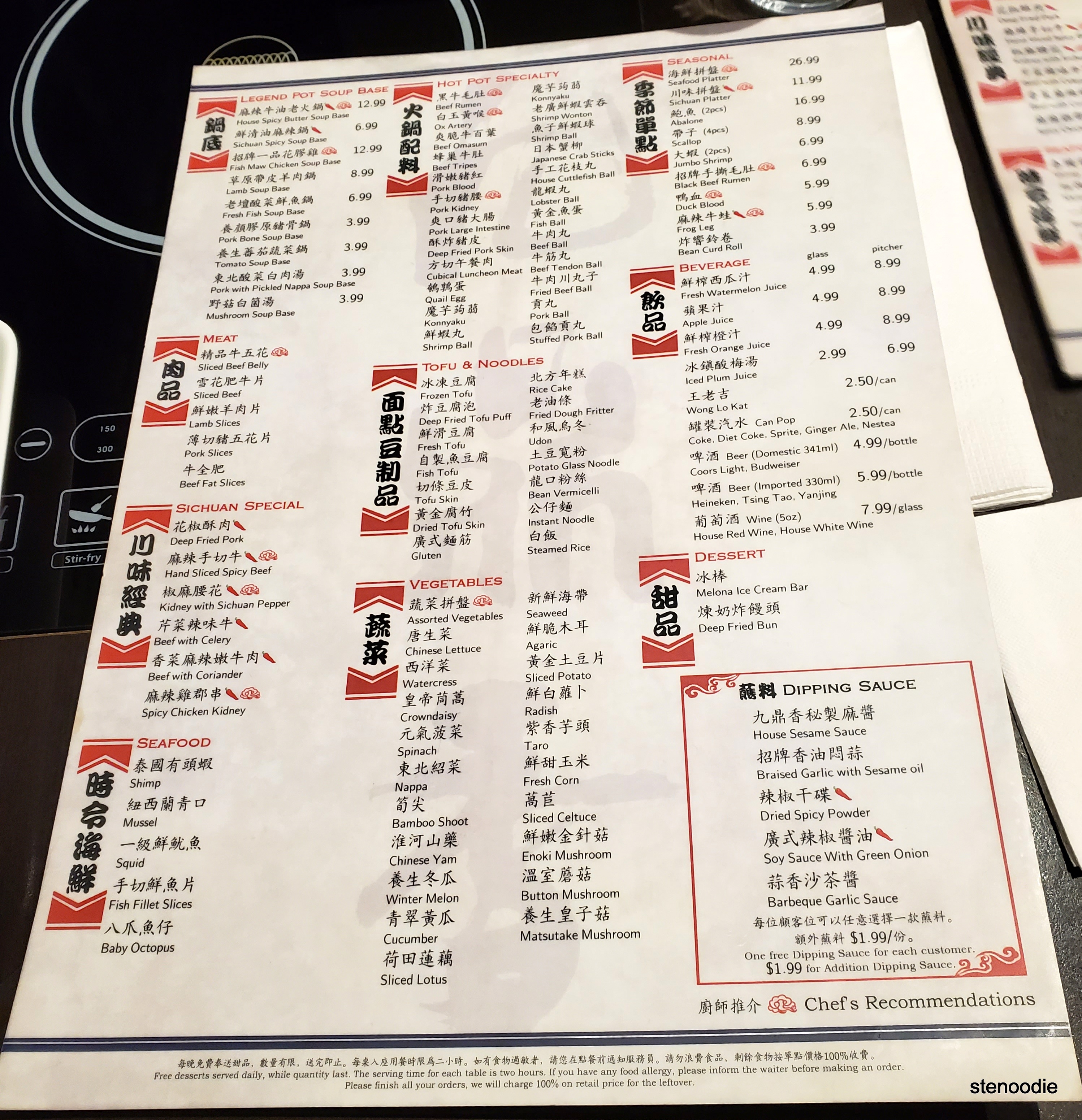 Unlike traditional hot pot restaurants where there is a large communal pot in the centre and everyone dips their raw items into for the hot pot experience, each patron had their own little hot pot at their seat.  There was a stove top on the table for each seat which made this possible.  You could alter the power of the stove top on the table to your liking. 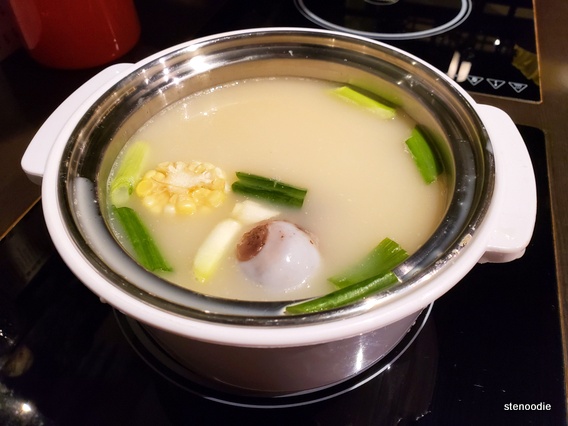 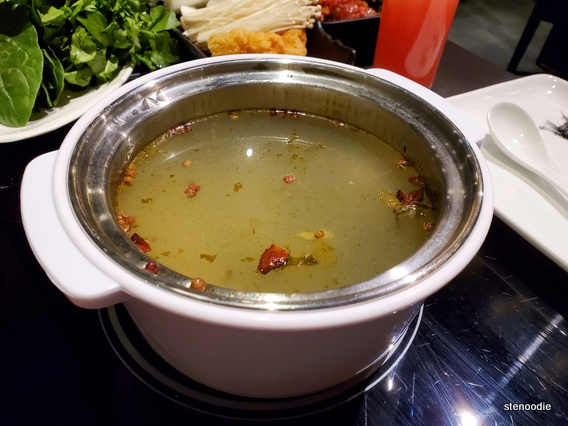 We ordered the items we wanted directly with one of the servers who made a note of it in his iPad.  We even ordered the dipping sauce off on the menu with the server (some restaurants have a sauce station for you to mix the condiments yourself).  Here, the dipping sauces were individually served to you at the table like any other item.  (I guess it’s more hygienic this way, but it also takes the “fun” out of mixing your own sauces at a sauce station.)  Also, there was only one free dipping sauce per customer.  If you wanted more than that, it was $1.99 each. 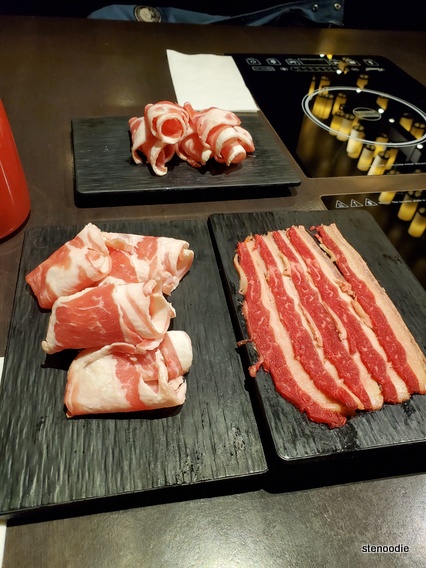 The raw food items arrived fairly quickly to our table.  Every item was plated nicely and in small portions, which encouraged less food waste if you don’t happen to finish what is on the plate but also means that you would have to order double or triple of something if you wanted more of it.  I remember that we received an extra portion of beef that we didn’t order.  The portions of vegetables were small.

I really enjoyed the taste of my Pork Bone Soup Base.  It was milky and very flavourful.  Ken’s Fresh Fish Soup Base was pretty good too, but mine was definitely more flavourful on its own. 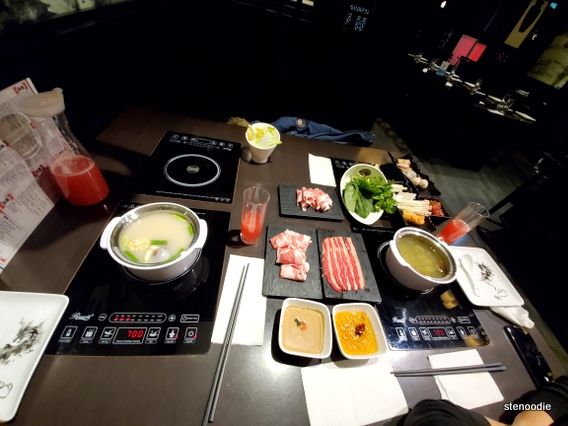 The small individual hot pots meant that you couldn’t put as many items into it to cook at one time.  It also took out a bit of the communal hot pot experience because each person ate into their own pot.  Again, it’s more hygienic this way instead of everyone dipping into the same pot but that’s the fun sharing aspect of traditional hot pot meals too. 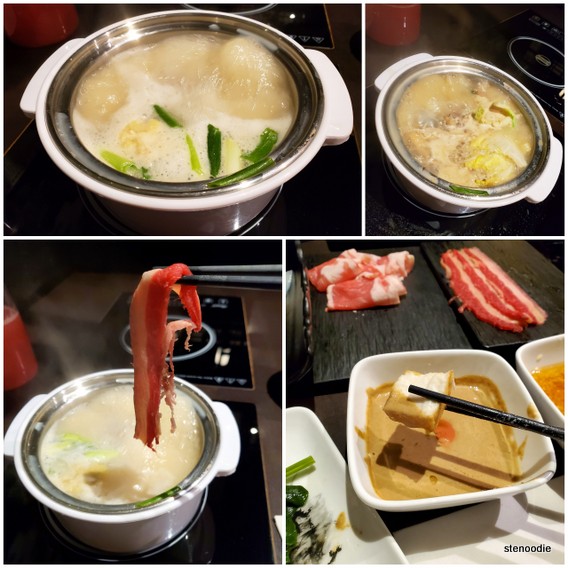 Unfortunately, we arrived at Legend Pot late for our schedule since we had booked an outing at 8 p.m.  Even though we had two hours allotted for our all-you-can-eat experience, we had to leave right before the two-hour mark in order to make it on time.  This meant that we were disadvantaged and weren’t able to take in the full dine-in experience.  We like to enjoy our food leisurely too.  Ah, well. 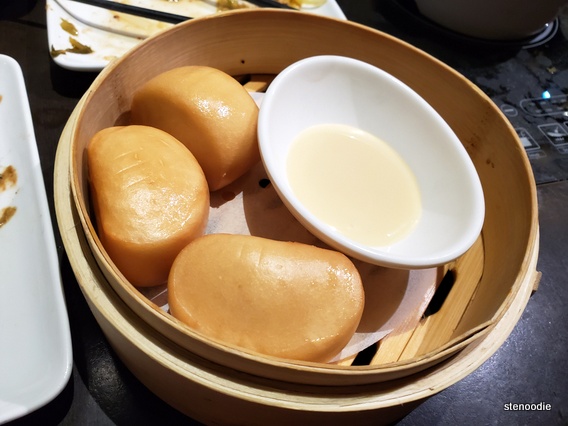 Before we left though, we wanted the Deep Fried Buns with condensed milk.  We had to ask for this a second time because it was a forgotten order.  It was satisfying to end the meal with this little sweet treat.

All in all, it was a fairly good hot pot experience at Legend Pot.  I just wish we had planned our time better in order to make the most of the dinner. 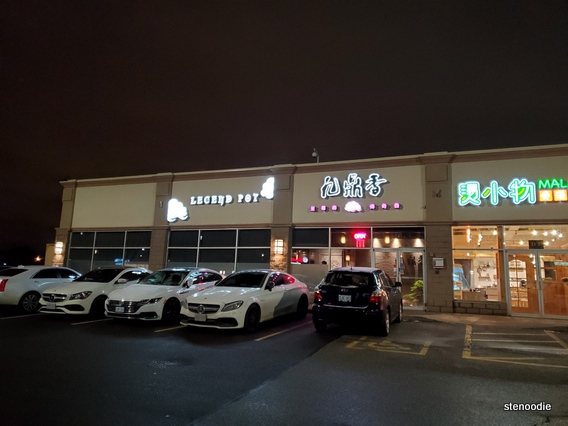