Terra Lumina at the Toronto Zoo 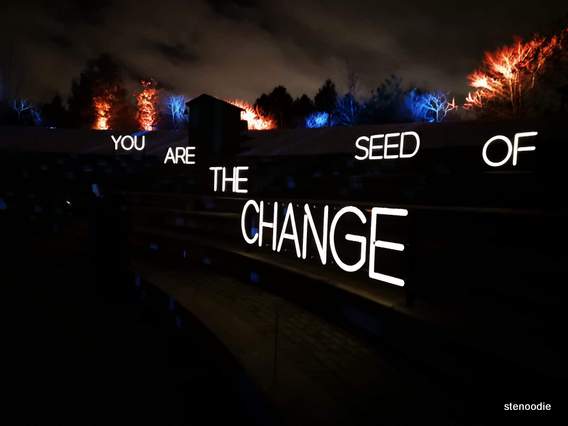 Terra Lumina at the Toronto Zoo

December 31, 2019:  We participated in the Terra Lumina exhibit at the Toronto Zoo on the last day of 2019 before we counted down to the new decade.

Terra Lumina is a unique night walk experience that takes place on the footpaths of the Toronto Zoo.  It was 1.5 km in length and included interactive elements and intended to be an immersive experience.  They illuminated various parts of the zoo with strobe lights, vibrant lighting, multimedia effects, and video projections against original scores to create a magical and enchanted world.  The theme of the night walk began with a “journey” through to the year 2099, “a time when humans and nature have learned to live in harmony”. 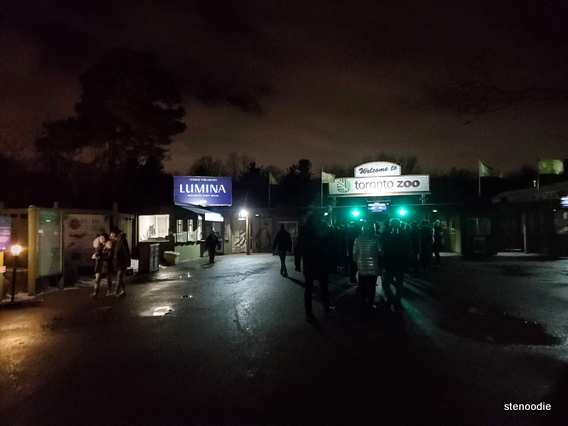 Line-up into the exhibit

Ken had booked our tickets ahead of time online for the 8 p.m. time slot.  We were actually running late from our hot pot dinner but remained hopeful that the time slot wasn’t a strict one since the experience ran from when the sun went down until close at 10 p.m.

When we arrived at the Toronto Zoo at 8:20 p.m.-ish and parked our vehicle, we found the line-up to the event entrance.  There were a lot of people in the line-up and no specific signage about admissions for specific time slots.  It was so cold outside (make sure you double check the temperatures before you go and are appropriately dressed since you’ll be outdoors for the entire one-hour experience), but we gradually made our way to the front of the line.  There, the staff scanned our online tickets without much fanfare and allowed us through.  I guess the time slot really was a suggested one and that even if you run late, they will let you in.  I was so glad about that! 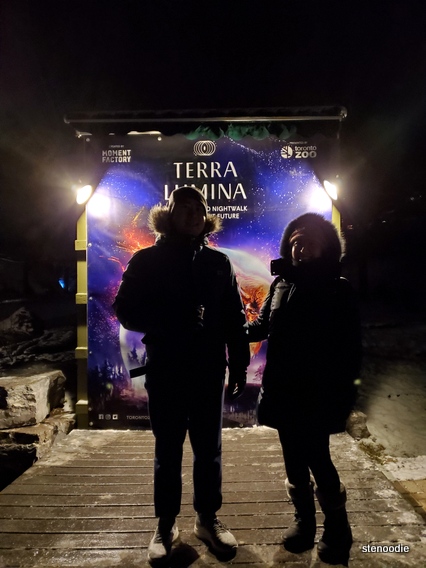 Upon entering the zoo, we saw a large campfire site where lots of people were milling about.  It was an interesting mood to see how many dark figures walking around the quiet spacious area in the chill of the winter (almost like a Nuit Blanche atmosphere). 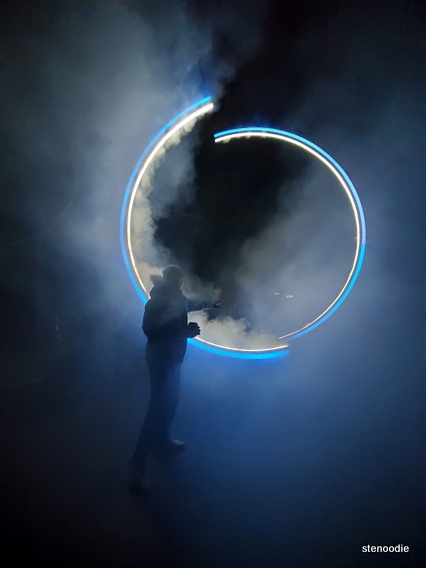 Entering the portal into 2099

We made a restroom pit stop before we started on the “journey into 2099”.  The “Welcome Area” showed a map of the path we were going to be taking.  Ahead, we could see a giant portal illuminated with duo bright lights.  It looked really cool against the pitch dark sky.  There was a fog machine too spreading mist into the woods, highlighting the enchanted mood even more.

I’ll save further comments about specifics of the experience in case you plan to visit it yourself; I wouldn’t want to spoil it for you.  You definitely want to bring your camera with you to capture the unique nighttime visuals created from the multimedia effects and lights (or just remember it with your eyes).  (The whole exhibit was a photo op basically.) 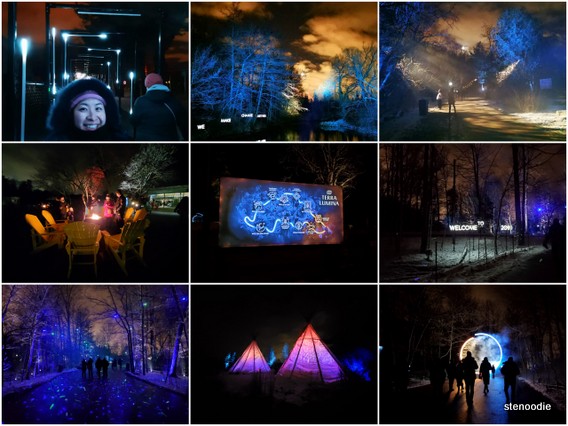 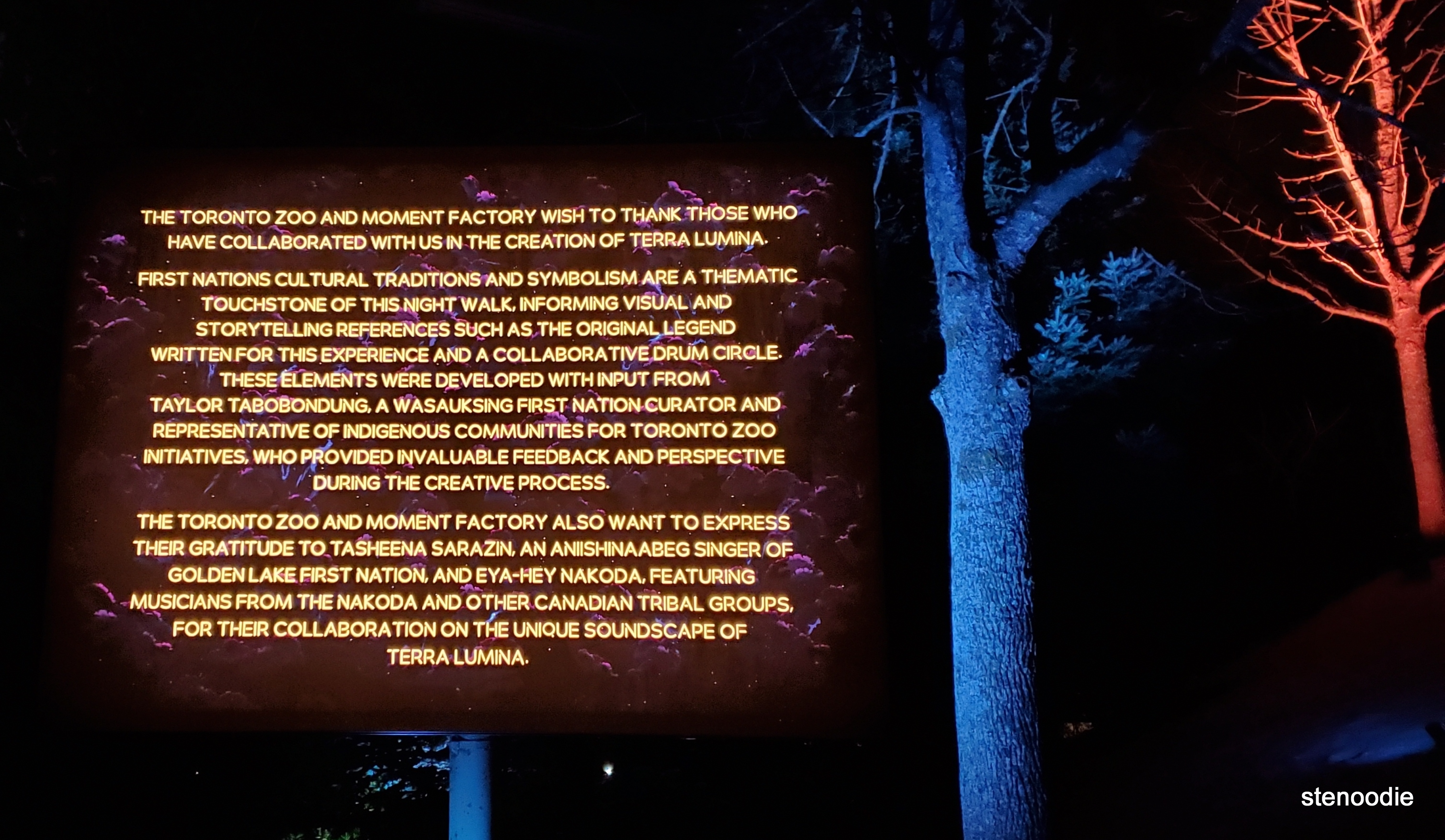 All in all, it was a good “excuse” to walk outdoors in the pitch dark on the Toronto Zoo grounds.  It’s also a smart marketing idea on the Zoo’s part to come up with this event to boost their profits during the slow winter months.  I definitely had fun with my boo too.  However, I definitely have some qualms about the whole event:

Considering the entire theme of the night walk was to ensure that in the future, humans and nature co-exist in a harmonious manner, it was kind of ironic that they chose to play out this message in a zoo where normally free wildlife are kept captive.  It’s ironic that the underlying message is about climate change and how we as humans should protect the earth at all costs, but yet here we are disturbing the animals and nature itself with bright lights and music in the dead of the night when it should naturally be pitch dark and silent.

[One specific part about the exhibit that I remember being completely ironic is at the polar bear enclosure where a video projection was shone against the polar bear’s imitation caves.  The projection was of a polar bear swimming in the water and some words overlaying throughout about how we need to protect the animals (as far as I recall).

I was dumbfounded how instead of viewing an actual polar bear (not that we needed to), we were watching the movie of a polar bear being played on a projection screen.  Um, maybe if we treat the earth a little better, these big polar bears would actually have more places to play and live on earth and we wouldn’t be left with just video images of them in the future.  We all know that eventually polar bears will be extinct due to the warming waters leading to less area for them to hunt, live, and procreate.  It was so ironic and frankly sad to watch so many other guests enthralled at the video projection and not realizing that the polar bear inhabitant was actually sleeping in the same enclosure!  So many people were taking photos and videos of the video projection too…]

Needless to say, I was quite concerned about the welfare and health of the animals who actually live at the zoo.  When we were nearing the end of the journey, I saw a zoo attendant and asked her about the animals.  I wanted to know if the unnatural bright lights or blasting soundtracks would be disturbing to them at night.  She informed me that the zoo ensured that any light would be blocked out from wherever enclosures the animals were staying in and that they were safe.

Despite the reassurance, I still doubt that the measures they took fully protected the animals from being disturbed.  When installing the lights and sound systems, wouldn’t this have affected the inhabitants?  When the hundreds of guests walk the paths at night, wouldn’t it still create some kind of rumbling or vibration on the grounds to disturb the inhabitants?  Animals and wildlife cannot talk to us directly.  How do the zookeepers or people installing the whole experience know that they really haven’t affected the well-being of the inhabitants?  It’s just so ironic that we need to build this kind of display in this kind of environment just to tell us humans that we need to co-exist more harmoniously with nature.  It’s entirely counter-intuitive.

At the end of the day, unless humans really want to charge ahead and recklessly take control of the earth despite all of the warning signs that Mother Nature is giving us (and has given us already), nothing is going to change.  Greed is too strong of a thing for humans to ignore and it’s so easy for humans to take advantage of those who cannot speak for themselves.

Instead of attending and participating in these “fun” exhibits where we are reminded time and time again about how frail the earth is and how humans should be protecting the planet instead of profiting from it, we actually need to take action.  These little reminders are all fun and games for the moment, but it seems to be forgotten the second we walk away from it.  Climate change and the deteriorating planet aren’t things to be considered only when we have time for it.  It’s already happening and happening fast.

1 Response to Terra Lumina at the Toronto Zoo