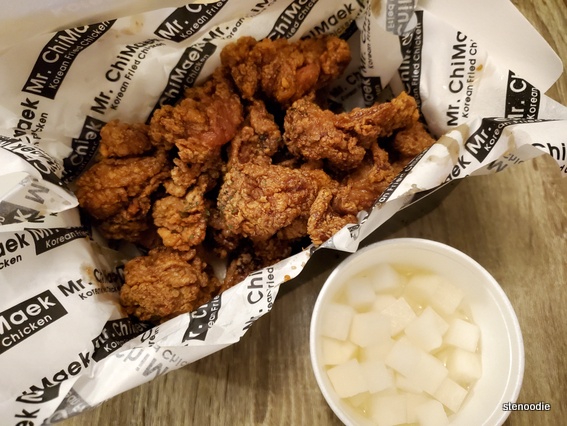 On this rainy evening, my husband wanted some Korean fried chicken and didn’t want to drive out for takeout.  Thus, we decided to order delivery from Mr. ChiMaek using UberEats.

We don’t often order takeout using these delivery platforms, so this was a nice treat.  Delivery of the food on the app was $1.49.

We chose what we wanted to order and then placed it on the UberEats website.  It was a straight-forward process that involved a two-step verification system too.  The estimated time of arrival was 30 to 40 minutes.  I liked how there was a live map that showed the Uber driver picking up the food, just like how you would see your driver approaching to pick you up if you had ordered an Uber to get from one place to another.

I was able to leave drop-off instructions for the driver.  It’s all about the contactless approach nowadays, so I requested the driver to ring our doorbell when he/she arrived and then put the food on the chair that we have on the porch.  This was exactly what was done, which I appreciated.  I also really appreciated that the food arrived ahead of the estimated time by five minutes. 😀 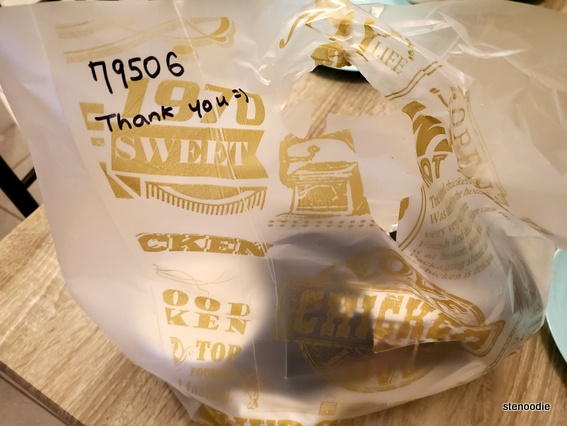 The dead knot on the bag was totally unnecessary

The Garlic and Soy Sauce Fried Chicken was in a rectangular cardboard box with a side of pickled radish and some cutlery wrapped in napkins.  All of this was placed into a transparent plastic bag (that was unnecessarily tied in a dead knot).  One of my pet peeves is when restaurants include disposable cutlery with the takeout order without asking.  It’s more garbage that goes straight into the landfills.  Next time, I must remember to state “no cutlery” on the special instructions section. 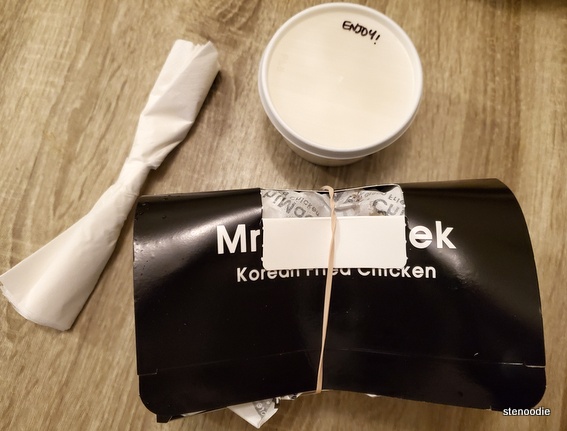 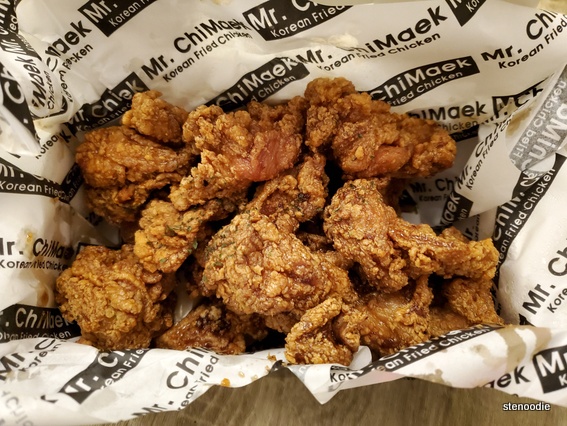 The portion of the boneless Garlic and Soy Sauce Fried Chicken was not very big when judging from the look of the box.  However, it actually turned out to be a good portion for three people.  We also had fried rice, tofu soup, pickles, and green beans that night to complement our fried chicken order too.

I liked the batter of the fried chicken.  The flavour of the seasoning was a tad sweet; I tasted more of the sweet soy sauce than the garlic.  However, it was thoroughly tasty.  The chicken meat underneath the batter was so smooth and juicy too.  The chicken was also still hot and delicious. 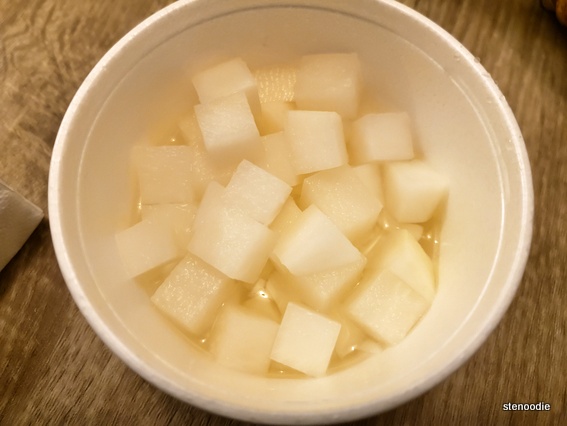 We found the pricing of the chicken dishes from Mr. ChiMaek a little pricy, which is why we only ordered one type of fried chicken.  After tax, tip, and the delivery fee, it added up to at least $7 more on top of the $32.  It’s too bad that there aren’t a lot of these dedicated Korean fried chicken restaurants near us to pick up without at least a 40-minute round-trip car ride.  I really enjoyed the Korean fried chicken from Mr. ChiMaek.  We had leftovers actually, which I happily ate the next day as breakfast. ^_^

Fun fact:  I actually visited the restaurant back in the autumn of 2018 with some friends for lunch.  We ordered two types of their fried chicken during that visit.  However, I have still yet to blog about it…  Oops.  Maybe one day I will finally get caught up on all of my food backlog posts. 😛