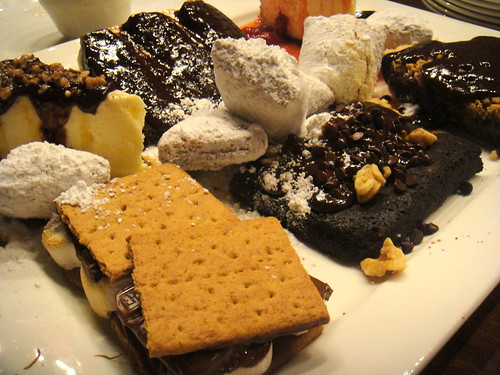 On the second last day before we left Greensboro, we all decided to go out for a lovely dinner at Darryl’s Wood Fired Grill.  We were a big group of more than 20 and had to wait a little bit of time before the host called us.  Since we were such a big group, we ended up splitting up into three tables but they made sure to put us in the same area so it was like we were still eating together which was nice.

Darryl’s. Apparently they also serve nitrogen ice cream! I’ll have to try this next time! 🙂

We started off by choosing drinks.  They had a huge selection of beers and despite initially not knowing what to order, I ended up with the Red Oak Lager.  I was a little disappointed that the beer wasn’t filled all the way up to the glass, but it was a decent beer.  It wasn’t too spectacular, though.

Sarah and I decided to share two dishes — Darryl’s Three-Way Sampler and the BBQ Salmon Salad.  Darryl’s is all about barbecue and hearty Southern food so the sampler was a great way to sample their three most popular items: cajun fried shrimp, chicken tenders, and signature baby back ribs.

I really liked the cajun fried shrimps but the chicken and baby back ribs were just okay.  The chicken tenders were very plain in taste and the baby back ribs weren’t very tender or fell off the bone.  What I did love was the sides that came with the dishes.  I really enjoyed the cheesy grits! 😀 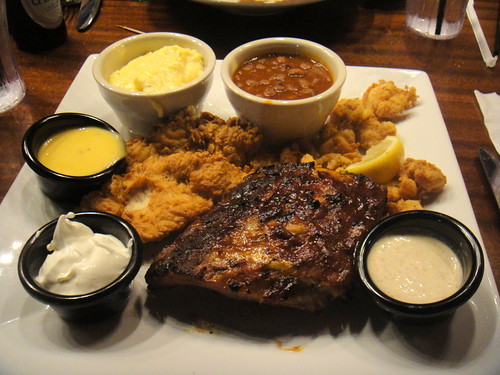 The BBQ Salmon Salad was okay as well.  It contained a lot of tortilla straws which I thought was interesting.  The salmon was all right and there wasn’t anything too memorable about this salad.  It was a refreshing choice after a couple of days of eating lots of fast food for sure, however! 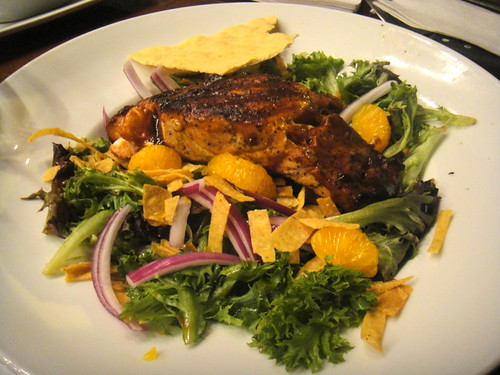 BBQ Salmon Salad. $14.99
-a 7 oz filet of salmon seasoned and grilled to perfection over hickory and brushed with smokey BBQ sauce, placed on top of a bed of American spring mix tossed with cilantro-citrus dressing. With red onions, spicy pecans, mandarin oranges, cilantro and a bed of tortilla straws

I tried the macaroni and cheese that came with Mabel’s steak and I absolutely loved it!  The cheese was so rich and the macaroni was so smooth.  Mmm!!  It seems like their sides are better tasting than their actual dishes lol… 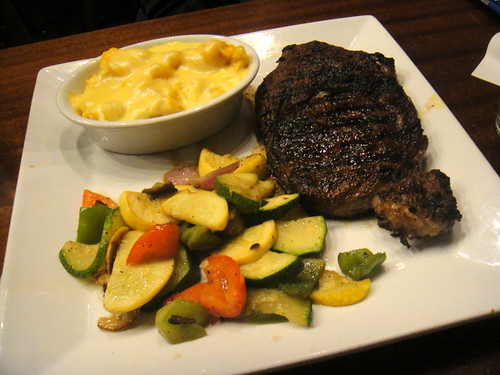 Steak and macaroni and cheese and veggies

The burger that Lawrence got: 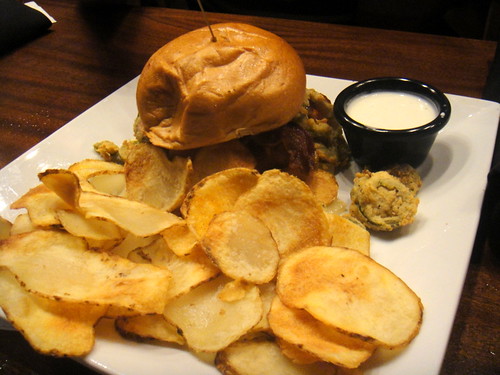 We were all very, very full by the end and we couldn’t even finish the ribs unfortunately.  However, Matthew and An had the idea of getting the epic dessert sampler and when I saw the picture in the menu, I absolutely couldn’t say no.  This is what it looked like: 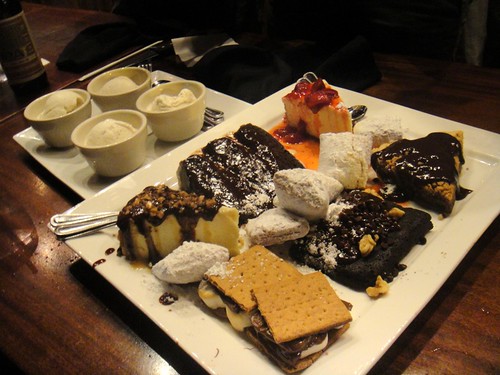 I’ve never had such a huge dessert sampler like this before!  It was so huge that even though we had a table of 10 and various other friends around the same area and everyone tried some, we still had leftovers on the table.  It was a crazy and crazy good dessert sampler! :9  They had Beignets, Homemade Cheesecake, Turtle Cheesecake, Charleston Chocolate Chip Pie, Hot Fudge Brownie, Cappuccino Cake, and two S’mores!!!  I loved the brownie and cheesecake and S’mores!  The ice cream on the side was absolutely divine as well.  So smooth and delicious! 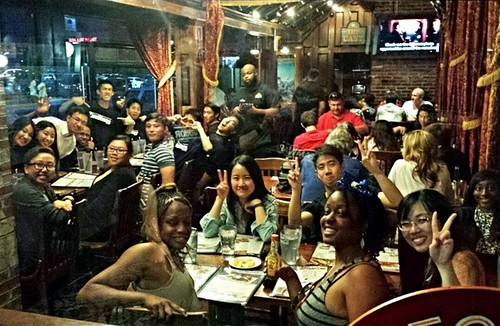 It was a great night of dining out and laughing like crazy with friends.  I had so many times where I was laughing so hard that my abs hurt.  Such a fun night.  I can’t wait for more of these in the future. 😀