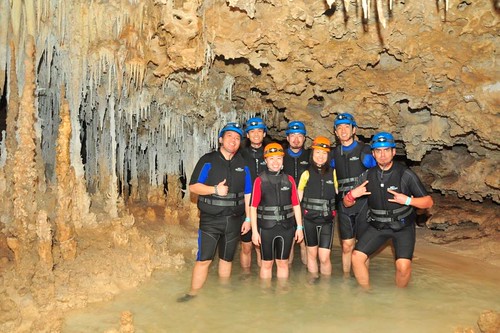 Inside the Rio Secreto in Cozumel, Mexico

Today we went on our first excursion after docking at Cozumel, Mexico!!  Yay!!! 😀  The seven of us had chosen to do this excursion ahead of time and booked it online through the Carnival website.  At 8:30 in the morning, we gathered together in the Spectacular Lounge to disembark together with other excursion goers off the boat. 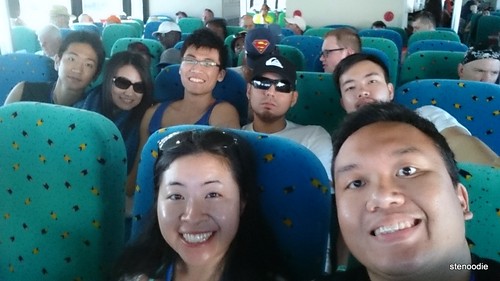 On the yellow ferry to the island! 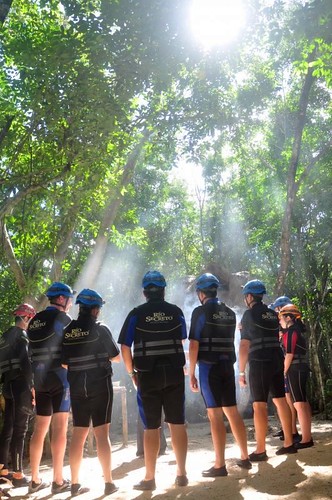 From there, we found the Secret River representative and boarded the yellow ferry to an island that was 30 minutes close to Cancun.  We signed our waivers, boarded a small van and headed towards Rio Secreto on a narrow road and bumpy road.

Once we were there, we placed our belongings in lockers and affixed ourselves with tight-fitting water shoes, helmets with lights, wet suit, and a life jacket.  Then Raul, our tour guide for the entire journey, led us into the dark cave.

But before that, we went through a brief ritual where a shaman blessed us with some smoke and chantings before we entered the cave as it was a sacred ground for the underworld.

It was dark inside the cave and our headlights and Raul’s flashlight was definitely needed in order to move around inside the watery cave.  All around us, there were rock calcium deposits in the form of stalactites and stalagmites.  The bottom of the cave ranged from being uneven to rocky to high and low surfaces which meant we had to make sure we walked with our knees high and to figure out the terrain in front of us.  It was a difficult task since everything was underwater and it is difficult to see where you are going. 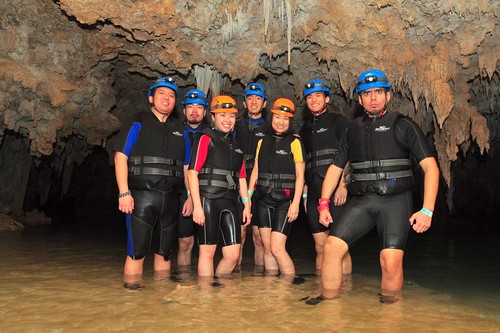 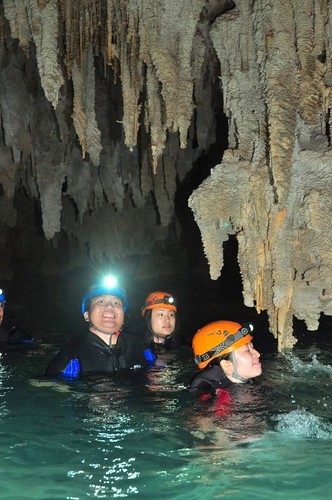 There was a point where we had to swim across the cave too!

It was really cool and fun inside.  Raul taught us about how stalactites and stalagmites are formed, what “popcorn” is, and other odd and interesting facts about the cave.  At one point, we also sat on the ground of the cave and shut all the lights off and stayed still in the darkness.  It was dead quiet inside and we could hear the occasional water drip down and make a small splash.

Before long, after photoshoots and recovering from trampling over unknown uneven surfaces, we literally saw the light at the end of the tunnel/cave and resurfaced into dry land.

I liked how Raul made the experience a spiritual one by telling a short parable about how we were in the underworld and as we emerge, we are awakened with renewed senses and can see everything anew.  It made the experience seem more intrinsically valued.

We took off our wet gear and Raul led us to a hut where a buffet lunch of Mexican food was being served.  We had chicken soup (very thin), cactus salad (yum), rice, pasta, salad (yum), chicken, tortillas, and refried beans. This meal was included as part of the excursion. The food was pretty decent too! 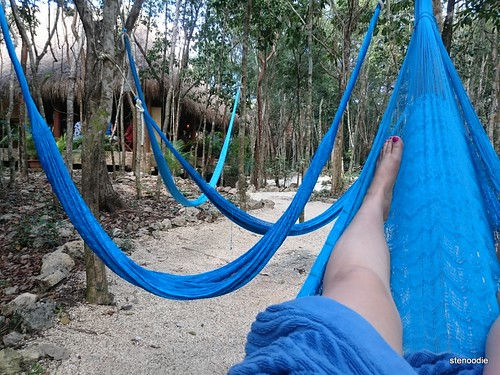 Having laid in the comfy hammock for a couple of minutes, we returned back to the van which led us to the dock and pier.

We had half an hour to spare so we dipped ourselves in the Atlantic Ocean for a short swim before we re-gathered together to walk to the pier to board the yellow ferry back to the Cozumel pier.  We made it back in record time at 4:40 with the ship leaving at 5 p.m. 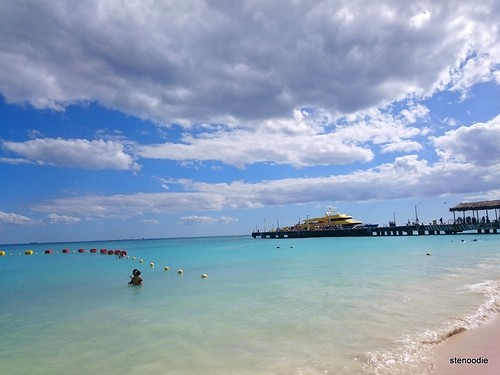 We got to spend some time on the beach too!

This Secret River excursion was a lot of fun and I really enjoyed the unique factor of it.  Our tour guide did an amazing job of leading us through the cave too. I would recommend this excursion if you like exploring underground caves and don’t mind being in dark and enclosed spaces.  You also need to know how to swim or doggypaddle through one of the deeper parts of the cave that is all filled with water.  The excursion is also a bit pricey considering we really only participated for an hour and a half ($104).  However, any excursion and experience is what you make of it so if you think it’s worth it and you’re curious as to what this Secret River looks like, then try it out for yourself too.  We also bought the CD worth of pictures and split the cost between the seven of us which was like 10 bucks each.  Yay for big groups excursing together 🙂