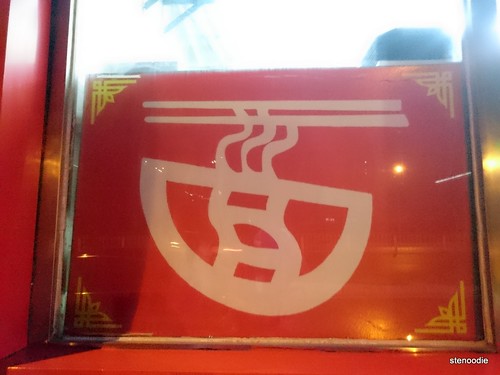 Wheeee!!!  So exciting!!  I’m in Beijing again 😀 :D.  Last time I was in Beijing was two years ago in the summer as part of the awesome DiSCOVER 2013 Program that was subsidized by the Mon Sheong group.  We travelled as a group of 20 young individuals for two weeks to China and visited four cities (read the whole day-by-by blog posts here).

This time, I am travelling only to Beijing with my mom.  Even though I’ve visited Beijing before, this is my mom’s first time here.  I wanted to travel with her here since she wanted to go and visit places like the Great Wall of China.  Our parents aren’t getting any younger so we must travel and spend quality time with them as much as we can. 🙂 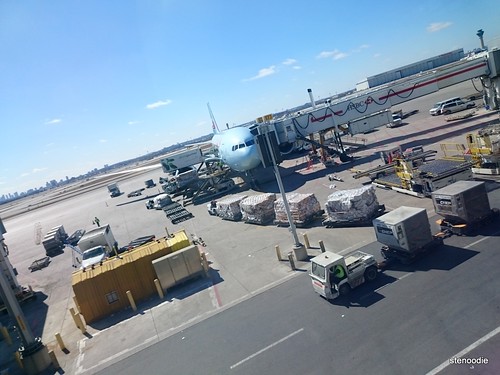 Mandatory airplane picture before taking off 😛

Last night, I packed my luggage last-minute (again) and tied up some loose ends like making sure I had enough space for pictures in my camera phone, sending off emails and other miscellaneous errands.  I didn’t sleep!  Partly to cope with the upcoming jetlag and also because my to-do list before flying was extensive too.  I ended up sneaking an one-hour power nap before we left our place at 11:15 a.m. and off to the airport. 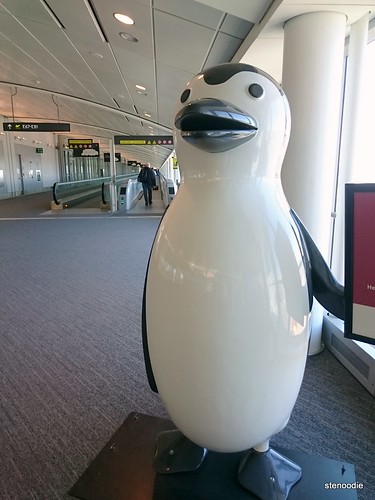 Penguin in the airport

The best part about flying to Beijing versus to Hong Kong this time was that the flight was later in a day; at 3:30pm.  We didn’t have to rush like we usually do to get to the airport on time.

We flew for 13 hours and I watched three movies!  I haven’t watched movies on the plane in a while.  I remember that the last time I was on a long flight of 13+ hours, I actually slept most of it away.  I watched The Giver, Boyhood, and Whiplash.

Whiplash was the most interesting one to me.  I’ll never look at drummers the same way and will appreciate how much mental work and keeping of time is required.  I’ve read The Giver in elementary school and had fond memories of it being one of my favourite books.  The movie version was a little different from the book but overall it maintained the ideas and was well done. 🙂

Boyhood was two hours long and too long in my opinion.  It was about a boy growing up and what his challenges are.  It was okay.

The 13-hour flight this time to me felt sooo short!  It only felt like 5 hours or so.  The time just flew by!  I slept the rest of the time..or eat.

Welcome to Beijing! I recognized this place in the airport immediately. It is exactly the same from two years ago!

We got to Beijing Capital international airport (BCIA) at 4:30 pm, spent the next hour and half going through customs and waiting for our luggage.  A car was waiting to take us to the airport as part of the China tour we had joined. 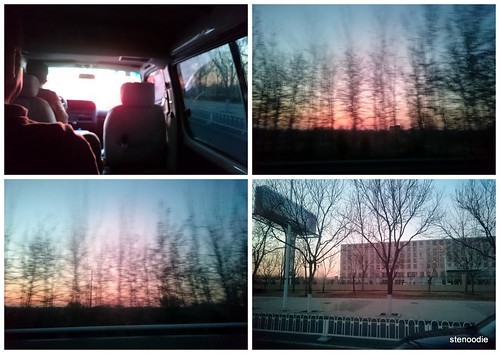 There was realllly bad traffic and we didn’t get to our hotel until almost two hours in, 8pm.  I’ve stayed at this hotel before!!!! 😀  We also stayed at Chang An Grand Hotel two years ago with the DiSCOVER clan!!!  Haha, what are the chances!? 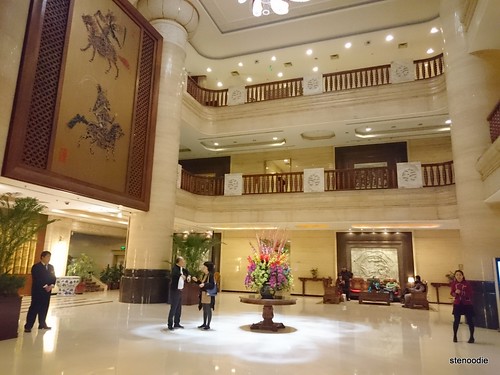 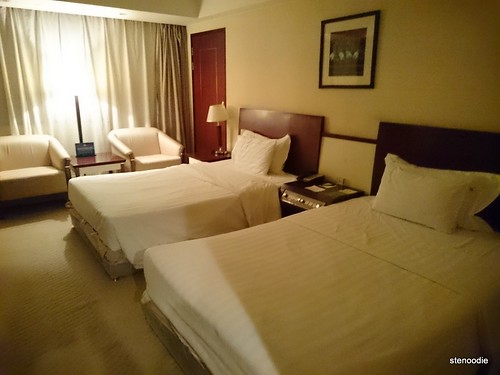 Comfy hotel room for the next five nights

I adore this hotel.  It’s so grand-looking, feels safe, clean, has wifi, and there’s a drinking tap for clean water in the washroom, and there are controls right next to the bed to control the lights.  Hehe.  Everything’s the same.  I recognize it all! 😀

After checking in and throwing down our luggage, I spent a bit of time using the wifi to get caught up with the happenings back in Canada.  However, no facebook usage here!

My mom and I strolled out of the hotel to find some food for a late dinner.  China in March is actually kind of chilly!  The air is crisp and fresh and actually is just like the weather in Toronto right now.  Funny. 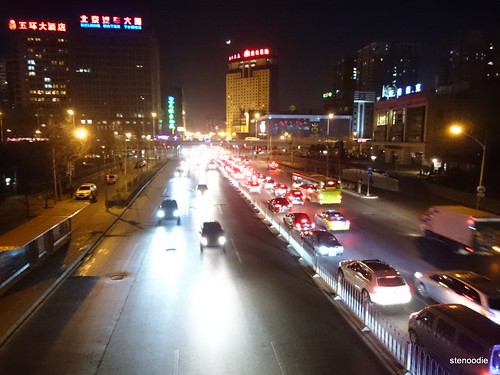 View from above the pedestrian bridge

We crossed the big intersection and came across a row of noodle shops.  We ended up choosing the one that was brightly lit from the inside and looked very clean.  They had free wifi too!!  Score! 😀 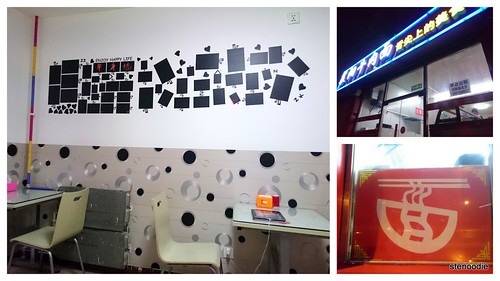 Clean restaurant that had a unique logo on the front; that bottom right picture shows the Chinese character of “noodle” and also looks like a bowl of noodle with chopsticks too! 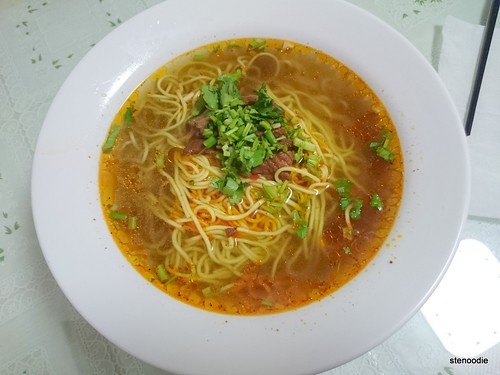 We ordered the beef noodle soup.  Wow.  I was blown away by this!!  This was the best beef noodle soup I’ve ever had!  It simply looked spectacular (love my camera).  The soup base was a bit mala spicy but it was soooo delicious!  The noodles were PERFECT.  There were few pieces of beef but they were tender and soft.  Perfect!!!  I couldn’t resist drinking a lot of the soup base too.  It almost felt like I was instantly addicted to it (don’t tell me this is one of those Chinese specialties where they add an ingredient to the dish to make you actually addicted to the food…).  It was only 18 RMB which is just $3.62 CAD! 😮 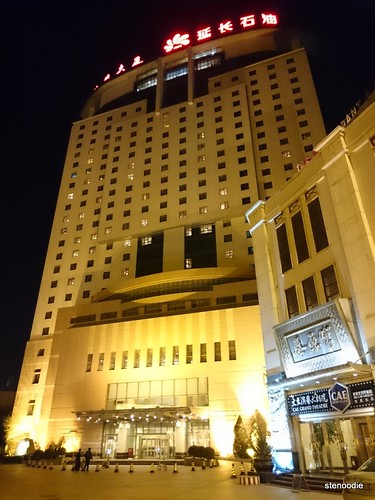 Back at the hotel at night

In any case, this was the best bowl of noodles I’ve had, ever!  Soooo memorable too!  So impressed.