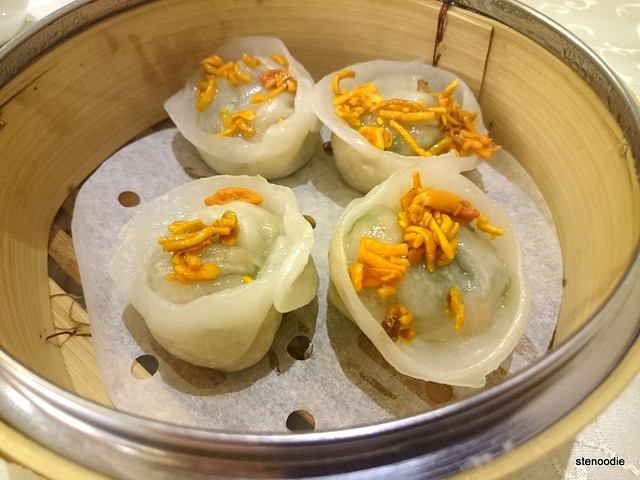 Located at 8425 Woodbine Avenue in Markham

For Buddha’s birthday this year, we decided on eating a vegetarian lunch after we visited the temple (naturally).  We went to Wutai Vegetarian Restaurant, which is located on Woodbine Avenue south of Highway 7 in Markham.  I knew of this restaurant’s existence but had never tried it out until now. 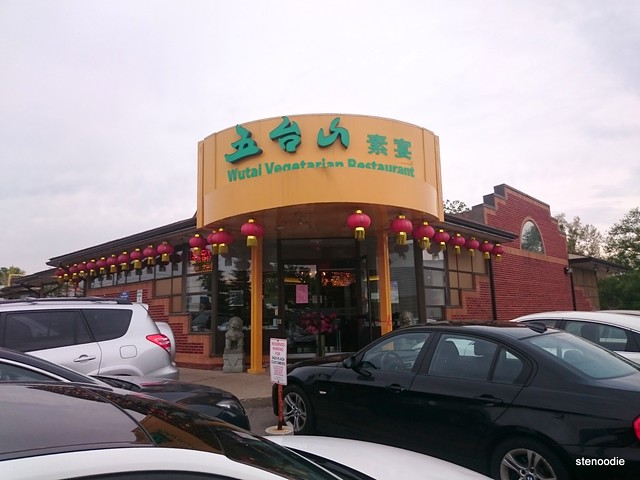 You can easily spot this restaurant from the street

By the time we got there, the special dim sum price hours were over.  You could still order dim sum from their order sheet but it didn’t seem like such a great deal anymore since you had to pay full price.  Regardless, we ordered a few items to share.  This restaurant is vegetarian which means that they feature specialties of dim sum with copycat meat dishes made with gluten usually or substituted with vegetable options.  It’s quite creative, these Chinese vegetarian restaurants! 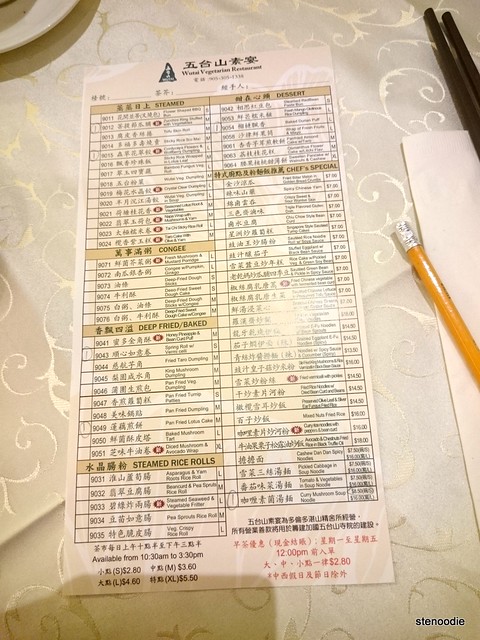 Even though we arrived at an unpopular time for dim sum, there were still quite a fair number of people in the restaurant.  The service here was pleasant as the servers were polite and efficient.  The restaurant isn’t very big, but it’s a comfortable environment.

The first to arrive was the Cordyceps Flowers & Wolfberry Dumpling.  The name made it seem very interesting so we ordered it to try.  This dumpling was very well made.  It was steaming hot when it arrived and the dumpling skin was smooth yet chewy.  The inside where the vegetables were was very soft and tasty.  I was pleasantly surprised with how great this tasted as it was a very simple dim sum dish. 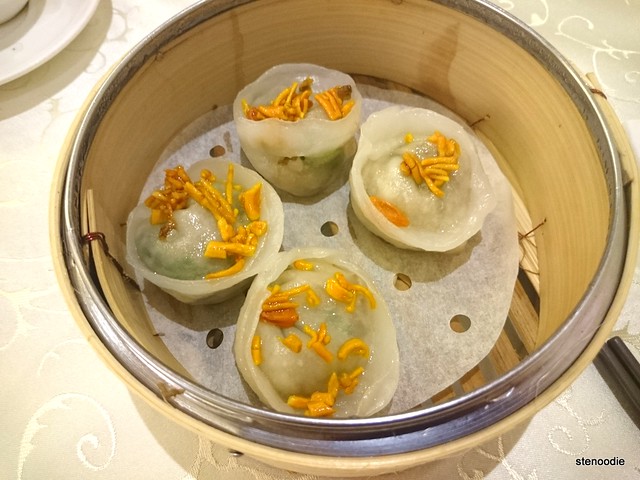 The second to arrive was the bowl of Curry Mushroom Soup Noodle.  We didn’t expect this to arrive that soon into our meal.  The curry soup base was a tad spicy and a little watered down, but the type of watered down curry wasn’t an unpleasant one.  It was just thin curry soup.  The noodles were not bad.  I liked that there were a lot of mushrooms in it.  It was quite a unique combination!  We didn’t end up finishing this and took the rest home. 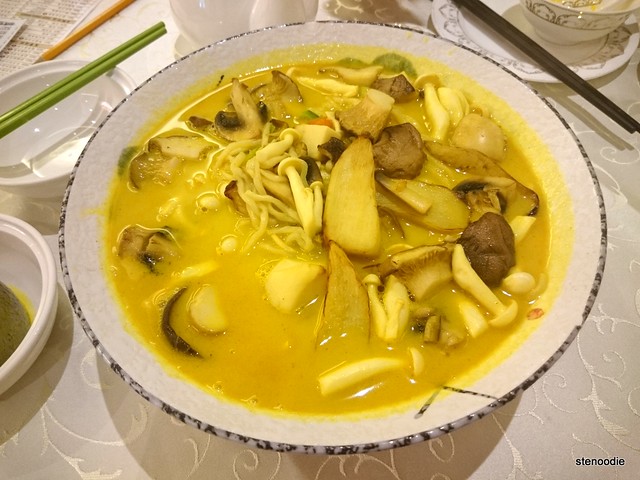 This Spring Roll with Vermicelli was also a surprising winner!  I would say that it’s one of the best made spring rolls I’ve had!  It was so crispy and freshly fried that it was so delicious.  It was fried perfectly; not too much which kept the outside skin crisp.  Yum! 😀 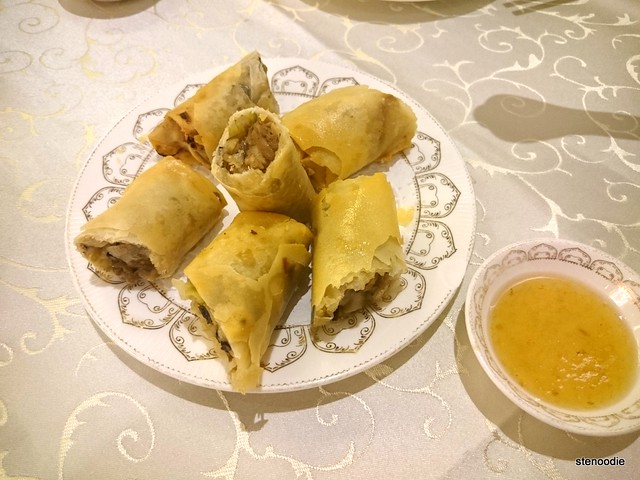 This Zucchini Ring Stuffed with Vegetables is a popular dim sum item.  Usually, the zucchini ring is stuffed with meat but since we were in a vegetarian restaurant, the inside of the ring was stuffed with vegetables like carrots and mushrooms.  It was really tasty as well!  Simple but delicious. 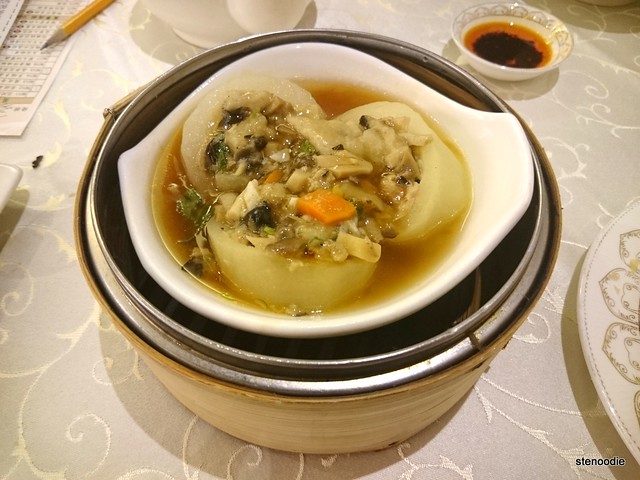 This Baked Durian Puff was quite large for its size and after finishing one, you will easily feel full because of the pastry and durian paste.  The inside didn’t contain real durian fruit, but it was real durian paste.  It was sooo fragrant upon arriving at the table.  If you don’t like durian, don’t order this dish as it’s true durian inside!  Not bad. 🙂 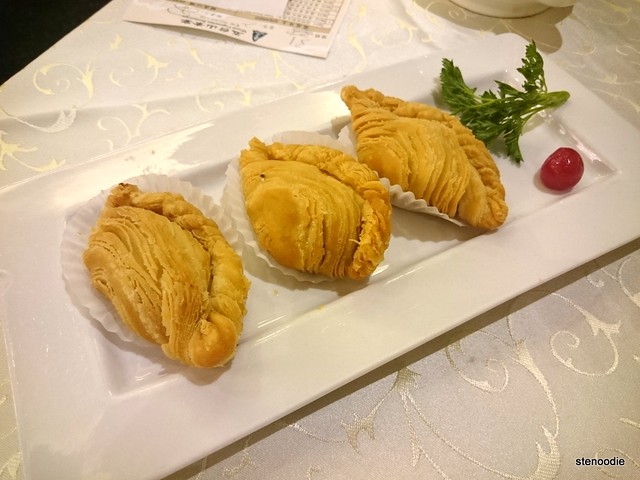 Lastly, the Pan Fried Lotus Cake was an interesting one.  This lotus cake actually contained a whole slice of lotus on the top.  It was pretty good but also very filling.  We also took the last one home because we couldn’t finish it all. 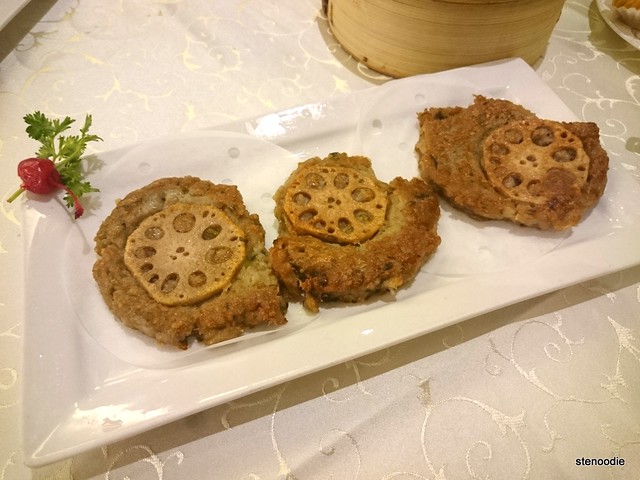 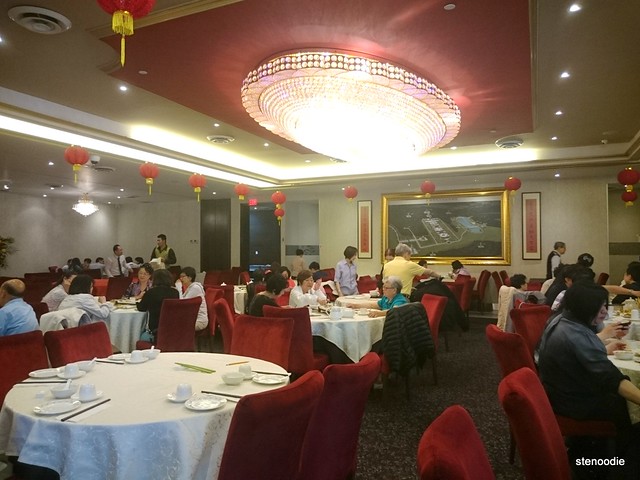 A fair amount of diners at 2 p.m. in the afternoon

All in all, the food at Wutai Vegetarian Restaurant was pretty good.  However, the prices were a little steep.  It’s great to visit every so often if you want good vegetarian food though! 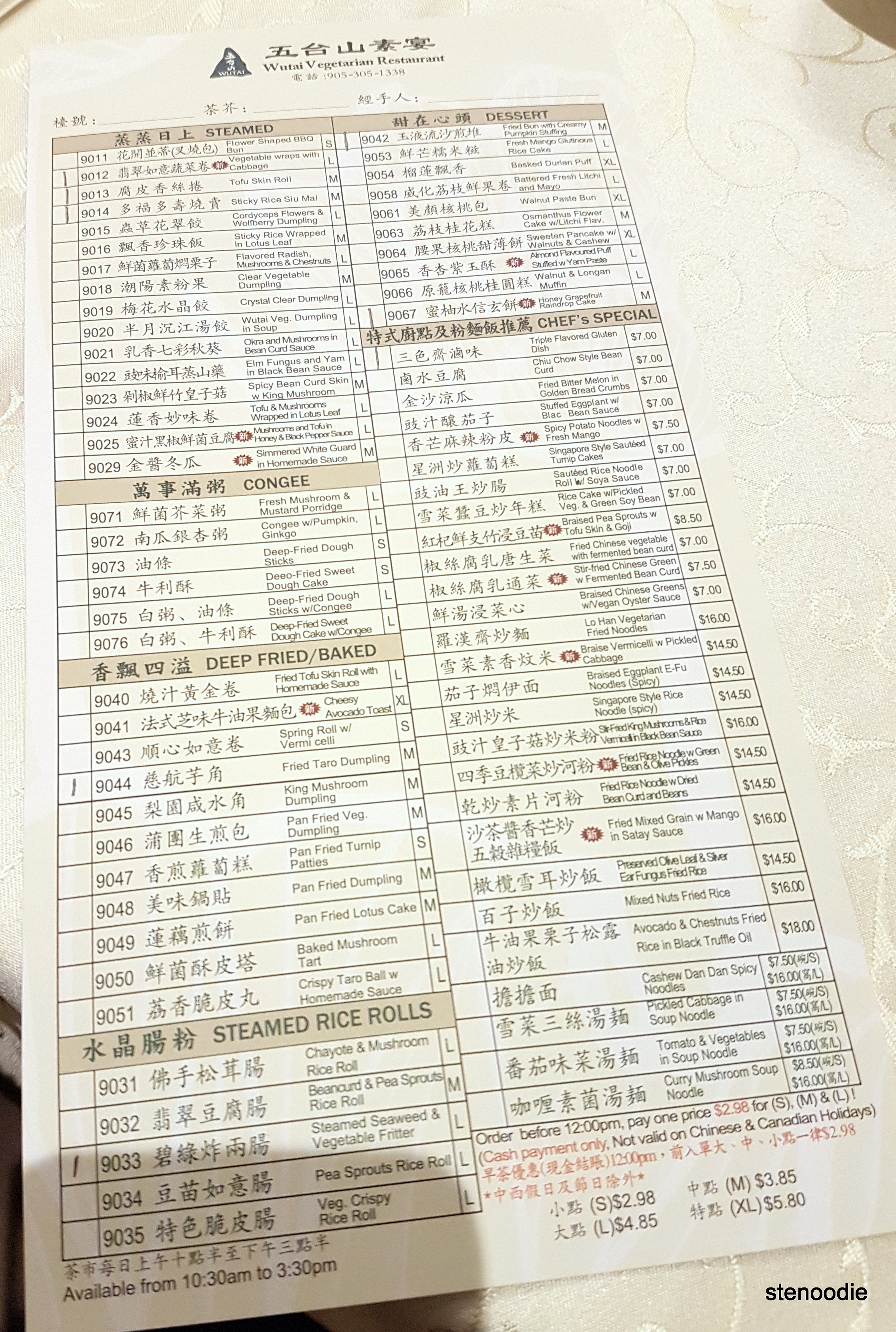 My friend Angel and I met up here after a year of not seeing each other for a vegetarian dim sum lunch.  It was a Sunday and we arrived at 10:30 a.m. when they opened.  There were already people inside when we arrived a few minutes after the restaurant opened.  Unbeknownst to me, if you order before 11 a.m., all of the dim sum dishes are only $2.98!  What a steal!  I didn’t realize this otherwise I would have ordered more of the medium and large sized dim sum dishes.

Although my first visit here (blogged above) was a bit lackluster, I found that I really enjoyed the food this time around.  Maybe it was because we ordered better choices this time and because we had a good chat, it made the overall meal much more enjoyable too.

I really enjoyed the Fried Taro Dumpling.  Instead of the usual taro and meat inside, they substituted it here with mushrooms.  It was very delicious! 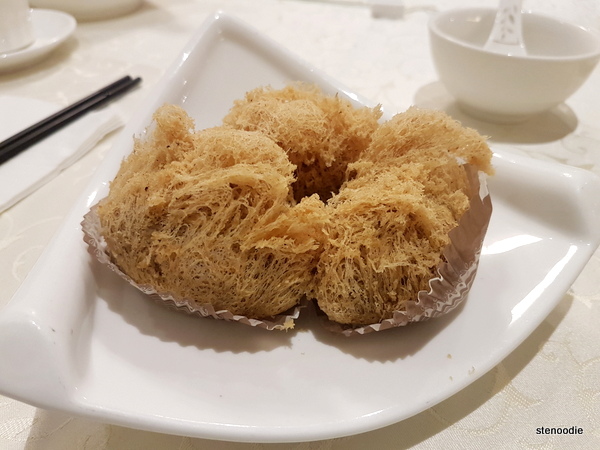 The Sticky Rice Siu Mai was also an unsuspecting favourite.  The sticky rice was like hearty comfort food to me.  I gobbled this up quickly. 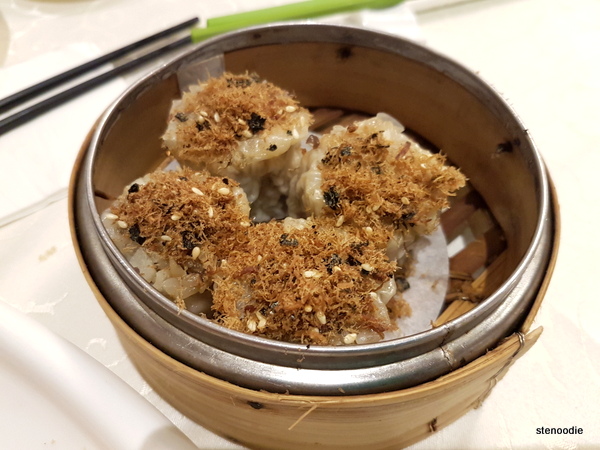 The Fried Bun with Creamy Pumpkin Stuffing was actually brought home since we had so much food.  When I ate it at home, of course it wasn’t as tasty as if I had eaten it there fresh at the restaurant. 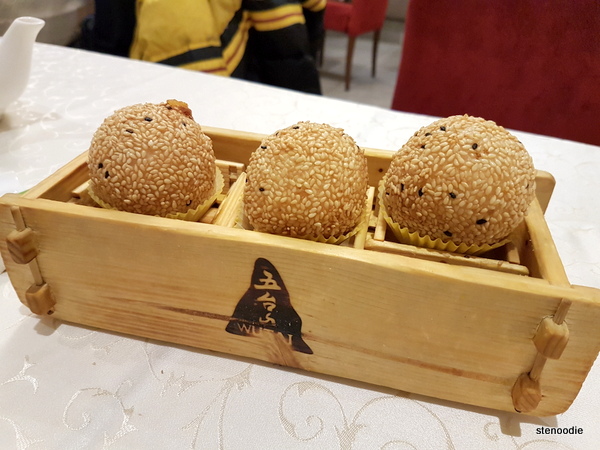 The Steamed Seaweed & Vegetable Fritter Rice Roll was also very good.  It was presented with each rice roll standing up vertically on the plate which made it look so fancy. 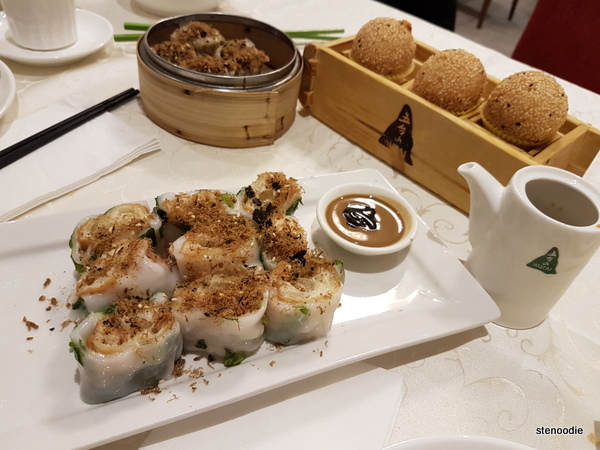 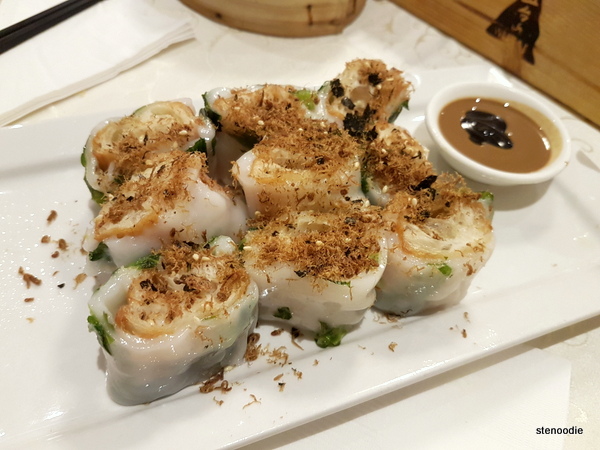 The Vegetable Wraps with Cabbage was very wholesome and tasty too. 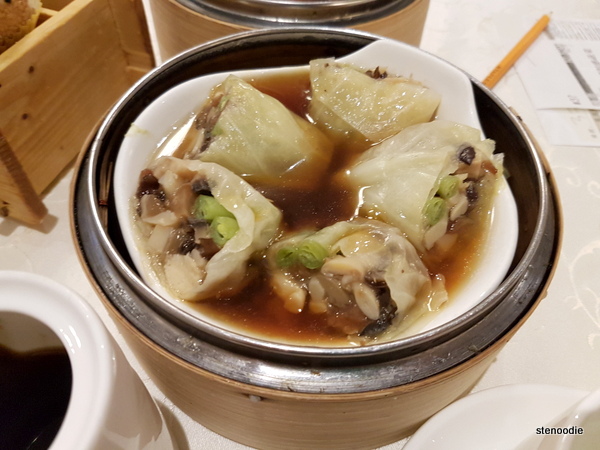 The Tofu Skin Roll was also very good.  Angel especially liked this one because it’s been years since she’s had this as a vegetarian style one — usually the ones at dim sum are filled with meat. 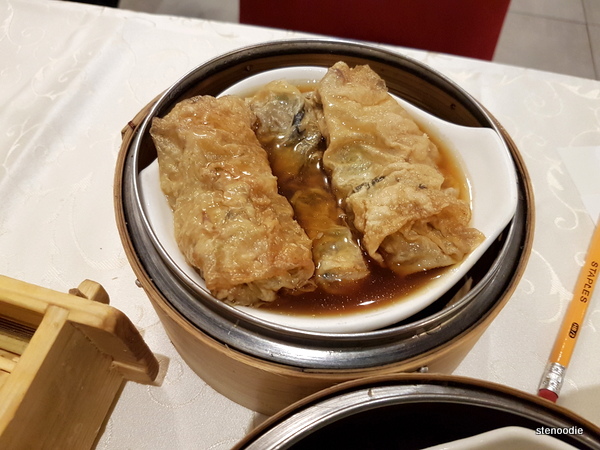 The Honey Grapefruit Raindrop Cake was interesting.  It really played off of the current food trends of a “raindrop cake” which I’ve had now here and here.  Unfortunately, it proved to be hype since it was just grapefruit jello and nothing too spectacular about it.  It was paired with some random tangerines and a mound of red bean.  Hmm.. 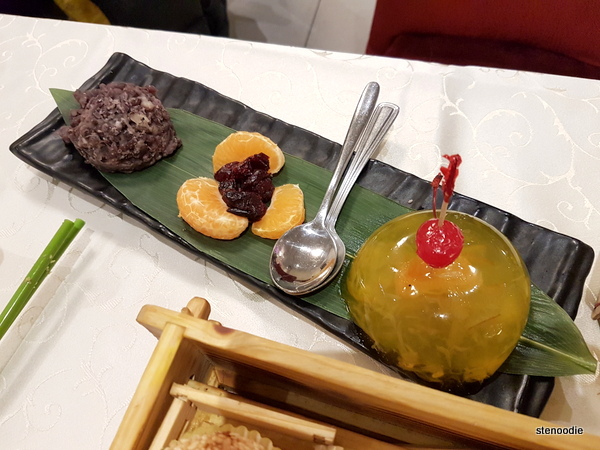 Lastly, we received the Triple Flavoured Gluten Dish; a classic Chinese vegetarian dish.  It’s assorted flavoured gluten and I really enjoyed it!  It was moist and flavourful. 🙂  (It’s also a Chef’s Special dish which can only be ordered after 11 a.m.) 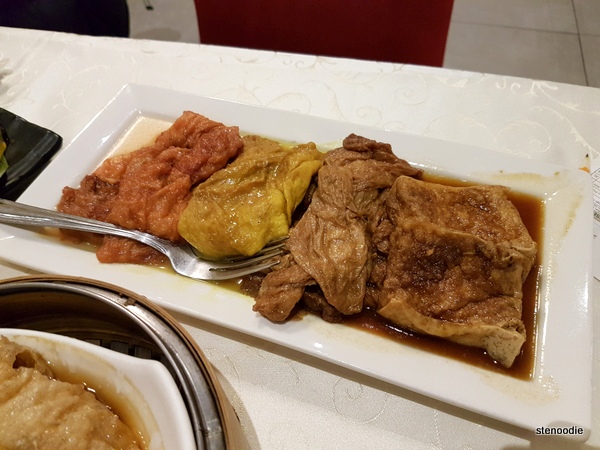 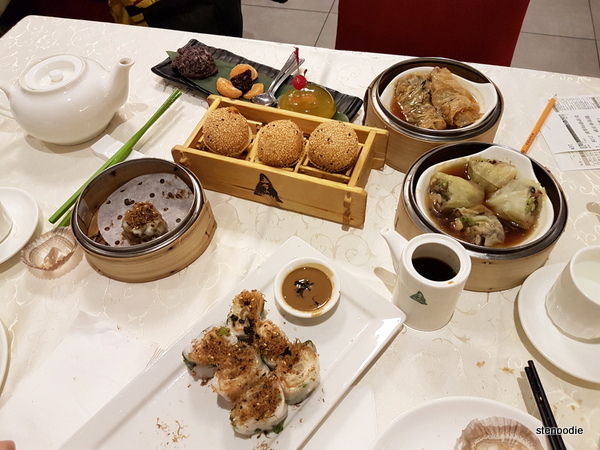 After this successful visit, my views of this restaurant went up considerably.  If you come here for dim sum, I highly suggest coming before 11 a.m. and place your order so that each dim sum is only $3 regardless of the size!  One thing I did notice is that we were both very full and I was very satiated after the meal.  Perhaps a reason for this full feeling could be that they use a lot of oil in their cooking… which perhaps isn’t that healthy even though everything was meat-free and vegetarian.