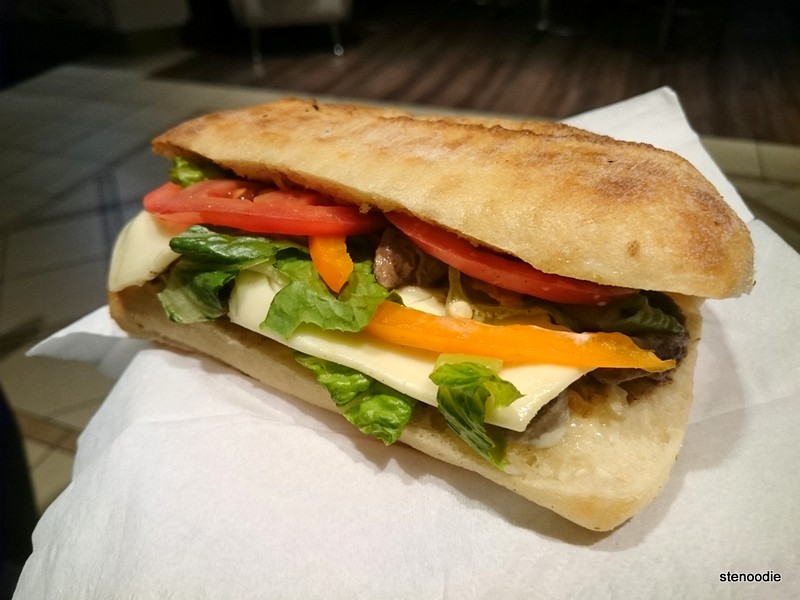 During our one-hour lunch on our Saturday training day in Montreal, we stuck to eating in the La Plaza Centre-Ville Evo building where there was a small café called Café Noir serving drinks, baked goods, salads, sandwiches, some hot foods, and some random daily essential items.  (If it were up to me, or if there were more people in my team who wanted to try out the local restaurants with me, I would have dashed straight towards the local food instead because there was clearly enough time during the one-hour lunch break… but I digress.)

Café Noir also has other franchise locations around Montreal, so this appeared to be a single pop-up shop located in the Evo building for people to grab a quick meal.  They don’t offer seating inside their café but there are some tables and chairs in a nearby “food court” area where you can lounge and eat (there is free wifi offered from the Evo Building too that you can use). 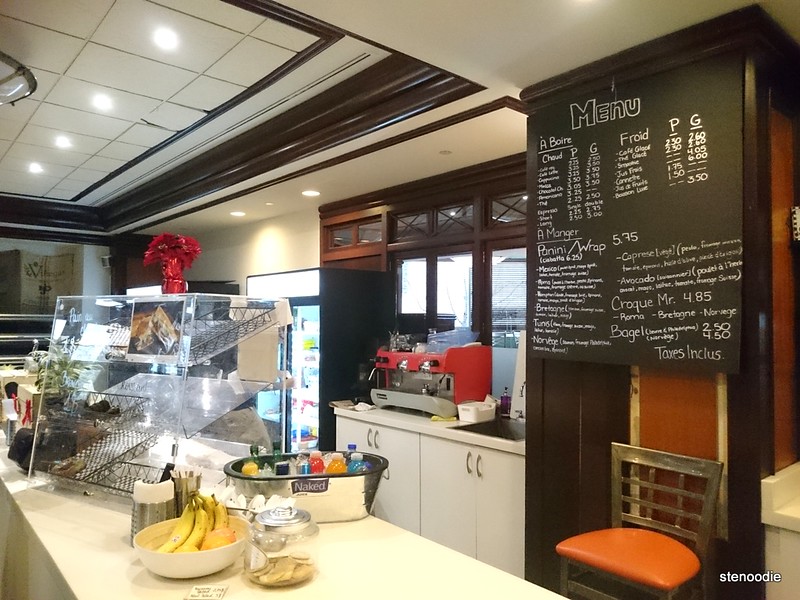 There were a quite a few of us, so we lined up to order whatever was on the menu.  There was only one staff working behind the counter.  He was manning the cashier and food making.  Here is where we ran into some problems.

One of our friends has experience working in the food industry and noticed that he was cross-contaminating items during the food making process.  He would touch his hair, touch the money and cashier, operate the grill, and make the food all without washing his hands.  My friend observed that while he was making the sandwiches, he dropped a slice of processed cheese onto the floor (it was wrapped in plastic, but that’s besides the point).  He bent down to pick it up and opened the plastic wrap and used the cheese on the sandwich without washing his hands.  When he was asked about it from my friend, he said that his hands didn’t touch the part that had fallen on the ground….  Um, it clearly did.  By picking up the cheese that was on the ground and unwrapping it to place on to the sandwich, already there are germs that would have transferred from the ground to the plastic wrap to the sandwich…. 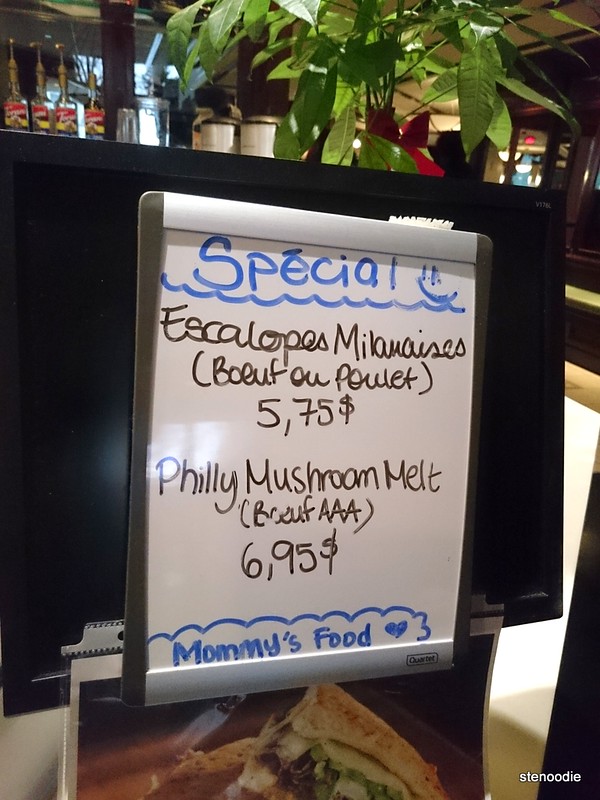 Food is the highlight of my day

This was a bit of a concern but I’m not going to harp too much about it.  All I have to say is that the earlier batch of sandwiches that he made were not contaminated, but that the rest of them (according to my friend) were cross-contaminated.

I ordered the Philly Mushroom Melt Sandwich on a ciabatta bun.  It was a good size for a sandwich that filled me up.  However, the cheese was barely melted.  The AAA beef was also very bland.  It was a very bland-tasting sandwich.  The ciabatta bun was as hard as a rock, so I make sure to chew slowly so that my saliva could cover the entire mouthful before swallowing to avoid the hard bun scraping the back of my throat when swallowing…  Also, a traditional “real” Philly Mushroom Melt Sandwich is supposed to contain beef slices, melted cheese, chopped onions, and sauteed mushrooms.  It shouldn’t contain any veggies like tomato or lettuce.  I’m quite sure that the guy making the sandwiches confused my order with everyone else’s since the other guys got the “Bretagne” panini which had jambon, Swiss cheese, tomato, lettuce, and mayo in it.  -_-  However, for the sake of staying together with the team, and for the sake of not complaining too much about a lunch, this had to do.  (As a foodie, I really do make so many sacrifices when eating out with the team that I never mention….) 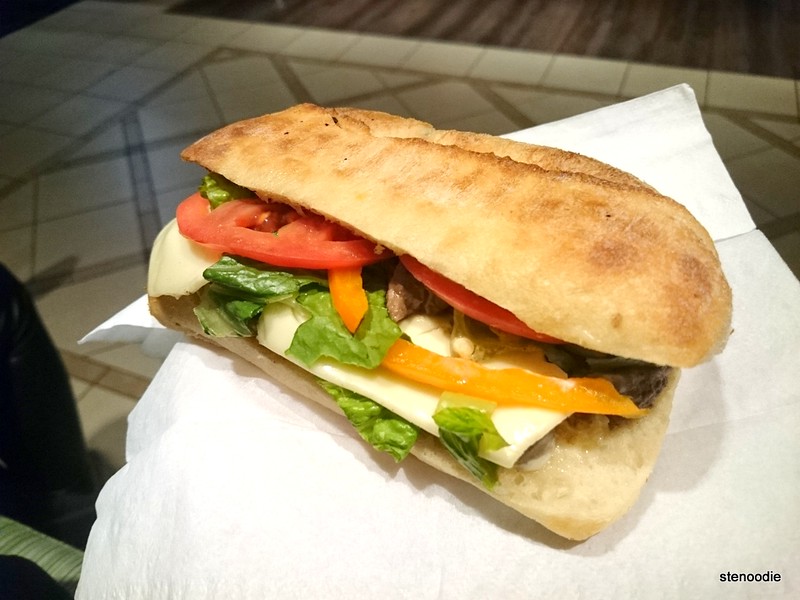 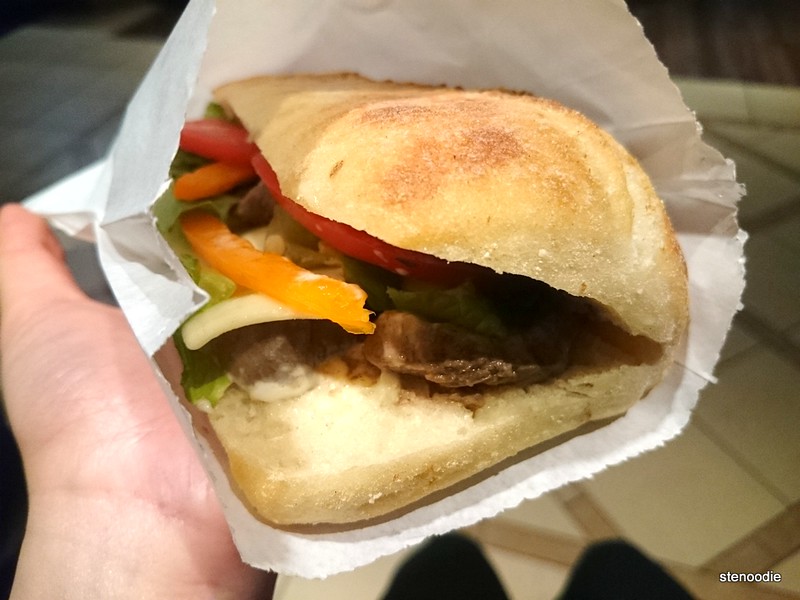 “Philly Mushroom Melt”. This should be on a hoagie roll

Since we were there for professional reasons, we didn’t want to make it a big deal, but I’m sharing my thoughts here with you about my experience. 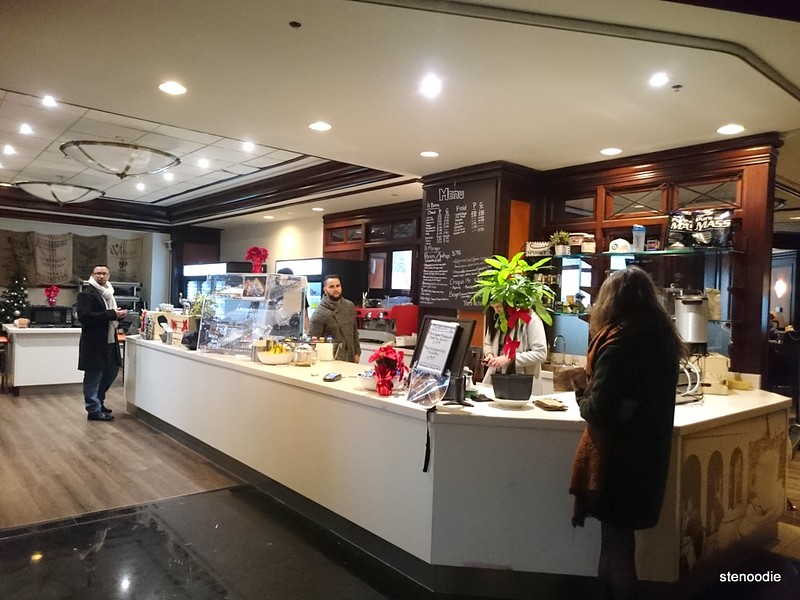 I took this picture after I was done eating my sandwich. By this time, there were two new staff members working

Also, since there was only one person working there when we arrived, it took an awfully long time for us to get our food.  We must have waited from 15-20 minutes for the paninis and sandwich.  In that time, I probably could have walked across the street to buy something else that would have been worth my money in taste and time. 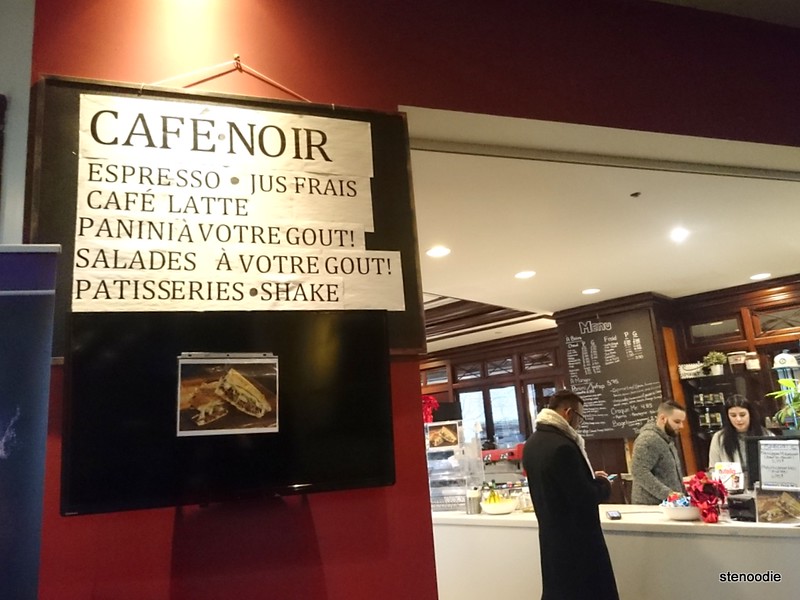 Café Noir. I firmly have faith that the staff member who made our sandwiches was innocent and inexperienced and naive, but still, Café Noir, can you make sure your staff is better trained in food handling first?!

Alas, my advice is that you should try not to order sandwiches from this place if you see that the person working there is not wearing gloves or they don’t seem to know what they’re doing… When we left, we noticed that there were two more staff members that finally showed up to start working behind the counter too.  One of them had gloves on and actually used tongs to handle the sandwiches from the sandwich press instead of just his hands (unlike the earlier staff member).  Maybe the local health and food authorities should also look into this place to make sure that they’re operating safe food handling 100% of the time…..

7 Responses to Lunch at Café Noir