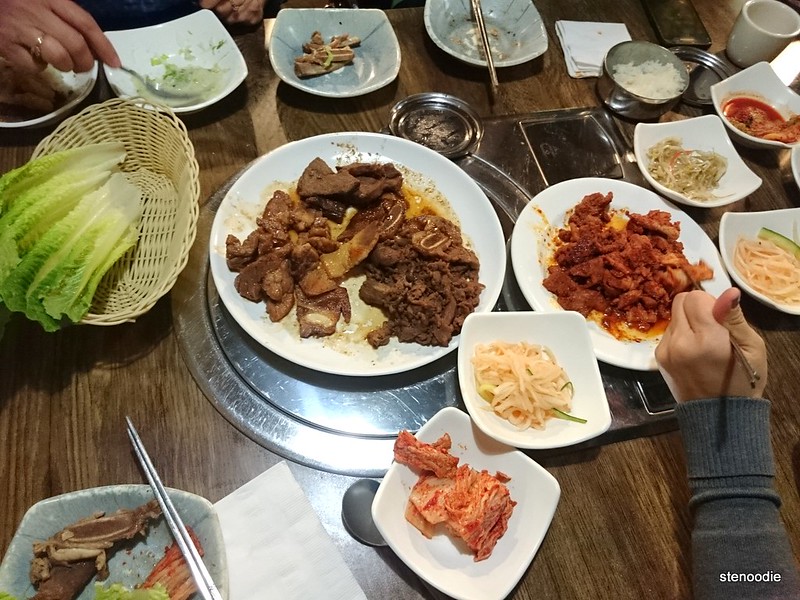 For our New Year’s Eve dinner, the last dinner of 2015, we went out to Seoul BBQ Restaurant to eat when we were in Calgary.  Seoul BBQ Restaurant is a Korean BBQ restaurant where you either get to order a la carte from their menu of traditional Korean dishes or you can choose to eat from the all-you-can-eat BBQ menu where you get to grill your own meat on the Korean grills, a traditional and fun way of cooking and eating food. 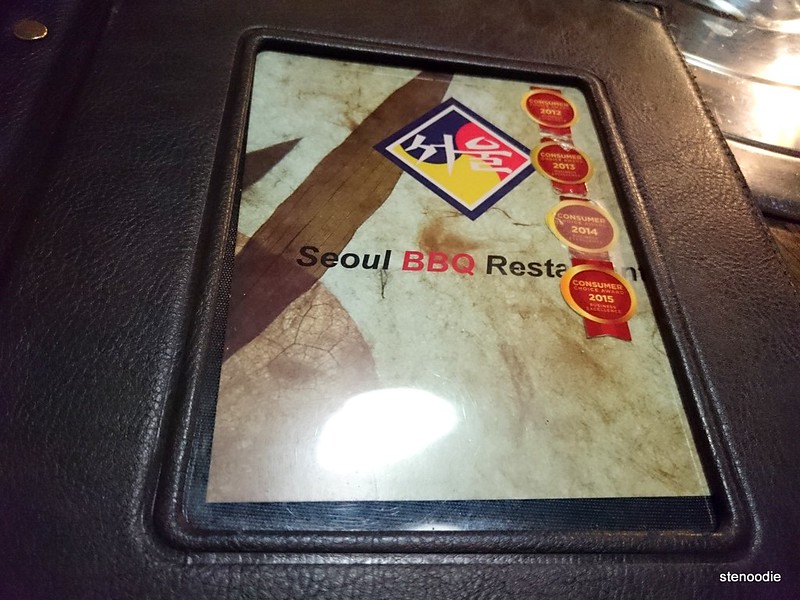 Seoul BBQ Restaurant in Calgary — a pleasure to visit and dine in!

We arrived there at 7 p.m. (good thing we had pushed back the reservation to 7 because we had originally booked it for 6 and with our huge late lunch at Shibuya, it would not have been a good idea).  There weren’t too many people there on this new year’s eve night but the space of Seoul BBQ Restaurant is large enough for many large parties — they have a lot of long tables.

Our party of 7 people chose the all-you-can-eat BBQ menu which included lots of banchan side dishes, onion salad, and rice.  In terms of the meat selection, there were 9 types very neatly laid out on the menu: 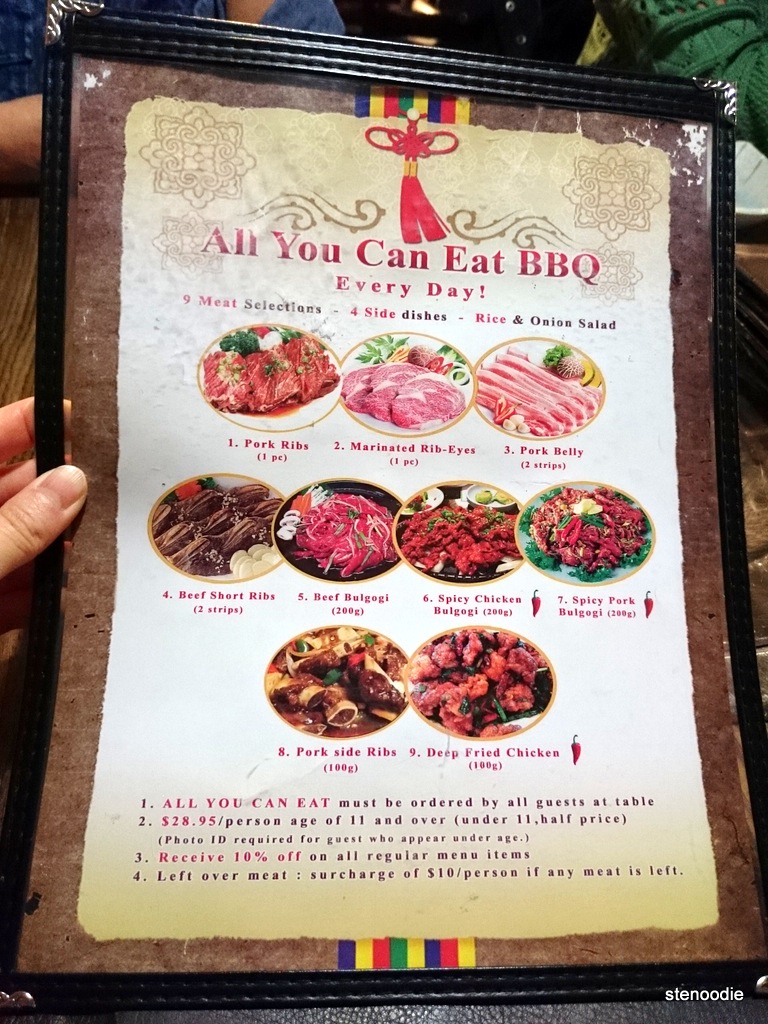 All You Can Eat BBQ with 9 types of meat selection for $28.95 per person

I have been to several Korean BBQ places before and this was the first time that I’ve seen pork side ribs and deep fried chicken offered too as part of the all-you-can-eat meat.  I was pretty excited to try it!

Thus, we ordered one of each meat item on the menu and there they were presented to us on plates.

First, we each received a plate of onion salad (this was very refreshing), rice in a metal bowl to keep it warm Korean-style, and four side dishes of kimchi, bean sprouts, potatoes, and pickled radish. 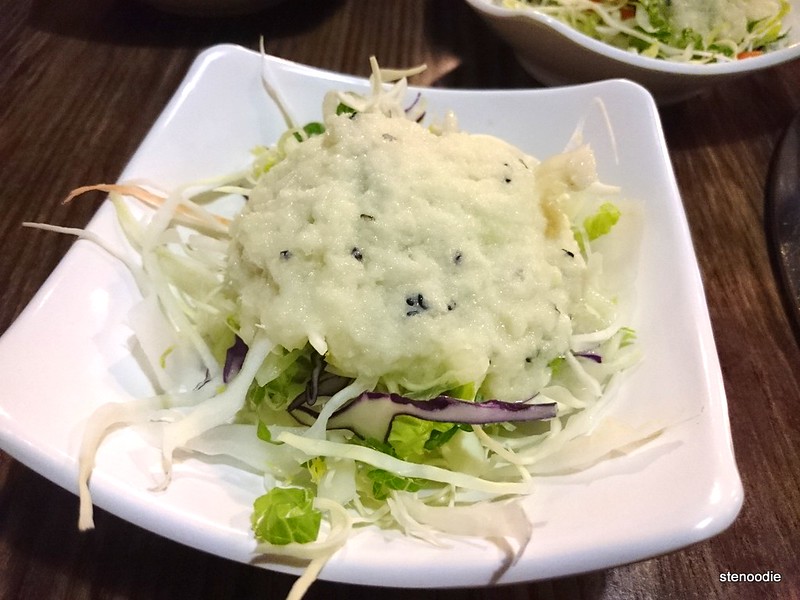 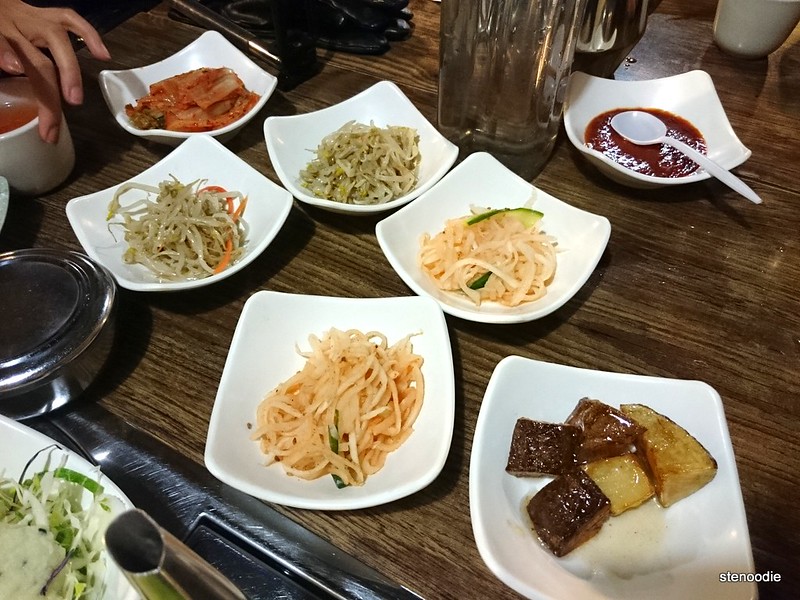 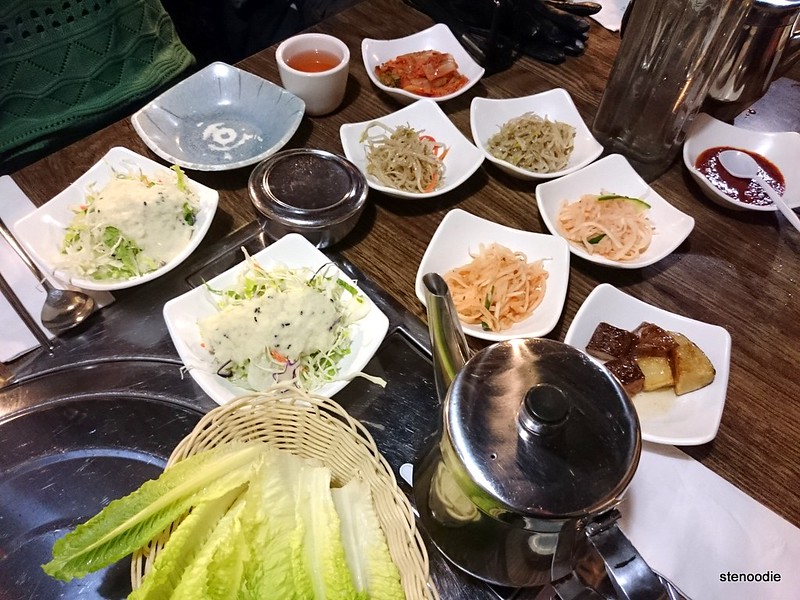 The napa cabbage was extremely crunchy and fresh! 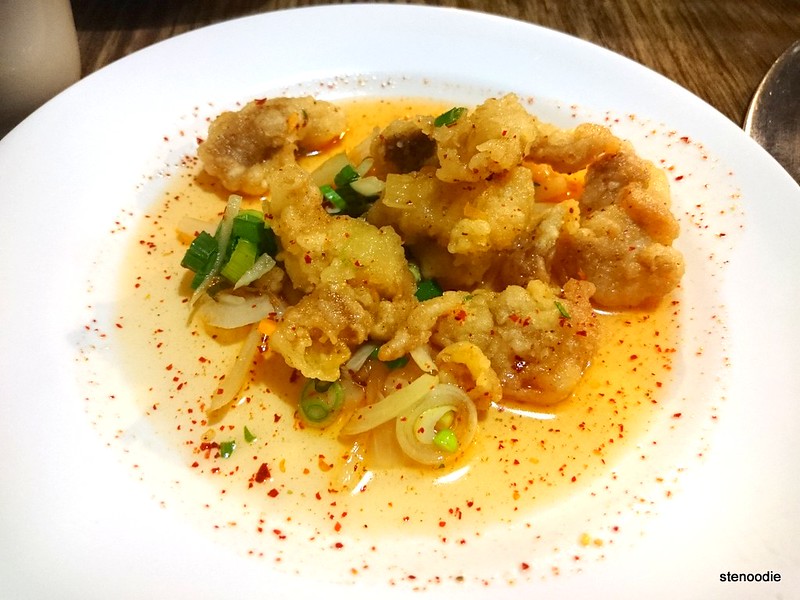 On the other hand, the pork side ribs were absolutely incredibly delicious, tender, and fall-off-the bone soft!  It was so good!!  These reminded me of the amazing lamb ribs that I had at Byblos. 🙂 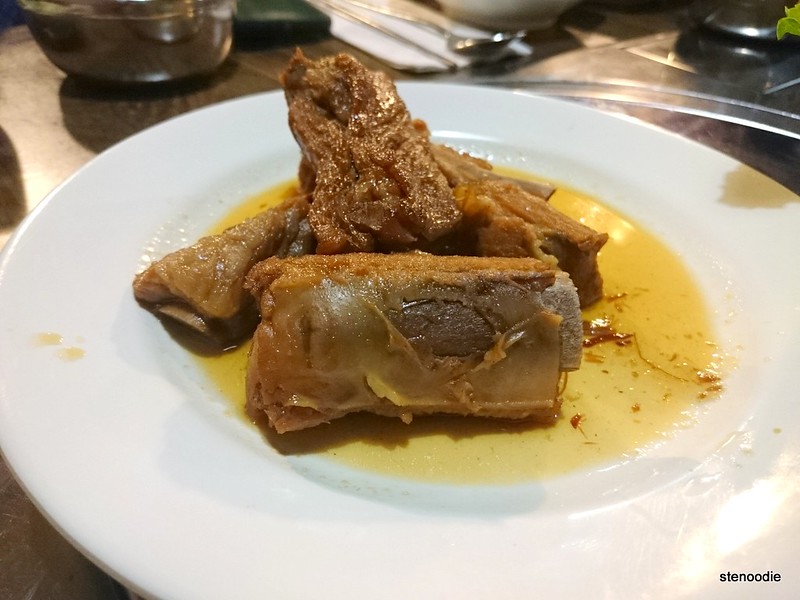 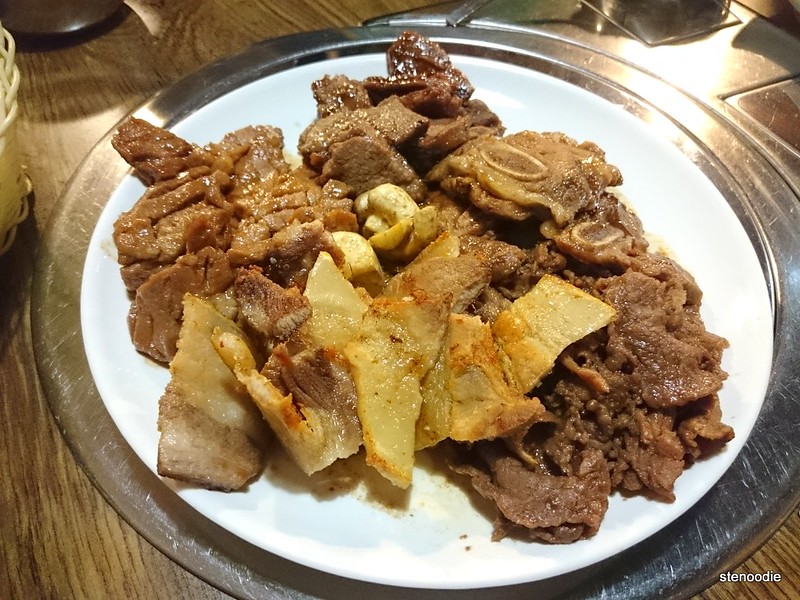 Then, the huge platter of meat arrived with our selection of seven meats.  The kitchen simply grilled everything and put it on a platter for us.  The foodie in me died.  I’m exaggerating, but what fun is Korean BBQ if you just ask for the kitchen to cook and grill up all the meat for you in the kitchen and then serve it to you on a plate?  All-you-can-eat BBQ is supposed to be DIY — do it yourself!  That’s the whole fun of the process!  (It’s almost like going to a hot pot restaurant and instead of boiling all the food yourself in the pot, you ask for the kitchen to boil everything for you and put it on a plate and then everyone all eats from that plate.)  …  In my opinion, eating the meat from the plate took the fun out of the Korean BBQ experience.  It was a little disappointing, but nobody seemed to care as long as there was food on the table, so I didn’t say anything. 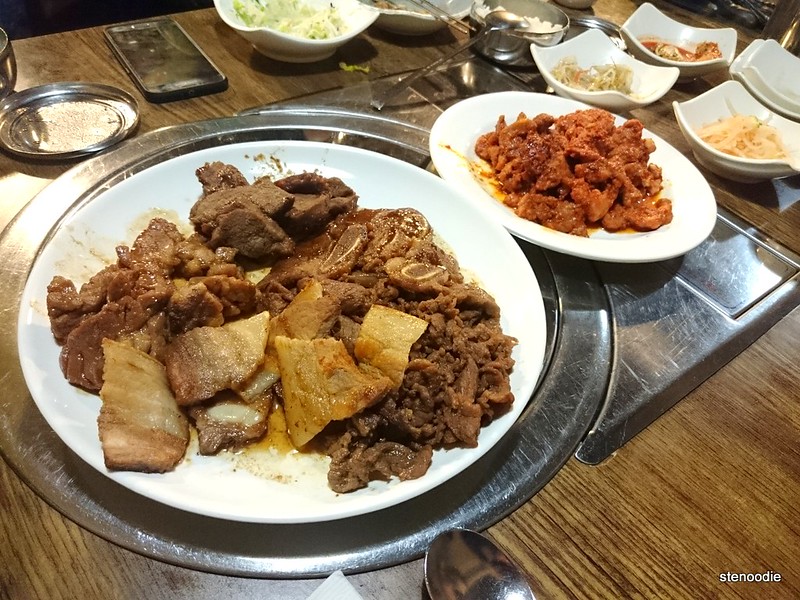 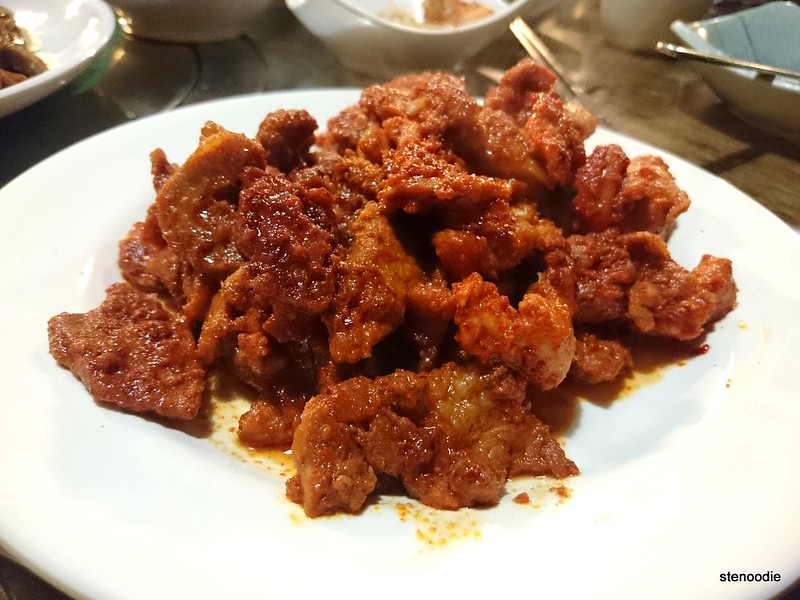 Out of all the seven grilled meats that we had, I liked the beef short ribs the most.  The spicy chicken bulgogi was quite spicy but cooked very authentically in Korean style.  The beef bulgogi could have been way more tender and the pork belly also could have been more tender too.  The pork belly was actually overcooked so that it was hard and dry to chew. 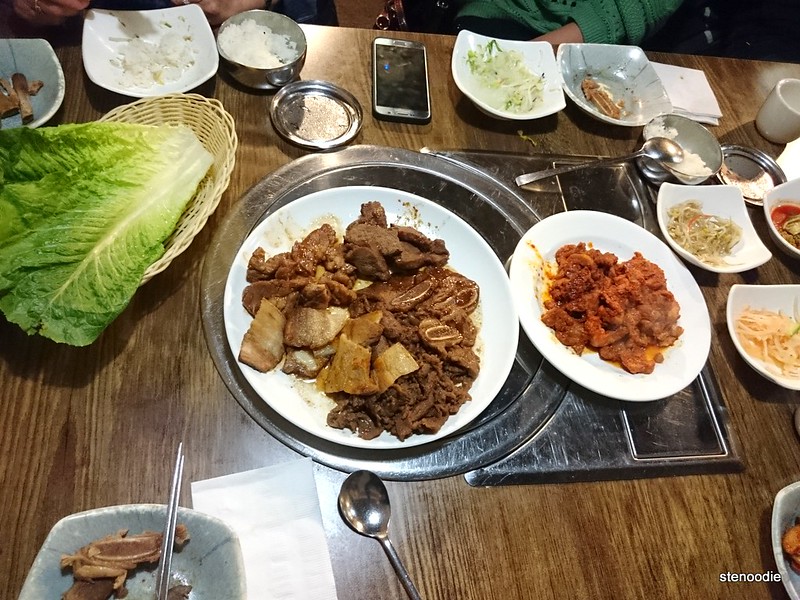 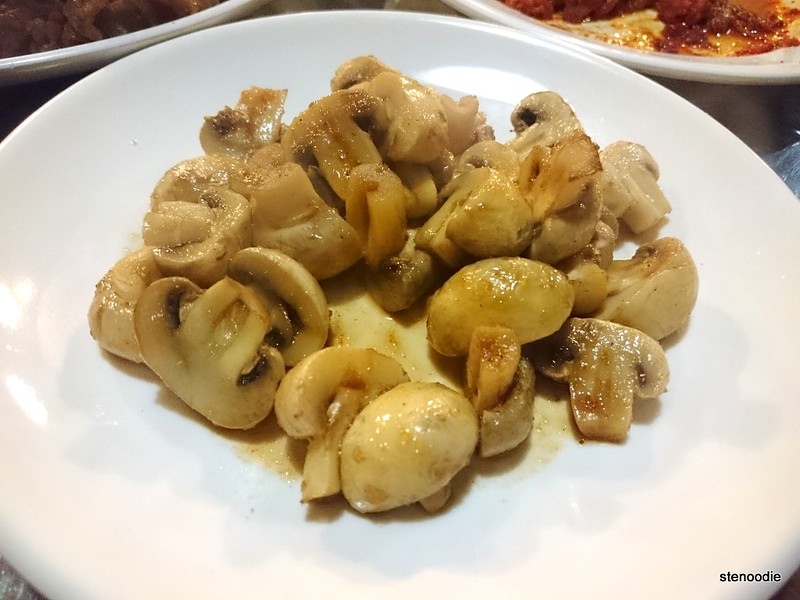 I ate a lot of the vegetables and side dishes and we even ordered a side of grilled mushrooms (that were so good!) because we had too much meat on the table.  We actually weren’t able to finish the platter of meat that we had on our side of the table either.

Alas, we were full and because we had a lot of leftover meat on the table, many of us tried to conceal it by stuffing the meat underneath plates or inside the rice containers … it was to avoid a $10 per person surcharge if we didn’t finish all the meat that we had on the table (…not to say I haven’t done it in the past either but I haven’t ever not felt guilty about it).  Again, none of this was any fault of the restaurant’s.

Overall, the restaurant did a really good job cooking the pork side ribs though because I really enjoyed that dish.  Everything else…. I would prefer just an authentic Korean style cooking experience.  Next time! 🙂 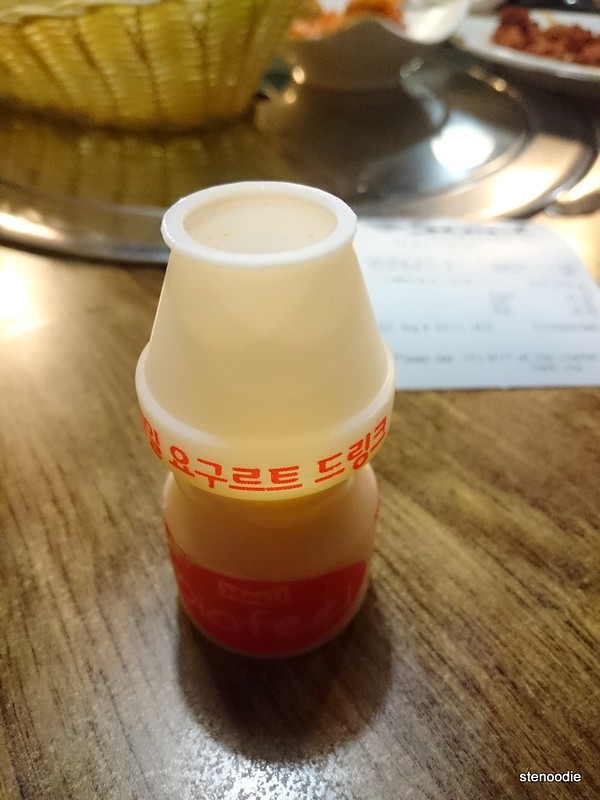 Have you been to Seoul BBQ Restaurant in Calgary before?  How did you enjoy it? 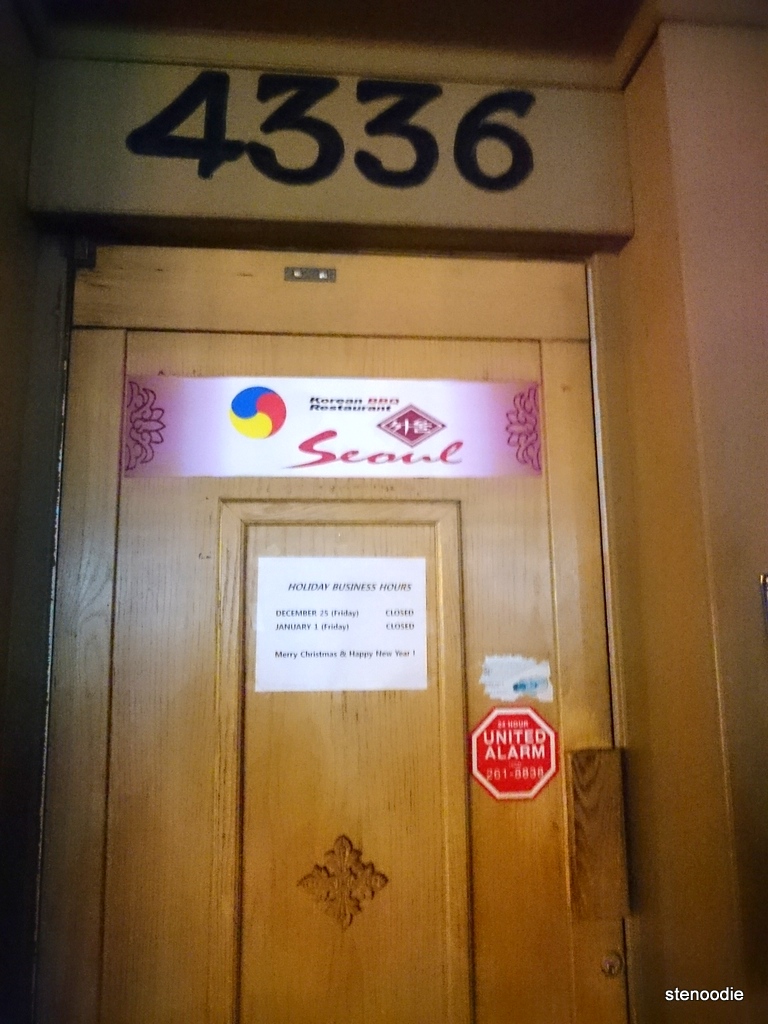 It’s a non-descript restaurant from the outside. This is what the doorway looked like 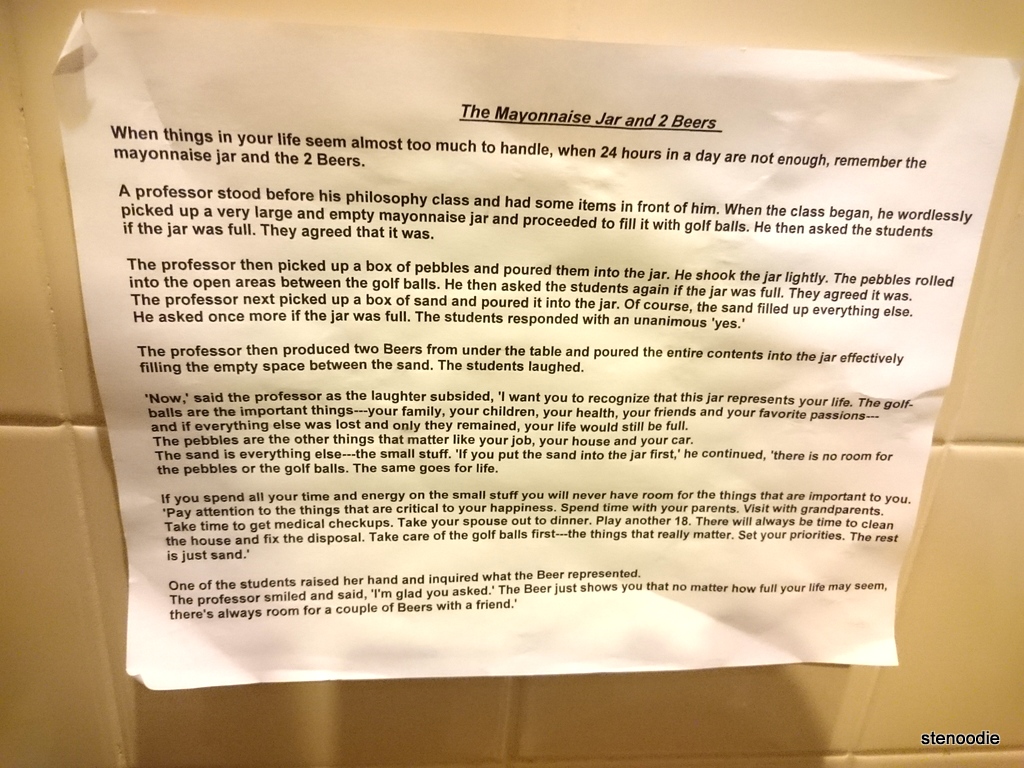 I saw this wise story in the bathroom. I’ve read this before!

(Looking back at my experience, I was and am grateful for this opportunity to dine out during new year’s eve with my friends at a Korean restaurant; please don’t get me wrong.)