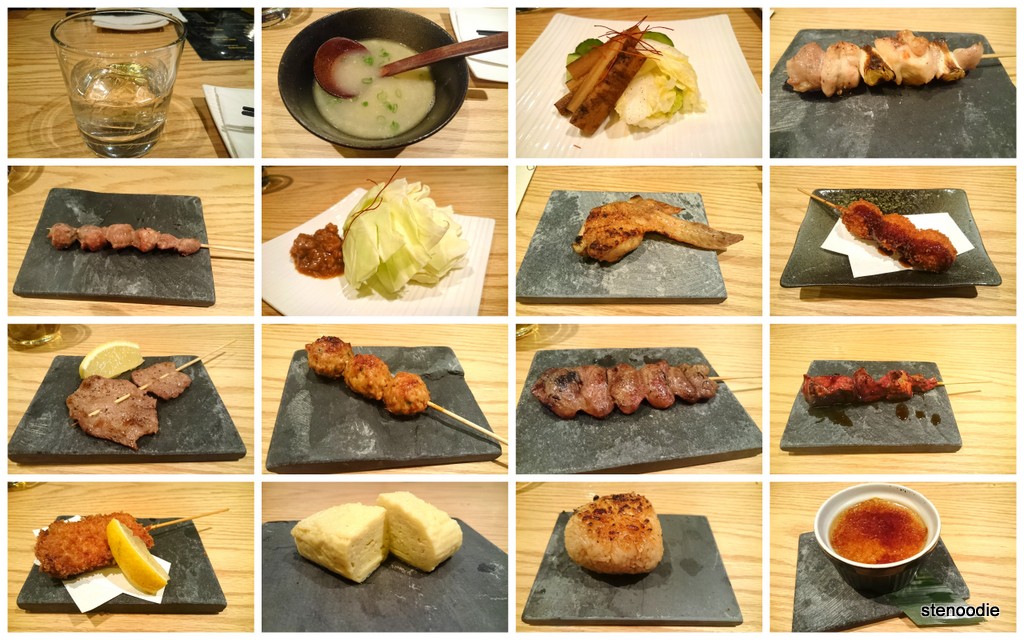 I am always so thankful for these blogger tasting events!  Thank you Stella, Kinka Family, and Kintori Yakitori for extending the event out to me! 🙂  Nowadays, there are a lot more food “instagramers” than food bloggers — simply because it is so convenient to snap gorgeous-looking photos of food and share them on instagram and it requires a little less work than writing a full blog (feel free to contest this with me).  With that said, I was pleased to be able to chat with other food instagramers and food bloggers on this night during the Blogger Tasting event at Kintori Yakitori and make some new friends.  It was my pleasure to chat with them and see what their tips and tricks are for sharing food photos.  On this night, Chef Hiroke Takai was the one who was in charge of the menu and food.  Thank you! ^_^ 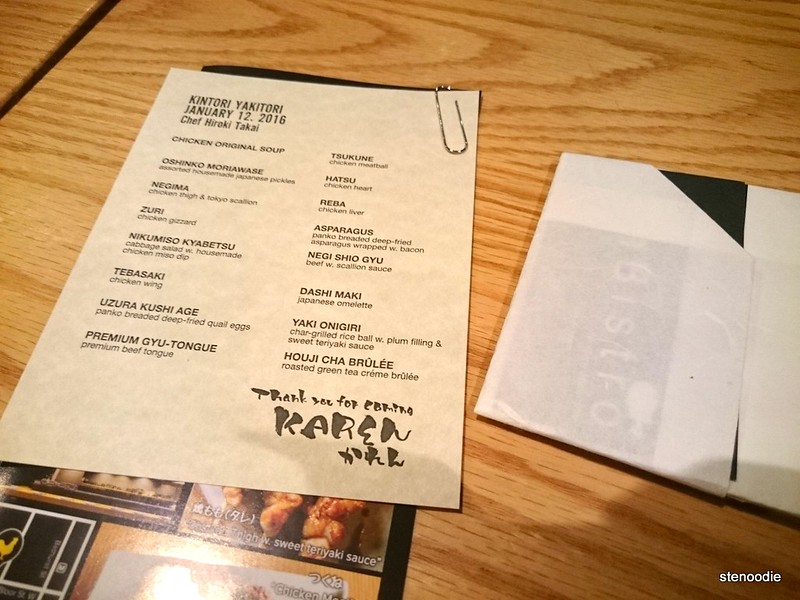 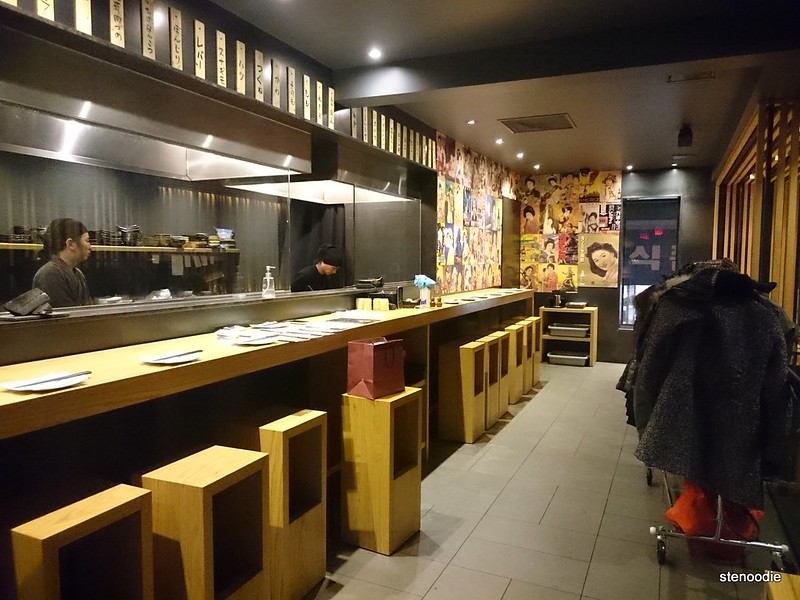 The tasting event was slated to run from 6:30 p.m. to 8:30 p.m.  I arrived a little early at 6:10 p.m. and got settled in.  Kintori Yakitori is located on the second floor of 668 Bloor Street West and they are part of the Kinka Family serving Japanese yakitori (skewers).  On the lower level, they have Kinton Ramen.  Since opening in winter of 2014, they have now expanded their menu so that you can also order ramen from downstairs and the downstairs patrons can order skewers from the upstairs grill.  It’s quite neat!

I remember coming for the first time to Kintori Yakitori in April of 2014 and having a great experience.  You can view my blog review here!  I was really excited to return again for their blogger’s tasting event and try out some new dishes (and/or revisit some old ones) :). We didn’t actually begin the event until close to 7 p.m.  While everyone was arriving and settling down, Stella gave each of us individualized menu cards of what we would be expecting for the night.  We also received a bundle of the Kinka Family business cards all folded up very neatly into a little square.  So cool!  Our server also took our drink orders (our first drinks were on the house!). The Shochu Japanese Vodka (Nishi no Miyako) with sweet potato 25% alcohol instantly caught my eye.  I’m not one to get drunk easily so I wanted to try this out!  It came in a glass of 3 oz and was a transparent colour.  It definitely tasted like vodka but wasn’t too strong.  There was a very slight sweet aftertaste which I attributed to the sweet potato.  It was definitely a solid drink. 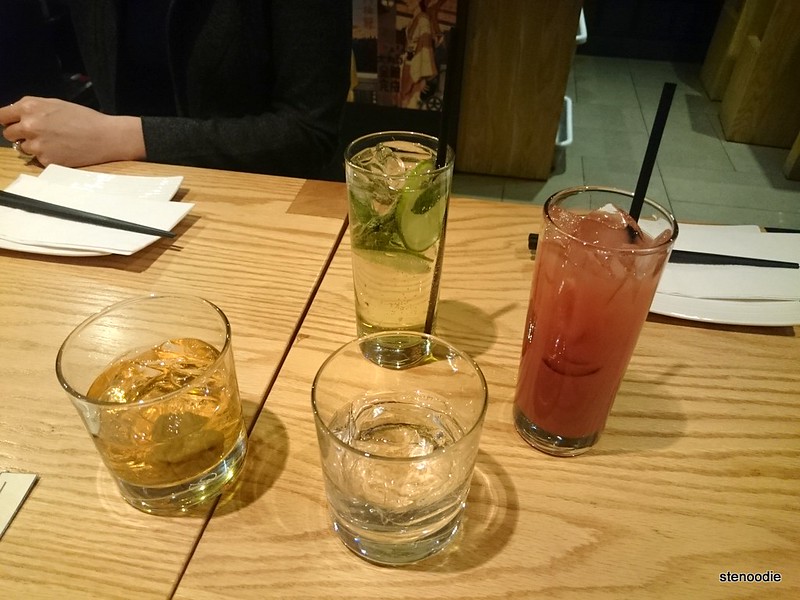 On the menu that night from Chef Hiroki Takai included a whooping 16 courses including dessert!  As a foodie who loves variety, I was thrilled!  I couldn’t wait to try everything!  Keep in mind though that because most of the items are single yakitoris, 16 courses is actually quite a decent number for a tasting. 🙂 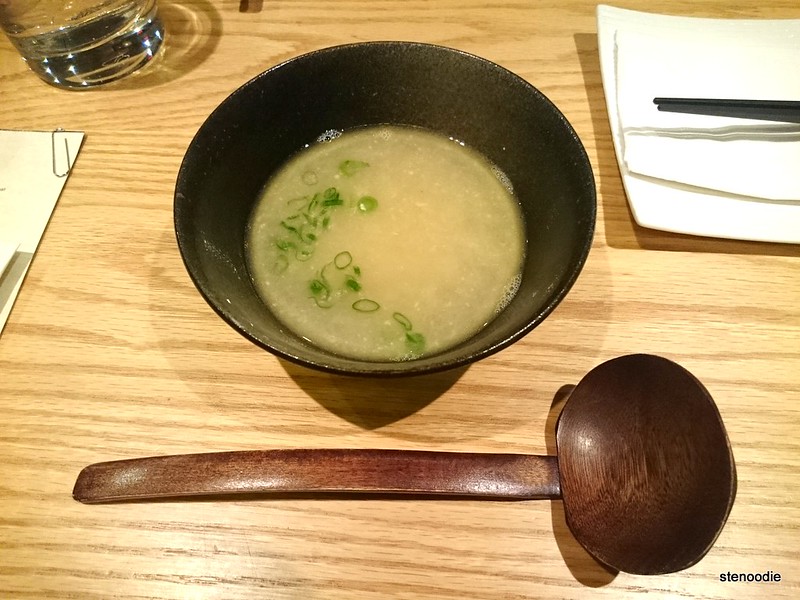 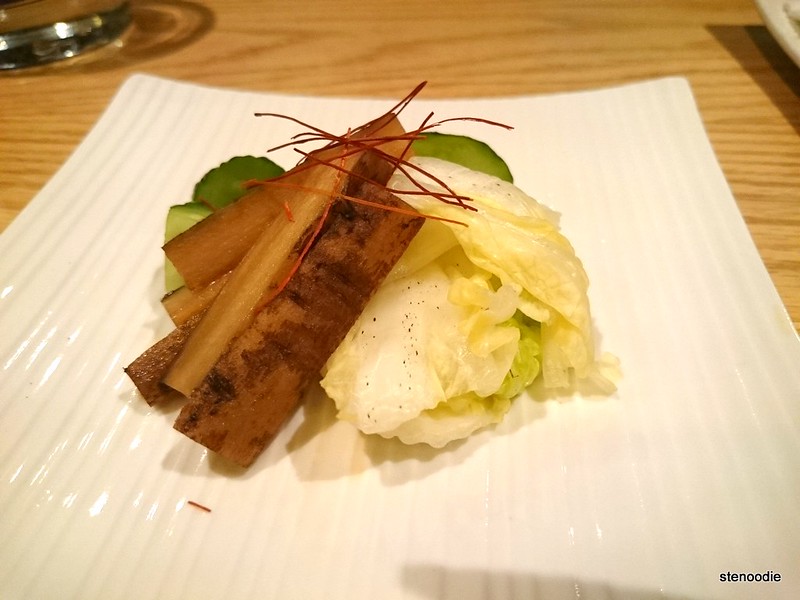 Next up, we had the Oshinko Moriawase — assorted housemade Japanese pickles.  It arrived on a bed of sliced burdock and cabbage as well.  The pickles were extremely crunchy to the point that you could hear yourself crunch over them with each chew.  The burdock was new to me.  It tasted like a root and was firm.  It was a good palate start for the night. Our first yakitori arrived on the table!  Each person received their small slab with the Negima (chicken thigh and Tokyo scallion) on it.  The photoshoots commenced!  I observed that some food bloggers took a few quality pictures before beginning to eat while most of the food instagramers took a long time with the pictures before eating.  It was quite an interesting experience.  Nevertheless, this Negima was a little bland in my opinion.  The chicken thigh was definitely firm and tender though; it was cooked nicely.  I just thought it needed a little more salt. 🙂 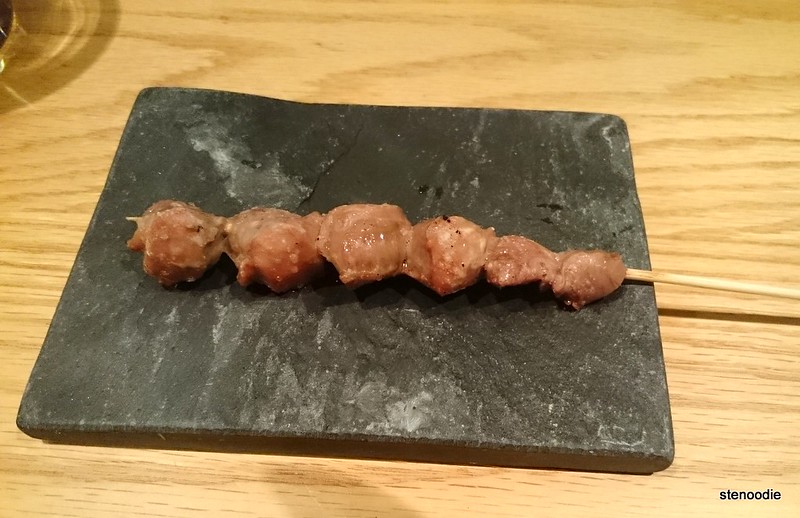 The Zuri (chicken gizzard) was next.  I absolutely loved this one!!!  I thought this one was cooked perfectly and seasoned perfectly.  It had a hint of salt on it that made it incredibly tasty.  It just so happens that one of our fellow foodies at the table didn’t have a liking towards gizzards so I was able to have some extra pieces. 😀 To cleanse our palates a bit, the next course was a Cabbage Salad with Housemade Chicken Miso Dip called Nikumiso Kyabetsu.  It was an interesting dish and I’ve definitely never had this before.  There were slices of fresh cabbage on the side while the housemade chicken miso dip was in a small pile to the side.  Most of us ended up eating it by taking a bit of the dip to place into the centre of a slice of cabbage and consuming it like a chip with dip on it.

I actually found this simple dish very tasty.  I thought that the bland cabbage salad fit so well with the salty miso dip.  I’m not sure if everyone enjoyed this one because I saw not everyone cleared their plates. XD

After that salad, we continued onwards with the yakitori.  We were actually running a bit late on time and one thing that could have been done better for the event (my suggestion) is to serve some of the skewers together on a plate instead of individualizing each one.  However, I did appreciate eating each one by itself so that I could focus on the taste and that each one was fresh off the grill.  There’s really no rushing when it comes to quality food. 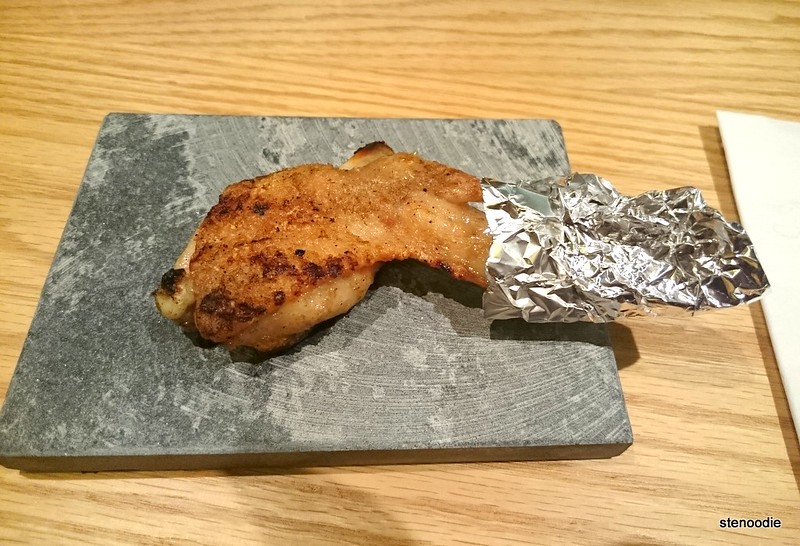 The Tebasaki was a grilled chicken wing.  I really appreciated how they wrapped up the wing tip with an aluminum foil so that it could be eaten utensil-free and that our hands can be kept grease-free as well.  I really liked the taste of this chicken wing (we had to be extra careful as it really was fresh off the grill and extra hot!) and it was seasoned very deliciously.  Yum! 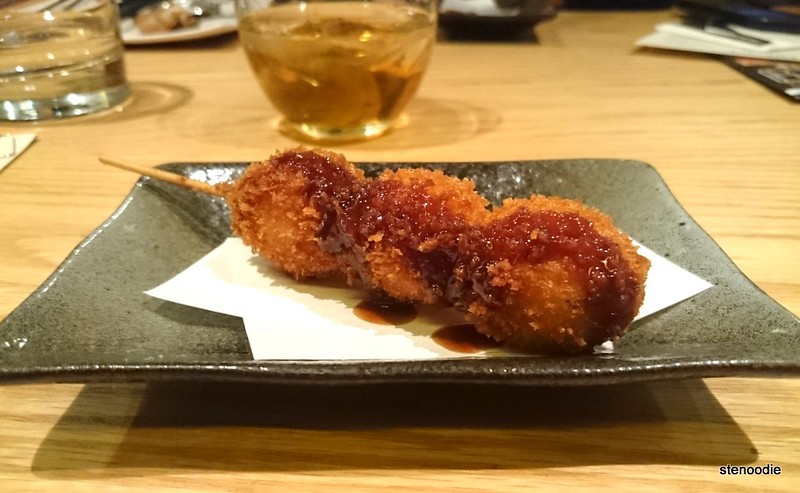 The Uzura Kushi Age was a panko breaded deep-fried quail egg of three.  I’ve never had fried quail eggs before!  Each one was nicely coated with panko and deep-fried to a light crisp.  The inside of the quail egg was perfectly cooked.  This was such a unique yakitori!  It was definitely one that I wouldn’t have thought to order to try myself. 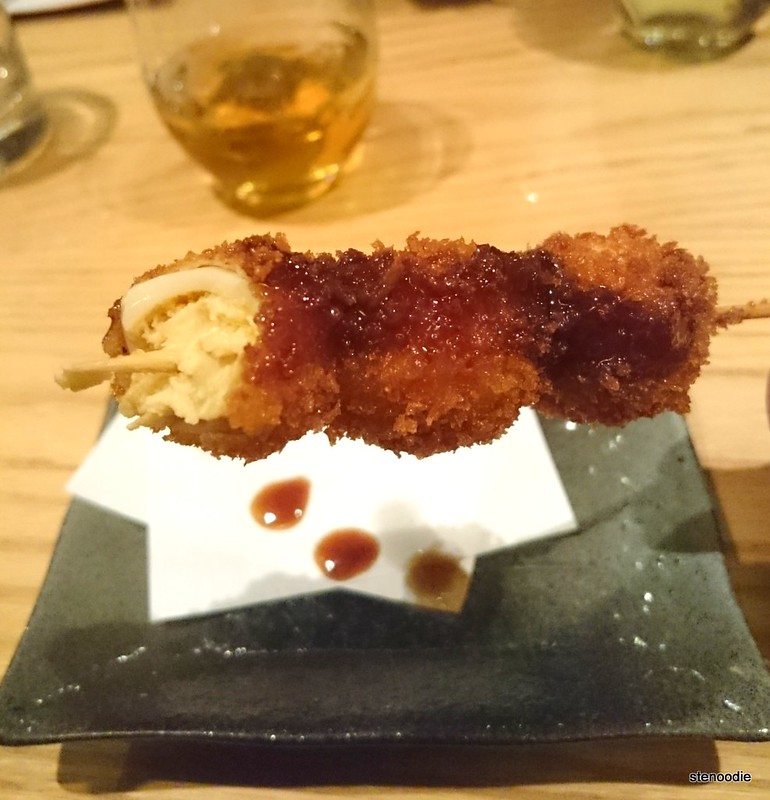 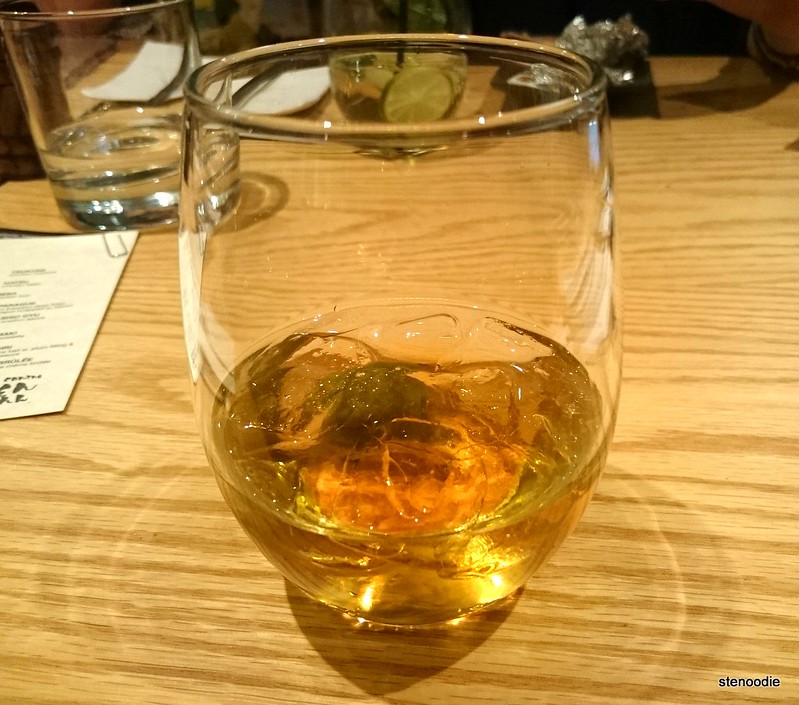 (At this point, we were also served our second drinks of the night on the house — I think because we were running out of time, they served these on the house as well.  I ordered a Choyu Plum Wine.  It was delicious!!  It really had a strong plum flavour to it and it wasn’t watered down at all.) 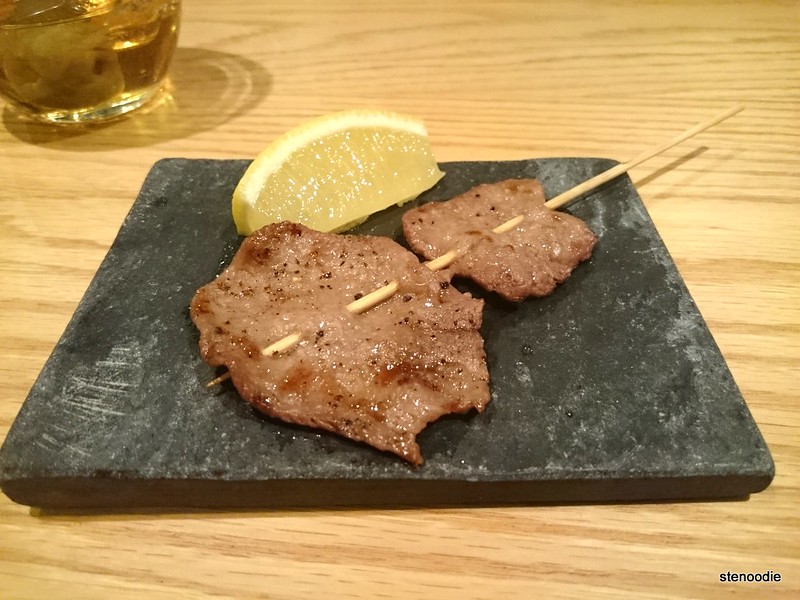 The Premium Gyu-Tongue was a selection that they provided just for this bloggers’s tasting night; they don’t usually serve it on the menu.  This one was absolutely delicious!  That wedge of lemon made all the difference.  The lemon juice really made the thin ox tongue come to life with even more flavour.  I adored how it was so thinly sliced too!  Delish! 😀 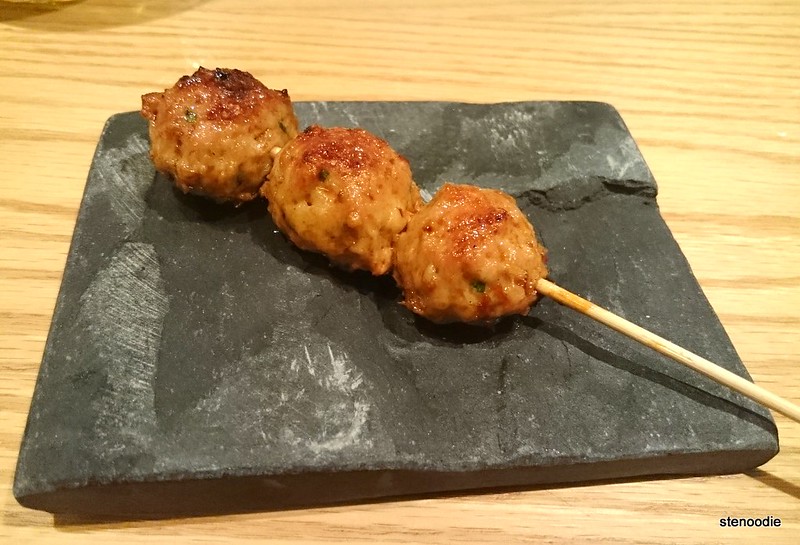 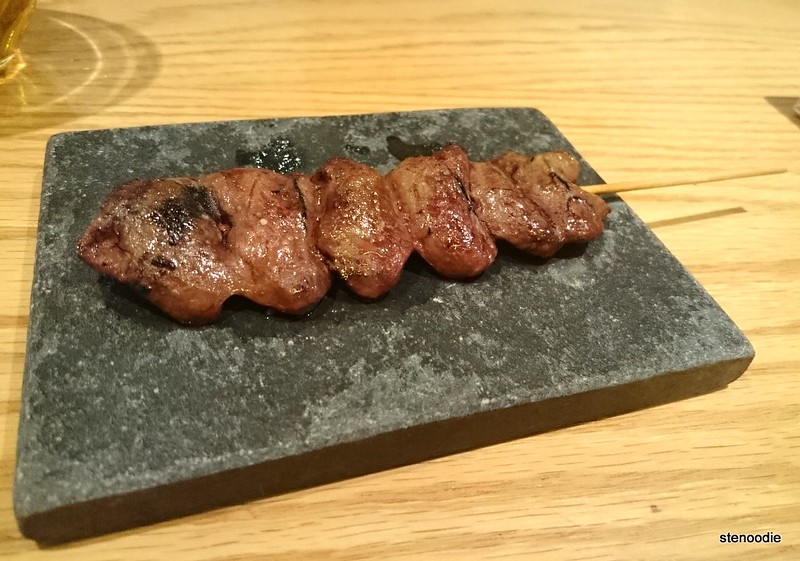 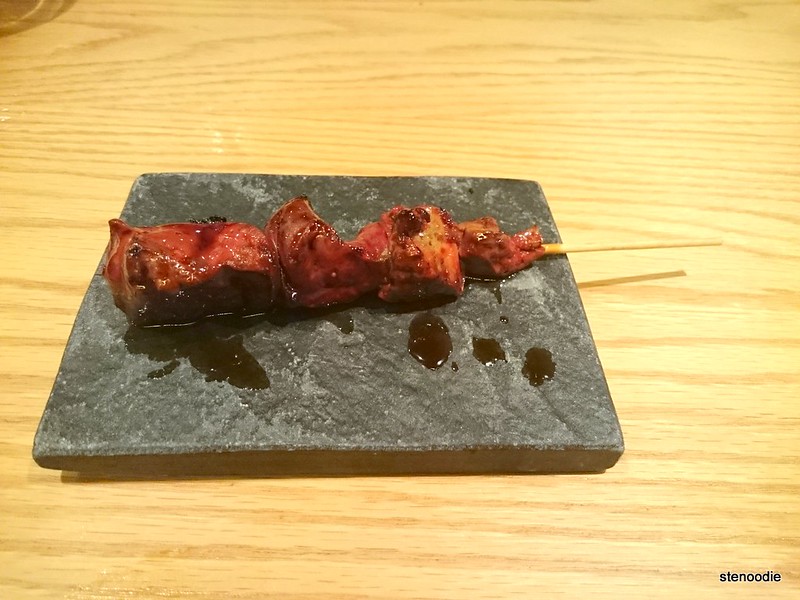 Similarly, the next item, the Reba (chicken liver) was not a favourite among those who did not grew up eating this.  This is definitely normal!  When the chicken liver arrived, its look reminded me of barbecue pork XD.  It was nicely grilled chicken livers with an amazing sauce on top of it.  Again, some of the foodies passed these livers to the ones who enjoyed it instead so as not to waste the food. 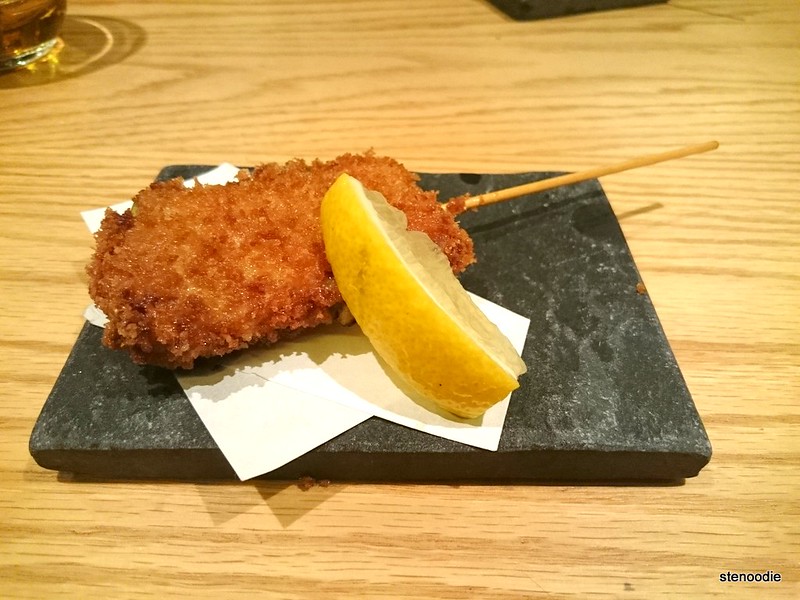 Up next, we had the Panko Breaded Deep-Fried Asparagus Wrapped with Bacon.  Mmm, bacon!  When it arrived with the slice of lemon, you really can’t tell through the panko breading that there are four bacon-wrapped asparagus stalks on the plate.  However, after adding in the lemon juice, this turned out to be such a delicious yakitori!  The crispy bacon wrapped around the juicy asparagus turned out to be such an interesting texture for the mouth.  It was really good and I recommend this if you walk into Kintori Yakitori! 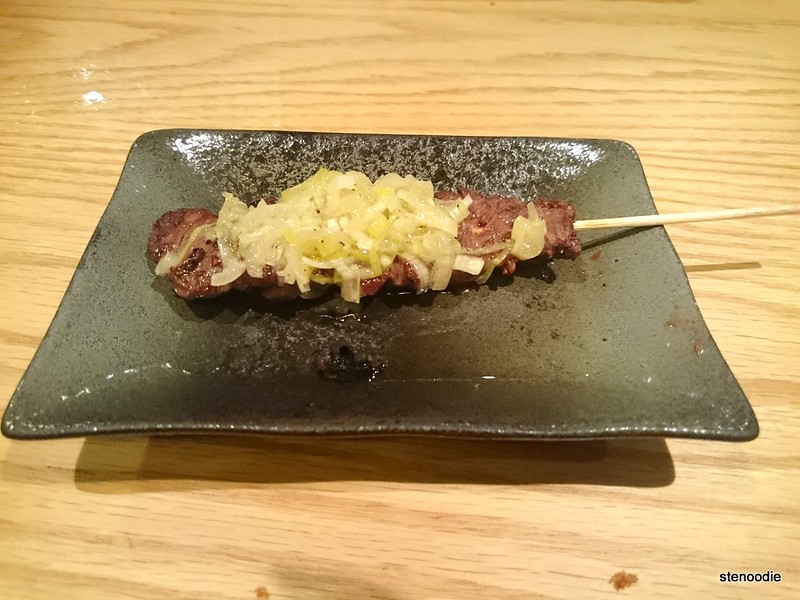 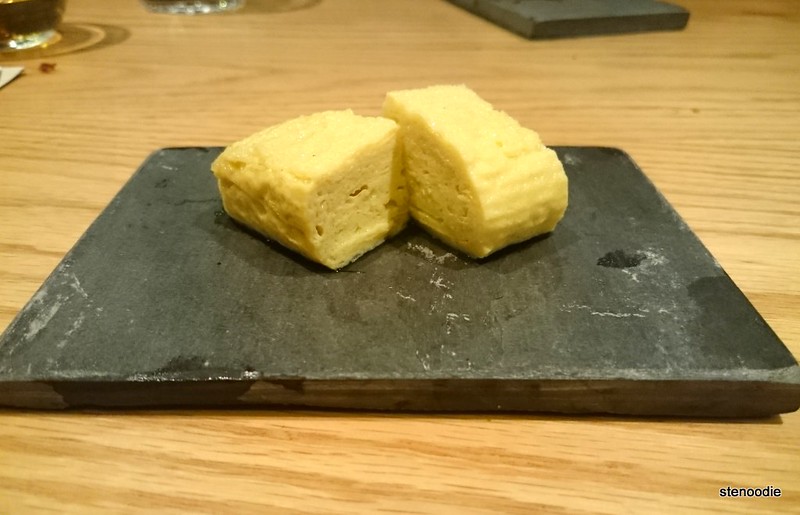 Finally, we rolled into the non-meat courses of the night.  We had the Dashi Maki which was a Japanese omelette.  I was actually looking forward to this one all night because I love omelettes and wanted to see how they made theirs.  To my (little) disappointment, it was actually just a fried egg folded over as an omelette.  I expected stuffing inside the omelette.  XD  My mistake; I shouldn’t have assumed!  Nevertheless, this omelette was delicious because the egg was so soft and cooked perfectly.  Its shape and texture actually reminds me of the one that Miniature Space makes on their channel.  It was yummy!  I wish I had more of this. 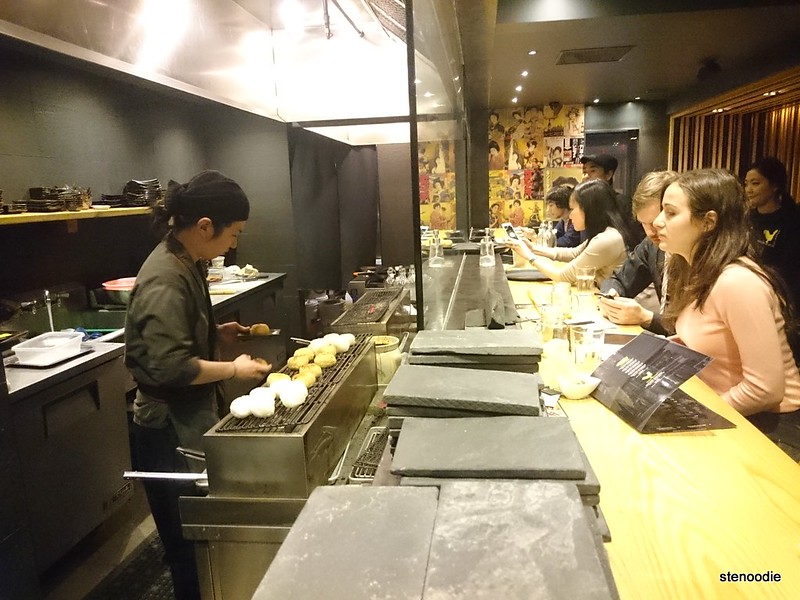 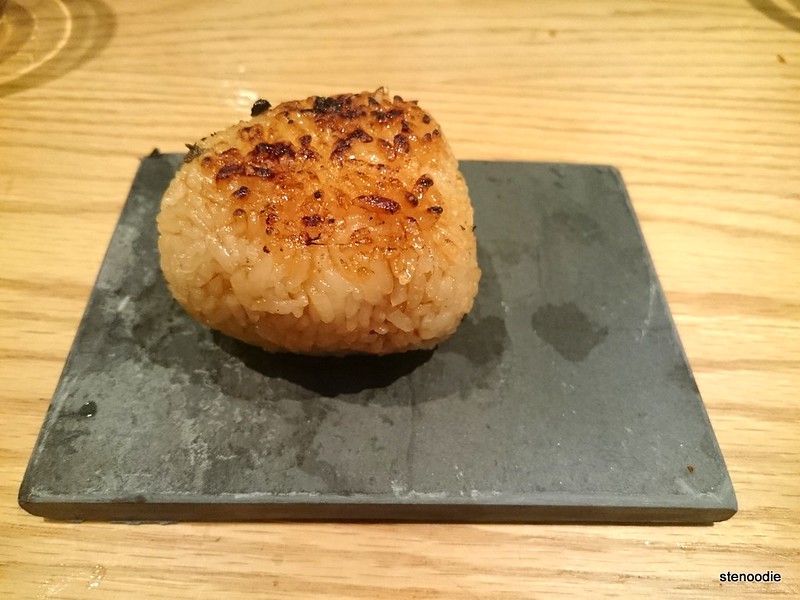 The Yaki Onigiri was a new dish for me.  It was a Char-grilled Rice Ball with Plum Filling and Sweet Teriyaki Sauce.  I observed the chef grilling these big rice balls on the grill and was surprised with how big the rice balls actually were!

They were nicely charred and grilled so that the surface of the rice balls were darkened.  When I pulled apart the rice ball, I could see the plum filling inside.  There wasn’t too much in there but when I ate it, it turned out to be a good amount because it didn’t overpower the entire rice ball.  It was quite an interesting dish that I’ve never had before! 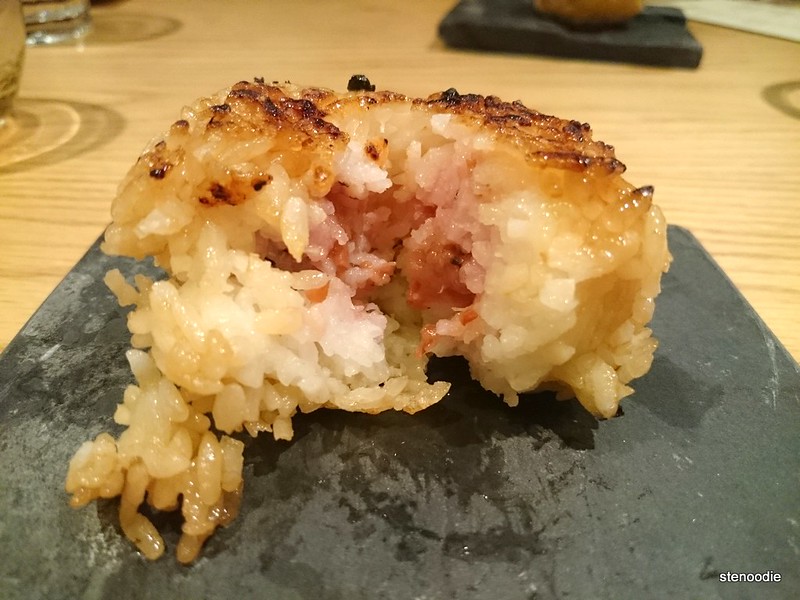 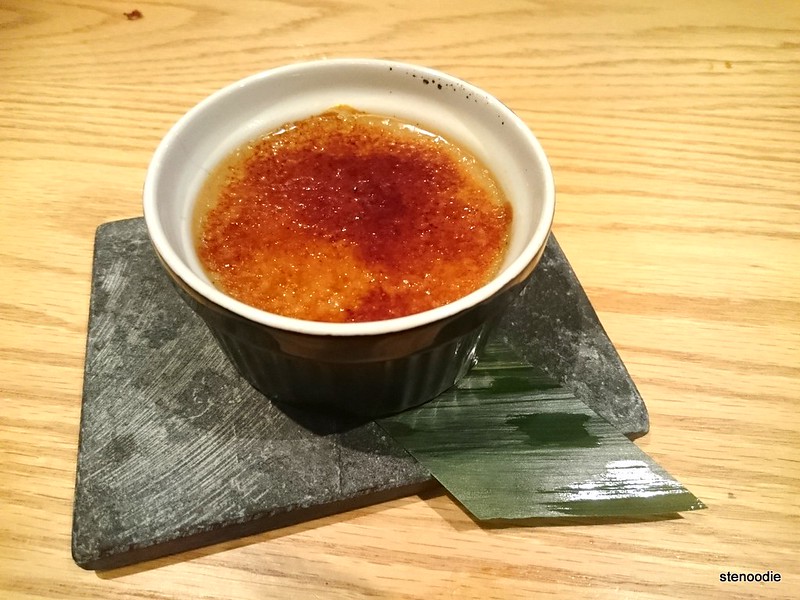 Since we had run late, it was already 9:45 p.m. when we finished eating the dessert and I left quickly as I had some prior commitments that night.  It was such a pleasure to meet and see new and old foodie friends on this night.  I thank you Stella and the Kinka Family again for the invite.  I hope, with their blessing, that I will continue to have more invitations to their tasting events! 🙂

You can go to Kintori Yakitori to order the items that I mentioned in this post and try it for yourself!  Happy yakitori-ing! 😛 🙂

FTC Disclaimer:  Although Kintori Yakitori reached out and invited me to a complimentary tasting at their restaurant, the opinions expressed here represent my own and not those of the restaurant.