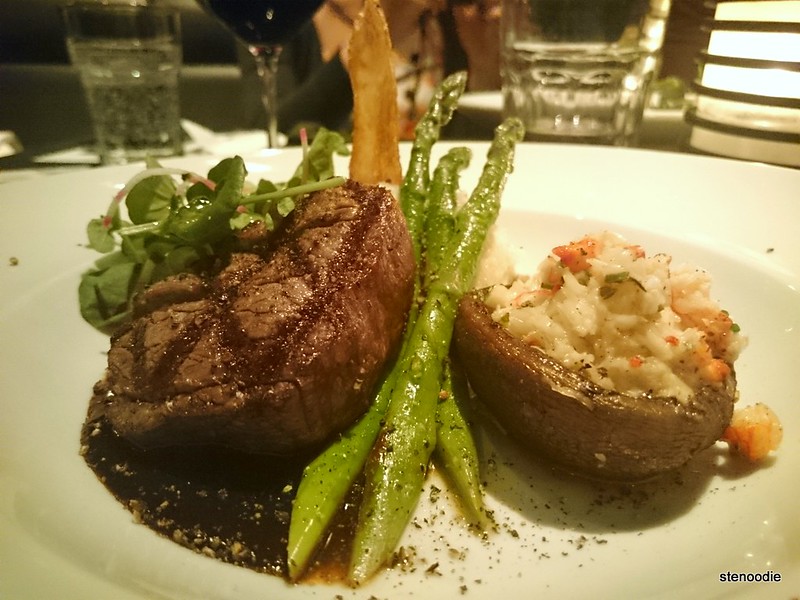 What a pleasure it was to dine among the great food bloggers of Toronto this past Tuesday evening!  Victoria, the Marketing Manager of Canyon Creek, contacted me at the end of January to invite me to their exclusive blogger event called “The Chef’s Table”.  It’s an event that is usually run for their Canyon Club members, a personalized loyalty program.  This particular event “The Chef’s Table” featured a six-course menu complete with wine pairings, presented by Executive Chef Dorian King.  They typically only open these events to Canyon Club members but were holding this one-night only for local bloggers and influencers in the Toronto area to see what being a Canyon Club member is all about. 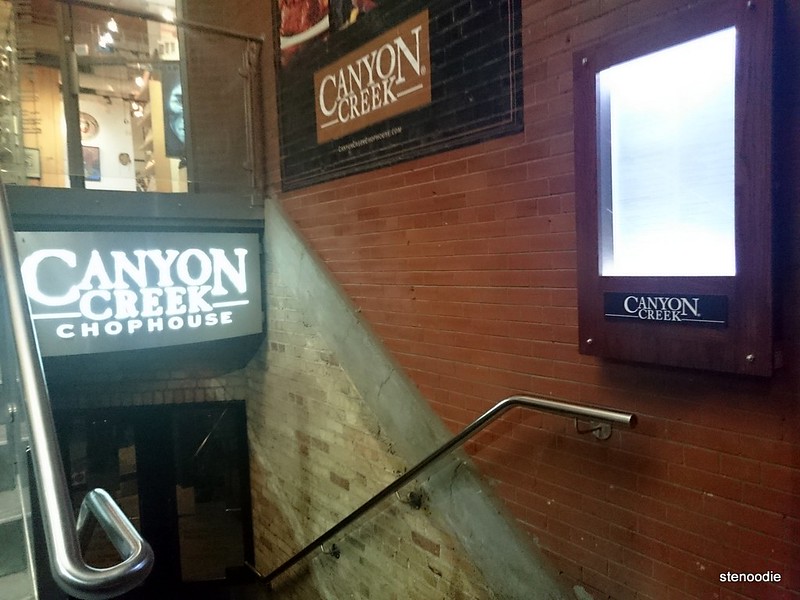 I gladly accepted the invitation and was super excited for the evening! 🙂

The formal invitation outlined briefly what the six menu items were for the evening and informed us to arrive at 7:30 p.m. sharp in order to enjoy the full experience.

I was early to arrive at the Front Street location of Canyon Creek.  The last time I had been to a Canyon Creek was several years ago when I was celebrating Valentine’s Day with my girlfriends.  Canyon Creek is typically known for their delicious steaks, but after this night at The Chef’s Table, my experience completely overhauled what I thought about Canyon Creek as being an only “steakhouse” restaurant.

I bumped into Jen of @Gastroworld as I arrived at the restaurant as she was early too!  The hostess informed us that we could wait at the bar area and have a drink before we officially started at 7:30 p.m. promptly.  I met some of the other food bloggers and influencers.  It’s always so great to put a face to the names of the social media accounts! 🙂 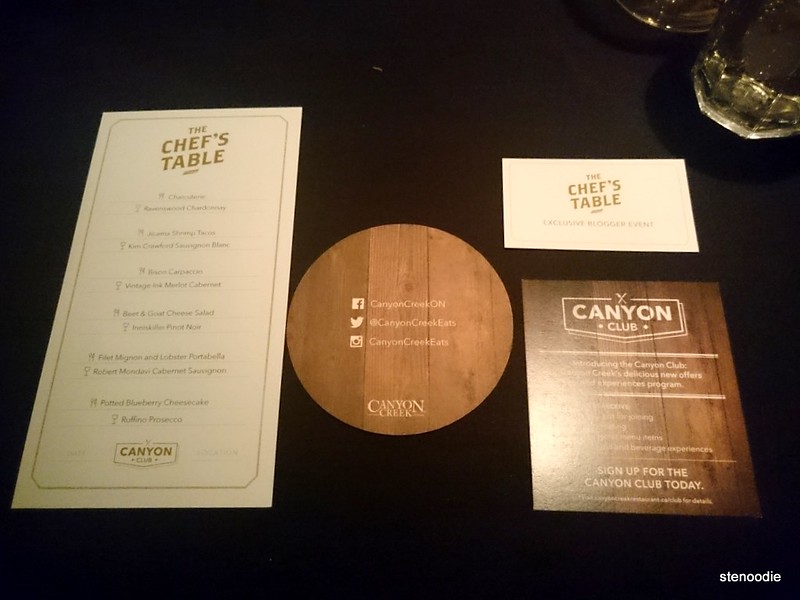 The set up for The Chef’s Table Exclusive Blogger Event! 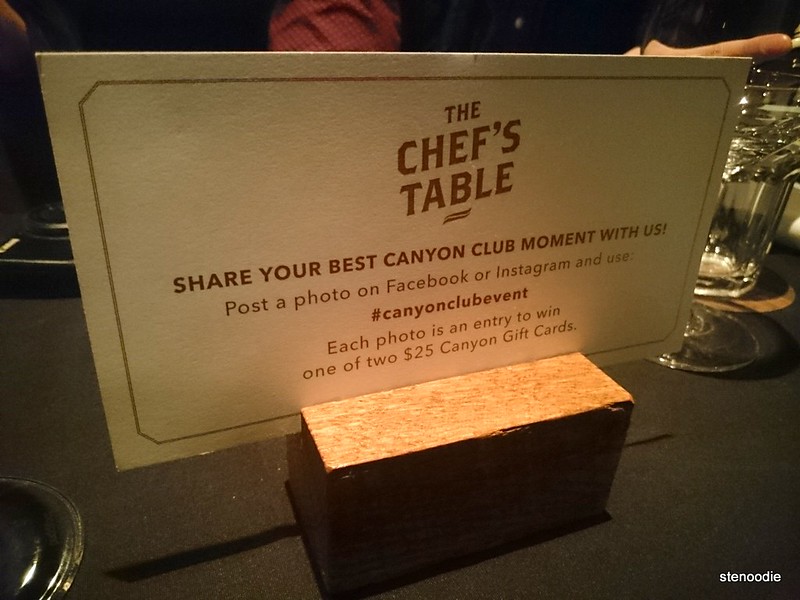 Rey won this challenge by the end of the night — honestly I didn’t feel comfortable being on my phone all night posting on social media to partake in this much..

It was definitely a small and intimate dinner as advertised in the e-mail invitation.  There were a total of eight of us that night.  I had a pleasure of sitting with Alice of @meetandeats, Rey of @eatnmingle, and Brad, one of the staff at Canyon Club.  It was a lovely evening and we got to meet many of the special hosts and hostesses that organized the event including Victoria herself.

Our six-course dinner started promptly and after every course, we were given a thorough explanation and run-down of the ingredients used in the course by Executive Chef Dorian King himself as well as the wine in the wine pairing.  It was a tremendously well-planned event and highly special!  We were given top treatment and dined like kings and queens. 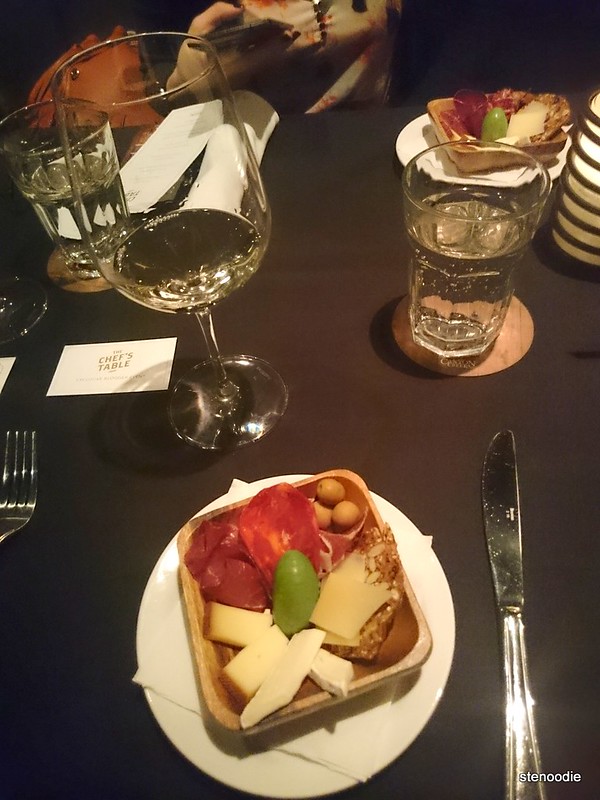 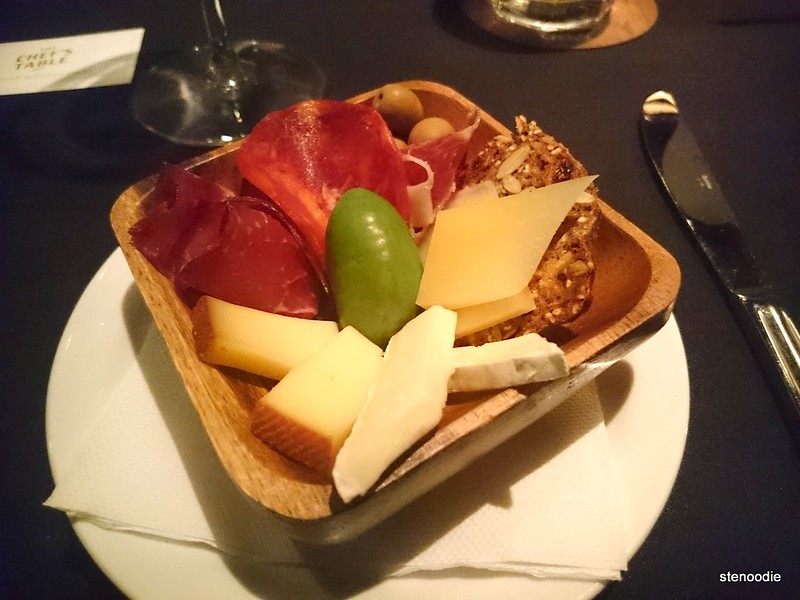 Love this presentation! Loved the cured meats and sheep’s  milk!

I really enjoyed this!  I love charcuteries and this one was definitely fresh and well-picked.  The Jamón Ibérico was perfectly thinly sliced with the perfect touch of seasoning.  I adored the big green olive in the middle of the selection as it was so juicy and fatty.  It was delicious!

The Ravenswood Chardonnay was a good pick as it was light and went well with the saltier tastes of the Charcuterie. 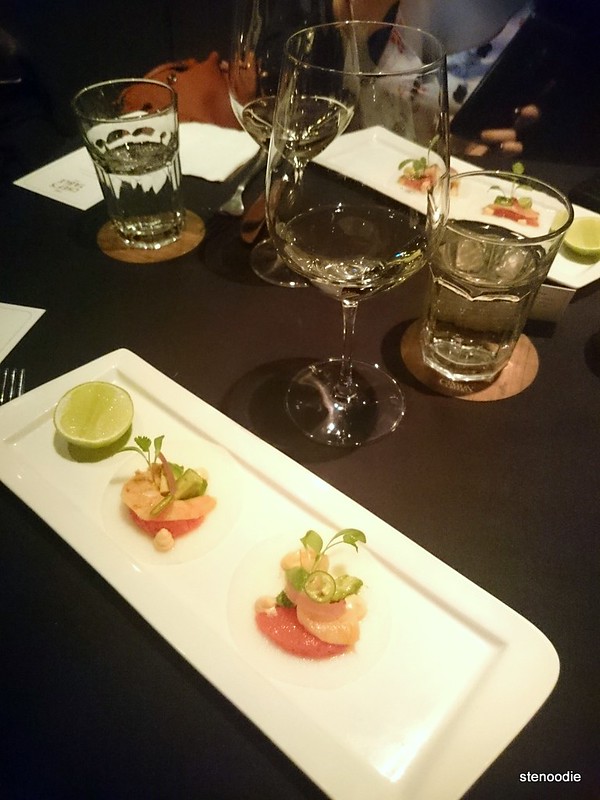 The second course was Jicama Shrimp Tacos paired with a Kim Crawford Sauvignon Blanc.  Everyone loved this course!  There were two tacos on the plate which were each loaded up with a red grapefruit, avocado, butterflied tiger shrimp drizzled with smoked paprika extra virgin olive oil, pickled red onion, serrano chili, and coriander cress all on top of a thinly sliced jicama shell with dots of sriracha crema surrounding the creation and served with a juicy lime.

This was an explosion of flavour — crispy, crunchy, juicy, sweet, spicy… almost anything that you could name; this had it all!  This was so unique and many commented that they could down a lot more at a time since it was so light in flavour.  This was an item that they don’t usually have on their regular menu. 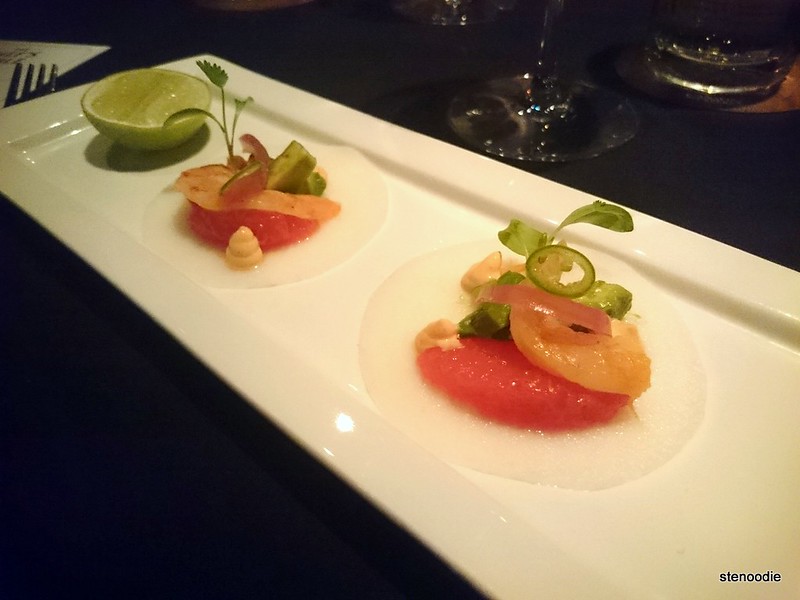 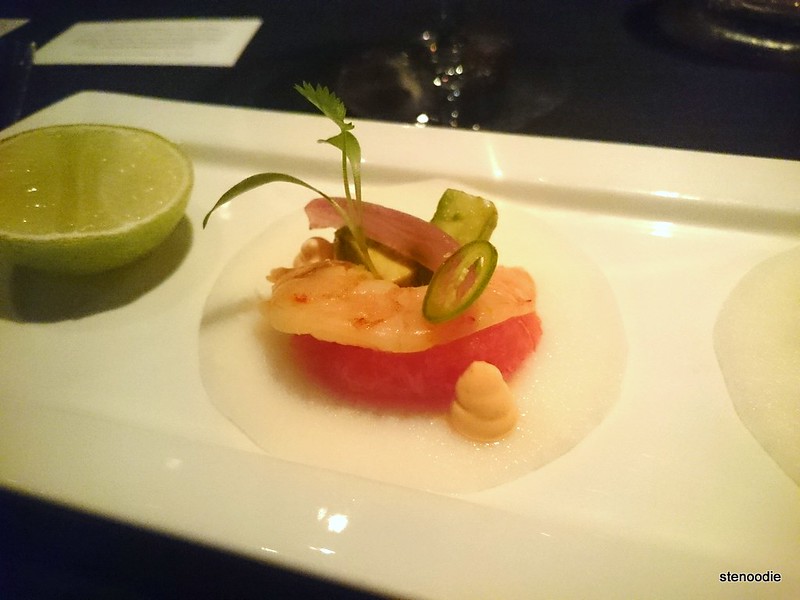 Look at that little sriracha crema 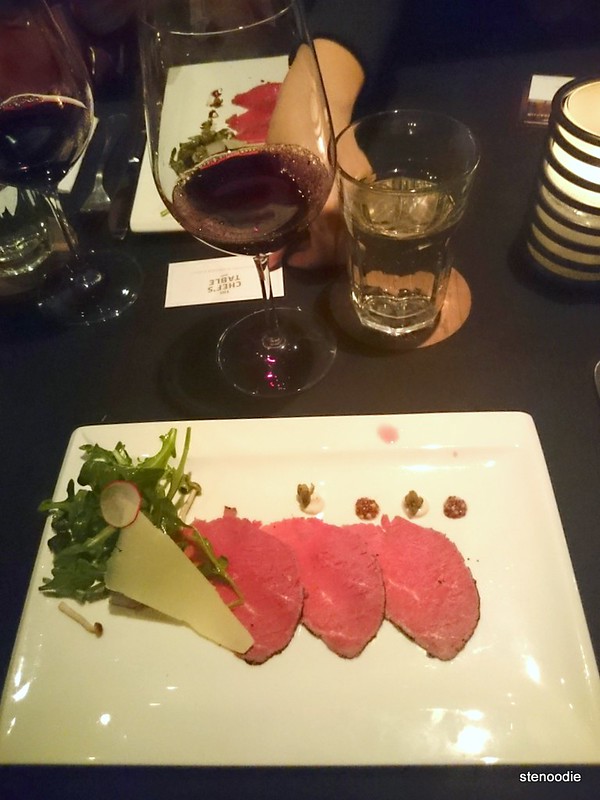 The Bison Carpaccio arrived with an argula salad and paired with a Vintage Ink Merlot Cabernet.  It was a Canadian Rangeland Bison and farmed in Lacombe, Alberta, lightly seared, and raised without antibiotics, hormones, or growth promotants, and seasoned with Maldon Salt and cracked pepper. 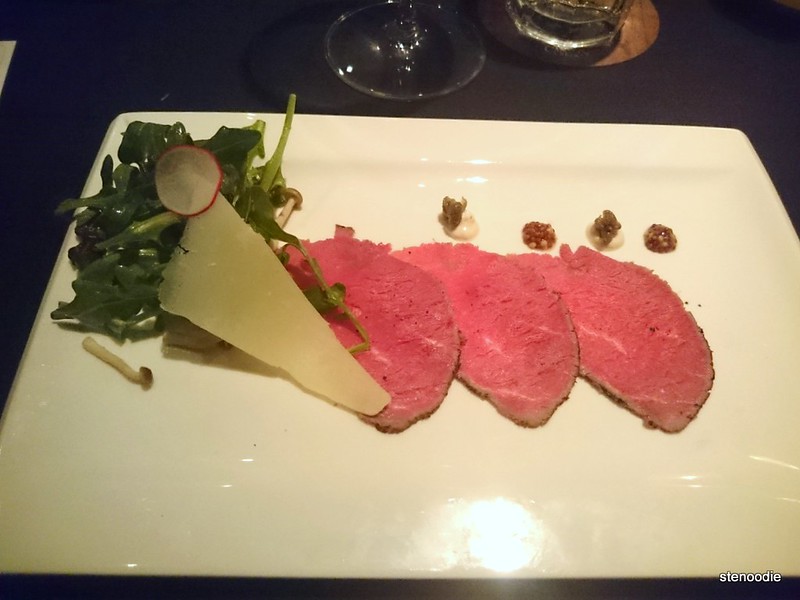 The triple crunch mustard was delish!

I really enjoyed the triple crunch mustard that was very unique as well as the fried capers on the argula salad.  I love carpaccio in general and I found that this one had a softer texture than I am usually used to.  It was great nonetheless!  The melot complimented this dish well! 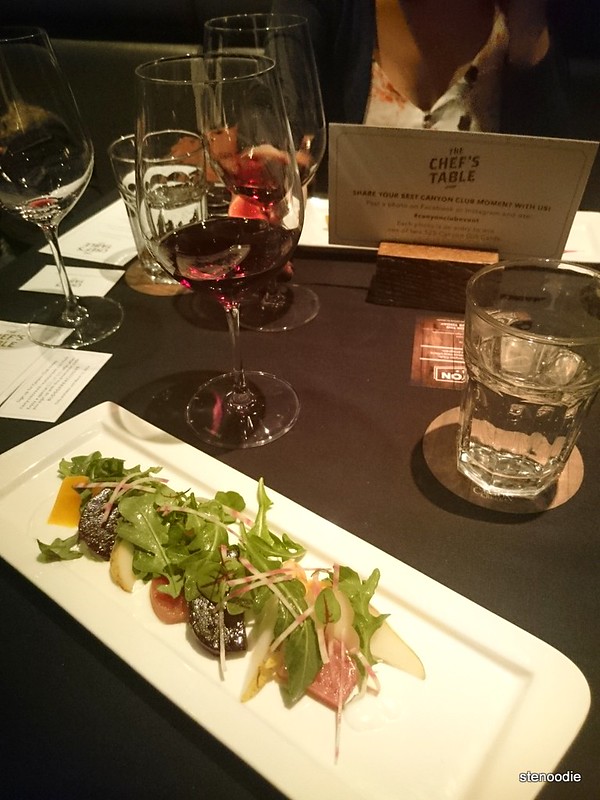 The fourth course was a Beet & Goat Cheese Salad paired with a Inniskillin Pinot Noir.  You would think that a simple salad like this would be nothing too spectacular but this one was absolutely over-the-top delicious!  There was a honey goat cheese coulis spread across the plate with the arugula salad built on top of it of red, golden & candy cane beets, Anjou pear, with lemon vinaigrette and Grana Padano parmesan, raw julienned candy cane beets, and sorrel cress arranged strategically in a row.

It was a beautiful salad and plated with perfection!  The julienned candy cane beets definitely added some nice colour differentiation to the salad.  What made this salad so delicious were the juicy and sweet pears and the honey goat cheese coulis.  I loved it! 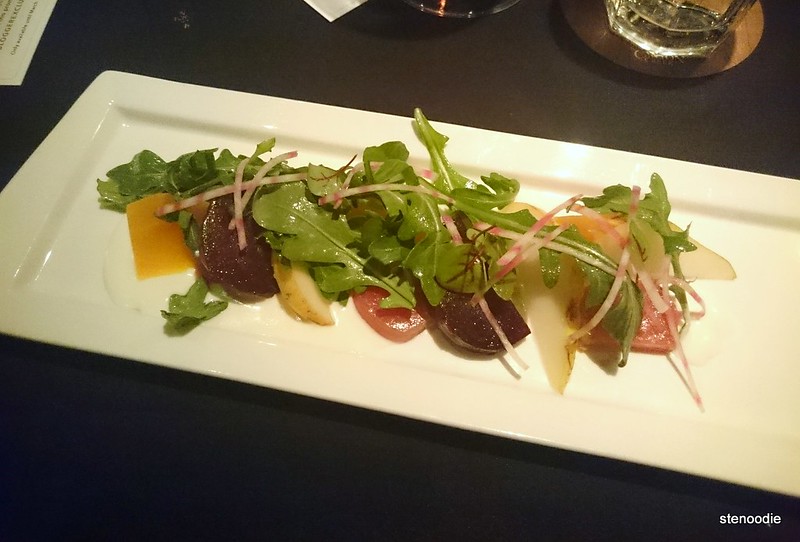 This salad is deceiving because it is so delicious!! 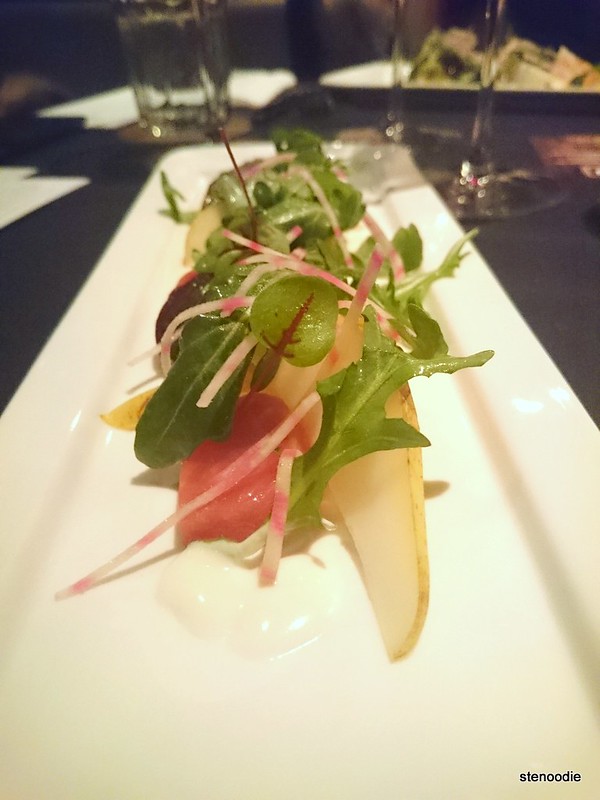 A creation of beauty 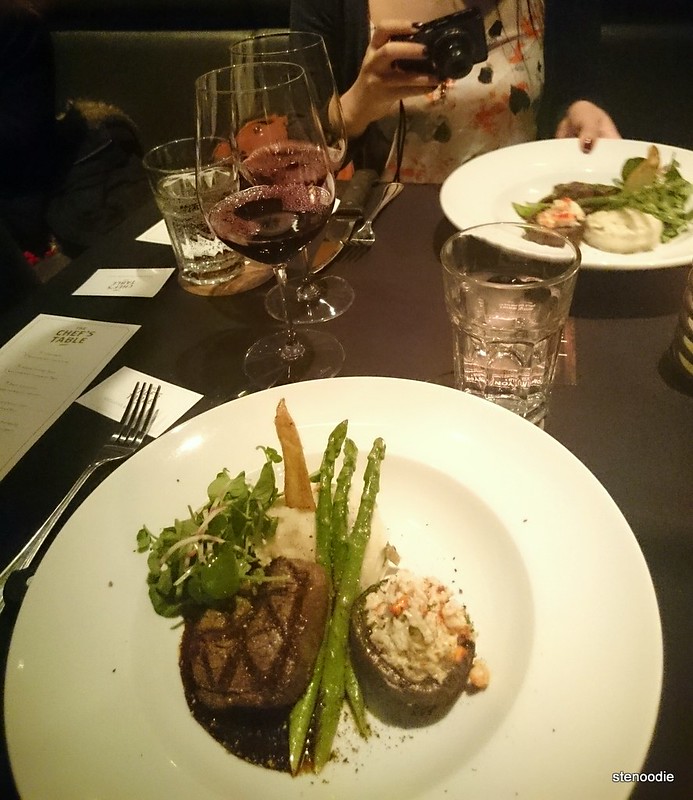 The fifth course was one that we were all looking forward to.  This was the Filet Mignon and Lobster Portabella paired with a Robert Mondavi Cabernet Sauvignon.  Canyon Creek is well known for their tasty and juicy steaks, but by the time we got to this course, we also knew that their appetizers and starters were mighty satisfying and delicious as well!  (There is a similar version of this dish served at the Canyon Creek Sherway location only, as well as REDS Wine Tavern [which I’ve been to!] & REDS Midtown Tavern.) 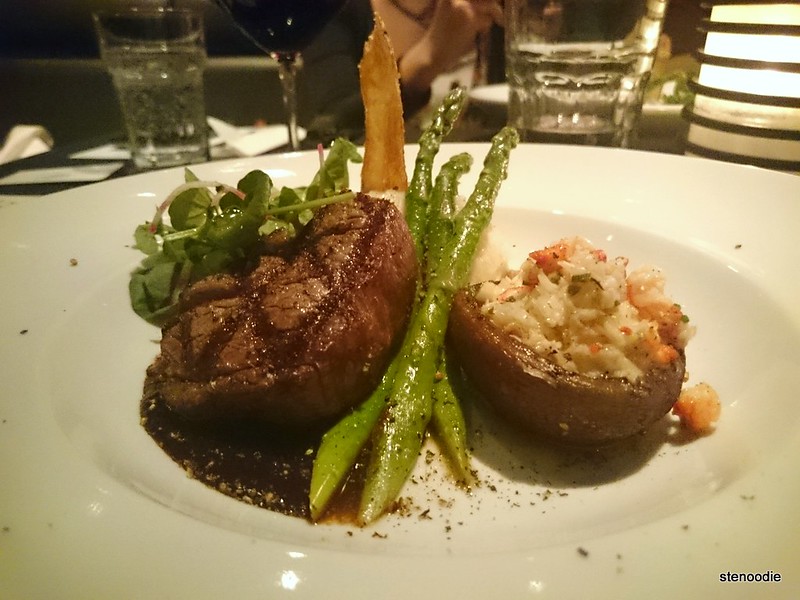 This steak was the perfect size for me

The tenderloin filet was a precious morsel of tender and juicy meat that I thought was in between medium rare and well done.  It was very well grilled and I liked how juicy it was!  The Atlantic lobster stuffed jumbo Ontario cremini mushroom was also extremely tasty.  I especially loved the mushroom and how it was big and fluffy with the lobster bits served on top of it.  The cabernet veal jus was flavourful and strong.  It was great!  There was also a fitting russet mash, asparagus, watercress, and a candy stripe beet garnish with a crunchy fingerling potato chip. 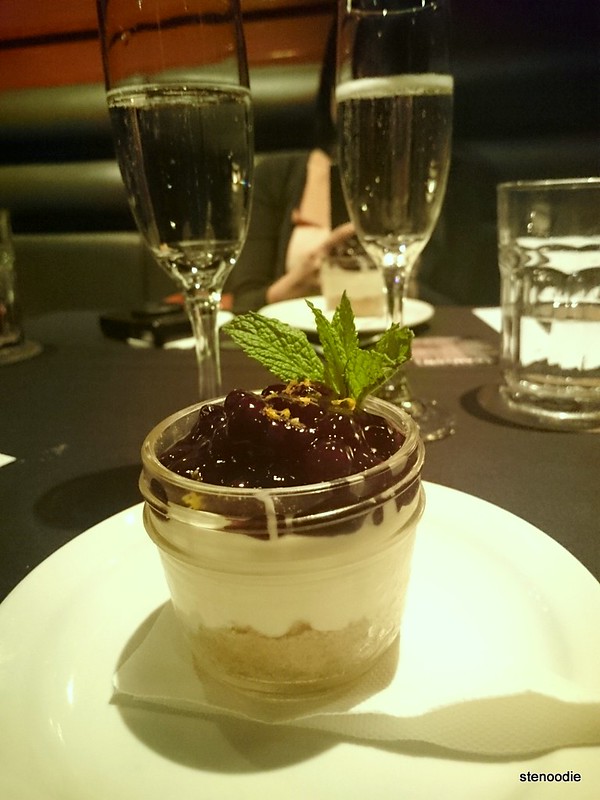 Last but not least, we finished off with the dessert: a Potted Blueberry Cheesecake (layered blueberry no-bake cheesecake with honey graham crust and orange zest).  It was very cute and assembled in a mason jar with a mint sprig to fit with the “potted” idea.

I loved this dessert!  It was filled with a creamy and rich cheesecake with a graham crust at the bottom.  The blueberry compote was sweet and juicy and fresh.  I gobbled this one up so quickly! 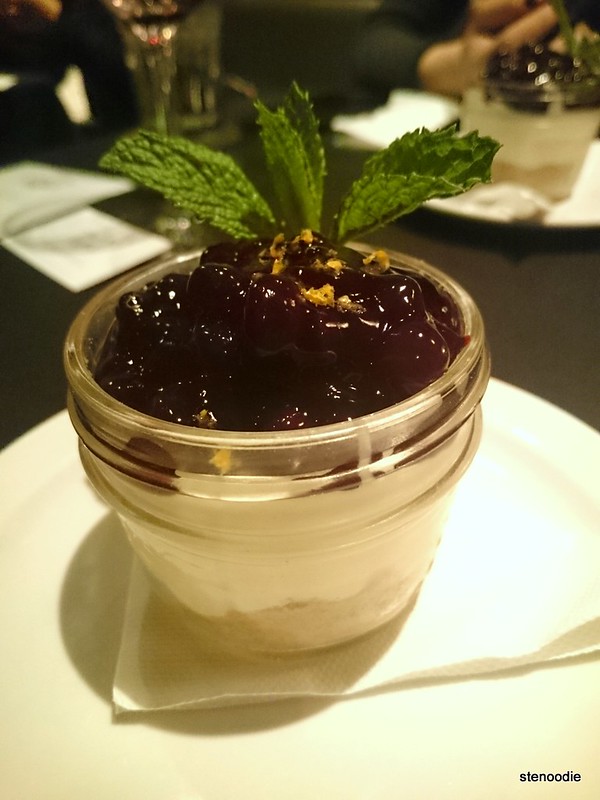 I devoured this in seconds..

The Ruffino Prosecco was bubbly and went well with this dessert.  I was so full by this point that I couldn’t finish the drink, however! XD 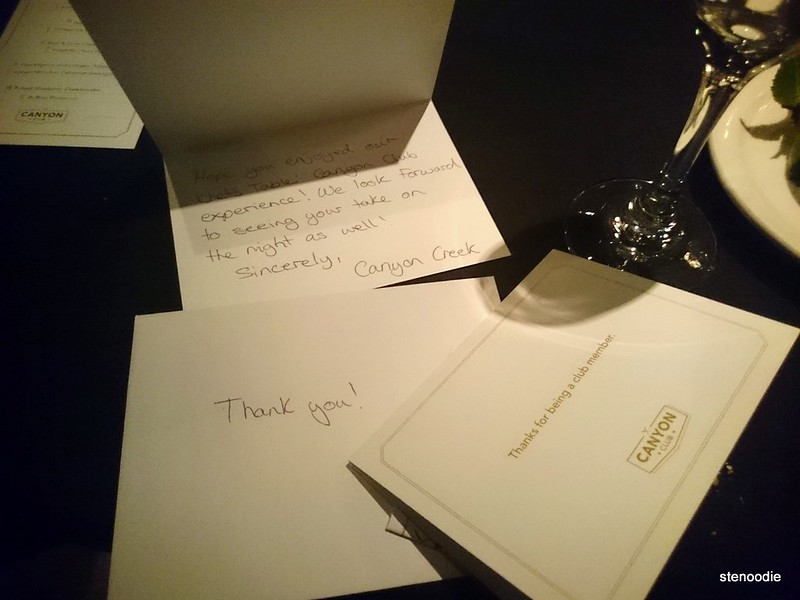 Thank you for the handwritten thank-you cards! = )

Our exclusive blogger event took us until a little after 10 p.m. at which time we said our good-byes and gave thanks to the organizers for such a great night of dining.  Thank you again to Victoria and the organizers, chefs, and servers at Canyon Creek for providing an marvelous night of dining and trying out what it was like to be a Canyon Club member!

If you are interested in signing up as a Canyon Club member, you may visit canyoncreekrestaurant.ca/club and enjoy a special $20 off $40 offer when you sign up with this exclusive promotion code: BLOGGEREXCLUSIVE, only available until March 15, 2016.

Cheers, and thank you for reading! 🙂 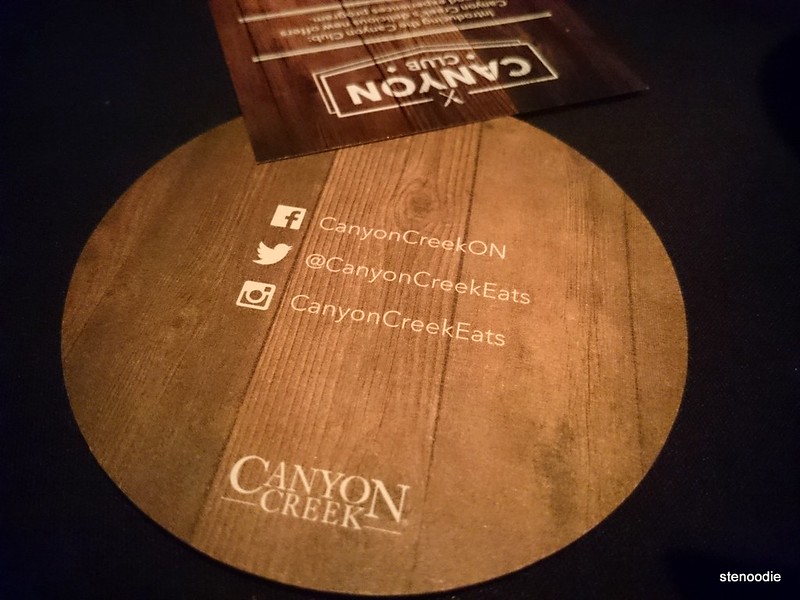 Also, please give a round of applause to Executive Chef Dorian King for not only a delicious night of glorious food but for graciously providing me with a very thorough description and ingredient list of each course used on this night.  I appreciate it so much as a blogger! 🙂

FTC Disclaimer:  Although Canyon Creek reached out and invited me to a complimentary tasting to review and promote their restaurant, the opinions expressed here represent my own and not those of the restaurant.