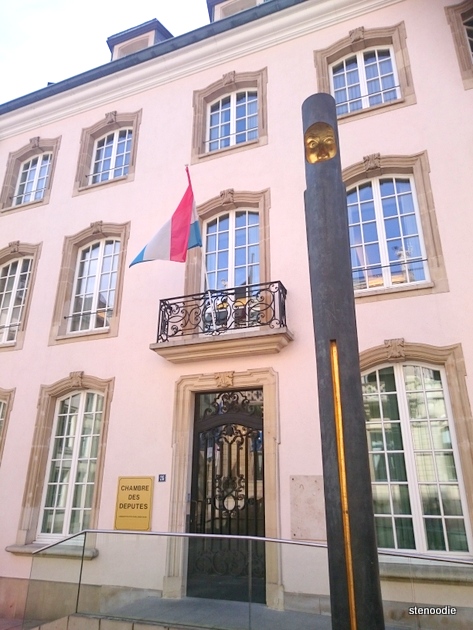 Two weeks ago, I posted about the guard standing in front of the Chamber of Deputies and marching about in the city of Luxembourg in Luxembourg.  It just so happened that in the space between the two government buildings, there stands several poles that have faces on the top of them!  The story goes that if you walk in a straight line down in between the two buildings and look at the faces on top of the poles, their eyes will follow you as you keep walking.

There was a full line of these poles with faces on them but this picture only shows one face.  It was actually quite fascinating to try this out and I found that each of the faces did indeed keep eye contact with me as I walked from one pole to the next.  How fun and cool — especially for a tourist like me! 🙂

You can see a bit of the faces on the poles in this video I took:

I'm a stenographer, foodie, avid traveller, and new mom who loves to share her experiences with the world.
View all posts by stenoodie →
This entry was posted in Weekly Photo Challenge and tagged Chamber of Deputies, Face on a pole that follows you as you walk, faces on a pole that keep eye contact with you, Luxembourg, postaday, things to do in Luxembourg, weekly photo challenge. Bookmark the permalink.