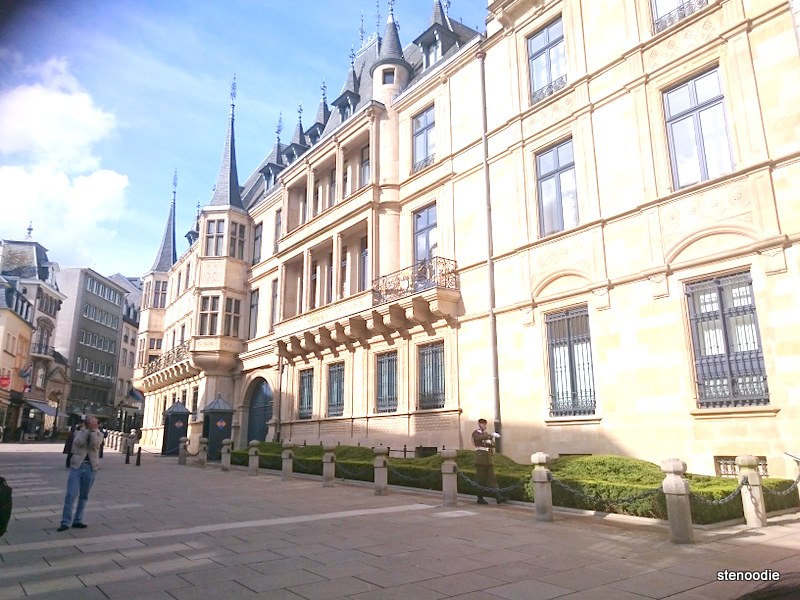 Any time that I’m travelling and get to watch a changing of the guards, the guards themselves as well as the process are all quite fascinating and worth pictures (and even videos).  On our trip to Luxembourg earlier this month, we were present at the Chambre des Députés (Chamber of Deputies), also known as “Krautmaart”, the unicameral national legislature of Luxembourg.

In front of this parliamentary building, there was a single guard standing and marching about.  He was striding to and from his post and stomping his foot enthusiastically each way (see him in the photo?).  When it came time for him to stand in front of his post, he was standing still and devoid of any facial expressions.

I think there’s a lot of admiration for these guards because they do a fairly tough job (at least I think it is).  They have to stand on guard for a good chunk of the day without moving, sneezing, talking, or behaving out of “character”.  I really don’t think it’s that easy to do!  That’s why every time tourists and visitors see them, the cameras and video recorders come up to capture these moments.  These are real living humans on display.  If that’s not tough, I don’t know what is.  Nevermind that there will always be some people that like to annoy or make them laugh in order to get a reaction out of them (perhaps). 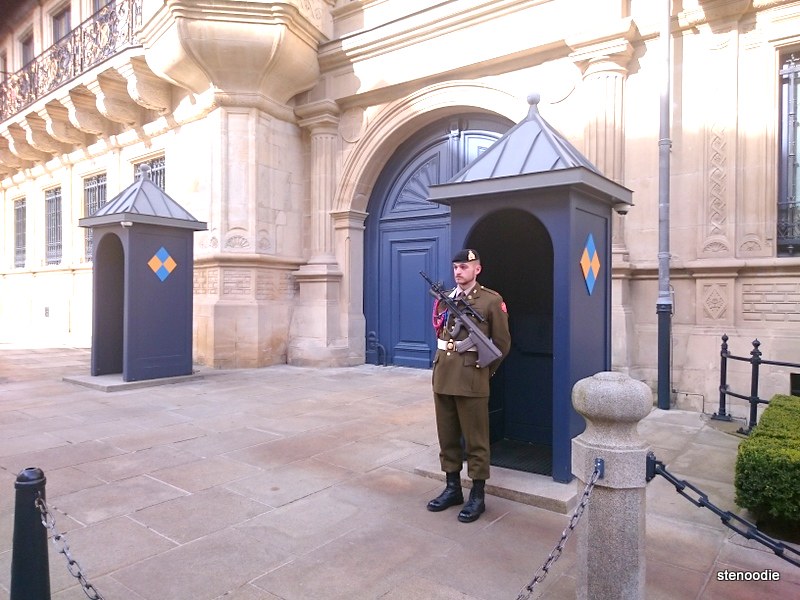 I also remember my visit to Taiwan where we saw the changing of the guards there and how strict and formal the procedure was.  There were also another set of guards that stood so still guarding at the front of an entrance that they barely even blinked (very tough and strict rules in those Asian countries sometimes)!  It certainly elicits a lot of admiration, a job that I would never want to do or plan to even try.

You can see in the video below a glimpse of the guard marching:

I'm a stenographer, foodie, avid traveller, and new mom who loves to share her experiences with the world.
View all posts by stenoodie →
This entry was posted in Weekly Photo Challenge and tagged Chamber of Deputies, Chamber of Deputies in Luxembourg, changing of the guards, guard standing at a post, guard standing still, guard that stays still, guards that don't move or talk, Krautmaart, Luxembourg, Luxembourg City, postaday, weekly photo challenge. Bookmark the permalink.