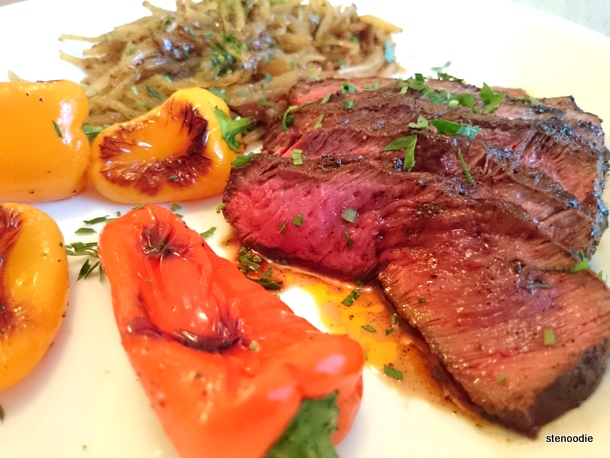 Chef’s Plate has done it again, delivering utterly fresh and local ingredients and a simple yet tasty recipe for an amazing dinner at home.  Chef’s Plate is a food program where you select the meals you want to make at home and they send you the fresh ingredients that are pre-packaged with a recipe created from a chef for a set fee.  I’ve been cooking using Chef’s Plate since August of last year and I love every package that I receive and cook at home.  Their service and fresh ingredients are simply unbeatable!

For this latest shipment (I believe it was my 11th meal from Chef’s Plate), an Espresso Rubbed Steak with Crispy Shredded Put tatoes and Baby Bell Peppers was on the menu.  We’ve cooked steak several times now from Chef’s Plate and were well familiar with the locally sourced flat iron steak. 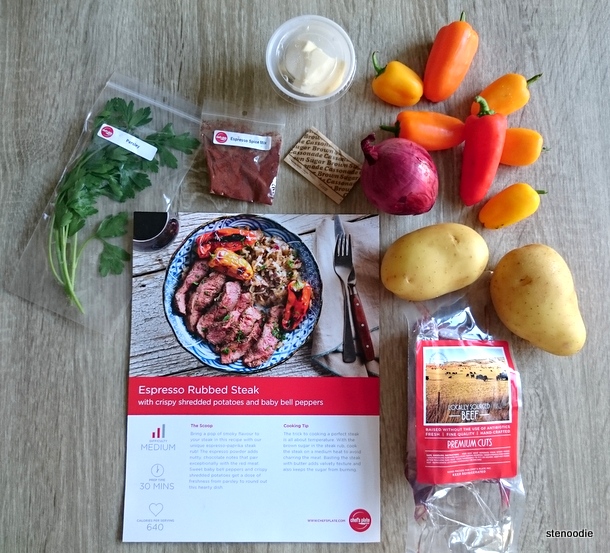 The fresh ingredients and recipe card that arrived in the box

This recipe called for 30 minutes of prep time and had a difficulty level of Medium. 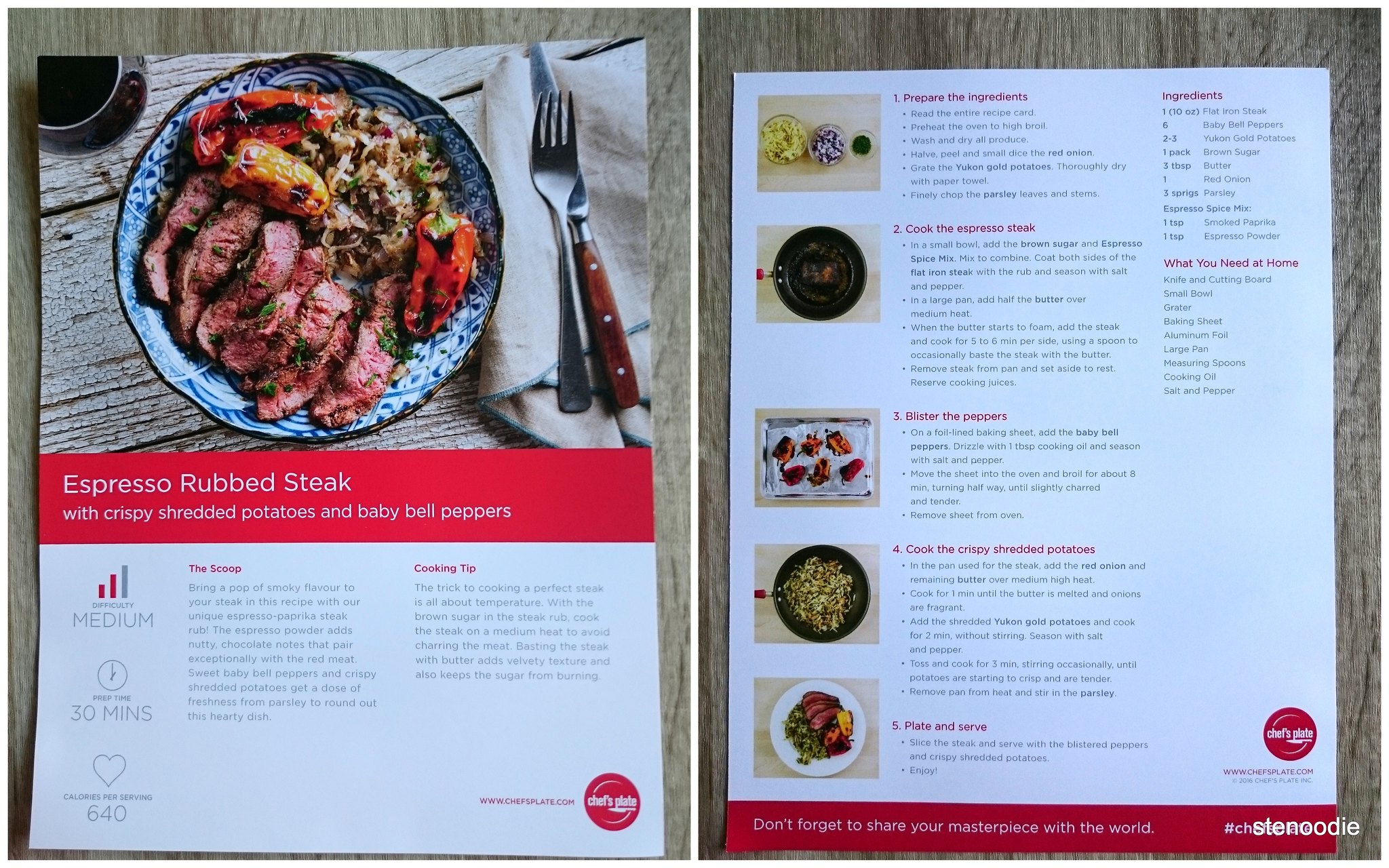 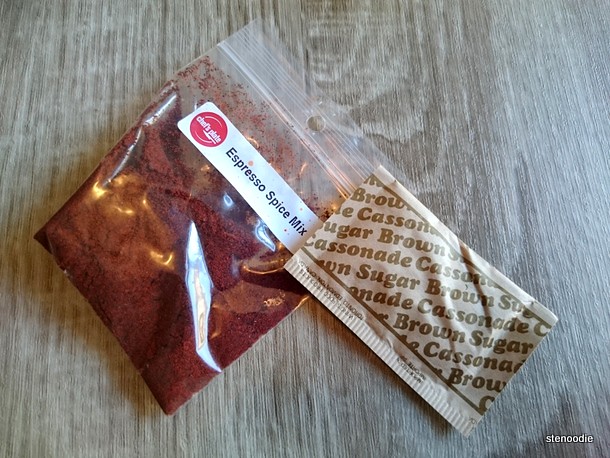 First of all, the meat is always marinated first in whatever recipe I follow.  This is to ensure that the meat has had maximum marination time in order for the marinate to soak in as much as possible for a better tasting meal.  For this marination, a blend of brown sugar and Espresso Spice Mix (containing smoked paprika and espresso powder) was rubbed into the piece of thick steak, followed by a dusting of salt and pepper. 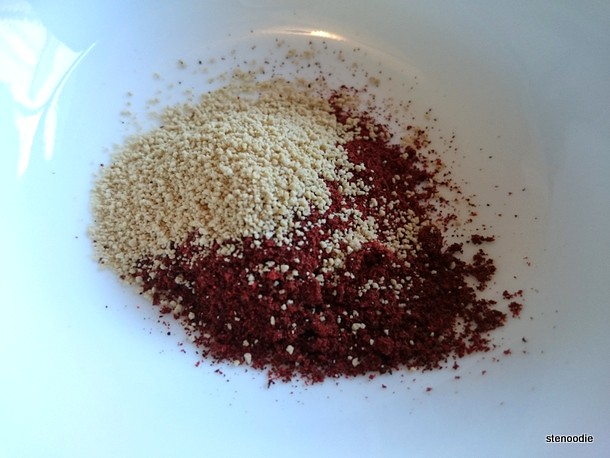 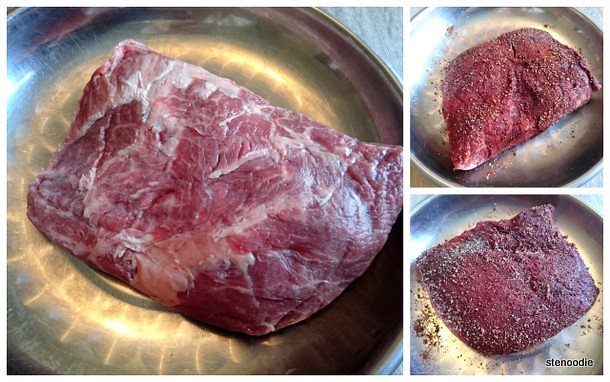 Marinating the steak with the brown sugar, Espresso Spice Mix, and then seasoning with salt and pepper

After this was done, the steak was left aside to soak in the marination and off we went to wash, dry, and chop up all the produce.  All of the produce were incredibly fresh, not only by looks, but afterwards when we were eating it too.  Nothing was bruised or off about any of the produce. 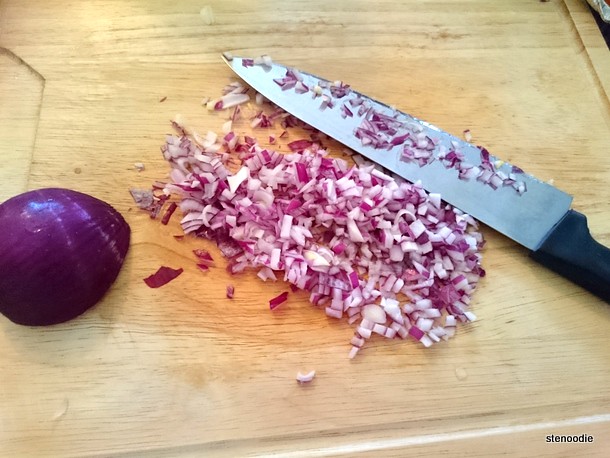 Halving, peeling, and small dicing up the red onion 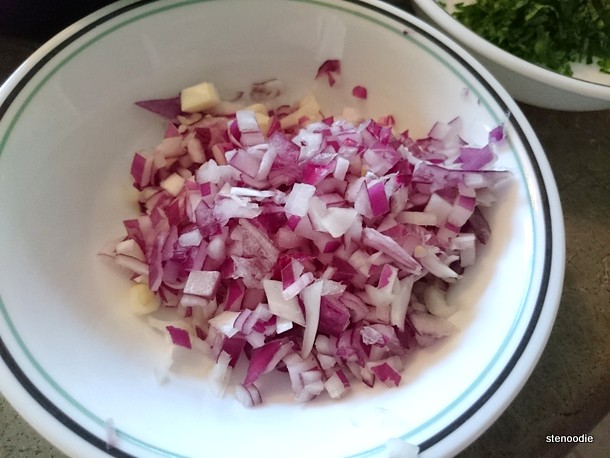 Small dice of the red onion 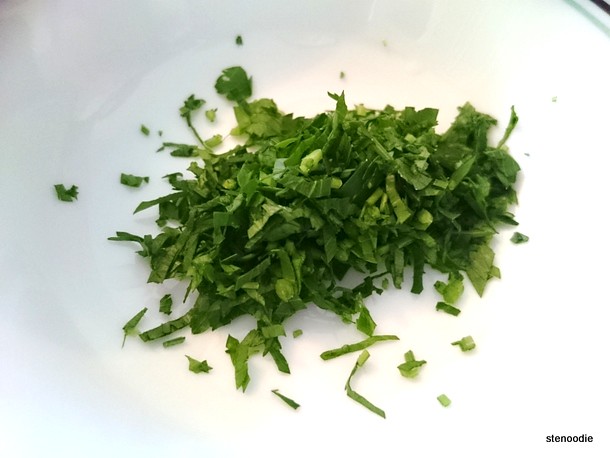 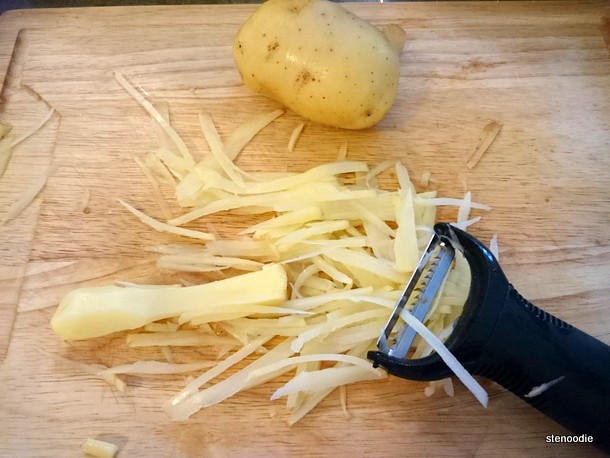 Grating the Yukon gold potatoes and then drying with paper towels 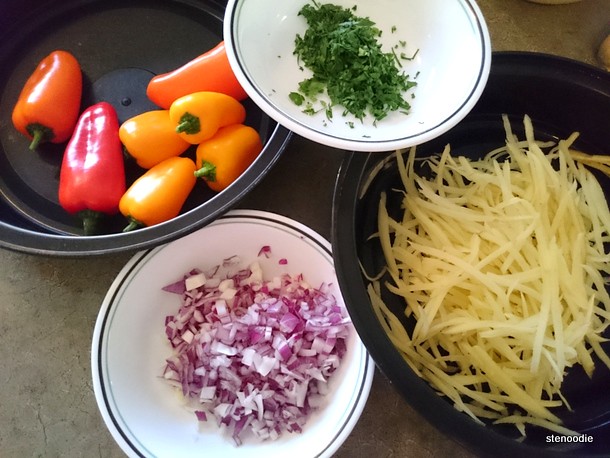 The espresso steak was cooked in a foamy butter on medium heat.  The steak was fairly thick this time so we did cook it longer than usual (but still only enough to ensure a medium rare steak). 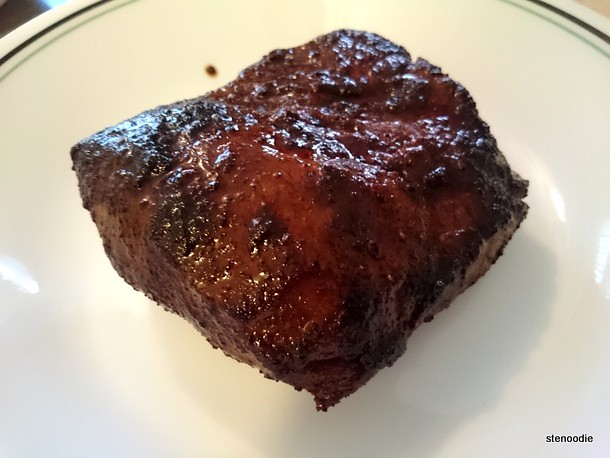 Ta-da! About 4 minutes on each side 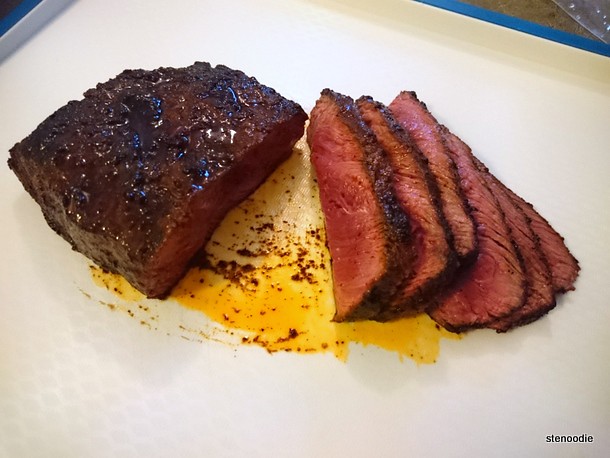 Look at that juice

After that, we took the rest of the butter and red onions to cook in the pan sauces.  Then, the grated Yukon gold potatoes were added in. 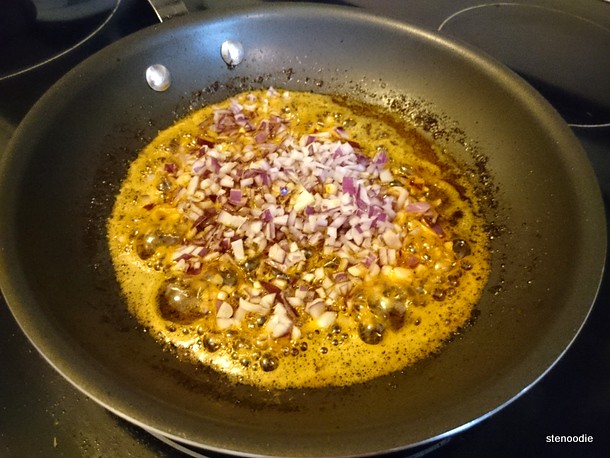 Meanwhile, the baby bell peppers, coated in cooking oil, salt, and pepper, were being broiled in the oven and ready for turning after the four minutes minutes in order to give it a bit of blistering. 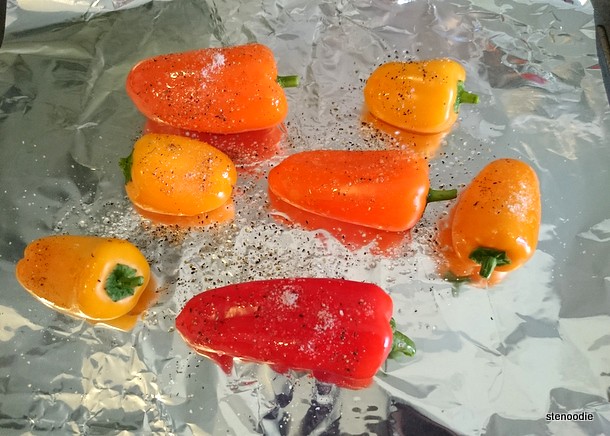 The grated potatoes took a while to cook since the goal was to make them crispy but tender. 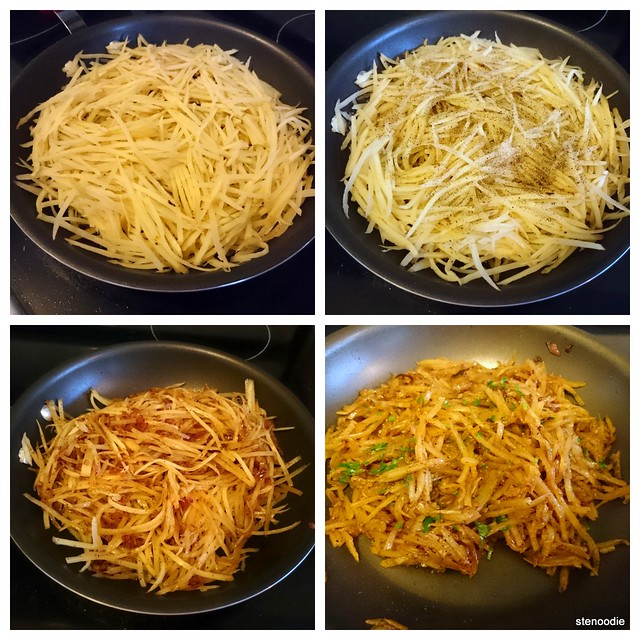 After everything was done, it was time to eat!  This recipe was fairly simple once everything had been prepped.  The prep work was what took the longest. 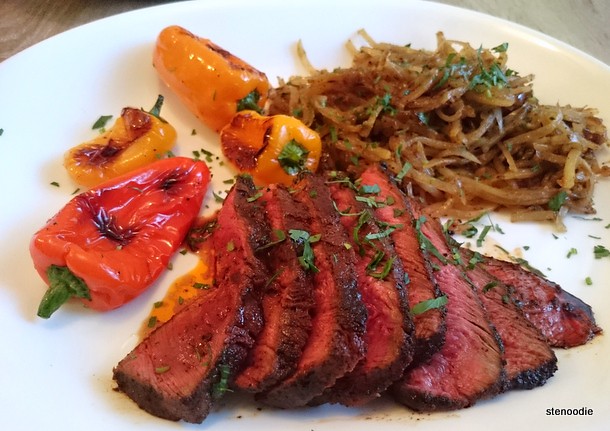 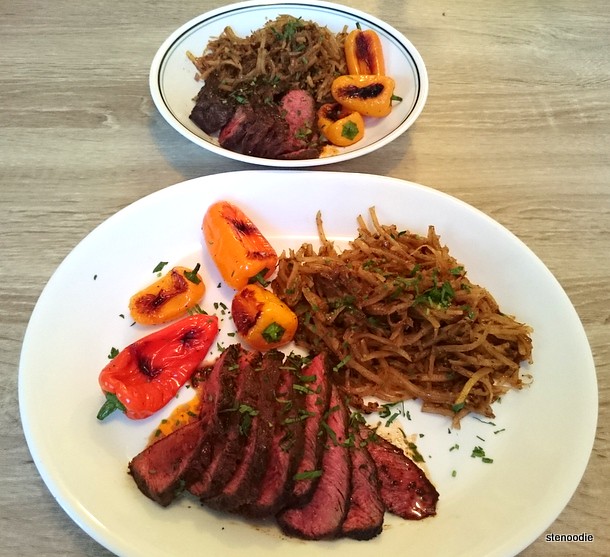 Bad photo, but this shows that this created two servings

Mmm, I was so impressed with the flavour of the crispy shredded potatoes.  The potatoes were indeed tender and full of flavour from the butter and pan juices.  It wasn’t too salty either.  The baby bell peppers were so juicy and the oil popped in your mouth as you bit a whole one.  They tasted so fresh!

I think we overcooked the steak a tiny, tiny bit this time as the butter basting on the steak did cook the steak from the outside when it was on the stove.  Nevertheless, it was still a medium rare and you could slightly taste the espresso and sweetness of the brown sugar.  I think even more espresso powder would have encouraged more of the flavour to come out in the steak.

All in all, a very satisfying and tasty meal from Chef’s Plate!  I was very grateful for another great recipe. 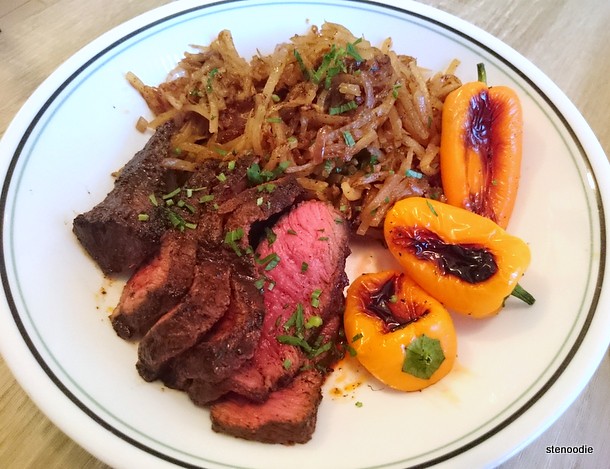 Some more photos, because why not 😛 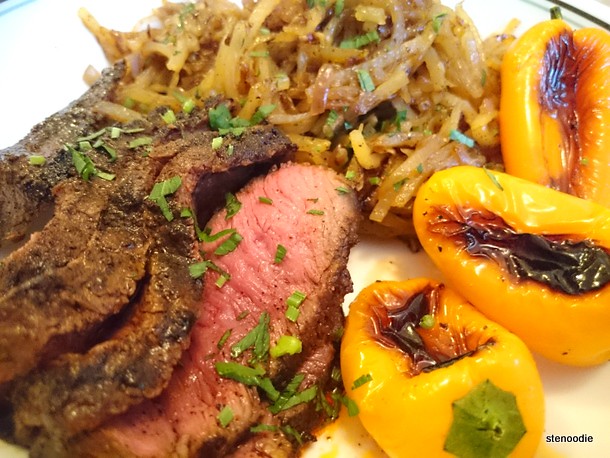 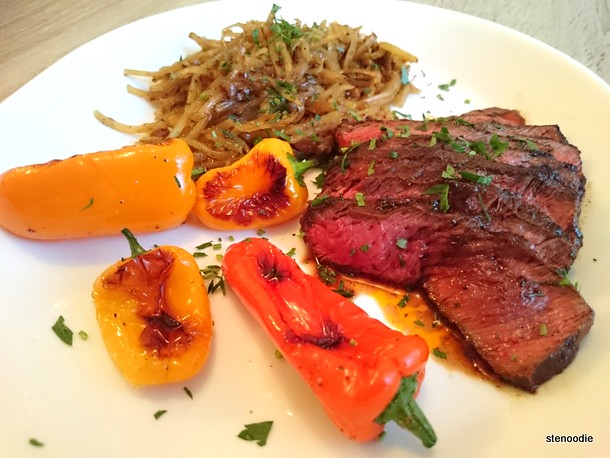 Simple but such a flavourful and tasty meal

If you want to try Chef’s Plate yourself at a reduced fee, use this code “#freeplatesfromstenoodie” after you pick your meals on their website.  You will receive four plates for free!  Try it out and happy cooking! 🙂