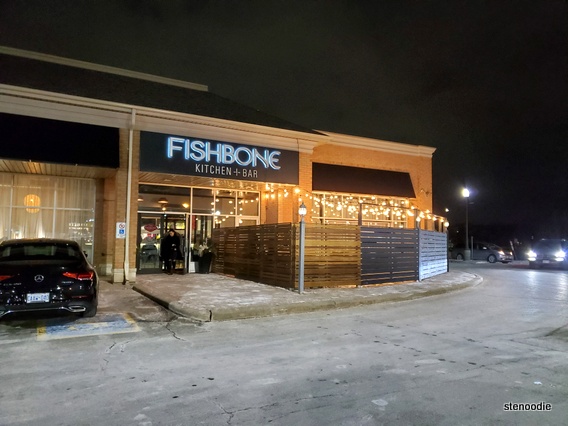 February 14, 2020:  I had heard much about this Portuguese and seafood restaurant, Fishbone Kitchen + Bar (302 Wellington St E, Unit #7).  My boo booked this restaurant at the Aurora location for us for Valentine’s Day dinner this year, which perfectly fell on a Friday.

The only reservation that was available and that worked for our schedules was 8 p.m.  We arrived there promptly on a very chilly winter night and were seated in the larger dining room on the right side of the restaurant.  There was plenty of parking in the plaza where the restaurant is located.  There were flickering candles on the tables and large globes hanging lights that contributed to a posh and romantic atmosphere.  There were already lots of patrons dining in.  The two-person table that we were seated at was a little small but considering it was one of the busiest dine-out nights of the year, it was to be expected. 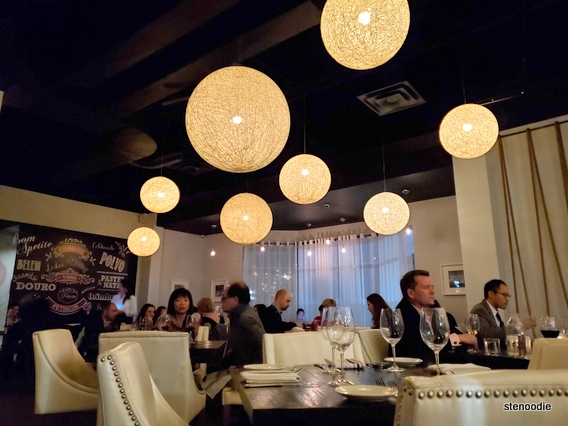 Fishbone Kitchen + Bar had a Valentine’s Day special prix fixe menu, but we decided to order a la carte from the regular dinner menu so that we could choose what we wanted instead.  We chose a total of four items to share.  The appetizers were actually more appealing to me than the actual mains. 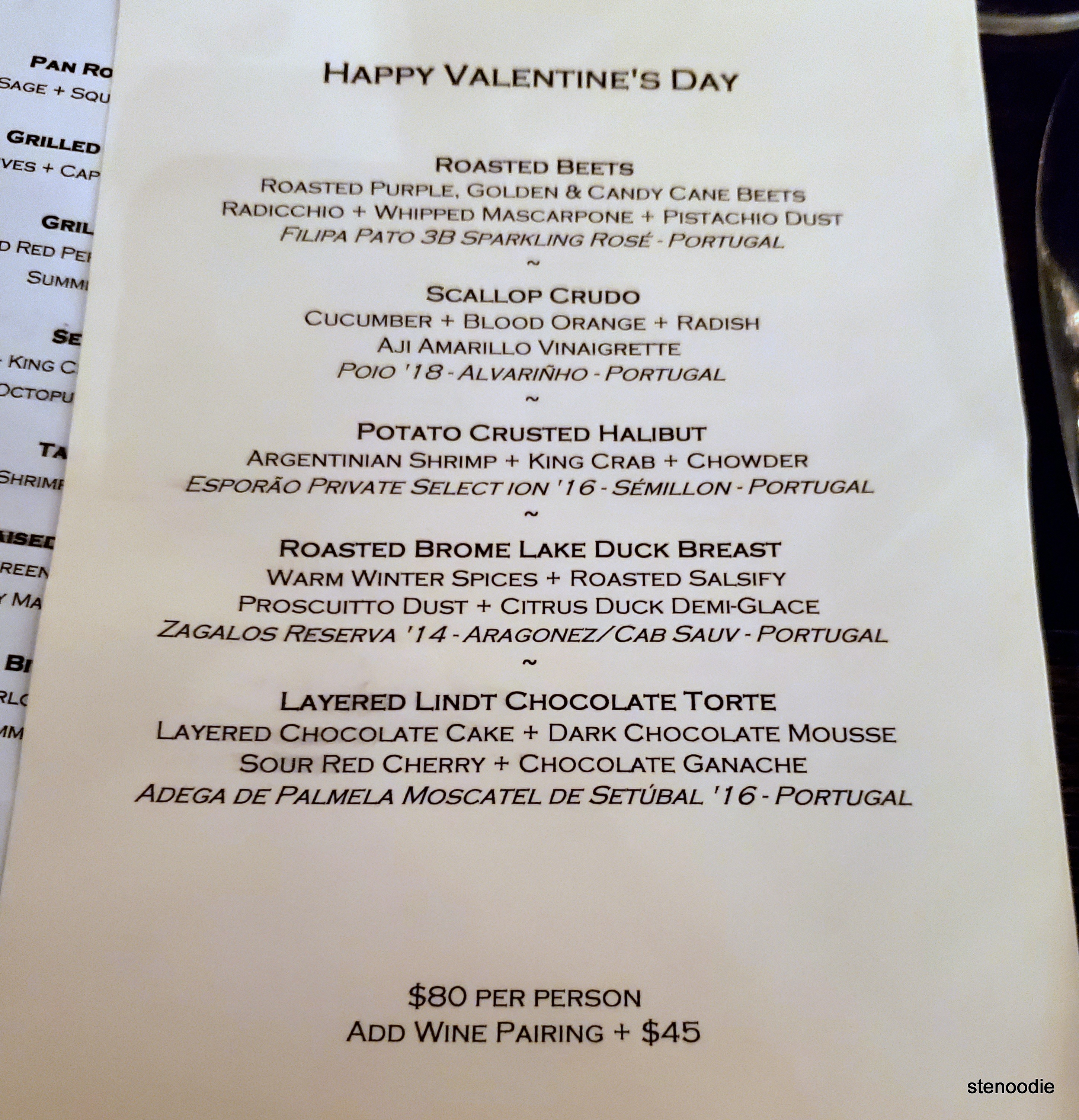 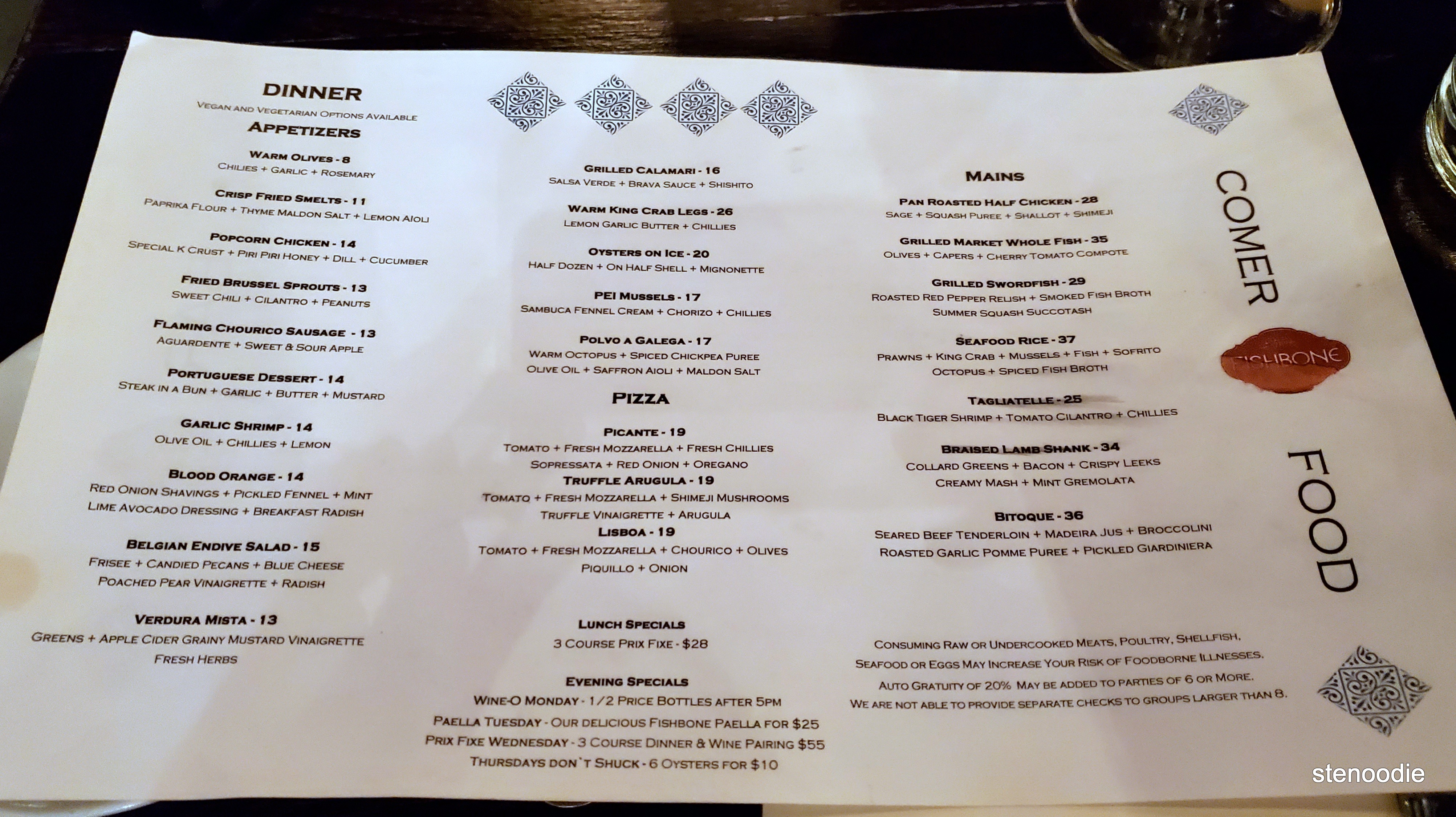 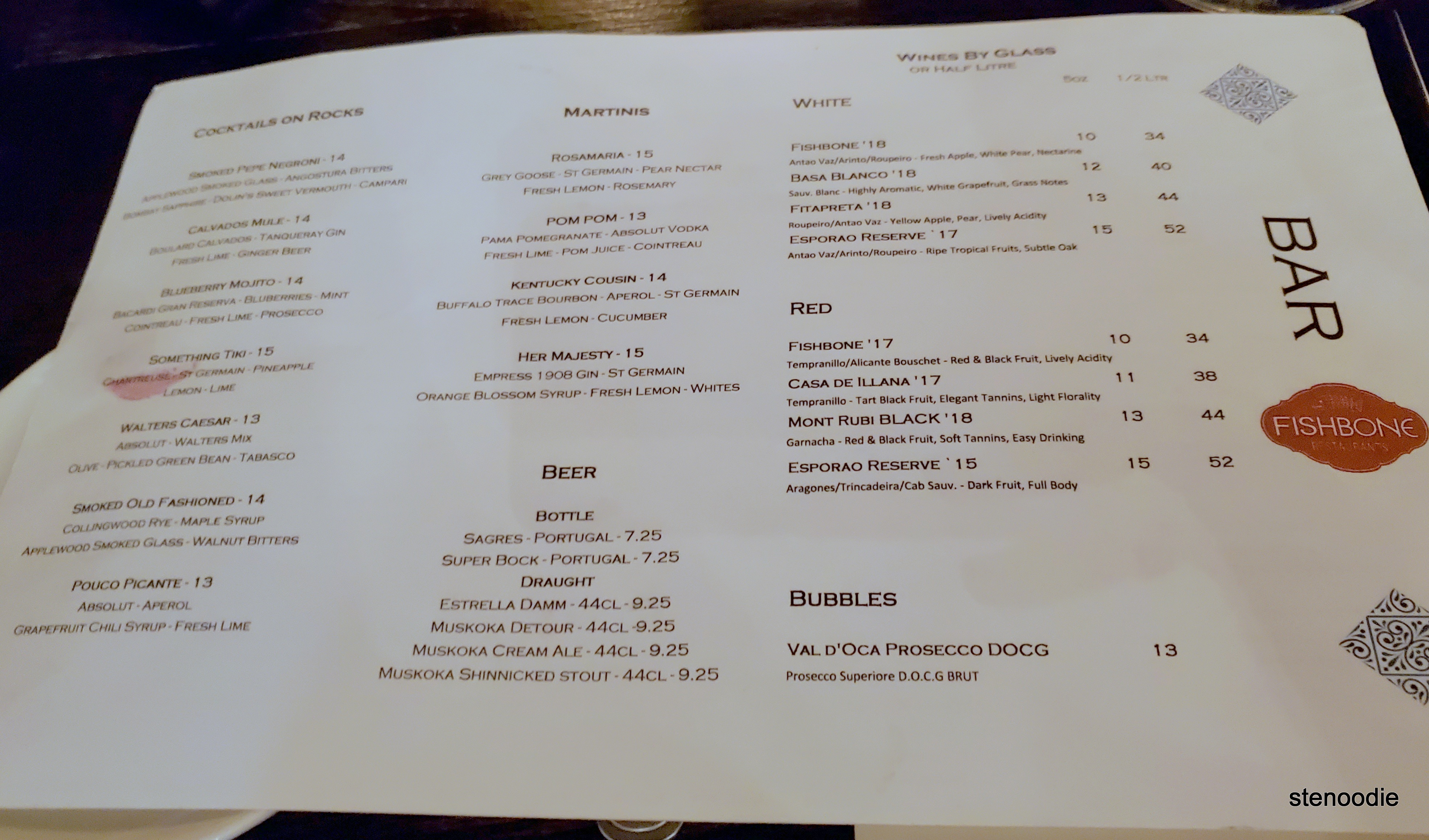 Ken ordered some kind of wine while I stuck with hot lemon water.  We were first served a platter of complimentary bread with hummus.  The bread was incredibly soft and so delicious!  I definitely remember wanting more than just the four slices on the unique cork platter. 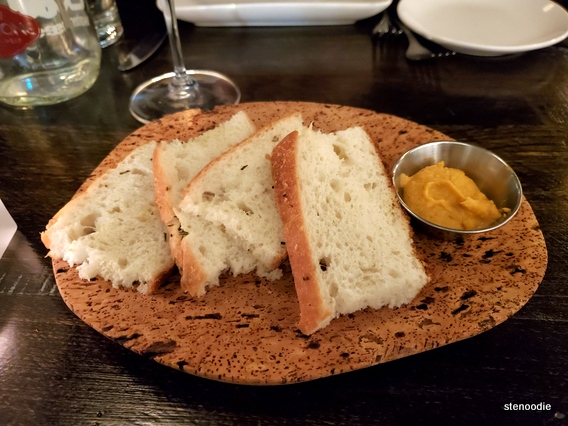 Bread and hummus to start 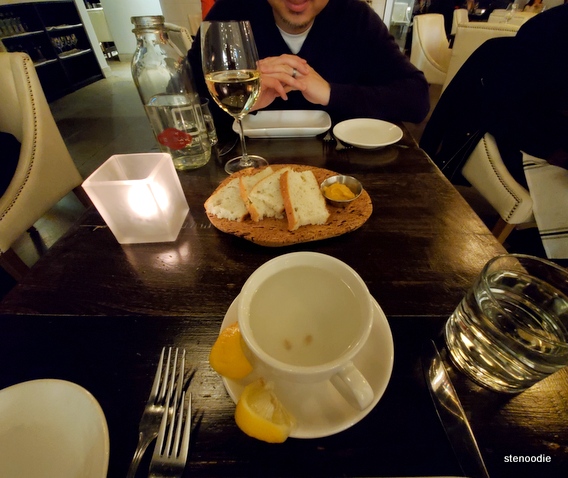 Table was kind of small

Our server separated our order into two and two dishes to be served that night.  The first two items that arrived were the Crisp Fried Smelts and Grilled Calamari.

The Crisp Fried Smelts was actually my favourite dish that night.  The smelts were lightly fried and dusted with paprika flour, thyme maldon salt, and served with a lemon aioli.  I again wished there were more smelts than what was served.  These were so easy to snack on and I ate so many of them. XD 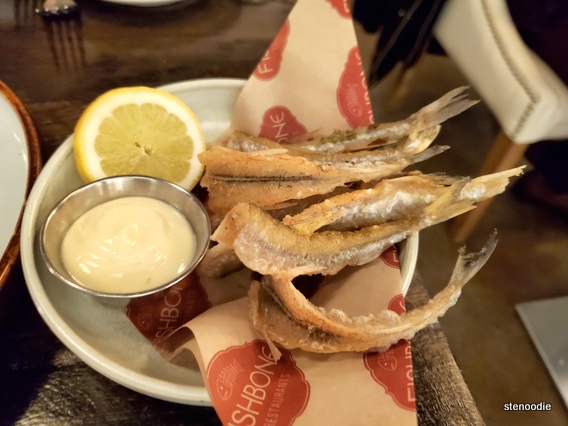 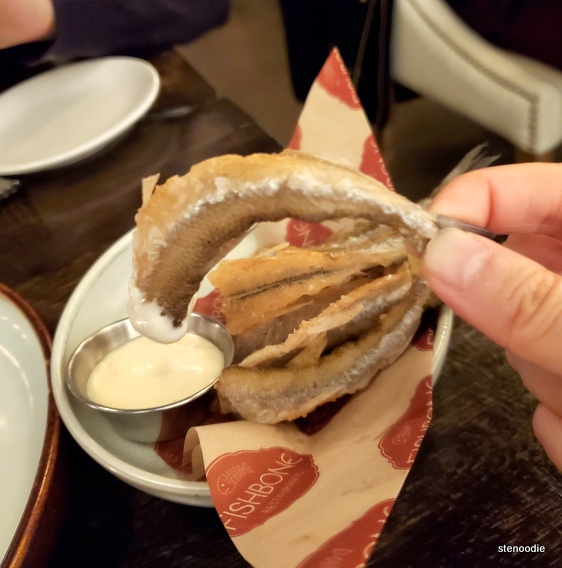 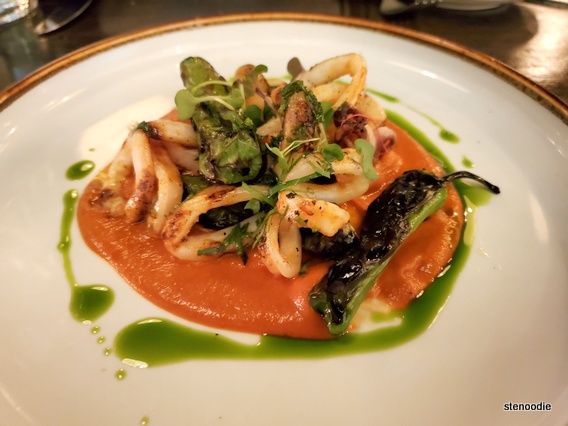 The Grilled Calamari arrived beautifully presented on a plate with salsa verde, brava sauce, and shishito.  The calamari was pretty tender and the brava sauce (it’s like the sauce that usually accompanies patatas bravas, a simple yet delicious dish of saucy Spanish potatoes) was tangy.  The shishitos were charred a little more than I would have liked.

Following this, we had the Seafood Rice and Polvo a Galega. 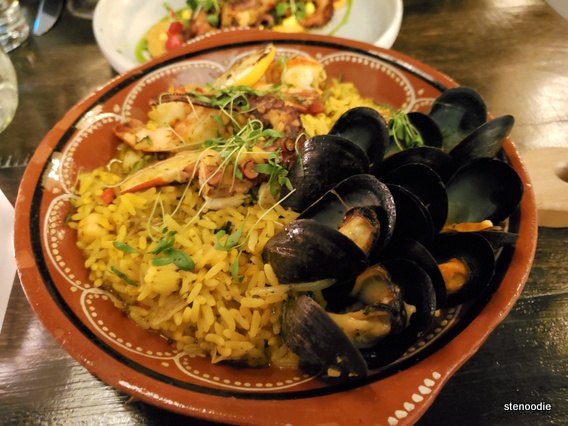 The Seafood Rice was like a paella to me but with fish broth.  It was served in a rich maroon ceramic dish with prawns, king crab, mussels, fish, and sofrito octopus in a spiced fish broth.  Lots of presentation points go to this restaurant; the mussels were all lined up on one side while the rice and the other shellfish were on the other side of the dish.  I really liked the rice and the fish broth.  Other than the mussels, there were only about one piece of each type of shellfish in the dish which makes sharing the dish not as wonderful but it’s a dish definitely enough for one person to enjoy. 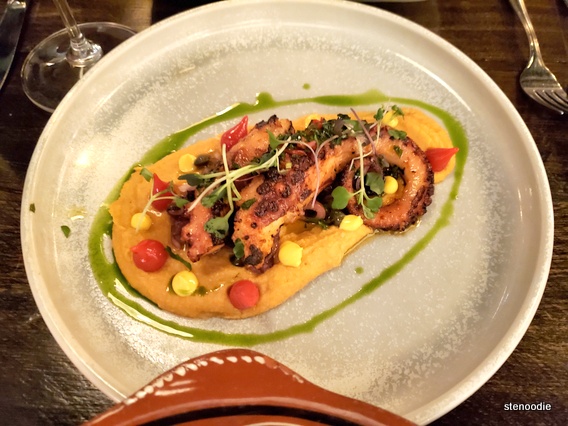 The Polvo a Galega was actually very similar to the calamari dish, which made me think that we should have ordered something else but we didn’t know this until we received it.  There was a big tentacle of warm octopus with spiced chickpea puree, olive oil, saffron aioli, and maldon salt.  It was still pretty tasty and the chickpea puree was especially savory.  It borrowed a lot of Portuguese flavours.

However, it was during this point of the night during the last two dishes that the fishiness of the dishes unexpectedly started to get to me and I was just not interested in taking any more bites unfortunately.  (It had nothing to do with the food; I was feeling naueous of my own accord since the dishes were sitting out longer and getting colder and thus the fishiness smell was getting stronger.) 😐 Ken was more than happy to finish off the dishes though. 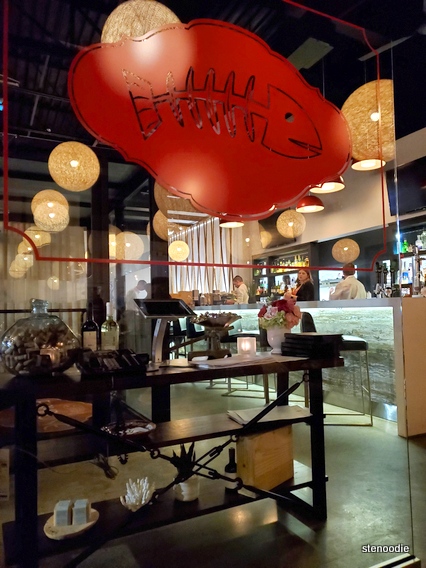 We took a look at the dessert menu and I definitely wanted to try something.  We ordered the Port Poached Bartlett Pear without consulting the server about exactly what this dessert was.

It was also at this point of the night where we found that there was a turnover of customers and the staff were all really busy.  There was still another round of customers even at 10 p.m.  The staff were busy changing over some of the tables to accommodate the new guests.  Our table was actually requested to be physically moved closer to the glass wall next to the hostess table to accommodate a four-party table to the right of us.  Thus, we didn’t have the patience to wait for an available server to ask a question about the dessert after ordering it. 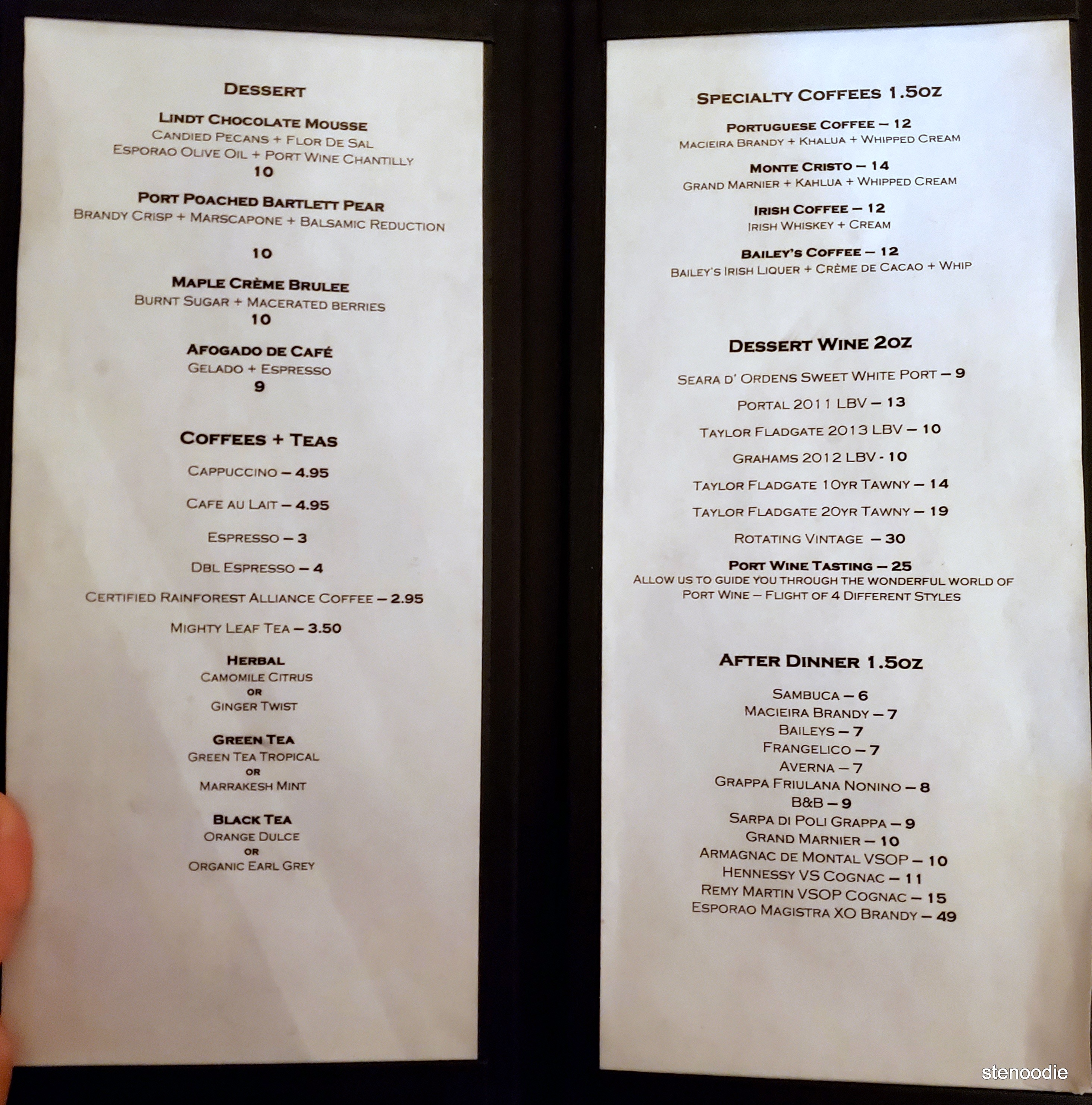 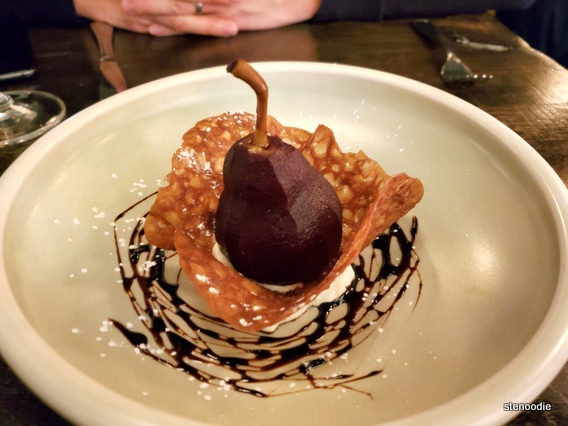 Anyway, the Port Poached Bartlett Pear was indeed a poached pear but it was doused in port wine!  It also had a brandy crisp around it, marscapone, and a balsamic reduction.  It was creatively plated.  However, after realizing it was drenched with wine, I couldn’t eat it.  It was unfortunate and we definitely should have inquired about it with the server before we ordered it.

Before receiving the bill, we actually received another complimentary dessert.  These were like little sweet dough balls that I don’t remember the name of. 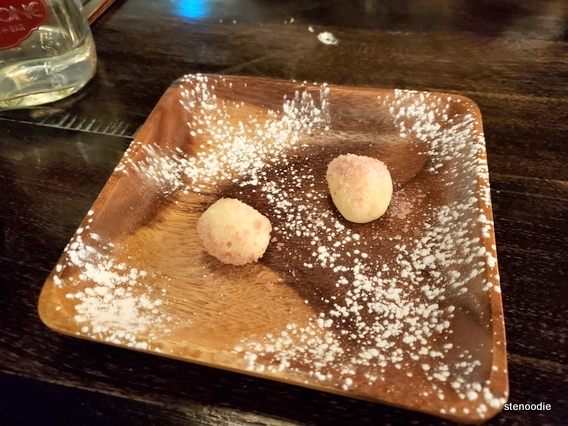 Complimentary dessert to finish off the night

All in all, it was really nice to dine at Fishbone Kitchen + Bar in Aurora for a special occasion.  The atmosphere of the restaurant was phenomenal and the food was great.  Looking back though, we could have chosen a larger variety of foods like the meats or veggie dishes (although I distinctly remember wanting to eat seafood that night and not order meat, so we did follow through on what we wanted that night).

I know that the Fishbone restaurant has a location in Stouffville as well.  I would be interested in trying that location out another day — probably a few years down the road to space out the seafood experience.