Social Conformity (without realizing it)

Yikes.  This was what I conformed to doing in the past 2.5 years and I didn’t even realize it until lately.  I’m waking up.  I really am.

It’s human nature to follow what others do.  In an unfamiliar territory or when wanting to adhere to customs and rituals, we just follow what the ‘pack’ does without really thinking, questioning, or rebelling.  This works extra easily on those who are easily influenced, who might have lack of direction in life, lack of emotional strength, or who like to follow others in general.

Following is not a bad thing at all.  There can be a lot of good in it.  In fact, when babies (human and animals) are first born, over the next couple of weeks and months and years, all they are doing is following and mimicking the ones closest to them (proximity) in order to know how to act and behave to survive.  They learn their ways of being by following and mimicking.  There is actually absolutely no wrong in doing this ‘mindless’ task.

When one grows up and conforms to proper social norms, standards, and rules and procedures in our society, it is necessary to know what they are so that you don’t get yourself arrested or ridiculed in public for not knowing how to behave and adhere to social scripts.  ‘Social scripts’ are invisible steps that we grow to know in order to act out certain goals.  For example, going to the movies is a social script that we all follow.  We — back before online ticket buying existed — would go to the movies, buy a ticket at the ticket counter by lining up, walk into the theatre, sit down, perhaps buy some snacks at the concession stand, and then sit down in our seats to watch the movie.  That is a social script of “watching a movie in the theatre”.

Social scripts are important and without them, there can be a lot of chaos in society.

However, the issue when it comes to social conformity happens when certain individuals follow a ‘wrong’ group of people into doing something that may not be ethical or something that they aren’t even aware is actually damaging for them.

I’m talking about network marketing companies, cults, gangs, bad social groups, and such.  When you go to these groups, over time, without knowing it, just like the girl in the video, you will slowly conform to what these people do, say, and think — all without realizing it yourself.  You won’t question WHY or the reasoning behind having to stand up every time the buzzer goes off.  You’ll do it because you’ll be outcasted if you don’t do it.  You’ll feel like you’ll be left out.  One of the most common human fears that we have is that we are alone and rejected.  In such a group, even though it doesn’t make sense to stand up for no reason every time the buzzer rings, you will learn to stand up anyway because every one else in the group is doing it.  The peer pressure and social pressure are so strong that eventually, you will do it too because you want to belong.

Human nature is so interesting.  Again, we follow because we want to belong but sometimes following can be a bad thing if you are not following a good group.

I just really have to say that you have to be careful of who you’re following.  Do you really know why you’re following them?  Have they explained why they’re doing the things they’re doing?  If they do explain why they’re doing it, are the explanations logical and make sense and not just because it has been repeated without critical thinking?  Once we fall into a habit, it’s so easy to keep it going — just like you saw the girl in the video standing up to the sound of the buzzer automatically even when the original pack had left.  Even more interesting was when she continued the practice and even taught it to the next ‘generation’ of individuals in the room.  She was the only one who had been directly influenced and yet she continued that practice without even knowing the origin of why it began.

It takes some time for someone to “wake up” from a group.  It starts by leaving the group first.  You need to have a life for yourself first and to learn to think for yourself again.  If you keep staying with the group, you will continue to conform to what they do and what they think.  It’s like brainwashing.  It might not be intentional ‘brainwashing’, but it’s human nature to gradually think like the group if you hang out with them long enough.  There are actually many other studies and experiments about this.  This really reminds me of when I studied Social Psychology in university and read all of those case studies and experiments on these things.  How did I not think about those before?!

If someone already starts off being strong-headed or someone not easily influenced, then in an experiment like this, they won’t be so easily conformed — or rather, I have to say there is a less chance of it happening.  However, not many individuals are strong-headed enough when faced in a group like this.  Peer pressure is such a strong force — leading to examples like teenagers first learning to smoke because they see their friends doing it, participating in teenage sex, bystander apathy, and so much more.  When you are in a group, you just don’t tend to think as critically as you do when you are alone.  It’s just human nature.

I’m actually tempted to Google some more examples, hopefully in video format like the one above to watch and share, because this is just so fascinating.

I have to admit that I was part of the social conformity and since leaving it, I’ve been “woken up” and thinking for myself again.  What the heck was I doing thinking that what I was doing was right.  There is so much more in the world than what I was doing before.

Can you think of any other social experiments that relate to social conformity that you can share?  I’d love to read or watch some!

Yes, Google/YouTube has SO MANY videos and experiments on social conformity!  These are so interesting to watch:

The proper term for all of this is “normative social influence”:

“Normative social influence is a type of social influence leading to conformity.  It is defined in social psychology as “the influence of other people that leads us to conform in order to be liked and accepted by them”.  The power of normative social influence stems from the human identity as a social being, with a need for companionship and association.  This fact often leads to people exhibiting public compliance—but not necessarily private acceptance—of the group’s social norms in order to be accepted by the group.  Social norms refers to the unwritten rules that govern social behavior.  These are customary standards for behavior that are widely shared by members of a culture.”  (quoted from Wikipedia.)

Famous social experiment on monkeys conforming to a rule that they were “taught” even though it doesn’t make sense later.  Fear and violence (perceived or not) are used as tools to make the monkeys conform. 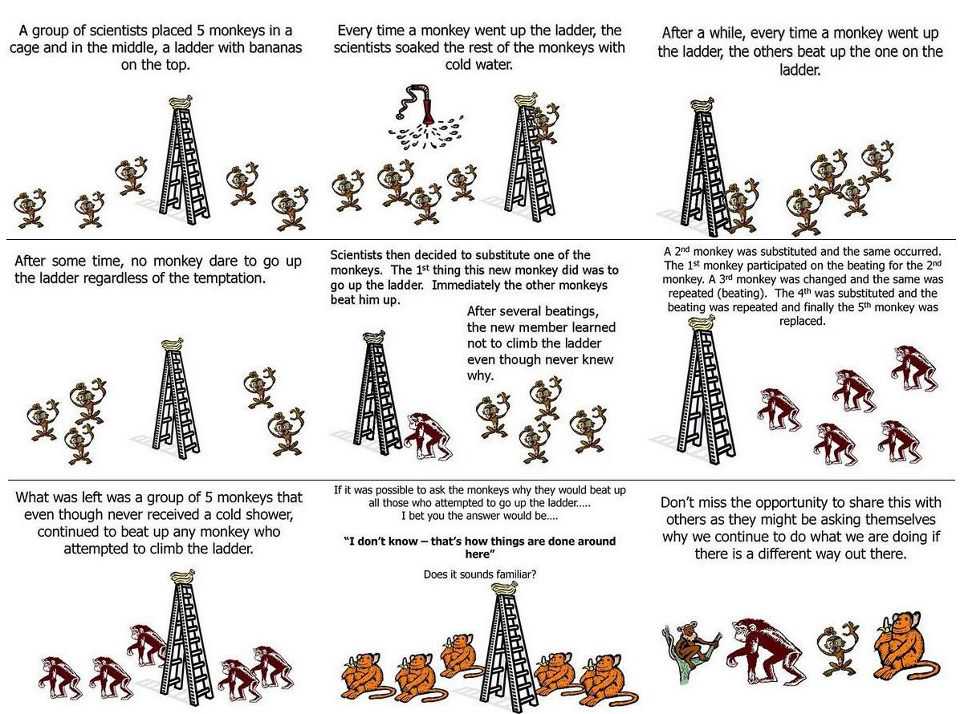 Social conformity experiment on monkeys and a ladder

I'm a stenographer, foodie, avid traveller, and new mom who loves to share her experiences with the world.
View all posts by stenoodie →
This entry was posted in Learning, Life and tagged Asch conformity experiments, brainwashing, cult thinking, following others without thinking, herd mentality, It's human nature to follow others without thinking, network marketing social conformity, not wanting to feel left out, Social conformity, social psychology. Bookmark the permalink.

3 Responses to Social Conformity (without realizing it)