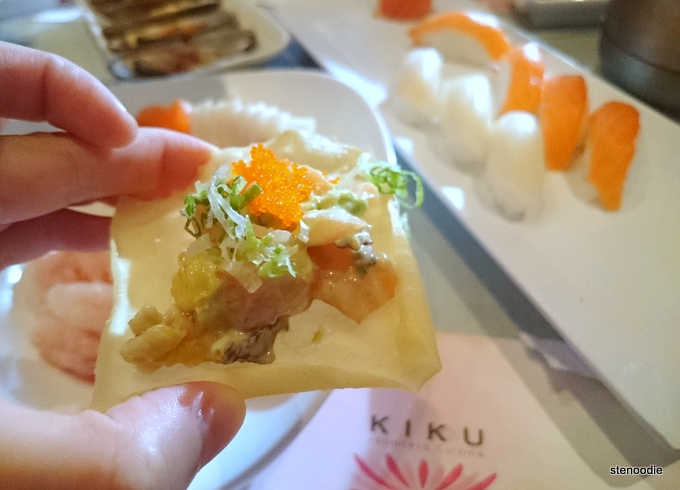 Sushi Kiku Japanese Cuisine is a modern casual Japanese restaurant in Markham offering all you can eat lunch and dinner service as well as a la carte take-out options.  It is located at 230 Commerce Valley Drive East where there are other restaurants like Tapagria, Duo Patisserie, Bombay Bhel, and Congee Queen.

For Nicole’s farewell get-together dinner party, she booked out two tables for an all-you-can-eat Japanese dinner.  They operate an iPad ordering system similar to KAKA All You Can Eat (I think it was the exact same operating system) where you can order the food items either one by one or in six depending on what it is (you can order a sushi individually but must order six rolls to count as one order) and send it in automatically without having to call for a server.  The food also arrived on the table almost immediately, as fast and as efficient as the service at KAKA, without any missing items. 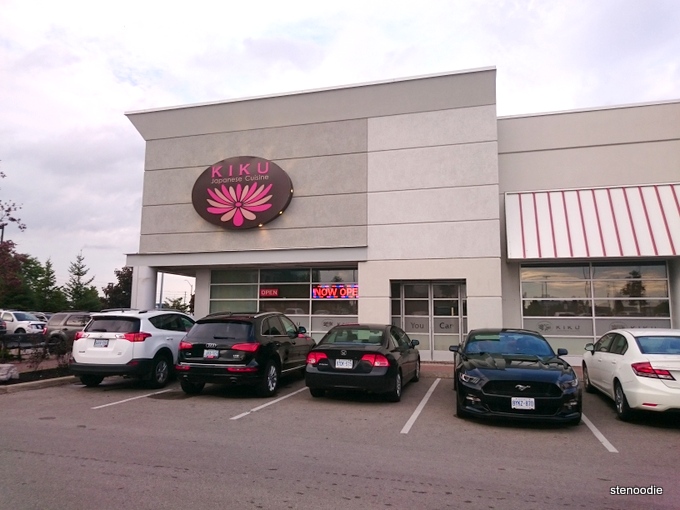 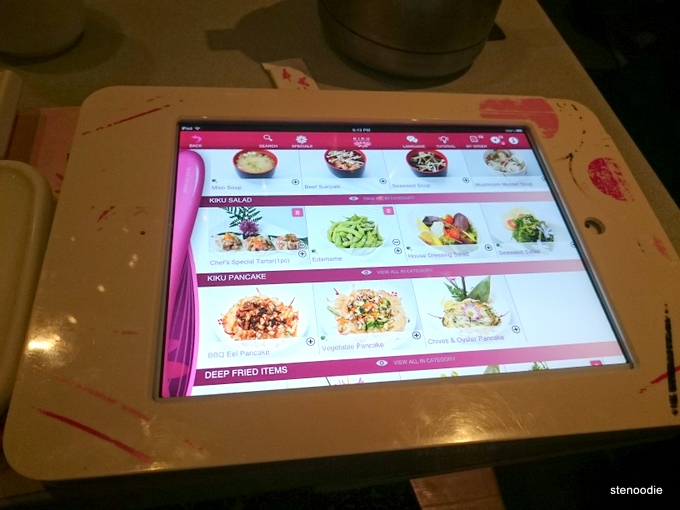 We went on a crazy food haul this night and ordered a lot more items than we expected.  Especially for our table, we thought at first that we were going to order for the entire table, but it wasn’t until a few minutes later when we realized the other half of the table would be ordering from their own iPad too.  That resulted in a lot of extra food that night for us unfortunately..

Sushi Kiku Japanese Cuisine had a very good selection of hot and cold items, sushi, sashimi, fried items, udon, fried rice, teppanyaki, desserts, and more.  I thought that their selection compared very much to KAKA’s (I’m only comparing it to KAKA since I had just been there recently and their ordering system is the same — I’m not affiliated with KAKA at all, just so you know. 😛 ) 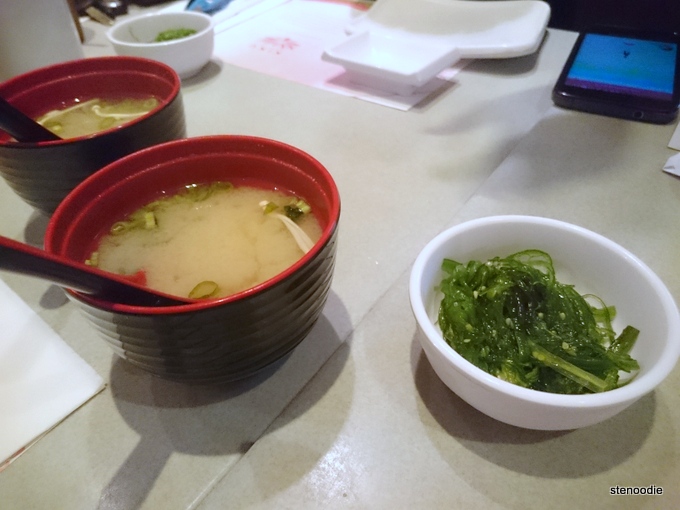 I especially liked the Las Vegas Roll as well as the mackerel and white tuna sashimi that night. 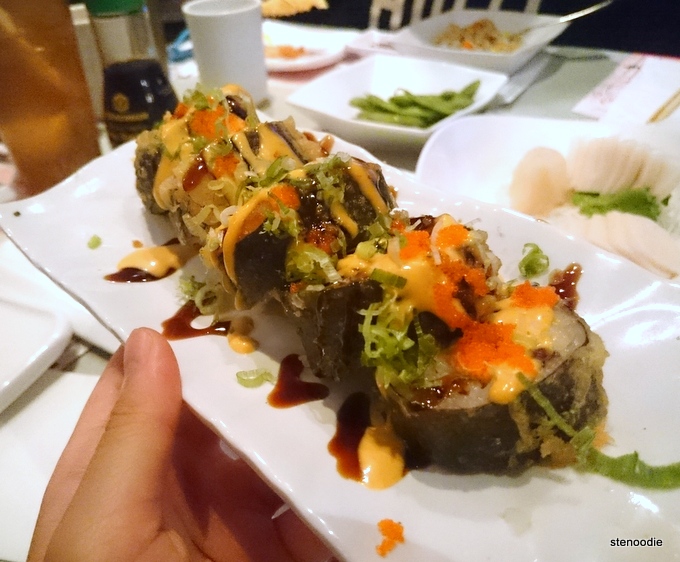 They presented the sashimi so beautifully! 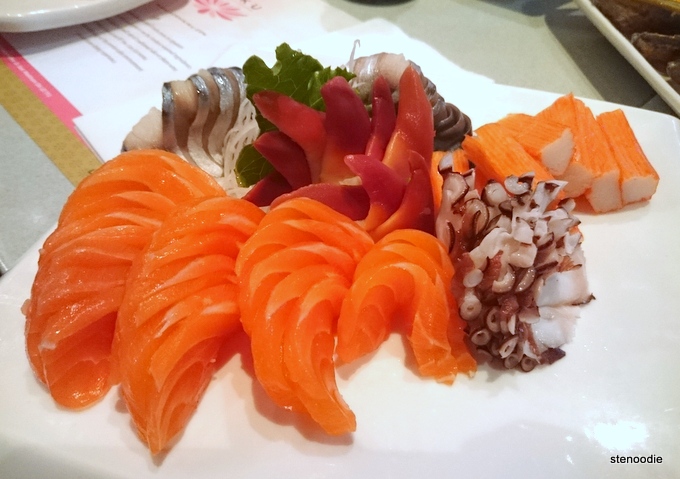 Sashimi of all types! It was really thinly sliced 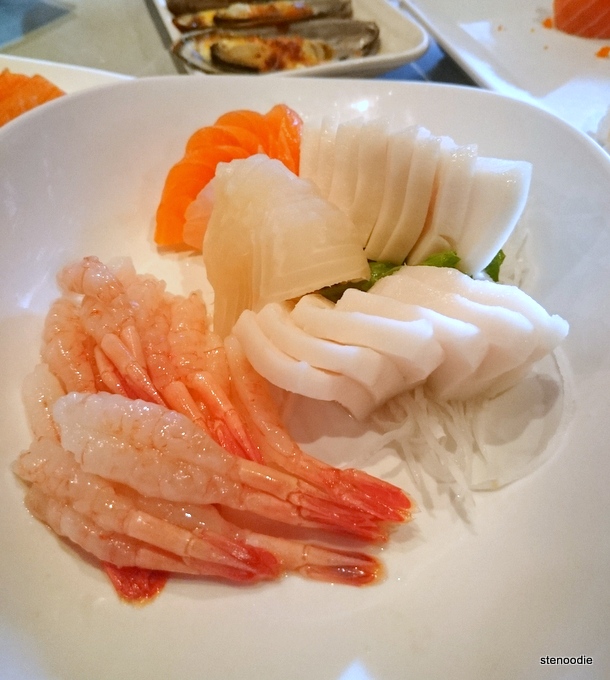 The white tuna melted in my mouth!

Here are some more photos of what we ordered that night.  Since I spent most of my time to eat and socialize, the photo quality is really not that great and I also didn’t take pictures of everything that we ate (we ordered a lot of food!).  Haha, enjoy my photos regardless! 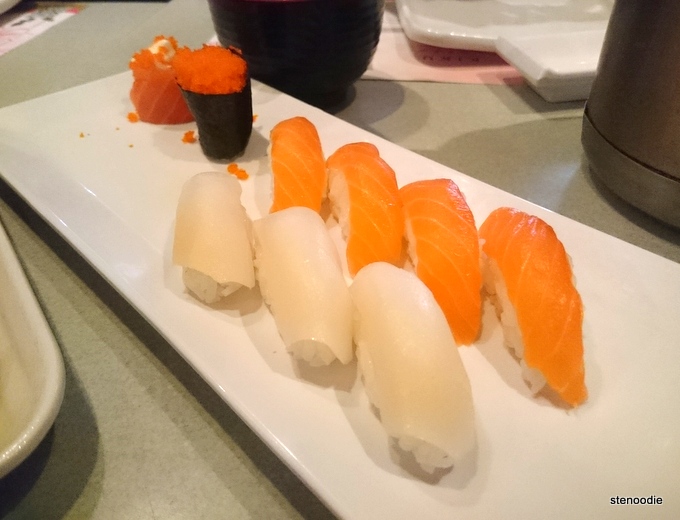 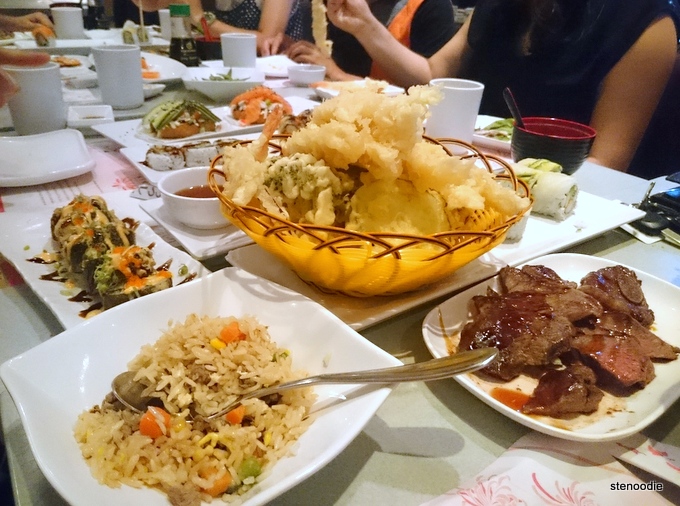 The food was starting to pile up… 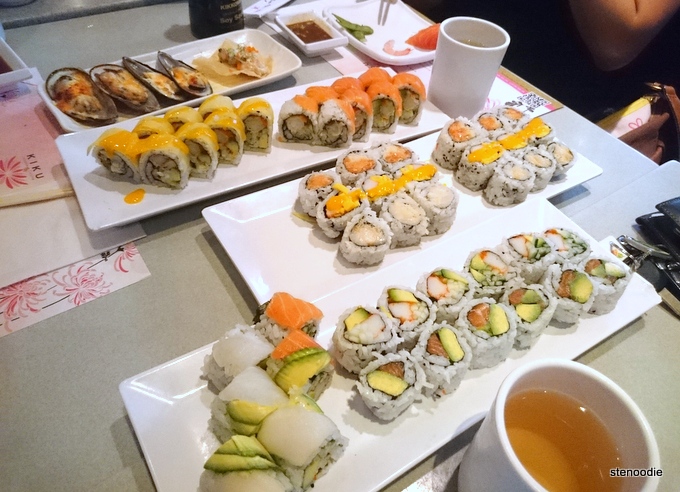 We ordered too many rolls… 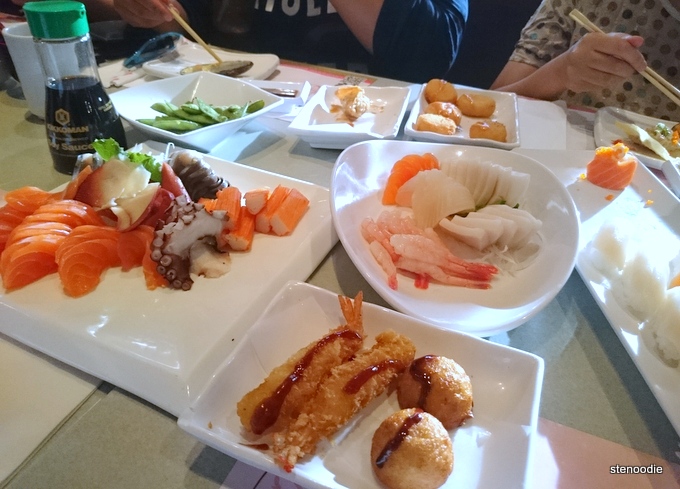 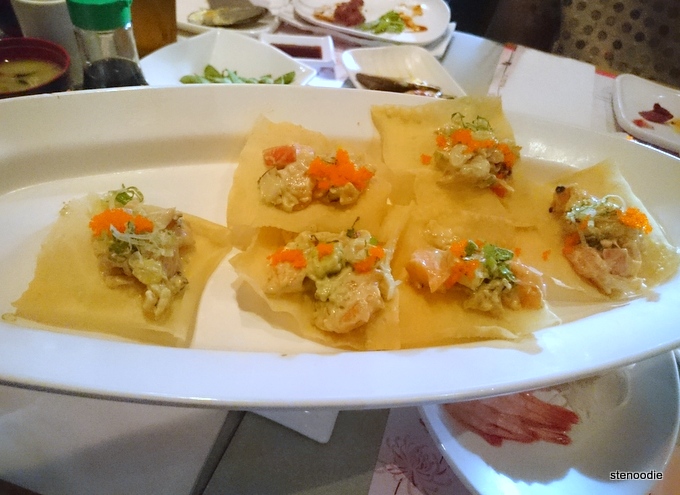 The Tostadas were just okay; a bit bland and the tortilla was a little soggy.  Not crisp enough. 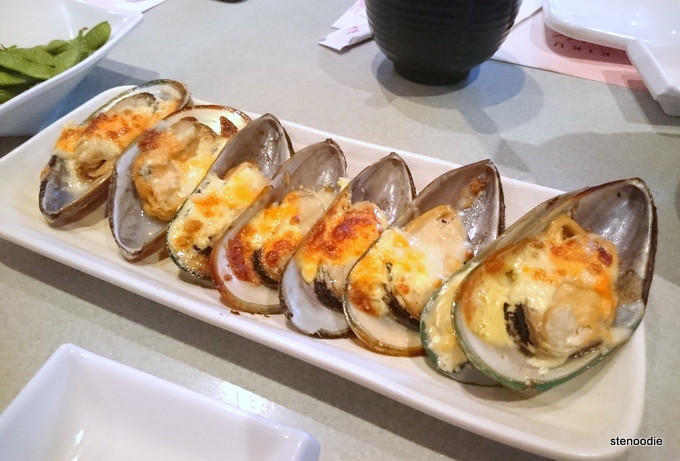 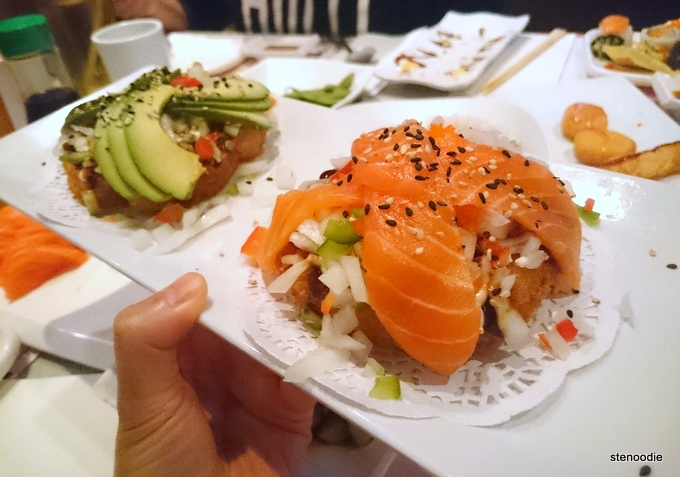 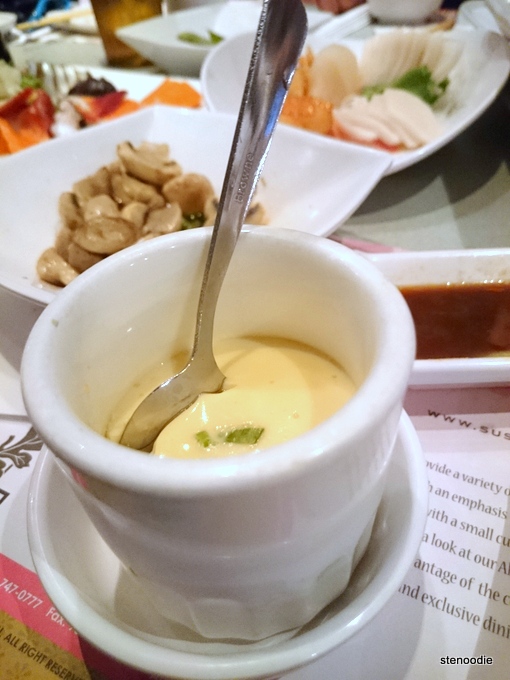 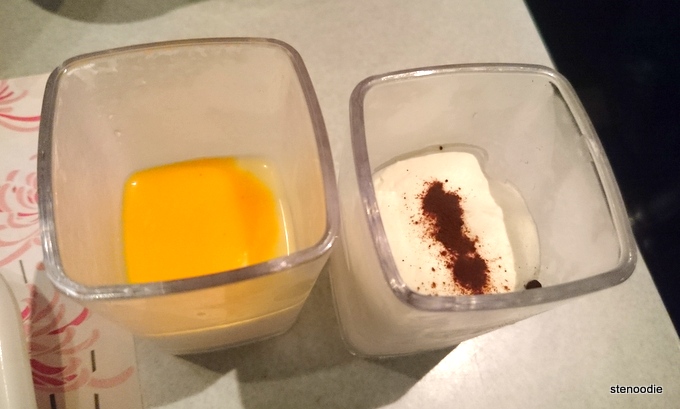 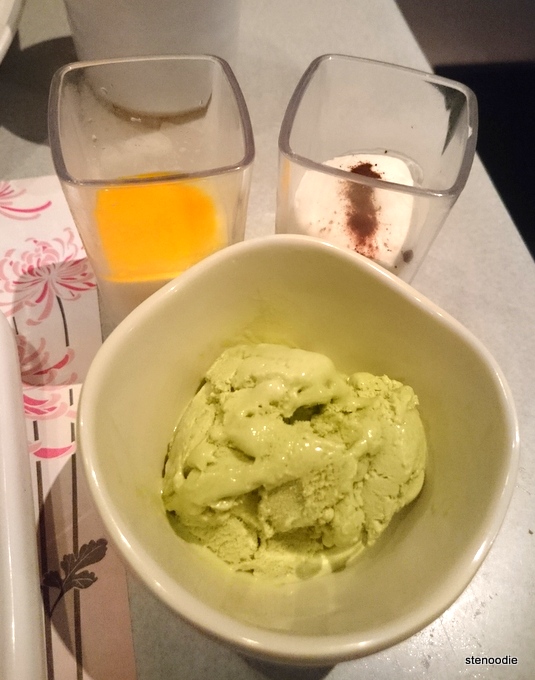 The green tea ice cream was also really good too.

I also really appreciated how they didn’t add a 15% mandatory service charge to our bill (like most restaurants do) even though we had more than 20 people in our party.  That really makes a big difference in the bill! 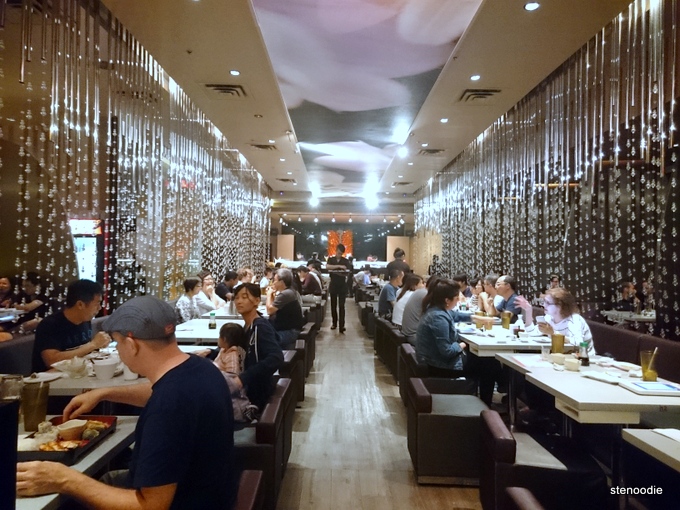 It was gorgeous inside! Really nice casual and nicely designed space to dine in

I would say that if you have a big celebration, a large party of people who like to eat and socialize, and enjoy eating sushi, Sushi Kiku Japanese Cuisine is a really good place to consider!  It was $27.99 for a weekend dinner price for an adult which I thought was really reasonable.  Also, they provide free wifi in the restaurant! 🙂  (The Congee Queen next door is a pokestop. 😛 )