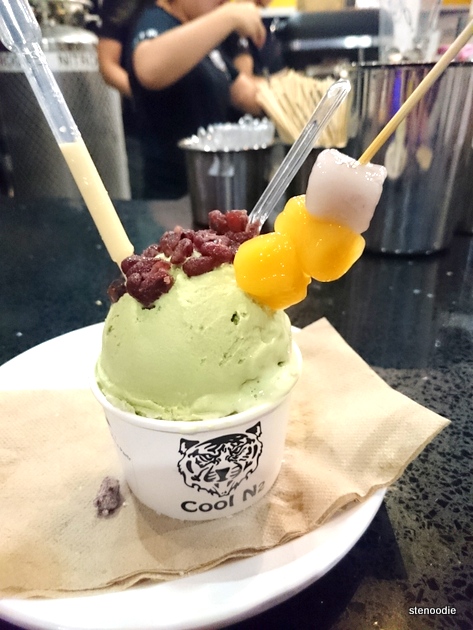 The newest and latest dessert trend has come out of Taiwan to debut in Markham called Cool N2, serving liquid nitrogen ice cream.  Cool N2 Ice Cream (“N2” for Nitrogen) is located near Langham Square on Kennedy south of Highway 7 where ZenQ, Morals Village Hot Pot, and Cha Me Cha Markham are (it’s outside the mall).

When Priscilla and I walked in at about 9 p.m. on a Monday, there were some customers enjoying this brand new ice cream standing around the counter.  There were no seats to dine in.  I also noticed the gigantic tanks of nitrogen gas to the left of the doorway too. 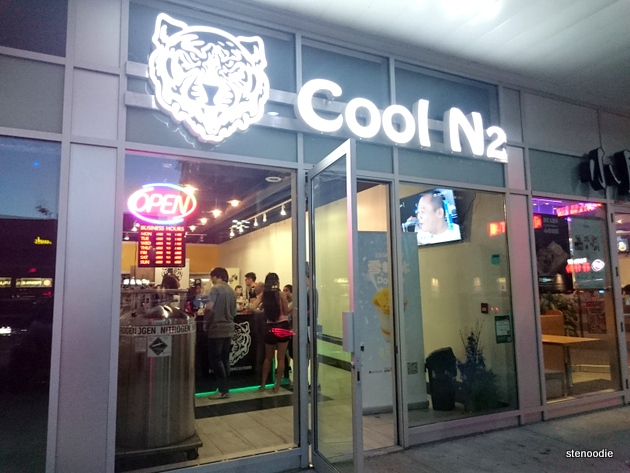 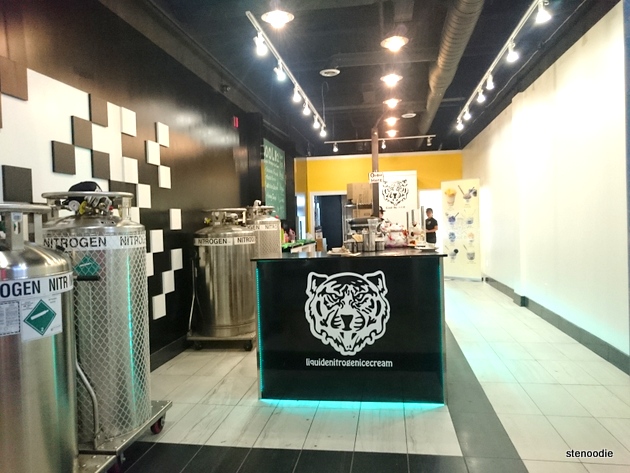 The space inside.. lots of space to stand around 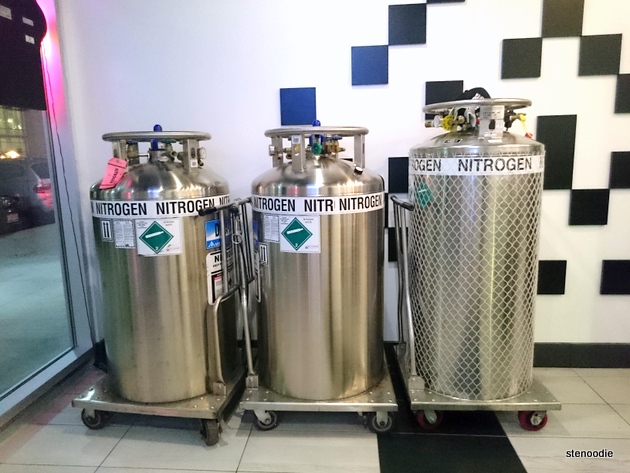 Nitrogen gas tanks inside the store

We ordered a medium size of the Matcha Partner ice cream ($5.99) which came with matcha ice cream, red bean, taro, and condensed milk.  It cost $6.50 after taxes.  There were seven other types to choose from. 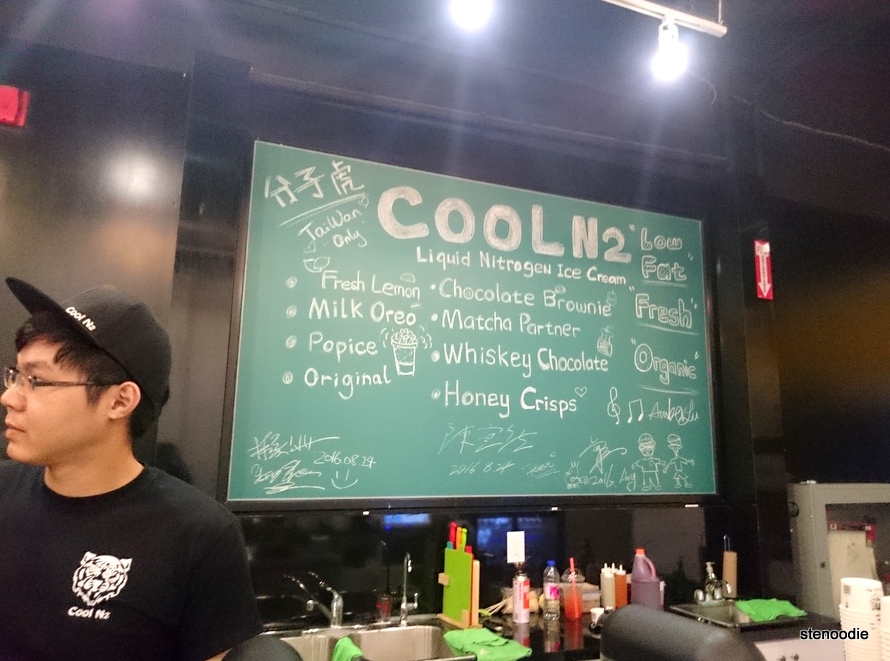 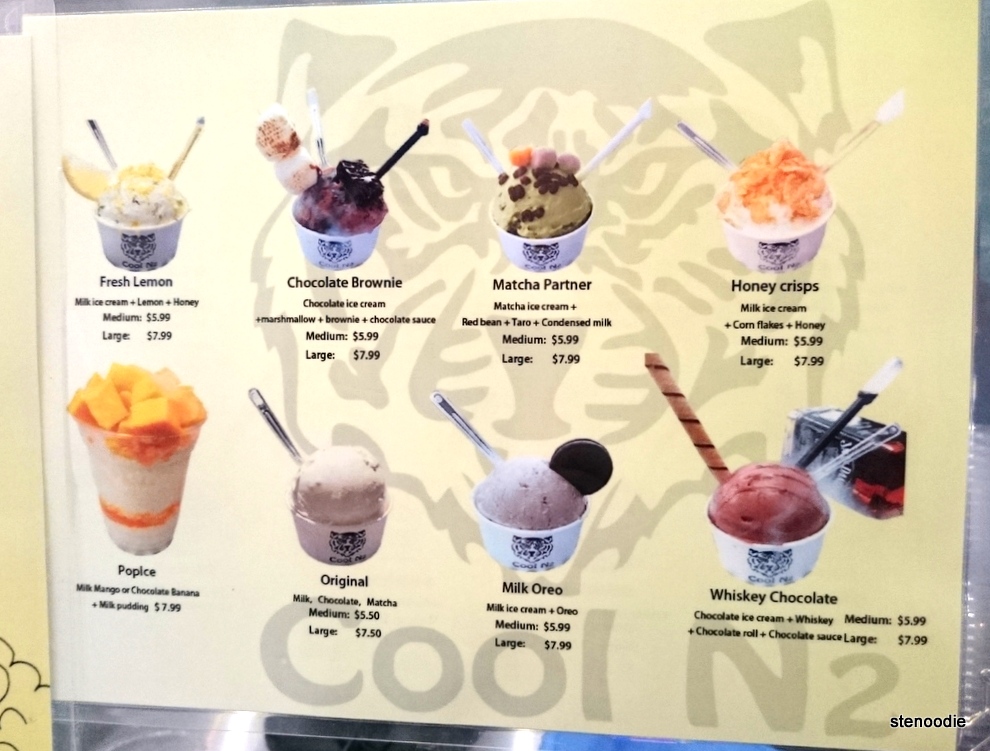 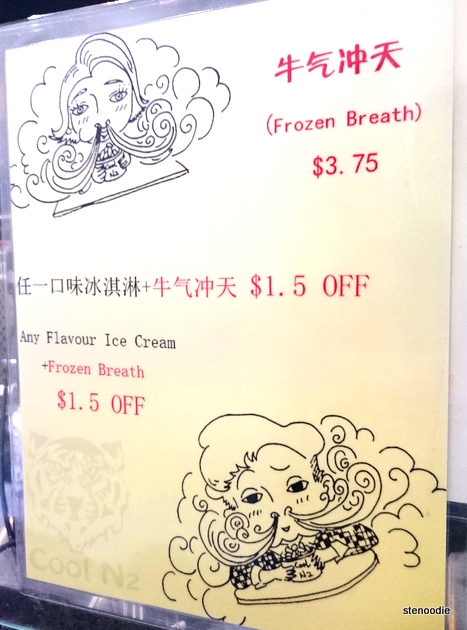 The staff behind the counter got to work immediately on our ice cream.  They poured liquid nitrogen into the mixer which produced lots of white smoke.  Then they scooped it into a tiny cup, put red beans on top of it, and stuck in a stick of taro balls, and a tube of condensed milk into the ice cream. 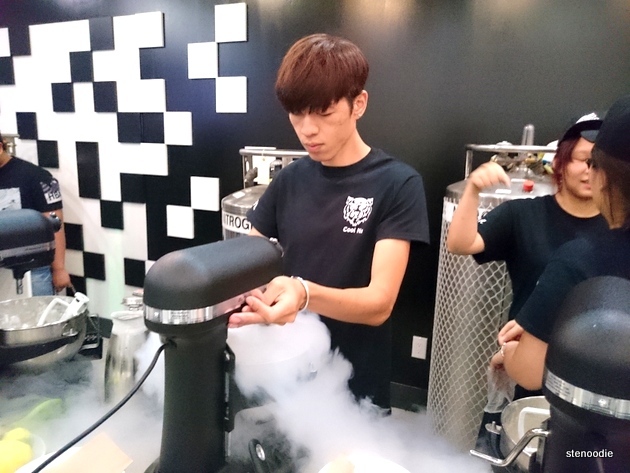 The making of the liquid nitrogen ice cream.. 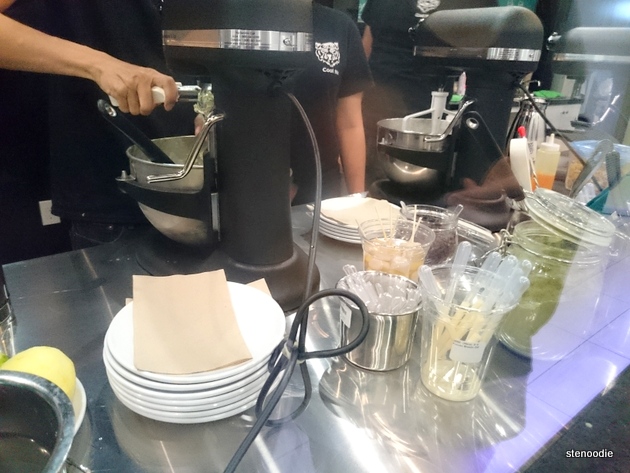 It’s a rather quick process 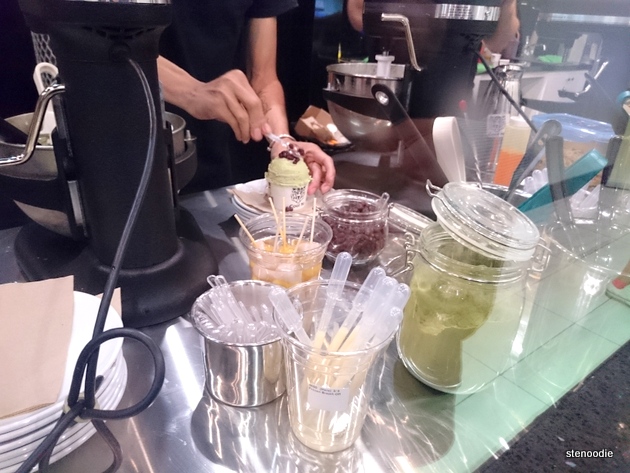 The cup was so tiny. Good thing the scoop of ice cream was large and round

Then, as they brought it onto the counter to be served, they poured some more liquid nitrogen on it to make it “smoke”.  And that was it…  It was rather an underwhelming process.

When we tried the Matcha Partner, the matcha ice cream was very bland and tasteless.. it was a little milky and watery too.  The only part that provided some sweetness or flavour to it was the red bean. 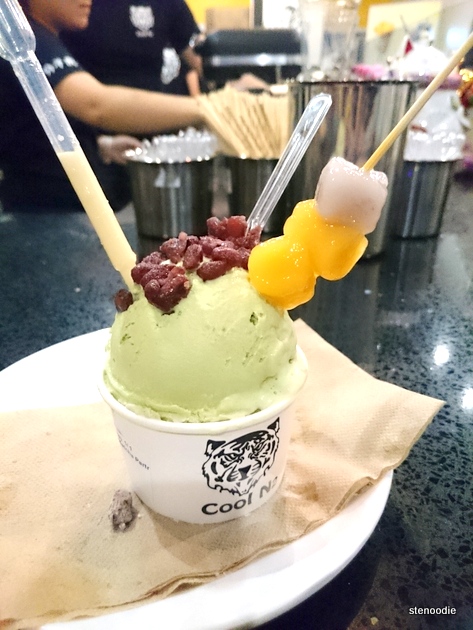 There was a couple next to us who ordered the Fresh Lemon flavour after us (which had milk ice cream with honey and lemon).  They audibly complained of the lack of flavour and left before they even finished the cup.  They were upset they spent $6.50 on it. 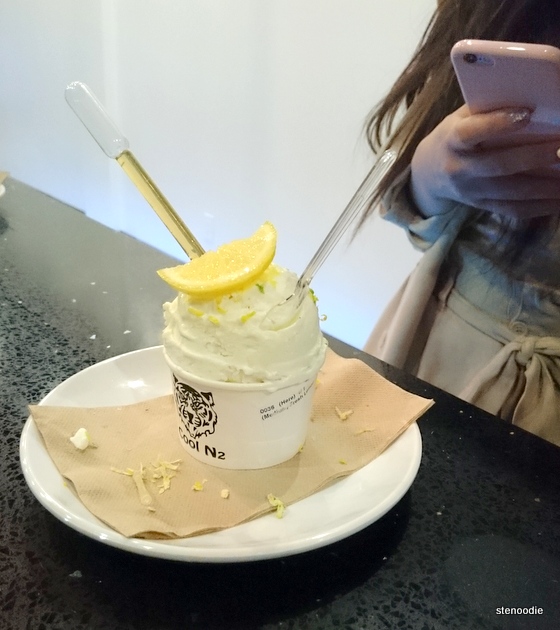 I’m giving this place three months, tops, to survive.  I’m not cursing them.  I’m just making a guess.  This is not even an attractive food hype because the ice cream’s smoke doesn’t last long enough to take photos and it doesn’t even taste good.  Bleh. 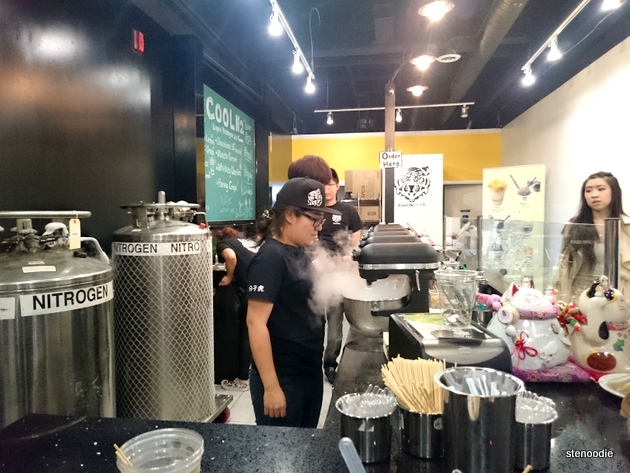 Oh, and they have something on the menu called “Frozen Breath”.  When I asked the lady behind the counter about it, as much as I tried to understand her answer in broken English between several tries, I couldn’t understand what she was trying to say..  Something about “crunchy” ,”coming out of the mouth”, “a fun thing”.

I resorted to looking around the shop and understood what it was from the customers standing around who ordered the Frozen Breath.  It was a cup of Cheetos on a stick which had been doused in liquid nitrogen so that after you bit into the Cheetos, your mouth would temporarily release the smoke which could be considered a visually fun and nifty “trick”.  It probably didn’t taste that great because some people left their unfinished Cheetos on their plates before leaving. 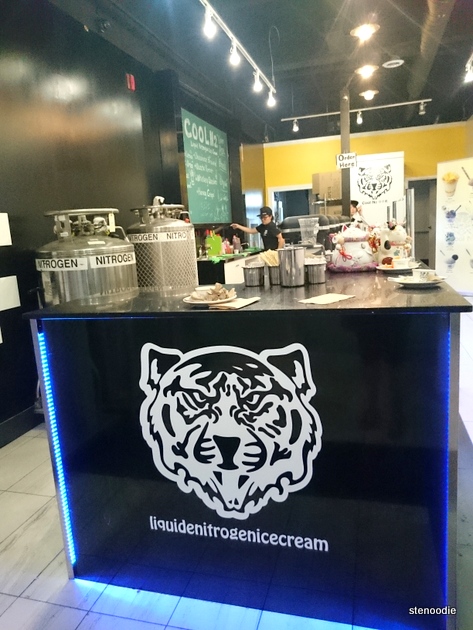 There are no seats inside Cool N2. To dine-in, everyone crowds around this counter to eat

The staff didn’t seem to particular care about their customers either to see if they enjoyed the treats and didn’t care for feedback — you would think they would since they had only been in business for a week and would want to be received positively by their incoming customers.  (I say this because after they served us and the other last customers, the four staff members crouched down to the floor and all played on their phones… lol.)

Thus, that type of apathetic customer service plus poor quality of desserts gives a poor indication to me and the reason why I really can’t see a staying power of Cool N2.  But who knows, I might be proved wrong. 🙂