Posted on September 1, 2016 by stenoodie 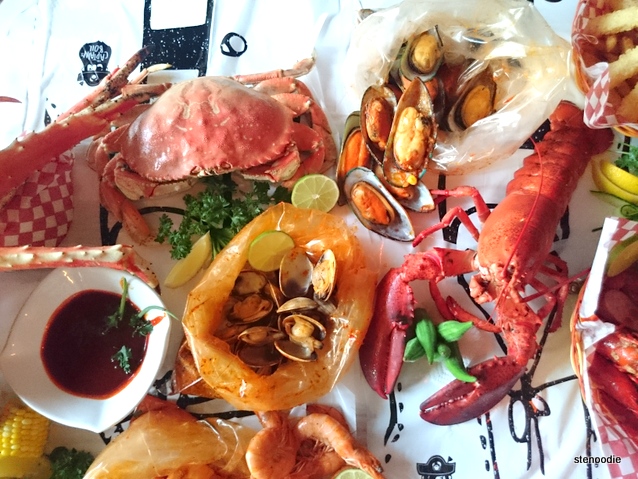 The Captain’s Boil located at 671 College Street in Toronto

I have fallen in love with eating seafood boils and after this recent visit to The Captain’s Boil, it just reconfirms how delicious this messy hands-on way of eating seafood is.  The Captain’s Boil has been growing steadily throughout Canada and not only now has locations in Toronto (where they first started in November of 2015) but also in Vancouver and Montreal as well.  Their fifth location in Toronto just opened up on 671 College Street in Little Italy.  I was graciously invited here by Mary of @themary_tang, a fellow foodie and blogger for a media preview event to try out their food.

I really enjoyed my very first visit to The Captain’s Boil and had fond memories of the visit even after I visited other seafood boil restaurants that have since opened up in the GTA. 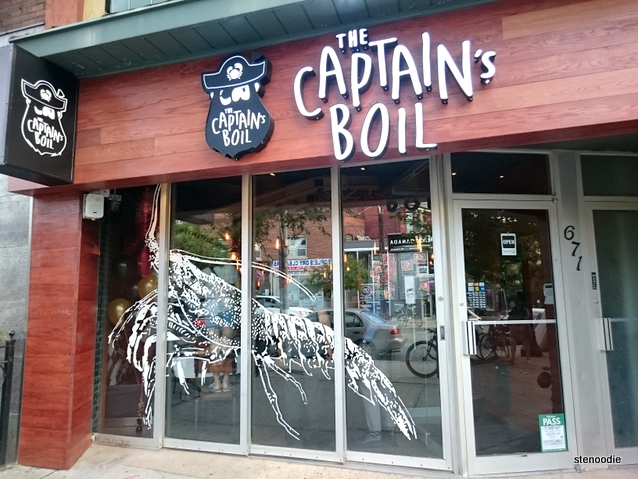 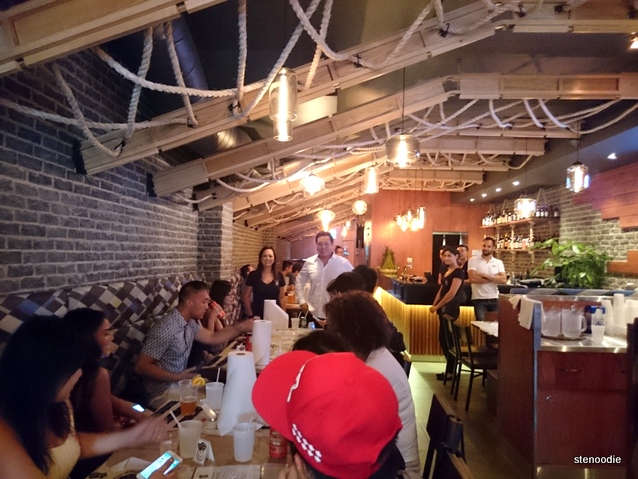 This intimate foodie get-together was slated to begin at 6:30 p.m. (I was unfortunately stuck in traffic and had a delayed arrival) but luckily they started right after I arrived.  Amy and Marlon were the ones who opened up this fifth location of The Captain’s Boil and they were very passionate about making this location a great success like the other ones.  They had a great menu set up for us which included family style appetizers and sides and we could choose our own seafood boils!  (This was different than the other seafood boil media events we had had thus far where we shared the seafood boil bags.) 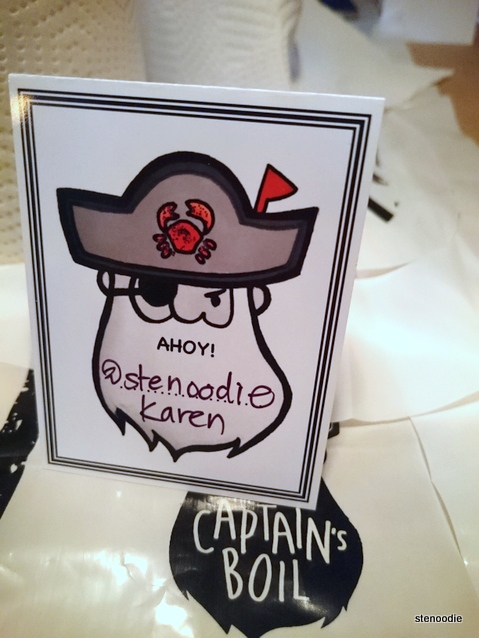 Thanks for a cute name card! 🙂 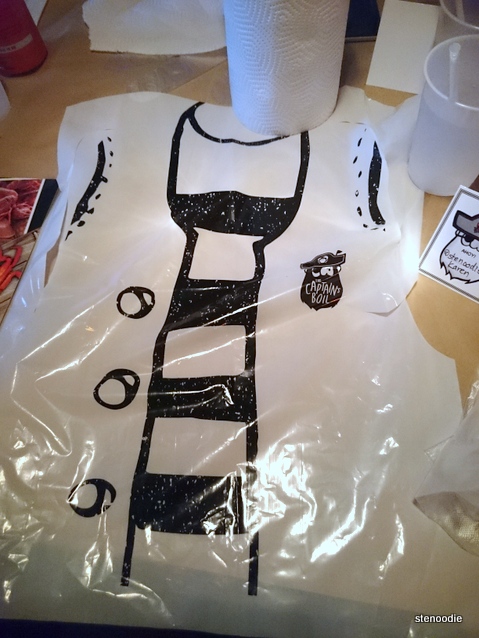 Nautical-themed plastic bib for eating — you will need it! 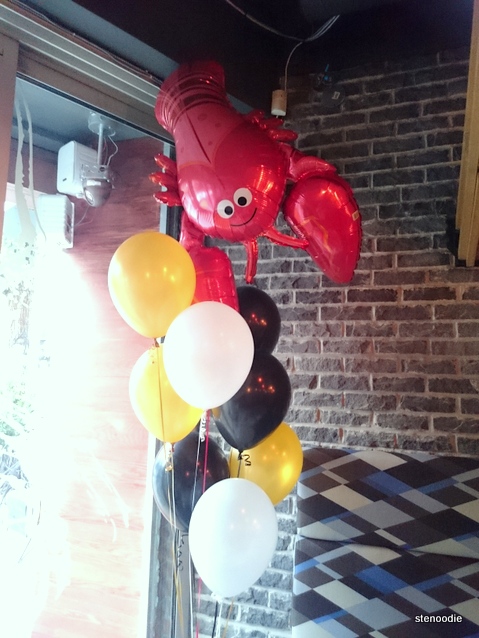 Cute lobster balloon! Who was the artist behind this? 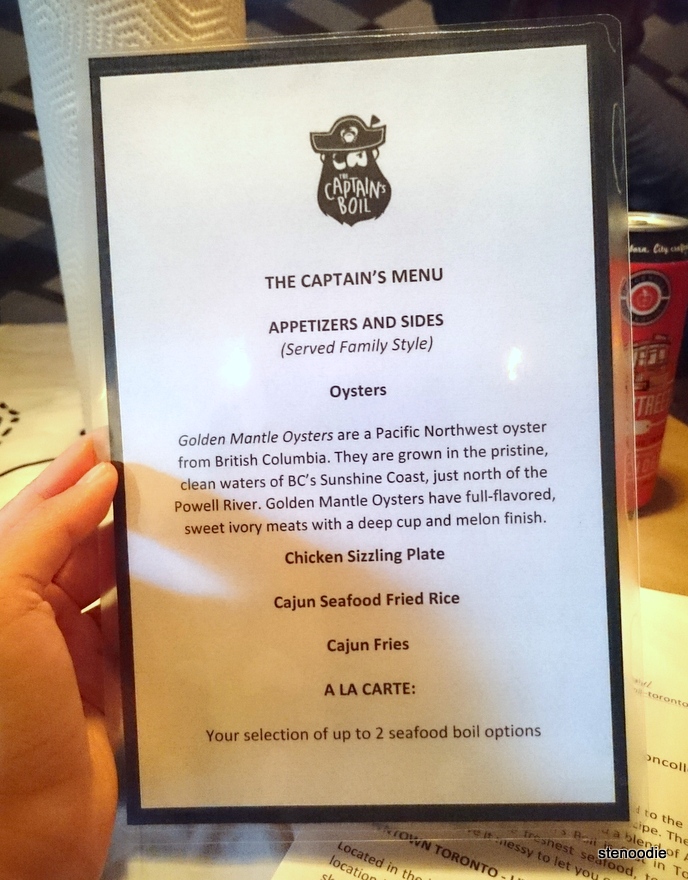 There was a nice display of seafood on a table for us to photograph. 🙂 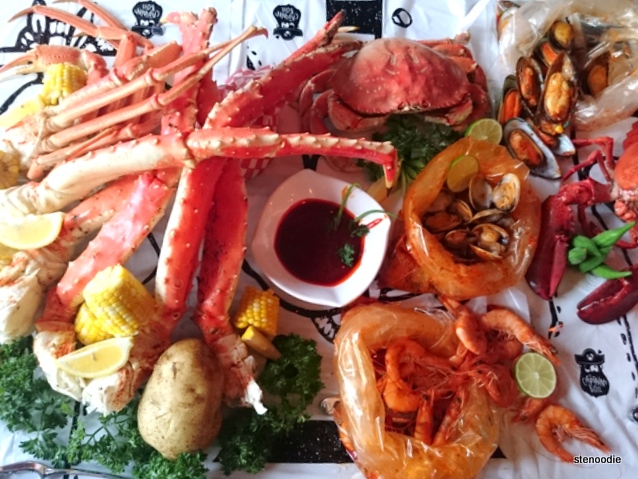 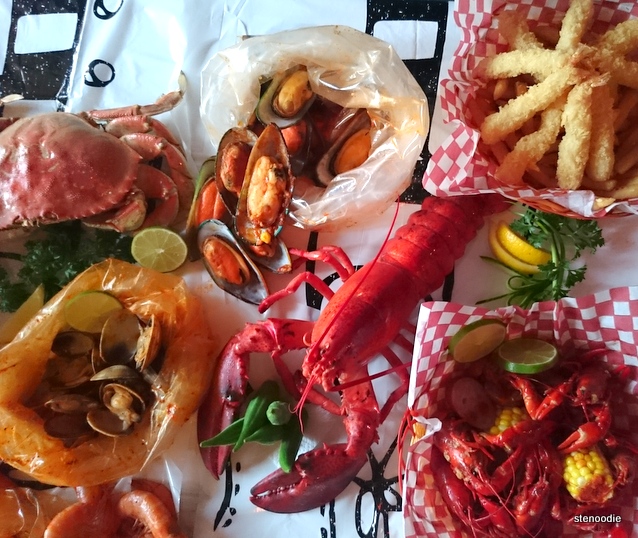 A peek at what our night entailed

There were three feature drinks that night:  Belgian Moon Draft, Brickworks Ciderhouse Queen Street 501, and a Ruffino Lumina Pinot Grigio Wine.  I picked the cider was which “clear pale gold in colour, mildly sweet with flavours of apple, white blossoms, and honey”.  This turned out to be a great drink to go with the seafood as it wasn’t too heavy and had a mild alcohol percentage too. 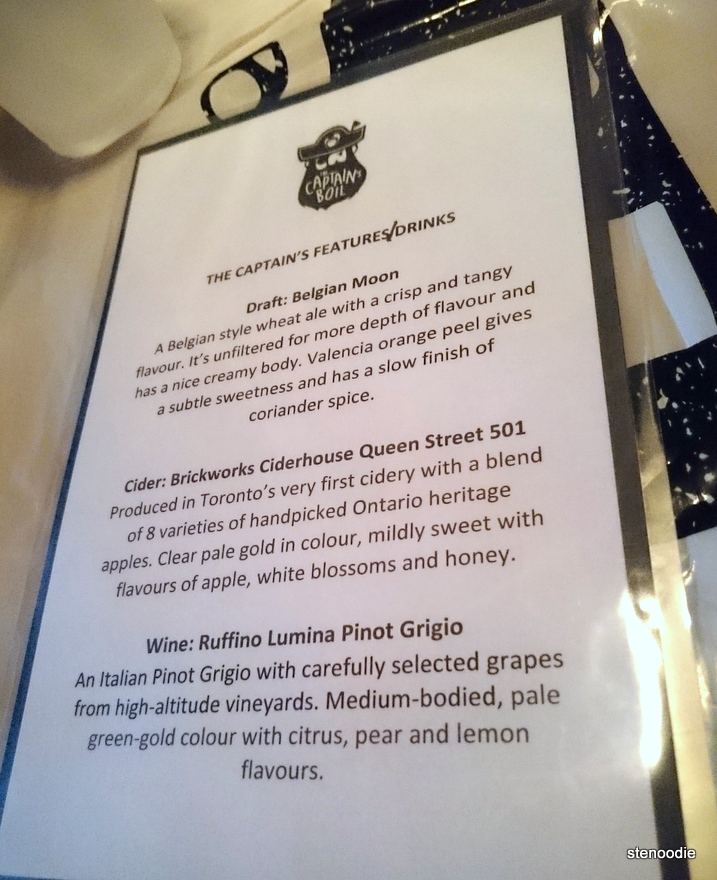 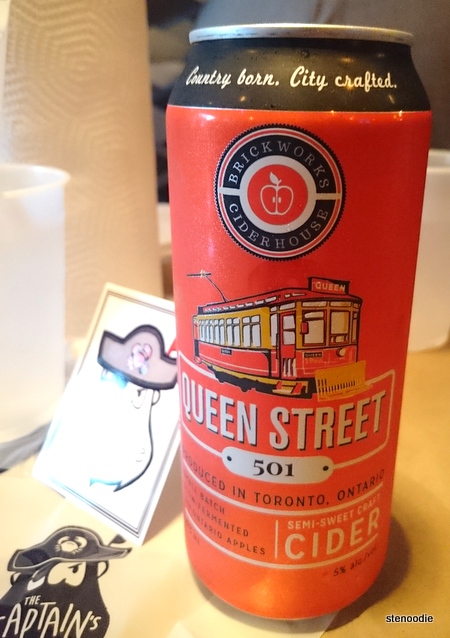 To kick off the night, several live crawfish were brought to the tables for us to take photos with.  I’m a Buddhist so I wasn’t very fond of seeing these little guys wiggling live in front of me but I did take some photos and videos just because. 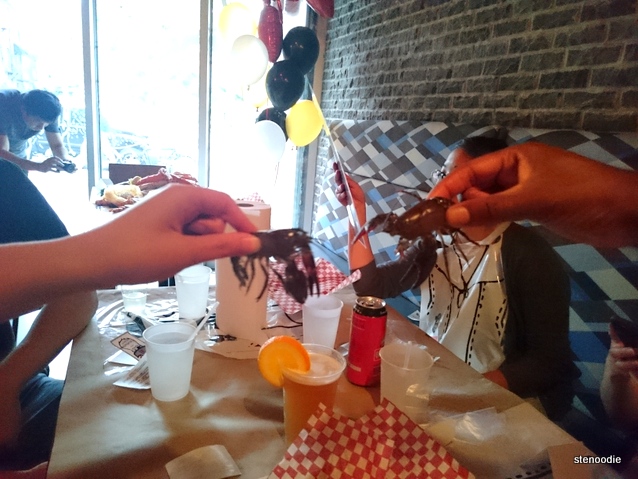 Live crawfish battling it out

One of the servers came around to each table to explain the menu and how we would be choosing two pounds of seafood boil in a bag to enjoy.  We could choose up to two different types of seafood.  I was so excited about this!  Right away, I knew that I wanted to try a pound of crawfish and a pound of snow crab legs.  I asked for the crawfish to be done in the Captain’s Boil sauce with medium heat and the snow crab legs to be done in the Cajun Cajun sauce with a mild heat. 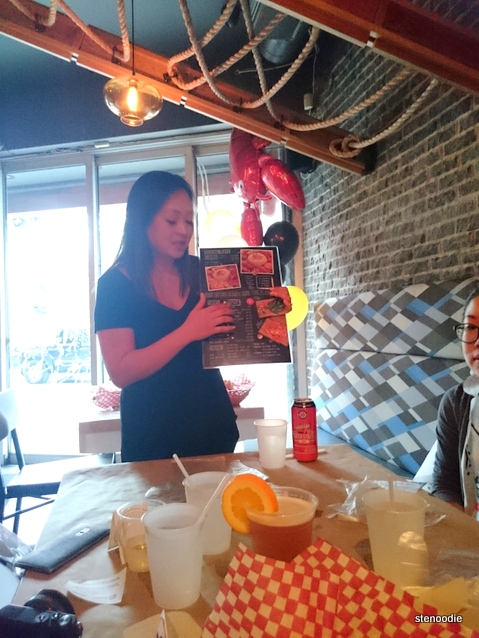 Explaining the menu to us 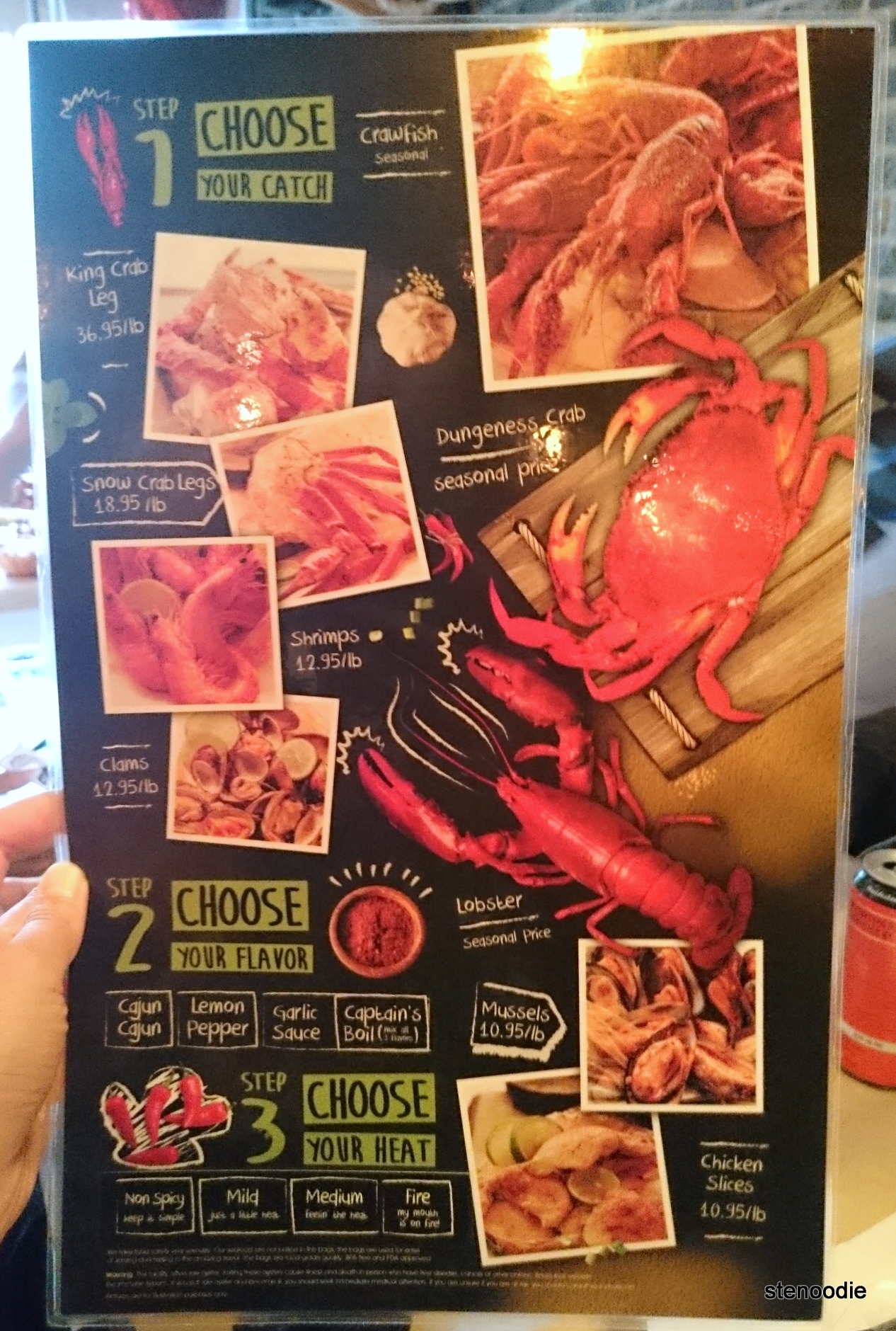 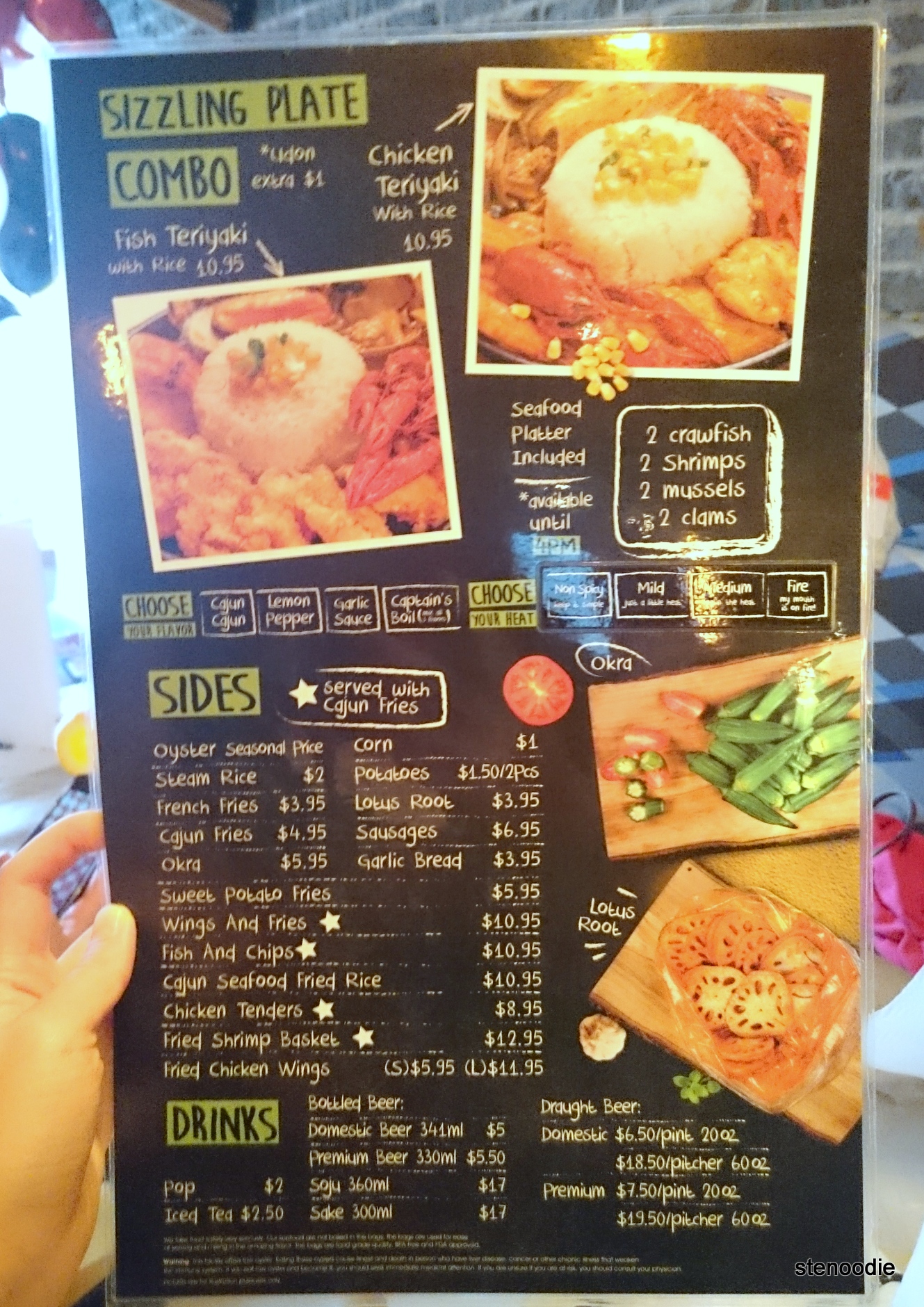 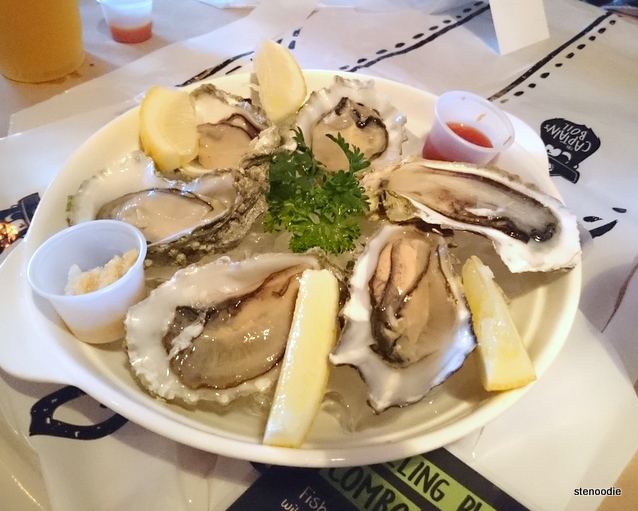 Shortly, dinner was in full swing!  We started off the appetizers with the oysters.  These were Golden Mantle Oysters, a “Pacific Northwest oyster from British Columbia.  They were grown in the pristine, clean waters of BC’s Sunshine Coast, just north of the Powell River.  They are a full-flavoured, sweet ivory meats with a deep cut and melon finish”.

Yum!  I really liked this oyster.  It was big, meaty, plump, and fresh.  How can you ever say no to juicy raw oysters? 😛 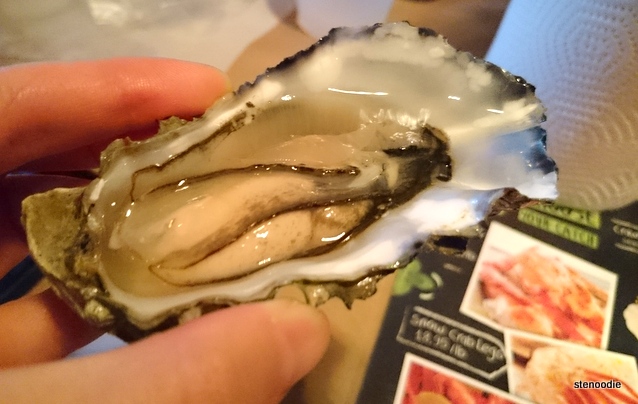 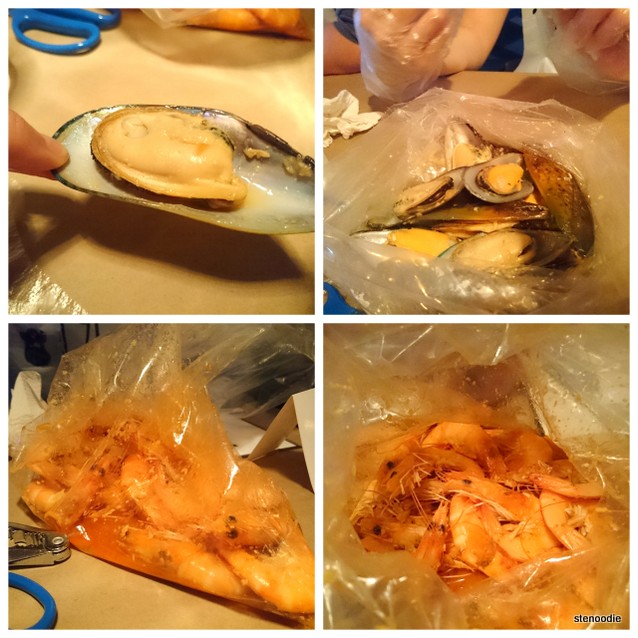 Mussels and shrimp. I didn’t get a chance to take a photo of the other seafood on our table

The bags of seafood slowly started to arrive at our tables.  Our tablemates got an assortment of different seafood like clams, mussels, lobster, crawfish, snow crab legs so we were able to somewhat try out what there were to offer (they also offer king crab and Dungeness crab at the restaurant).  Everything was so delicious!

I was especially content with my seafood that both ended up arriving in Captain Boil’s sauce.  The Captian Boil’s sauce is a mixture of their three other sauces:  Cajun Cajun, Lemon Pepper, and Garlic Sauce.  It was quite spicy too since I had chosen a medium heat.  The crawfish actually were quite large and had a lot of meat in its claws too — normally when you eat crawfish, you just eat the head and body and there is little meat inside the claws. 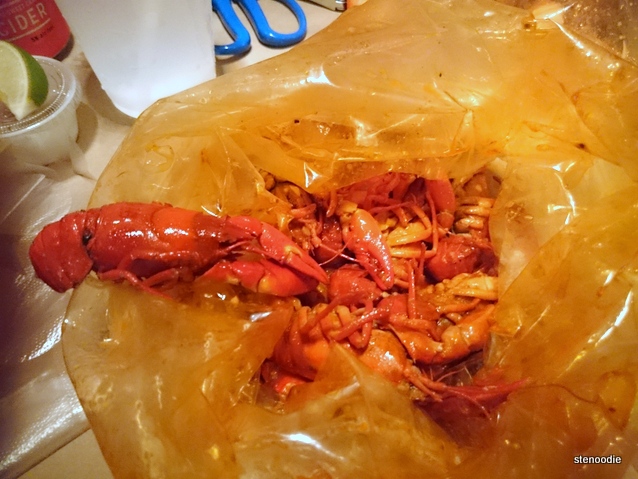 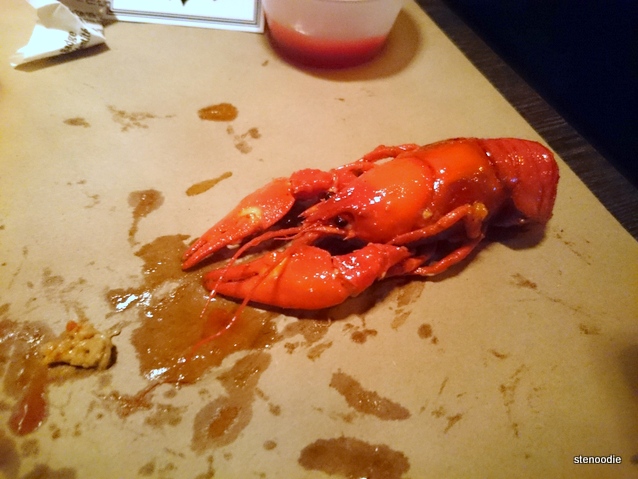 Look at how big this little guy is; there was a lot of meat inside each one

The snow leg crab was gigantic!  This was more than enough for me to enjoy and the meat from the crab leg was firm and dense.  Dipping into the Captian’s Boil sauce made it even more scrumptious. 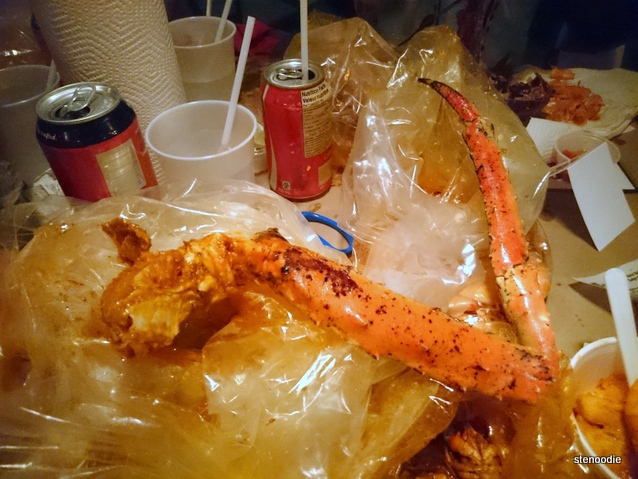 Everything was finger-licking good! 😀

We also shared the Chicken Teriyaki with Rice.  This was an amazing dish that I would order again because not only did it contain chicken teriyaki but there were two crawfish, two shrimps, two mussels, and two clams in every order.  This would be such an amazing dish to enjoy for lunch!  I loved how the chicken was so firm and tender too. 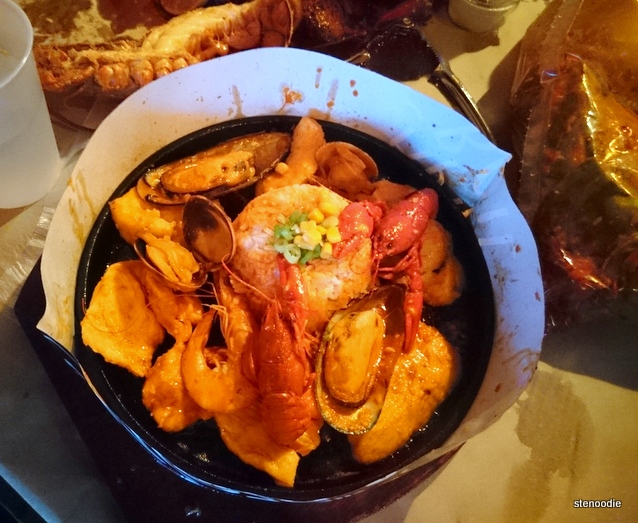 We had an order of the Cajun Seafood Fried Rice as well as their Cajun Fries.  I loved both.  The rice was flavourful (especially when you added some of the Captain’s Boil sauce into it — absolutely amazing) and the fries were crunchy and difficult to put down. 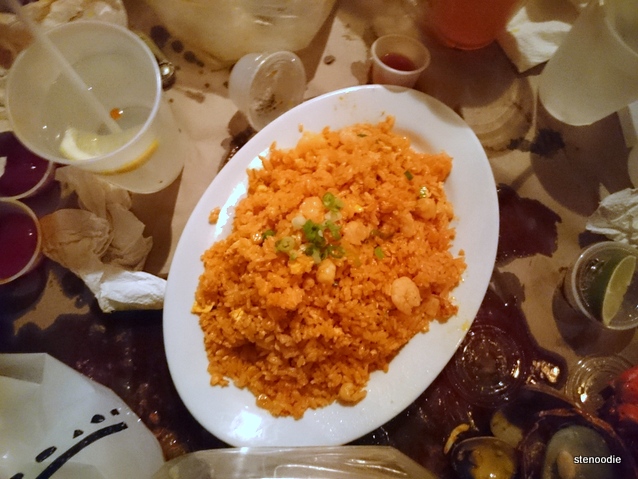 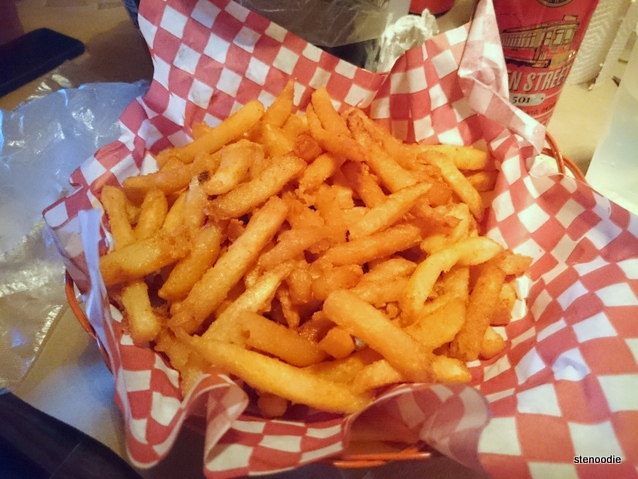 I also tried some okra and sausages from the other bags of seafood that we had on the table too.  I actually didn’t know we were welcome to order those sides to put into our bag as well!  I don’t blame the staff though because they are still new and working out the kinks. 🙂 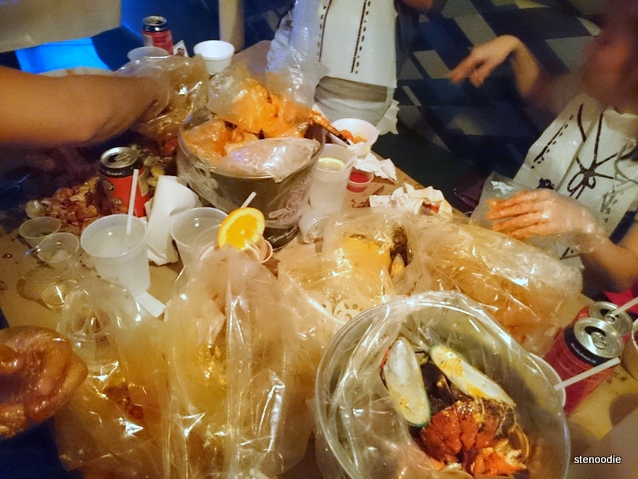 Our table at one point of the night; it might not look appetizing with plastic bags all over the table but trust me, it was an absolute feast!

All in all, it was an absolutely amazing seafood feast at the fifth location of The Captain’s Boil.  I received a $20 gift card to use towards a future visit and I honestly can’t wait to return to redeem it.  I really, really enjoy Captain’s Boil and they are definitely one of my favourite seafood restaurants in the city now. 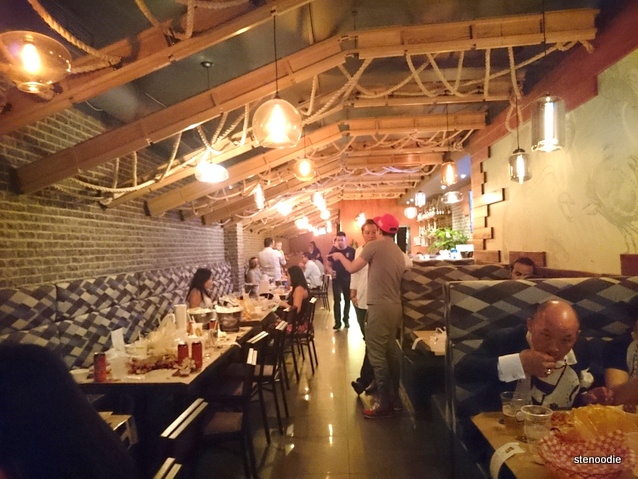 FTC Disclaimer:  Although Mary reached out and invited me to a complimentary tasting to review her family’s restaurant, the opinions expressed here represent my own and not those of the restaurant.