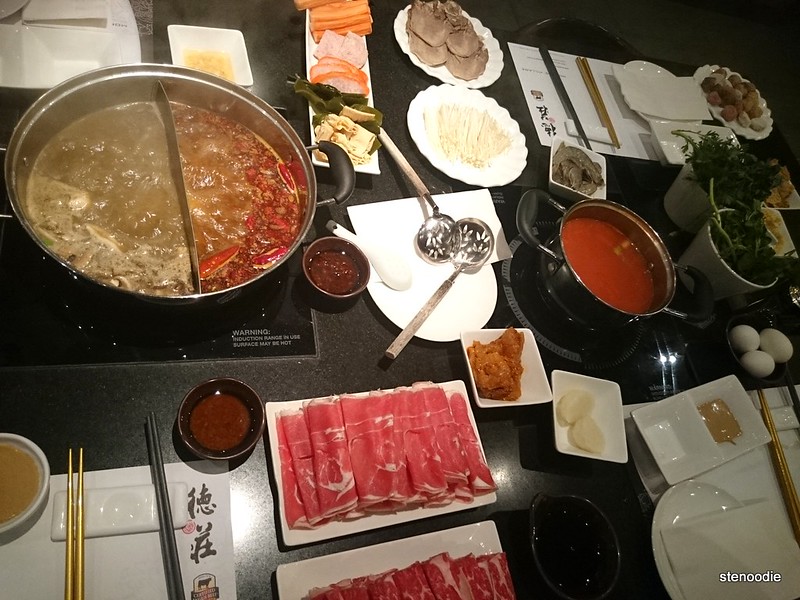 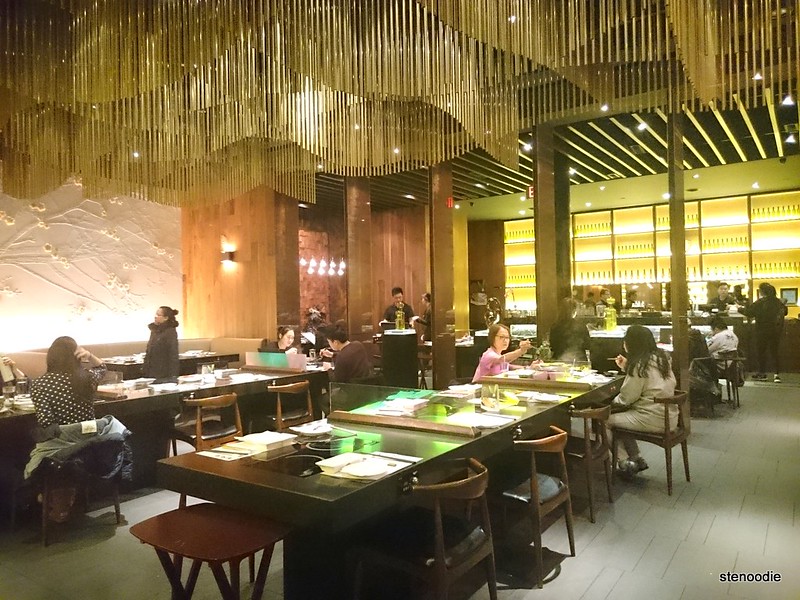 This is one of the nicest hot pot places I’ve been to. The decor is awfully nice

It was my pleasure to be invited for a private media tasting at Morals Village Hot Pot by Zhe of Sweven Media.  I arrived on a Tuesday evening just after 6 p.m. that a cold and rainy night.  Luckily, the weather forecast didn’t bring freezing rain or a severe snowstorm as previously reported but just some light rain.  Still, the damp weather was enough to cause a poorer turnout of customers than usual. 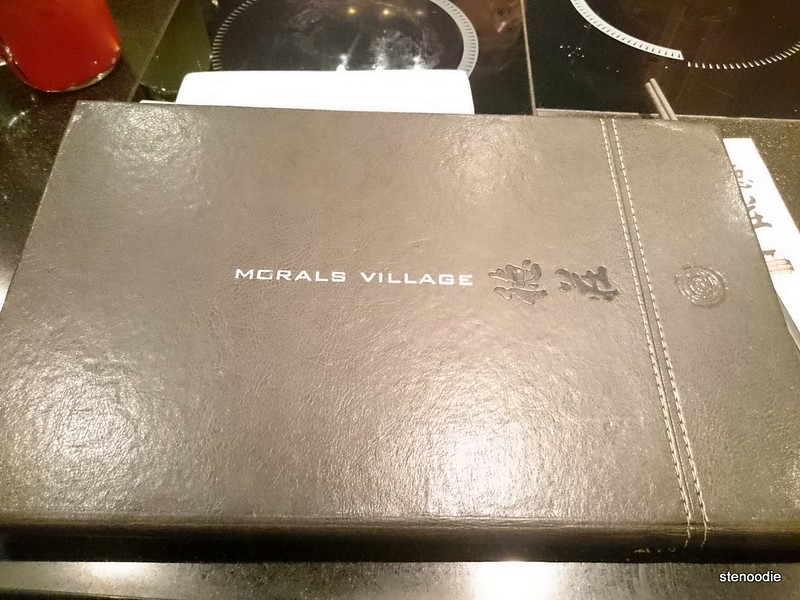 Their menu is available in Chinese and English

Closs of Sweven Media met me for the private tasting — I first met him at the KaKa All You Can Eat private tasting in the summer.  A private tasting meant that I could bring a guest and we dined as if we were regular customers.  All around us, there were many customers enjoying the hot pot experience already.

Just a short run-down of what “hot pot” is:  It’s a culinary experience brought to us by the Chinese many years ago where there is great pleasure taken in boiling a pot of water, having a rich soup base, and dunking raw sliced meat and vegetables into the pot to enjoy around the table with friends and family.  It is a great way to stay warm as the food is always kept hot and why it is especially a popular cuisine to enjoy during the cold winter months.  It’s a do-it-yourself kind of experience that is fun and interactive.  You can eat as much as you want or as little as you want with your own control on what kind of soup base you want and what kind of sauces you want to dip the food in, if at all.  Nowadays, the electric or butane gas standalone cooking stoves are used for convenience. 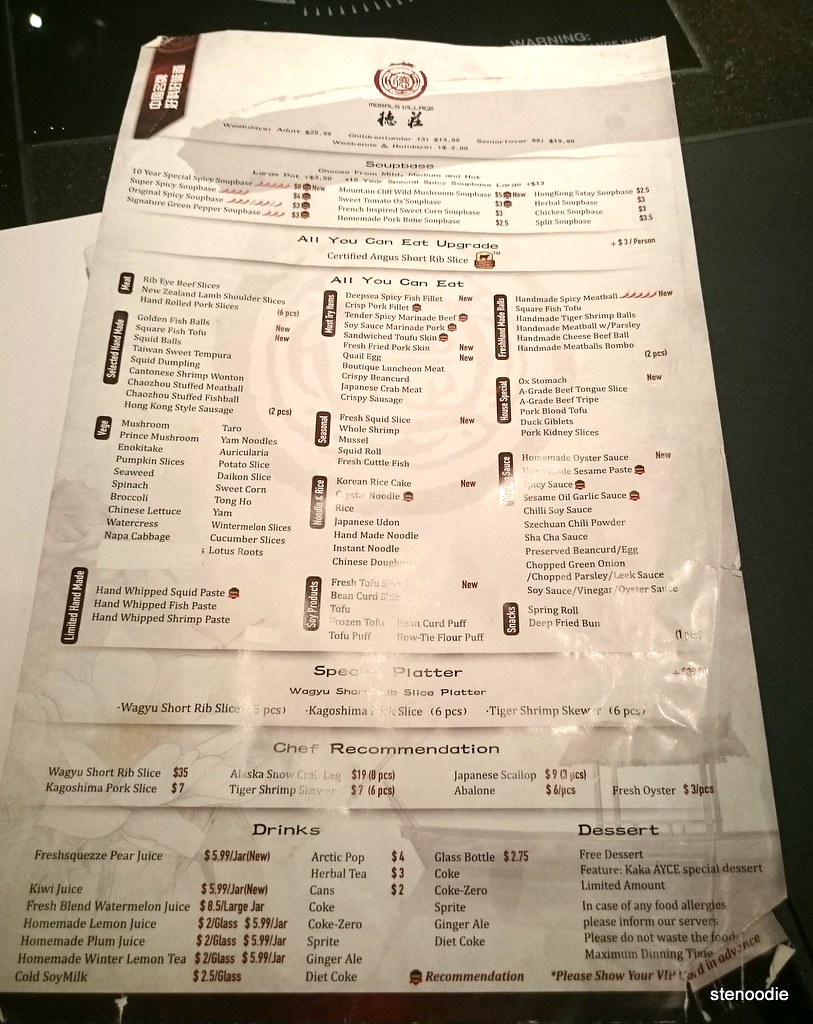 All You Can Eat Hot Pot menu

Morals Village Hot Pot provides a $26.99 per person charge during the weekdays and $2 extra added for the busy weekend.  Closs informed me that they usually have long line-ups for dinner but the damp weather definitely took a turn on the usual customer base.  I was really excited to try out Morals Village Pot Hot.  I had heard about it for months from other friends and fellow food bloggers but just hadn’t had the chance to try it.  The mere chance that I was invited for this private media tasting seeing that I had been wanting to come for months was a sheer pleasure. 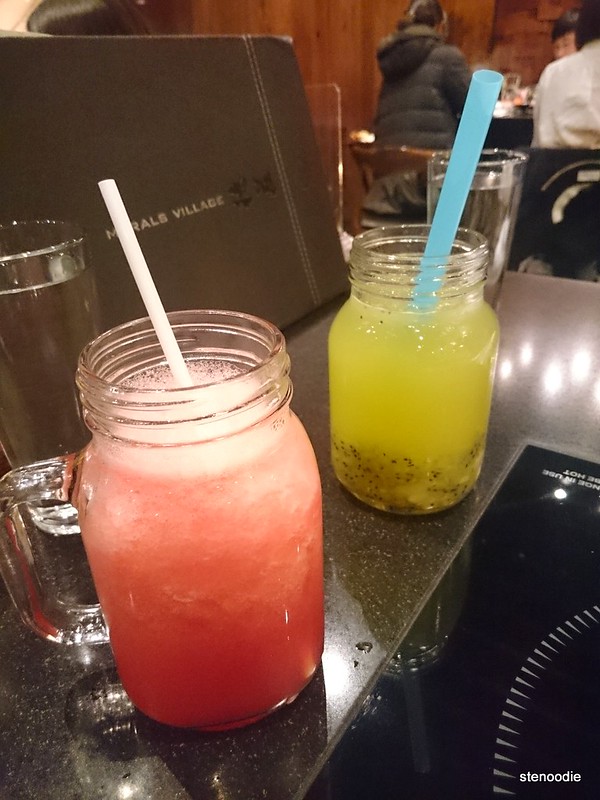 Upon sitting down at the table, we ordered drinks and the soup base for the pots.  Closs provided some great recommendations seeing as he had visited this restaurant many times.  We chose the watermelon juice and kiwi juice.

These drinks came in a mason jar with straws and were a great size.  The watermelon juice was kept ice-cold and very refreshing.  We were told that the drinks were freshly squeezed and made to order.  The kiwi juice was surprisingly sweet and very delicious!  I had expected the kiwi juice to be a still sour, but it was very delicious.  There were some jello pieces at the bottom of the kiwi drink too.

Eleven different types of soup bases to choose from!

For the soup base, we chose the Original Spicy Soup Base (with three chillies), Mountain Cliff Wild Mushroom Super Base, Sweet Tomato Ox Soup Base, and Signature Green Pepper Soup Base.  We got the split pots which meant we could have two soup bases in one pot. 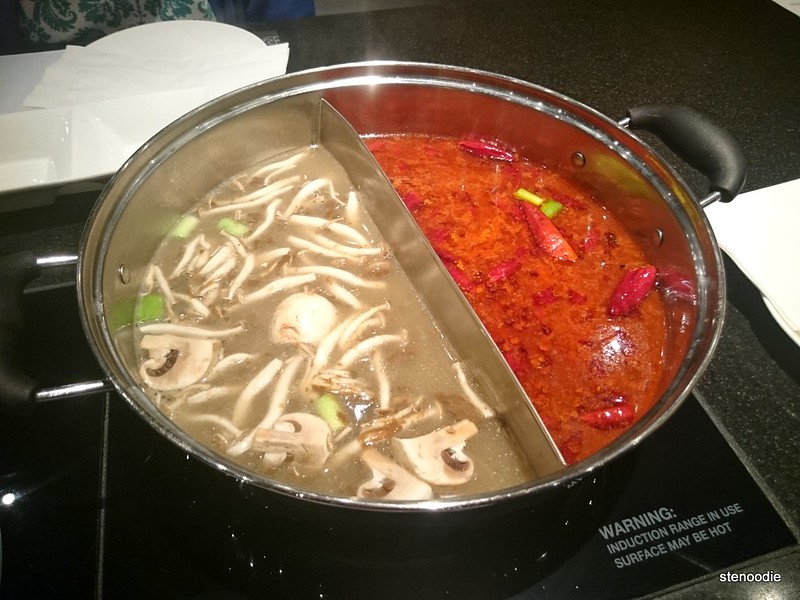 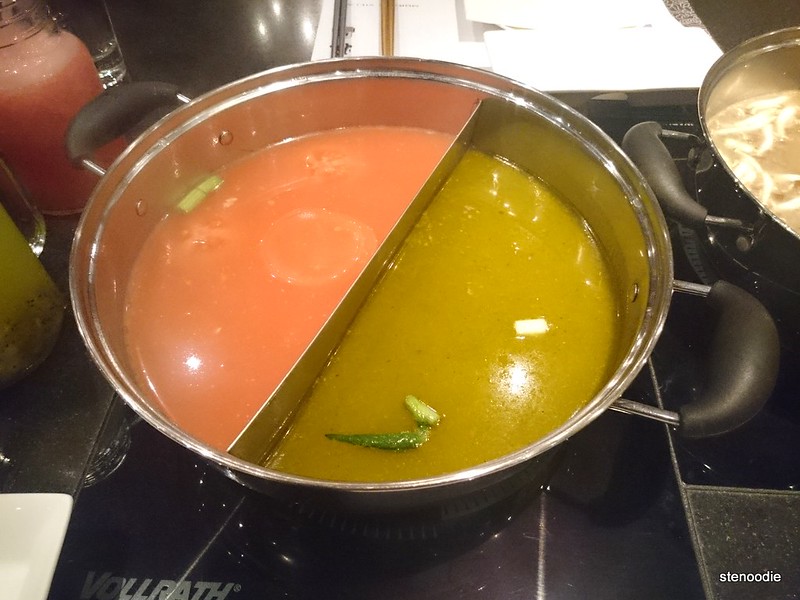 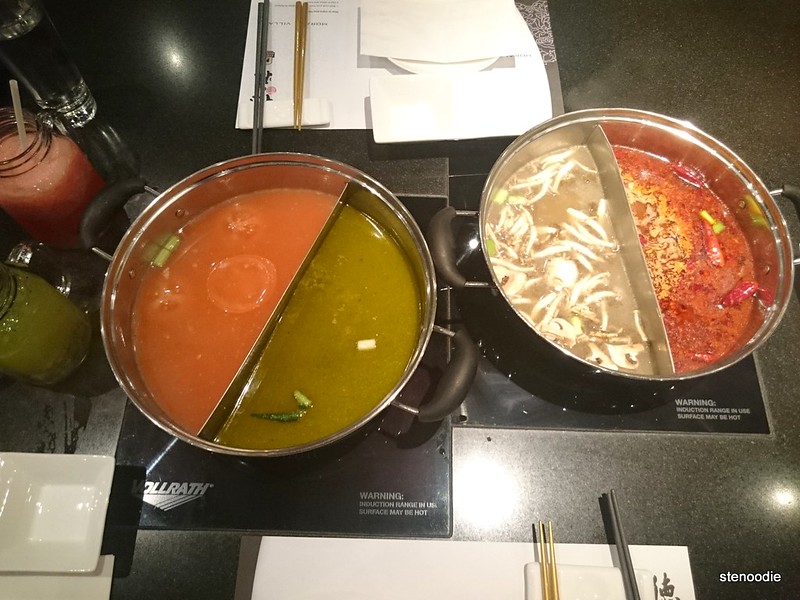 It didn’t take long for the pots of water to boil and each person has their own dial near the edge of the table in which to adjust the temperature of the stove.

Once it started boiling, it smelled absolutely amazing

Closs started off the tasting by ordering a selection of raw meats like lamb and certified angus beef, an assortment of beef and fish balls, crab meat, spam, enoki mushrooms, veggies, as well as the toppings for the sauce to mix. 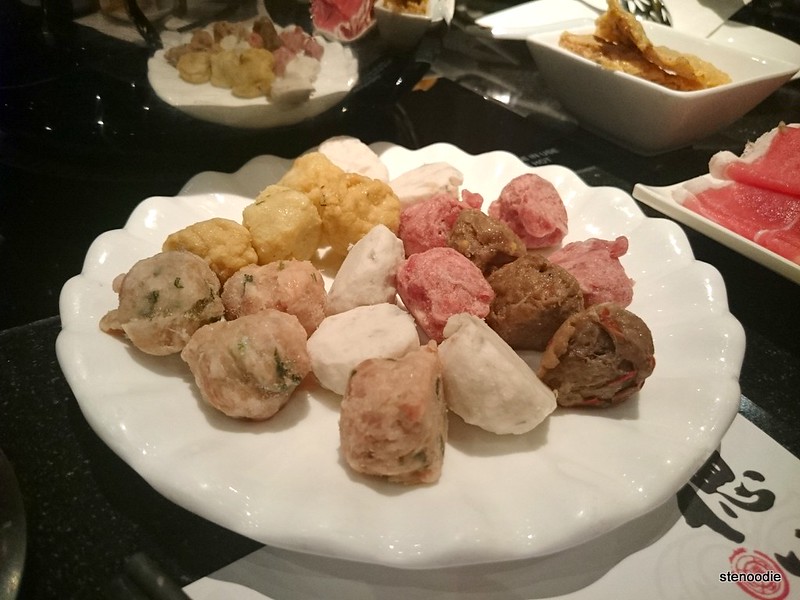 Various beef and fish and mixed balls. I liked the size of these; not too big so that you could try a lot 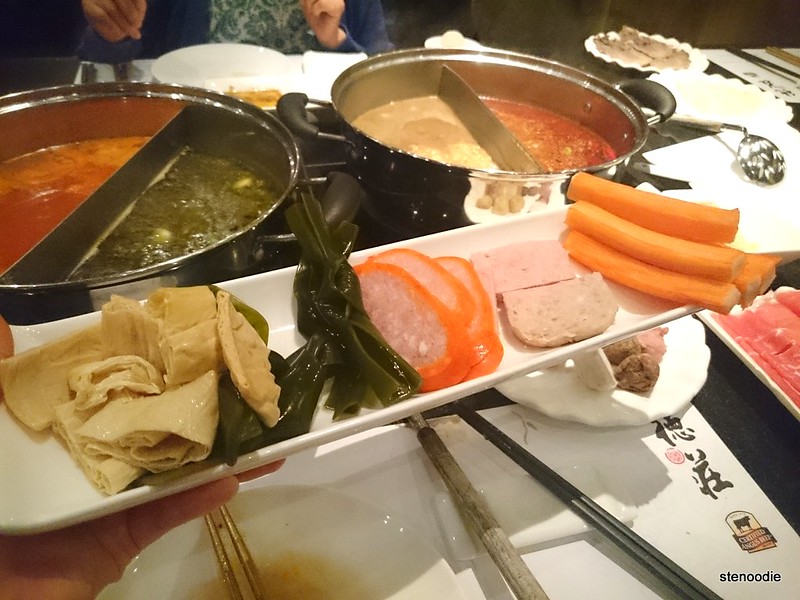 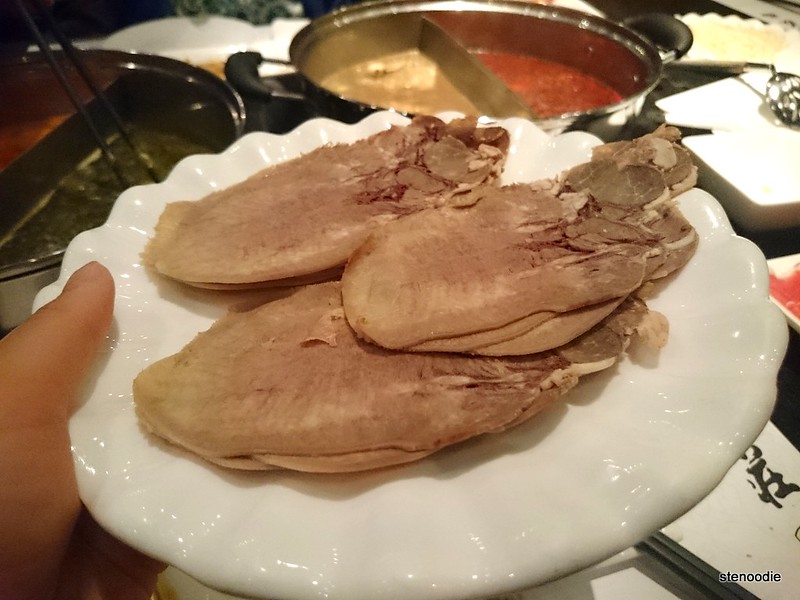 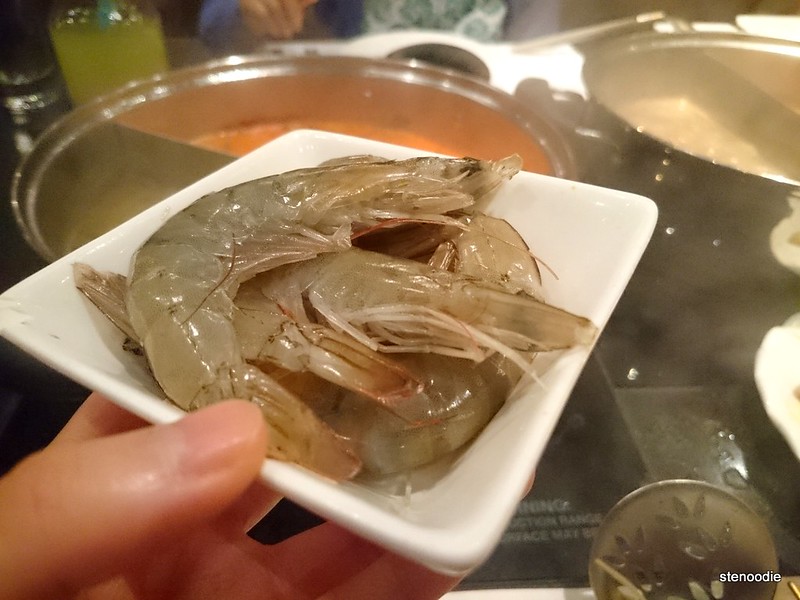 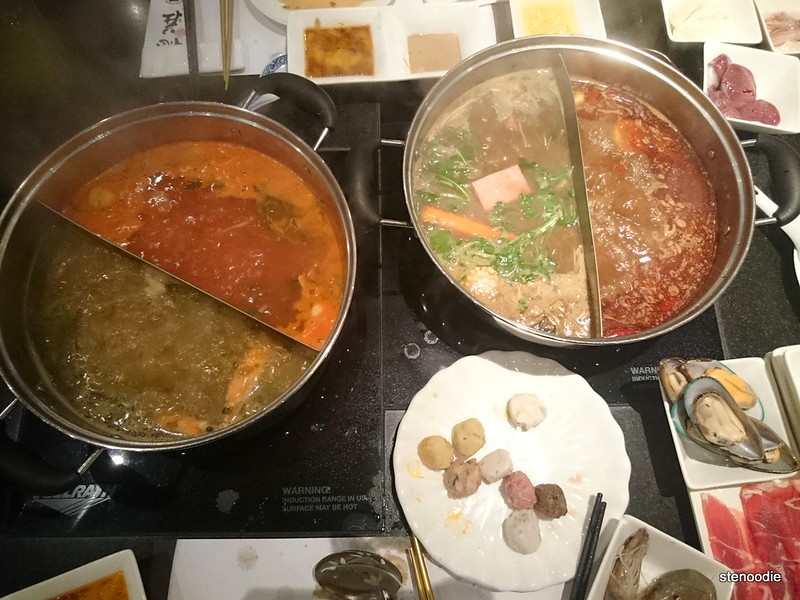 We actually didn’t have to rely on the mixture of sauces for flavour because the soup base already had enough flavour! 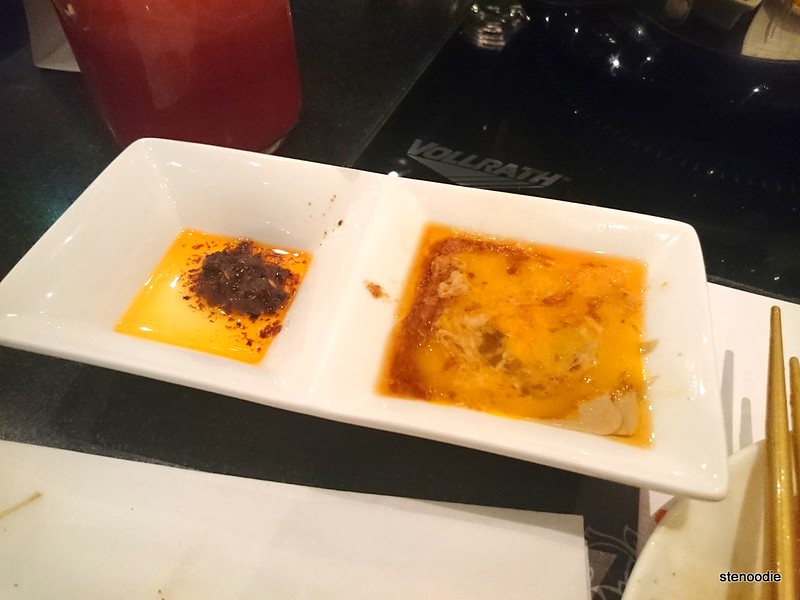 My favourite part of this hot pot experience was the distinct flavour and tastes of the soup base.  The soup base at Morals Village Hot Pot definitely were of a higher caliber than other hot pot restaurants.  They import their ingredients for the soup base directly from Chongqing, China!  No wonder the taste and flavouring was so strong and unique. 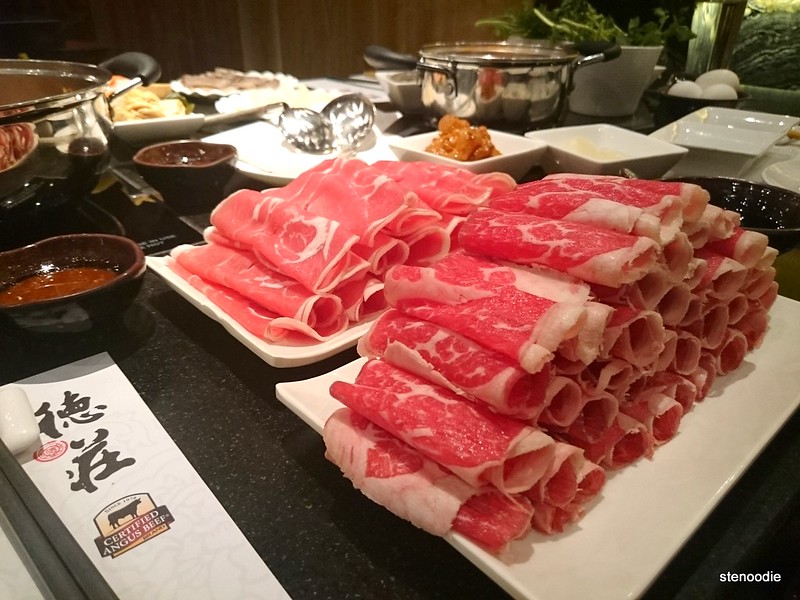 Look at all that fresh lamb and beef slices!

I really enjoyed the sliced lamb and beef as well since it was very fresh and sliced so thinly.  Closs said that they specifically use a machine to slice their meat so that it is very thin.

I also enjoyed the squid items — squid dumpling, fresh squid paste, and actual squid.  It was delight to eat a great selection of what they offered on their menu.  Even though I wanted to try a little bit of everything on the menu, it was physically impossible.  There was so much variety that someone would have to have a bottomless stomach in order to try one of everything on the menu! XD

They also had mini deep fried buns with sweet milk.  These were great! 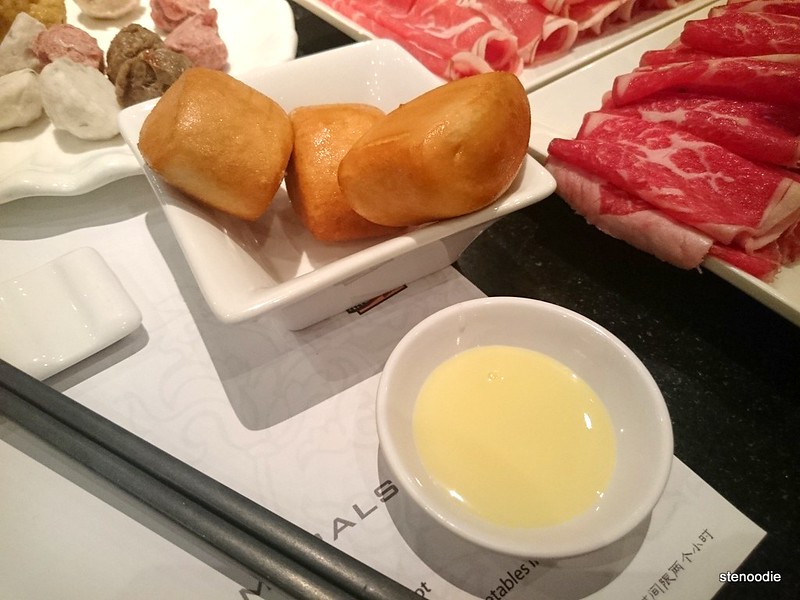 The servers were very attentive and came around often to inquire if we needed anything else and helped us to refill the pots with more soup when they were running low.  Closs was also a great host that night and helped us to order food and keep us company while we indulged in the food. 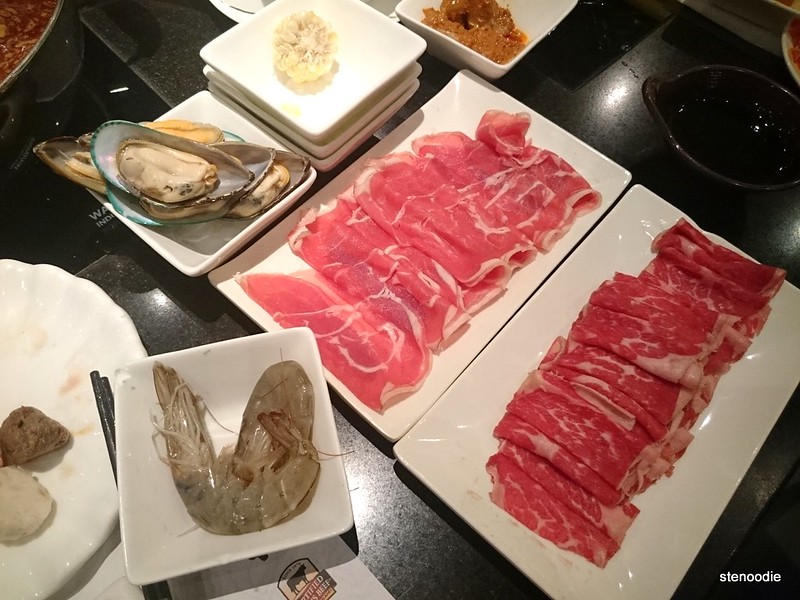 These were big stacks of meat! 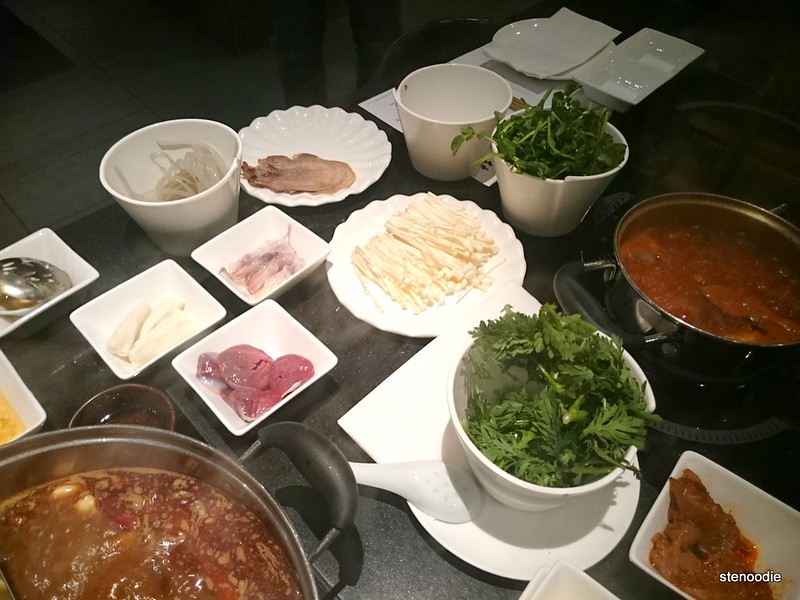 Lots of variety in small containers 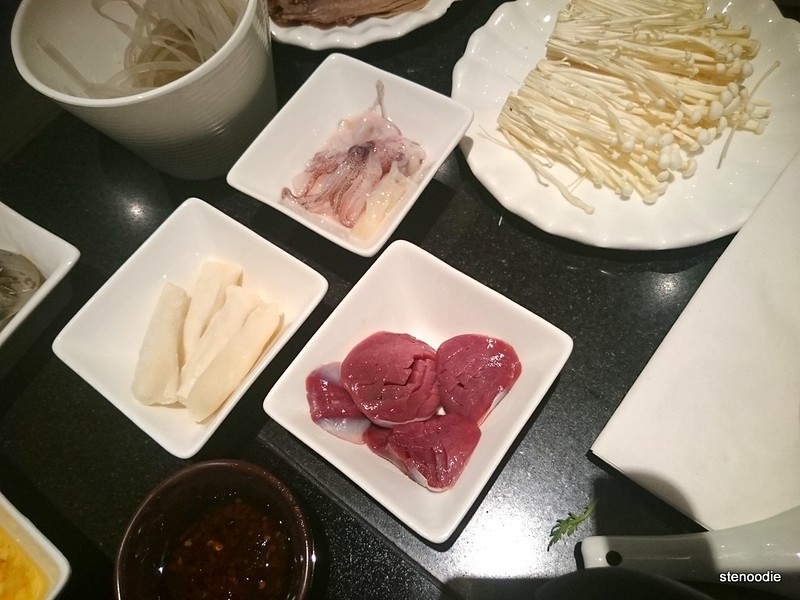 The squid dumplings were so unique! The duck giblets were a bit flavourless and hard to chew. The fresh squid were so bouncy and fresh! 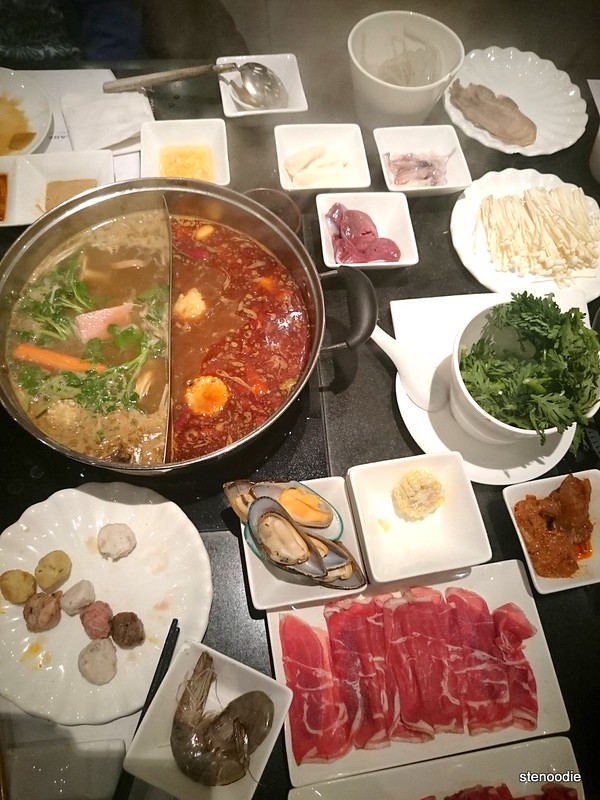 I could have eaten more if we sat for even longer… 🙂 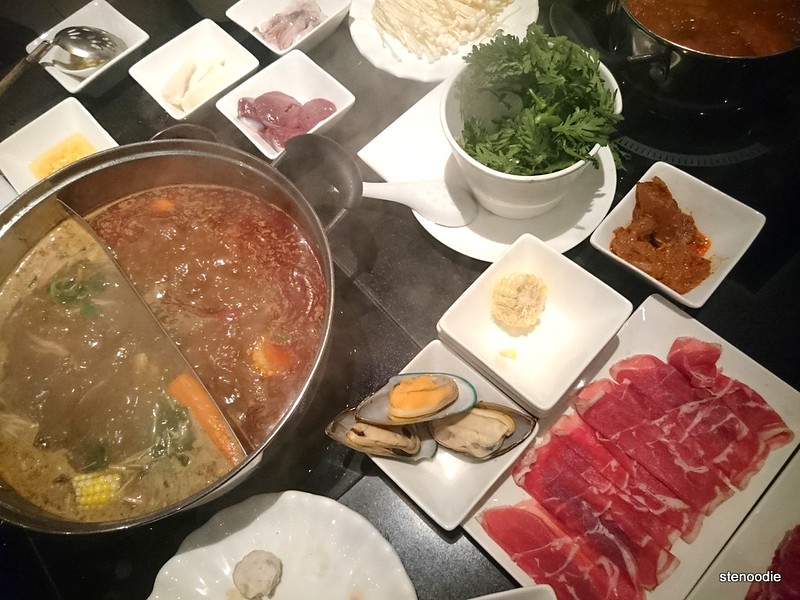 Great place to eat and chat 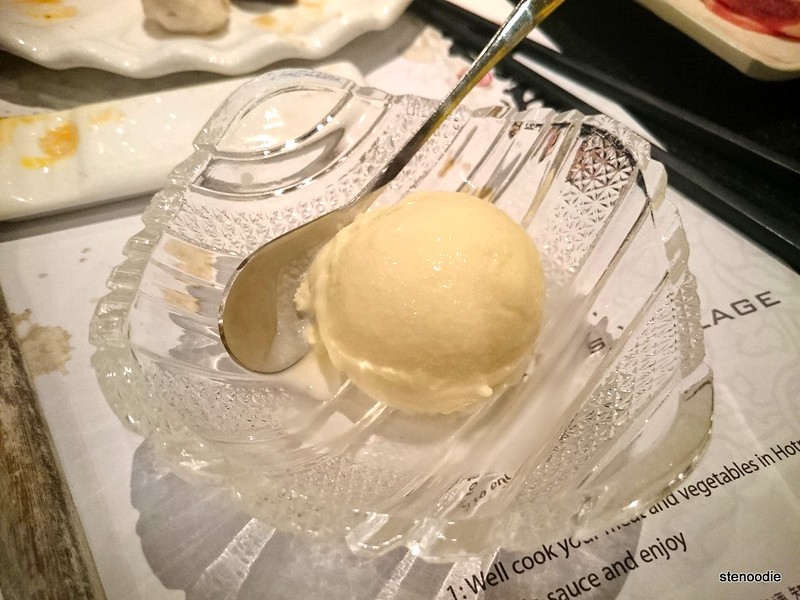 Vanilla ice cream (this was the only flavour available that night)

Towards the end of dinner, I was extremely full.  We finished off with a small helping of vanilla ice cream that tasted like soft serve since it was so soft and melty.  It was a nice finish to the meal.

I now know why Morals Village Hot Pot is such a popular hot pot restaurant chain.  Their ingredients are high quality and their soup base are superior to what is out there on the market.  If nothing else, you have to try their recommended soup bases (and also their fruit juice)!  I really applaud the rich soup bases.  They were so delicious that I barely touched my dipping sauces. 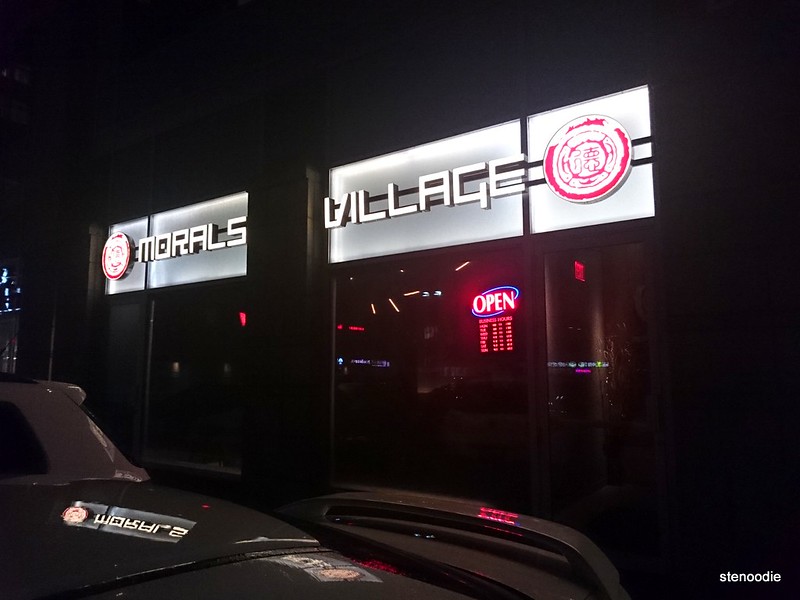 This is located right next to ZenQ

The price for one adult is a little pricier than most hot pot places, but I wouldn’t mind returning again to try out more of their menu selections.  The quality is there!  The soup bases of course are worth indulging in again and again too.

Have you been to Morals Village Hot Pot before?  What was your experience like?

FTC Disclaimer:  Although Morals Village reached out and invited me to a complimentary tasting to review their restaurant, the opinions expressed here represent my own and not those of the restaurant.