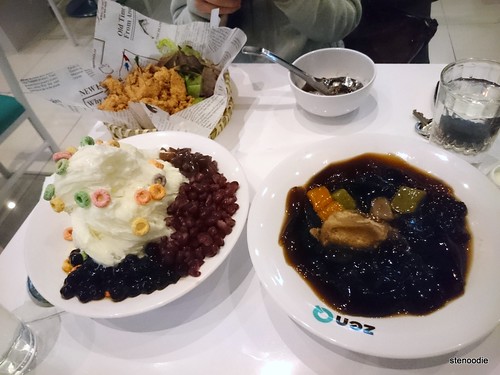 Located at 8333 Kennedy Rd in Markham

Despite word-of-mouth, social media, and other high-tech ways to advertise, apparently old school snail mail still works!  When I received a postcard-sized flyer about the opening of a new Asian dessert shop in Markham, I was intrigued by the clean design and concept of ZenQ.  What are Q balls?  What kind of dessert do they serve?  The pictures that they provided on the small ad were also enticing.  Since then, I’ve been wanting to try out ZenQ.

ZenQ is a popular dessert and snack shop that originates from Taiwan and already has several franchises worldwide.  This Canadian shop resides beside the new Cha Me Cha at the T&T supermarket plaza at Highway 7 & Kennedy.  They also have locations around the world, with its flagship starting in Taiwan.  Upon walking in on a Tuesday night, I immediately liked the feel of the place.  The chairs and booths were in a white and turquiose color scheme while everything was very clean and minimalistic.  On our visit, I also liked the music selection that they played — popular top 40s. 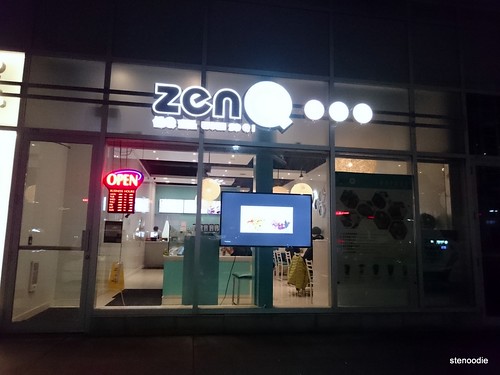 Despite after 9 at night, there were a considerable number of people here for dessert and late night food

Tracy and I chose two desserts and one snack to share.  It was more than enough for us on this rainy night and also a great chance to catch up and chat over shared food.

Of course, I had to order the Grass Jelly with Q balls (pearls, grass jelly ice).  We only chose items that had the “Q” sign next to it on the menu meaning that it was a popular choice. I also wanted to try their Salty Crispy Chicken; it’s a Taiwanese classic!  I need to see how they made it and how it fares with the other restaurants (so far, Papa Chang‘s has the best fried chicken in my books).  Tracy chose the Red Bean Milk Shaved Ice.  I’ve had shaved ice at the North York location of Cha Me Cha and loved it.  I wanted to see how their shaved ice would fare. 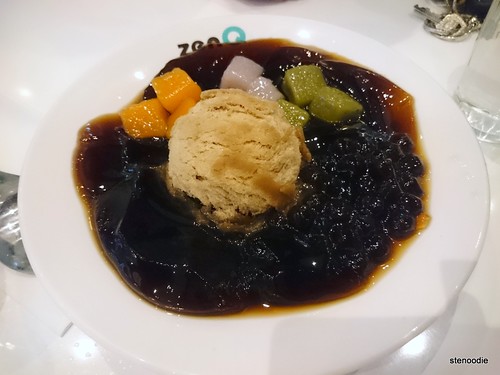 Our orders arrived quickly (no need to use much of their high-speed free wifi here!).  The Grass Jelly with Q Balls was a splatter of relatively colourful items!  I love grass jelly.  The Q balls turned out to look like more little cubes rather than balls and there were three flavors: matcha, taro, and sweet potato.  There were also tapioca pearls on the side.  It came with a small pitcher of milk to add in to the mix.

The grass jelly was good!  It was bland yet refreshing, just the way that grass jelly is supposed to be.  The Q balls were chewy and substantial in your mouth.  I liked the sweet potato flavor the best, followed by the taro, and matcha.  Even though I am not a huge fan of sweet potato regularly, I liked the sweetness in this.  What I absolutely loved the most though were the tapioca pearls.  Omg, they were SO chewy and smooth and perfect!  I haven’t had tapioca in a long time and part of the reason why is that they’re usually hard and unsatisfying.  These tapioca pearls were ridiculously chewy and so delicious!  I was so impressed. 😀 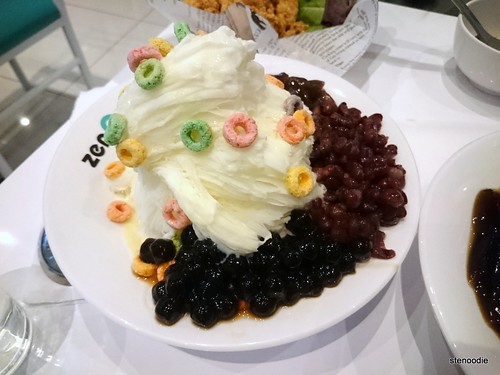 Next up, the Red Bean Milk Shaved Ice arrived as a shock.  I didn’t expect it to look so juvenile (not in a bad way).  The shaved ice was covered with fruit loops!  It was so cute and colorful.  There were also tapioca pearls on the side as well as more grass jelly strips.  The shaved ice didn’t taste like much — maybe because it was made of milk instead of the other option of yogurt?  Either way, the shaved ice wasn’t very good — I liked the one that Cha Me Cha much better (that one was shaved ice cream that was creamy and delicious).  This shaved ice wasn’t good and the layers of ice were all melted into each other. 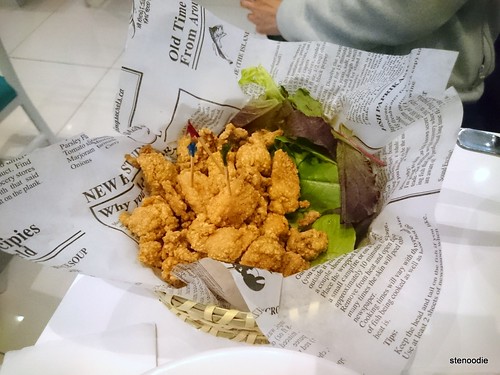 Lastly, the Salty Crispy Chicken was pretty good!  It came with a basket with wax paper akin to the ones that are served with fish and chips and had a substantial amount of chicken in it!  Sometimes, you order a side of these and you find that you finish it very quickly because there are just not enough.  There were more than enough for us to share and the chicken bites were also very meaty and not just a fried crisp.  The seasoning could have been a bit stronger for my taste buds though.

All in all, this was an impressive dessert and snack shop.  I would definitely come again and try more of their other creations.  They also serve rice and noodles as well as bubble tea. 🙂

6 Responses to Desserts & Snacks at ZenQ!