Posted on September 3, 2016 by stenoodie 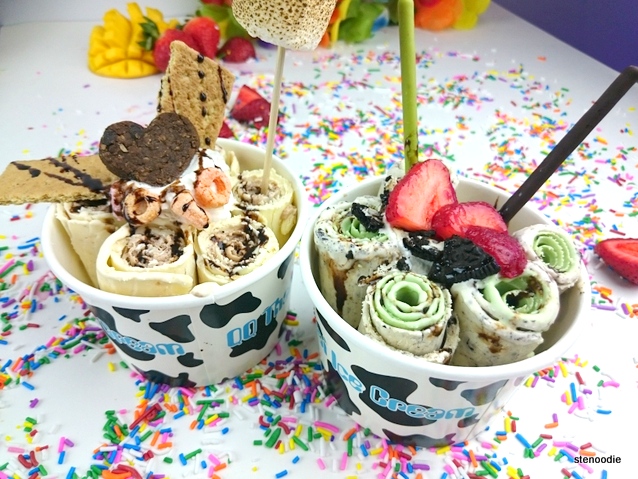 There is a brand new Thai ice cream rolls shop in Scarborough called QQ Thai Ice Cream!  This past Wednesday, Sweven Media held a preview media event for some local foodies to allow us to try their ice cream rolls and so I had the pleasure to try them out.

QQ Thai Ice Cream is located at 3278 Midland Ave. at Unit D117 near Midland and Finch Avenue in Scarborough.  (It might be a little hard to miss the entrance into the street and plaza where a lot of restaurants and shops are but if you are driving south from Steeles on Midland, turn right before you hit Finch.) 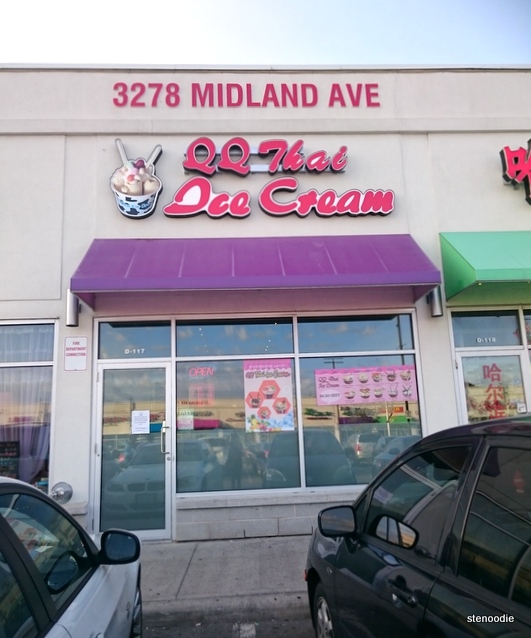 Look for the purple!

I’ve tried a couple of other Thai ice cream rolls now and I have to say that this was one of the best tasting Thai ice cream rolls I’ve ever had!  The flavour was rich, it was made with real fruit, and it was unique in that if you chose two flavours, they could actually be mixed together into one roll.  They also finished each cup with an assortment of fruits, cookies, fruit loops, or Pocky sticks according to which flavour(s) you ordered. 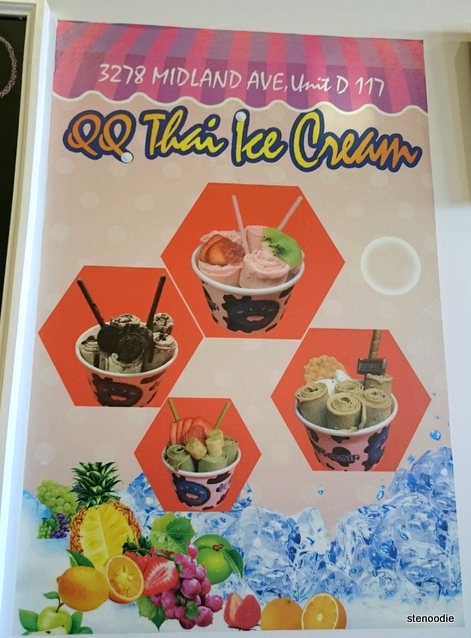 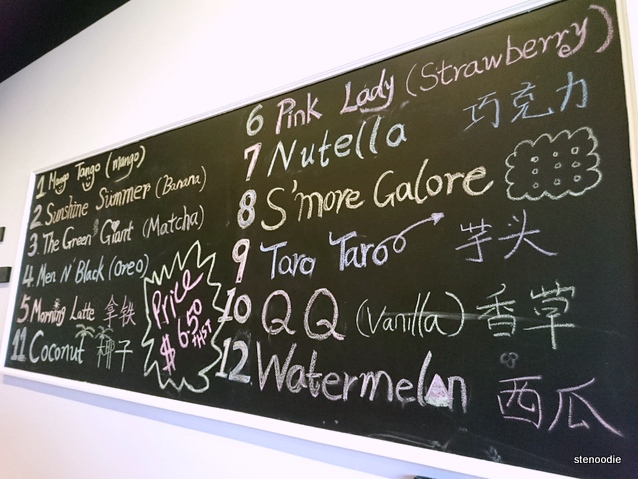 Daphne and I arrived at QQ Thai Ice Cream at 7 p.m. and we were one of the first to be able to try a full sample of the items.  I chose “The Green Giant” (matcha) mixed with “Men N Black” (Oreo) while Daphne chose the “Nutella” mixed with “S’more Galore”. 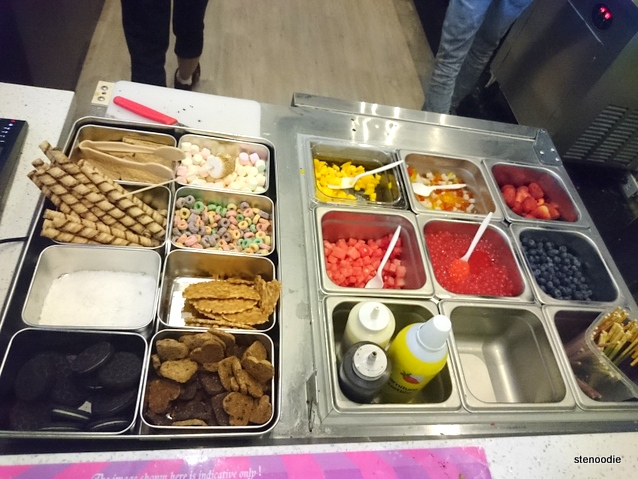 As always, it was fun watching these Thai ice cream rolls being made on the cold plate in front of us.  It was actually Daphne’s first time trying these so she was very impressed and fascinated with the process. 🙂 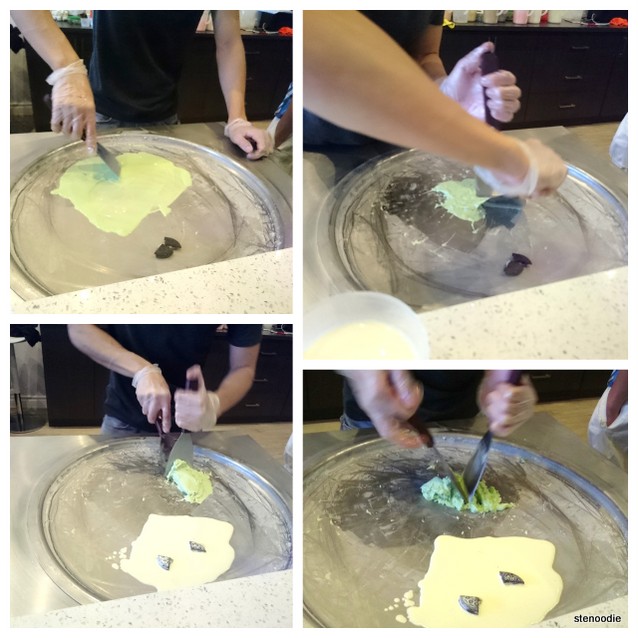 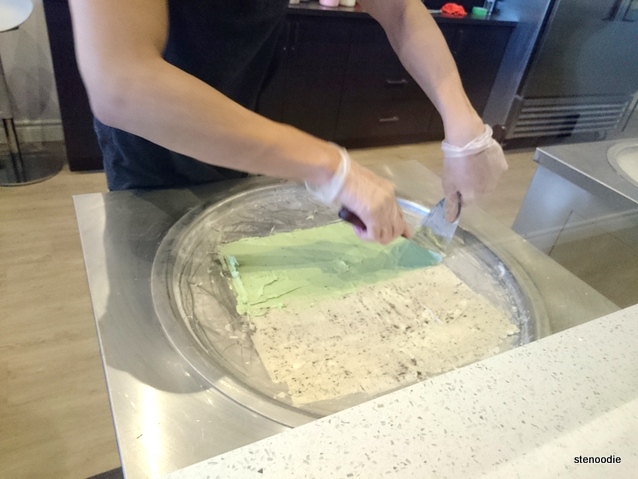 Flattening it against the cold plate 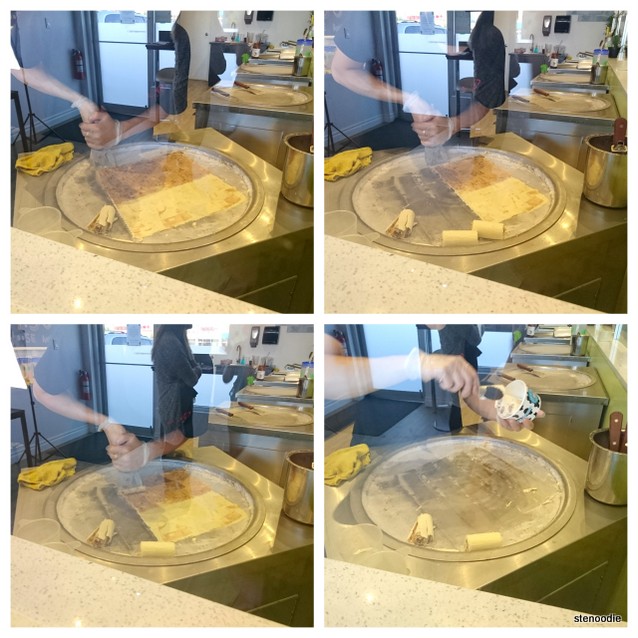 Rolling each one up

When trying out the creations once they were done, I really applauded how rich and dense the ice cream rolls were.  It was a very strong Oreo flavour as well as matcha and it were the most well done ice cream rolls I’ve had thus far.  Well done!  Each roll was made perfectly and stayed in place (some ice cream roll places don’t have cold enough plates so the rolls fall apart easily). 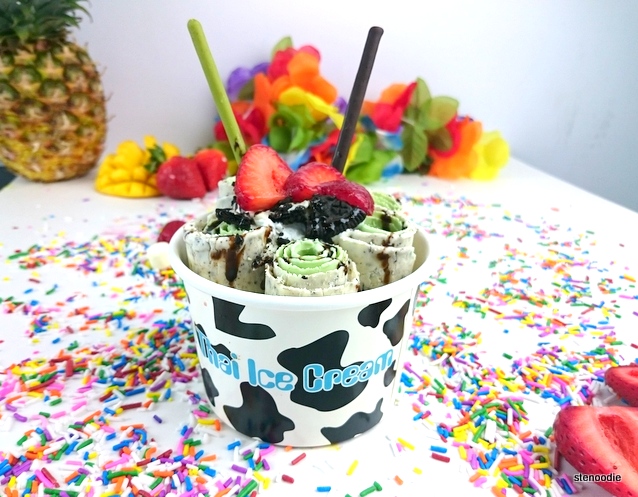 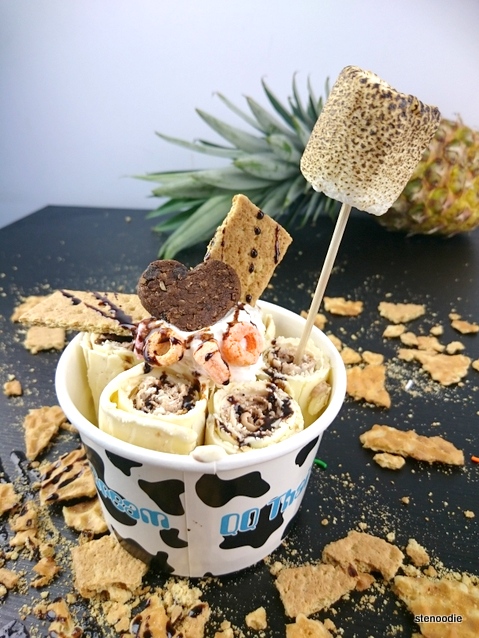 After we enjoyed our ice cream rolls and swapping flavours (by first taking some photos under the “photobooth” area), we enjoyed the rest of the evening by chatting and trying out samples that were being circulated by Yvonne.  Thanks Yvonne for serving us the samples!  I really enjoyed the individual ice cream roll flavours by themselves since they were full of flavour and really good ice cream.  They serve 12 flavours currently and the ones that left an impression on me were the Morning Latte, Coconut, and Taro Taro (the matcha, Oreo, S’more were great too).

Thanks again Yvonne and Sweven Media for inviting me and my friend to try out the Thai ice cream rolls from QQ Thai Ice Cream! 🙂 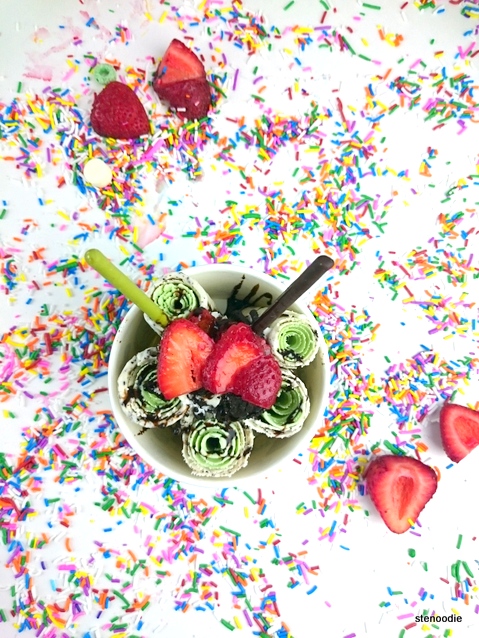 Gorgeous photoshoot area for us

FTC Disclaimer:  Although Sweven Media invited me to a complimentary tasting to showcase QQ Thai Ice Cream, the opinions expressed here represent my own and not those of the companies.