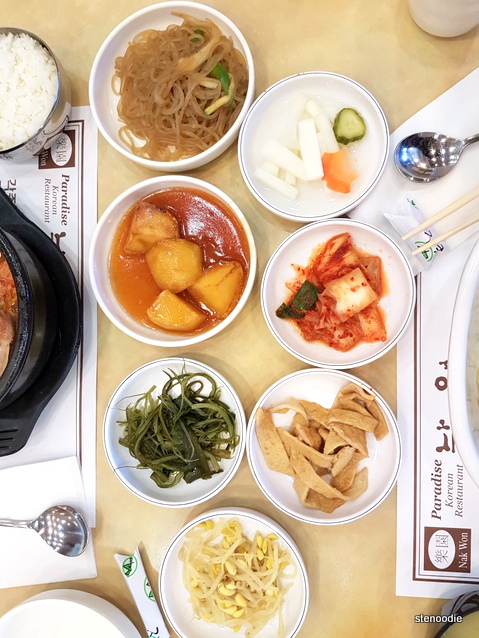 A day after returning home from my month-long Asia trip, I had lunch with my mom and the first thing that popped into my head that I wanted to eat was Korean food.  I wanted some of that spicy yet tangy kimchi and some hot stone pot rice!

Thus, we headed to the Markham location of Nak Won at First Markham place (a foodie heaven since there are so many restaurants all in one place).  I had never been to this location of Nak Won before — I had previously dined at their main branch in North York at Yonge and Finch though (blogged here).

Arriving at Nak Won Korean Restaurant at 1 p.m., there were a lot of people having lunch here already.  Clearly, since we were here for lunch, we took advantage of the lunch specials menu which was incredibly affordable and worth it!  (It really made me think of how cheap it feels like to eat food here compared to eating in Hong Kong because of the bad Canadian Dollar.) 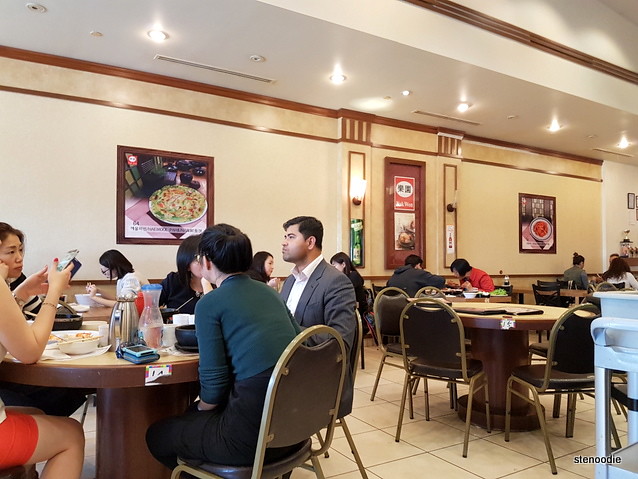 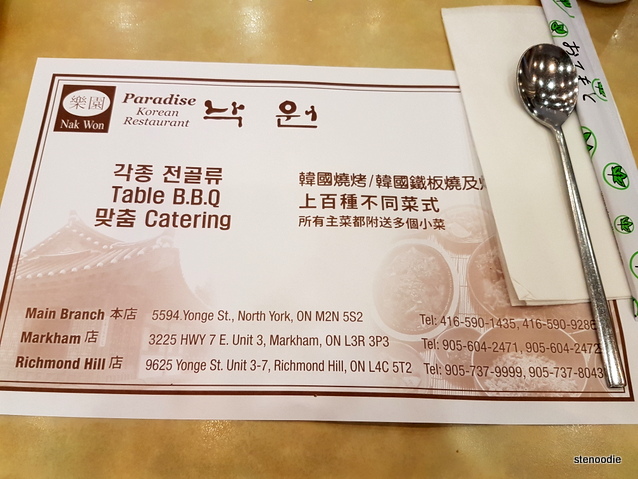 They have 3 locations in total in the GTA so far 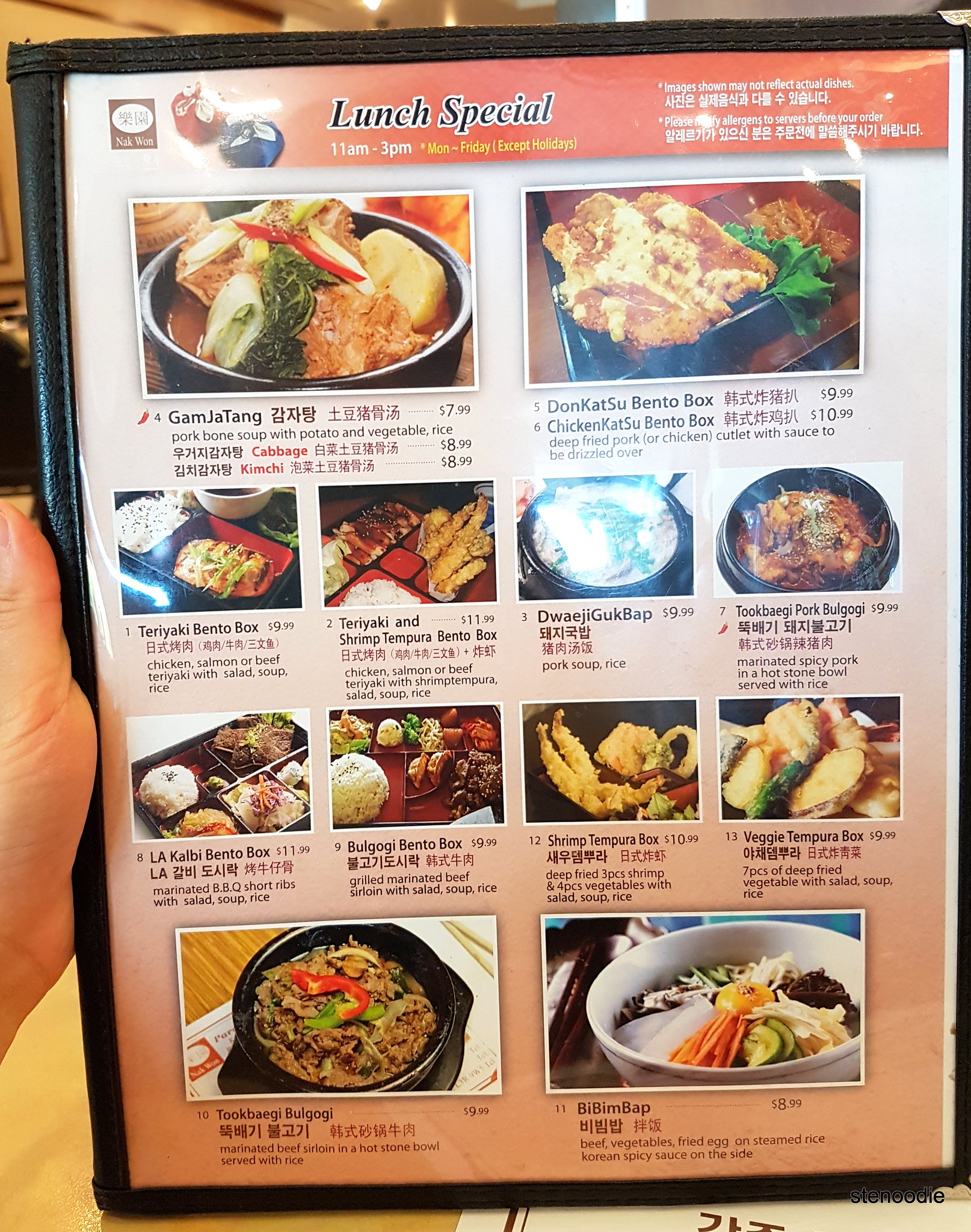 I ordered the Bibimbap while my mom ordered the GamJaTang.  The server was very smiley and friendly!  There was free wifi at the restaurant too.

It didn’t take long for the food to arrive and when it did, the server pulled up a trolley filled with all of our food and banchan and filled our table with it.  Yum! 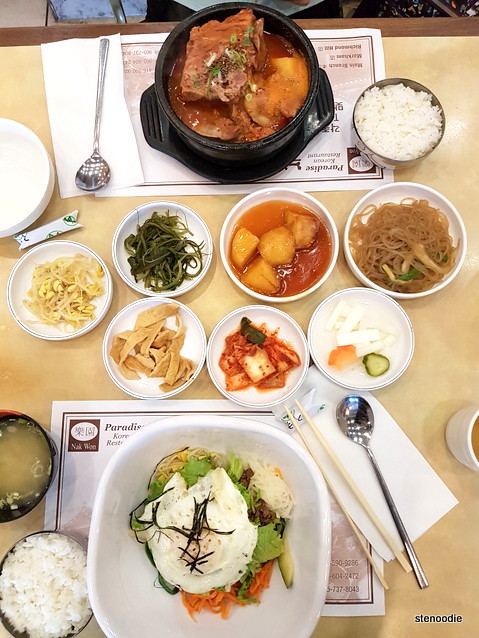 What a beautiful spread of food. ❤ 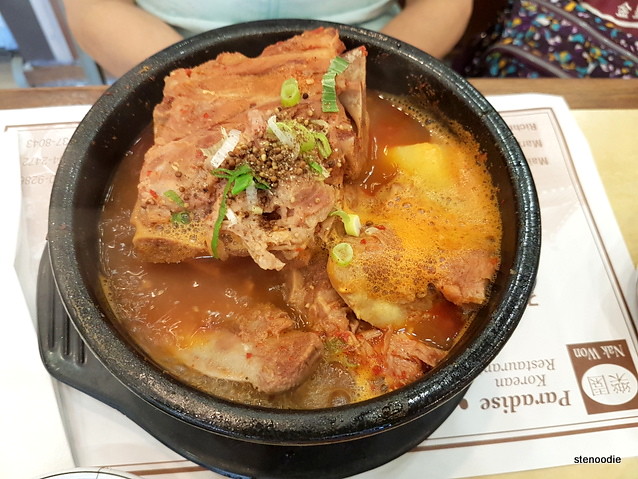 The GamJaTang was a pork bone soup with potatoes and vegetables and rice for just $7.99!  It was hot and bubbling when it arrived to the table.  The soup wasn’t very spicy but it was oh-so-delicious!  I tried a bit of it too and loved how tender the pork was.  It fell off the bone and was incredibly tasty.  It was perfect for my mom who likes spicy foods. 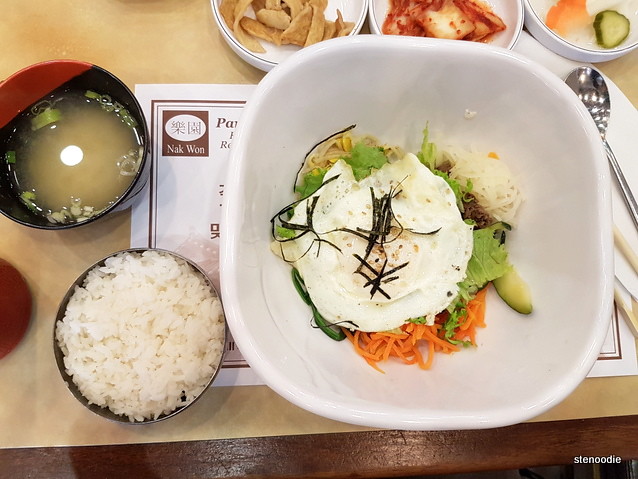 The Bibimbap had beef, vegetables, fried egg, Korean spicy sauce on the side, and steamed rice.  I would say this is a “cold” version of bibimbap since it wasn’t prepared in a hot stone rice.  Either way, it was still very good.  The best way of eating this is to dump in the steamed rice, squirt in as much or as little Korean spicy sauce into the bowl, break apart the fried egg, and mix everything together as well as you can. 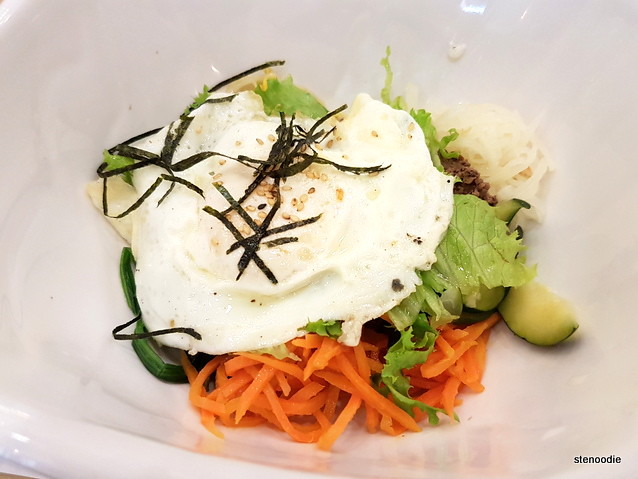 Close-up of the Bibimbap 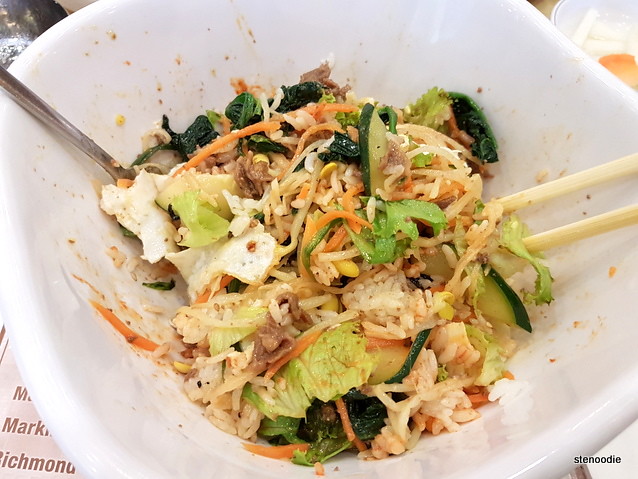 It was a hodgepodge of deliciousness and exactly what I wanted for lunch!

The banchan selection was plentiful and included potatoes, vermicelli, radish, seaweed, bean sprouts, bean curd, and of course, kimchi.  It was all very good and substantial for two people — we didn’t need to ask for seconds.  (Comparing the quality of the banchan though, since I had just come back from a trip to Asia which included South Korea, I do have to say that the quality didn’t match that of the kimchi-orginating country, but you can only do so much about that.  I gather it has to do with the ingredients that we have in Toronto compared to the ones in South Korea.)

All in all, Nak Won is a solid place for Korean food and very affordable as well.  I know I’ll return again in the future. 🙂 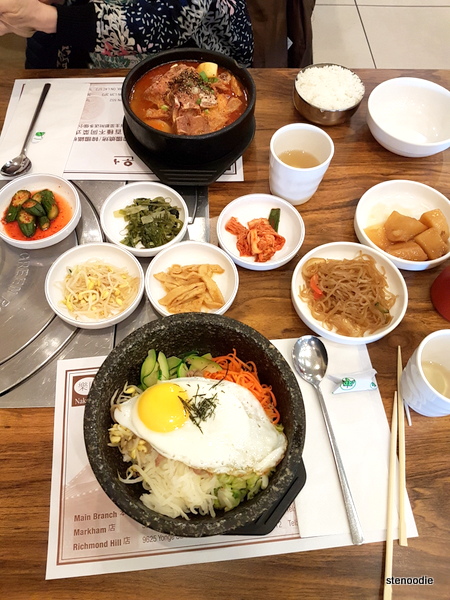 We returned to Nak Won in Markham for lunch.  I had a fond memory of the last visit, but this recent one didn’t live up to my expectations.

One:  They’ve increased the price.  The Gambatang now costs $9.99 instead of $7.99 from two years ago.  I understand inflation but still.

Two:  They seem short-staffed as it took a while for the food to come out.  I know the food takes no time to be served at the next door Owl Restaurant.

Three:  I didn’t like that the banchan was already scooped out and left on their counter and exposed to air.  They were uncovered.  What if there were insects flying around?  At the very least, the banchan is susceptible to all the dust in the restaurant.

Four:  Banchan seems unfresh.  The pickled cucumbers looked more pruney and dry than it should be in a fresh state.  The vermicelli was dry and the texture wasn’t bouncy as fresh ones should be.

Their GamJaTang didn’t have much flavour to it.  I like the one at the Owl better. 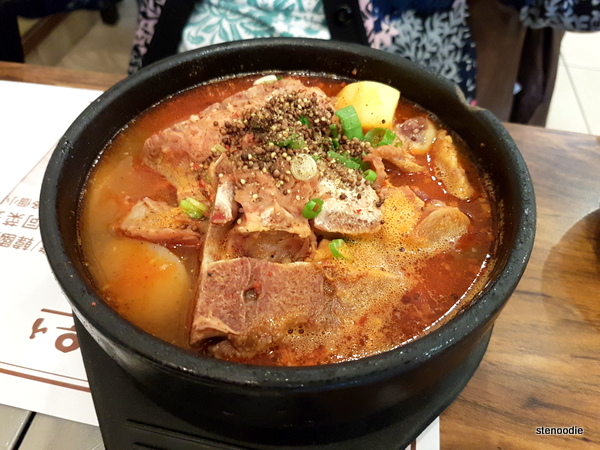 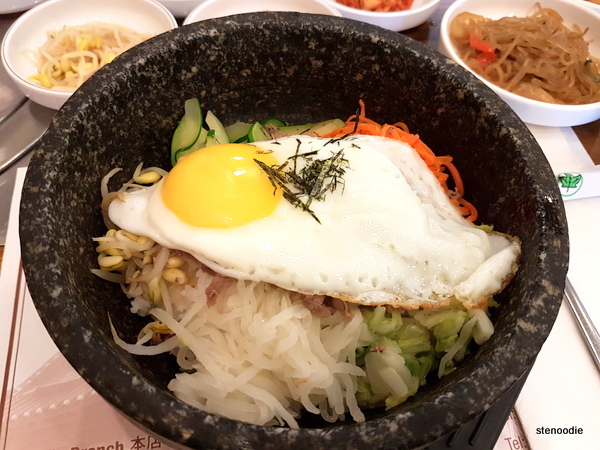