The Owl of Minerva Korean Restaurant & Bar in Markham 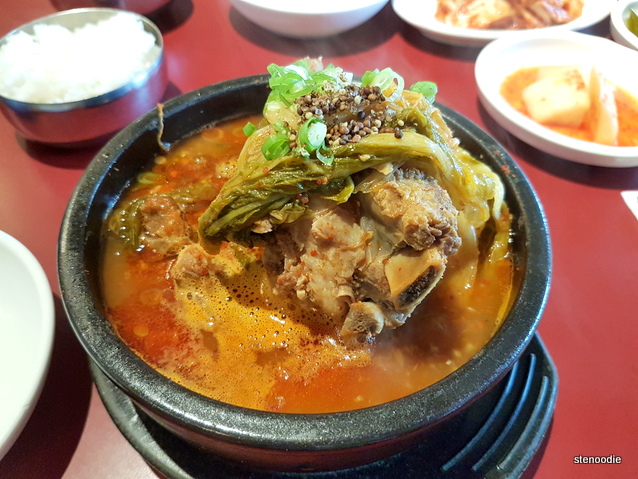 Owl of Minerva Korean Restaurant & Bar located at 3229 Hwy 7, Unit #7b in Markham

The last time I went to an Owl of Minerva Restaurant & Bar was more than a decade ago (wow…) back in university at the downtown Chinatown location with two friends.  Since then, I haven’t really paid much attention to this family-friendly Korean franchise restaurant.  I guess I didn’t have the best impression after going there after my first visit so it didn’t stick out as a place worth returning to in my mind.

However, when I went for a dinner with two friends this past Monday at the Markham location of Owl of Minerva (located in the First Markham Place plaza), I was very impressed! 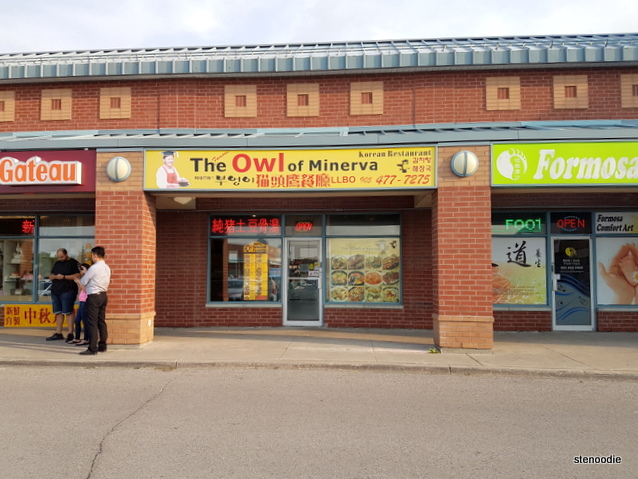 They are located in the ever popular First Markham Place

The three of us happened to all order the Pork Bone Soup (KamJaTang) that night.  Although it was a Monday night, there were a decent number of people dining in.  (I actually recall this restaurant previously being that of the now defunct [for good reason] Lemon Tree, a Vietnamese restaurant — I recognized the layout.) 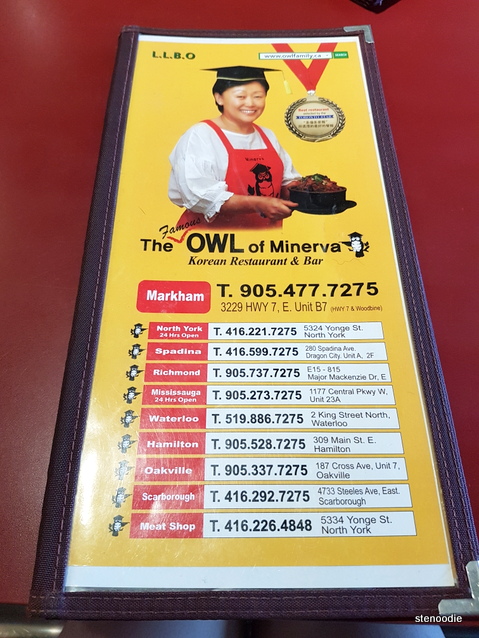 Menu cover that shows all of their other GTA locations

We were served the banchan first.  They only served three types of banchan here: kimchi, pickled radish, and pickled seaweed.  They were decent and the kimchi wasn’t even spicy at all. 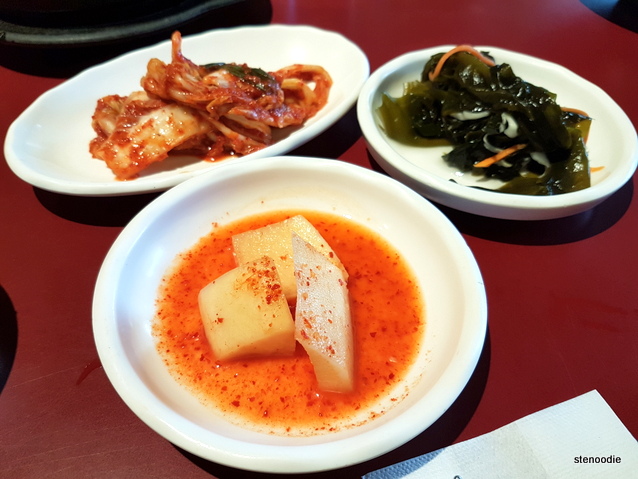 I really liked their pickled seaweed here too 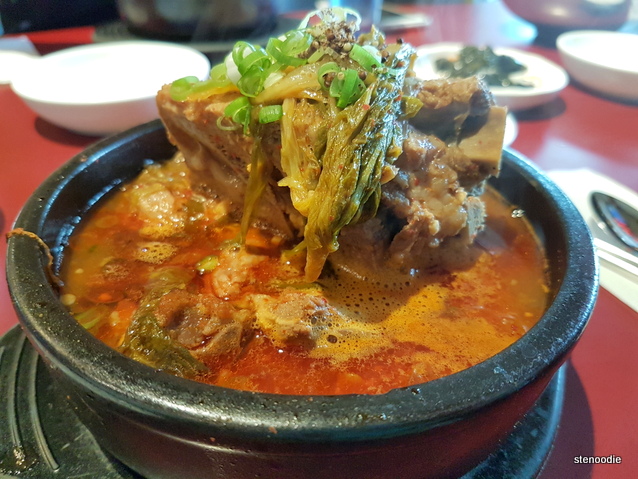 I was so impressed with the taste of it!  I haven’t had Pork Bone Soup in a while but I loved this one because the pork was so tender and fell easily off the bone, the broth was very delicious (I asked for mild spice), and it was just an overall very satisfying and delicious bowl!  It was served with white rice.  There was a huge single piece of potato inside the soup too.

I didn’t end up finishing the PBS and luckily had some tupperware inside my car so I could pack it away without asking for a disposable container.  Yay! 🙂

For $9.99, it was such a great and cheap meal.  I’m totally coming back for more PBS in the future here! 😀  I had forgotten how delicious it can be. 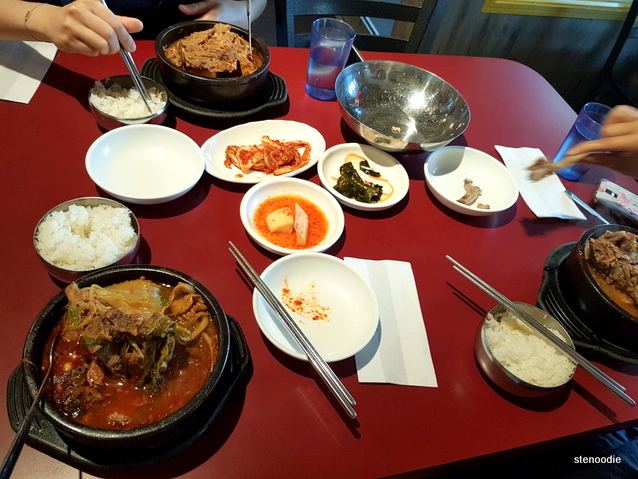 January 6, 2018:  Returned here for dinner with my babe.  It was a cold night and we both ordered something soupy for dinner. 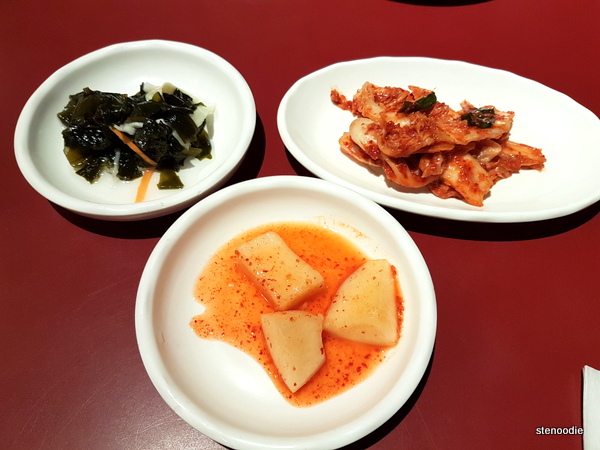 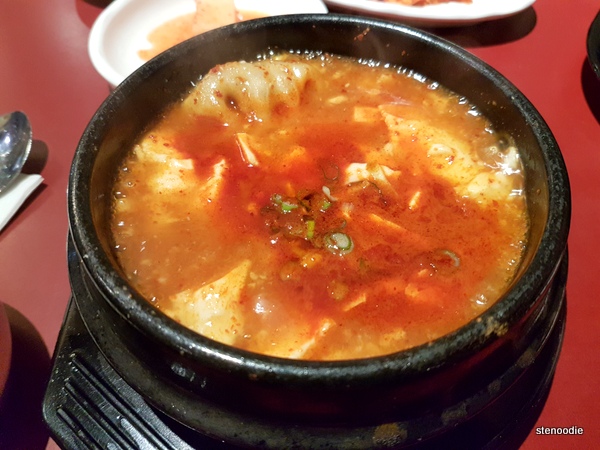 I ordered the Soon Du Bu, Dumpling Tofu Soup, which had soft tofu, dumpling, beef, onion, and green onion in stew and served with rice.  I asked for it to be mild with a little bit of spicy and when it came out with a dash of that spicy red in the soup and the first sip tasted exactly how I wanted it to be, I was a happy camper.  The tofu was very soft!  The soup was delicious.  There were only two dumplings in there though.  I think there should have been more than that.  There were a few chunks of beef in there.  It came with white rice.

My babe ordered the Ramyun, another soupy dish I was contemplating ordering but since it was literally just instant ramen noodles, I didn’t think it was worth the price.  The Ramyun instant noodles also came with rice cakes, egg, and assorted vegetables. 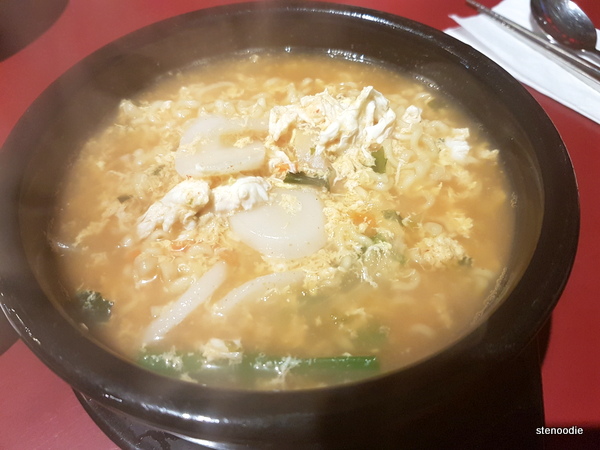 When it arrived, it was hot and soupy and definite comfort food.  I liked the egg in it.

I wish The Owl gave more than just three banchan dishes.  Their kimchi is still just as good and not too spicy. 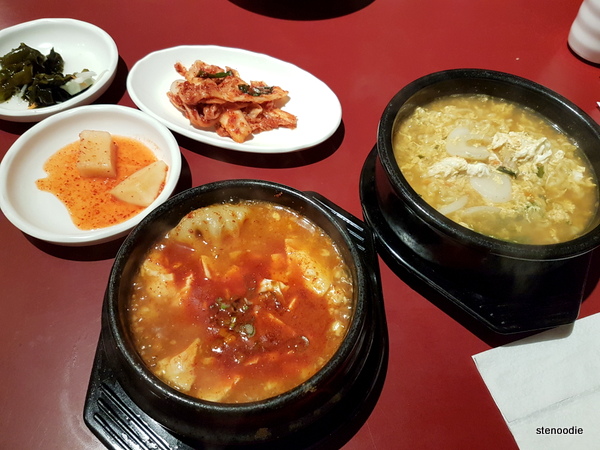