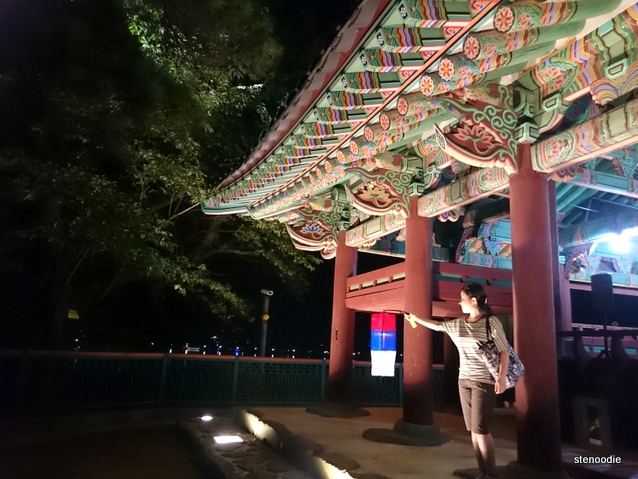 This was one of my favourite photos from my trip to Korea this summer.  It was the second annual Ohsaekdalbit, Gangneung Culture Night, and volunteers manning the booths were handing out lanterns in the colours of the South Korean flag — very patriotic.  This celebration was in light of Chuseok, a major harvest festival and a three-day holiday celebrated on the 15th day of the eighth month of the lunar calendar on the full moon.  It bore similarities to the Chinese version which was the Mid-Autumn Festival, also happening that week.

As such, the lanterns were a familiar celebration piece during this time of the year.  It is something that children light up and walk around with on the street after having a big family dinner.  After its candle was lit, the lantern shone brightly in the night as we walked around with them.  I hadn’t played with a lantern in so long; it was like being a kid again!  (Actually, I did see more kids that night holding these than the adults, haha. XD)

Something else that was shining that night:  the full moon that was covered by clouds (boo) and also my face shining in the night against the stage lights. XD