Media Event at The Poké Box! 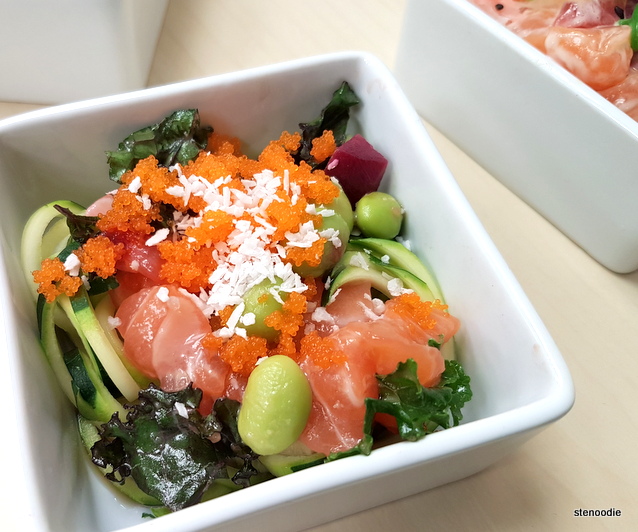 The Poké Box located at 36 Toronto St in Toronto

What a wonderful media event we had at The Poké Box on a Monday evening!  By now, those attuned to what’s trending on the Toronto food scene has noticed that there have been many poké shops opening up all around the city and The Poké Box is the latest one to join the poké craze.  For me, this was actually my first time trying poké and I was incredibly excited to try it out.

Thanks to Patrick of @feedmyphone, around 15 foodies gathered for the 5:30 to 7 p.m. time slot to try out the poké creations at The Poké Box.  The Poké Box is located at 36 Toronto Street intersecting Adelaide Street and Yonge Street in downtown Toronto.  It’s situated right in the heart of the Financial District which makes it an apt spot for those looking for a healthy meal for lunch between busy work hours or dinner after work.  (I had some trouble finding it at first but it’s on the street of Toronto Street — don’t be confused by the building labelled “36 Toronto Street”; it’s not in there!) 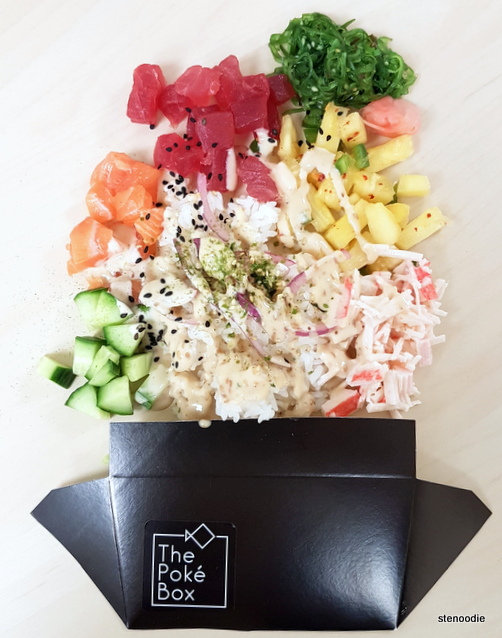 Poké is a “raw fish salad served as an appetizer in Hawaiian cuisine, and sometimes as an entrée.  Poké is the Hawaiian verb for ‘section’ or ‘to slice or cut'” (thanks Wikipedia).  It’s essentially a raw fish salad, meaning it’s quite healthy and doesn’t contain any meat.  I also like to think that it is a bowl containing all of the delicious ingredients of what you would find in sushi.  In other words, poké is quite delicious and lovable by all! 😛

The Poké Box is different from the other poké shops in the sense that they are “serving up delicious, no-fuss nutrition in custom poké boxes”. 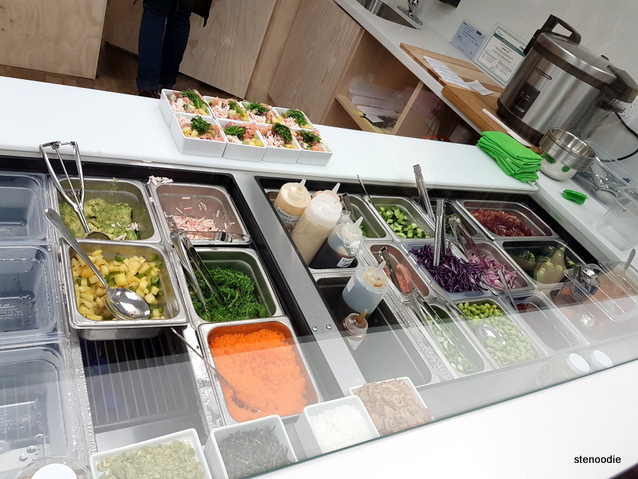 Clean counter and lots of fresh ingredients for the poke boxes 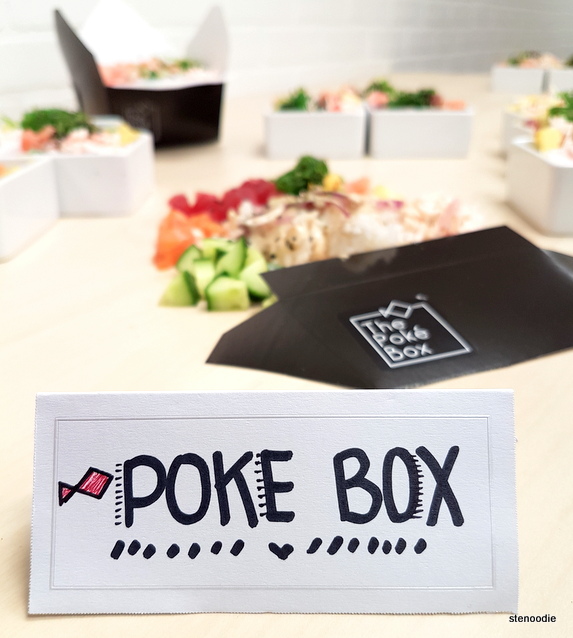 Whereas the other poke shops in the city have been serving poke bowls, the poke is served in boxes here 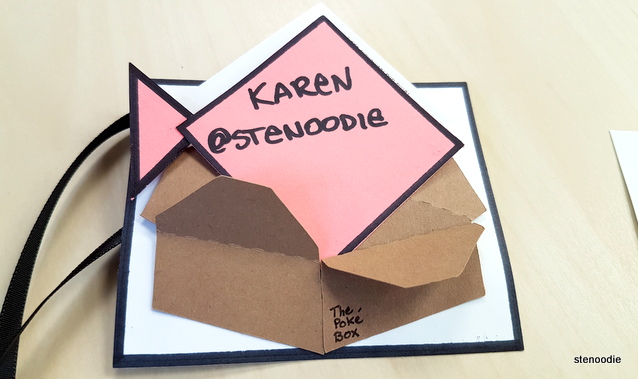 Thank you, Jenny, for such a cute nametag!

The media event began whereupon everyone donned cute name tags created by Jenny of @cardsbyjd.  She also made these cute props to take photos with for a photobooth.  I think we were all shy and didn’t use them to their full advantage, however.  They were incredibly cute though and I made up for not using them by taking photos of them instead. 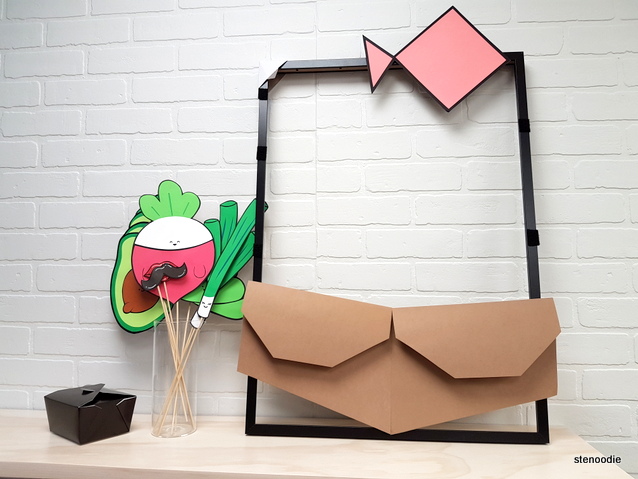 A photobooth area where you could use the cute props! 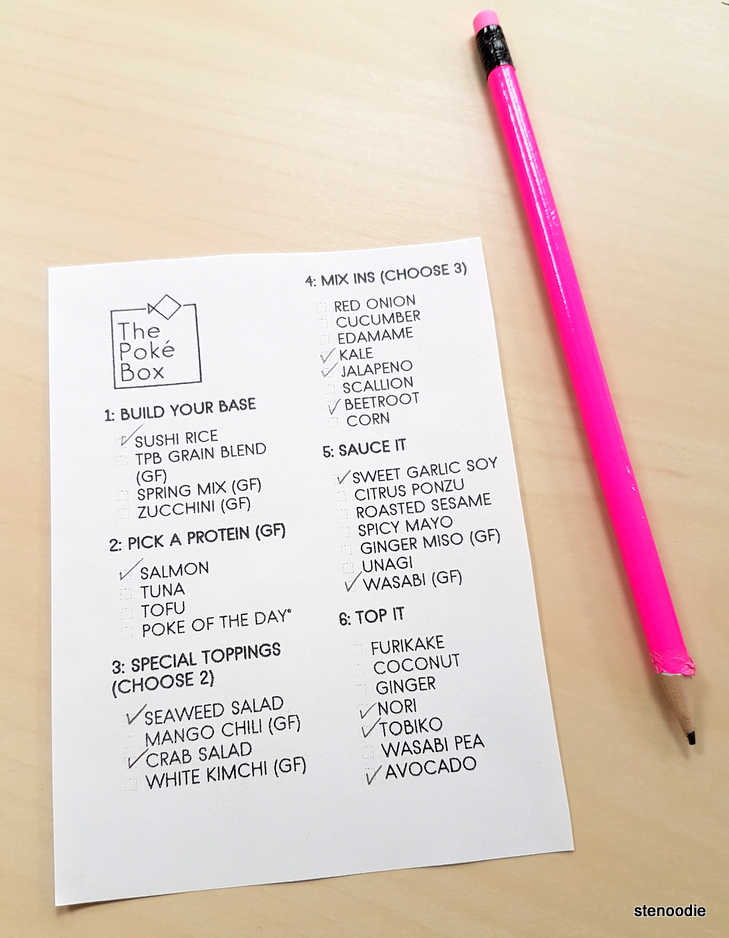 Filling in the sheet for my custom poke box

We were given a slip of paper with the choices of ingredients we wanted in our poké box.  We filled them out and gave them to the staff so that they could prepare the boxes for us.

Jeremy and Kevin were the masterminds behind this new poké shop in Toronto.  They actually thought of the idea over six months ago but unfortunately weren’t fast enough to open their shop before their competitions, stealing their thunder, I would like to think. 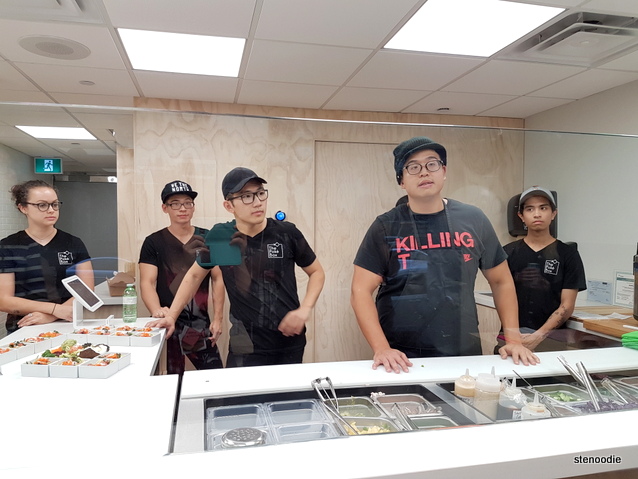 Jeremy, Kevin, and the rest of their team that makes up The Poké Box

We were treated to a generous sample of the Signature Poké Box and the Superfood (I loved that the samples were served in reusable square bowls — often times, media events will serve their samples in plastic single-use items.  I loved that they were being environmental friendly here!).  These were creatively set out for us on the white table for us to take as many photos as our hearts desired.  Good thing these were not piping hot dishes needed to be eaten right away otherwise everything would have been cold by the time we ate them! 😛  (Yes, totally calling out the food photographers who take forever to take photos…). 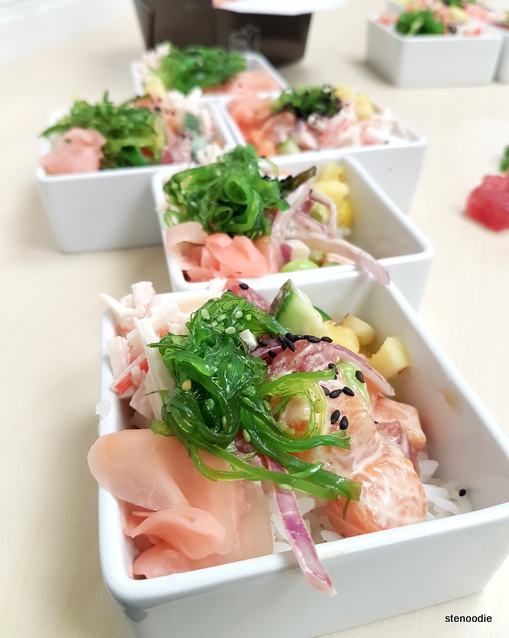 Beautifully made for us! 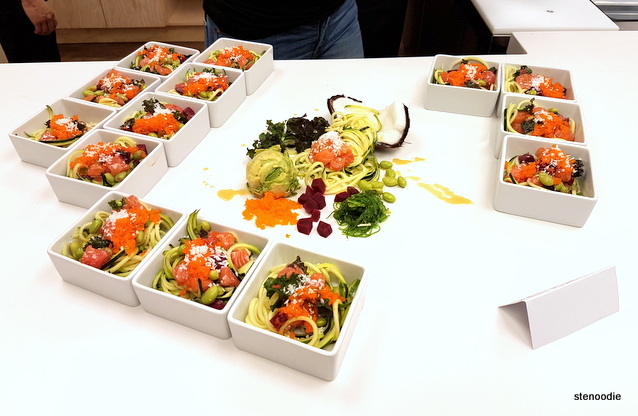 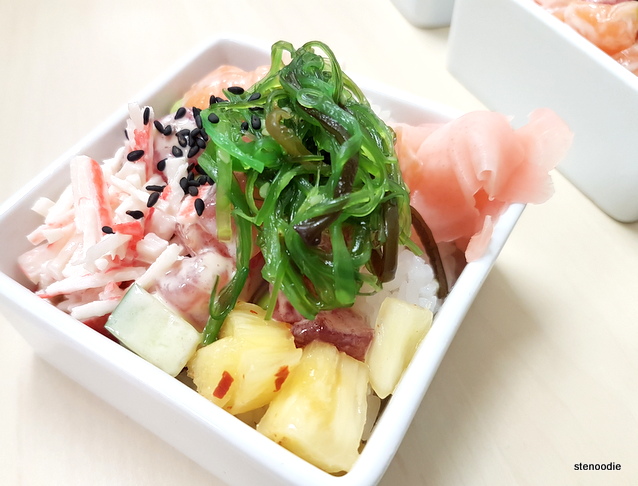 The Signature Poké Box contained tuna, salmon, mango chili, seaweed salad, crab salad, cucumber, edamame, red onion, roasted sesame, furikake, and ginger on top of rice.  It was really tasty and I admired how the edamame was fresh.  The seaweed salad was also very fresh.  I would have preferred the crab salad to be more soft as I found it a bit harder than most. 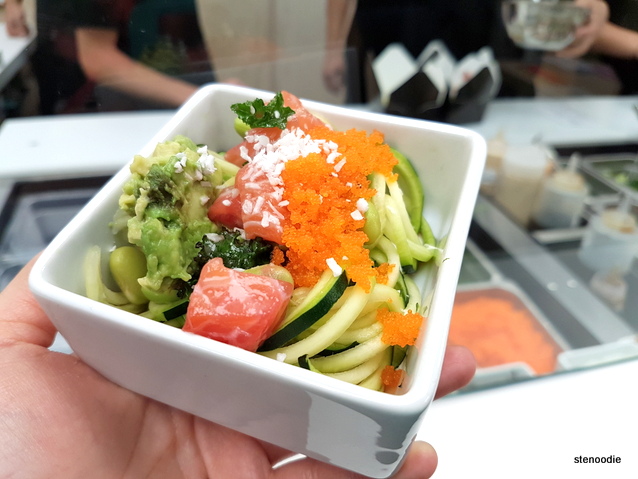 The Superfood contained salmon, edamame, beetroot, kale, seaweed salad, avocado, ginger miso, coconut, tobiko, and sesame.  I found it unique that this contained coconut.  I really enjoyed that this poké box sat on top of zucchini instead of rice.  That change made it a really healthy and definitely refreshing salad to eat.  The texture was incredible as well. 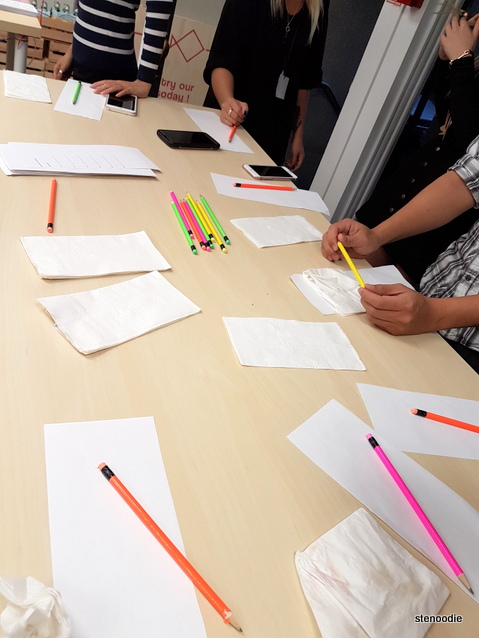 After we enjoyed our samples, we were treated to a fun game!  Jeremy hosted a blind food tasting challenge for willing participants.  Some of the foodies watched their fellows try out five items to try to guess what the items were.  I usually prefer to watch others play these kind of games but this time, I chose to be a participant.  It was really fun!  We closed our eyes and the ingredients were placed into a plastic cup and pressed into our hands so that we knew to start trying and guessing (honour system in place since we didn’t use blindfolds).  We wrote our answers on a slip of paper.  After guessing, Jeremy took them to the side of the room where he marked the first three who got the most answers correct to win some prizes.  I actually got most of them — they were sweet miso paste, peanut paste, kale, apple cider vinegar, and beetroot.  The only ones I didn’t get were the apple cider vinegar and “sweet” miso paste.  Again, it was really fun and definitely a unique media event because of it! 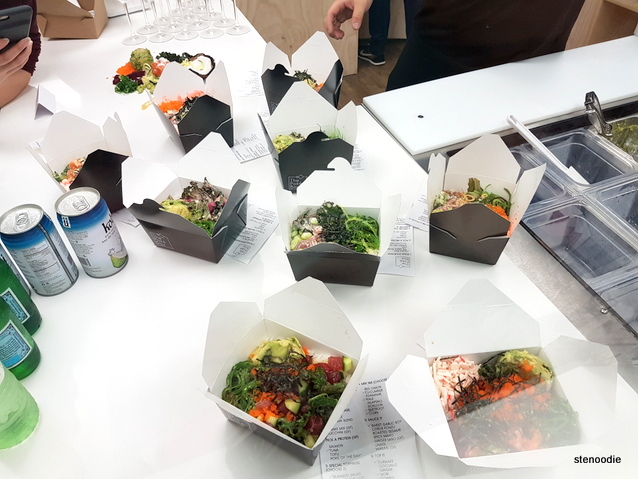 Our custom poke boxes ready for us!

The event had come to a close very soon after the winners were awarded their prizes and thus we were all awarded with our custom poké boxes too!  We were given the small size to try and even then, it was a very substantial portion and full of fresh ingredients!

For my poké box, I chose sushi rice as the Base; salmon as the Protein; seaweed salad and crab salad as the Special Toppings; kale, jalapeno, beetroot as the Mix-ins; sweet garlic soy citrus ponzo and wasabi as the Sauces, and finally topped with nori, tobiko, and avocado.  Mmm, yummy!  My creation was quite colourful! 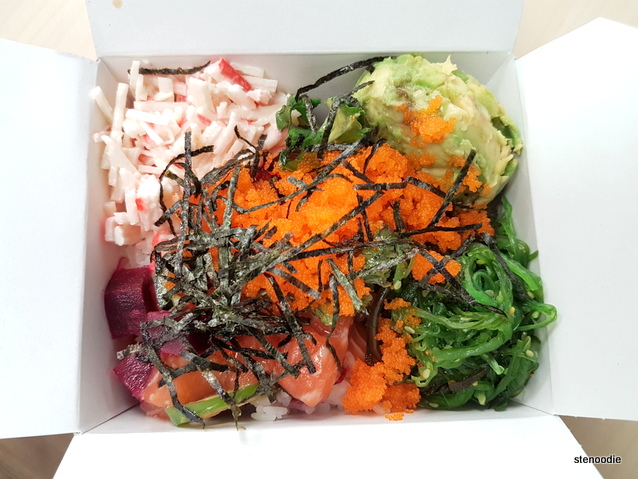 I really enjoyed the salmon in my poké box.  It was seasoned just right, fresh, and tender, and the rest of the ingredients made the poké box incredibly flavourful. 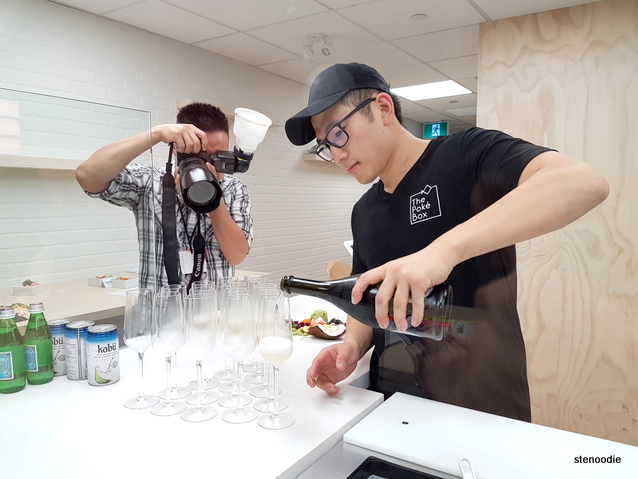 We were given champagne to celebrate their opening!

What a definite pleasant first impression of a Poké Box!  Patrick and the crew at The Poké Box also did an amazing job serving us and hosting the event.  It ran smoothly and the blind taste taste challenge was a highlight of the night (just after the delicious poké, of course).  Thanks again, guys!  Also thanks to Jenny for the nametags and props and Jon for the cool Snapchat geofilter! 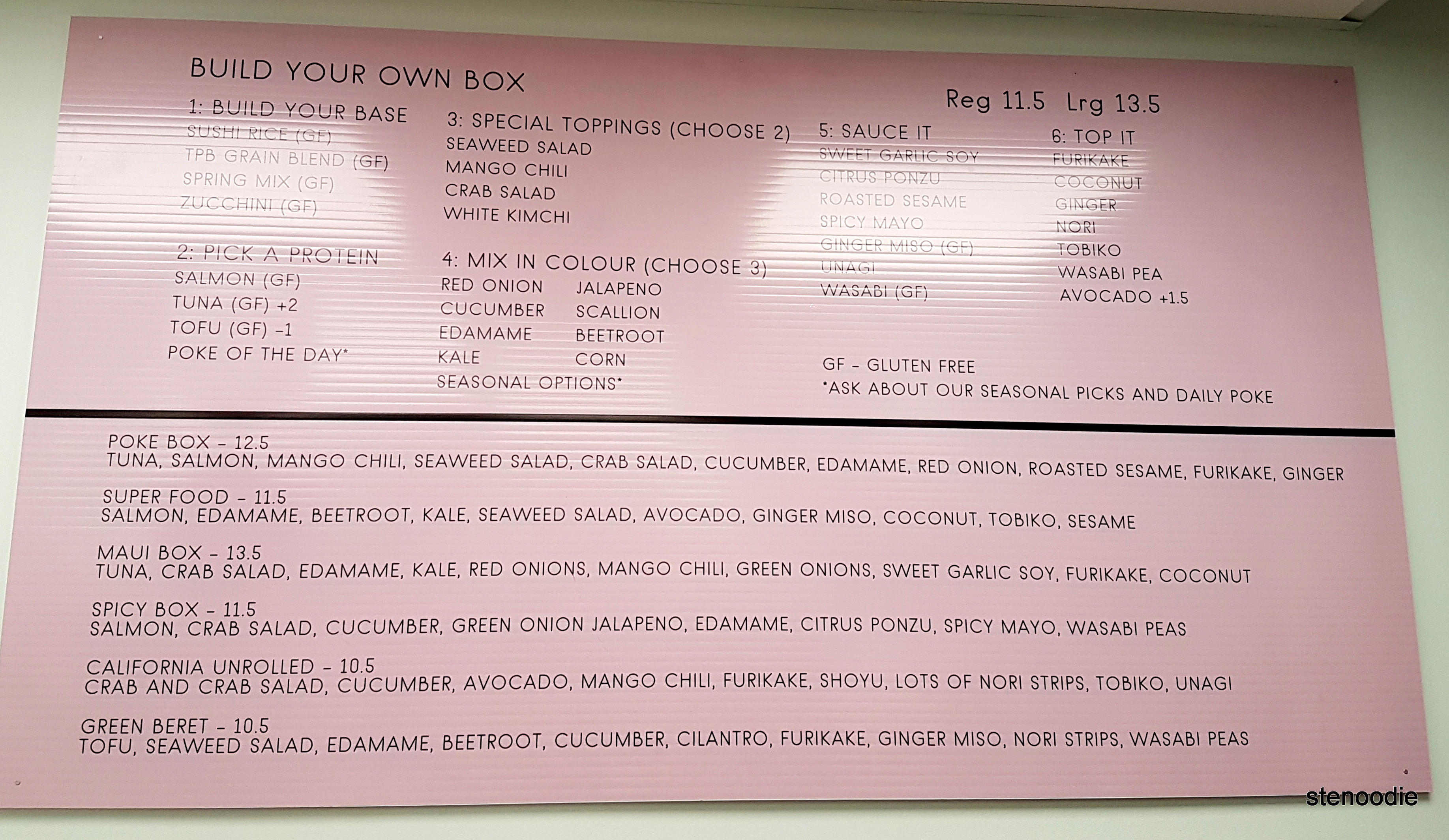 The menu and the prices! 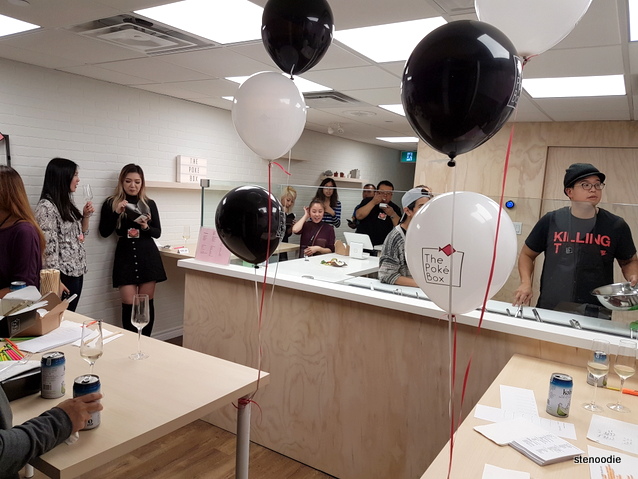 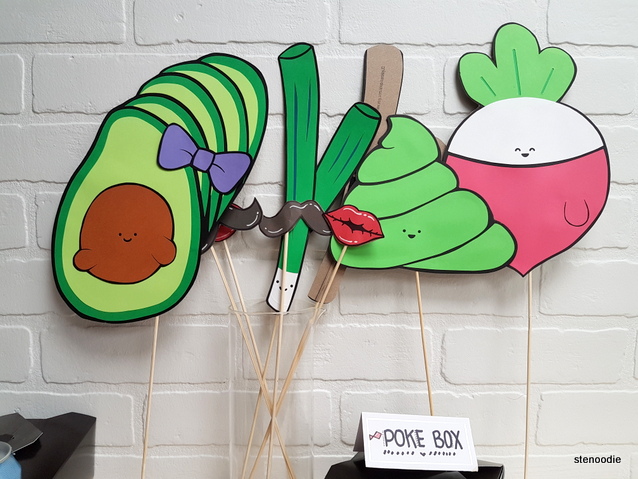 I just had to take another shot of these super cute cartoon poke box ingredients before I left! Jenny is one creative lady! 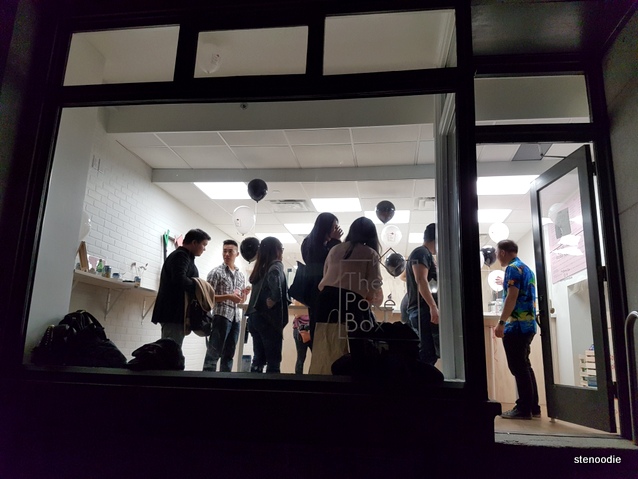 Looking from the outside at the event going on

FTC Disclaimer:  Although @feedmyphone invited me to a complimentary tasting to showcase The Poké Box, the opinions expressed here represent my own and not those of the companies.