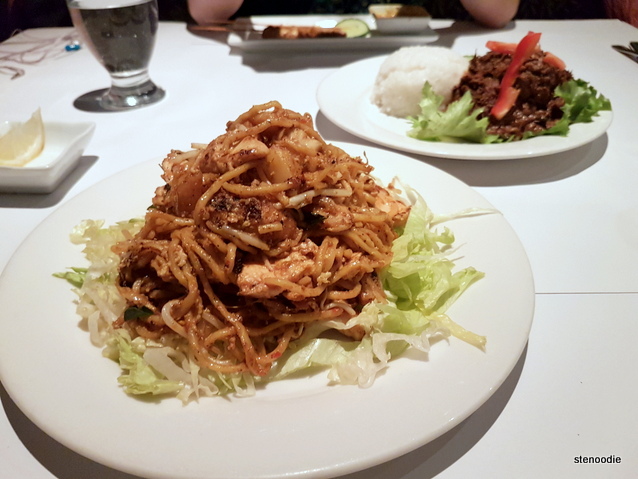 Last night, for my first spot of the bi-annual culinary prix fixe restaurant, Daphne and I dined at Matahari Bar & Grill located at 39 Baldwin Street in downtown Toronto.  Daphne has raved about Matahari several -licious seasons ago and thus I was quite curious about this restaurant that featured cooking that blended Malaysian, Chinese, and Indian influences.

When I arrived at 5 p.m., there were already two tables dining inside the dimly lit restaurant.  There were a lot of seating available but it seemed that some of the booth seats were a little tight-fitting. 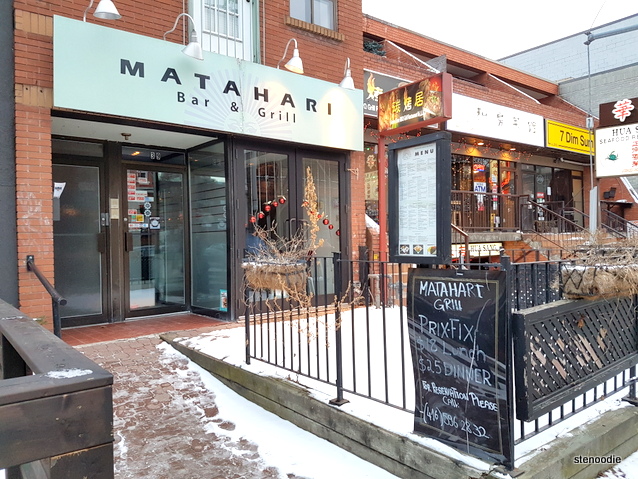 One of the many restaurants located on Baldwin Street 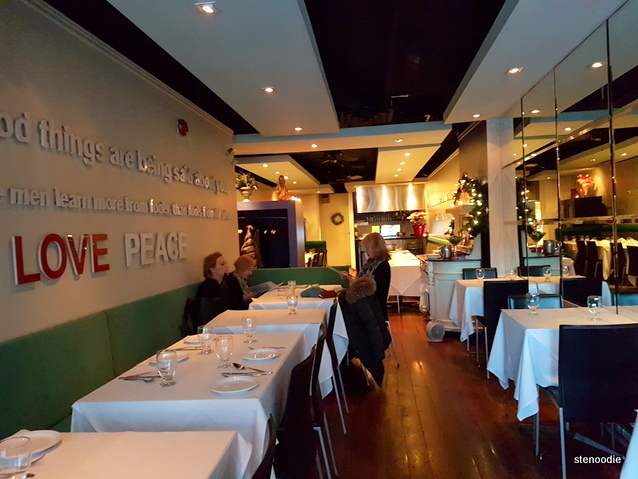 First view of the restaurant from the doorway

The prix fixe dinner cost $28 per person and included a nice range of their regularly featured appetizers, mains, and desserts. 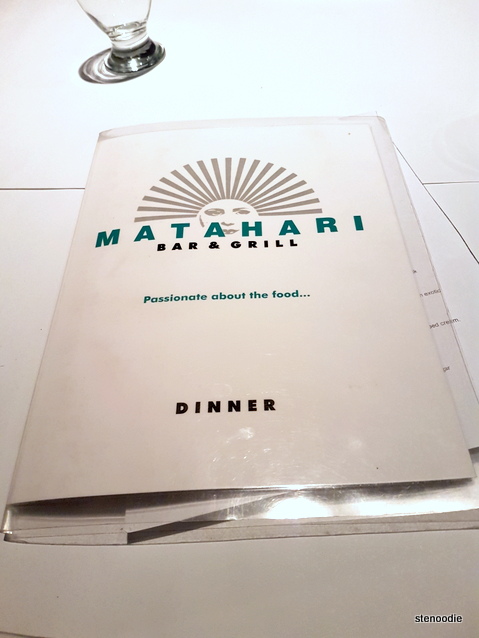 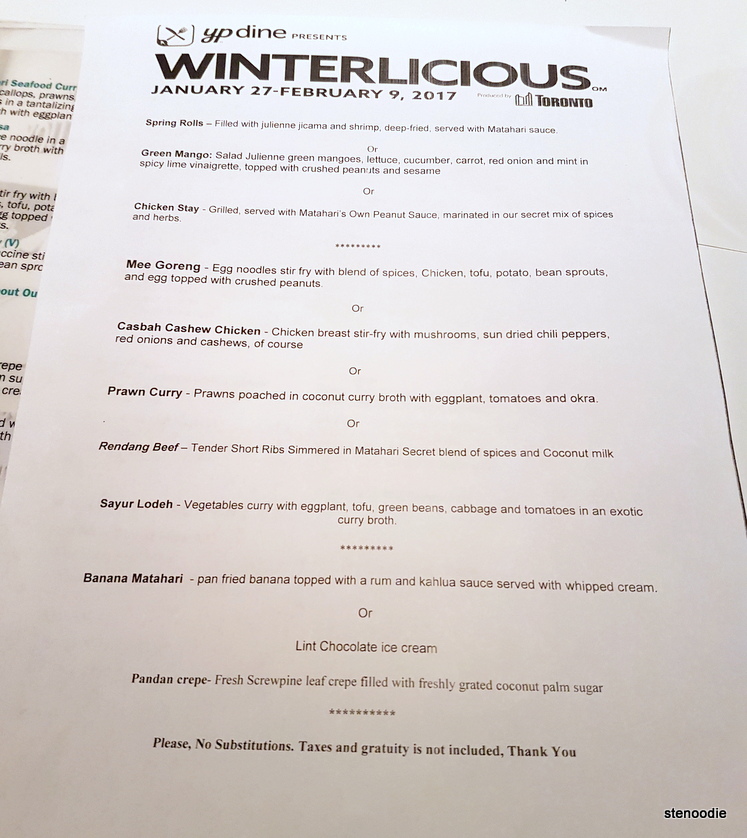 There was one server for the restaurant the night we were there and he did a good job catering to us and to the rest of the other tables. 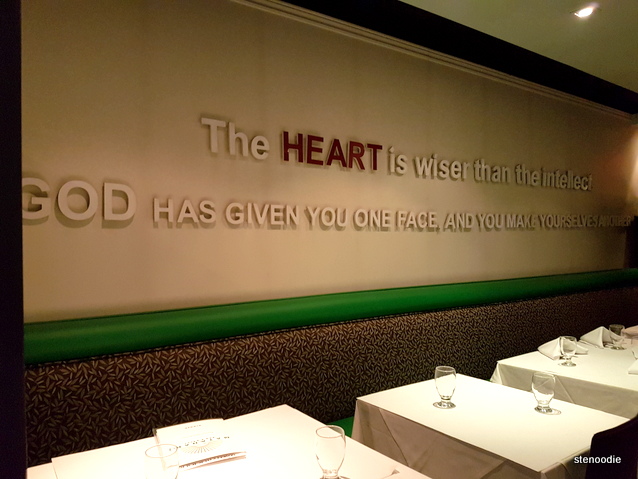 On the wall: “The heart is wiser than the intellect. God has given you one face and you make yourselves another” 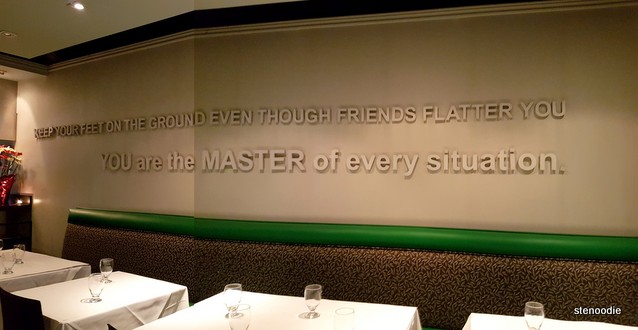 On the wall: “Keep your feet on the ground even though friends flatter you. You are the master of every situation”

Our appetizers arrived quickly after we had placed our orders.  The Chicken Satay was grilled, served with Matahari’s own peanut sauce, and marinated with their secret mix of spices and herbs.

There were two pieces of chicken satay on the two skewers with the peanut sauce on the side.  I thought that the chicken meat was not tender enough and quite hard to chew through.  The peanut sauce, as Daphne noted, was devoid of much peanuts. 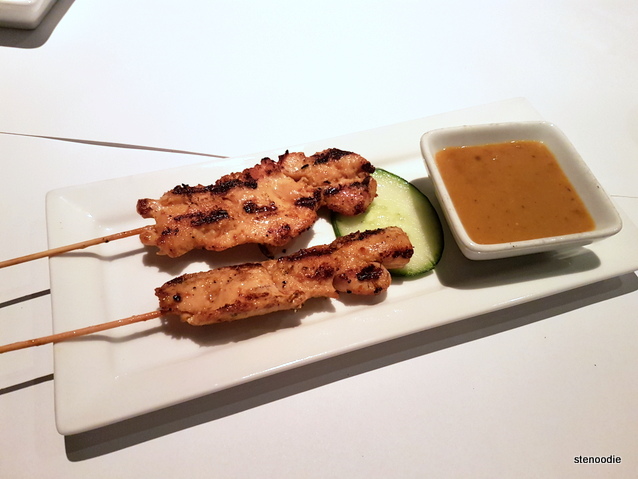 Chicken Satay
-grilled, served with Matahari’s own peanut sauce, marinated with their secret mix of spices and herbs 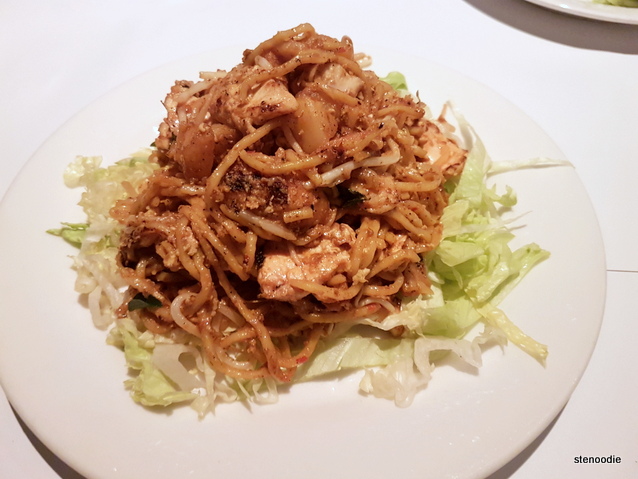 For the main, I ordered the Mee Goreng which was a plate of “egg noodles stir fried with a blend of spices, and had chicken, tofu, potato, bean sprouts, and egg”.  It was “topped with crushed peanuts”.  I was actually really excited to try this Malaysian/Singaporean dish but I was a little disappointed.  The flavour and taste were quite good but I found the egg noodles to be quite chewy.  In fairness, the left side of my gums were a little sore that night so perhaps that was why I thought the egg noodles were extra chewy.  However, I thought that the chicken was also too hard and could have been more tender.  I didn’t see many crushed peanuts on top of the dish. 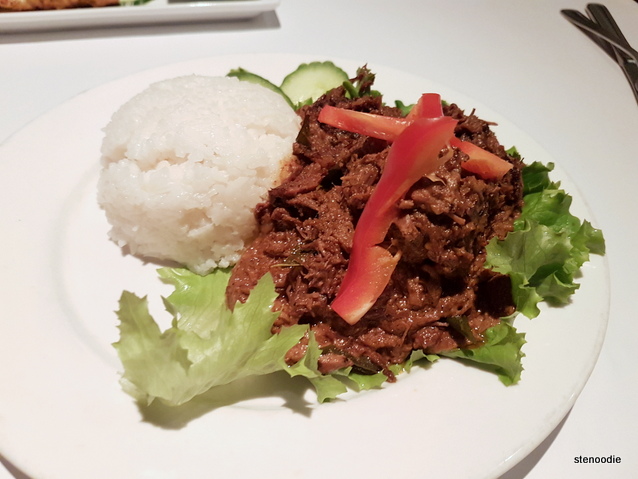 I tried a bite of the Rendang Beef that Daphne ordered.  It had “tender short ribs simmered in Matahari secret blend of spices and coconut milk”.  To my surprise, the short rib meat was entirely deboned and quite mushy and placed on the side of the plate.  There was coconut rice on the plate too.  The beef was very spicy, even for the small bite I took to try.  For the duration of our meal, Daphne was found downing several glasses of water in order to cool down from the spiciness of this dish. 😛 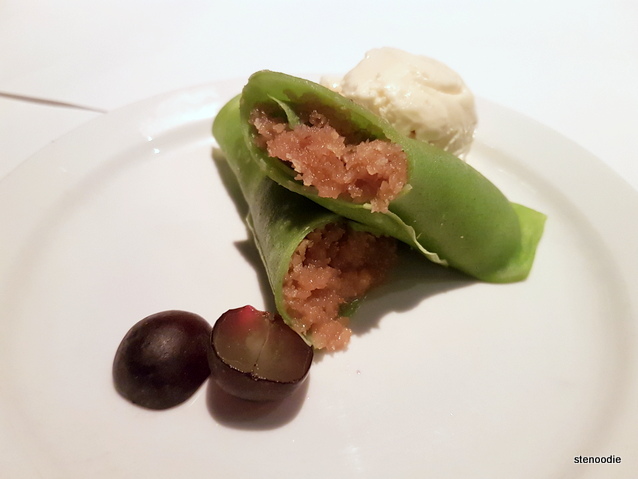 For dessert, we both ordered the Pandan Crepe which was a fresh screwpine leaf crepe filled with freshly grated coconut palm sugar.  I had never tried this dessert before and it was really unique!  The fresh screwpine leaf crepe was green in colour and so soft (but didn’t really taste of anything in significance).  The freshly grated coconut palm sugar was nestled inside the crepe.  I’m not a huge fan of coconut flakes or chunks which was what the texture of the palm sugar tasted like.  I enjoyed the ice cream that was included with this dish though.

All in all, I felt that this was a very mediocre restaurant for predominantly Malaysian food.  No offense at all to the restaurant!  I wanted to like this restaurant; I really did.  But I felt that the food fell short of my expectations.  I’m sure others enjoy various dishes here during non-Winterlicious times. 🙂