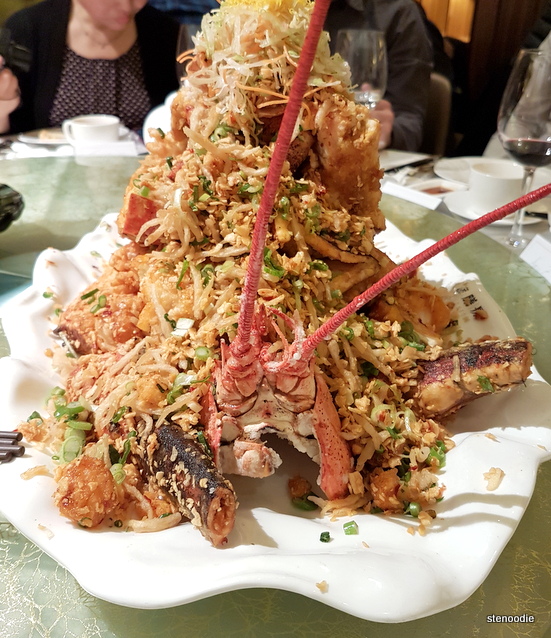 This is a recap of the Yelp Elite Event that I attended this past Wednesday.  This was actually the very first Yelp Elite event that I could make it to.  There were a couple of other ones that piqued my interest but unfortunately, I wasn’t able to make it to those ones.

Thus, I was very excited to attend this dinner event at Yu Seafood (漁膳房‎).  Previously, they advertised the event as “Moonlight Dim Sum” as in we would be dining on dim sum at night — no need to wake up early to fight for a table against the aunties and uncles, but as the event approached, the e-mail in my inbox showed a menu that wasn’t reflective of dim sum dishes at all!  Instead, it was a banquet style dinner of seven courses of Chinese food.  Yay!  I was really excited to enjoy these seven courses of food especially since I had never been to Yu Seafood before.

Yu Seafood has a fresh fish market in its complex where they import fresh seafood and these are incorporated into their dishes.  I’ve been to the fish market before as this is where my mom sometimes buys salmon or other seafood for us to eat at home.  Their seafood is very fresh!

The event was slated from 7:30 to 9:30 p.m. and when I arrived at 7:30 p.m., there were already a group of people in the lobby area.  I checked myself in with the organizer and we then proceeded immediately inside the restaurant where we were dining in one of their private rooms.  It was really elegant and nice inside Yu Seafood.  It was definitely a classy restaurant. 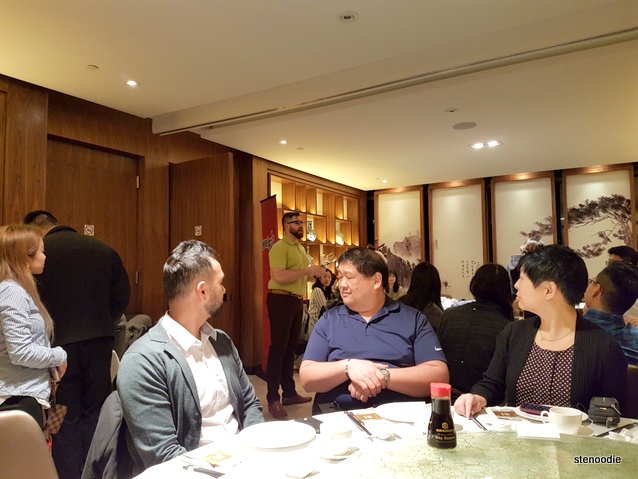 There were four tables seating 10 people each in the room.  Kris and another staff member of Yu Seafood welcomed us warmly to the Yelp Elite (only) event — no plus ones for this event.  We were seated in assigned seating so that we would get to meet new friends that we didn’t know.  As this was my first Yelp Elite event, I actually didn’t know anyone at all.  This was rare for me since I usually know at least one person at foodie events, but this was a different kind of foodie event.  The Yelp Elite crowd is very different demographically from the other PR restaurant events that I’ve been to.  It was really nice to meet new faces and the people that post reviews on Yelp. 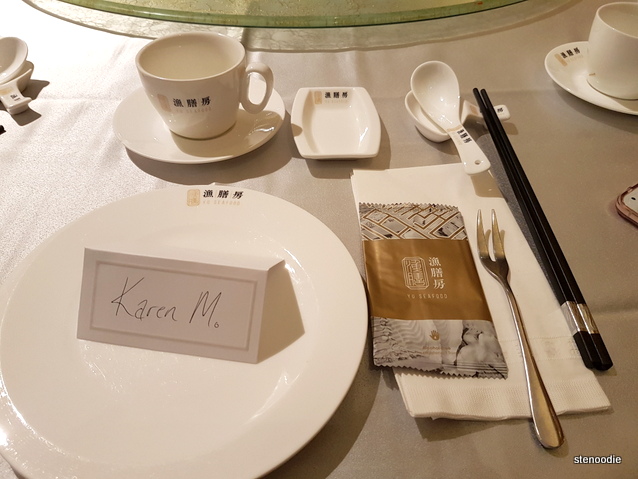 We started off with some of the exquisite teas available at Yu Seafood (although none for me because I’m so incredibly sensitive to caffeine nowadays and can’t sleep after drinking it) and either red or white wine.  I had the white wine that was very light and smooth. 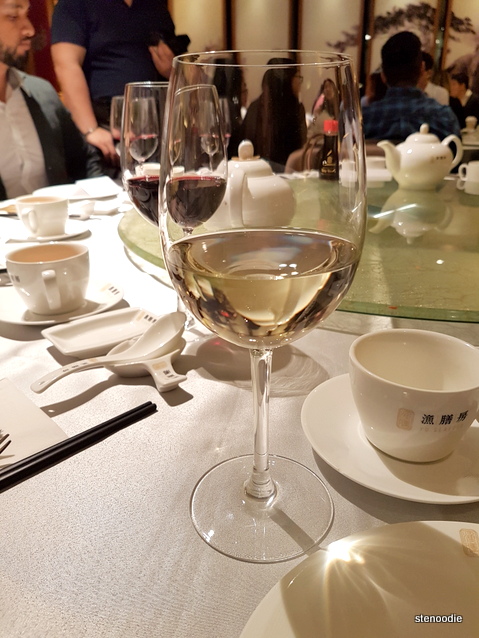 White wine or red wine to kick things off

We did a quick ice breaker around the table to get to know each other before the food started arriving at our table.  Yay! 🙂 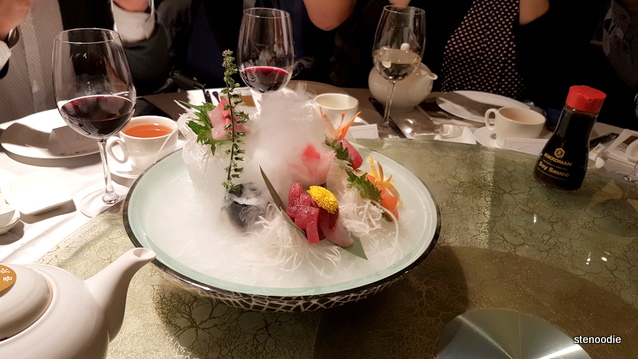 Dry ice smoke coming out of the Sashimi Platter

The first course was a Sashimi Platter consisting of a variety of imported Japanese fish.  This was set nicely on a platter with dry ice coming out from the bottom so it looked like it was smoking.  Unfortunately, I think there weren’t enough pieces for everyone to share.  There were only a select number of salmon, tuna, and another type of sashimi…  And since we were sharing with everyone at the table, the first ones who picked up a chopstick to choose the sashimi got their pick while others didn’t. 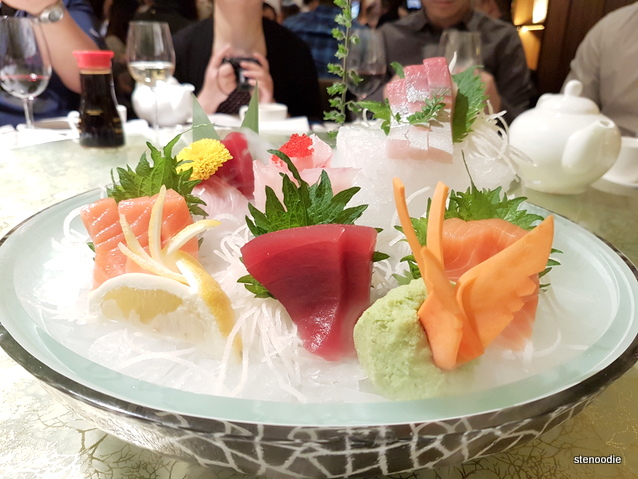 The rest of the dishes didn’t arrive in the order set out in the menu but that was okay. 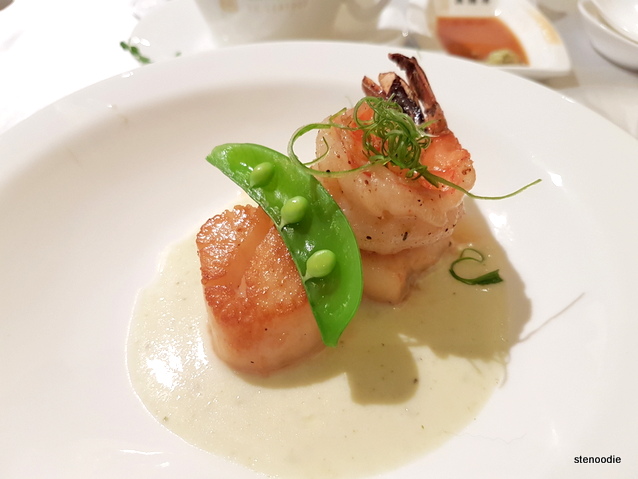 The Pan Seared Scallops with Tiger Shrimp arrived in individual dishes for everyone.  I really liked this.  It was a fine dining type of presentation where there were some green peas, two pan seared scallops, and one tiger shrimp basking in a type of creamy sauce.  I really enjoyed the firm and fresh tiger shrimp but the scallops could have been a little more fresh. 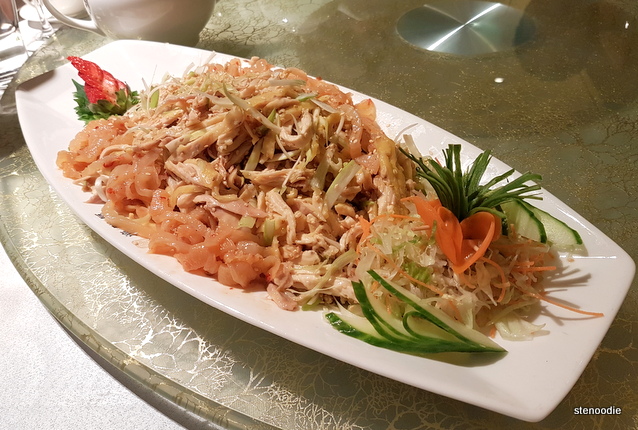 The “Spicy Hand Poached Chicken” was incredible.  Another name for this is “hand shredded chicken” and it includes seasoned jelly fish too.  This is actually one of my all-time favourite dishes although I have to say that I haven’t eaten this as often in recent years — I’m trying to cut down on my meat intake.  Yu Seafood prepared this dish incredibly well.  The chicken was hand shredded with some of the skin intake and was very tender and well seasoned.  The jellyfish were strong and firm too.  It was an absolutely delicious dish made to perfection! 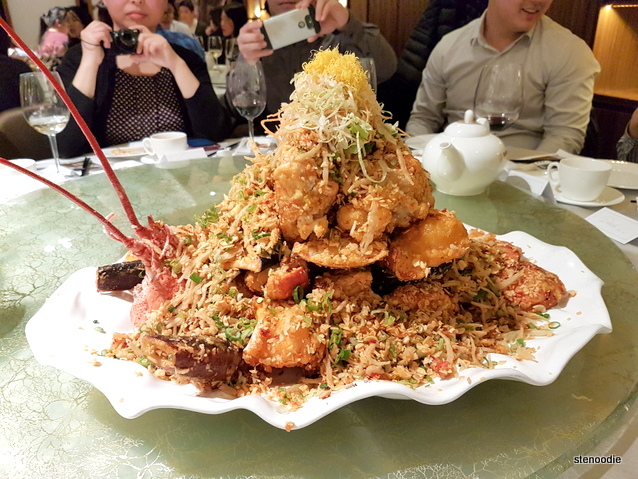 Next, the Famous Stir-fried Lobster Tower arrived and lots of “ooh’s” and “ah’s” emerged from the table as this large plate of stir-fried lobster arrived.  I’m not trying to be jaded but I’ve had this dish many, many times before and also seen it in photos on social media.  It seemed that many people at our table hadn’t had this before and I appreciated how well received the lobster dish was.

After the influx of photos were taken and cameras satisfied, we dug into the dish.  There were lots of crispy stir-fried lobster with huge pieces of meat!  Those who knew which pieces were the best got the most meat out of it.  Those who were timid of eating such a ginormous lobster probably got the pieces with the less meat.  It really comes to show you that experience matters when you’re eating something of this nature lol. 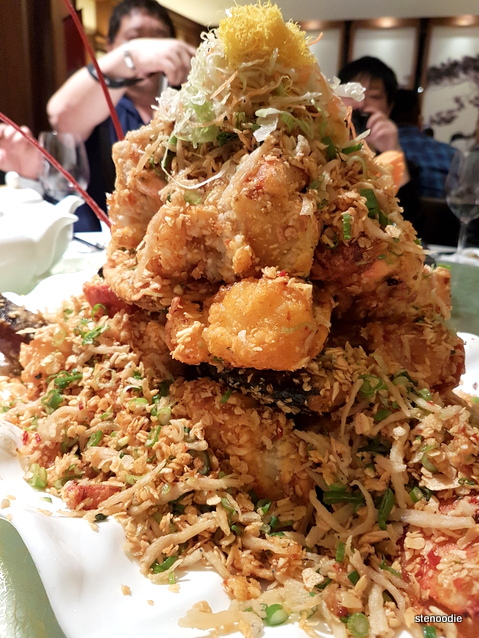 This lobster was absolutely delicious.  The meat was so fresh, so firm, and nicely stir-fried.  There were lots of small crunchy fish sprinkled around the dish too.  It was simply amazing. 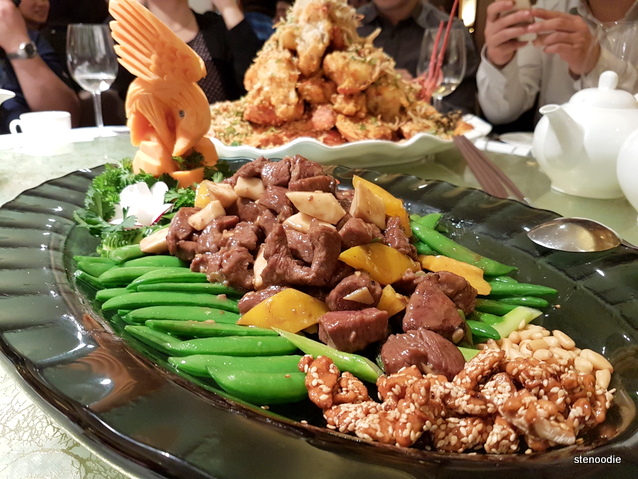 The Stir-Fried Beef Sirloin Cubes in Maggi Sauce was impressive due to its presentation as well.  The stir-fried beef sirloin cubes arrived on a plate where an eagle was carved out of a carrot!  There were also veggies and pine nuts and cashews.  I didn’t get to try any of the pine nuts or walnuts though since by the time the plate rolled around to our side of the table, it was all gone.  I really adored the stir-fried beef sirloin cubes.  These were so tender and well cooked! 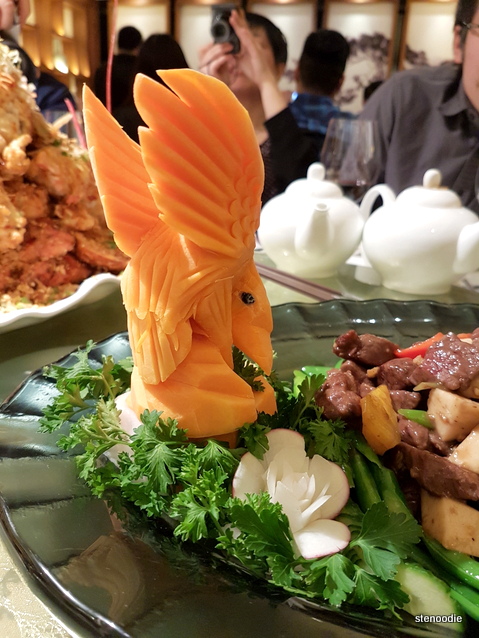 The last of the main courses ended off with the delivery of the Stir-Fried Pea Sprouts with Roasted Garlic.  These snow pea sprouts were also made expertly and didn’t taste rough or chewy at all.  They were fresh and “young” pea sprouts that tasted so good. 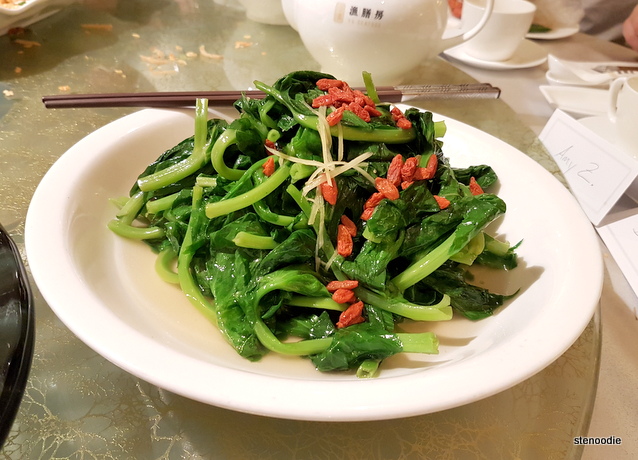 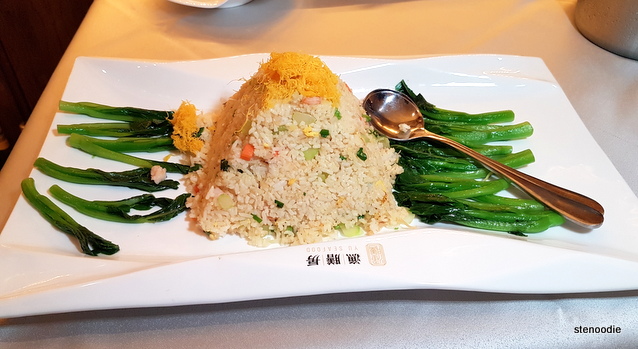 Very lastly, we also received a fruit platter as dessert to finish off the epic meal.  What a beautiful floral setup of the fruits! 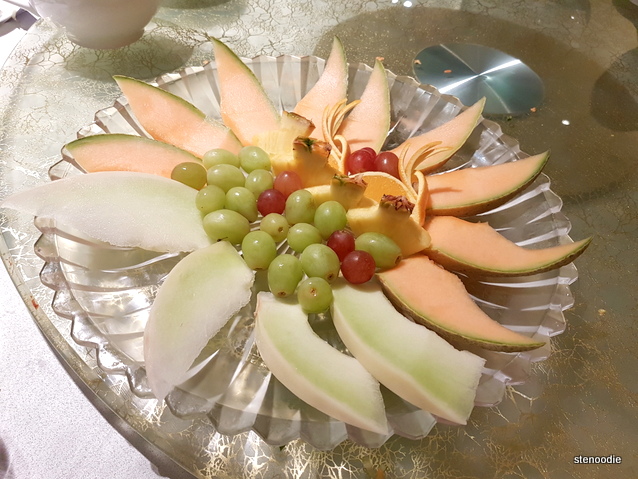 And with that, we were sent home with a dim sum voucher to return to Yu Seafood to enjoy actual dim sum since we didn’t get to for this “Moonlight Dim Sum” event.  I’m sure no one complained that we didn’t get dim sum though because what we did get to eat was even better than dim sum.  Haha. 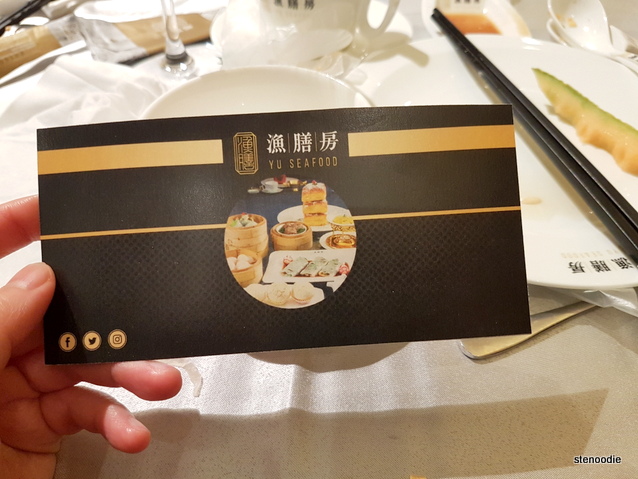 Thank you to Yelp for inviting me and allowing me to try the dinner service at Yu Seafood!  It was a wonderful delicious event that was very well organized and I appreciated the individuals who put it all together.  Until next time! 🙂 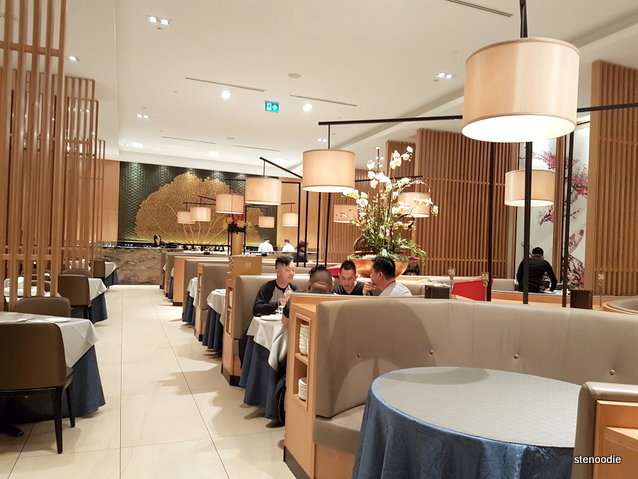 It was gorgeous inside the restaurant! 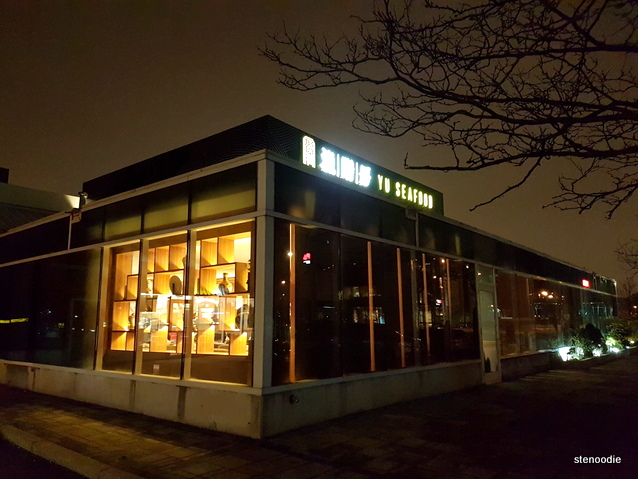 This used to be Wasabi restaurant; Yu Seafood has opened for about a year or so

FTC Disclaimer:  Although Yelp and Yu Seafood invited me to a complimentary tasting, the opinions expressed here represent my own and not those of the companies.