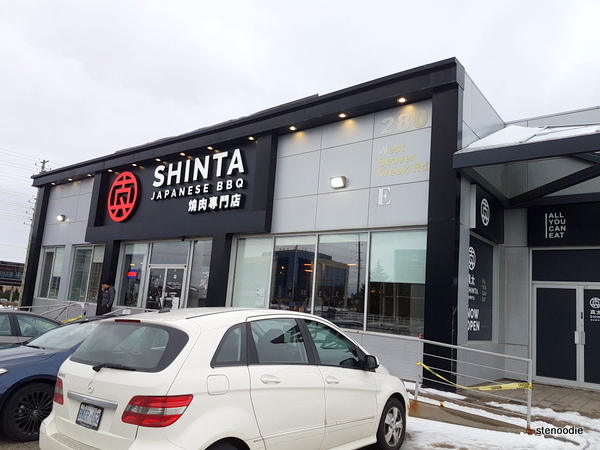 April 18, 2018:  In April, I had the opportunity to dine at a new all-you-can-eat Japanese BBQ restaurant called Shinta Japanese BBQ.  I had seen influencers post about this place on Instagram and had seen a so-called line-up to get into their restaurant during their promotional event and I was curious about the restaurant’s food.

It just so happened that a representative from an advertising agency reached out to me along with some other Yelp Elite members and invited us for a complimentary meal to review and critique this new restaurant.  I was open to attend the tasting and definitely interested since I knew for sure Shinta Japanese BBQ wasn’t a restaurant I would choose of my own regard as per my preference for less meat-focused meals nowadays.

Our tasting was slated for a 6:30 p.m. start time.  I arrived at the Jubilee Square where other restaurants such as Yu Seafood, Gourmet Vegetarian, Golden Court Abalone, and Jim Chai Kee Noodle were.  Shinta had taken over a previous seafood restaurant called Crab Harbour.  I had never dined at Crab Harbour before but knew it as a high-end restaurant (serving crabs for sure) and which had a huge plastic crab as a decor outside its restaurant.  It was something I noticed every time I drove along Highway 7. 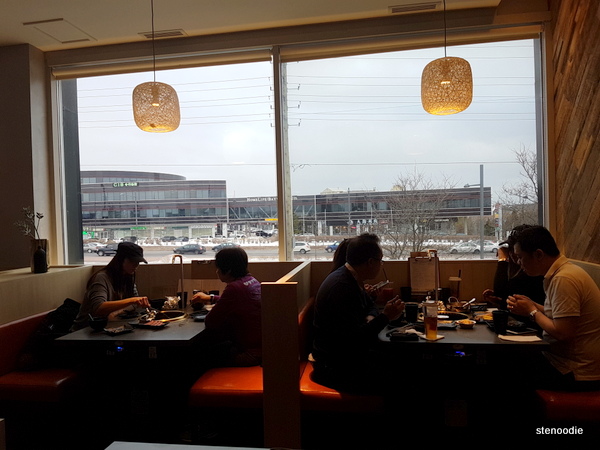 When I entered Shinta Japanese BBQ, I explained to the hostess that I was there for a tasting as part of a Yelp Elite group and spoke of the organizer’s name.  (Walking in, I also recognized the chef of the shuttered Game of Cheese restaurant walk by.)  I was led to an inner room where I sat with a fellow Yelp Elite member (and foodie whom I had met before) and the organizer herself.  We chatted a little bit in the booth before we were actually led to a bigger table for eight people where the tasting would be held.

We did some introductions around the table and the organizer briefly explained that we were there to review the food and give critiques of their restaurant.  By that point, I believe Shinta had been open for about a month. 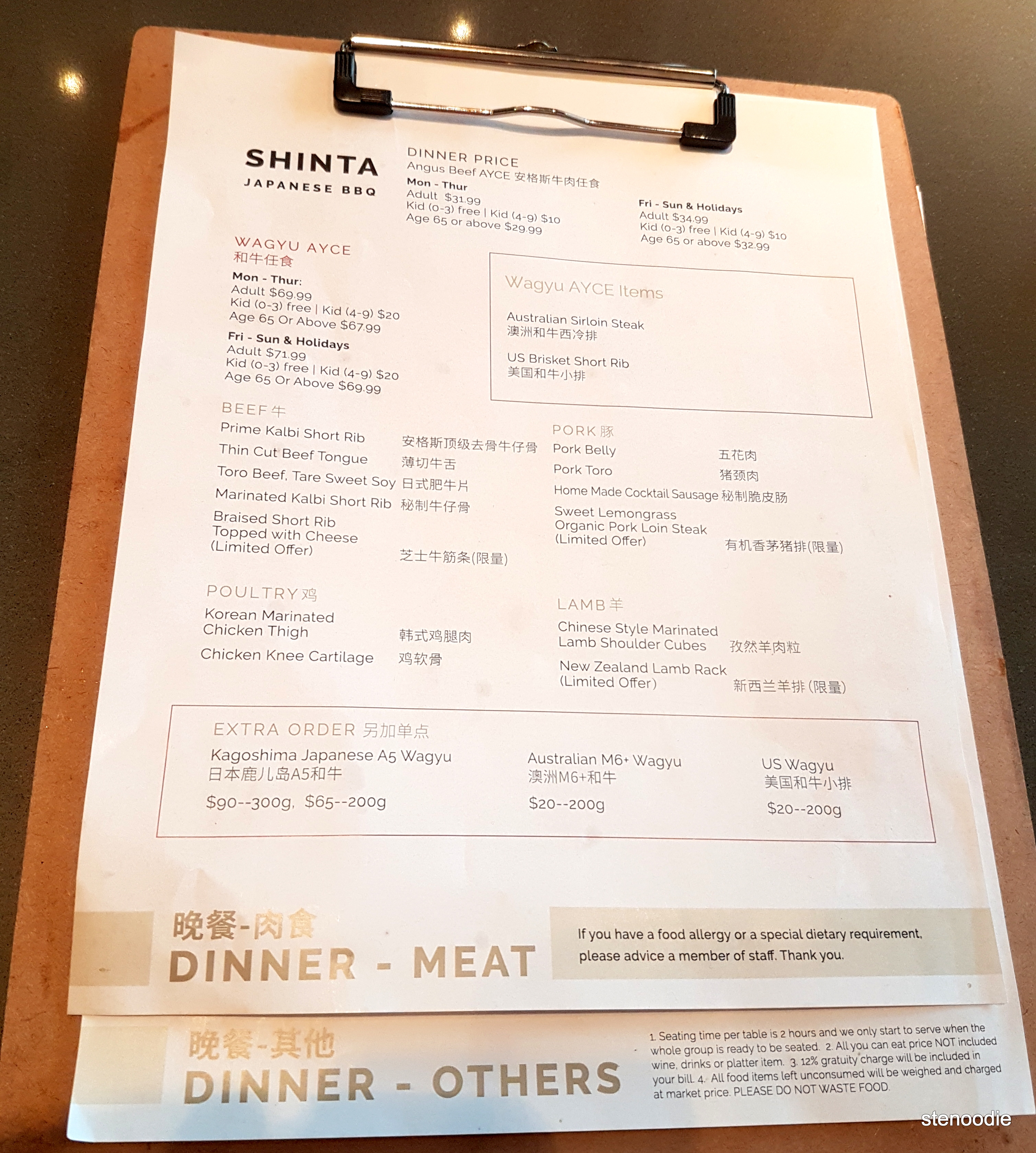 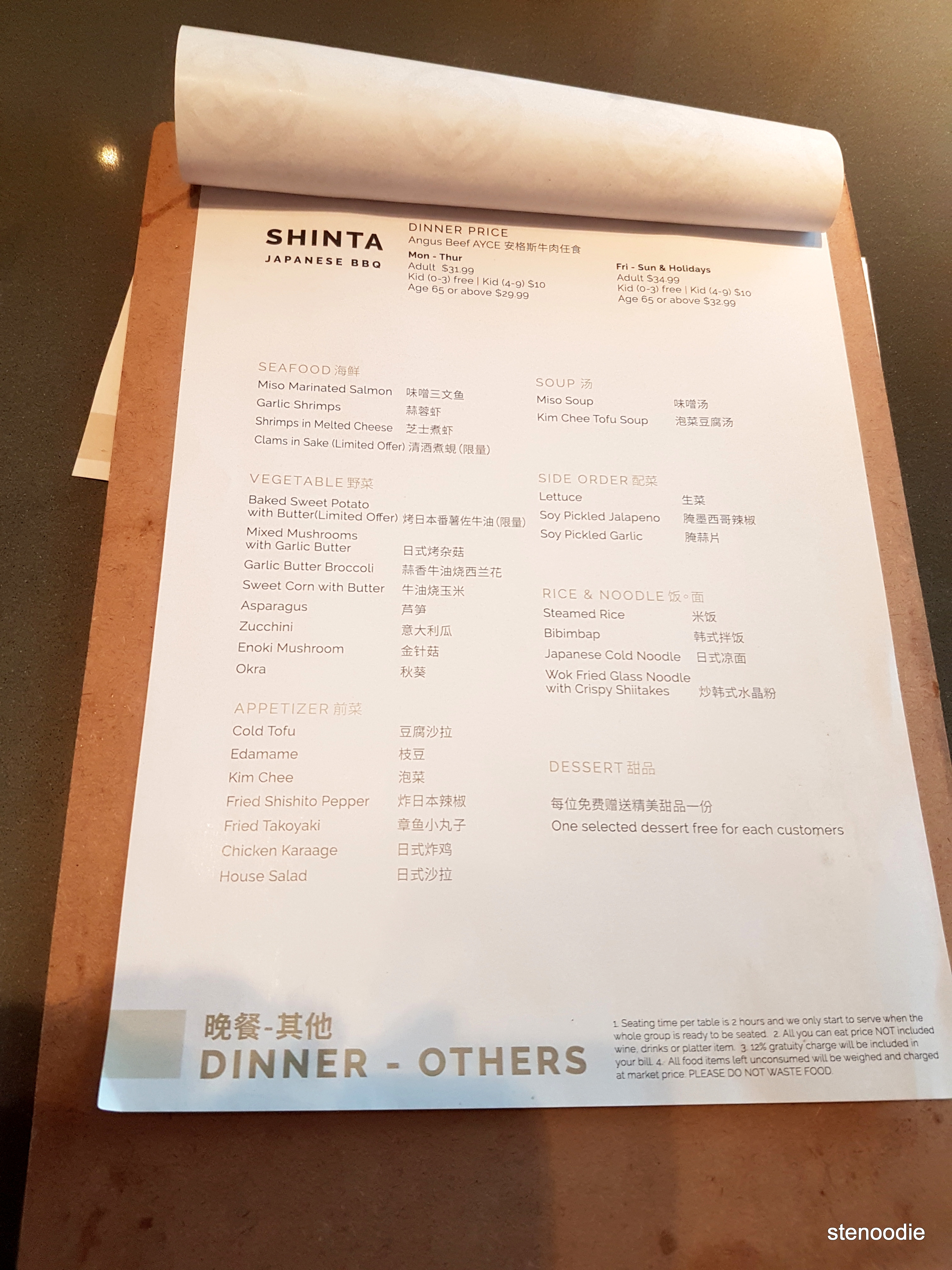 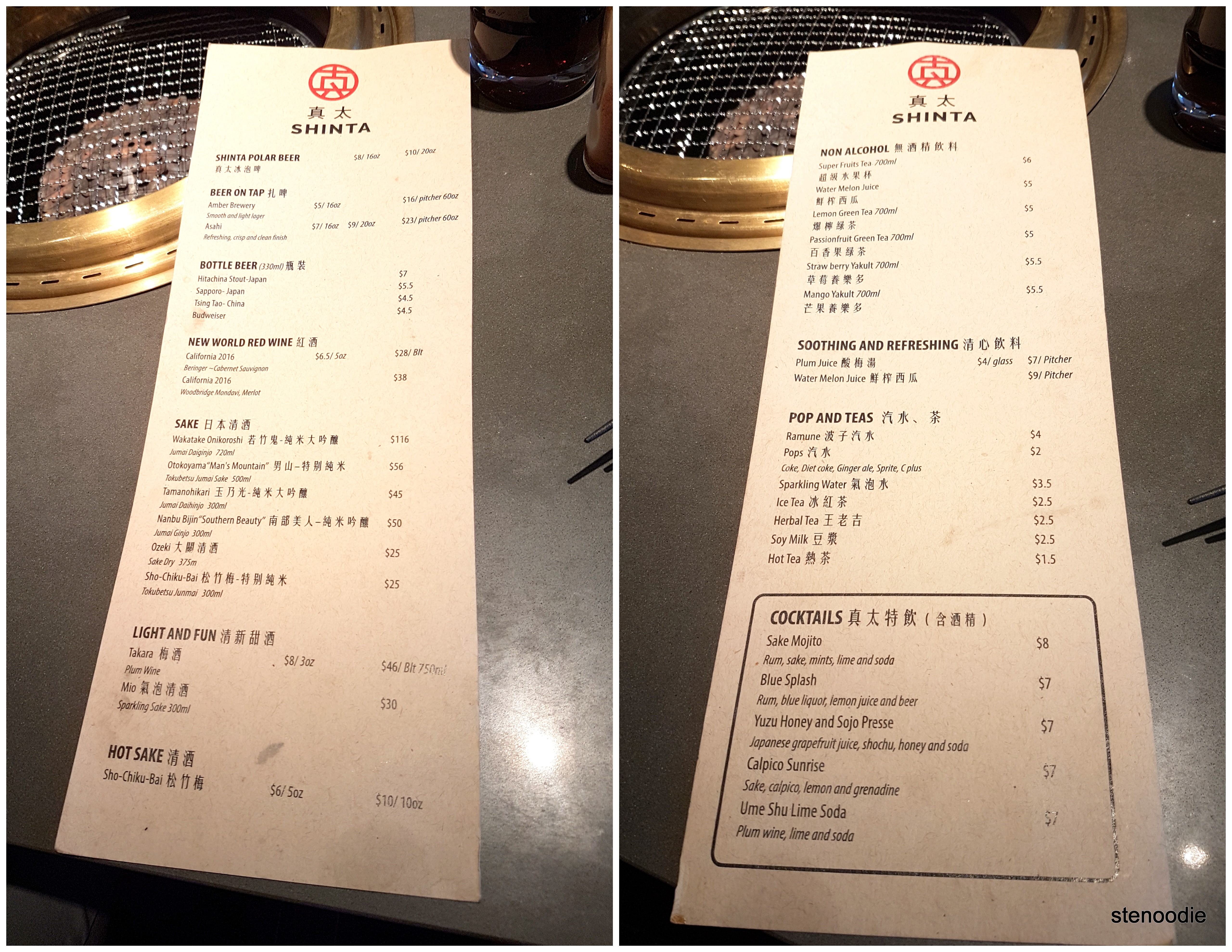 We were able to order any drink we wanted off of their drinks menu.  I chose the Shinta Polar Beer as it was always something that I had wanted to try (ever since seeing it on the menu from Donburi).  There were other cocktails and drinks that were recommended to us.  The Polar Beer was a nice tall glass of beer with some “foam” on the top of it that appeared “wintry” in tune with its namesake. 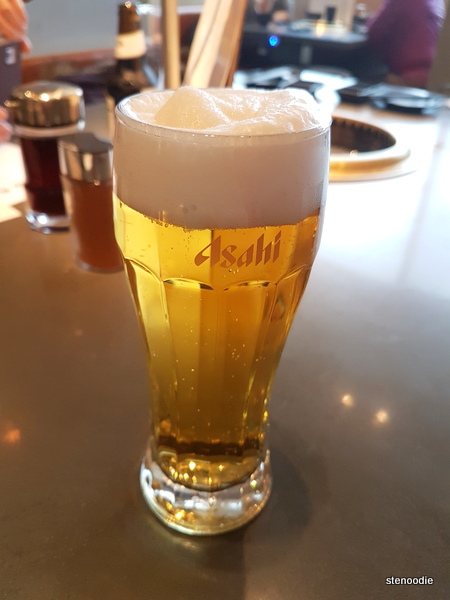 That night, we had five Yelp Elite members (including myself) who participated in the tasting.  We had two grills on the table including an interesting fire extinguisher-type tube attached to each of the grills that I had never seen before at other BBQ restaurants.  The organizer explained that the fire department deemed it a necessary installment in the event of emergencies.

Relatively small grill on the table

That night, we tried a number of meats and dishes that they had on the menu.  Shinta is a restaurant for Angus Beef all-you-can-eat and they also had a menu for all-you-can-eat Wagyu too.  On my very first trip to Japan back in 2007, I remember having eaten kobe and wagyu beef.  Japanese Wagyu A5 beef is supposed to be high quality in that when you eat it, it melts in your mouth because it is so soft and fatty.

Unlike another Japanese BBQ restaurant (Gyu-Kaku Japanese restaurant), Shinta doesn’t have any rules or guidelines about how long the raw meats or seafood should be cooked for. 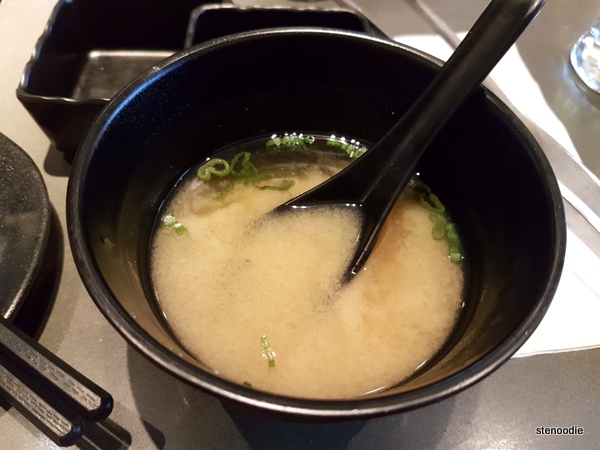 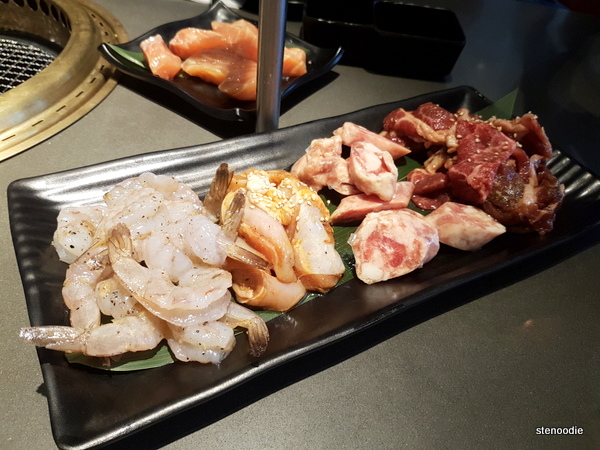 That night was a really good opportunity to be able to try out most of the items on their menu.  The highlight of the night was the Australian M6 Wagyu beef which was so tender and had a great texture.  The U.S. Wagyu was so-so and more fatty than the rest.  It seemed like there were two different cuts of it and I definitely liked one cut more than the other. 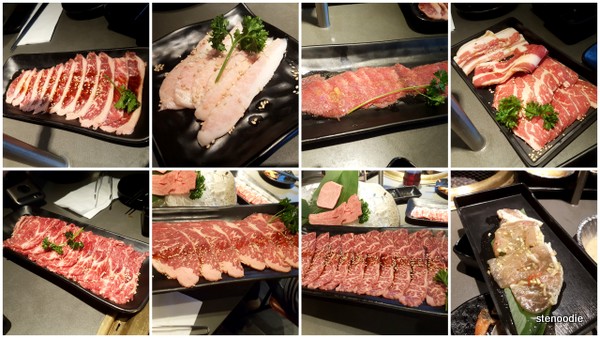 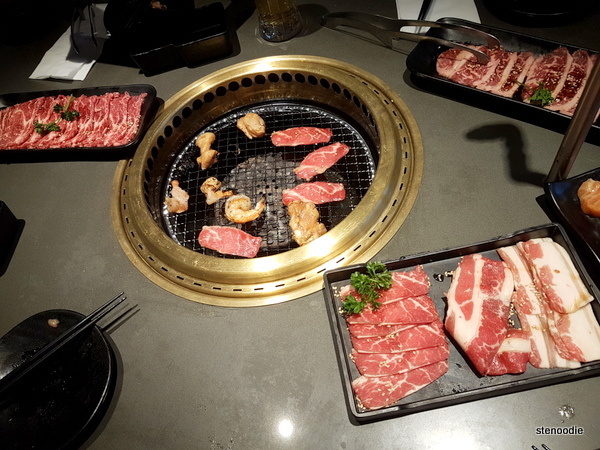 We had so much meat 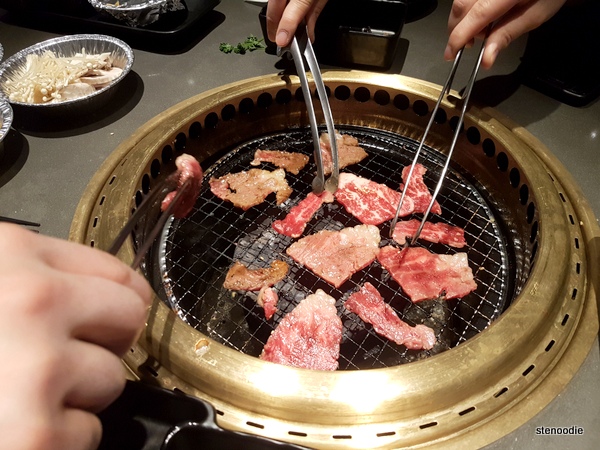 The grill had to be changed frequently

The highlight of our night was a platter of Kagoshima Japanese A5 Wagyu beef.  We were presented with some thick cubed pieces as well as some thinner pieces. 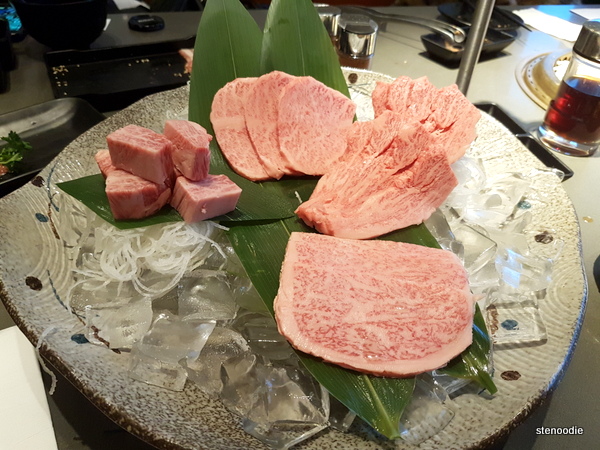 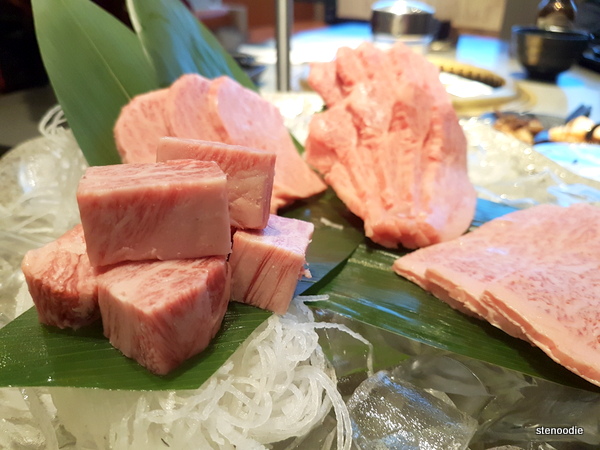 The cubed ones were so good

Grilling the A5 Wagyu beef

I liked the cubed Wagyu A5 beef more than the slices.  It definitely was very, very fatty and marbled such that it did seem to melt in my mouth after a few chews.  It was nice but also quite indulgent.  Many of us agreed that we wouldn’t be able to take much advantage of an AYCE style of Japanese A5 Wagyu beef if given the choice since it was heavier and more decadent than regular cuts of beef.

My second drink, a cocktail, was so strong in alcohol taste!  Ume Shu Lime Soda: 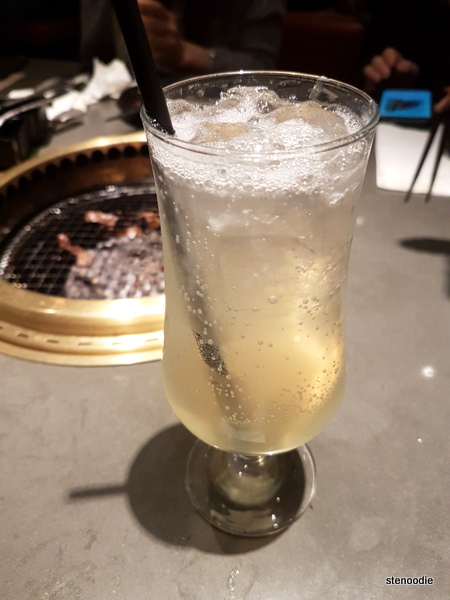 The Fried Takoyaki was okay. 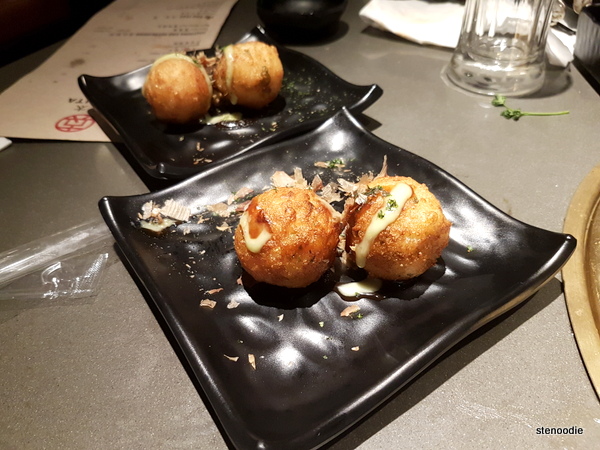 The New Zealand Lamb Rack was laborious to cook because it was so thick-cut but very delicious. 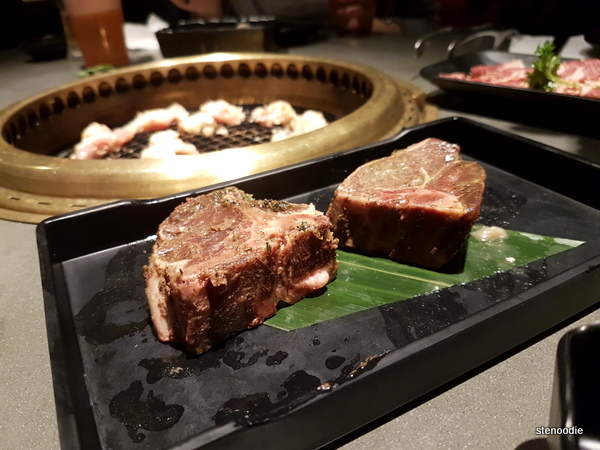 The Shrimps in Melted Cheese, Sweet Corn with Butter, Enoki Mushroom, and Braised Short Rib topped with Cheese were all served in individual tin foil containers to be placed directly on the grill. 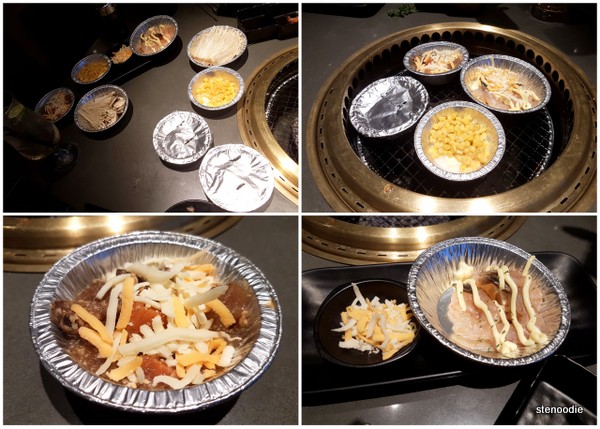 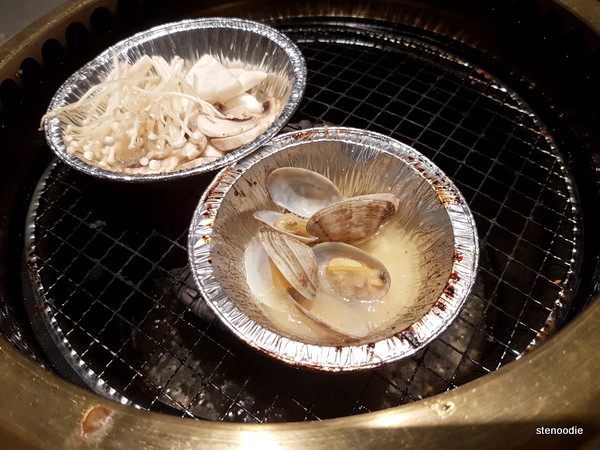 The Clams in Sake was delicious

That night, we had to ask the servers to change the mesh grill up for us every so often due to the charred meat sticking onto the grills.  We learned that the mesh grills were imported from China and thrown away after each use. 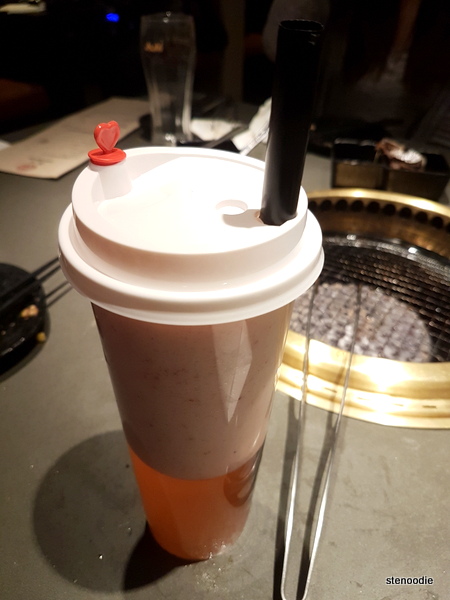 At the end of the night, we gave our critiques and opinions to the organizer who also called over the manager to hear what we had to say.  When it came to the one-time use containers, the answer was that she agreed wholeheartedly with our opinions that it was a wasteful practice but yet it was something that was not in her control.  …

These Baked Sweet Potatoes were said to be a huge hit so the owner ordered these up for us before we left. 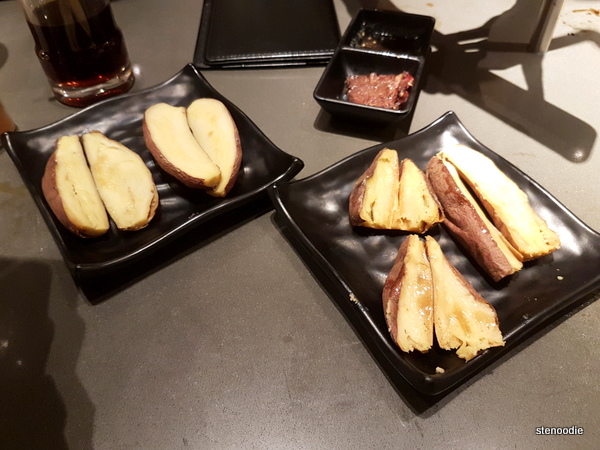 We each got one Melona Bar as dessert at the end of the night.  I opted out of getting one for myself since I was already so full. 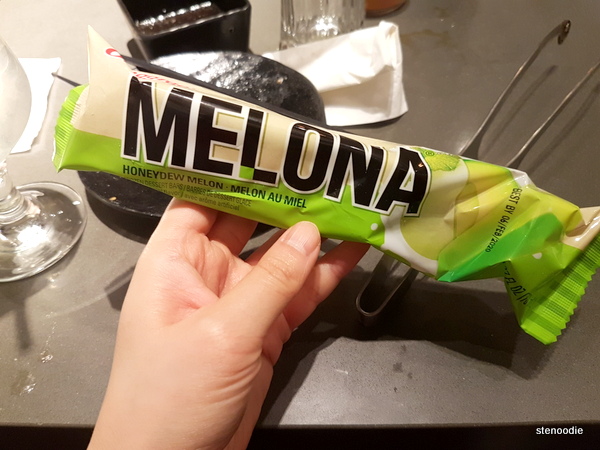 By the time we left, it was 11 p.m.  I couldn’t believe that we had spent five hours at this tasting.  Five hours!!

This was one of the most stress-free and enjoyable group tastings I’ve ever been to.  We were able to leisurely enjoy the food as it arrived — no one had to take time away from eating food to photograph it (which is so refreshing these days).  All five of us ate so well together and had really good conversation too.  It was a really warm and comfortable setting.

Thank you Shinta Japanese BBQ for having us for the tasting dinner! 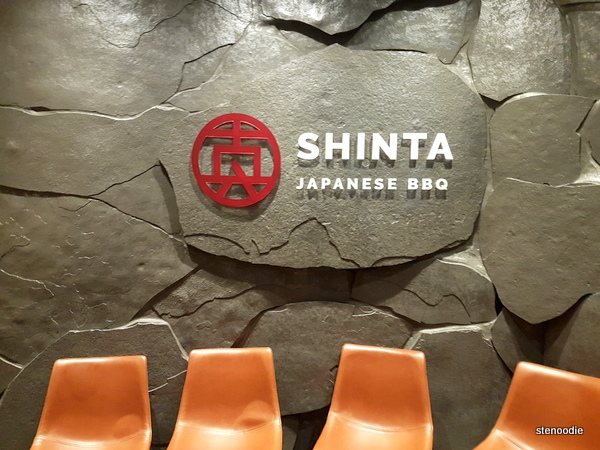 The logo is made from the overlap of two Chinese characters, “zun tai”

FTC Disclaimer:  Although NTH Group and Shinta Japanese BBQ invited me to a complimentary tasting, the opinions expressed here represent my own and not those of the companies.