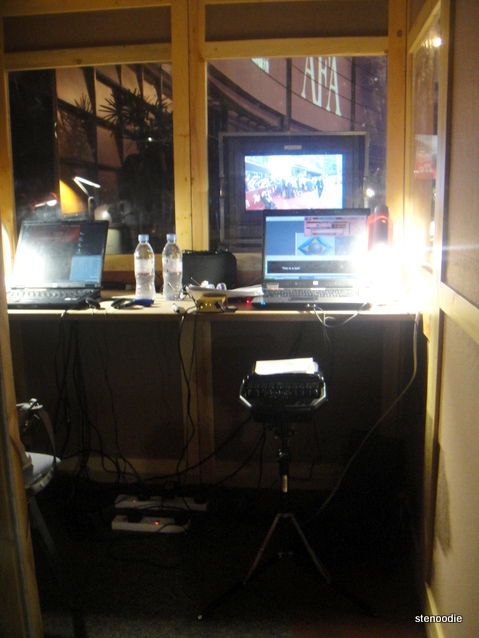 I don’t think I’ve had too many surprises in my life before but one that I can think of is this one back in 2013:  I was in Hong Kong and joining steno superstar Jade King to shadow/follow her as she did the live captioning of the 7th annual Asian Film Awards at the Hong Kong Convention and Exhibition Centre in Wan Chai.  Jade had previously done this job before 2013 and when she blogged about it, she included photos of the private booth that she had that overlooked the stage as the place where she would been captioning the award show live.  Thus, since I had seen these photos on her blog post, I kind of had this expectation in mind that that was where we were going to be when I was staying with her during the duration of the award show.

To our surprise, when we got there that day, we found out that not only would we not be situated in that swanky and snazzy private booth for the captioning but that we would be on the floor of the award show near the sound guys and in a wooden box constructed solely for the purpose of her captioning.  This was an immense surprise that neither of us saw coming.

(You can read the full blog post of that unique experience here.)

Fast forward to now, Jade has been in many other wooden boxes thus when completing her steno work.  She’s used to it by now.  But I am sure that we were both surprised when we found out that this was what we were going to be sitting during the duration of the show.  Jade can tell you all about the duct tape that becomes helpful when you close the door of the wooden box in order to keep the outside sound out and also the mini portable air vent that helps to circulate the air within the wooden box.

I'm a stenographer, foodie, avid traveller, and new mom who loves to share her experiences with the world.
View all posts by stenoodie →
This entry was posted in Weekly Photo Challenge and tagged captioning, Hong Kong film awards, postaday, sitting in a wooden shed, Surprise, weekly photo challenge. Bookmark the permalink.