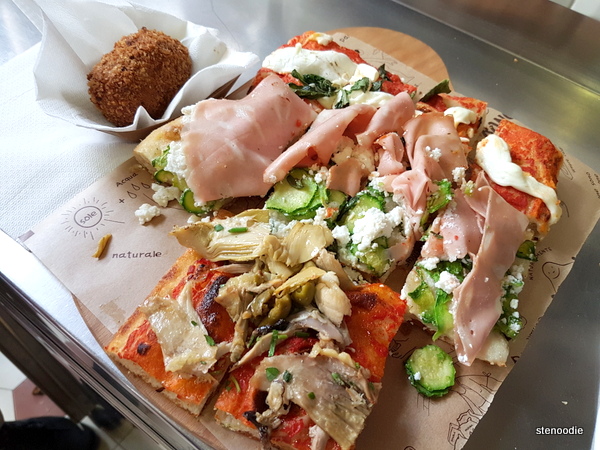 September 3, 2018:  Our first meal in Italy!!  After dropping our bags off at our Airbnb, we went to the nearest pizza joint that was open!  (This pizza joint popped up on my Google map search for restaurants within our Airbnb area and was one of the only places still open for lunch at around 1 p.m.)

It was called “Bonci Pizzarium” or simply “Pizzarium”.  It’s a small shop that serves mostly take-out orders.  They do have a few standing tables and a bench outside, but the space is very limited because they are so busy with customers.  Upon arriving, I saw that a number system was in place so we immediately took a number from one of those machines (the ones you see at deli places) and waited for our turn. 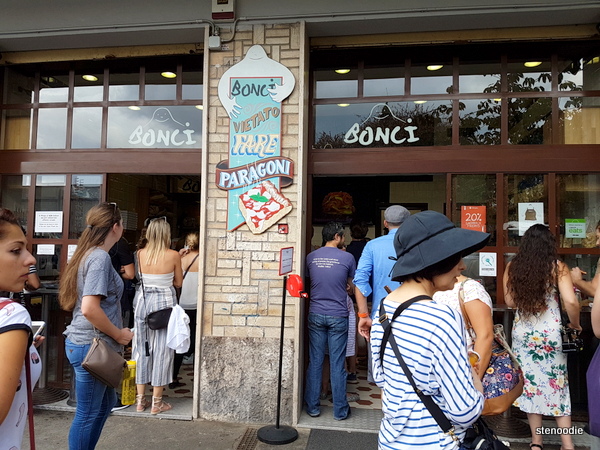 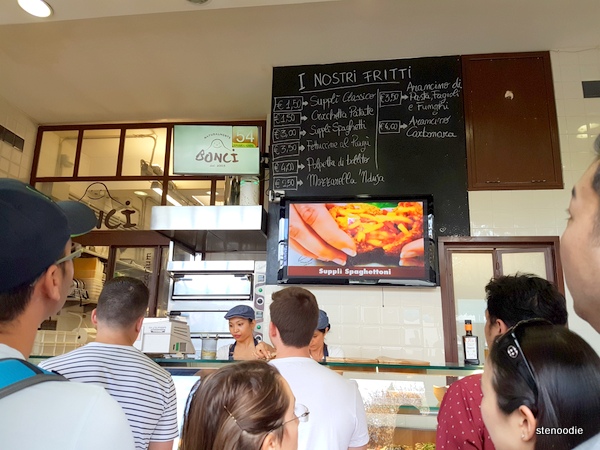 A changing menu shows the fritti available that day

Upon seeing the other customers place their orders and the layout of the restaurant, I recognized this place as one of the top recommended pizza stops on one of the travel videos we had watched while researching for Rome!  Who knew that we were coincidentally here to eat the pizza?  It was awesome. 😀

While waiting in line, I observed how others were ordering the pizza.  All of the pizzas were put out in the display box and were charged by weight.  You could choose the type of pizza and the size.  Thus, this meant that you could order as much or as little pizza as you wanted.  It was a really neat concept!  The staff would use scissors to cut the size of the slices that you wanted. 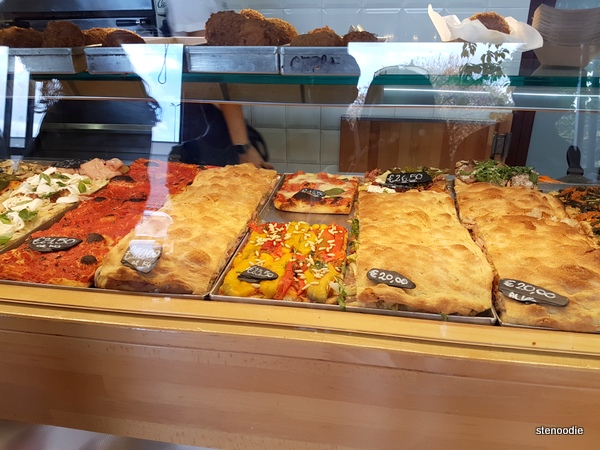 The pizzas that were available to us at that time 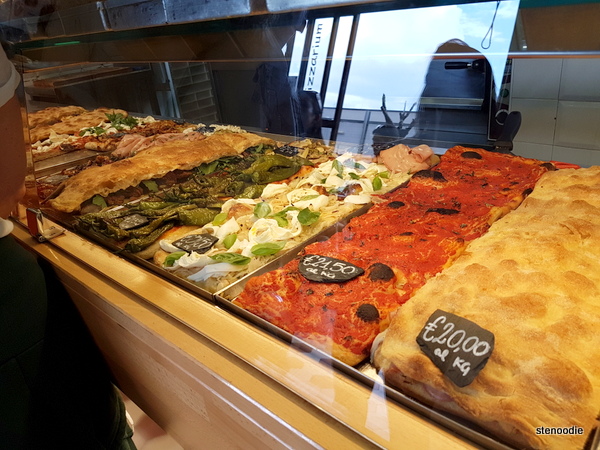 As the supply diminished, new pizzas were brought out! 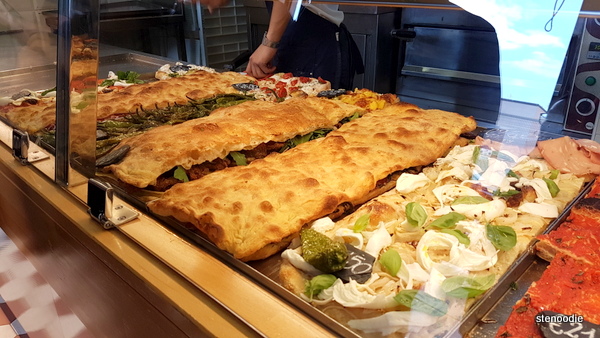 We didn’t try these “covered” pizzas that day 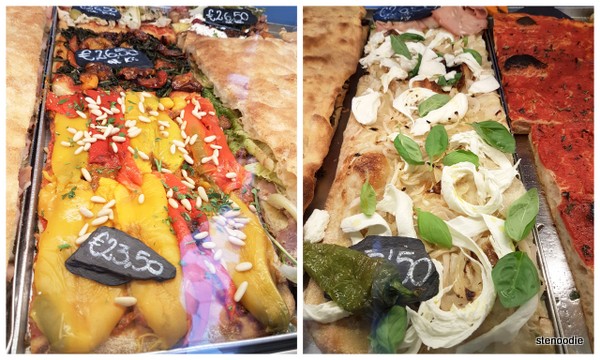 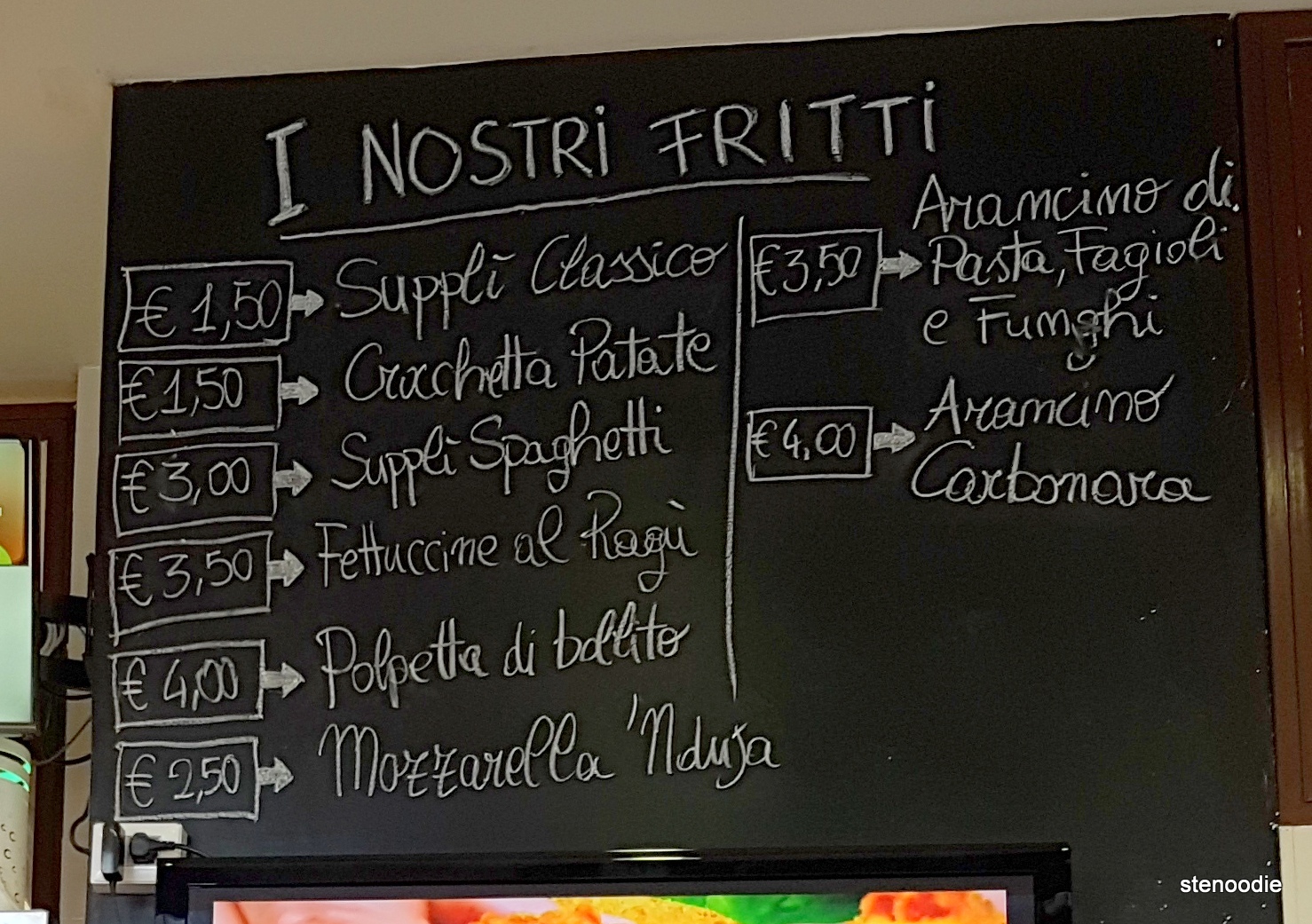 We were so busy admiring the pizzas and watching how others were ordering that it didn’t take long for our number to be called at all.  It was a really fast and efficient process that the staff had in place. 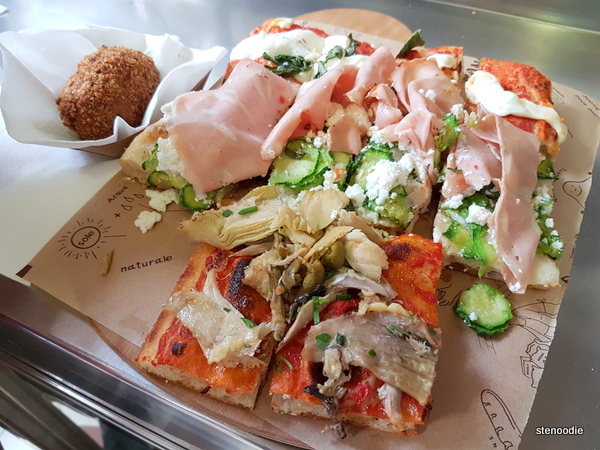 Three types of pizza. (by weight came out to be €15,19)
-mozzarella basil, mortadella ham, artichoke

We ordered three types of pizza:  the mozzarella basil, mortadella ham, and artichoke, along with a Suppli (fried ball with rice or spaghetti or cheese inside — there were so many varieties of the filling!)

We asked to dine in (so that our pizza was heated and given to us on a wooden board.  Otherwise, they would have packed it up for us in a box).  After we ordered, we paid at the cashier.  It was only a matter of minutes before our pizzas were heated up in the oven and served to us.

As I said, there were no seats or tables here.  There were only two counters available for standing for dine-in.  Luckily, we were able to get a table to eat our pizzas.

We enjoyed these pizzas so much!  The crust was so crunchy (which must be why one of their slogans was “In crust we trust”) and more of a foccocia bread than North American style pizza crust.  All of the pizzas were rectangular shaped.  Unlike North American pizza, the toppings were simply placed on top of the pizza and not baked in at all.  It really was a big difference in terms of freshness and quality of ingredients.

I really like the mortadella one since the meat was so thinly sliced and not heavy or salty at all.  It was so good! 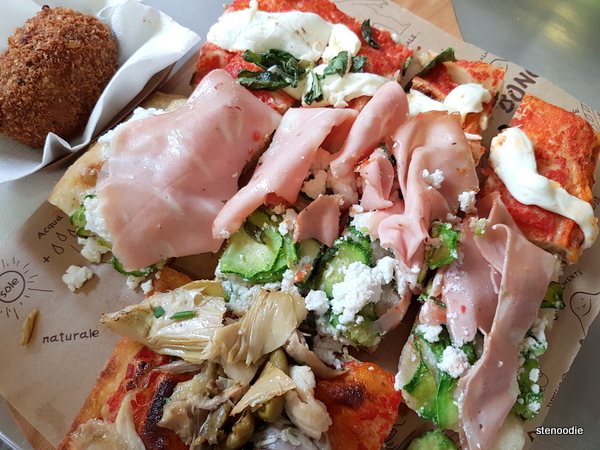 The mortadella ham was to die for

The mozzarella was divine.  It was so chewy!  The tomato sauce was great and light as well.

Ken enjoyed the artichoke one the most.  He liked how it was the most savory out of the three. 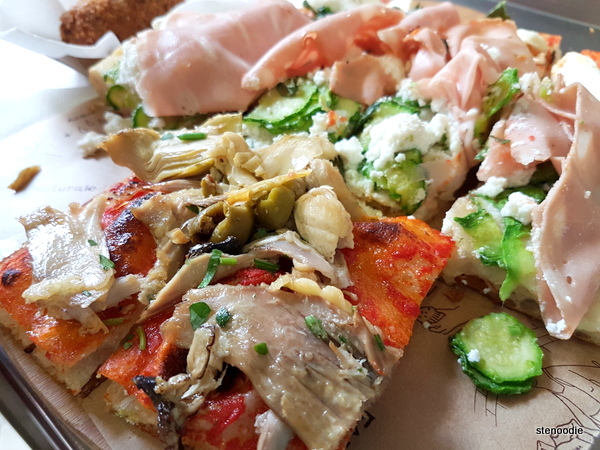 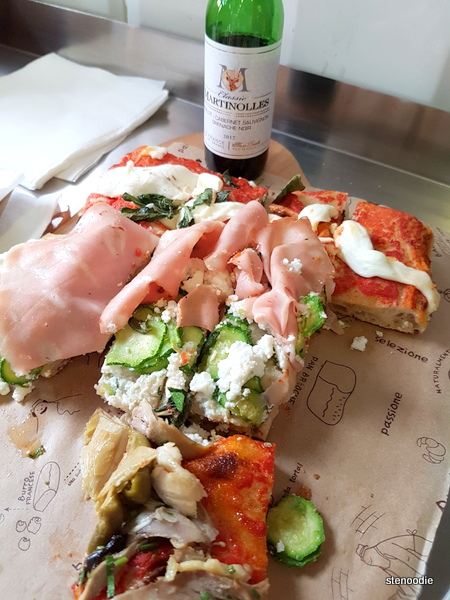 I chose the Suppli with spaghetti inside of it (which I believe is a classic choice).  It was so crispy on the outside.  When I broke it apart, the spaghetti oozed out.  There was a lot of it too.  We didn’t even finish it all right away since we were so full already from the previous slices of pizza. 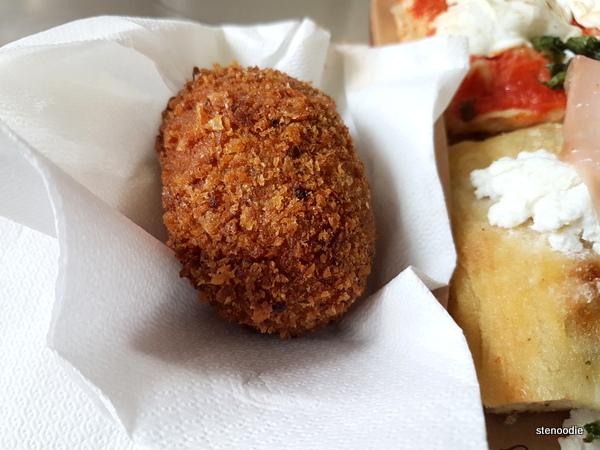 Suppli. €3
-with spaghetti inside 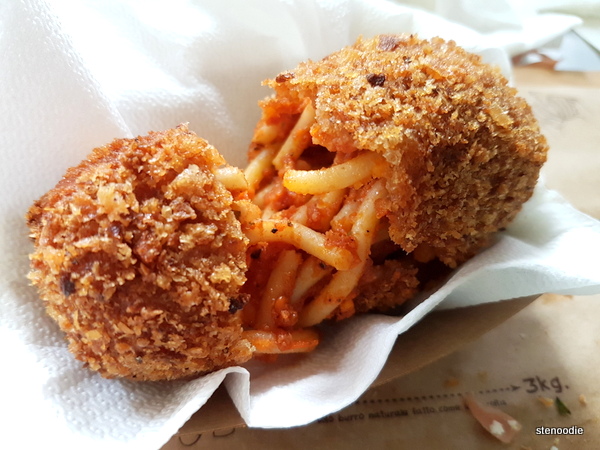 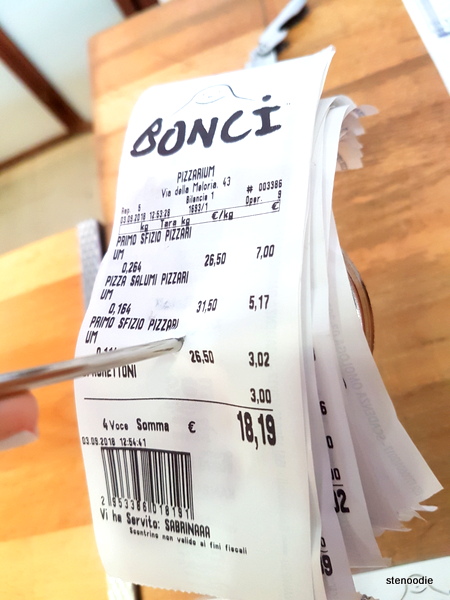 Our damage for lunch (but not really)

(Tip:  Order small halves of all the pizzas.  This way, you can definitely try more varieties!  They come out with a lot of different varieties of pizza as each one runs out.  [Even as we finished eating and left, they had already come up with a few new varieties of pizzas!]  We could have definitely come back to try more on a second visit! :))

(Bonci Pizzarium is a must-visit if you are in this part of Rome.  The pizza was so reasonably priced [only €18,19 for two of us], filled us up so much, and was incredibly delicious.  This was the best pizza we had on our whole trip.  I believe it was because the ingredients were so fresh!  We were super lucky that this pizza joint was only two minutes away from where we stayed at too!)