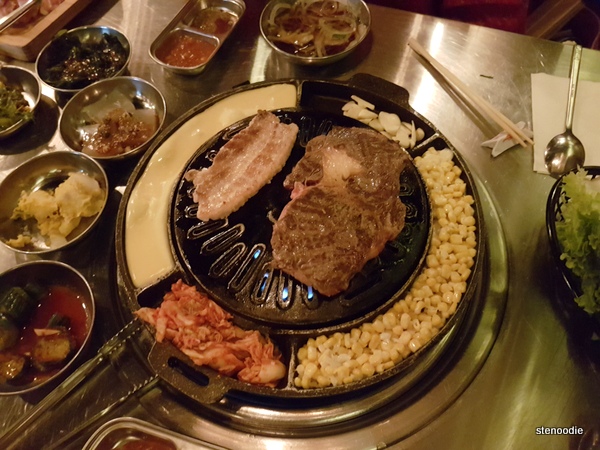 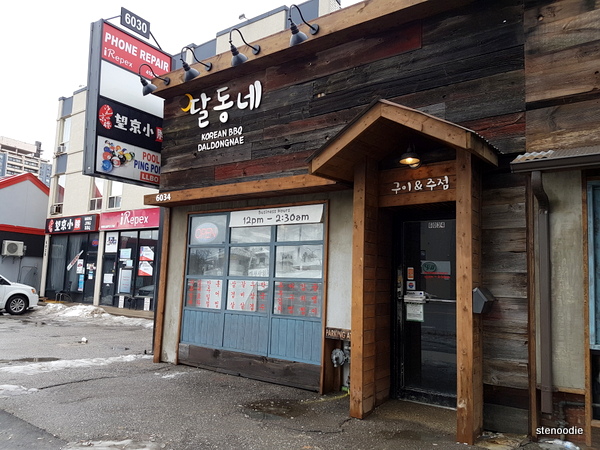 This is the storefront (parking in the back)

This restaurant has very good ratings online and as they don’t take reservations, I wanted to make sure that we had a table when we arrived for the Sunday lunch.  We found out that they open at noon, so we arrived promptly to be one of the first customers to get a table (with the hope of not having to wait for a table).

We initially had some trouble finding their onsite parking (I mistakenly thought it was acceptable to park in the few spots next to the store but that is not theirs), so upon consulting the staff, we found out their designated customer parking spots are located just behind the restaurant (you have to watch out for a little black sign that has the name of the restaurant on it). 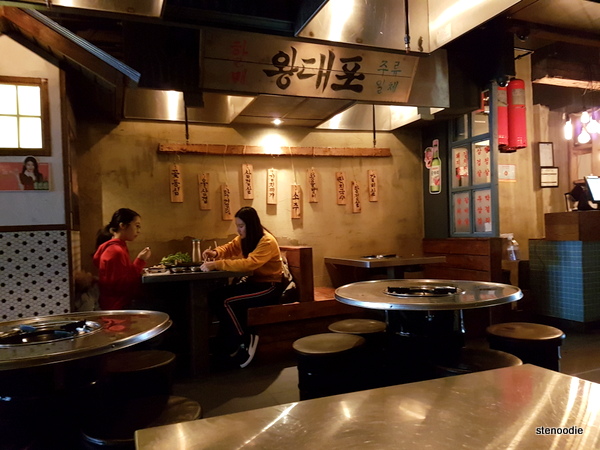 The interior is reminiscent of Korean old-style restaurants

After we parked our vehicles successfully and entered the restaurant, I was pleased to see that we got a table easily.  The restaurant was a bit dim in some areas (especially where we were sitting), but the atmosphere was like we were at an authentic Korean restaurant.  They have a lot of tables actually and wasn’t busy at all on this Sunday.  Perhaps customers tend to fill the place for the dinner service instead.

Their menu is straight forward with a selection of various pork and beef cuts for the grill, several hot items, and drinks.  As is common with most Korean barbecue restaurants, the grill items usually require a minimum order of two.  Thus, we ordered two sets of pork belly and two sets of beef ribeye roll.  We also got an order of their Seafood Pancake. 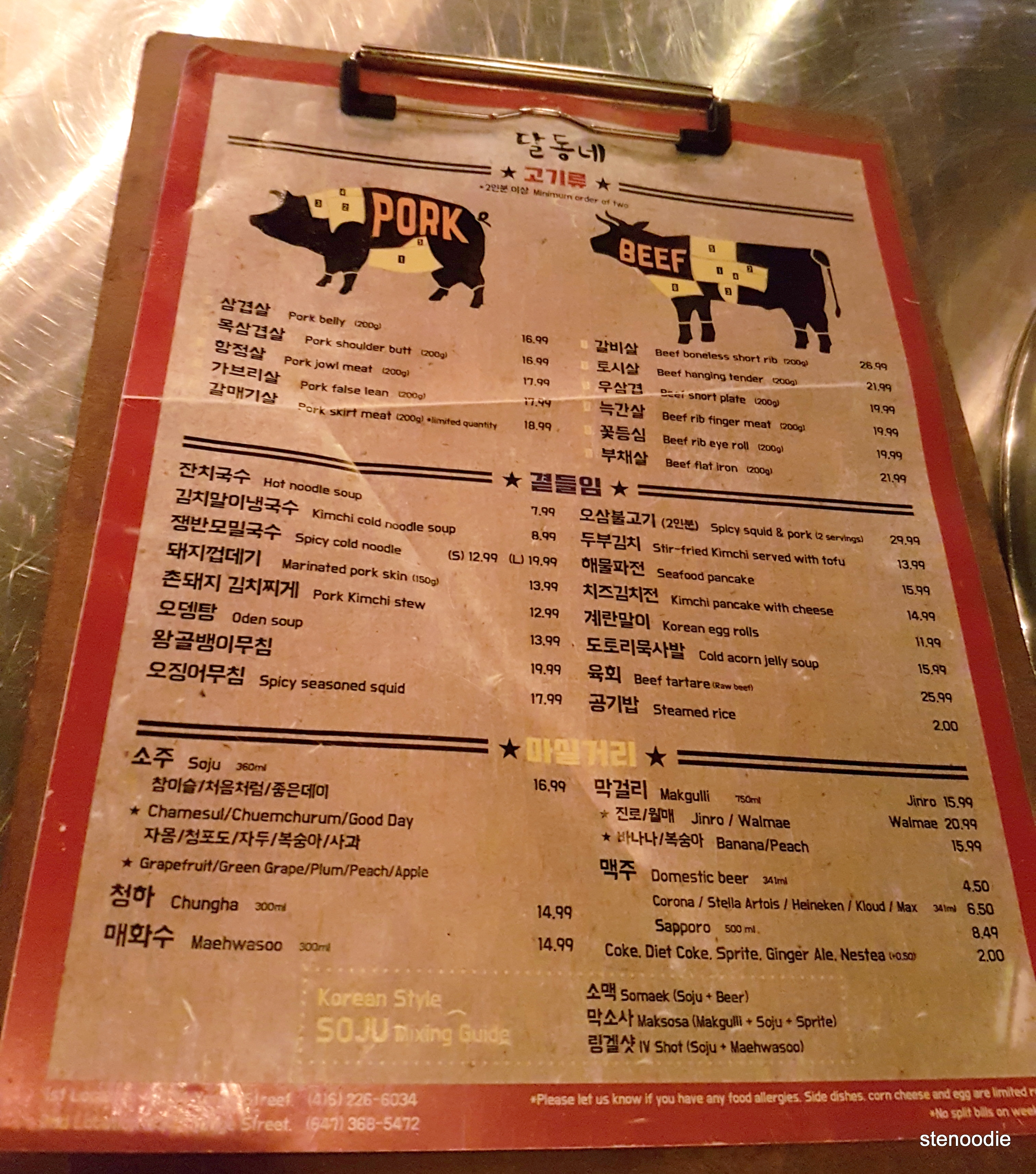 The service here was phenomenal.  Both servers who attended to us were very friendly and attentive (they came around to assist us even with the slightest eye contact).

The perimeter of the grill on the table was fitted with sections for (liquid) egg, kimchi, corn, and garlic.  The liquid egg that was poured turned into a smooth omelette that we all really enjoyed.  (I had read online that the egg and corn used to be of unlimited quantity but due to some people abusing the system, the restaurant no longer offered refills for those.)  It’s best to eat these four items sooner rather than later.  Since they’re directly on the grill, albeit on the perimeter, they tend to blacken and burn if left on it. 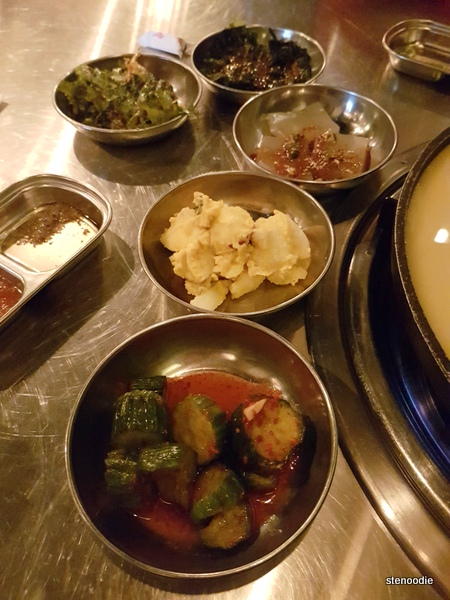 Five types of banchan for sharing

The middle section was left for the grilling of the meat (which was largely left to our own devices).  We were also served banchan, lettuce for the wrapping of the meats, individual plates of onion and vinegar for dipping, two sauces for each person, and a small vat of tofu soup to share.  The banchan included a potato/apple salad, seaweed, pickled spicy cucumber, two types of veggies, and a jello-like pudding.  These side dishes and condiments were all included with the order of the meat.  (We refilled on the side dishes once during our meal.)

The two portions of raw pork and beef arrived on a wooden board with two mushrooms and onion.  There was also a nub of fat, which the server used to grease up the grill to start us off. 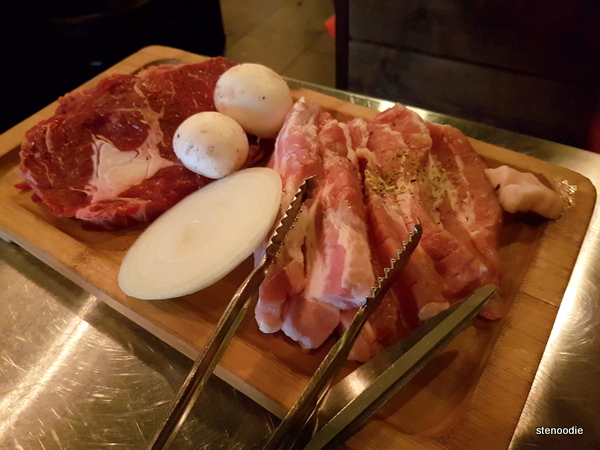 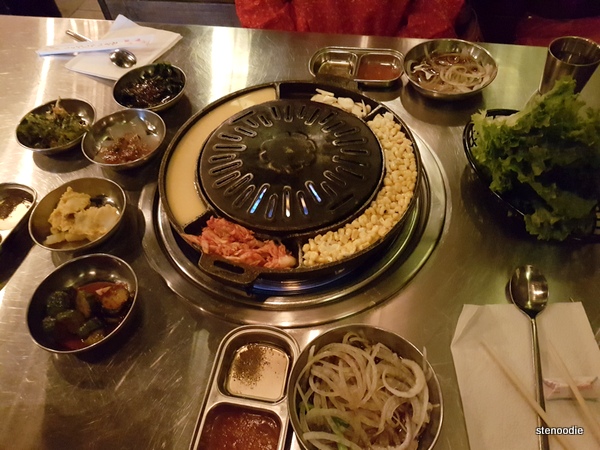 The two servings of both pork and beef were more than enough for us for this meal.  I really liked the fresh beef taste of the ribeye roll.  However, the entire cut of beef was a bit thick and chunkier than we would have liked, making it a bit difficult to ensure that it was cooked to a medium rare consistency yet be easy to chew at the same time.

The pork belly was easier to cook in comparison, but I thought that the pork was a bit dry for my taste when it was cooked thoroughly. 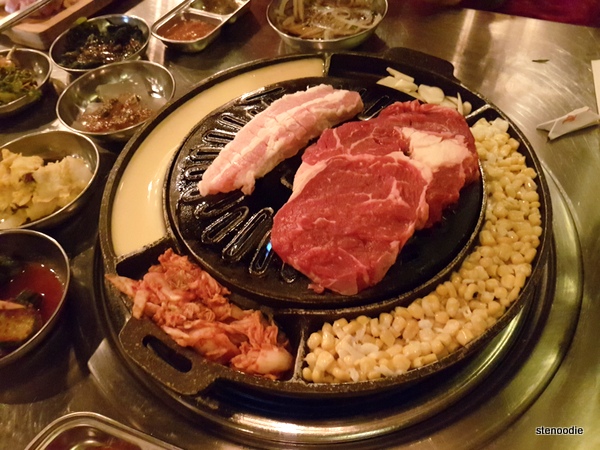 Pork belly and first piece of beef on the grill

There was a pair of tongs and scissors for you to cut up the meat when it was done on the grill. 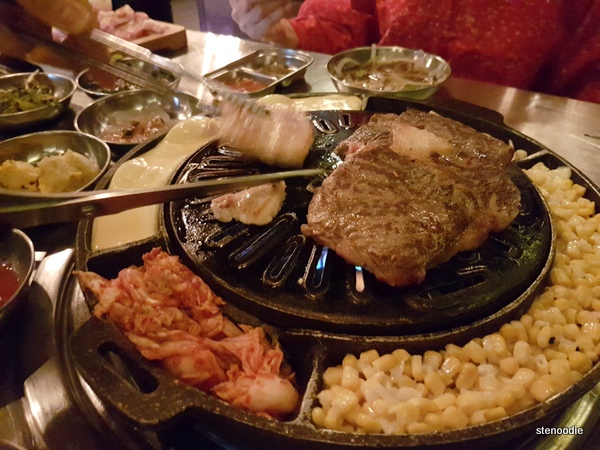 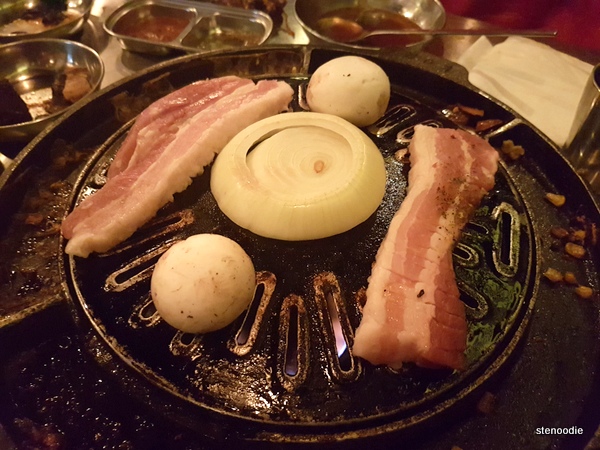 Mushrooms and onions are also great things to grill 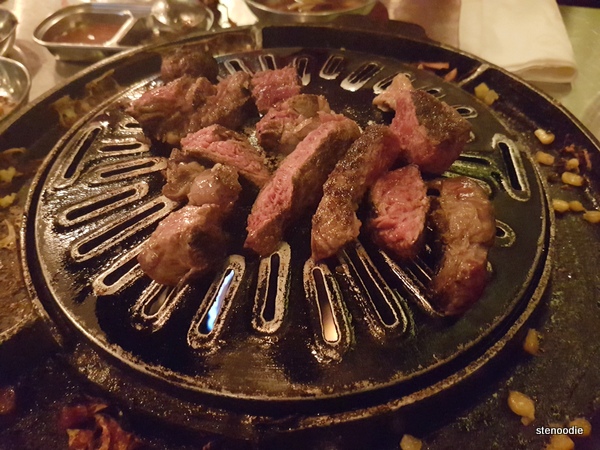 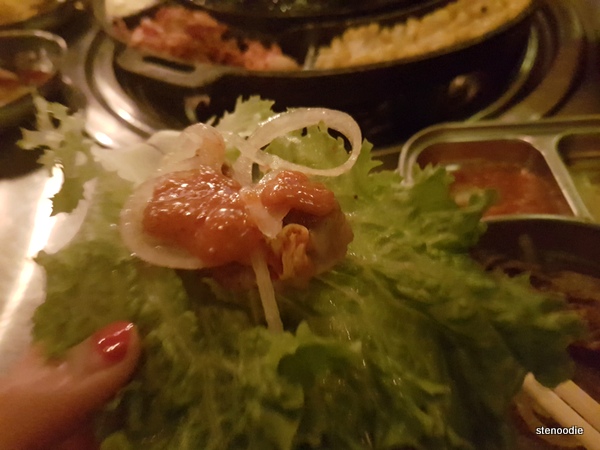 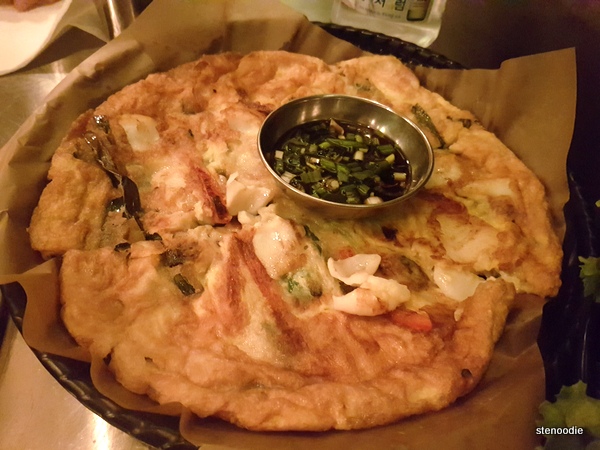 The Seafood Pancake was a large portion.  I found that the Seafood Pancake was more eggy and starchy and contained mostly pieces of squid (which was tender and delicious though) but didn’t really contain “seafood” as its name says.  Usually, Korean seafood pancakes would include shrimp in addition to squid.  This one was more like a squid pancake. XD

By the time we finished all the meats and the pancake, we were incredibly stuffed.  We had a birthday cake and I appreciated that the staff brought out the cake with lit candles on it and the corresponding plates and utensils too.  I really appreciated the kind service that we received.  During the course of the meal, we were also able to ask the servers to change the grill up too. 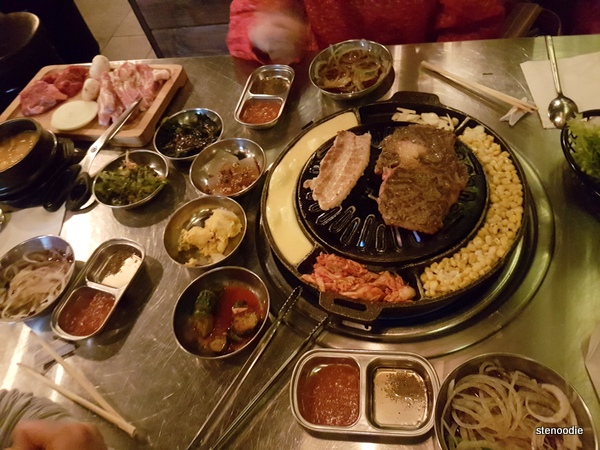 Our table full of good food

What are some good cuts of meat that you would recommend for Korean barbecue grilling?