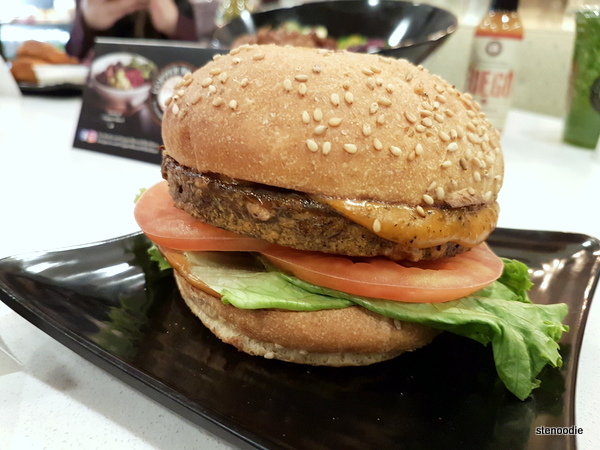 March 4, 2019:  A brand new vegan fast casual restaurant has opened up in the Downtown Markham area.  Copper Branch is actually a vegan franchise that has numerous locations across Ontario, Quebec, Edmonton, as well as the states and in France!  During this one-hour express Yelp Elite Event, we were invited to a sit-down sample style meal to try out what Copper Branch had to offer us.

I was really excited and looking forward to this.  I actually had known about this location of Copper Branch a few weeks ago and contemplated coming here for a meal but ultimately didn’t end up dining in. 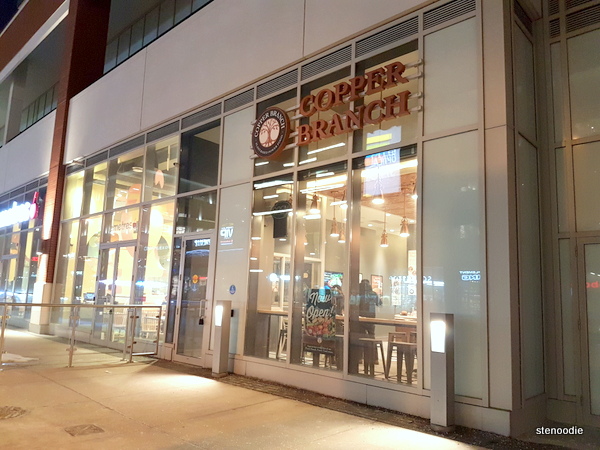 I arrived just before 7 p.m. for the event and there were other Yelp foodies who had arrived already.  Their store is located on the northeast corner of Enterprise Boulevard and Birchmount Road (right next to Demetres, Cacao 70, and where the Marriott hotel is.  It is not where the Cineplex and adjoining stores are.  Thus, if you are driving from Enterprise coming from the west, you can make a U-turn into the small parking lot.  There are plenty of spaces there.  If you are driving from the east side, simply turn right before you see the building to park in the parking lot). 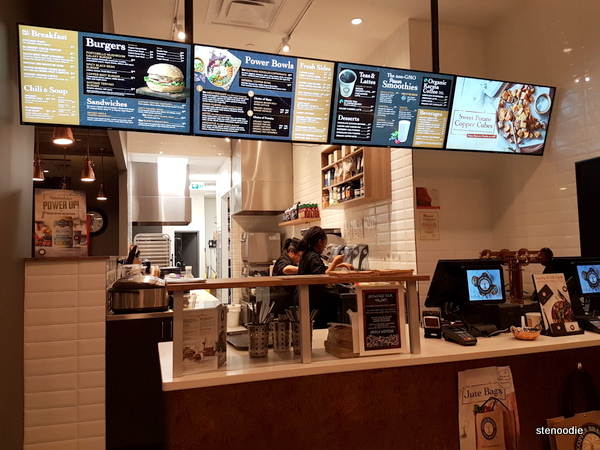 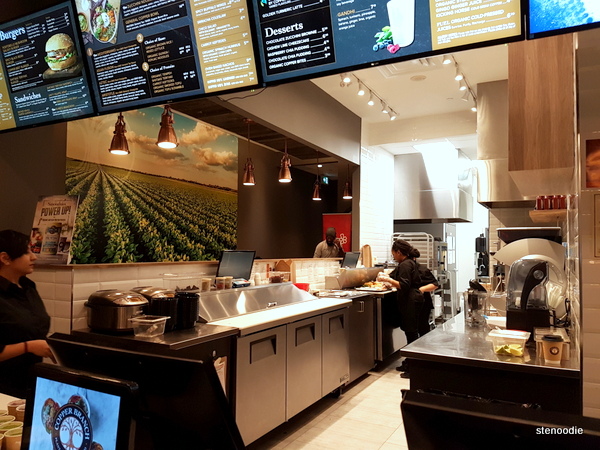 Copper Branch had set up a display table with all of the items that we were going to be trying out that night.  It was nice to see everything labelled for us. 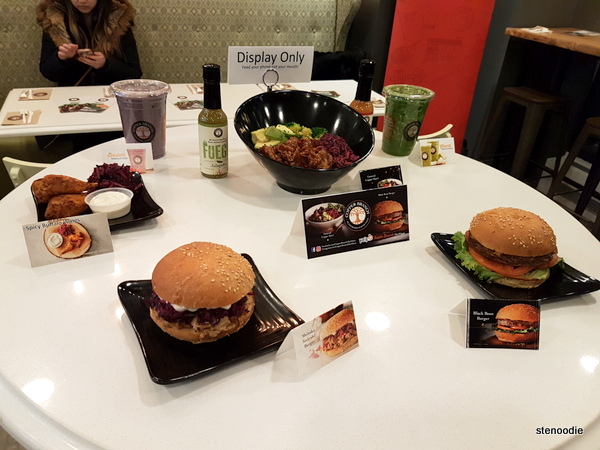 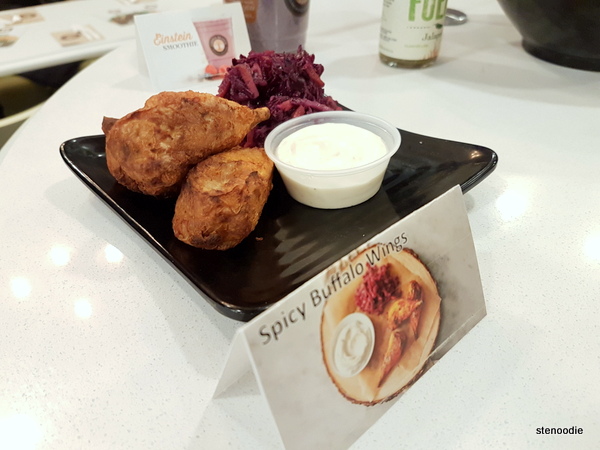 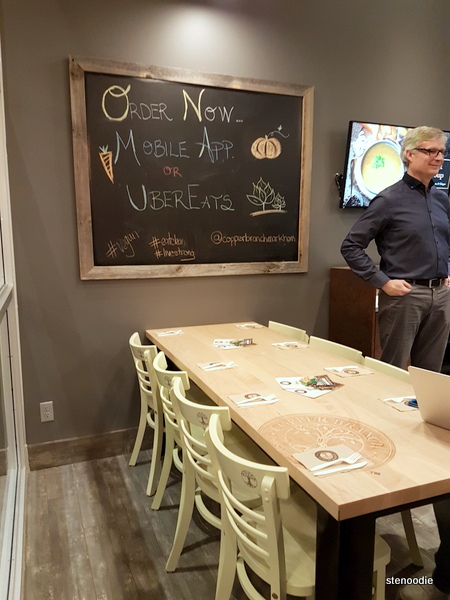 Jack, owner of the Markham store 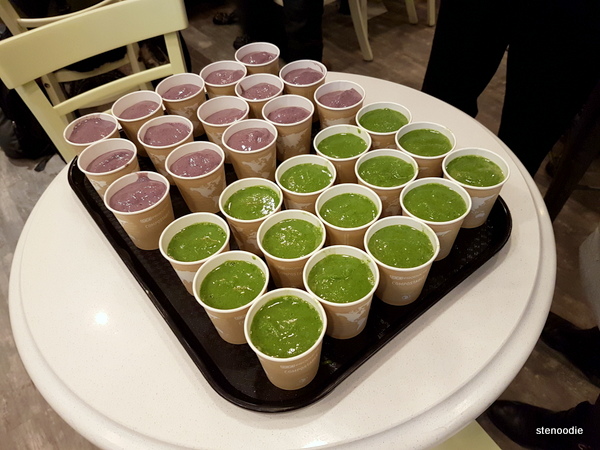 Surprisingly, I really liked the Einstein Smoothie.  It was ice cold, a little sweet, and tasted very good.  The Gandhi Power Smoothie tasted a bit bland even though I liked the spinach and turmeric components of it.

After a little spiel and introduction about the Copper Branch franchise and his personal story about veganism from the store owner, Jack, we were served the sample items at our tables. 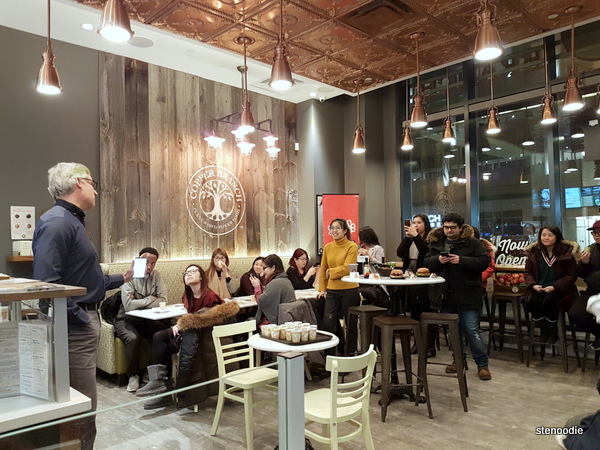 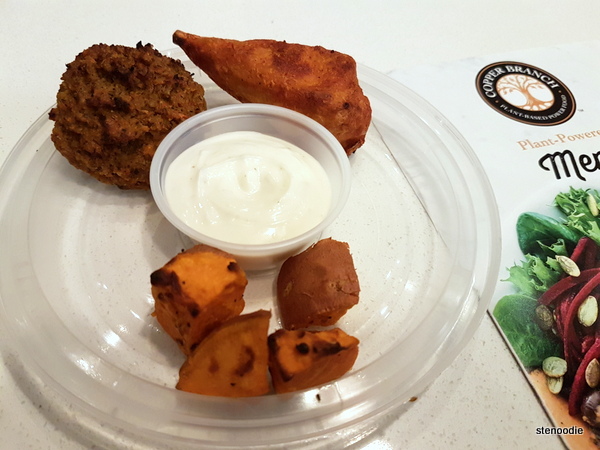 Our “appetizer platter” consisted of the tofu “buffalo wing”, Carrot Keftede, and Sweet Potato Cubes.  The vegan styled “buffalo wing” was a spicy Buffalo tofu wing.  It was made to look like a chicken wing and even befitted with a wooden stick in the centre of it to resemble the “bone”.  I really liked the taste of this!  It was chewy and dense and did taste like chicken.  (Although I think for environmental reasons, they could do away with the wooden “bone”.  It’s really not necessary.)  It came with a side of non-GMO aioli sauce too which was thick and tasty.

The Carrot Keftedes was a halved portion and made with carrot, chickpeas, fennel, garlic, and onion.  It reminded me of a falafel.  The Sweet Potato Cubes were great too but nothing too special to write about. 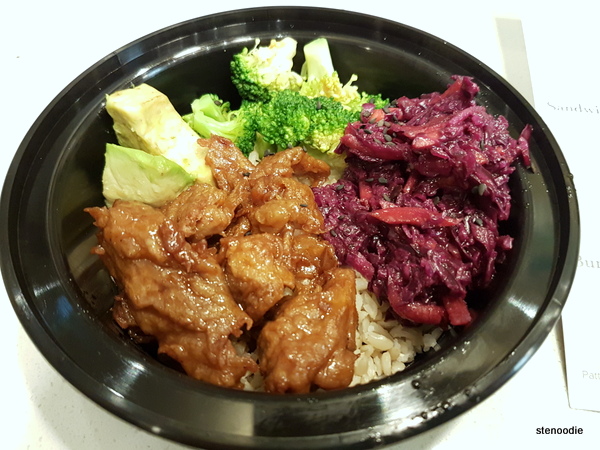 Next, we were served a sample portion of a power bowl.  This was the General Copper Bowl with shiitake mushroom General Tao, broccoli, avocado, organic brown rice, sesame seeds, sriracha coleslaw, and General Copper sauce.  The “General Tao” shiitake mushroom was made to resemble General Tao chicken and it did look and taste like it!  It was more hard and chewy (we were told that when it is freshly hot out of the kitchen, it would taste more tender).  This was a pretty good power bowl.  The organic brown rice was lukewarm and the sauce from the sriracha coleslaw tied the flavours together.  This was a very filling bowl despite being a sample portion! 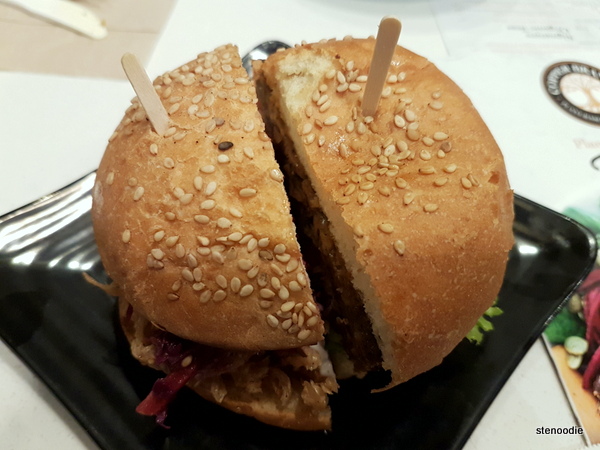 Lastly, we were served two samples of their burgers:  the Spicy Black Bean Burger and the Shiitake Teriyaki Burger.  I think everyone appreciated that we were given halves of the burgers as we were so full already from the previous items.  In fact, some people further halved the burger halves themselves (so really trying a quarter of each) since they were so full and used the take-out container from the power bowl to bring the remaining burger portions home.

The Spicy Black Bean Burger‘s patty was made with black beans, sweet potato, pea protein, brown rice, red pepper, green pepper, and corn.  The rest of the burger was fitted with lettuce, tomatoes, and South West sauce in between two organic kamut buns (you can also switch out for collard wraps too).  This was a pretty good black bean burger. 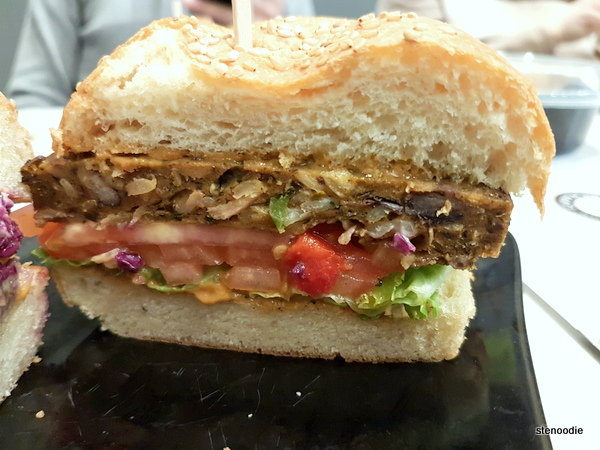 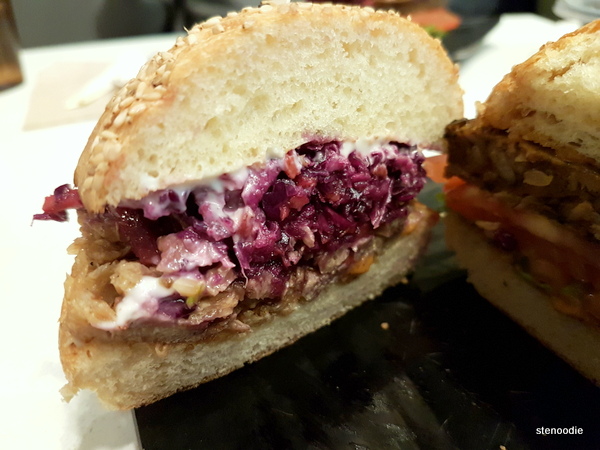 The Shiitake Teriyaki Burger had shiitake mushroom, organic teriyaki sauce, organic tamari, sriracha coleslaw, and non-GMO aioli sauce also in between two organic kamut buns (“kamut is an ancient type of wheat with more protein, magnesium, zinc, and vitamins B and E than common wheat — a healthy alternative to your normal white bread”).

I liked the taste and chewy texture of the shiitake mushrooms.  The sriracha coleslaw in this burger actually was the same as the one used in the General Copper Power Bowl, so the taste was identical.

They have a filtered water fountain area for customers to fill up on drinking water.  Their utensils and take-away containers are also compostable (to fit in with the vegan and environmentally friendly lifestyle).  Their menu has gluten-free alternatives and uses mostly certified organic and non-GMO ingredients.  They also have some beverages and dessert bakes in the fridge and teas and coffee on the shelf for purchase. 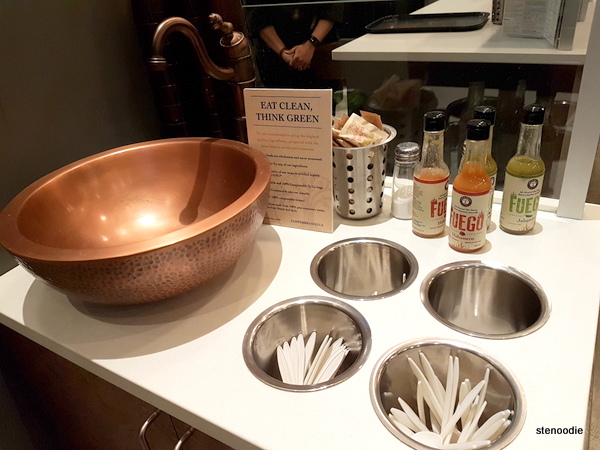 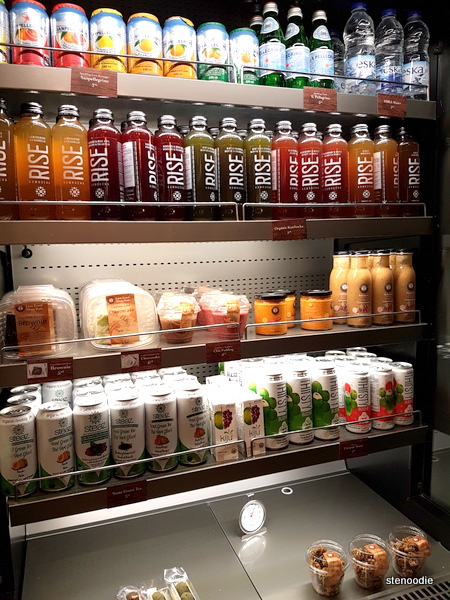 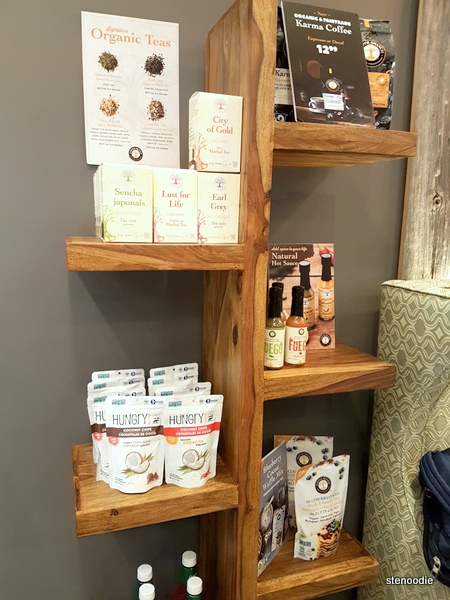 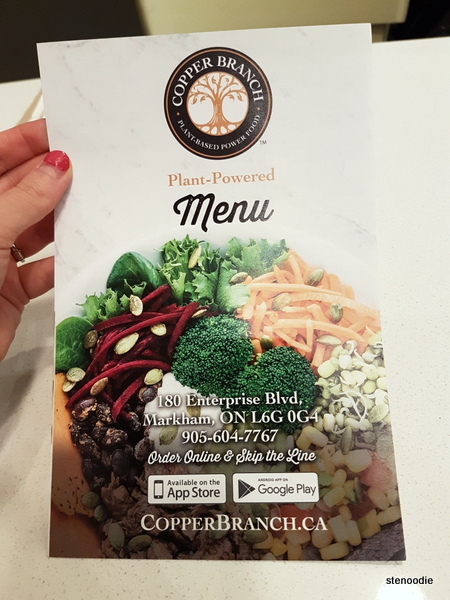 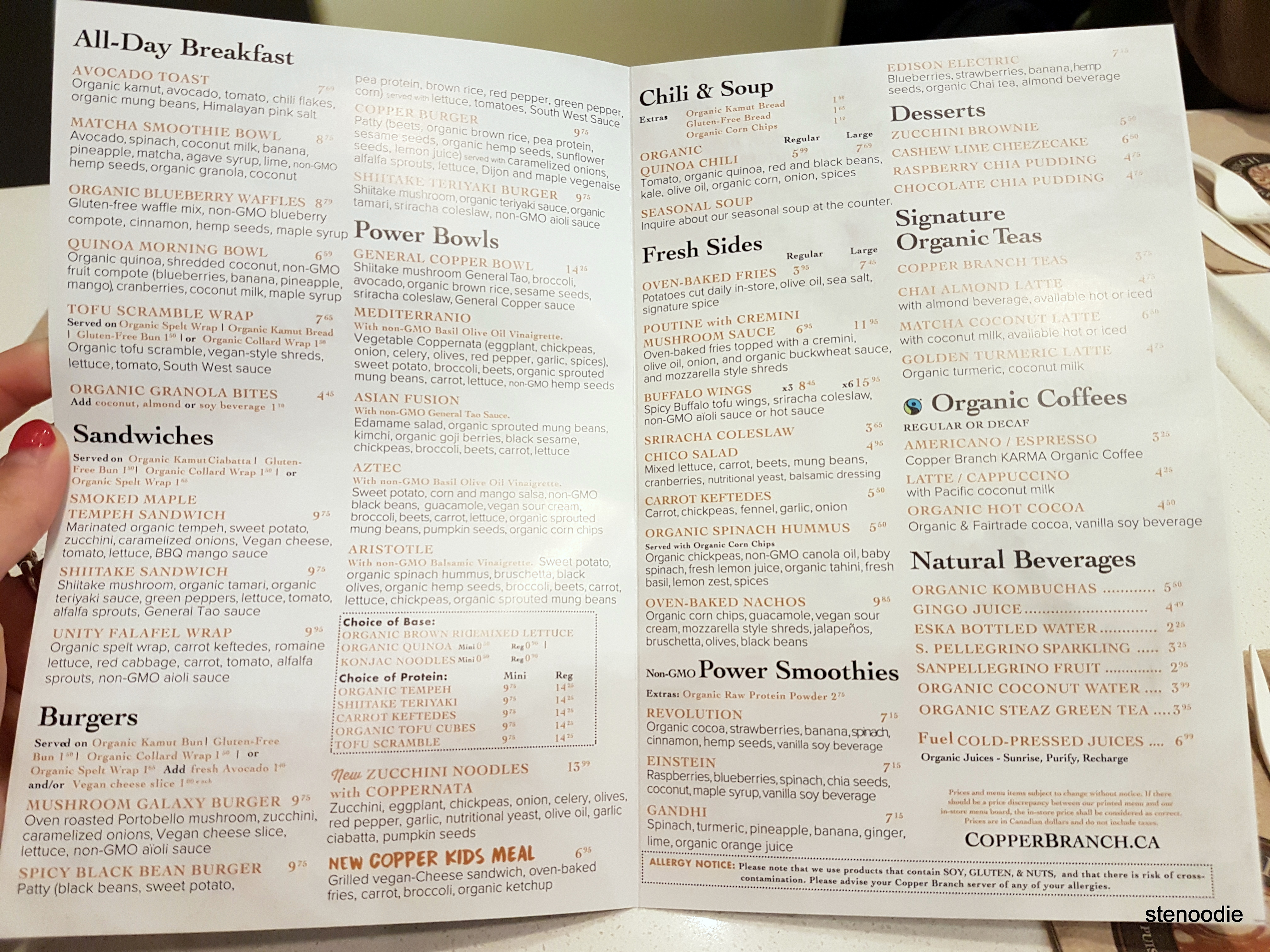 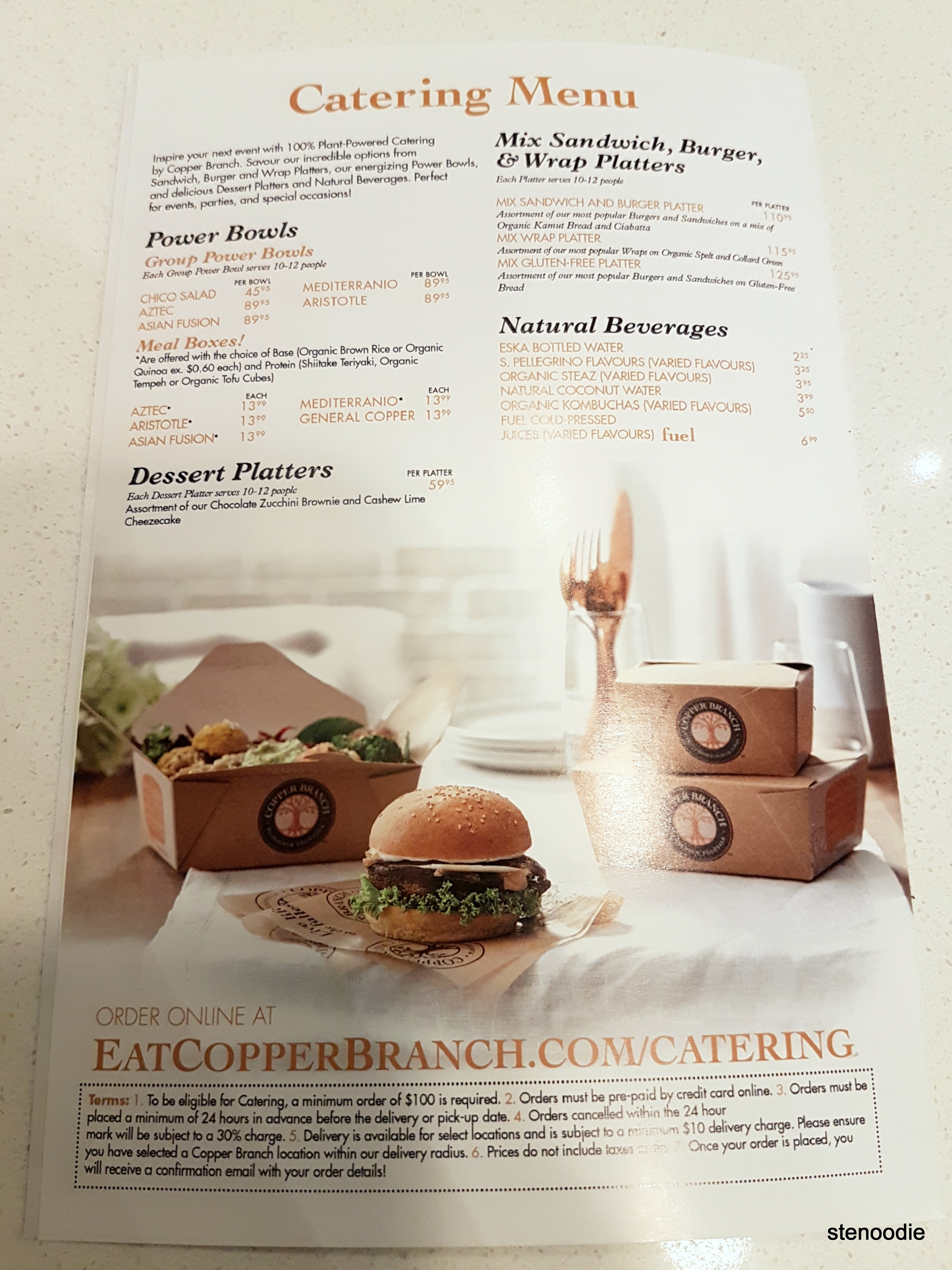 Thank you Yelp and Copper Branch for having me at this tasting! 🙂

FTC Disclaimer:  Although Yelp and Copper Branch invited me to a complimentary tasting, the opinions expressed here represent my own and not those of the businesses.