Yelp Event: “If You Yelp It, They Will Come” at Shoeless Joe’s in Vaughan 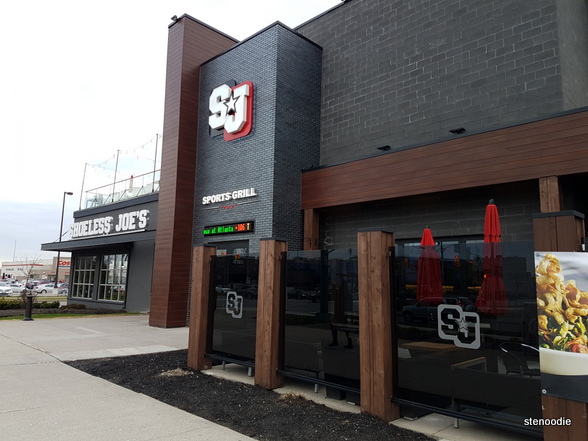 April 30, 2019:  Wow, I’m surprised, I have never blogged about a Shoeless Joe’s restaurant before.  I actually don’t even remember if I’ve even been to this sports grill/restaurant franchise before.  XD.

Yelp had a Community Yelp Event at the Vaughan location of Shoeless Joe’s (Weston Road and Highway 7).  (Plenty of parking available.)

Starting at 7 p.m. on the second floor of the restaurant, we were greeted with servers serving White Berry Sangria or Sangria Fresca (red wine) sangria.  We also began the night with a classic “get to know you” game by talking to other Yelps at the event and seeing if they qualified for filling in one of the boxes on the sheet.  After the sheet was completed with names, it was entered into a draw for a $40 Shoeless Joe’s gift card.  It was such a nice activity and incentive to get everyone participating. 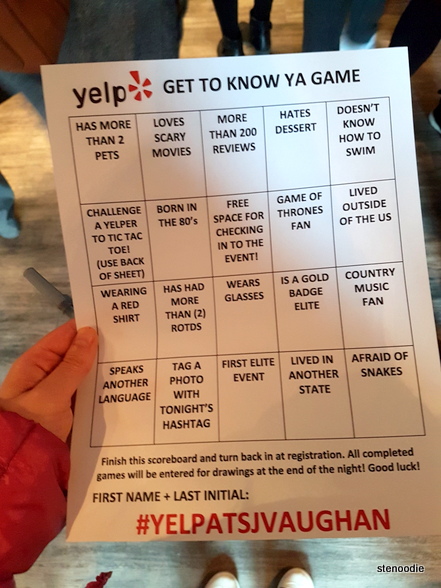 “Which box can you fill in?”

I found the White Berry Sangria a tad bland, and the Sangria Fresca red wine sangria to be super delicious and tasty.  Taste is definitely subjective as most of the Yelpers that I spoke with also preferred the red wine sangria more too, but I also heard that someone preferred the white one since the red one was too sweet for them. 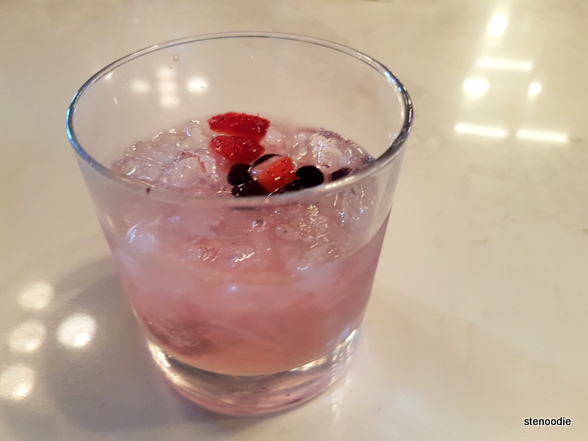 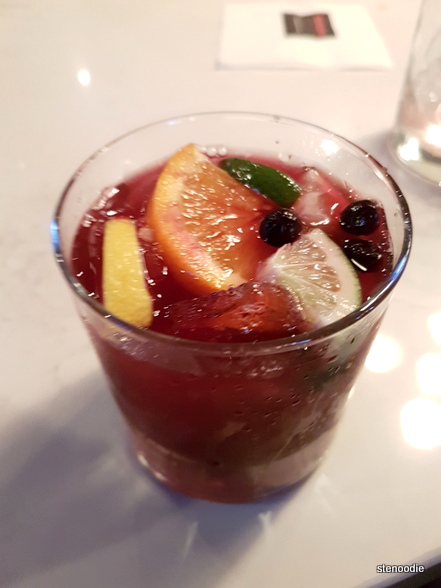 We were served a number of finger foods that night, which included Asian Chicken Bites, a variety of hand-stretched flatbreads (Chorizo & Sweet Pear and another one I forget), Coconut Shrimp, and Deep Fried Pickles.

Every bite of the food that I had tasted good.  I especially liked how juicy the Deep Fried Pickles were.  If you like Coconut Shrimp, the large pieces were done well and came out piping hot. 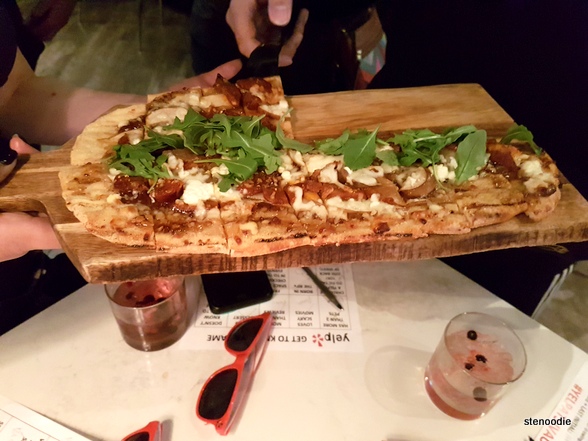 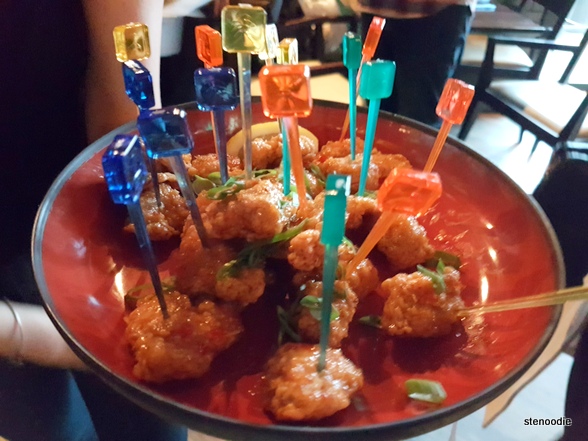 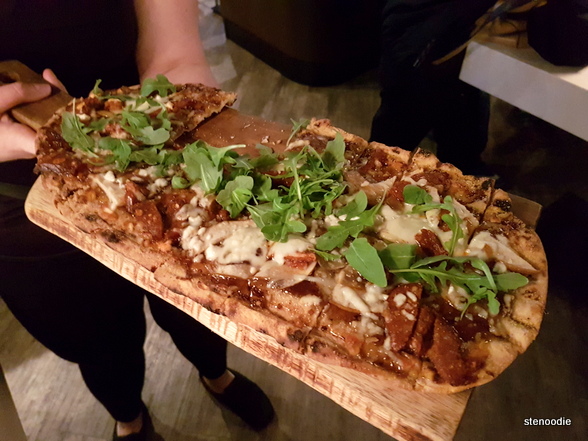 Another pic of the Chorizo & Sweet Pear flatbread 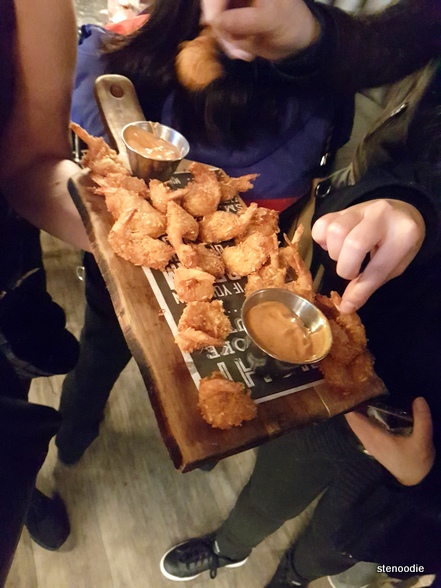 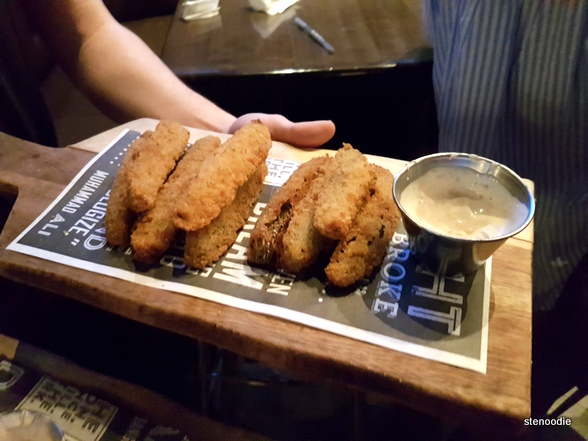 I only wish that they didn’t use so much unnecessary single-use plastics for the food.  The “sticks” for the chicken bites were colourful plastic sticks that were literally used for one second and then thrown away.  They could have at least opted for toothpicks; wood is better for the environment than plastic. 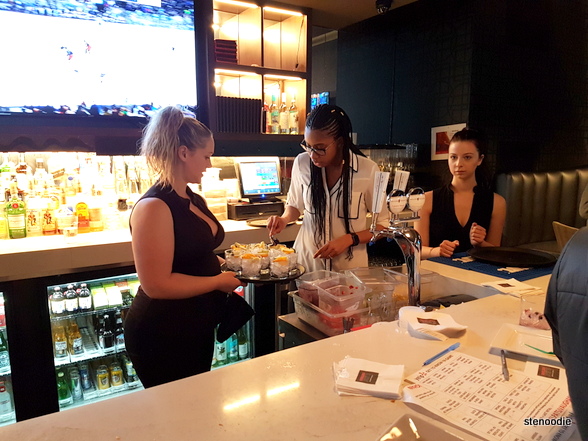 The drinks flowed continuously that night, and the bartenders and servers definitely did a great job to make sure everyone had one (you could also get a Coors beer or fountain drinks or juice from the bar).

The owner of the restaurant gave a short spiel about how they began the franchise (with the tagline “if you build it, they will come”, hence inspiring the name of this Yelp Community Event). 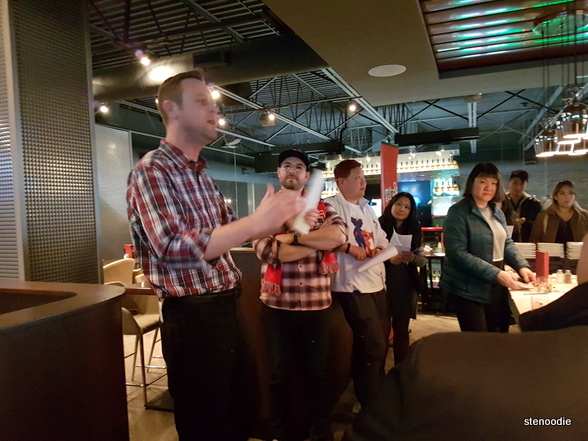 Speech by the owner

After the winner of the gift card was randomly drawn and announced, we were served a limited edition dessert as well.  It was a Watermelon Sherbet with edible “seeds” (chocolate chips).  It was nice and refreshing. 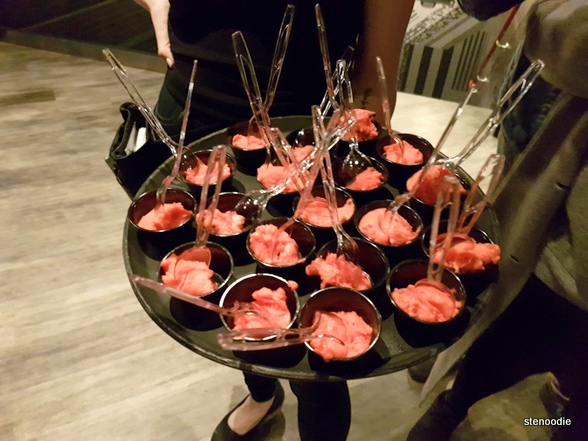 (It would have been nice also if tiny plastic spoons weren’t used for the sorbet samples.  It’s such a waste.  Instead, something compostable like EcoSpoons should be contemplated and used. )

The interior of the two-storey Shoeless Joe’s restaurant was very sophisticated and nice.  It’s definitely a great place to come after work to unwind.  As it’s a sports bar, they also have plenty of TV screens to watch your favourite team play too.  They also have a rooftop patio. 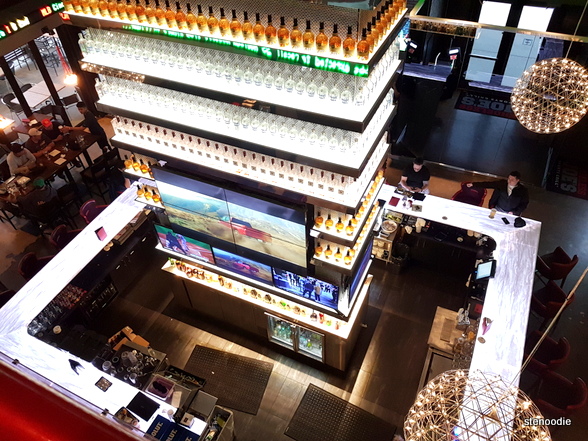 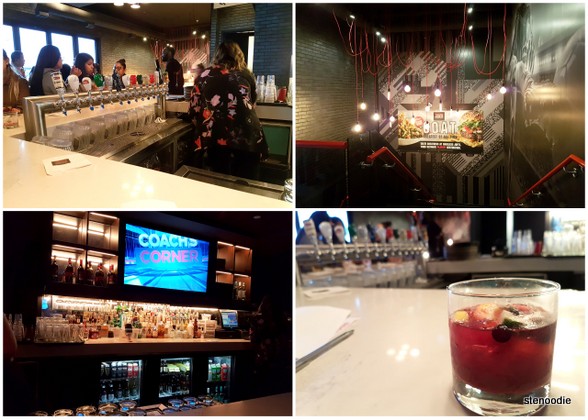 Thank you so much for inviting us, Shoeless Joe’s and Yelp! 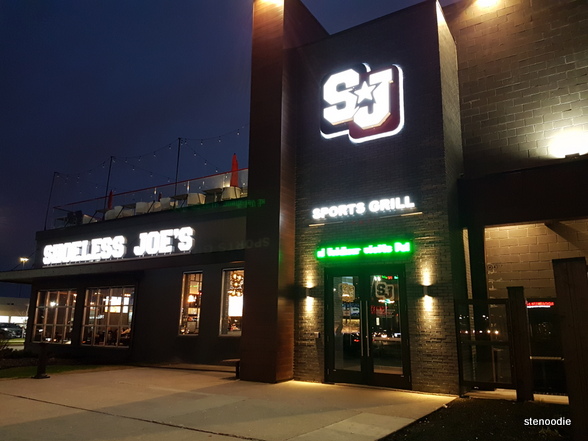 Nightview. You can see the rooftop patio here!

FTC Disclaimer:  Although Yelp and Shoeless Joe’s invited me to a complimentary event, the opinions expressed here represent my own and not those of the businesses.