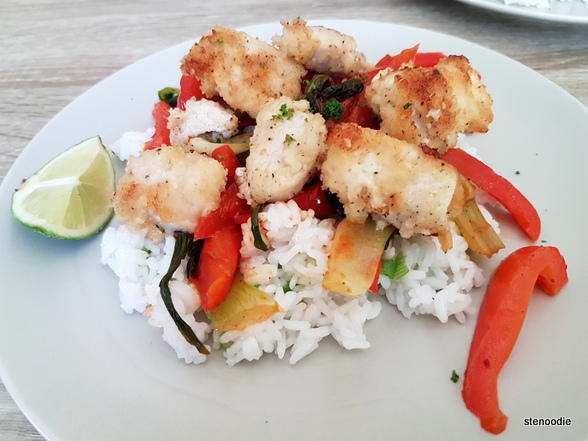 April 25, 2019:  This was probably the most disappointing Chefs Plate meal I made, and it’s all because of my own mistakes than the recipe itself.  Oh, well.  You live and you learn.

This dish was the Asian Popcorn Chicken with Jasmine Rice, Lime Aioli, and Stir-fried Veggies.  It had a difficulty level of “medium” and a cooking time of 30 minutes.

As usual, I laid out all of the ingredients on the table for a flat lay photo before I started cooking. 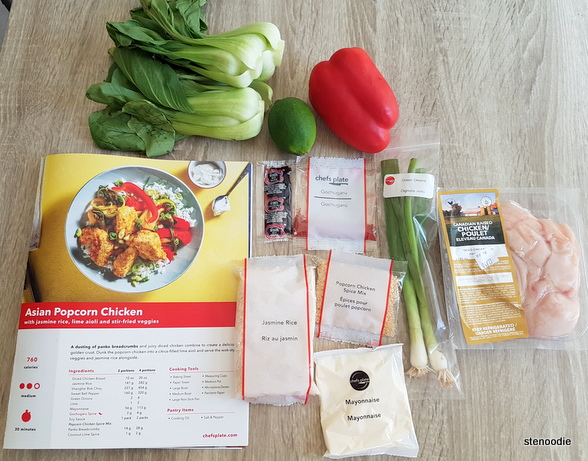 I was quite ravenous this day and perhaps that’s why I didn’t read all of the details in the instructions carefully, which led to the mistakes. 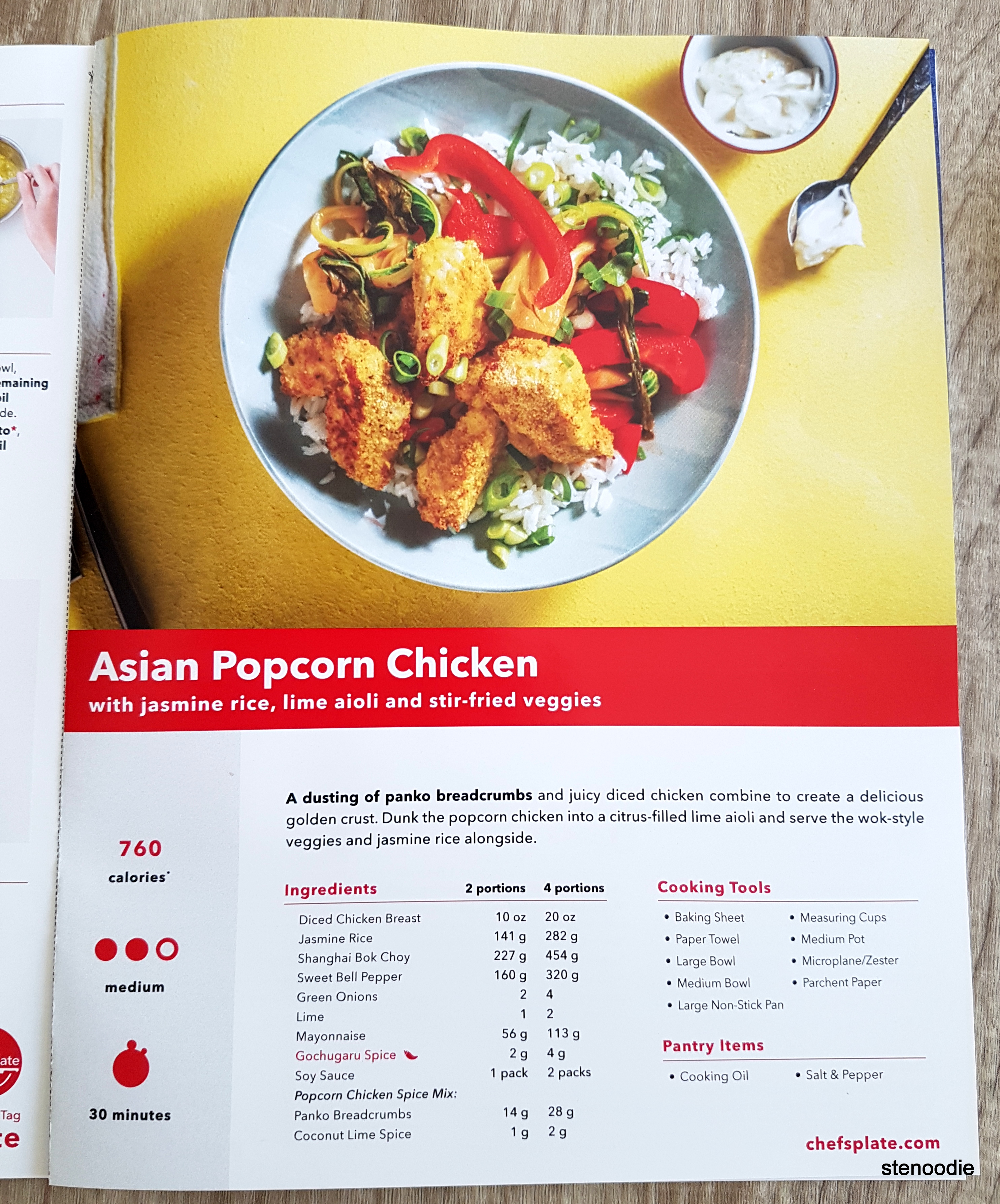 The items you’ll need to make this recipe 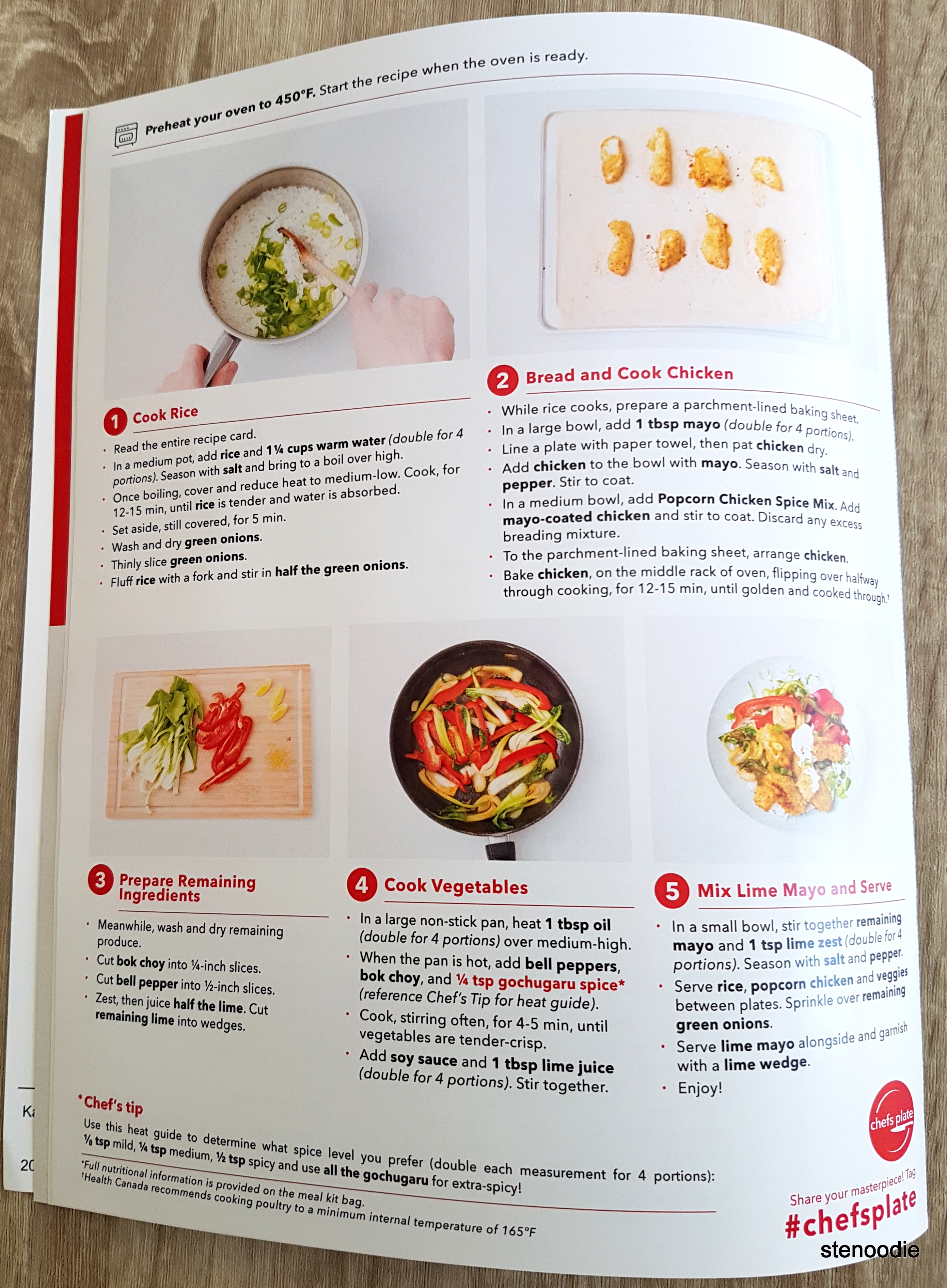 The instructions could have been more clear for this recipe 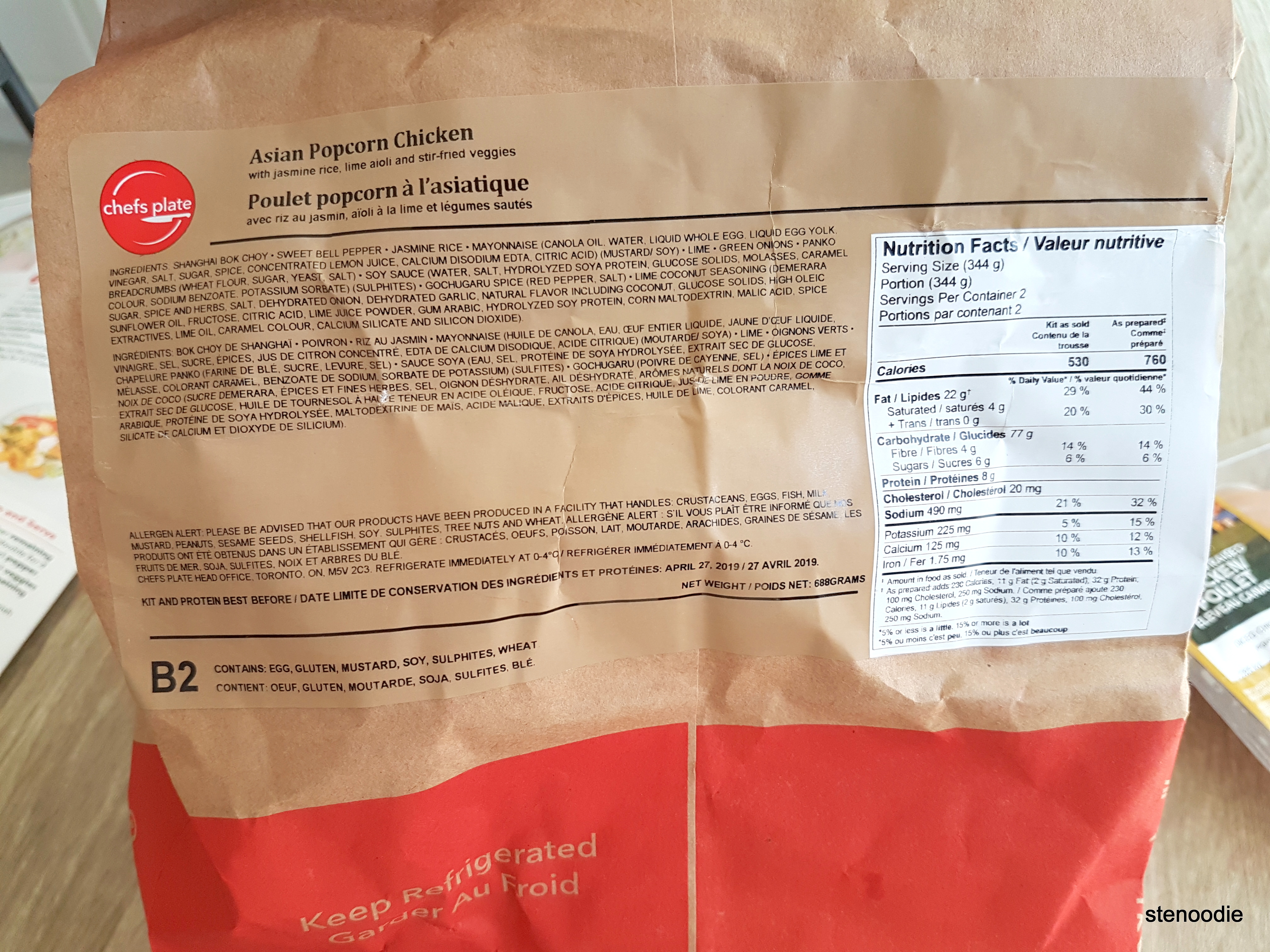 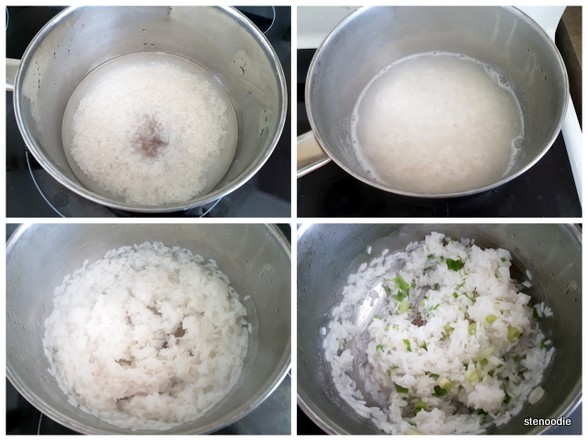 Cooking rice in a pot

First of all, this dish called for the cooking of jasmine rice.  Being someone who had always used a rice cooker to cook rice, I had never made rice on the stovetop before.  While it is so much easier to make rice using a rice cooker, I wanted to try my hand at making rice using a pot.  Thus, I followed the instructions that Chefs Plate had on the recipe card in making the rice.

This included adding rice and 1, 1/4 cups of warm water into a medium pot, boiling it on high, and then covering and reducing the heat to a medium-low.  Then you cook it for another 12 to 15 minutes until the rice is tender and the water is absorbed.  I feel like the amount of water suggested for this dish wasn’t enough and that’s why the rice at the very  end turned out hard and not fully cooked.  Also, the green onions that had been sliced were all thrown into the pot at this time (it was actually supposed to be only half of the green onions — the remainder was supposed to be left for sprinkling over the dish.  First mistake right there.)

(Also, at the beginning of the cooking process, you should pre-heat your oven to 450ºF.  This is how you’re going to bake the chicken.) 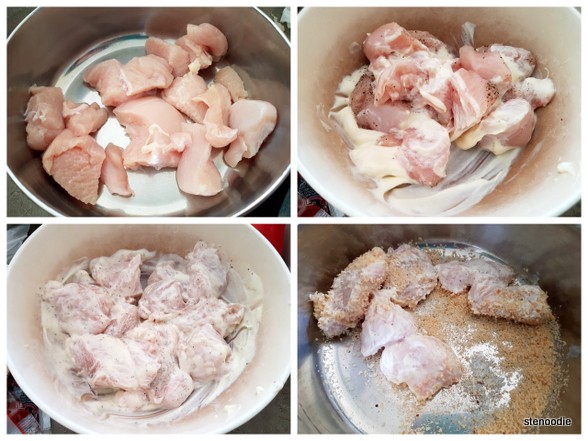 The next step was to bread and cook the chicken.  The diced chicken breast was to be added into a bowl with mayo and then seasoned with salt and pepper.  Mistake number two was when, instead of adding just one tablespoon of the mayo, I emptied the entire package of the mayo into the bowl.  Thus, there was way too much mayo.  (The remaining mayo was supposed to be used to make the lime mayo sauce!  D’oh!)

This chicken was then to be coated with the Popcorn Chicken Spice Mix (panko breadcrumbs and coconut lime spice) and arranged on to a parchment-lined baking sheet (we always use aluminum foil instead).  The chicken was to be baked on the middle rack of the oven for 12 to 15 minutes (flipping it halfway through). 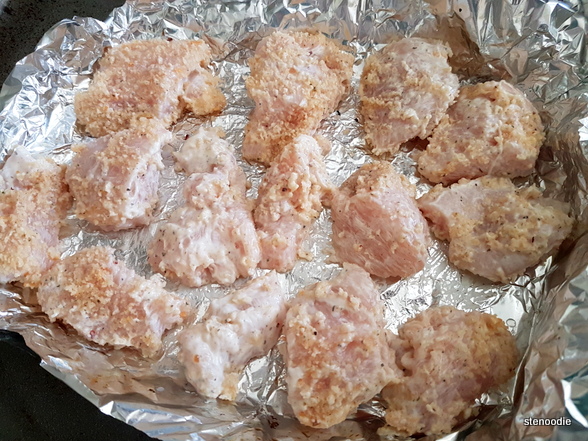 After the chicken has been coated in mayonnaise and spice mix, put it into the oven 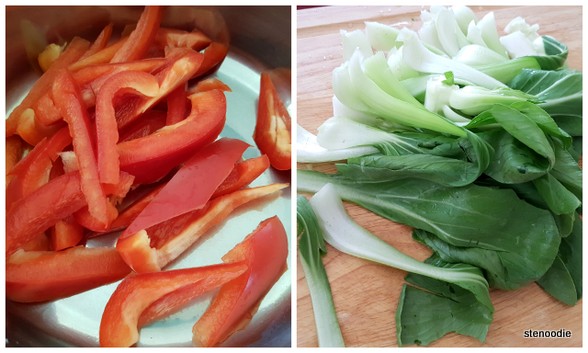 Slice up the veggies

While the chicken was baking, Chefs Plate instructed us to prepare the remaining vegetables:  Chop the bok choy into 1/4 inch slices, the bell pepper into 1/2 inch slices, and the lime to be zested, juiced, and cut into wedges.

I found that instead of cutting the vegetables at this time, this step should have been done right at the beginning.  There wasn’t enough time between the chicken cooking and the preparation of the vegetables.  I felt so rushed.

The vegetables were to be cooked on a pan and adding 1/4 teaspoon of the gochugaru spice, soy sauce, and 1 tablespoon of the lime juice.  I ended up cooking the vegetables for a lot longer than the 4 to 5 minutes. 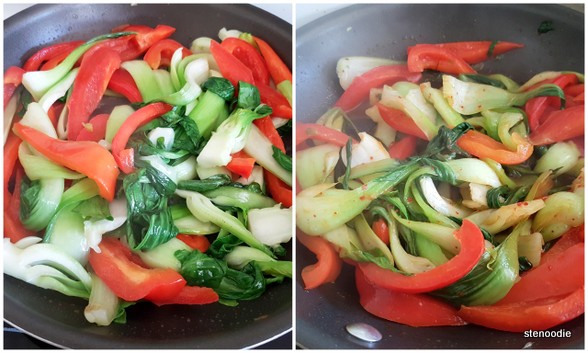 Anyway, the final step was to plate it all together. 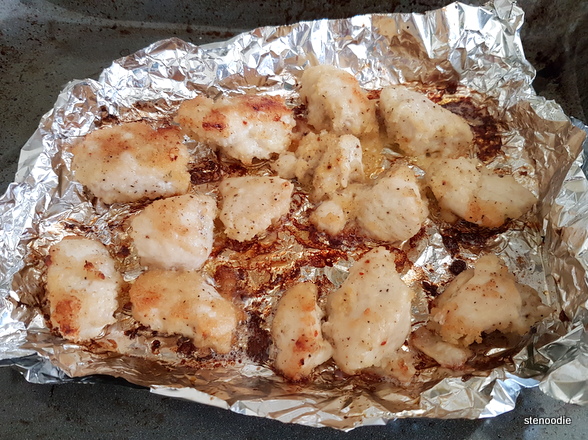 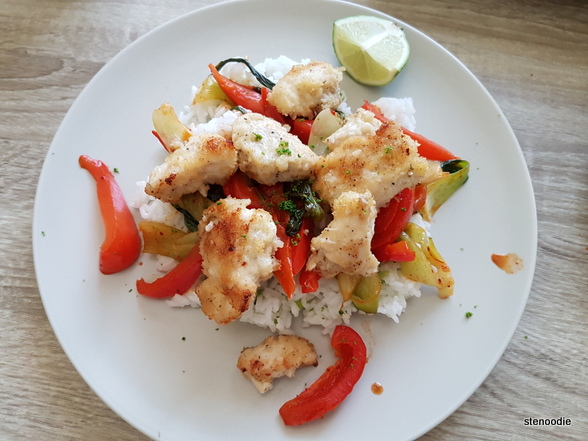 Taste wise, the chicken obviously didn’t turn out to be the “popcorn chicken” variety that I usually love and crave for.  There was too much mayo on the chicken and not enough Popcorn Chicken Spice Mix either to coat all of the pieces.  Furthermore, the chicken breast was so rough and not tender at all.  It was very disappointing.  I wish it had been chicken thighs or drumstick meat that had been provided instead.

And as I mentioned above, the rice definitely wasn’t cooked properly.  The cooking process lacked water.

This was definitely one of the worst Chefs Plate cooking experiences I’ve had to date (way worse than another one where I felt I bombed it). 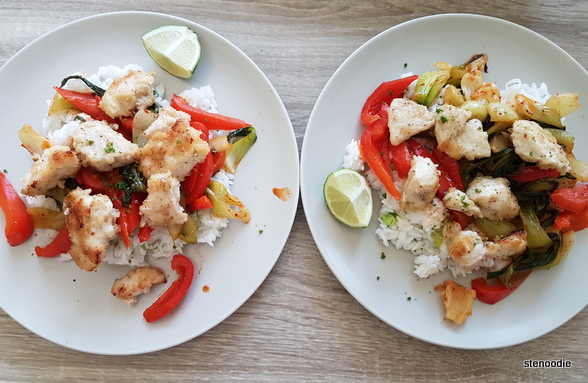 Later, when I talked to Kelvin (who had also cooked the same Asian Popcorn Chicken dish from Chefs Plate), he also told me how he mistakenly added all of the mayo to the coating of the chicken as well!  It wasn’t only me then who made that mistake.  I know I’ve only talked to one other person who made this boo-boo, but perhaps Chefs Plate could improve the way this recipe is written so that the portion of each ingredient is more clearly emphasized.

Anyway, if you do want to try Chefs Plate for yourself, you can try it for free when clicking this link (four plates will automatically be deducted from your shopping cart after you select the meals).