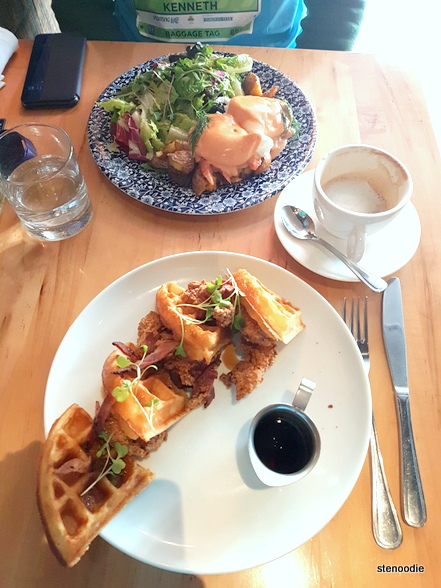 May 12, 2019:  Our visit to Provo FoodBar confirmed to me why you should never decide on a restaurant when you’re hungry.  …

Provo FoodBar is located on Dundas Street West directly across from the Art Gallery of Ontario.  After our Sporting Life 10K run at 10:30 a.m., we were looking for a restaurant for brunch just like last year.

While on the Dundas streetcar, Provo FoodBar was the first restaurant that popped up in my search along our route that had high ratings and was open for brunch.  We were starving and looking forward to a hot meal after the two-hour event.  It was also windy and cold outside, so something comforting was in our radar. 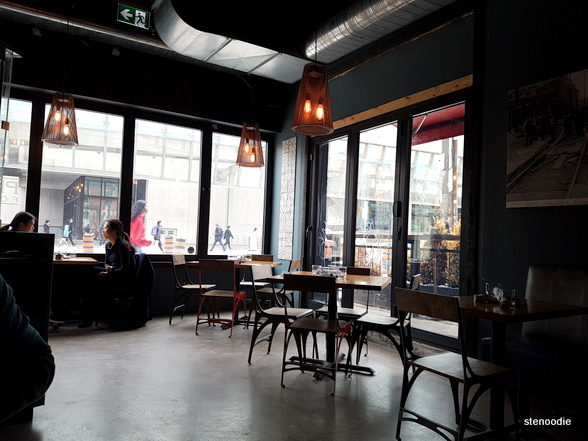 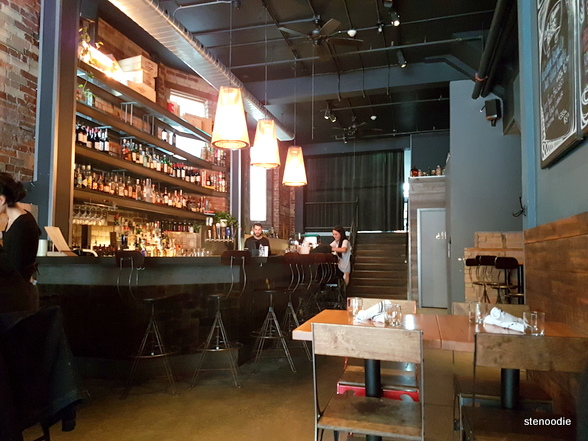 Provo Foodbar wasn’t busy at all when we arrived at 11:30 a.m. on the Saturday.  There were a couple of tables near the windows that were either reserved or occupied already.

We were given a two-seater against the wall.  It was quite dark inside the restaurant for my liking for a noon-time brunch.

Also, since we had charged in without consulting their menu first, I was quite disappointed to find out at the table that their brunch options were quite ordinary and not extensive at all.  (We had such an amazing brunch experience last year after the run at Lisa Marie.)  However, it was too late to leave the restaurant and find another one since we were hungry and ready to eat.  We placed our order with the server (also acting as the hostess) and waited for our food to arrive. 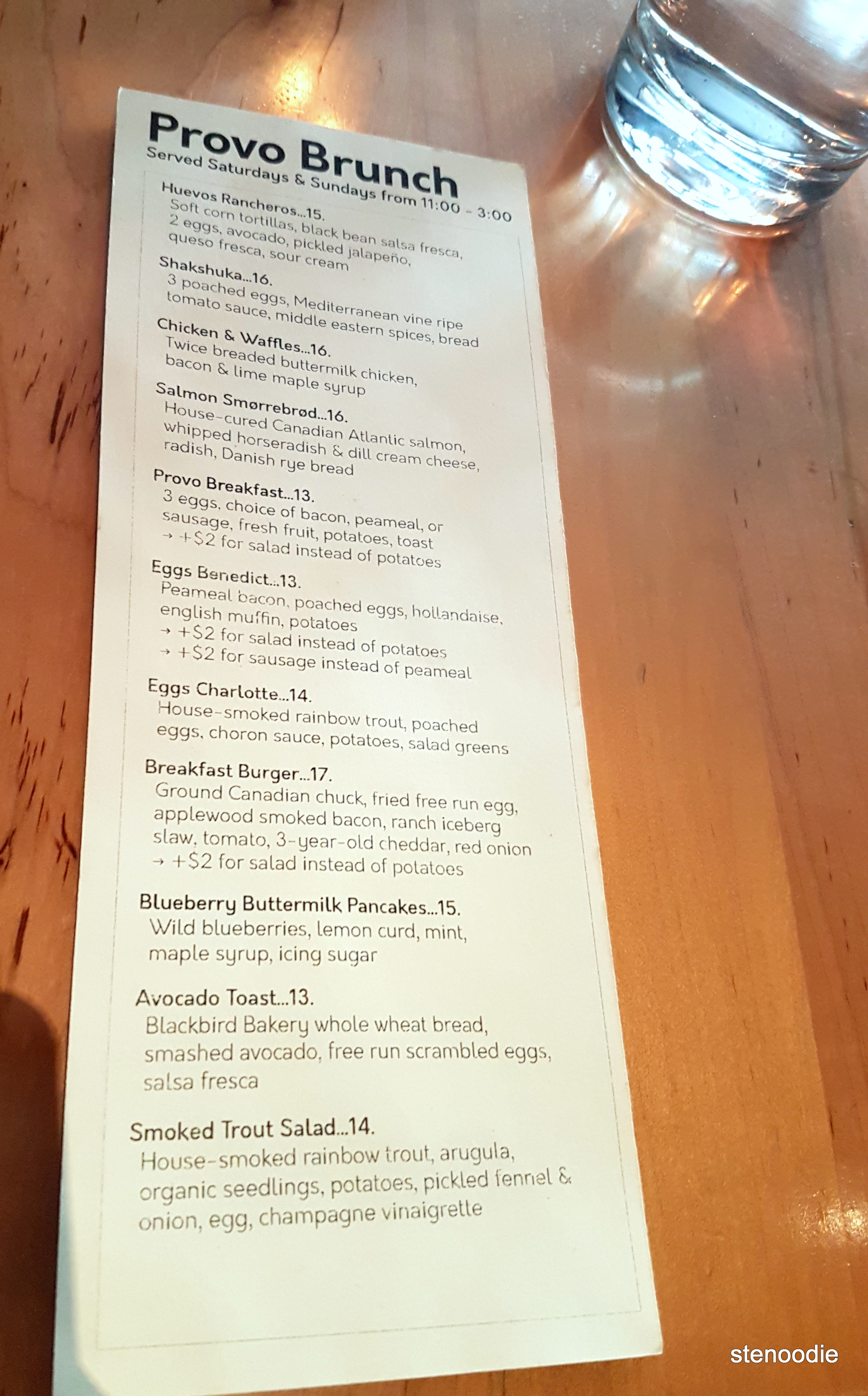 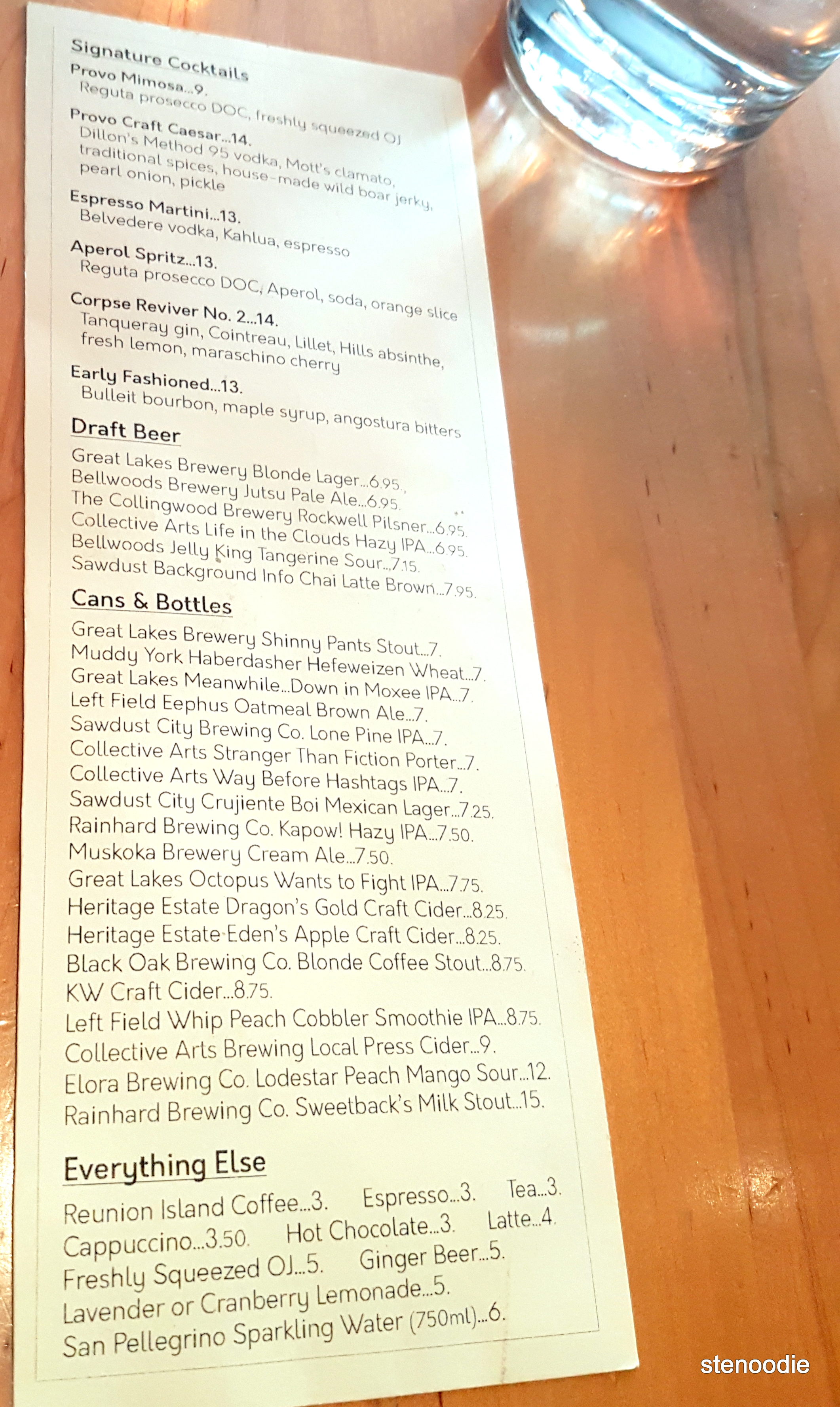 The Cappuccino that Ken got was nice and thick but didn’t have any art on it.  It would have been nice to see some art in the foam. 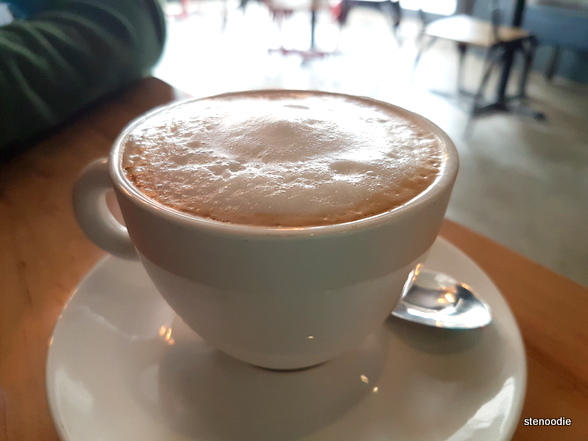 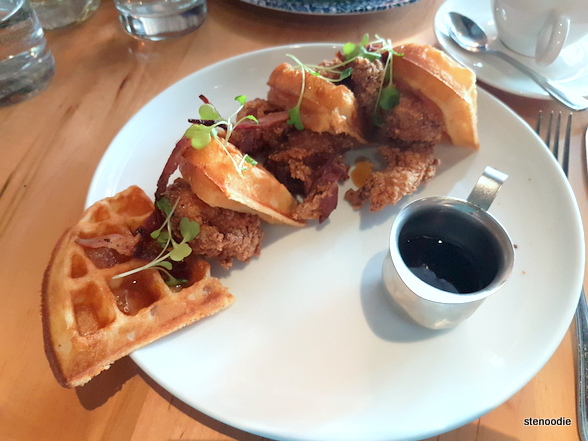 The food took around 15 minutes to arrive, which felt extra long as we were hungry.  My order of Chicken & Waffles was presented delicately with the twice breaded buttermilk chicken pieces laid between each piece of waffle.  There were bits of bacon scattered on the dish too.  There was a serving of maple syrup, which I didn’t use because I thought that the chicken was flavourful enough.

I really enjoyed my brunch although the pretty presentation actually made the portion look smaller than I would have liked.  The waffles were so soft and went well with the crispy chicken.  It was a pretty delicious dish.  (It would have been nice if there was some sort of side salad served with it.) 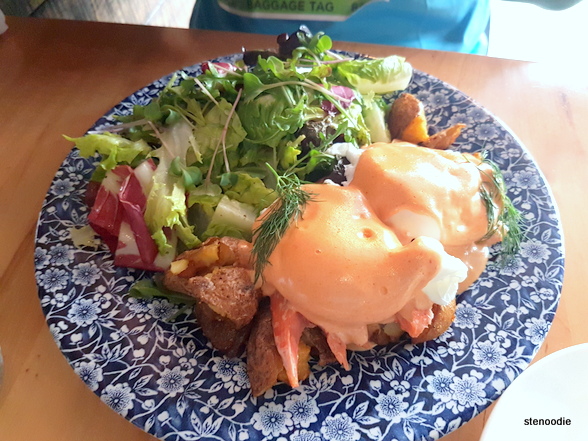 What we were disappointed with though was the order that Ken got.  He chose the Eggs Charlotte.  The house-smoked rainbow trout, poached eggs, choron sauce (variation on the classic Béarnaise sauce by adding tomato paste), potatoes, and salad greens were presented on a beautiful blue flowery plate.  The dish was so colourful!

However, taste-wise, it left a lot to be desired.  The rainbow trout and choron sauce on top of the mushy potatoes were quite bland as well the rest of the dish.  There wasn’t any dressing on the salad greens.  Ken usually prefers cleaner tasting dishes so for him to remark that this dish wasn’t flavourful enough says a lot.  This dish was incredibly disappointing and didn’t taste good. 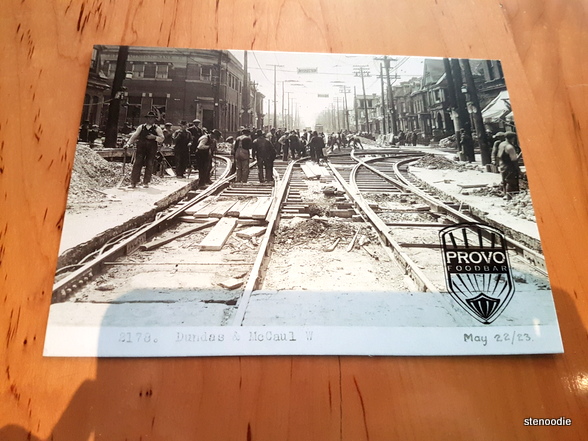 The server told me that I could keep it, but another useless postcard just means more clutter at home

Thus, this restaurant for me was disappointing:  One, because the brunch menu was quite ordinary and unremarkable (I wish we had taken time to research a better brunch restaurant since there are so many other options downtown — and it’s rare for us to be downtown for brunch anyway); two, the disappointing rainbow trout bennies dish; the restaurant atmosphere was dark and grim for a brunch setting; the server seemed a bit snuck up (which affected the visit).  We didn’t feel comfortable voicing our concerns about the food, so we just let it be.

The upshot is that we got a table right away, and the prices were reasonable. 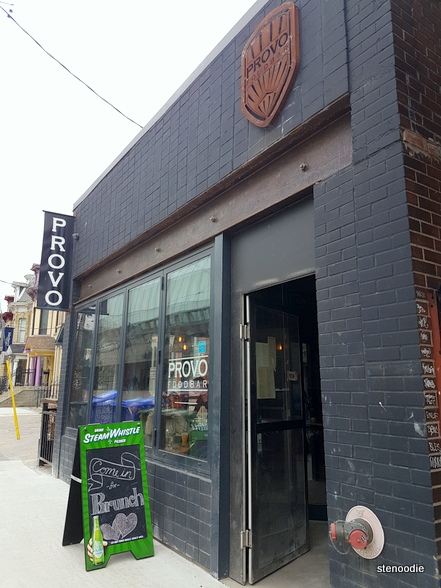 My takeaway is I feel like Provo FoodBar is not a good choice for brunch; go elsewhere.  I think they fare better as a restaurant for small bites/tapas or for dinner (they feature Italian food).  It’s just too bad that we stumbled upon this restaurant for brunch.