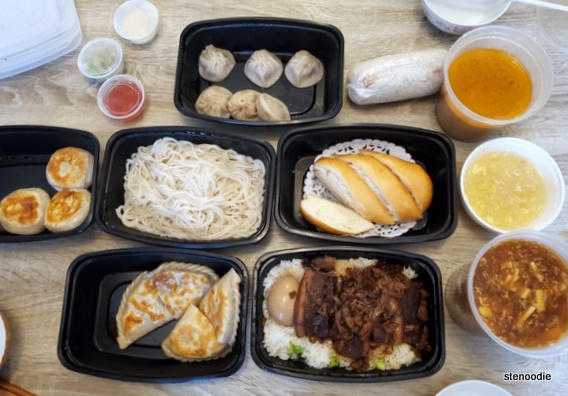 I was feeling for some Shanghainese food and wanted to order takeout from the Golden Shanghai Restaurant at Kennedy and 14th Avenue (their peanut chicken rice sheets are SO good and they have amazing dinner combos), but it seems as if they are closed during the pandemic.  I called the restaurant and there was no answer.

Thus, I had to resort to another Shanghainese restaurant and settled for Ding Tai Fung Shanghai Dim Sum (鼎泰豐) located at First Markham Place.  This Ding Tai Fung is not an official outpost of the famous dumpling restaurant in Taiwan even though the English name looks similar.  The actual renown one in Taiwan is spelled without a “g” in their name:  Din Tai Fung.  Thus, don’t be conned into thinking this one in Markham is a branch of the real thing.

In any case, I looked up online for their website (they don’t have one) for the menu.  I ended up using the Ubereats website to peruse their menu.  Ubereats has a really organized and clear menu system where all of the different dishes are categorized with photos where provided (with Chinese characters for each dish as well).

I’ve dined at this Markham Ding Tai Fung multiple times in the years since my very first blog post about it, but this was my first time ordering takeout from them. 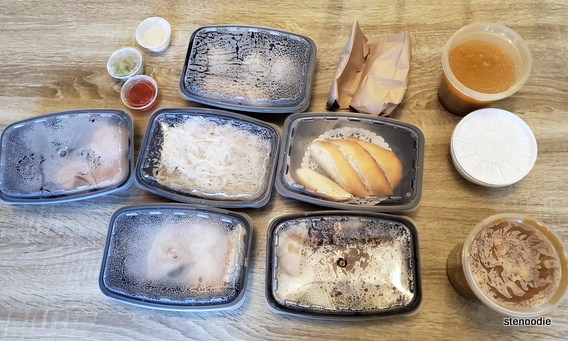 How it all looked after removing from the plastic bags

I called the restaurant and placed the order with the lady who was very pleasant on the phone.  She made sure to repeat my order to confirm all the dishes.  For the Stewed Pork and Preserved Vegetable with Steamed Vegetable Rice dish, she asked if white rice was acceptable as opposed to vegetable rice because the vegetable rice would take longer to make.  I inquired how much longer and she told me it would be a 30-minute wait.  I said that was fine because that was why I wanted that dish; I wanted vegetable rice.  She admitted defeat, I guess, and then we hung up the phone.  She didn’t ask for my name or phone number, sort of like how when I ordered takeout from Pho Time last week and the staff member there also need didn’t my contact details.  I guess these Asian restaurants are confident that you will arrive to the restaurant that they don’t intend to follow up with you in case of a no-show.

My mom was the one who picked up the order.  She said that the pick-up process was smooth.  There were a few people waiting inside of the restaurant for their takeout orders as well.

We had eight dishes in total, most of which were small snacks, and every dish was shareable.  All of the dishes were packed in black plastic containers or transparent plastic containers.  It was nice to see no Styrofoam at least (except for the corn soup). 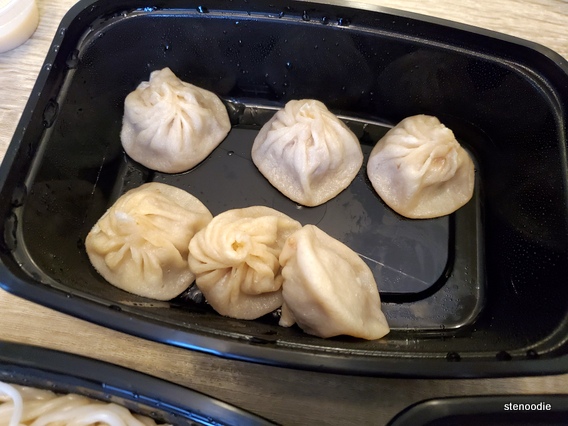 This would be my first time ordering soup dumplings for a takeout order.  Soup dumplings absolutely must be eaten fresh when they are steamed otherwise the dumpling skin is likely to become tough and sticky.  Plus, the soup inside the dumpling will have dried up on the way from the commute.  However, the Steamed Soup Dumpling with Pork Filling (小籠包) (xiao long bao) here were actually quite decent and tasted good even after being cooled down a little bit.  Ding Tai Fung made sure to include a container of red vinegar and ginger slices too for dipping.

The Minced Beef Pie (牛肉餡餅) had only three pieces but was surprisingly good.  On the outside, it was a solid and rather hard-looking round bun that was pan fried on both sides.  When you bit into it though, the stuffing was very juicy with minced beef and lots of flavour. 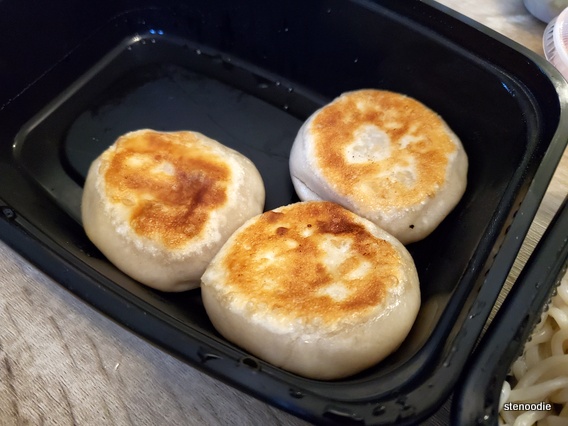 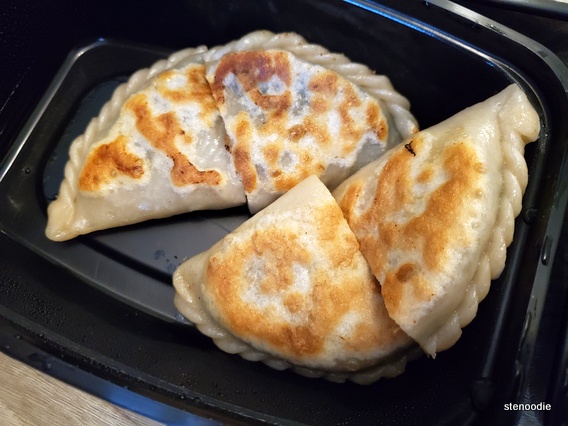 The Pan-Fried Pork and Chive Pocket (韭菜盒子) is one of my absolute favourite appetizers to order at a Shanghainese and/or Chinese restaurant, but unfortunately it didn’t live up to my expectations here.  The pastry pocket is supposed to be thin and the stuffing usually has vermicelli, scrambled eggs, and chives.  Here, the pastry pocket was on the thick starchy side and the stuffing was not very generous.

The Deep-Fried Silver Roll (炸銀絲卷) is a simple white roll that comes with condensed milk.  It is so tasty with the thick sweet condensed milk! 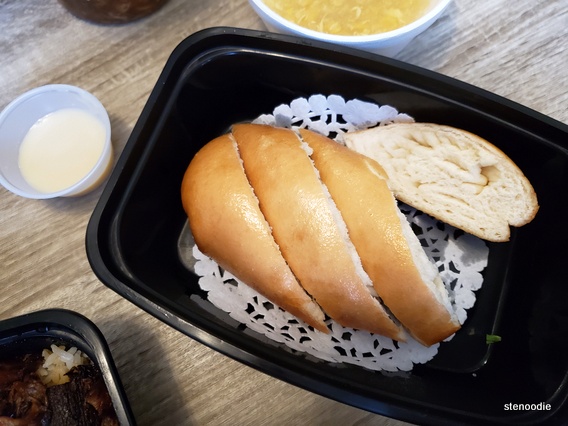 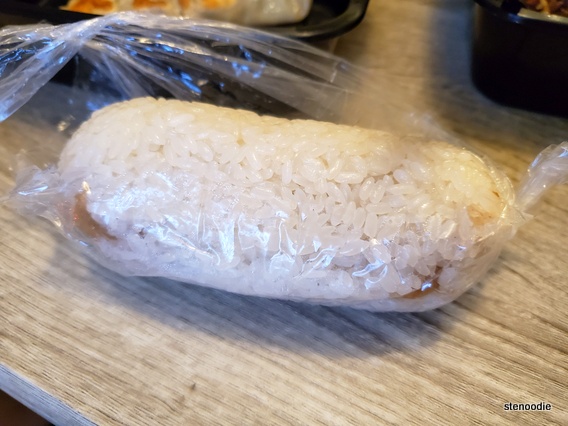 The Steamed Savoury Sticky Rice Roll (鹹粢飯) is another classic appetizer to order.  It is a long roll of sticky rice that is wrapped around pork floss, preserved vegetables, and a deep fried dough stick.  The exterior sticky rice is chewy while the inside is slightly crunchy and savory.  It’s a snack that you need to eat when it’s hot otherwise the sticky rice will become overly hard and dry. 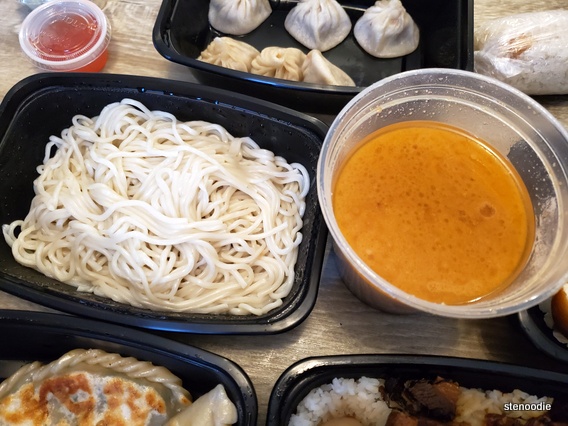 The commonly called “dan dan mean” or Soup Noodle with Spicy and Peanut Sauce (擔擔麵) was also rather disappointing here.  The soup base is the indicator of success for this noodle soup and here, the peanut sauce was just not thick enough.  The noodles were placed in a separate container from the broth (with a smaller container of the green onions and preserved vegetables on the side).  While the noodles were decent, the peanut soup just did not live up to its classic counterpart; it was too watery.

Spicy and Sour Soup (酸辣湯)!  The name says it all.  It’s made with black fungus, tofu strips, egg drop, and some meat in a thick consistency.  (Oops, I forgot to take a photo of the soup itself.  We got a large size, $10.25.)  This spicy and sour soup was pretty good.  It had a good uniformity of ingredients with the right amount of spiciness and sourness to it. 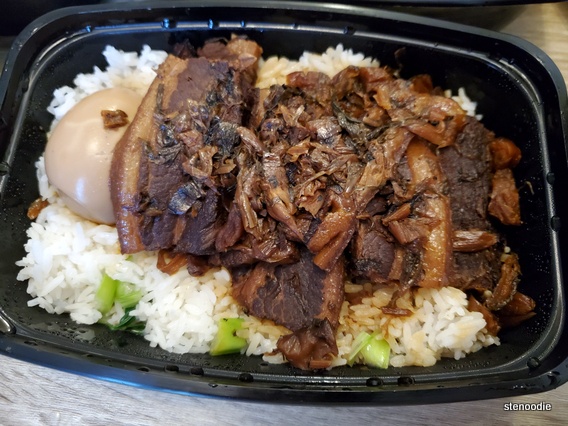 Lastly, the Stewed Pork and Preserved Vegetable with Steamed Vegetable Rice (梅菜燒肉菜飯, 附湯及滷蛋) was also served with soup (corn egg drop soup) and marinated egg.  This was a favourite at our dinner table that night.  We don’t eat preserved vegetable and stewed pork often, but it is such a savory and umami dish due to the strong flavour and saltiness.  The stewed pork was tender and fatty in the right places.  The steamed vegetable rice could have been made better (I’ve had better ones with more bok choy in the rice in the past), but the combination of the stewed pork and vegetables made for a very delicious rice dish.  The corn egg drop soup was nothing too spectacular (they could have filled up the container more). 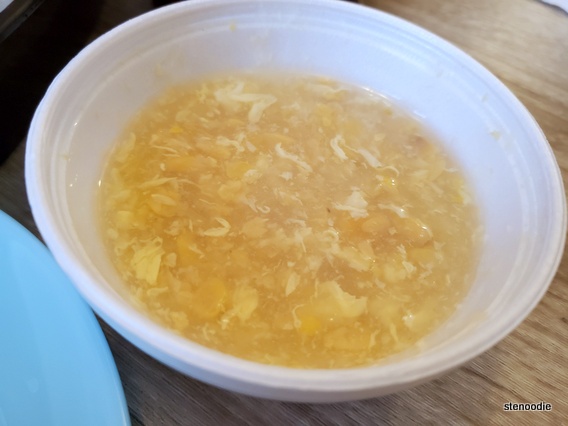 All in all, it was a decent dinner that was very filling.  However, I can’t say that Ding Tai Fung has the best tasting Shanghainese dishes.  It’s better to go to the aforementioned Golden Shanghai or Shanghai Dim Sum for better flavour and price. 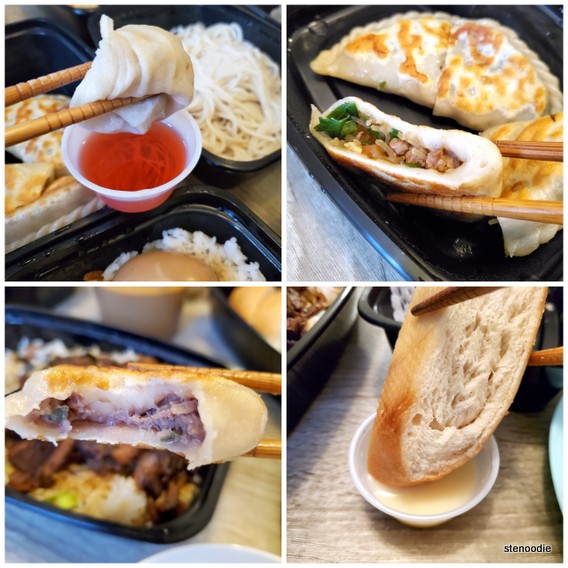 Some close-ups of the items