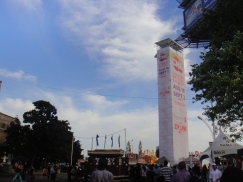 Last night I attended the Canadian National Exhibition, CNE for short, with 4 other friends in search for the weirdest and wackiest food creations. CNE is an annual end-of-summer fair that is half carnival and half food fest. Actually, it’s more like an exhibition grounds for your typical carnival rides and games, a petting zoo, arts and crafts shows, various performances, and more. The food building is merely just one aspect of it, but to me, a foodie at heart, this was the perfect night to go a little crazy on the #foodporn possibilities.

This was the first time I’ve been to the CNE in the evening and admission is such a deal for just $5 per person after 5 pm. The usual crowds were thinned out and the night was so perfect with the nicest summer breeze. 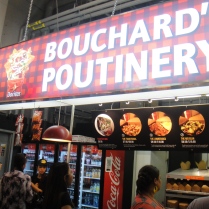 Taco in a Bag

We tried “Taco in a Bag” from Bouchard’s Poutinery first. Joyce had tried it a few days ago and said it was tasty, and it was! They literally put shredded cheese, guacamole, jalapeno, sour cream, seasoned ground beef, salsa, and lettuce into a Doritos bag (they crunch up the chips that are inside first) and served it to you. I wish I had more bites of it though lol.

Next, we tried another recommended food from Spread Nutellerie called “Jalapops”. I had no clue what it was from the name when I first heard it, but it turned out to be one of the best things I’ve eaten all night. Basically it was a jalapeno cheese popper smothered with Nutella on top! Great combination and it was so good 🙂 Cheese and jalapenos never fail to please. 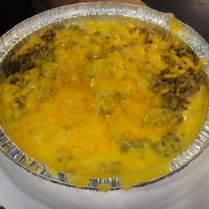 While waiting for the “Cheeseburger Mac” at Mac & Cheesery, the person at the counter suddenly announced, “First one to say so gets a free bacon mac!”, our dear Holly shot her little hand up and we got to try their Double Bacon Grilled Cheese sandwich for free! It was so delicious with a giant pickle and Miss Vicky’s chips on the side. (I’m writing this on the commute ride home right now and am drooling inside just reminiscing about it; it was that good!). Not so satisfying was the actual item we ordered. The Cheeseburger Mac didn’t look like anything in the picture. It was basically a tin foil pan of macaroni cheese noodles in cheese sauce and some meat. It was meh but filled us up super quickly due to the sheer size and cheesiness. 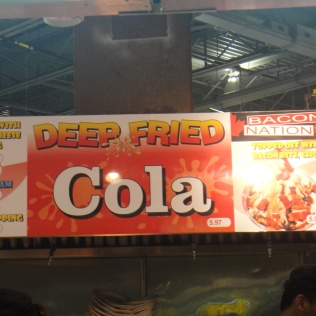 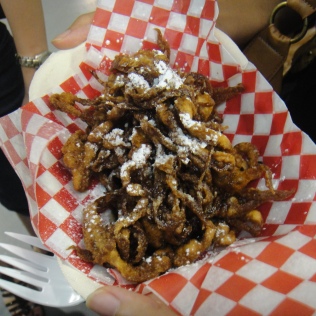 Three of us, the October babies, tried the infamous fried cola. It was basically deep fried batter covered in powdered sugar with a dose of actual coke on top. The other two in our group were pretty grossed out by it and refused to try any, but us Libras enjoyed this unique dessert. It reminded me of funnel cake batter with a taste of coke. Not bad at all. 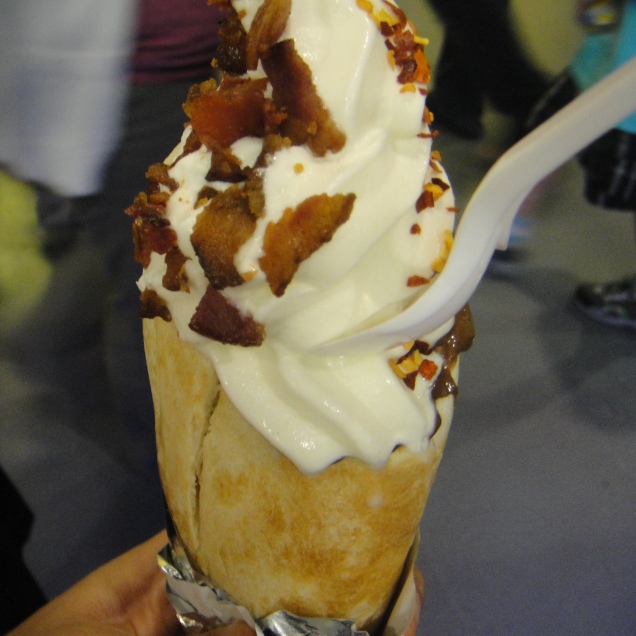 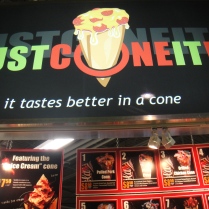 The pizza crust cones waiting to be baked 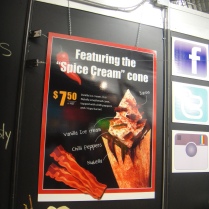 We chanced upon the “Spice Cream Cone” from the Just Cone it! vendor which tag line was “It tastes better in a cone”. It’s their featured cone where pizza dough is baked into an ice cream cone shape and filled with Nutella, vanilla soft serve, bacon bits, and sprinkled in spicy chili flakes. It was the wildest dessert I’ve ever tried. As you bit into it, you taste the super cold vanilla ice cream followed by chewy bacon bits before you can feel the spicy aftertaste of the chili flakes. We all really enjoyed it. The pizza crust was hard and cold; we expected soft and warm (hahaha dirty joke anyone? 😉 ).

run by an Asian vendor… naturally

Finally, we finished off with some bubble tea to quench our thirst (typical Asian shop — no need to comment on) and a DEEP FRIED TWIX BAR!

It might sound disgusting, but it’s really like one of those deep fried bananas that you get at a Japanese restaurant for dessert. It looks like a fried corn dog. When you bite into it, the batter is soft and the chocolate covering of the actual Twix bar inside is super hot! It blended well together and was a great dessert. Nothing too crazy tasting after all. 🙂

The almighty Food Building! *bows down to it*

To say the night was a great success is an understatement. The five of us were able to try many different varieties of what CNE offered this year. Alas, we weren’t able to taste the 7500-calorie “Cronut burger”, but that was all good since there were over 100 cases reported of food poisoning just the night before and the food vendor was voluntarily closed for that reason. Let’s see what crazy but delicious food stuffs the CNE brings next year! 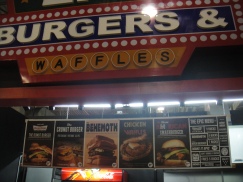 Also, check out what Holly thought of our food adventure at the CNE too!