Posted on September 2, 2015 by stenoodie 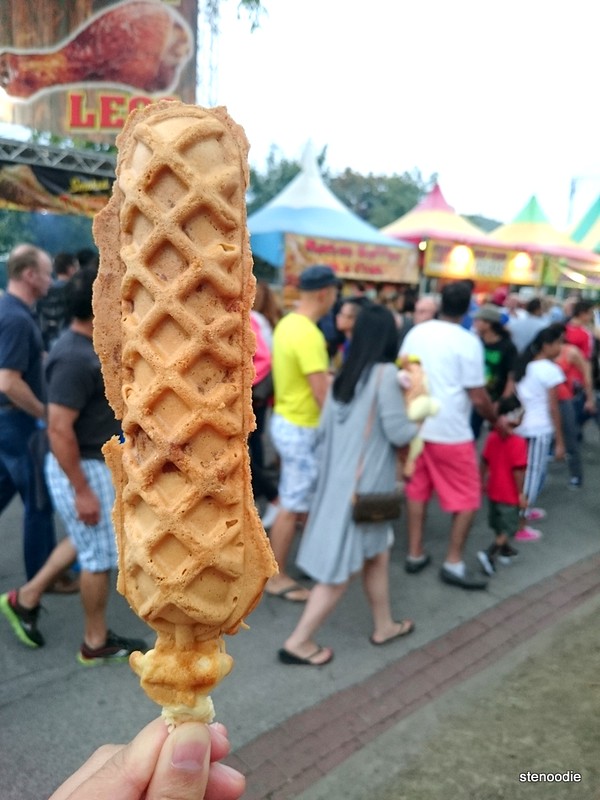 It’s that time of the year again!  Eating crazy food at the Ex!  The Canadian National Exhibition has been promoting some off-the-charts crazy food creations in the recent years and most of us foodies fall for it because it not only looks delicious but seems crazy to try.
You get a lot of weird combinations that might taste good but on the whole, it is a risk to take.

The last time that I was at CNE was actually two years ago.  (I didn’t really care about attending it last year in 2014.)  During that 2013 visit though, me and my foodie friends definitely indulged in some crazy food creations and had a blast. 😀

This year, we had a group of around 13 people and the first place we hit up as soon as we arrived on the fair grounds was the Food Building.  It was also fitting because some of us had been stuck in downtown Toronto traffic for 2.5 hours that day before arriving and finding parking (the TFC and Blue Jays were playing too). 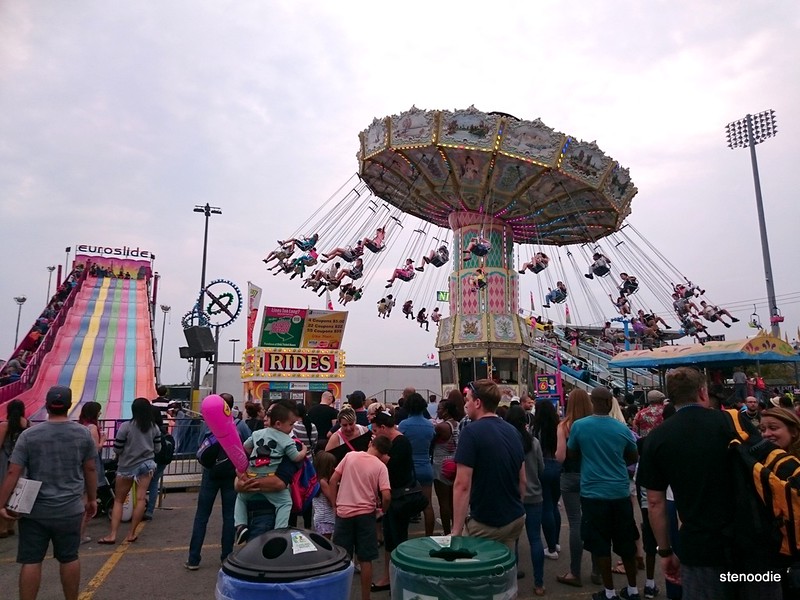 Great day to be at The Ex!

We had seen the BlogTO article and already had some select food creations we wanted to try in mind.  There were a lot of food vendors inside the Food Building and it was very hot in there.  Either it was because they didn’t turn on high enough AC or that there were just too many people and moving body heat inside the building.

The first food we lined up for was the Bacon Wrapped Grilled Cheese Sandwich from Bacon Nation.  The line-up was sizable but kept moving along even though we were all sweating bullets.  A couple of our friends went off to find other food since it didn’t make sense for all 10+ of us to line up for the bacon goodness. 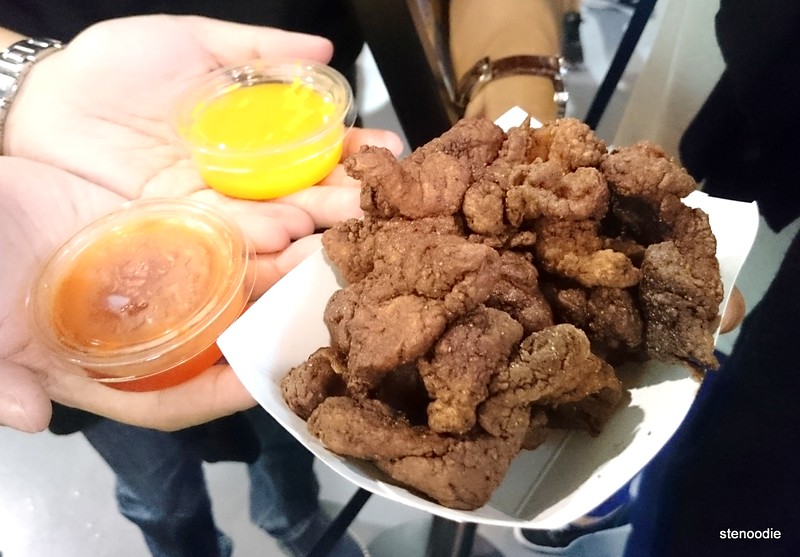 They came back before it was our turn to order (I guess the line for Bacon Nation was quite long after all) and brought a basket of chocolate fried chicken for us.  It came with a mango and spicy sauce.  It was interesting!  (Sorry, I didn’t get the name of the vendor that sold it, but I am taking a guess that it is from Coco’s Fried Chicken since they had this at the CNE in 2014.)  It actually didn’t taste much like chocolate at all because the morsels of chicken were fried to a crisp and it was dry on the outside.  The fried chicken itself was decent and it tasted good (probably because we were fairly hungry).  The mango sauce was good and the spicy sauce gave it a kick. 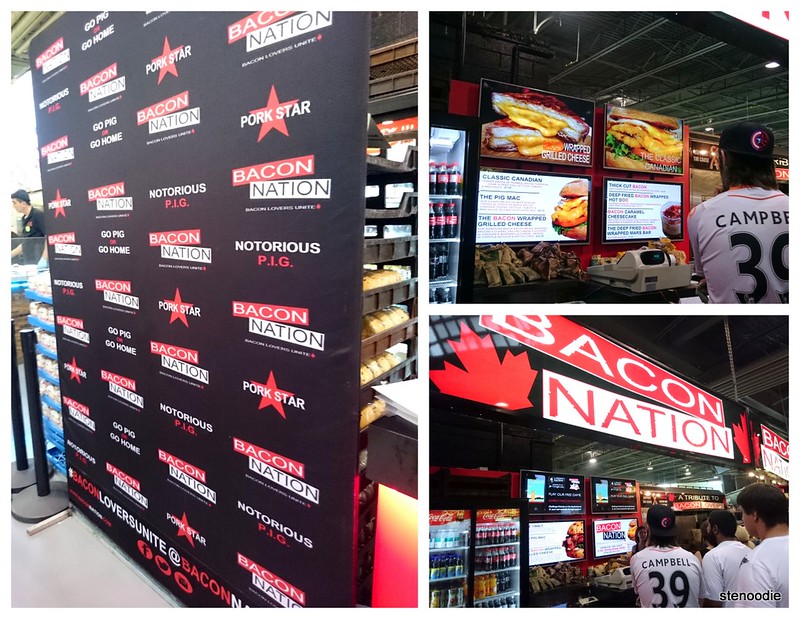 Bacon Nation! All hail the bacon! 😉

Soon, we got our Bacon Wrapped Grilled Cheese Sandwiches.  We ordered three sets which came with pickles and small bags of chips and there was enough for two people to share one sandwich.  This was actually so delicious!  The strips of bacon were fried so that they were crispy and weaved around the exterior of the grilled cheese sandwich perfectly.  The grilled cheese sandwich was gooey and hot and the entire combination tasted so good!  They also had a side of chipotle ketchup that you could dip the sandwich into.  It didn’t taste heavy at all and I was so pleased with the taste! 😀  I understood why there was such a long line-up for Bacon Nation now. 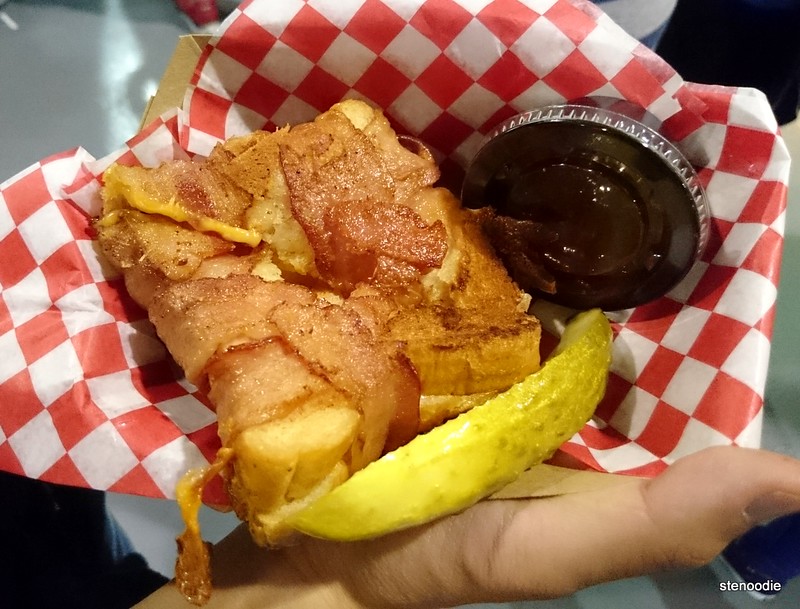 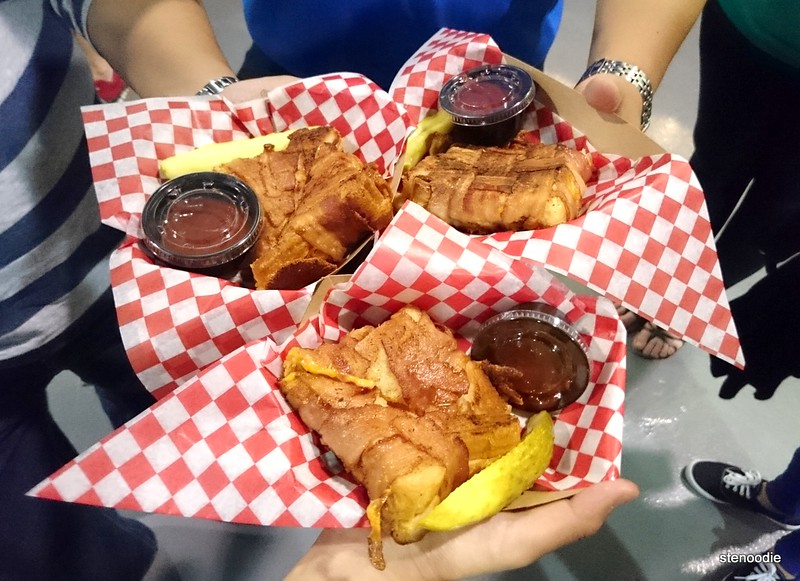 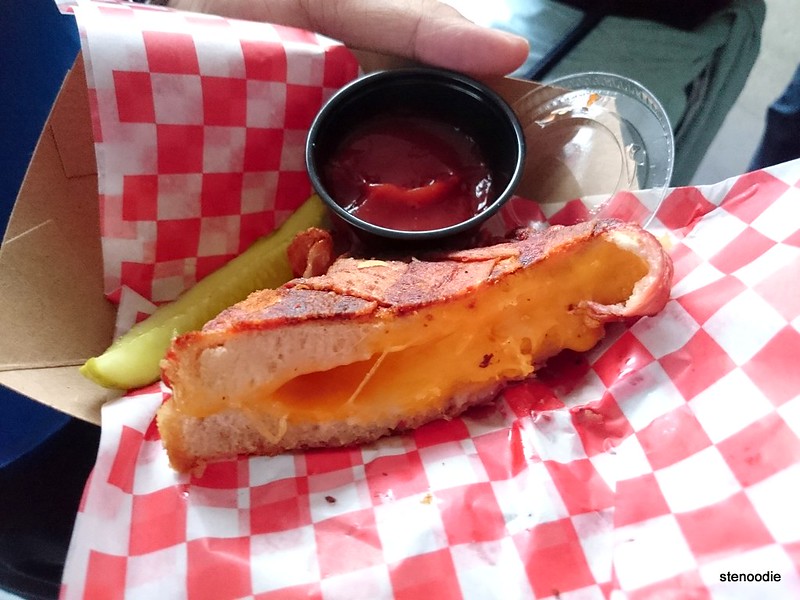 The gooey cheese inside the grilled cheese sandwich

Since the Food Building was so steaming hot, we ventured outside to find the Chicken and Waffles on a Stick since most of us were very curious about this food item and also to cool down before we ate more food from the Food Building.

Chicken Waffle on a Stick!

So sad.  I really thought that this creation had a lot of potential.  All they needed was gravy or some kind of chicken-friendly sauce on it and it would have been very tasty.  I did finish mine and when I got to the end with the waffle batter, I thought the batter itself was pretty good.  But still, there wasn’t enough chicken in there and the chicken was dry!  At least if the chicken portion was generous and juicy, it would have been a great food item.  Alas… 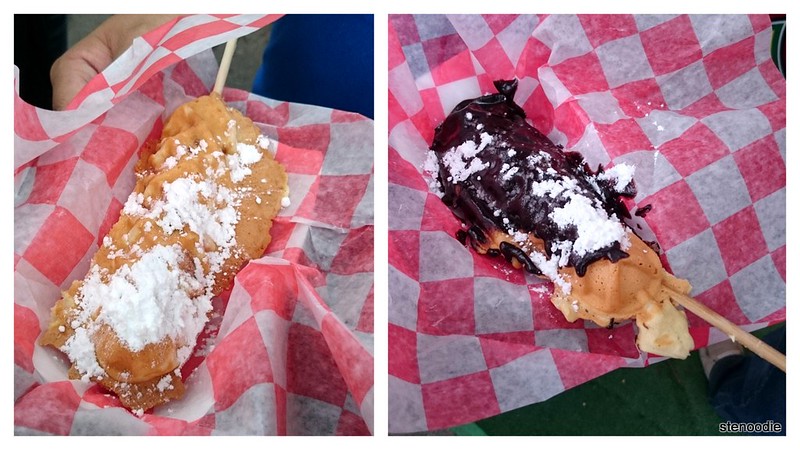 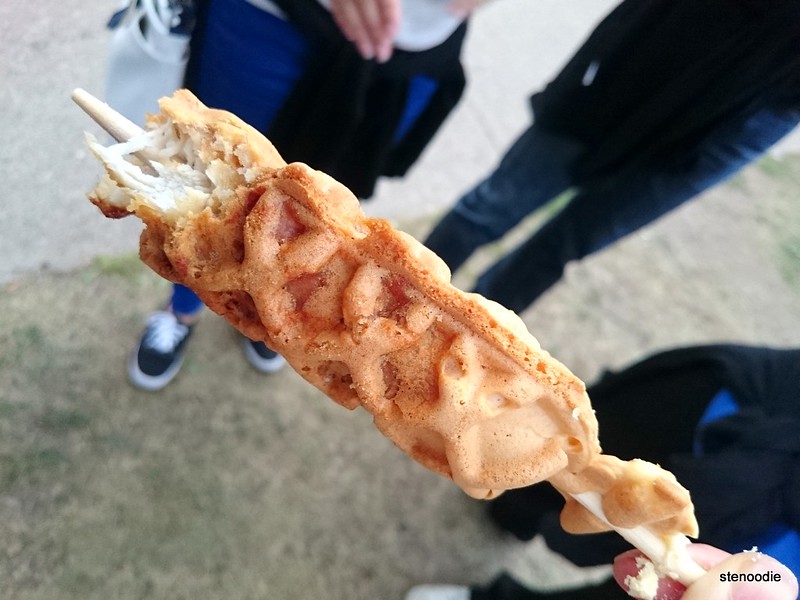 Chicken and Waffle on a stick. $8 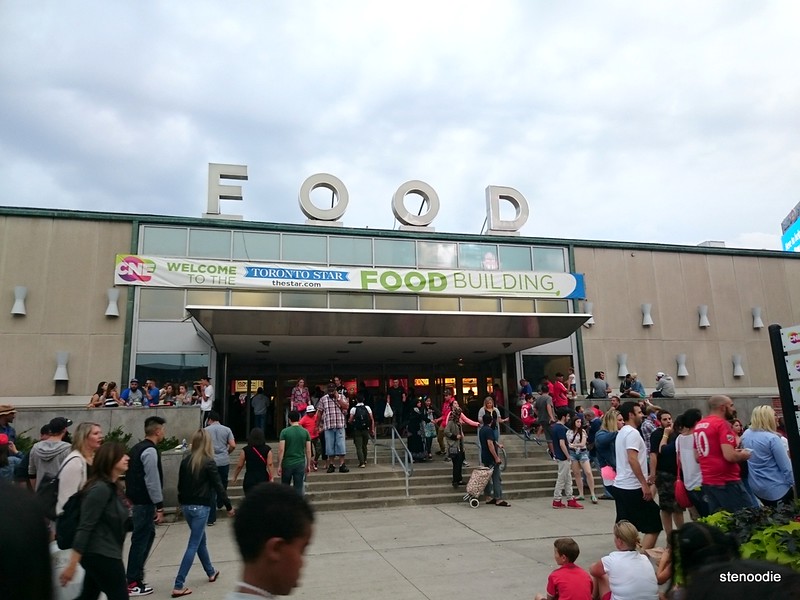 The majestic food building! All hail 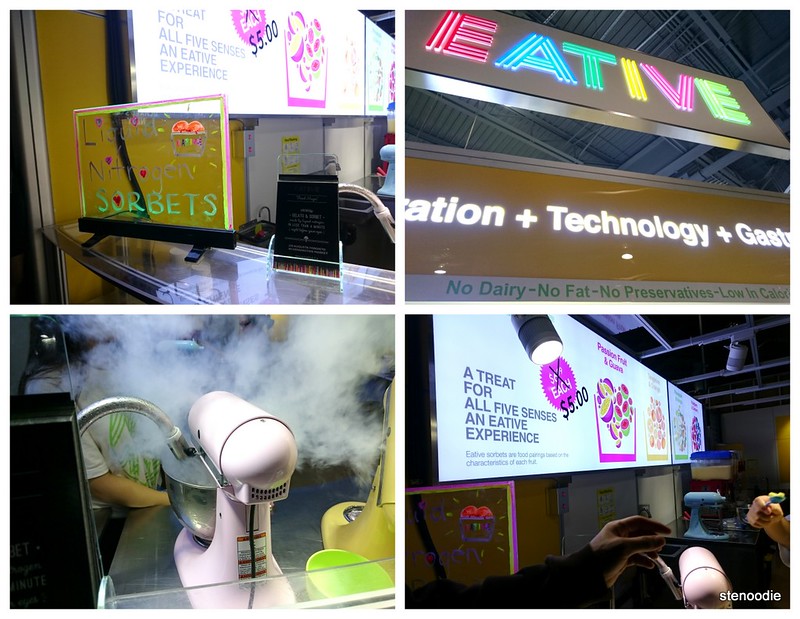 We collected a few more friends with us this time and we headed back inside the Food Building.  This time, we split up.  Anh and I went on a mission to find the Jamaican Patty Burgers from Bub’s Bad@ss Burgers.  Before that though, we got a sample of peach sorbet from EATIVE and tried their liquid nitrogen sorbet.  It was rather good!  I’ve only had liquid nitrogen ice cream before (at TO Food Fest), but not sorbet.  It was very smooth and rich in taste! 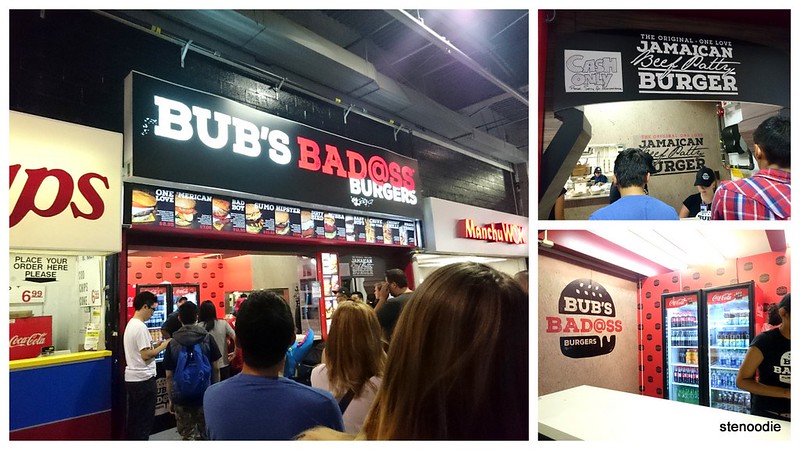 There was a line-up for the Jamaican Patty Burger too but it moved very quickly.  For just $10 including tax, we got our Jamaican Patty Burger!  Yay!  We split it up with a knife and I was amazed with how juicy and tasty it was!  Instead of a normal burger bun, they used the pastry of a Jamaican patty as the buns (most of us thought it would have been actual beef-filled patties). Bub’s Bad@ss Burgers actually specializes in this type of burger and they have two types of burgers where they use Jamaican patties as the bun.  We ordered the One Love (original) Jamaican patty burger. 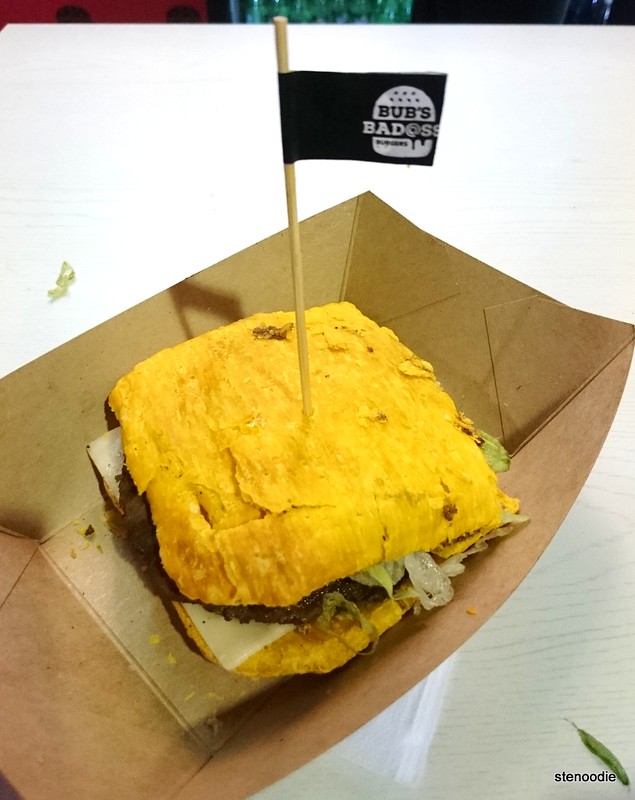 It was delicious!  Everyone had a taste/bite of it too and really enjoyed it. 🙂  Something about using a Jamaican patty as the top and bottom buns made the meat taste so much better and juicy.

Sarah got the Dutch Fries that she loved when she was at CNE two years ago.  I tried it and it was pretty good!  There was a little heat to it! 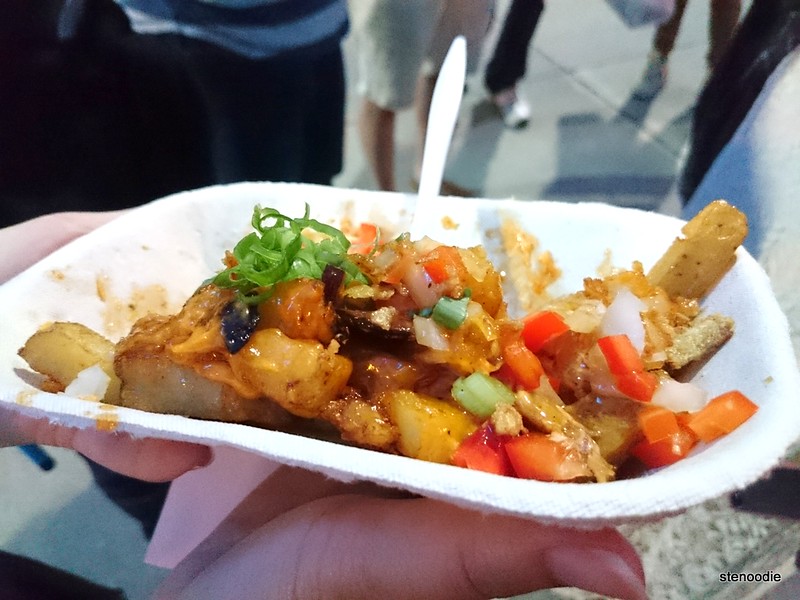 Christian got the kimchi poutine from somewhere.  I tried it and I liked how big the beef slices were and how the kimchi actually tasted really good.  Mmm, yum! 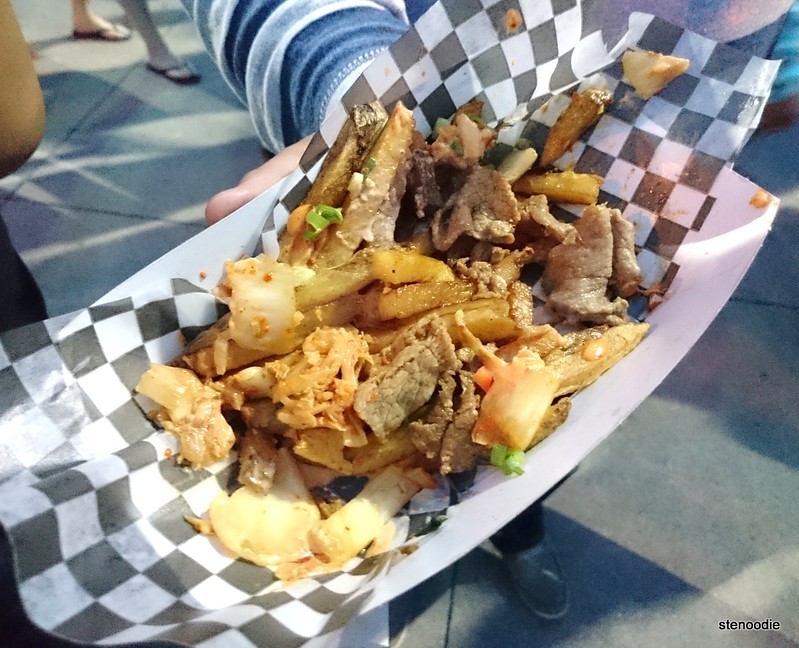 We were a little full by this point but waited around a bit more.  Sarah also got ice cream from Baskin Robins.  The pralines and chocolate mint ice cream were good and she got double the scoops that she asked for too! XD 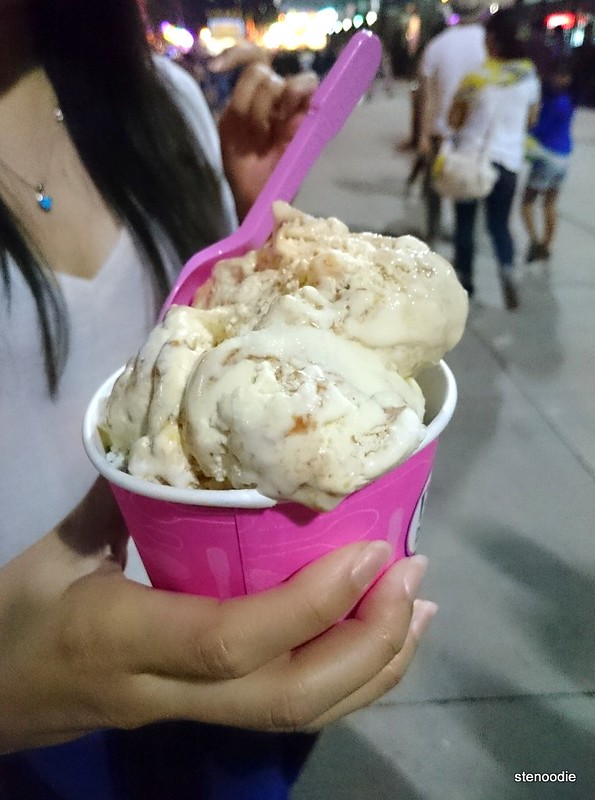 After this, it was 8 p.m. and getting dark outside.  We headed towards the Midway to play games!  All the girls just watched the guys play and it was entertainment enough. 😛 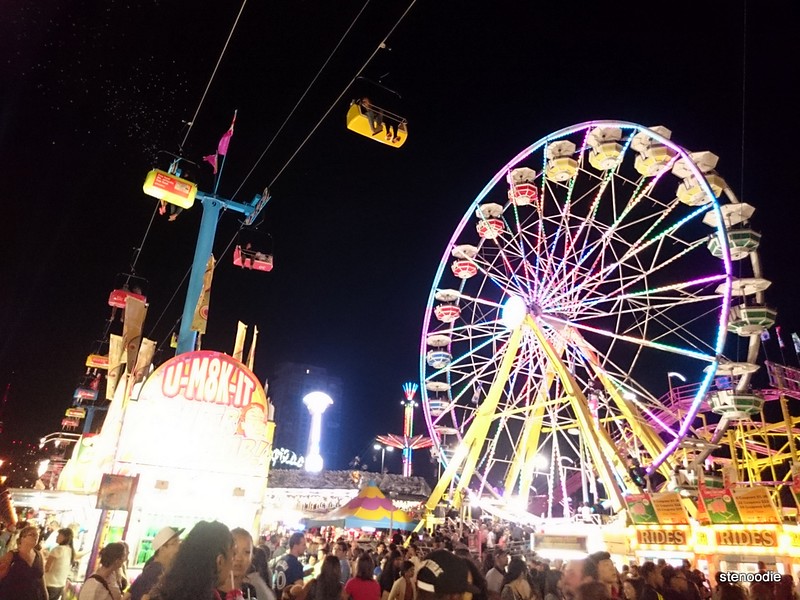 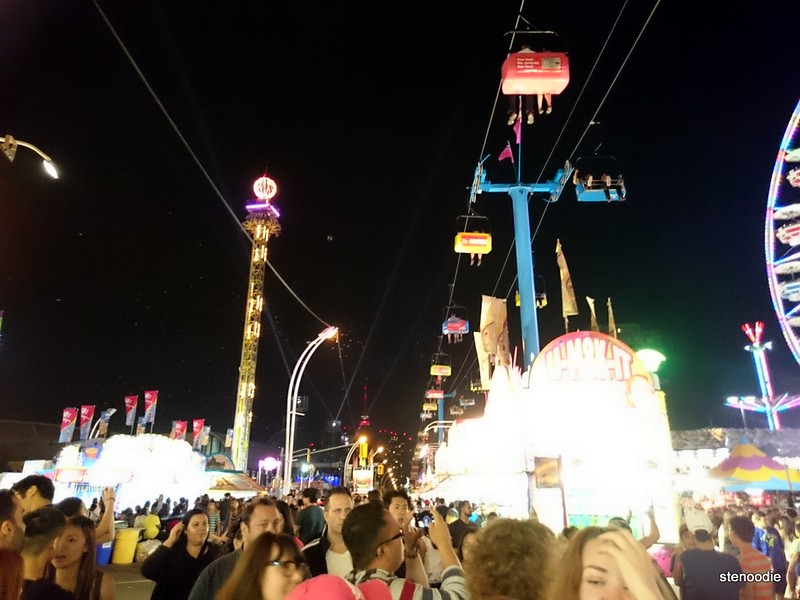 The Midway with the above ‘skylift’ 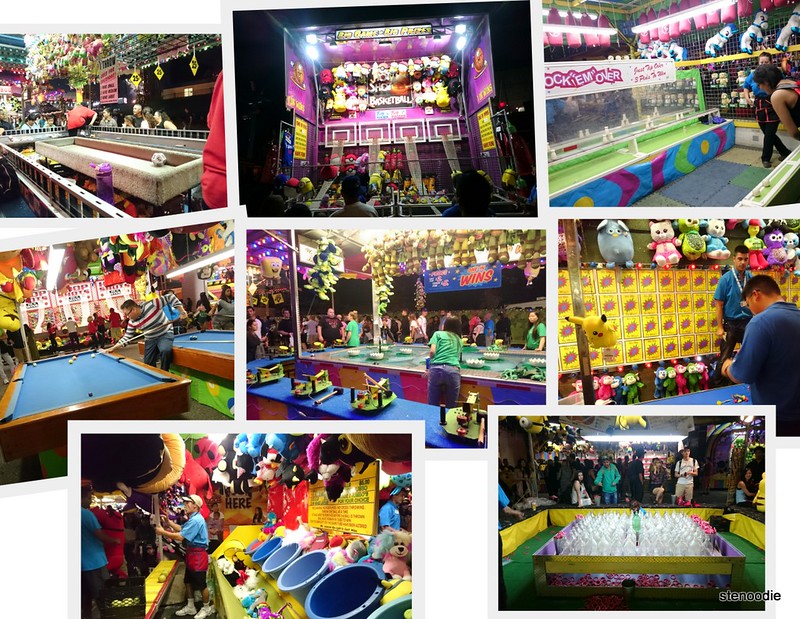 These are some of the games that are at CNE 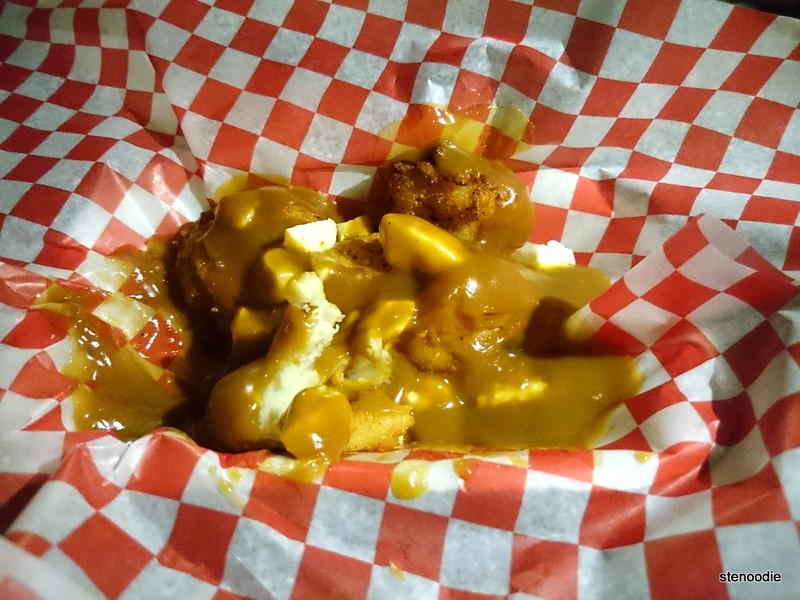 The last food item of the day went to the Poutine Balls.  This was another one of the “crazy food” items that arrived at the CNE this year.  I got to try a little bit and I loved how amazingly good the gravy in this was.  The poutine balls were basically fried balls with potato, cheese, and gravy inside.  It was like a poutine inception.  XD  Regardless, it was very good (but heavy, so you need to share this).  Its gravy would have been a perfect match for the dry Chicken and Waffles on a Stick too!

Oh, one more thing.  I also tried the pineapple juice from Drink a Fruit From a Fruit that Wayne had.  The juice was in an actual pineapple and was so thick and sweet!  You could also get watermelon or coconut juice. 🙂 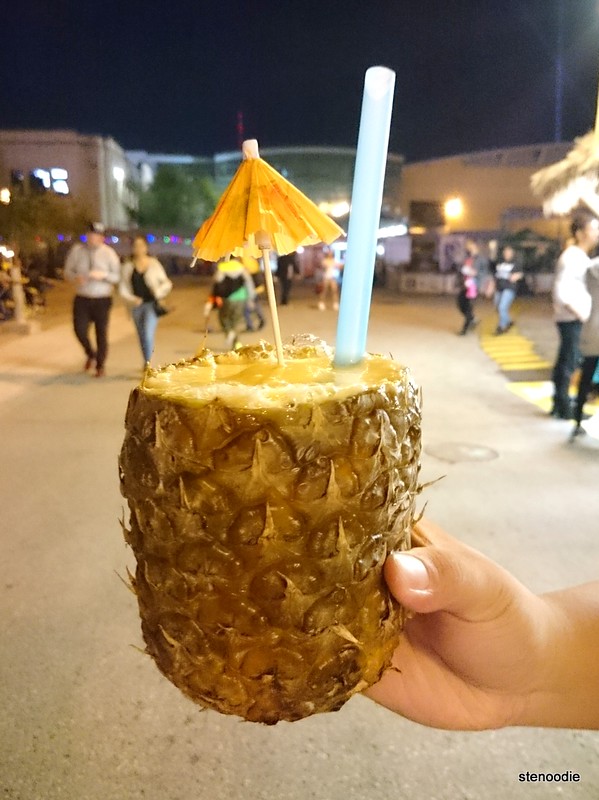 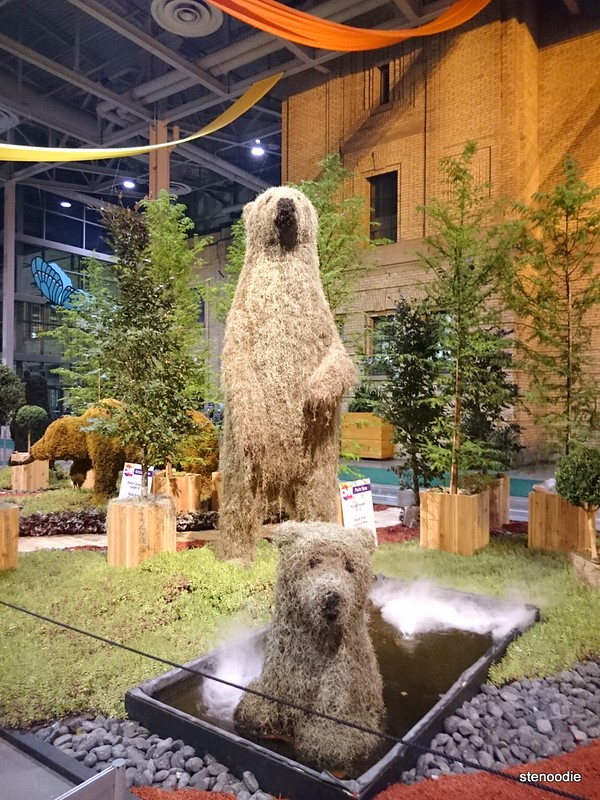 On display at the convention hall 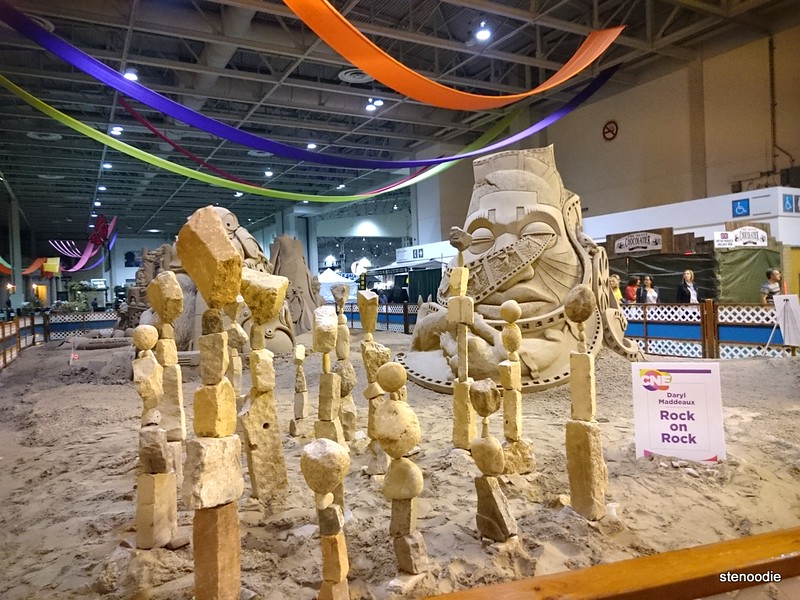 I actually remember seeing these the first time 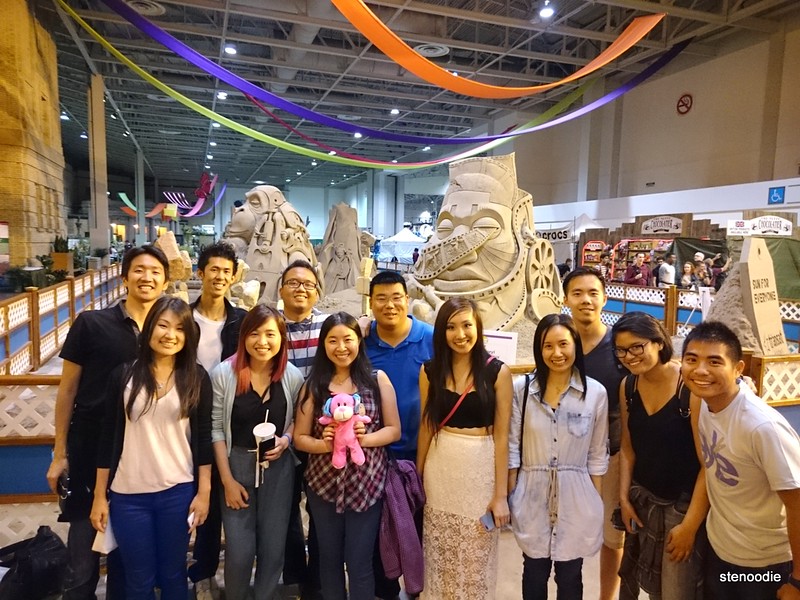 And there we have a summary of what we ate and fried at CNE 2015!  I would have liked to try the snow crab fries, red velvet fried Oreos too, and other food creations too, but it was already a great full night of fun and eating with amazing friends.  What I also liked was how we were such a big group but everyone got along so well together.  There was no drama about who wanted to do what.  Everyone was so easy-going and chill. 🙂  Can’t wait for more foodie adventures! 😀