Posted on September 8, 2017 by stenoodie 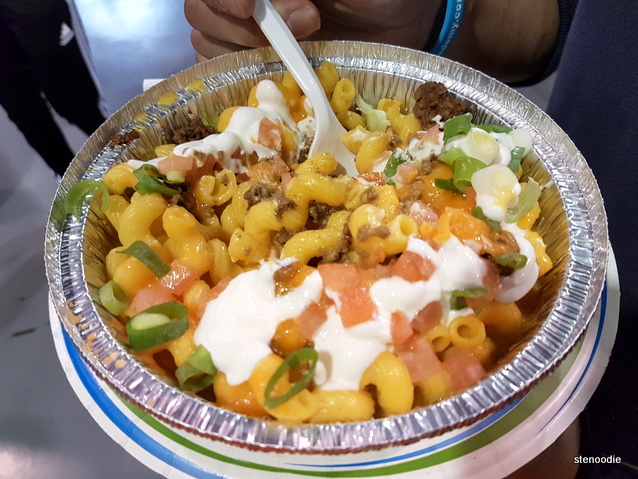 My food adventures at the Canadian National Exhibition (CNE) this year were quite tame.  Nevertheless, the food was still good.

When we got to the Food Building around 1 p.m., the building was packed as always.  I had a bit of a sore throat growing so I was on the search for some comfort food that wasn’t too spicy or fried so as to limit further irritation of my throat.  I decided to get mac and cheese!

Mac & Cheesery has been a vendor at the CNE as far back as 2013 (I remember because we tried something from there that year).  I ordered their Taco Mac which was macaroni topped with taco-spiced beef, cheese, diced tomatoes, green onions, and sour cream.  The line wasn’t too long and for $11 after tax, the size of this was huge!  It was in an aluminium container and quite weighty. 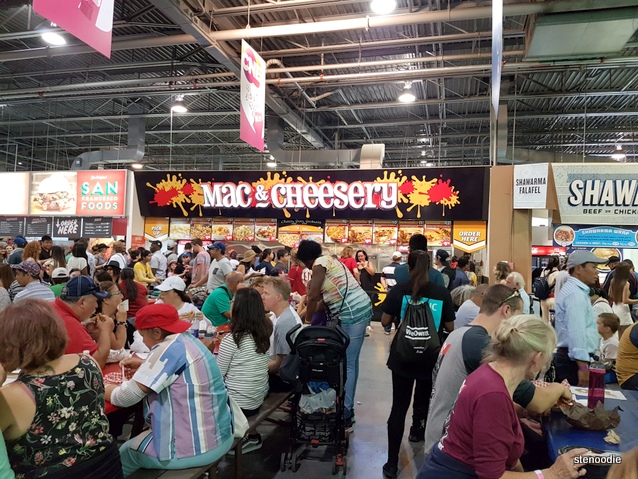 Mac & Cheesery inside the Food Building 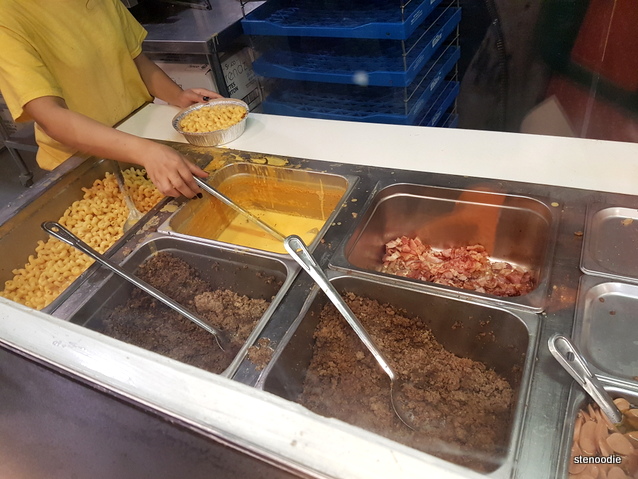 Watching how they make the mac & cheese

I loved the taste of this!  The macaroni was cooked so that it was tender and soft; the way I like it.  The toppings all combined together to form a taco-like taste for the entire pan of mac and cheese.  It was so delicious!  The cheese was melty and so tasty too. :9  I was so impressed and so satisfied with this dish! 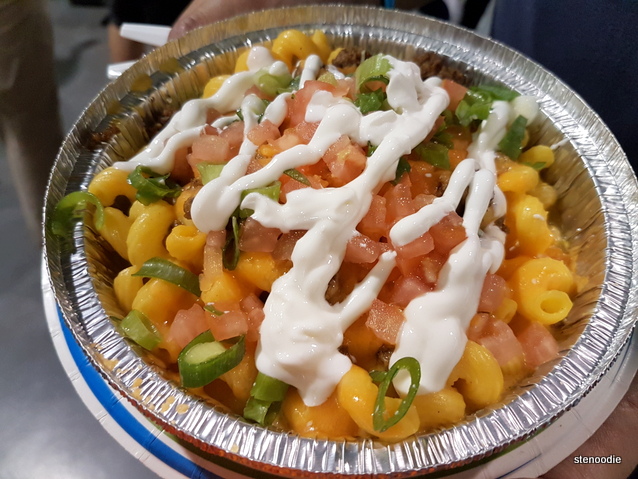 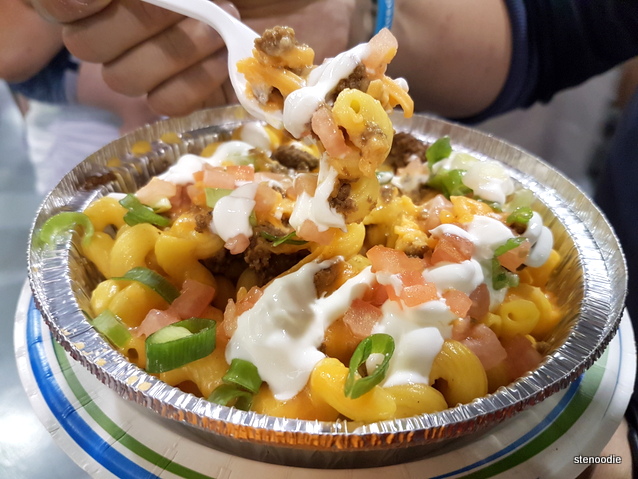 Ken got the Karaage bento box with Japanese curry from the Tokyo Hot Fried Chicken vendor.  It was served with purple rice and sauce.  It was Japanese fried chicken marinated in soy, garlic, ginger, and sake.  There wasn’t much of a line-up for this vendor. 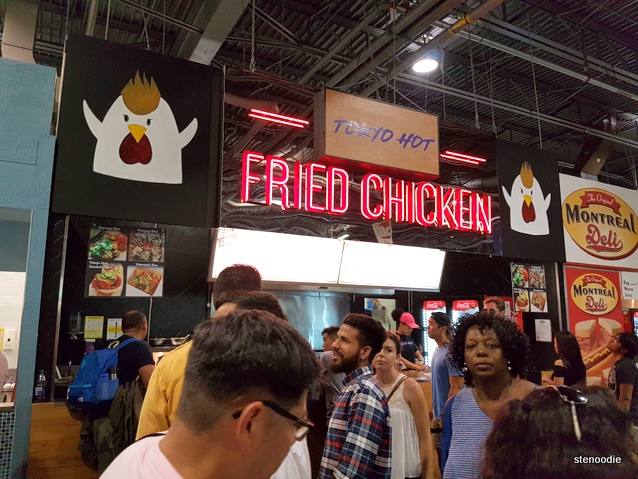 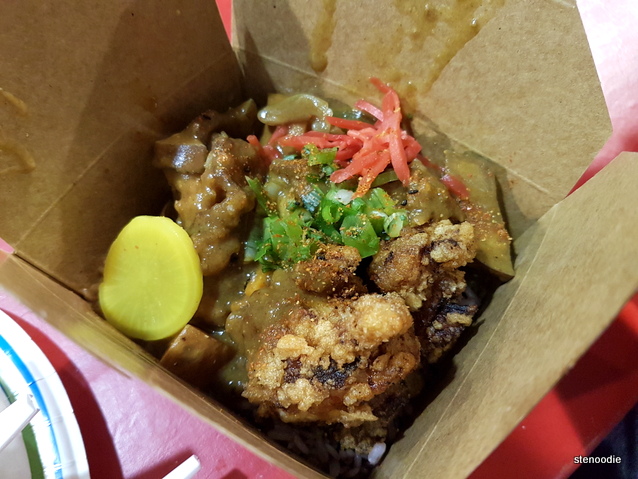 The curry was spicier than I thought and the karaage’s crispiness was dampened by the curry sauce in the box but otherwise the morsel of chicken was quite chunky and substantial.

When we were in the games area of the CNE, I saw the much-talked about new Deep Fried Cheese Curds vendor for this year!  I had wanted to try this after hearing about it but since my throat wasn’t feeling its best that day and we weren’t ready to share the large portion between the two of us, I let it go. 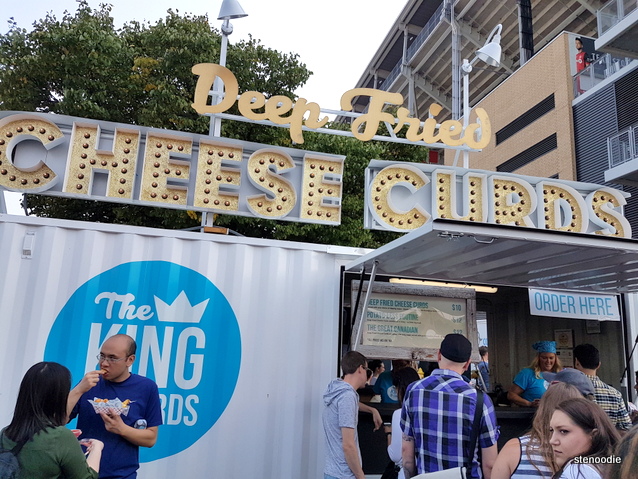 When we returned to the Food Building later that afternoon for some ice cream, I saw the Japanese Street Food vendor that was selling another one of this year’s “crazy food” items, a ramen burger called “Last Samurai”.  It had heard its lines were an hour long! :O 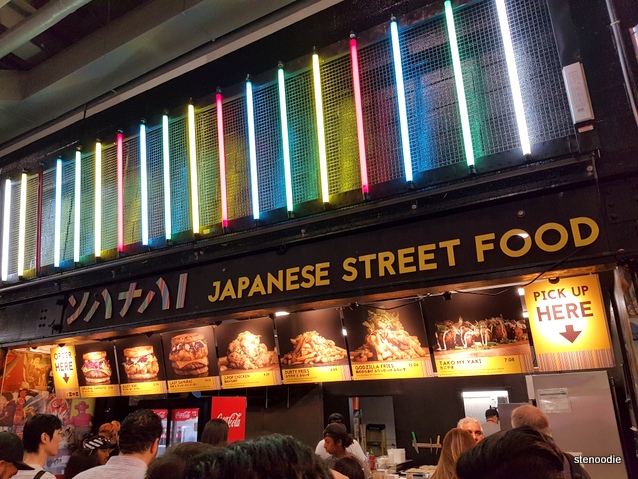 Ken got a large lemonade from an ubiquitous lemonade stand — Terry’s Good Old-Fashioned Lemonade.  I thought that it was quite watered down.  It was thirst-quenching for sure though. 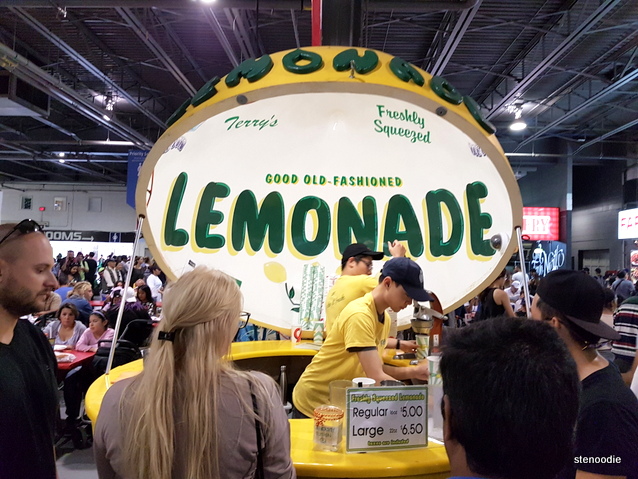 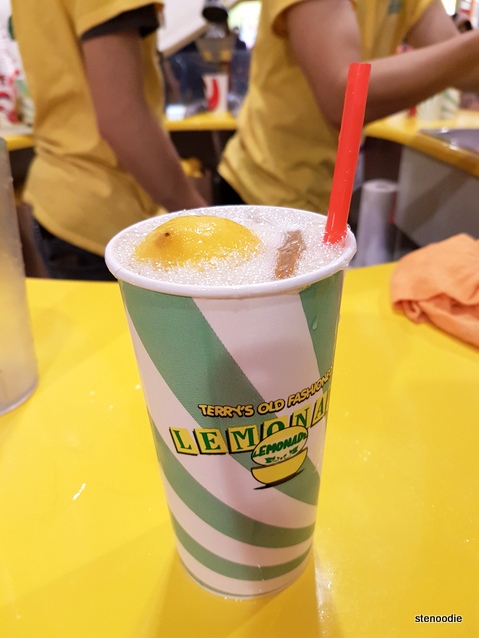 After some searching (why is the Food Building so difficult to navigate XD), we found Eative.  I actually had tried some samples from Eative in 2013.  Here, we ordered the Dragon Breath liquid nitrogen gimmick and the liquid nitrogen sorbet in Lychee & Guanabana flavour. 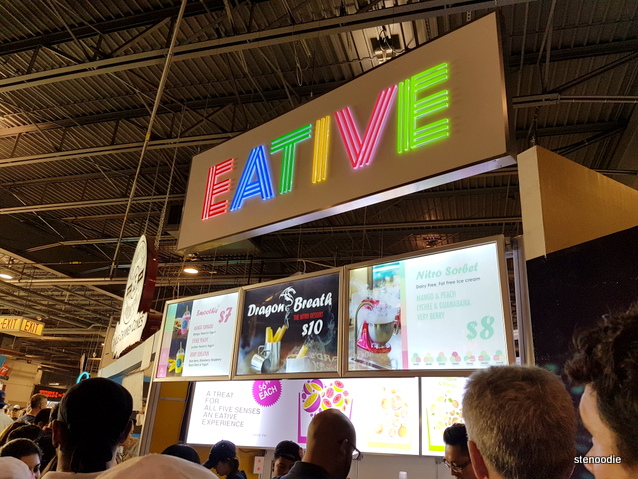 Eative inside the Food Building 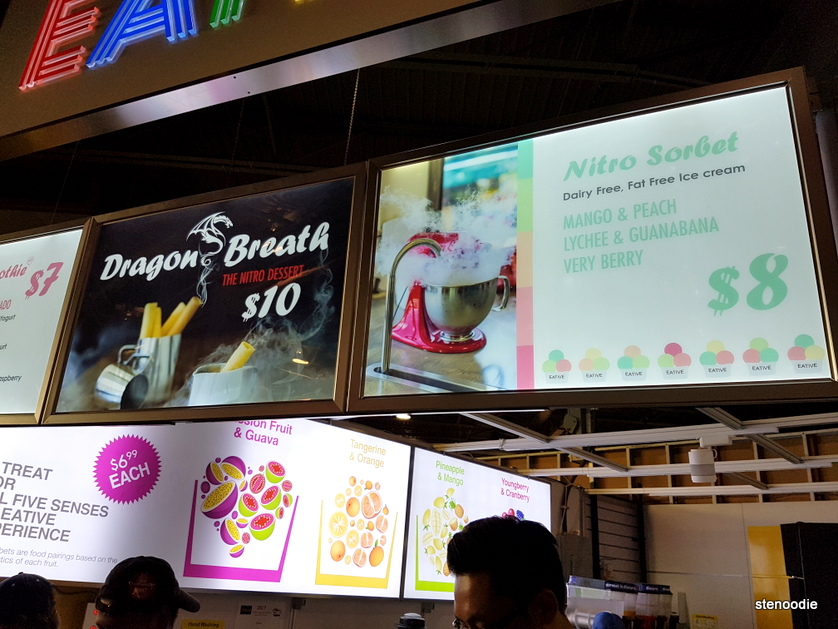 Menu for their liquid nitrogen treats 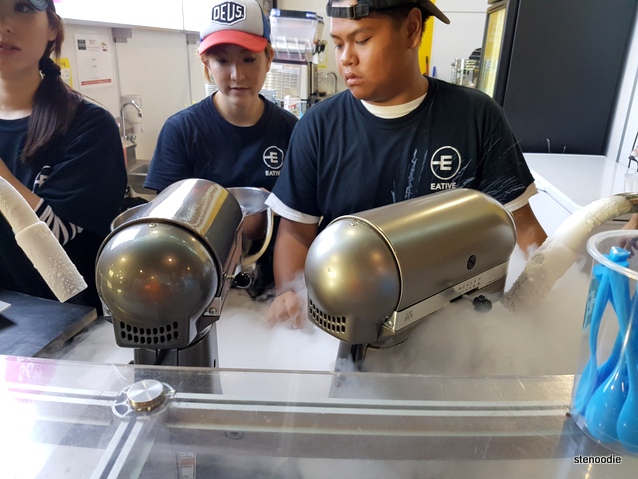 First, we read the instructions for the Dragon Breath treat.  I had had liquid nitrogen ice cream before but hadn’t tried their frozen treats before.  The gimmick for this was so that you would have liquid nitrogen smoke coming out of your nose. 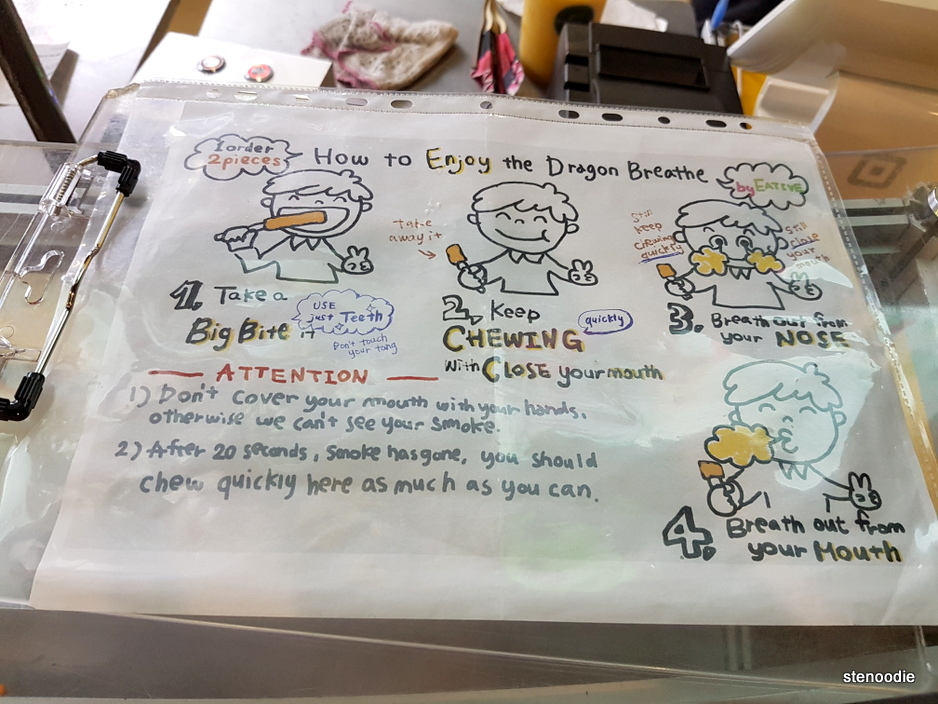 Instructions for the Dragon Breath

I liked that the female staff there knew that we would have it photographed/videoed so she gave the two treats to us separately.  So thoughtful! 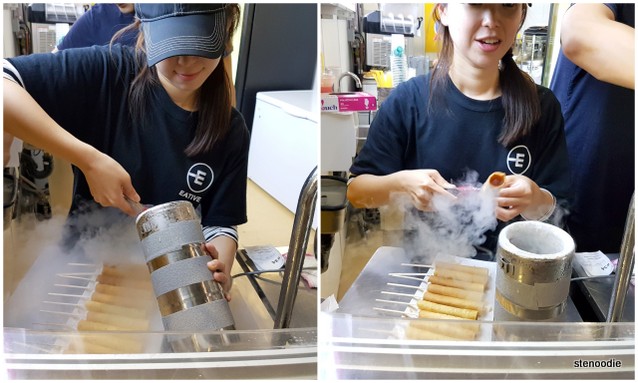 Dipping the cream-filled spring rolls into the liquid nitrogen

The point was to chew the Dragon Breath treat and then breathe through your nose.  It was hard not to open my mouth and smile or talk while doing it otherwise the smoke would have all escaped. XD

The actual experience itself is kind of underwhelming.  You don’t really feel the liquid nitrogen coming out of your nose because it’s just cooler air.  You can’t see it for yourself either.  Only others around you really get to see you experience it.  I’m glad we took a video for each other to see it afterwards. XD 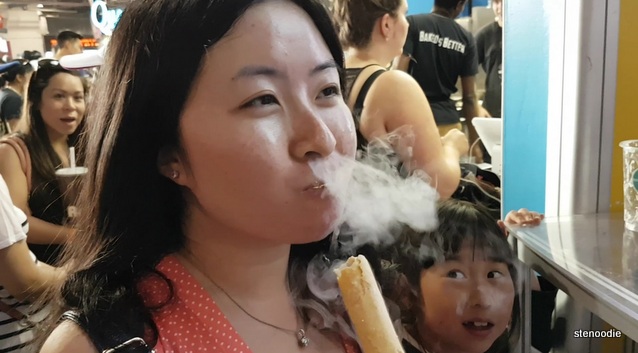 The treat itself was a spring roll with cream inside of it.  It was an interesting experience for sure though.. but definitely overpriced.

The Lychee & Guanabana flavoured liquid nitrogen sorbet was delicious!!  It was so refreshing and tasted like lychee (not sure about the ‘guanabana’ part).  It was a thirst-quenching dessert.  They had these really sturdy blue plastic spoons for the customers too; I thought it was a little bit too sturdy for disposable spoons…  (Also, this sorbet was also overpriced at $8 a cup…). 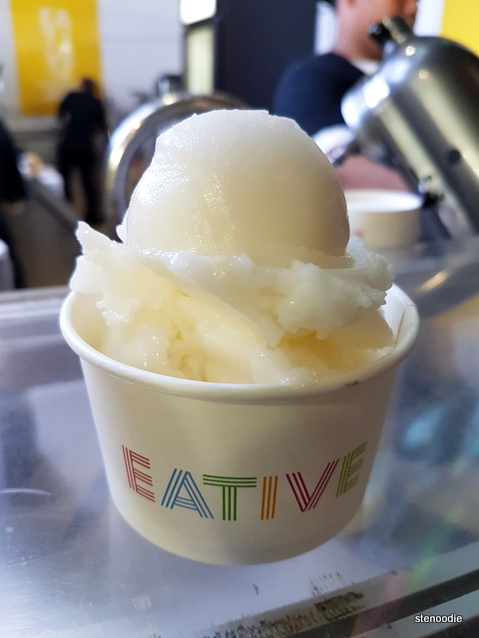 I’m glad that I tried those items at the CNE.  This year’s selection was quite impressive but I didn’t even go after everything.  Let’s see what next year brings. 🙂

3 Responses to Food Adventures at CNE 2017