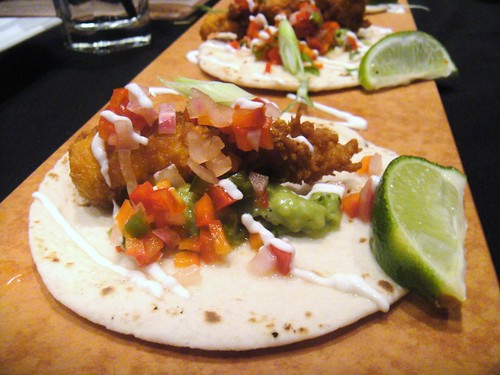 My friend Clarissa held her bachelorette party last weekend at West 50 Pourhouse & Grille in Mississauga.  We had our own private room for over 25 guests.  It was a nice secluded area for us to mingle, eat, and catch up.  An interesting part about this restaurant is that after 9:30 p.m., there is a live band playing and it turns into a lounge/club where there is a $5 cover charge for dancing.  It’s pretty cool! 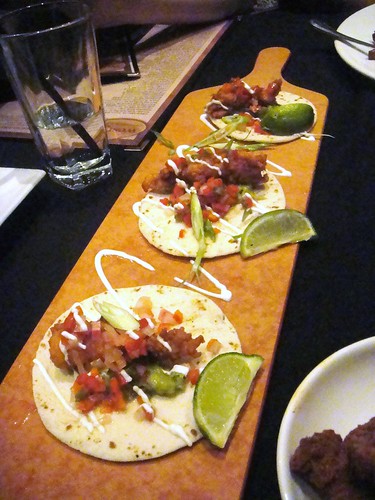 We ended up ordering some appetizers to share — the best way to dine out in my opinion because you get to try so many different dishes in one sitting. 😀  Instead of a main, I ended up choosing another appetizer since the mains didn’t really appeal to me.  Sometimes, I think that the appetizers and desserts are the most unique parts of a meal because they are more creative than the entrées.

The first thing that we shared was the Fish Tacos!  You can (mostly) never go wrong with fish tacos. 🙂  They were pretty good and fresh! 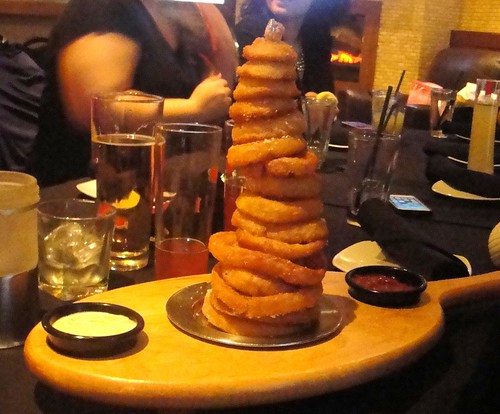 Next, we had a huge tower of onion rings!  These beer battered onion rings were also very yummy and perfectly fried and crispy!  I liked the sauce that came with the tower too.  It’s definitely an appetizer to share since I think someone would get really sick (and fat) from ingesting this entire tower by oneself!

I chose the Crispy Chicken Bites for myself as an appetizer and I have to say that I was fairly disappointed with it.  I chose Cajun sauce and expected it to be a little salty and spicy.  However, it ended up being mostly just dry chicken pieces with barely any flavour.  They were bland-tasting.  The buttermilk rank dip only helped the flavour a little bit.  Boo. 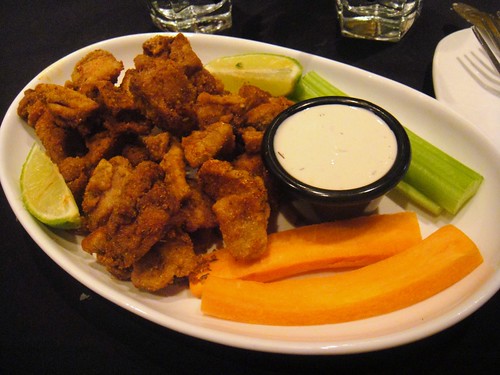 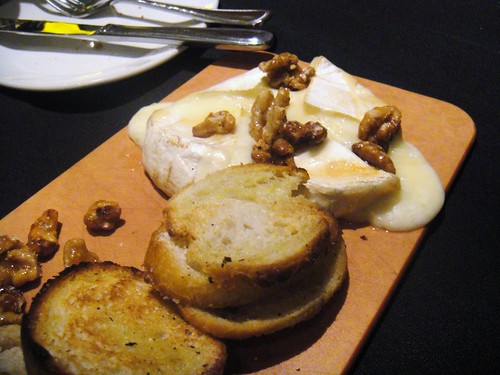 Some of the other girls in our party ordered the Maple Baked Brie.  Good thing we’re all fans of cheese because the moment we saw their order arrive on the table and heard from the girls about how delicious it tasted, we quickly ordered one for our side of the table to share too.  It was definitely a fantastic choice!  The Brie arrived in a big round sphere and was baked to the point when it melted completely and was oozing out the sides.  Mmm!  It smelled incredible! 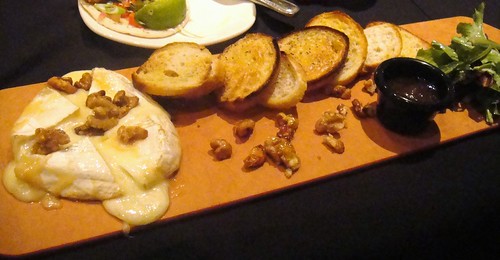 To eat it, we cut a bit of the Brie and slapped it on a crostini.  We smeared Bourbon apple jam on it, sprinkled a honey coated walnut on it, and crunched away.  It was sooo delicious!  It was a perfect blend of salty and sweet.  I highly recommend this dish. 🙂 The crisp greens on the side were a nice touch too. 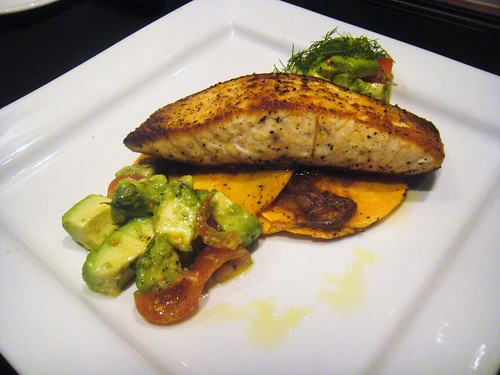 I tried a bite of the Organic Salmon that Kim and Val ordered and I was very impressed with how juicy and tender the salmon was!  A lot of restaurants tend to overcook salmon and that’s why I’m always fearful of ordering salmon at a restaurant.  The tomato avocado salad looked delicious!

Lastly, we finished off with some dessert even though we were all very full by this point.  We shared desserts too!

Val and I shared the Flourless Chocolate Lava Cake.  After redeeming my opinion of flourless chocolate cakes at Reds Wine Tavern and believing that they can be delicious after all (I didn’t enjoy the flourless ones I had at The Rosedale Diner nor at Richmond Station), I once again understand that flourless cakes can be a hit or miss. 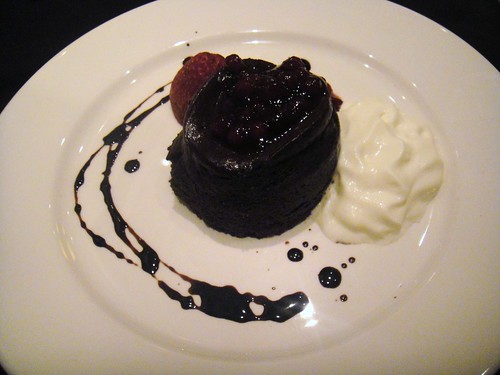 This Flourless Chocolate Lava Cake was very rich and dense.  Due to the lack of flour in the recipe though, it felt very mushy and didn’t taste very good.  It lacked a good “cake” texture.  Also, even though it was called a lava cake, I didn’t find an eruption of jam-y goodness in the centre of the cake like you would expect.  Instead, the whole cake itself was all mushy and dense throughout.  It was ehhh.

Kim ordered two scoops of tiramisu gelato and one scoop of mango gelato.  I really liked the mango one!  It was refreshing. 🙂 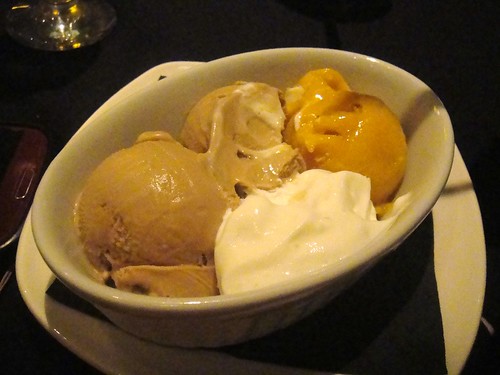 The food at West 50 Pourhouse & Grille was not bad for the most part.  There were some hits with the onion rings and baked brie appetizer, but I didn’t like the dry chicken bites or the lava cake.  Also,  I was really unimpressed with their service at one point because one of our party members had her dining requests denied several times.  This was due to the kitchen not having mashed potatoes, the server taking a really long time to deliver a diet coke to her, forgetting her order after already having to change it since they didn’t have mashed potatoes, and lastly, how they only had one Big Chocolate Chip Cookie dessert left and it was going to be reserved for the bride-to-be.   It meant that our poor friend didn’t get so many of what she wanted to order in one night.  It was really unfortunate.  The part that left a bad taste in my mouth wasn’t that the kitchen didn’t have all these things, but mostly how the server handled these problems and how her attitude could have been more professional.  In the end, they were able to find a Big Chocolate Chip Cookie dessert for her (no clue how) and they kind of redeemed their service points again.  They also redeemed themselves when they were able to split all the appetizers that we ordered into separate bills for us to pay easily.  However, maybe they could still better their services more by ensuring that their kitchen is stocked with enough ingredients for their guests on a Saturday night. 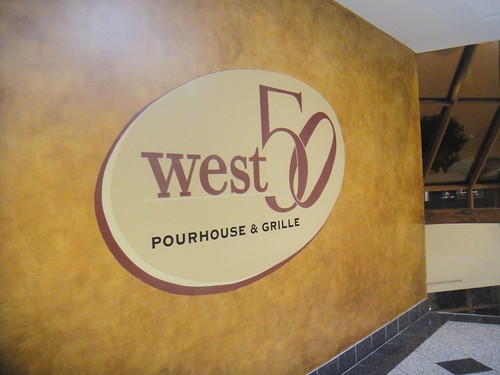 In any case, it was a great night of chatting and catching up with my friends.  The friendship and socializing parts of the night overshadowed the sub par service of the restaurant by FAR!  I also really liked how they had a live band and an open dance floor at the end of the night.  It’s a great place for parties indeed! 🙂