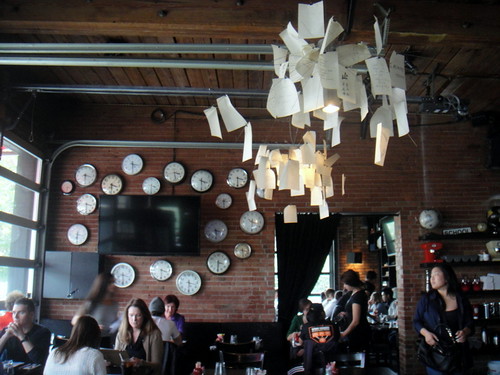 Located at 70 Fraser Ave. in Toronto

You know we’re serious about trying new restaurants and food when we venture all the way downtown on a weekday to try out School Restaurant which is located by subway and streetcar (you know those pesky streetcars that sometimes take forever to arrive?  — I’m just joking, Toronto).

The first time I remember distinctly being told about this place was from Blanca at Clar’s bachelorette party where we were sharing foodie recommendations.  She recommended this breakfast place and ever since then, I’ve remembered it when people talk about it.

Upon walking into the restaurant, I understood why the restaurant was called “School”.  It’s literally decorated with all school supplies and there are even hanging sheets of lined paper as light fixtures and schoolhouse clocks hanging on the wall.  On each table, there was also an apple (for the teacher!).  It was really cool.  Notice how the menus are all printed on lined paper and on a clipboard.  When it came time to get the bill, it was even placed in a small folder much like the ones that you receive your report card in.  It was so cute! 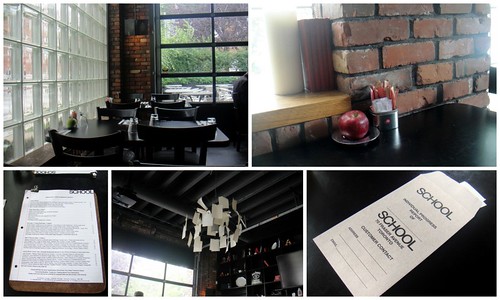 When Justin told me he wanted some breakfast food, this was the first place that I thought of to try.  I’ve never been here either so it was a good spot.  It was so trendy inside and the food was great!  We ordered our food based on what the table had next to us (social shopping/ordering is SO powerful!). 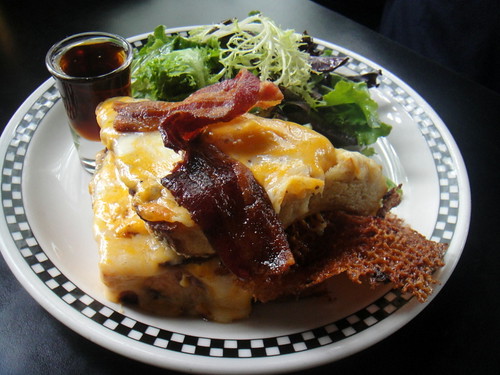 The picture of the Super Cheesy Bacon French Toast simply doesn’t do it justice.  The thing was HUGE!  The gooey cheese indeed covered all ever the French toast which had bacon on top of it.  It was very good but surprisingly plain in flavour. 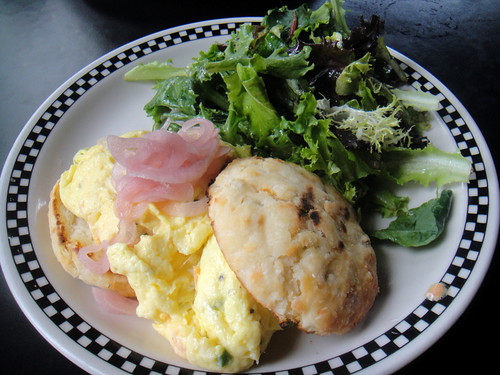 On the other hand, I’m really glad that I stuck with my choice because the Smoked Salmon Scramble with Cream Cheese didn’t look as amazing in comparison but the taste was so good!  The smoked salmon was scrambled so deliciously well with egg that it tasted amazing.  I really enjoyed it!  The salad on the side was a great compliment to the dish too. 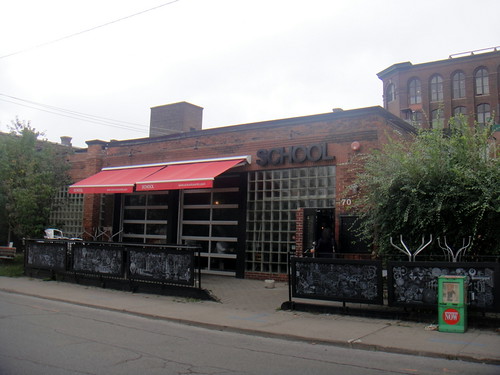 The fencing outside was full of pseudo chalkboard drawings!

I really enjoyed the atmosphere of this restaurant and the choices of food that they offer.  I’d love to return again to this casual and trendy restaurant to enjoy more of their food.  I hear that their chicken and waffle is really, really good! 🙂