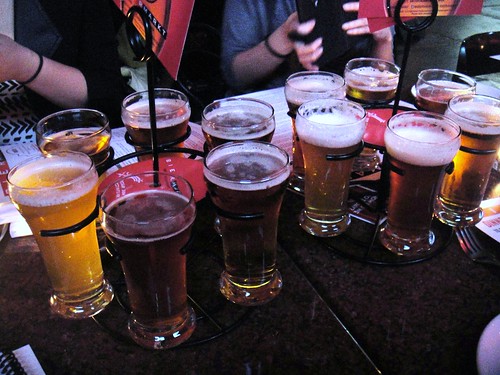 My dear friend Tracy celebrated her birthday at Bier Markt last weekend.  (Happy [post] birthday, Tracy!!!!)  I’ve never been to Bier Markt before even though they have a number of locations all across Toronto — this one, King West, the Esplanade, Don Mills, Queensway, and Square One.  From its name, you can tell that it specializes in beer and a lot of it! 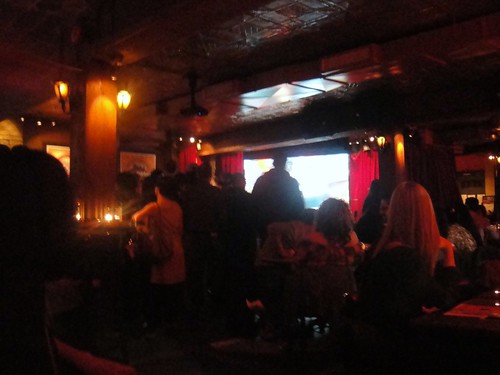 Normally, I am not a fan of places where it’s so loud that you can’t even hear the person next to you, but the din at this place was perfectly loud enough yet you were still able to converse with your tablemates

When we got there, the first thing I noticed was how dimly lit the place was (you’ll notice that the pictures are not very good as a result of the reddish and dim lighting).  It was small yet cozy area with a bar in the middle of the room.  There was also a huge screen where the basketball game was playing.  There were a lot of people already at 7 p.m. on a rainy and gloomy Friday.  From walking on King Street West where there was nobody on the sidewalks due to the drizzly weather, it was like walking into a giant party at Bier Markt due to the crowd and energy.

I was the first to arrive in our party of 11 and I spent some time looking at the menus to see what to order.  They have an entire booklet of different beers that you can order.  I was overwhelmed not only with the drinks but also with the food selections.  Everything looked so good!  Even as a foodie who likes to try different things and usually knows what to order at a glance, I was left scratching my head.  What to get?  There were so many options! 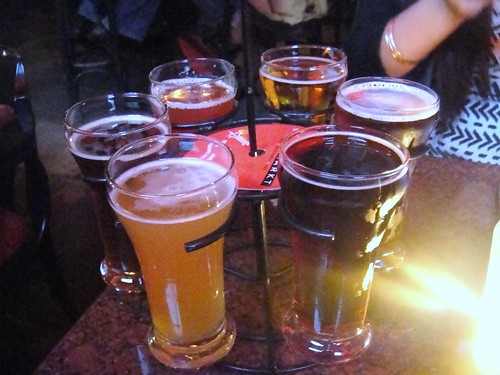 Soon, more people from our party arrived and Katherine suggested beer flights!  What are beer flights?  I had never heard of them before.  Apparently, they’re 4-6 glasses of small beers that you get all at once to taste.  It’s like your own little beer party for one person.  I’ve never tried it before, and hey, why not?  San, Katherine, and I got started with our individual beer flights.  When we ordered with the server, he actually assumed that we would be sharing one beer flight.  No way, we said!  We wanted our own!  He was surprised.  Shocked?

Nevertheless, our beer flights arrived and we cheersed each other before the birthday girl even arrived (sorry, Trace).  Katherine and I both chose the “Don’t Worry. Be Hoppy” beer flight while San opted for the “Sweet & Sour” one.  Hers was a better selection since the beers were distinctly different in flavour; for example, strawberry beer, grapefruit beer, etc.  The ones in our selection were tasted more like general “beer” flavours.  We had six 7 ounce-glasses of beers each.  The portion was a lot larger than I expected!  I hadn’t had this much beer in such a long time.  With no food in my stomach, I got tipsy quickly. :3

Before long, our table filled up not only with people, the birthday girl, but also with food!  We ended up ordering a bunch of things to share.  Here’s what we ordered: 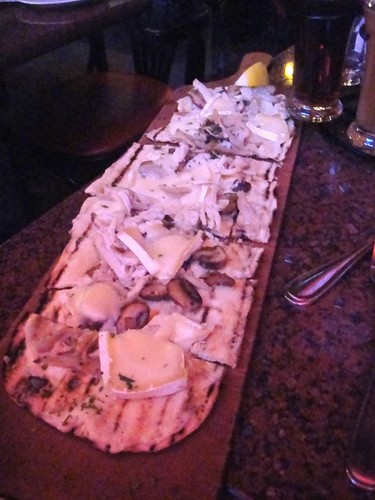 Bier Can Chicken Flammekueches (Tarte flambée):  This was delicious!  It was bier can chicken with big slices of brie cheese and roasted cremini mushrooms on top of a crunchy and thin bread dough (kind of like a flatbread).  It was tastier than I imagined and even tasted great when it got a little cold.  Yum!  The brie cheese and the chicken were so good!

Not only does Bier Markt do beer flights, they also do poutine tours!  (You can get a selection of three poutines called a “flight of all three”.)  We opted to share the Porter Bacon Poutine.  When it arrived, it was covered with crème fraîche and gravy with lots of Porter and expresso candied bacon on top of the fries.  It was so good!  I really liked the bacon pieces.  The Quebec cheese curds were good too!  What a great poutine it was!  Delicious. 🙂 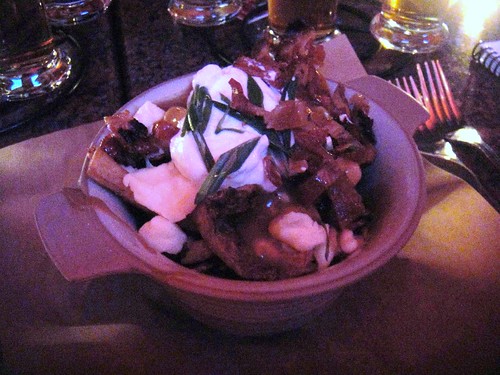 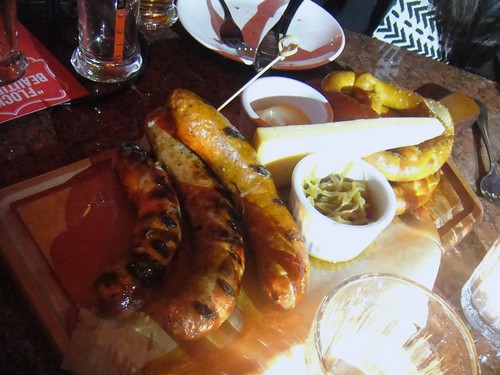 Lastly, we ordered a Wurst Board to share.  The big board came with smoked Gouda cheese, house mustard, onion jam, Markt pickle jar, and a Bavarian pretzel.  We chose three types of wurst:  Chorizo, Maple Walnut, and Jalapeno & Cheese Curd.

Yum!  The Maple Walnut wurst was unexpectedly good!  You could actually taste pieces of walnut in the sausage.  I also really enjoyed the smoked Gouda cheese.  It was so soft and savory.  Mmm!  The onion jam was interesting and there was a generous portion of the Bavarian pretzel.  We were filling up our stomachs by this point with lots of food and beer!

The rest of our table ordered oysters, risotto, burgers, and also poutine.  All of the food was good.  No one had any complaints.  I tried some of the risotto and I liked that too! 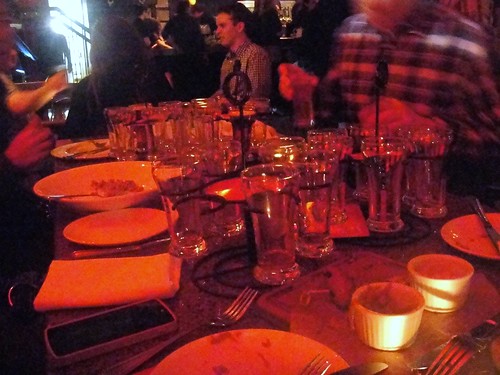 Our empty beer glasses by the end of the night

I have to say that this night was really enjoyable.  I loved how the atmosphere, even if a little noisy and loud at times made it difficult to hear each other, gave it such a party and energetic atmosphere.  It’s definitely a great venue for a party and to watch a game (people were cheering for the basketball game in the background too).  I loved it!  After the game was over, they even had a live band playing!  The food and beers were incredible. 🙂  Nothing was bad; service was great, everything tasted great!