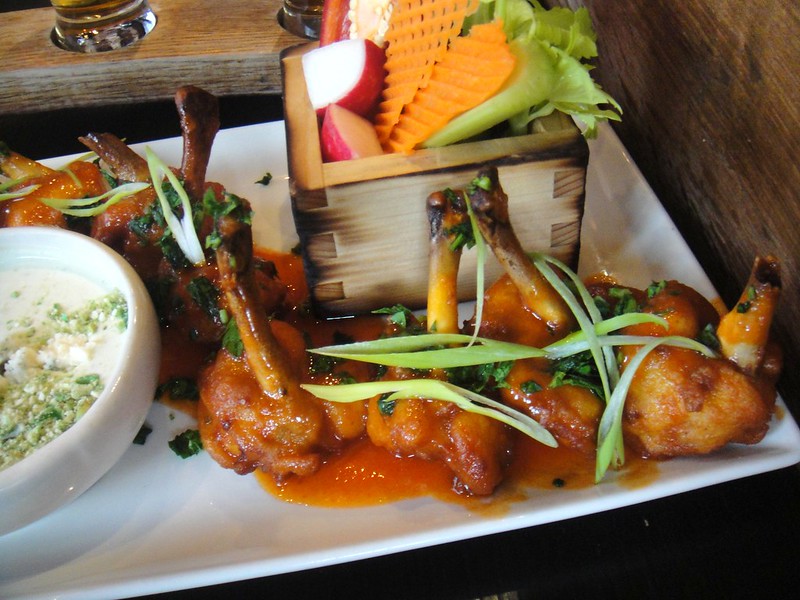 It was our last night in Vegas!  I was going to miss it; all the good food, the energy, the sparse yet comfortable crowds, the dry heat, all the new things I got to see — we had to make the most of our last night!

Vivian and I were checking online at the Venetian (yay free wifi) to see which restaurants would be good enough for our last meal in Vegas before we jetted back home.  We wanted something not too heavy and shareable and affordable.  After stumbling by a few restaurants, we were running out of time and decided to go back to our hotel to try out the Paris restaurant that was there.  On our way, we spotted Guy Fieri’s Kitchen + Bar restaurant which looked quite good and popped it.  The wait time was only 10 minutes which was reasonable as it was dinner time and who knows how long we would have had to wait if we continued walking back to Paris.  So we waited and chose what to order from the menu from the time the hostess called us to our table to when we actually got there. 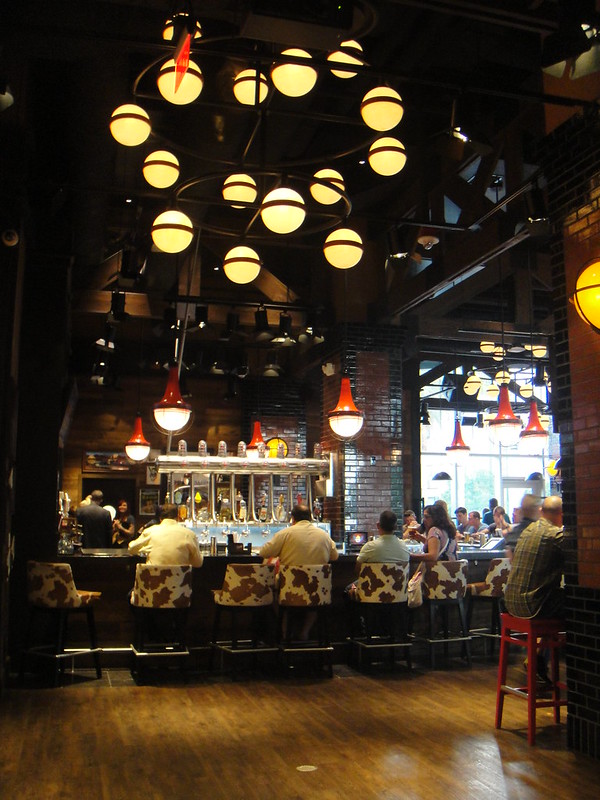 What a beautiful entrance to the restaurant

Turns out that a lot of the design elements in the restaurant, napkins, dishware are based on Guy Fieri’s actual body tattoos!

We ordered a number of great items!  We were both very pleased and pleasantly surprised that we stumbled on such a jewel of a restaurant.  Hehe.  It worked out perfectly.  We ordered a beer flight (which turned out into two flights), sashimi-won tacos, one-boned chicken wings, and the most interesting yet delicious dessert I’ve had most recently.  Here goes:

The first flight of beers that we ordered, we asked for recommendations from our server.  There seemed to be a whole list of very good beers, so we ended up choosing several.  Too bad I really don’t remember what the four beers we started off with were… maybe in the future, restaurants can put a little label or symbol on the beers so we know which is which (foodie bloggers can dream, right?). 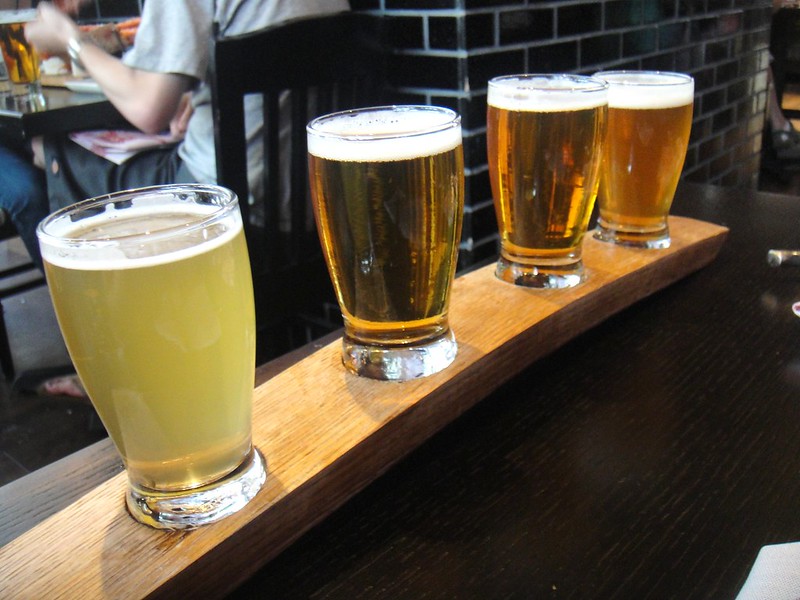 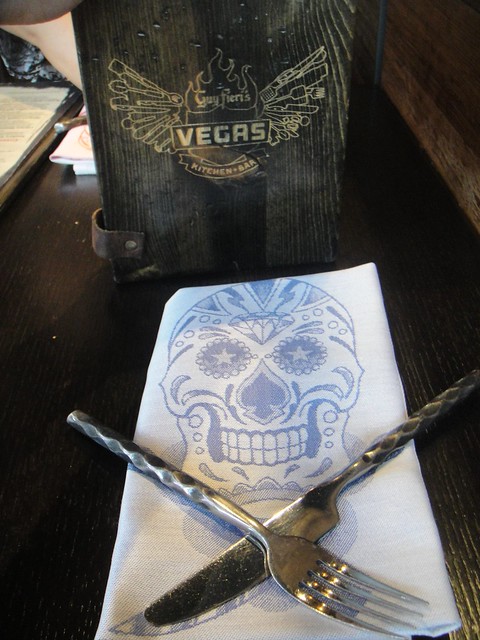 The beers were all pretty good.  They were so good that I accidentally ended up knocking one of them over and spilling the contents on the floor.  Good thing I caught the glass in time so it didn’t hit the floor and break.  Another server who saw this was so gracious who clean it up for us and refill the glass that I knocked off.  So nice!

Our sashimi-won tacos arrived.  Both Vivian and I were attracted to this shareable since it was unique and all true foodies love anything that’s different and that you can’t order anywhere else.  The sashimi were cut into small cubes and served with mango-jicama salsa in a wonton taco shell.  There was a small hint of “wow-sabi” cream in it too that was a little spicy.  It was a good serving of finger food. 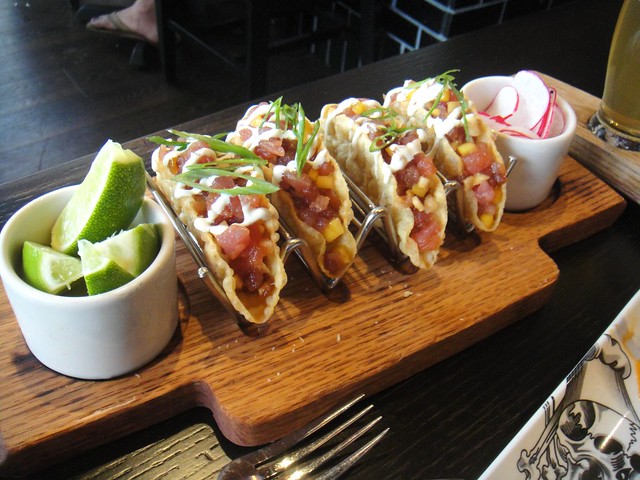 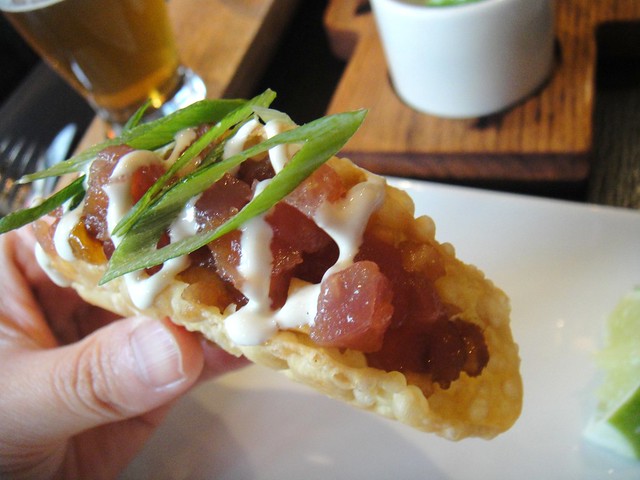 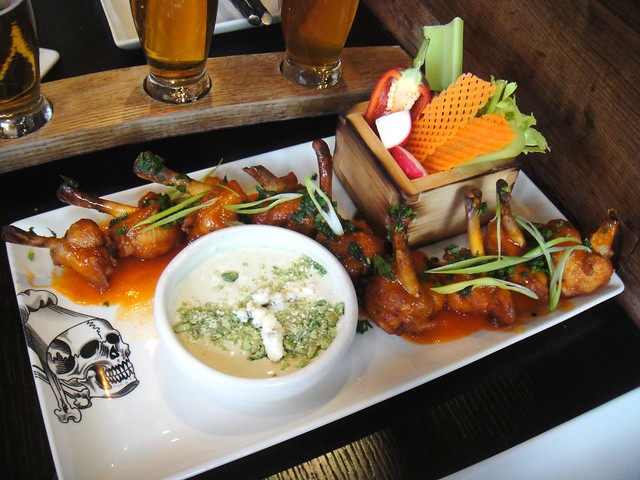 Fireball Whisky Wings. $15
-these wings are certainly not for the faint of heart & should probably be illegal. Classic buffalo sauce & fireball whisky meet to ignite a flavor explosion of epic proportions. Try Guy’s blue-sabi sauce to put out the fire!

I really enjoyed this next dish since it looked so foreign and because the cheese dipping (called “blue-sabi sauce”) was SO creamy and perfect.  These wings were called “Fireball Whisky Wings”.  All of their chicken wings are uniquely prepped; they are “trimmed into ‘lollipops'” for easy eating.  What an idea!  Our flavour of wings were a mix between buffalo sauce and fireball whisky.  They tasted a little spicy but the “blue-sabi sauce” toned down the spice.  I really enjoyed this.  I especially loved the dip.  Look at how they peeled the carrots too. 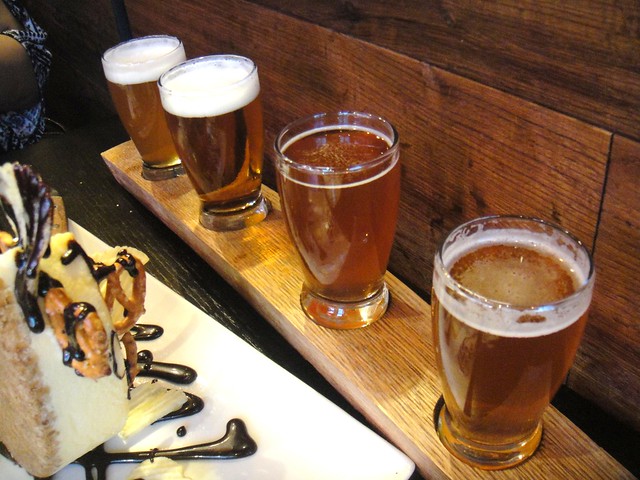 After this, we ordered our second flight of beer.  Unfortunately, I also don’t remember what beers we ordered.  This time, we trusted the taste of our server and let her pick the beers for us.  They were just as good as the first flight.  (This time, we also placed the flight inside on the table near the wall… for fear I would knock over a glass again… haha).

We ended our meal with dessert.  We had to try this once we saw that “Guy’s Cheesecake Challenge” was a huge mountain of cheesecake topped with potato chips,
pretzels, and hot fudge.  What!  How do you even combine something sweet like a cheesecake with salty snacks such as chips and pretzels?  We had to try it even though the combination sounded so odd. 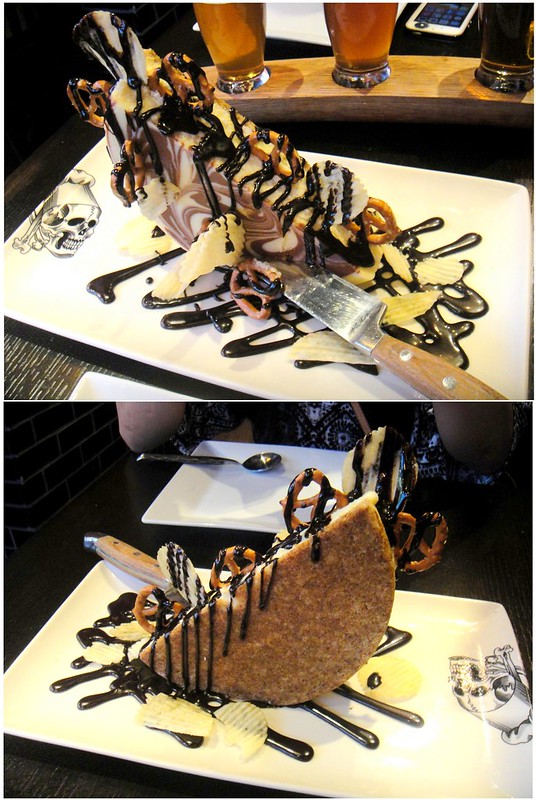 Guess what?  We loved it.  First of all, the cheesecake was perfectly made.  It just tasted perfect.  Secondly, the salty chips and pretzels added an incredible texture and flavouring to the cheesecake when you ate it all together.  It’s really not something I can describe in words; you have to try it for yourself.  The hot fudge that was drizzled on the whole dessert was SO dense and rich.  It was dark, dark black fudge and really good quality.  Man, we were so impressed.  Secondly, do you notice the size of this monster?  We were given half of an entire cheesecake for just $14!  What a deal!  I also can’t believe that we ended up finishing the entire half of the dessert with just two people.  The sharp knife really helped us cut it down and eat it slice by slice.

Looking back, I can’t believe we ate all that and had two rounds of beer flights.  Nevertheless, this was an incredible place for us to enjoy our last meal in Vegas before we headed to the airport towards home.  Man, I was so impressed and so was Vivian.  She said she was definitely coming back for more of the beer and food.  All the prices were very reasonable too!

Has anyone tried this place out before?  What did you think about it?  (And kudos to you if you read this entire review — I know it was quite detailed!)