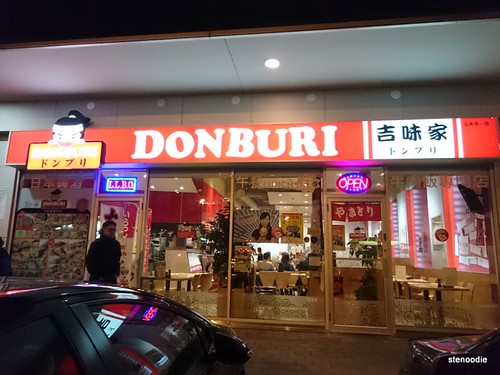 Located at 505 Highway 7 in Richmond Hill

Helen and I tried out Donburi.  It’s a Japanese chain that has restaurants all over the world.  It resembles another chain that is very prevalent in Hong Kong called Yoshinoya.  Its Chinese name is very similar to the one of Donburi (吉野家).  Perhaps it is a copycat restaurant (or vice versa)?  The food that they serve is the same.  Donburi specializes in servings of Japanese curry, cutlets, japas (Japanese tapas), chicken rice bowls, and they also have polar beer which I find fascinating!

Donburi is located in the Commerce Gate plaza on Highway 7 and was very quiet when we arrived at 7 p.m. on a weeknight.  I was very pleasantly surprised to see how modern and nicely designed the restaurant was.  They had Japanese anime with English subtitles playing on both of their flat screen TVs with many of the servers ready to serve you in front of the nicely Japanese-style counter.  We recorded our orders on a piece of sheet before passing it to the server. 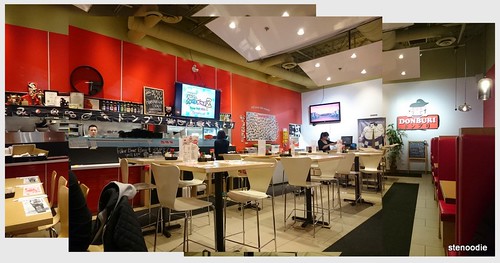 I liked how bright and clean it was in there. 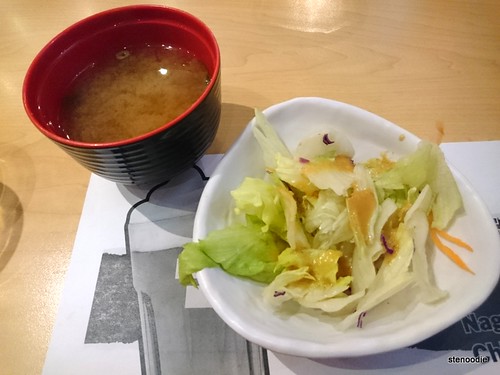 Our food arrived relatively quickly starting off with the miso soup and salad.  The salad was a bit dry (not enough flavourful dressing) but fresh.  The miso soup was a bit cloudy with many tiny square-shaped tofu pieces.

Helen’s Teppanyaki Chicken Don arrived first.  It was a smatter of teppanyaki chicken pieces on a bed of vegetables and cabbage on rice.  I tried a piece and wasn’t too impressed with the chicken.  Sorry! 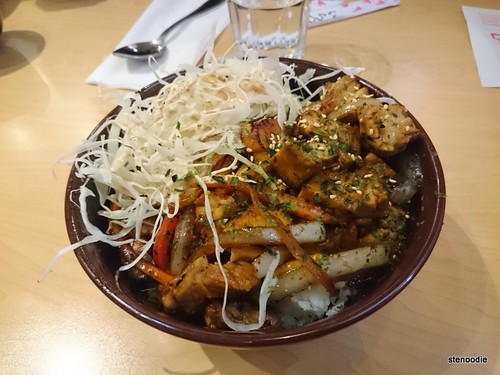 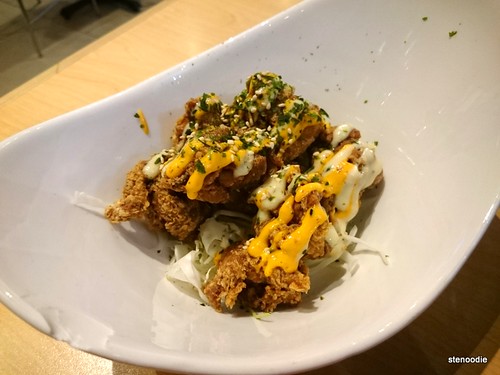 We ordered a side of Chicken Karaage since I am sucker for it and Helen recommended it based on her opinion of it on a previous visit.  It arrived in a curved and deep bowl.  It was fried to a hard crisp and the first piece of chicken karaage was really good.  Its light salty seasoning reminded me of the amazing fried chicken I had at Papa Chang’s.  However, the latter pieces weren’t as delicious and its outside was fried to a tough exterior. 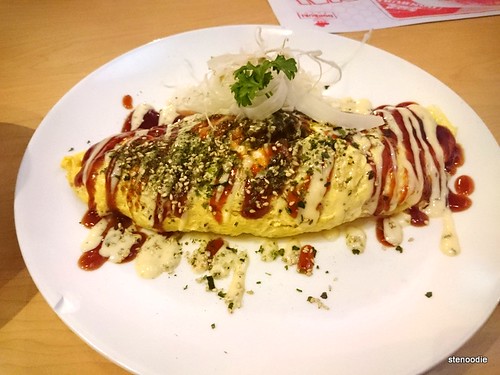 Chicken Omurice. $8
Chicken fried rice in a tomato base wrapped in a thin egg omelette

My Chicken Omurice arrived and I was happy to see that the dish actually resembled its photo in the menu — a rarity!  It is a blanket of scrambled egg wrapped around fried rice with chicken chunks and covered with Japanese mayonnaise and that tangy sauce that you see on okonomiyaki’s.  I loved how soft and just-cooked the egg was.  It wasn’t hard at all.  Delicious!  I used my spoon to dig into the chicken rice egg creation so that I had egg, rice, sauce, and chicken with each spoonful.  I really liked it!

Everything filled us up quite well and I was exclaiming how full I was.  However, we noticed that they did carry a dessert menu and ended up ordering a green tea crème brûlée.  Hehe.  It was only $2.50! 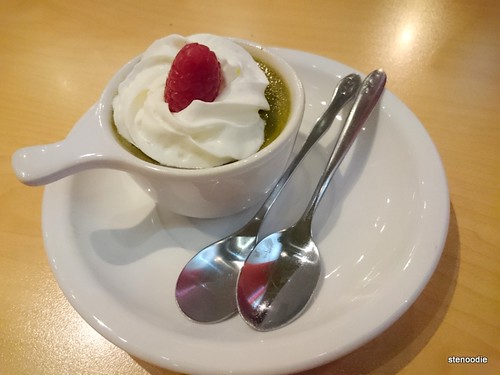 We expected its small serving size when it arrived and it was quite cute.  There was a raspberry on the top with whipped cream.  The only other green tea crème brûlée I can compare this to is the one I had at Yakitori Kintori (which was DELCIOUS!).  This green tea crème brûlée was yummy, tasted heavily of green tea flavour, and had a very thin and crispy glazed topping.  It was great for a truly tiny sweet dessert to finish off the night.

As I mentioned before, I noticed that they have polar beer at Donburi!  I saw someone ordering polar beer with that cute foamy beer top.  I already know that I’m going to return to Donburi because I want to try their curry rice, japas, and their wings with polar beer. ^_^  Hehe, I’m such a foodie. :3

April 20, 2018.  I finally found myself here again three years later.  XD.  Their menu has been updated since then (and prices have gone up).  They also don’t have the famed polar beer that I had wanted to try since the last visit.

We arrived around 7 p.m. on a Friday and upon arriving, I noticed that there was a booth table that was just clearing out.  Thus, me and my boo waited near the doors while the server cleared that table so that we could sit there (we were initially offered a non-booth table, but I wanted the booth one since those are more cozy and that’s why we opted to wait for it to be cleaned before we sat down). 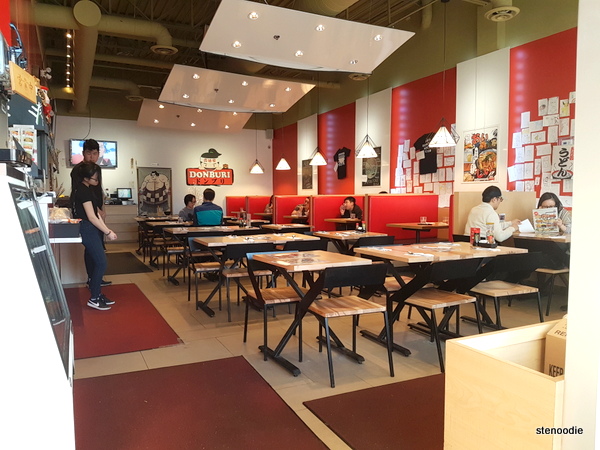 You see that empty booth table that was just about to be cleaned up?

At this time, another female customer arrived through the doors and this was just the moment that the server finished clearing the table.  Thus, the server gestured the female customer to sit at the booth that we were waiting for (she didn’t realize that we were waiting for the booth table all along).  I quickly signalled to another server because we had been waiting for that particular table.  The female customer was then asked to vacate and go back near the door where we were standing before she was asked to go to another available table.  I heard her saying “So confusing!”  I’m sure it must have been and it was such an awkward encounter for her.  We sat down at our table and didn’t look back at the customer to see what her reaction was. 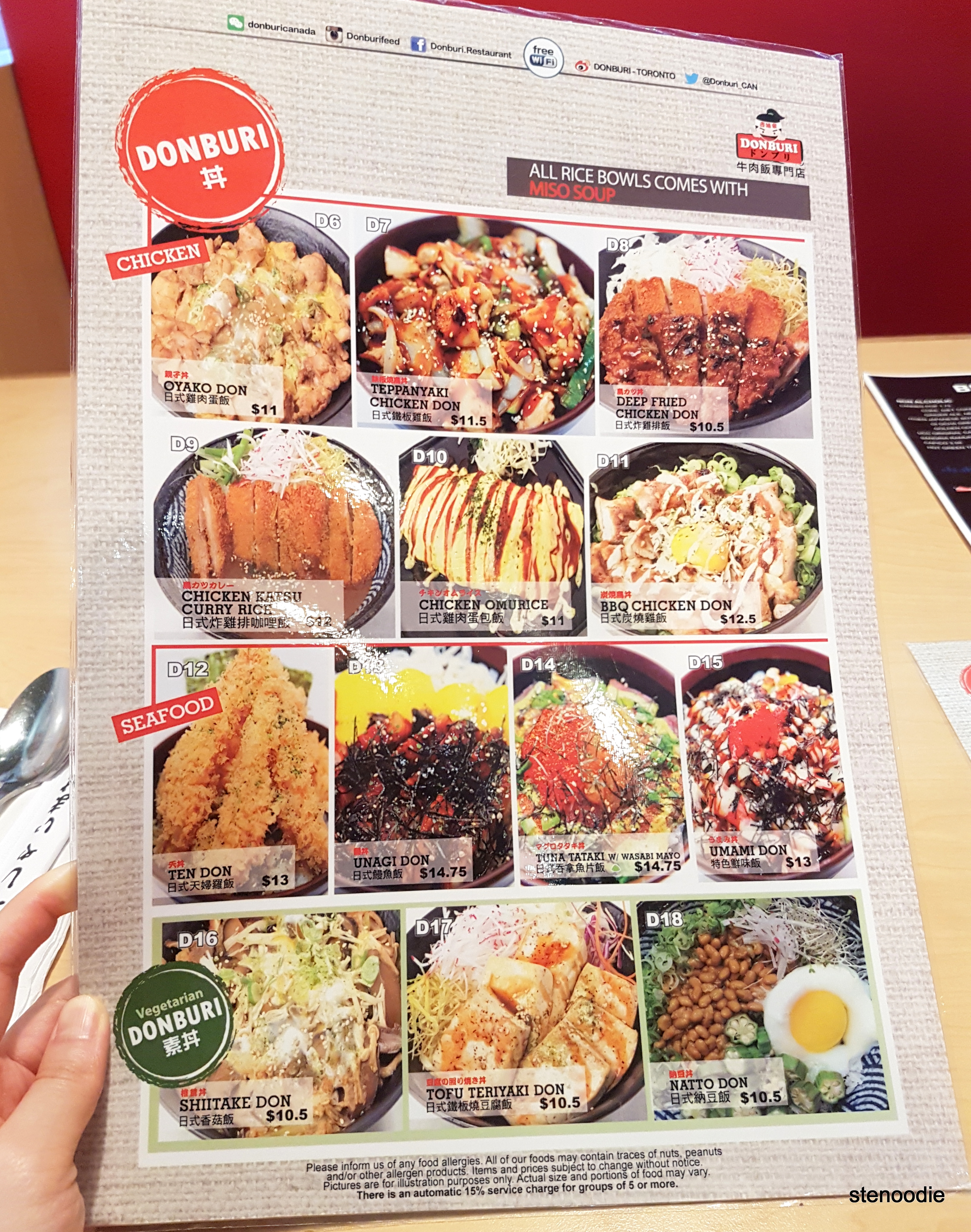 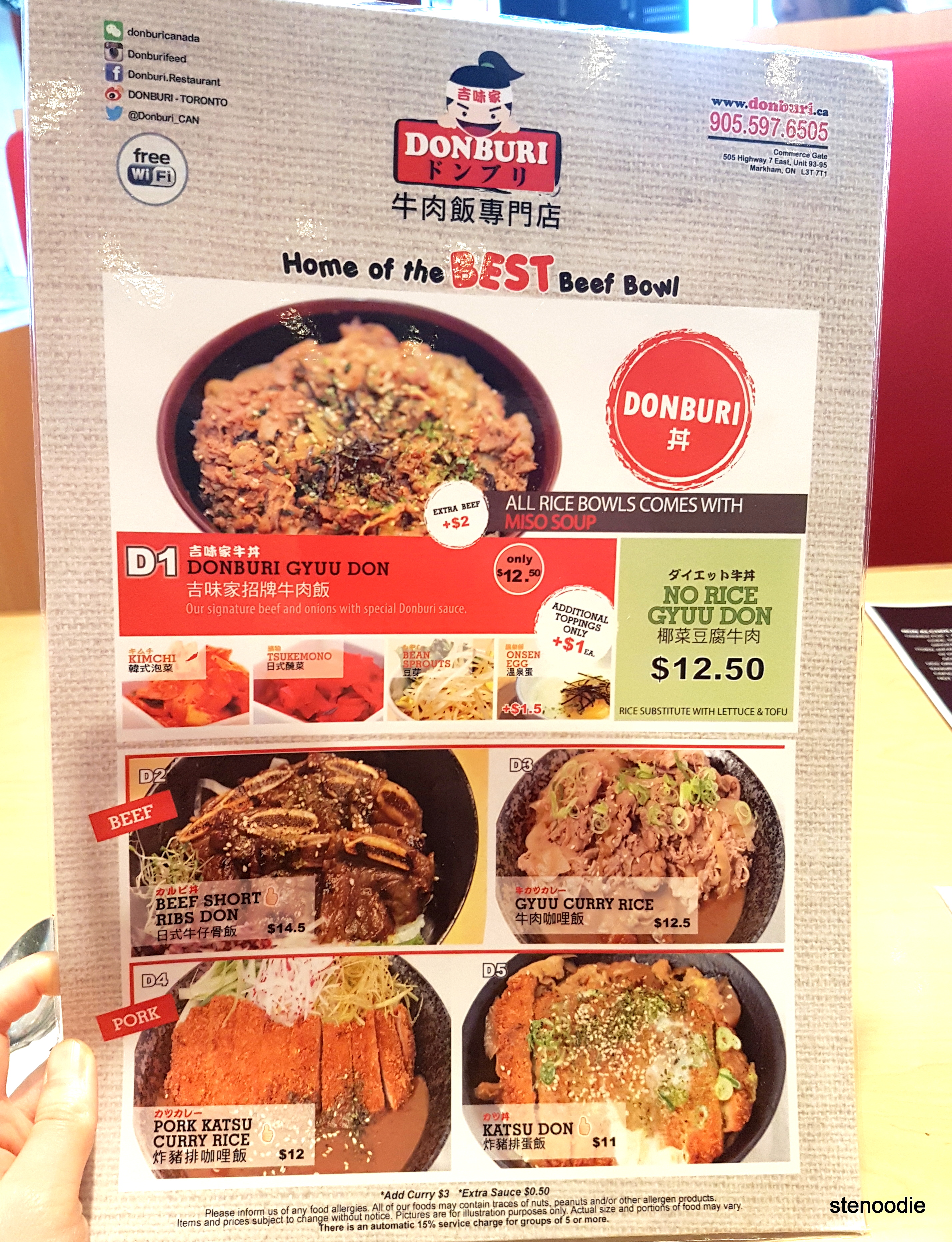 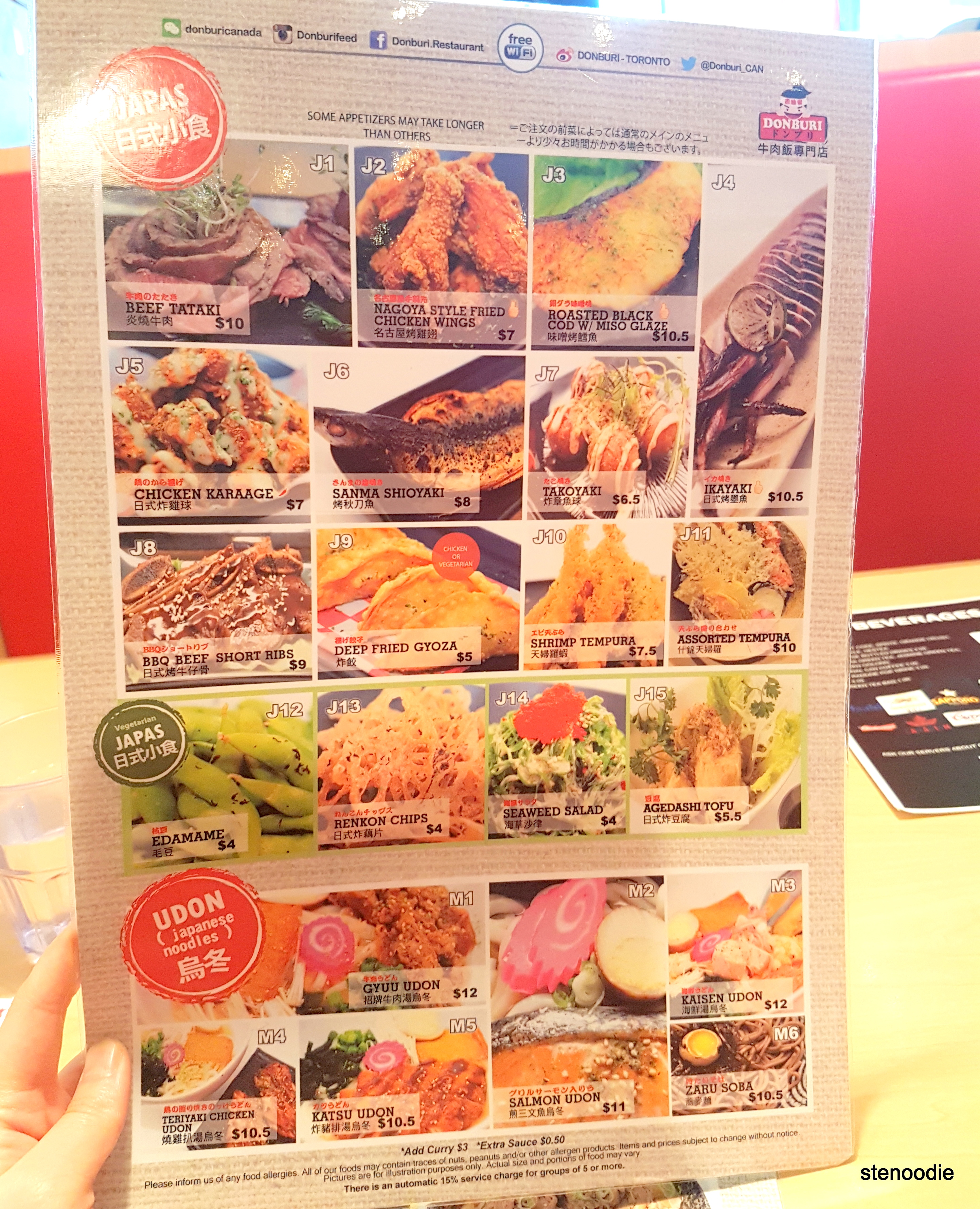 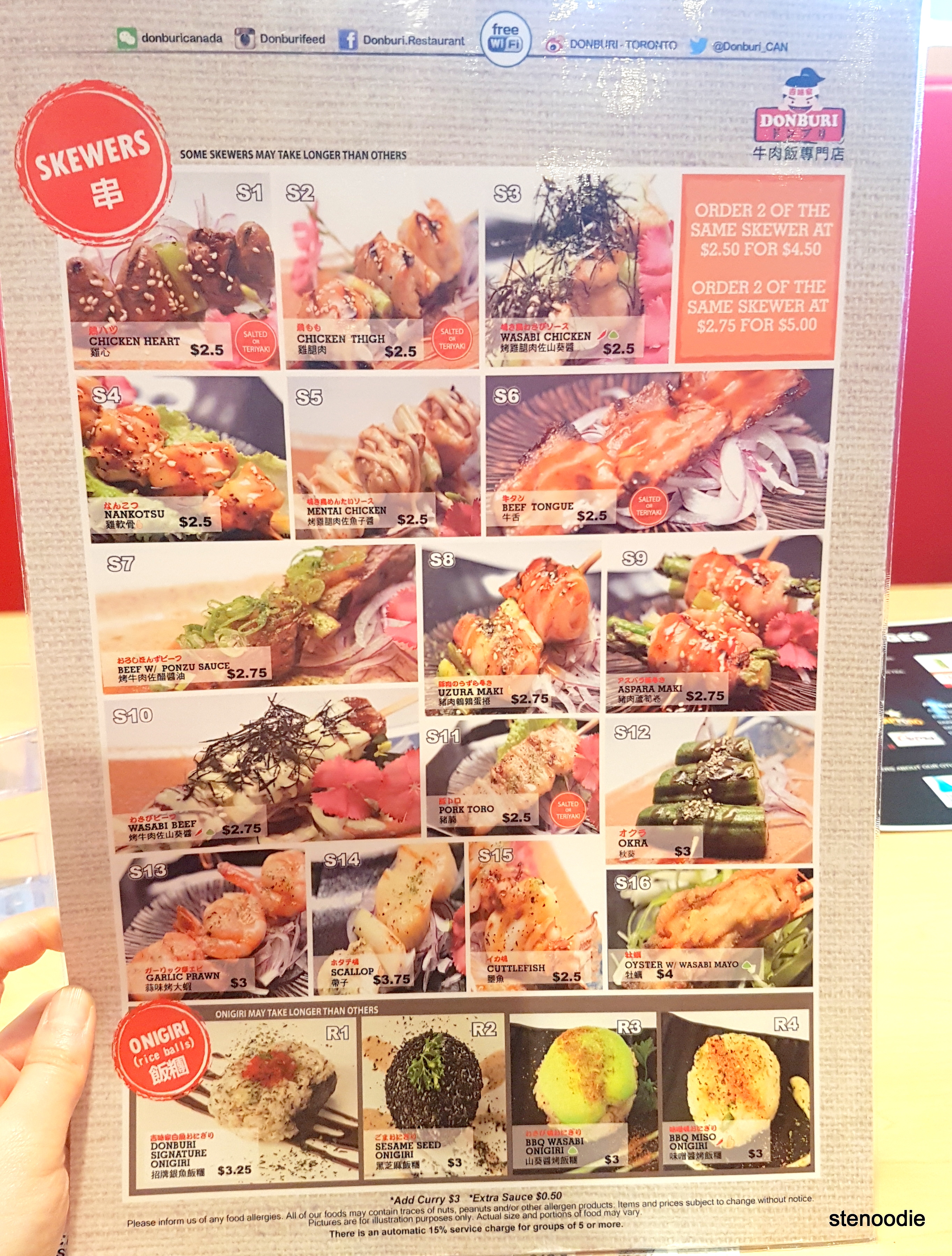 On this visit, we ordered a number of items to share.  All in all, we found their skewers to be so-so-.  One of them was actually cold.  I was surprised with the deliciousness of the rice ball.  Ultimately, it seems they are best known for their beef bowls which is what you should stick to because that tasted the best and also was the best value.  Also, don’t order the soba.  It was so lacking of flavour and didn’t taste good. 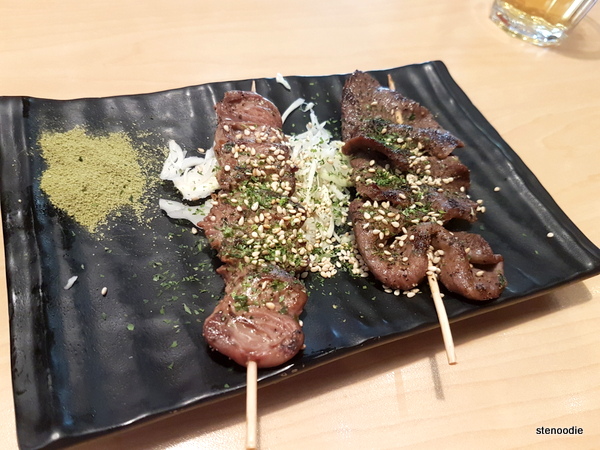 Chicken heart and beef tongue skewers, I believe. $2.50 each 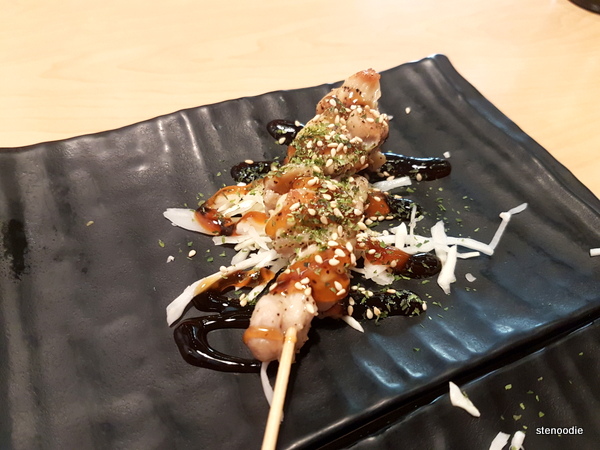 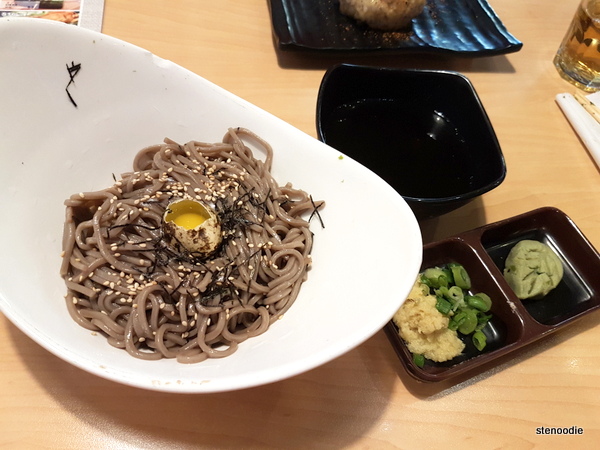 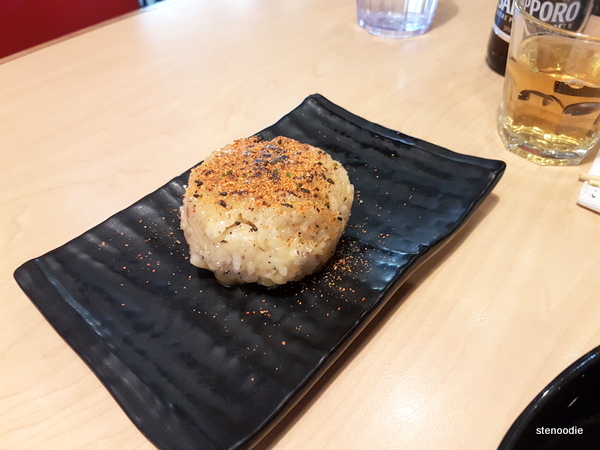 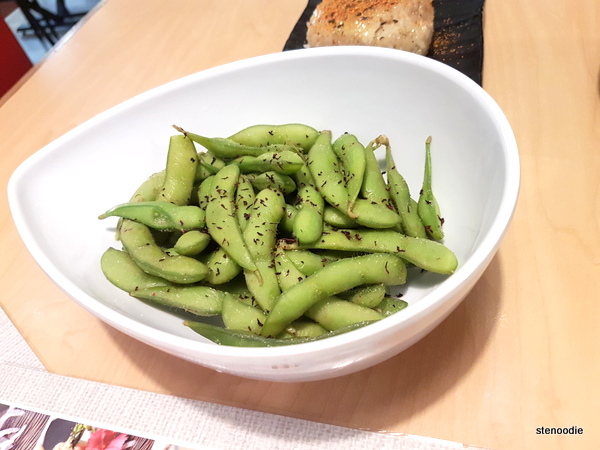 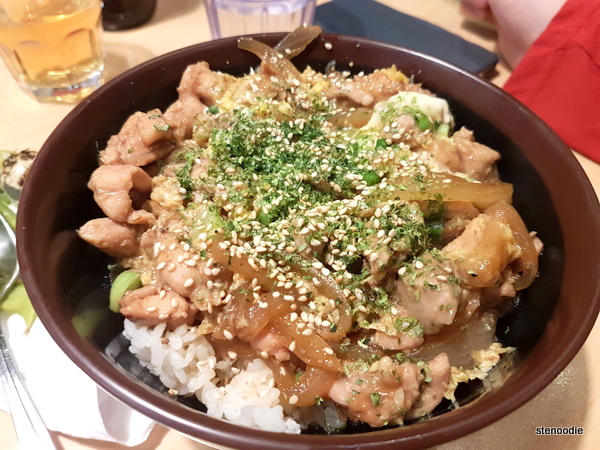 Also, by checking in on Yelp, we got a free scoop of ice cream! 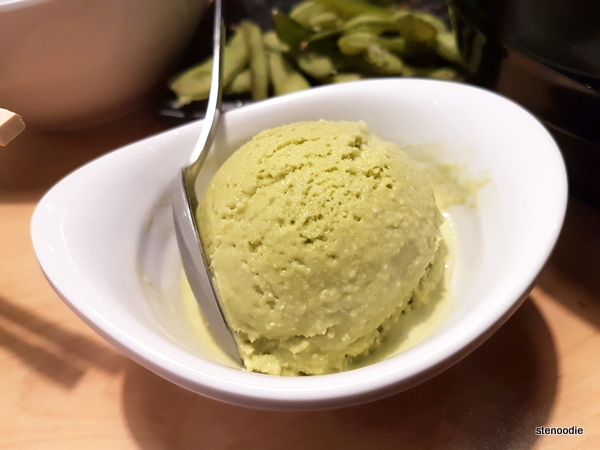