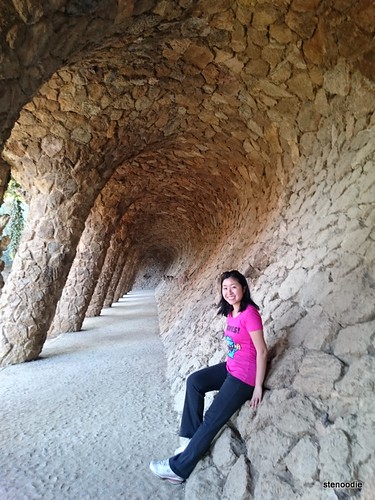 me in Park Güell

Yay!  Travel series!  I haven’t done one of these in a while, so this post will recount the activities that stood out to me when I was travelling in October 2014 to Spain and Portugal.  First stop:  Barcelona!

We departed from the airport gates from Hong Kong as a group of 11 on October.  We were touring with a Chinese tour group which meant that all of our itinerary for the 10-day tip was planned meticulously from where we visited, stayed, and ate.  It’s not a bad deal at all and very affordable and you don’t have to worry about any of the travel details.  The down side is that you cannot stay in a place for longer than you want since we have to move along like sheep.  That comes to my point that even before this travel series to Spain has started that I absolutely can’t wait to return back to Spain again because I loved it there!  I need to experience it more fully the next time I’m there. 🙂 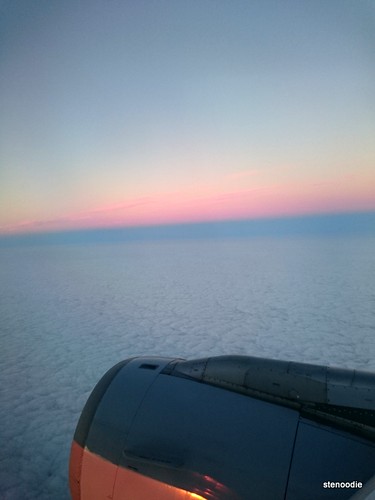 So, as I was saying, we left from Hong Kong on October 28th enroute to Frankurt, Germany where we would be doing a layover into Barcelona.  The flight was more than 10 hours and I used that time to sleep and read.  It was my very first time on a German plane, Lufthansa, and I noticed that all of their flight attendants are really rude and not friendly like how most attendants should be.  It wasn’t only me that noticed that too.

When we landed in Barcelona, I was very excited!!  The weather here was perfect, a balmy yet summery autumn that reminded me of the ones in Canada.  It was not cold and not too hot.  Just perfect!  Our first day upon landing was packed! 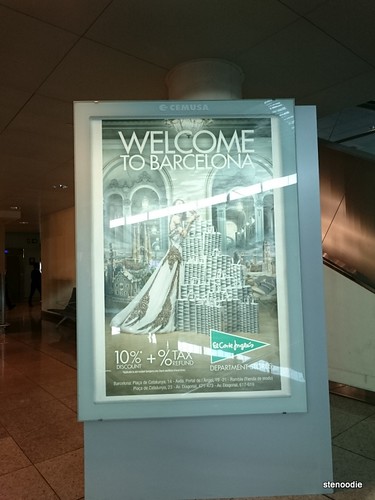 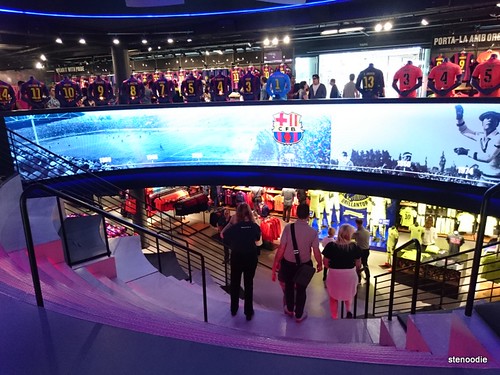 Cool design of the store 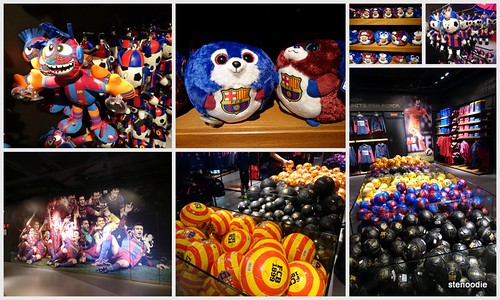 First, we visited the famous football site, FC Barcelona (Futbol Club Barcelona). I know nothing about football or sports so this was definitely an indulgence on my part to see the FCB store and take pictures with lots of Qatar jerseys, souvenirs, stuffed mascots, and balls.  Balls everywhere!  XD 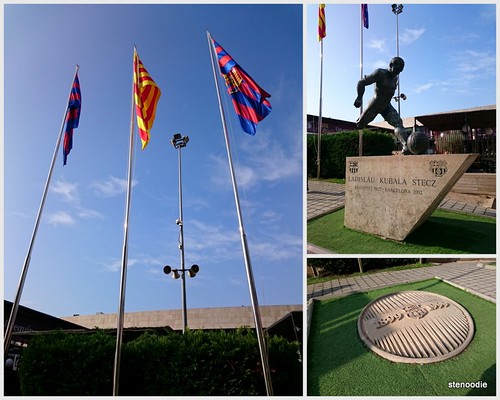 More of the FCB

Sitting on the window seat of the tour bus, I was able to gleam a lot of the Barcelona city — a city tour, if you will.  I immediately loved the architecture of their buildings and streets!  It was so beautiful.  More on this later. 🙂 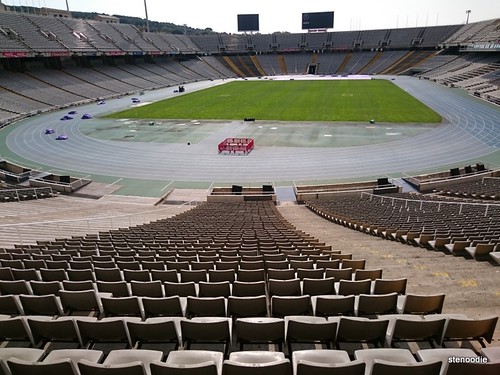 Next up, we visited another sports facility, kind of.  We visited the site of the 1992 Summer Olympic Games, which is apparently in Barcelona!  Cool!  It reminded me of the Bird’s Nest site that we visited in Beijing, China.  They both kind of look the same.

Back on the bus, and I am just LOVING these streets of Barcelona.  Can their buildings get any more elegant and beautiful? ❤ 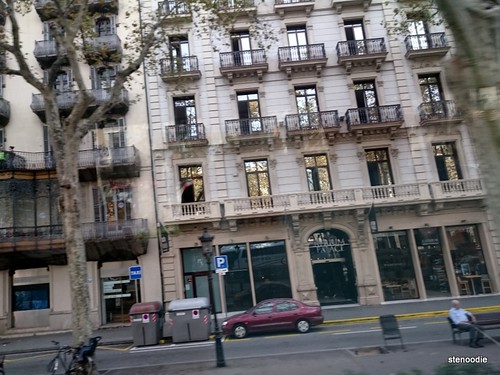 Snapping these shots from the moving bus 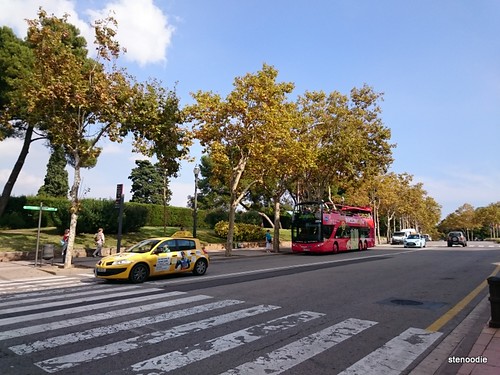 Autumn in Spain. What a beauty 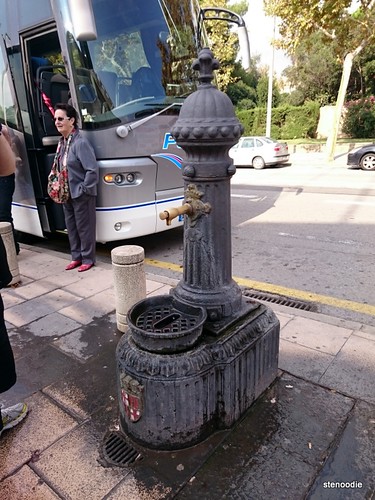 It was time for lunch.  For lunch, we had an “authentic” Spanish meal.  Yay!  The foodie inside of me was crying for joy.  I couldn’t wait to eat and try food in Spain!  Of course, as with Chinese tours, the food is catered and you can’t expect too much.  For lunch, we had bread with tomatoes (a Spanish classic), some rolls with cured ham, frank and beans with fries, and crème brûlée!   We also had our first glass of sangria!  Not bad for a first meal.  We ate at a restaurant called Neoclassic Restaurant (resident foodie must report where we ate and address if possible XD). 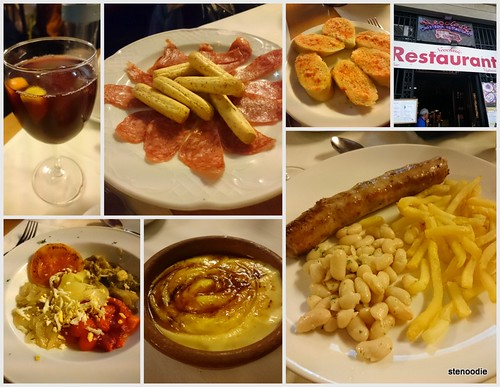 I really enjoyed the cured ham and sangria.  The frank and beans were so-so.  I really loved the crème brûlée.  Heh.  My relatives and most of the other tour groupies were not impressed though.  Being HK folk, they are not used to just fries and dry meat like this as a meal.  I was happy with everything though. 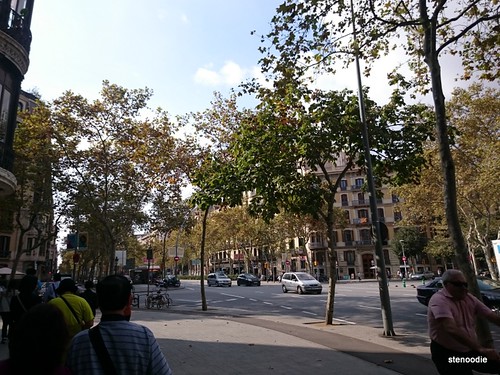 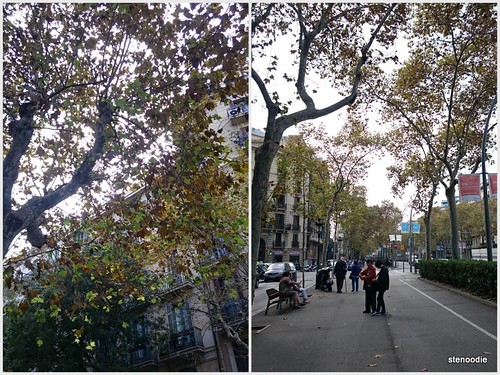 I love these Spanish trees!! 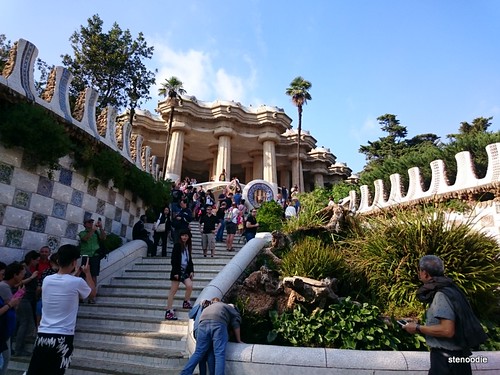 After lunch, I admired the beautiful trees and Barcelona streets some more and then we hopped on the bus to our next destination.  Wow, I was so impressed with this next tourist attraction.  It’s one of the really well-known sites in Barcelona on Carmel Hill called Park Güell.  It’s a “public park system composed of gardens and architectonic elements” and “built between 1900 and 1914 and was officially opened as a public park in 1926.  In 1984, UNESCO declared the park a World Heritage Site under “Works of Antoni Gaudí” (thanks wikipedia). 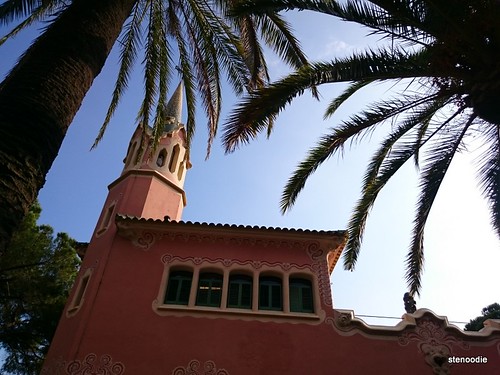 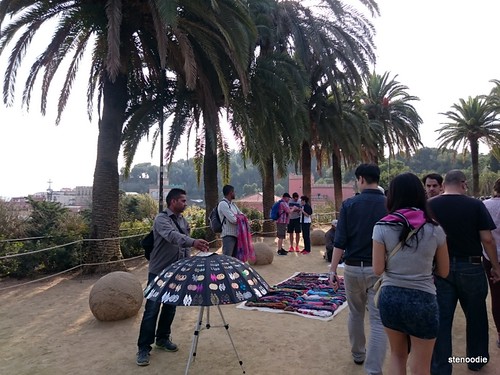 So creative how these merchants sell their jewelry on standing umbrellas 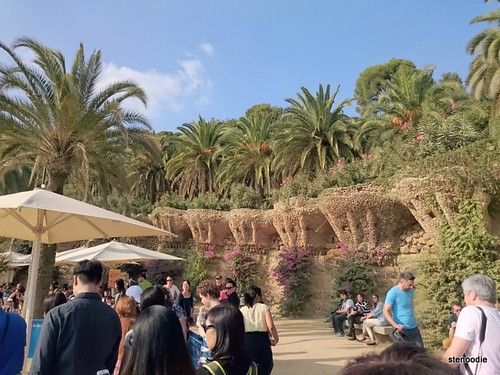 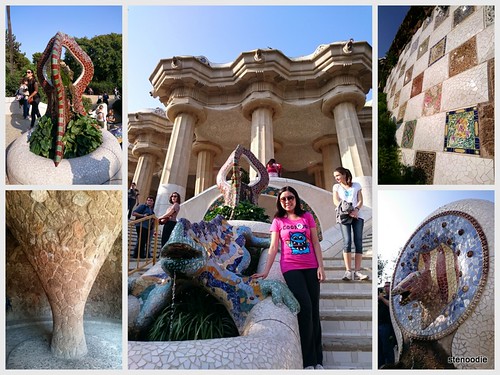 Many great pictures that I took! 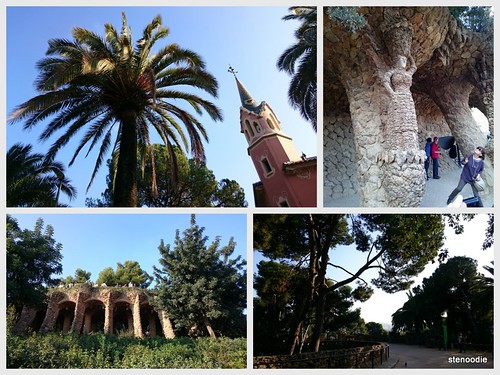 Perfect weather. Portico of the Washerwoman on the top right

It was perfect summer weather and there were many, many tourists walking around taking pictures and enjoying the scenery.  It was beautiful inside.  It was definitely something I’d never seen before and I took many, many, many pictures. : ) 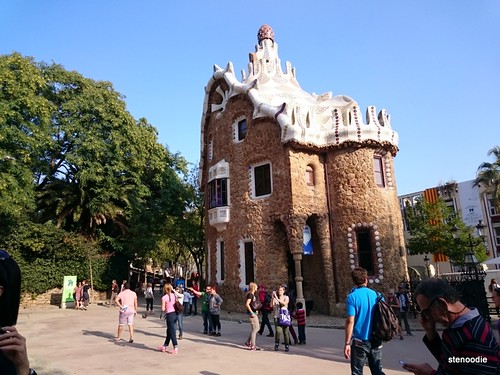 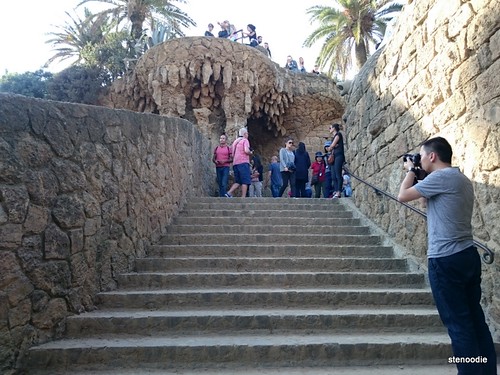 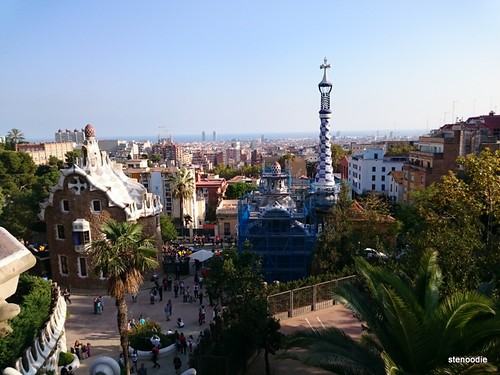 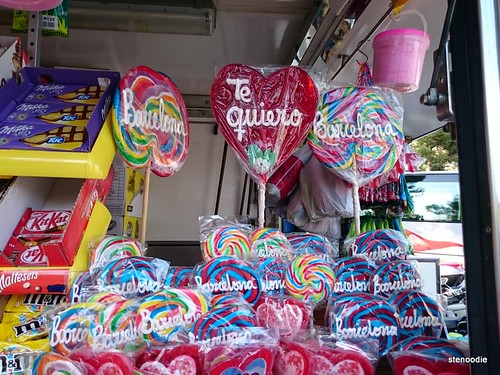 Saw lots of these gigantic lollipops as souvenirs 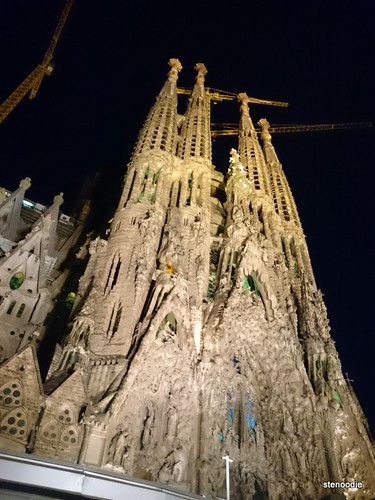 After an hour or so at this beautiful park, we were ushered off to another site.  We arrived in the city and walked to see this beautiful church that was undergoing renovations.  Sagrada Família is unfinished and is designed by Antoni Gaudí.  The details engraved on the exterior of the church was more than spectacular and you have to see it with your own eyes to take it all in.  My camera definitely was not able to zoom in to capture all of the details. 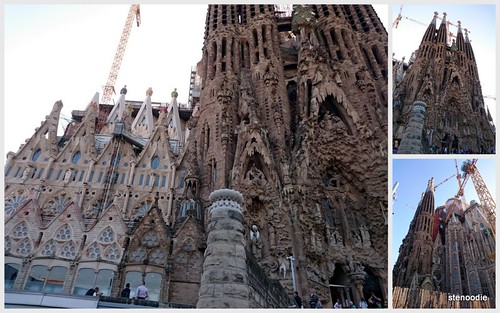 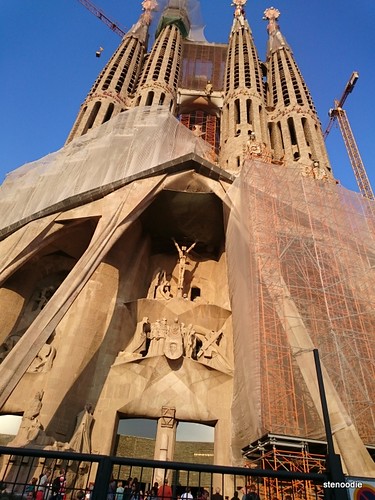 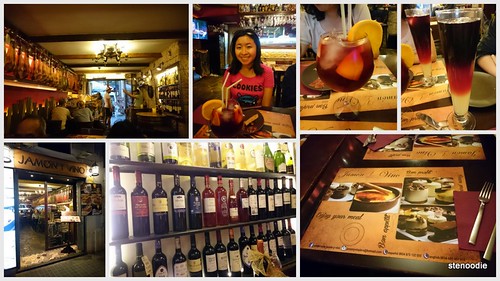 We had a lot of time around this area to explore as it was intended for you to also go into the church to have a look-see if you desired.  We walked around the neighborhood as the sun was starting to set, visited lots of souvenir shops, and ended up in a little restaurant called Jamon Y Vino for a little pre-dinner “snack”.  This restaurant caught my attention because I saw that they were advertising paella and it was my goal to eat paella while in Spain.  We marched in, ordered some seafood paella to share, and along with some bread with tomatoes, jamón, and sangria.  This was a beautiful meal and I loved it all. 😀

You could watch them slice the jamón freshly too. 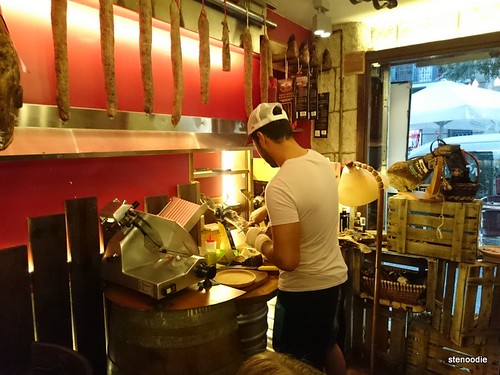 Later that night, before we returned to the hotel, the tour guide dropped us off at a Shanghai restaurant for dinner — Chinese food.  It was really bad tasting lol.  There’s no other way to put it.  Good thing we had had our little feast of Spanish food!   Oh, and the decor was old Shanghai-style.  Very pretty. 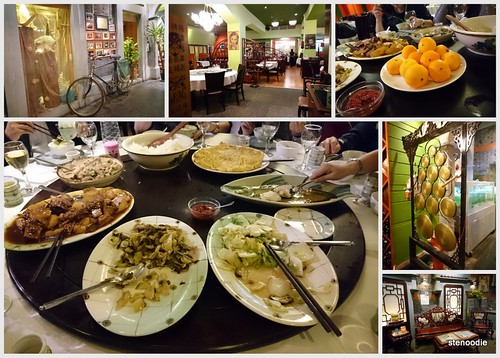 I can’t believe I did and saw so much in that first short day.  Onwards to Day 2!